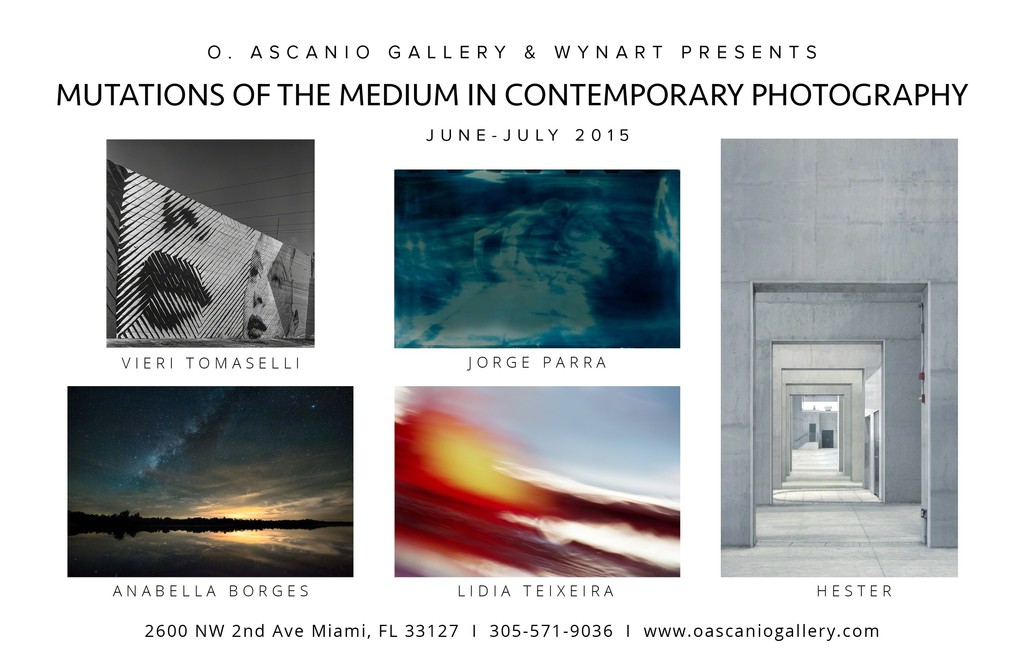 O. Ascanio Gallery & Wynart presents Mutations of a Medium in Contemporary Photography, a group exhibition on the work of Vieri Tomaselli, Anabella Jorge Zingg, Jorge Parra, Lidia Teixeira and Hester. It will run through the summer, starting at 7pm, Saturday June 11th, 2015 in our location in Wynwood, 2600 2nd Ave, Miami, FL 33127.

The variety of photographic practices distilled in this showcase reveals the diverse forms photography captures in time for us. The mutations of the medium allow a variety of explorations, each taken with similar machines but so subjective in essence. The photographers have assaulted the medium, by treating the process differently and irreverently, crossing boundaries and stretching them.

Jorge Parra’s “Chemo-Digital” process mixes darkroom techniques with digital processes. His experiments began twenty years ago and he believes will always be part of his practice. No single kind of photographic process is capable enough. Photography is expanded by the artist’s treatment of its technology. As a visual artist Parra is in search of beauty and his medium entreats him to its possibility.

Vieri Tomaselli’s documentary photographs are exhibited in 6x6 black and white film. Images of graffiti in Wynwood, the splendor of magnificent works of art, once donated to the Public but no loner visible. Painted over and lost forever; Vieri tells the story of lost masterpieces with the nostalgia present in black and white film, a form of the medium we might think of as abandoned. His process corresponds and might underscore his cataloguing of history. Though Vieri has taken approaching 5,000 photographs of Wynwood in color with digital cameras, the selection in his exhibition contains only black and white documentary Images of Wynwood taken between 2012 – 2015.

Anabella Borges Zingg almost erases the medium altogether. Though she might work a contrast in Photoshop, it is only to make the image look more like what she experienced in real life. In such paradoxical way, Borges Zingg manipulates the medium to fit her necessity. The photograph is an Image of Nature from her memory. Still, beyond the beauty that affects us in large format, her images show appreciation. Her photography is grandiose it inspires gratefulness for the majesty that Nature can superimpose on our soul. Anabella Borges Zingg triggers gratitude at the sight of splendor.

Along these images, Lidia Teixeira’s abstractions show traveling forms created by water and light. Teixeira unravels fluids interaction with light and wind. The emotional component of her photographs is expansive and intense. Fundamentally consistent but dynamic in behaviors, water, light and wind do not rest. We live a Spare Moment, Energy in Motion, and subtle waves of Kinetic Energy in color. In these images infinity is present.