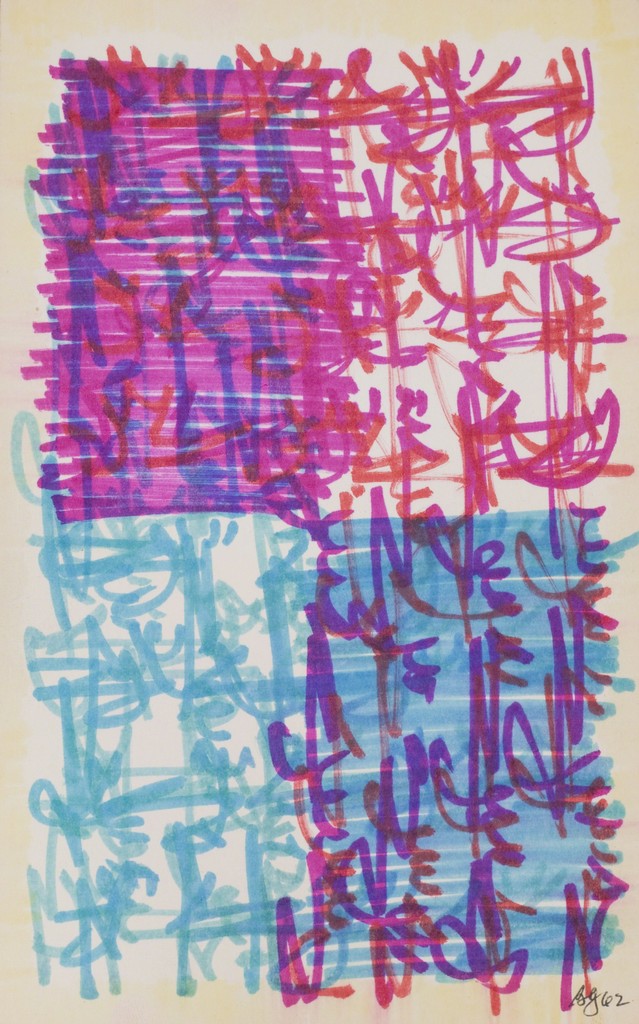 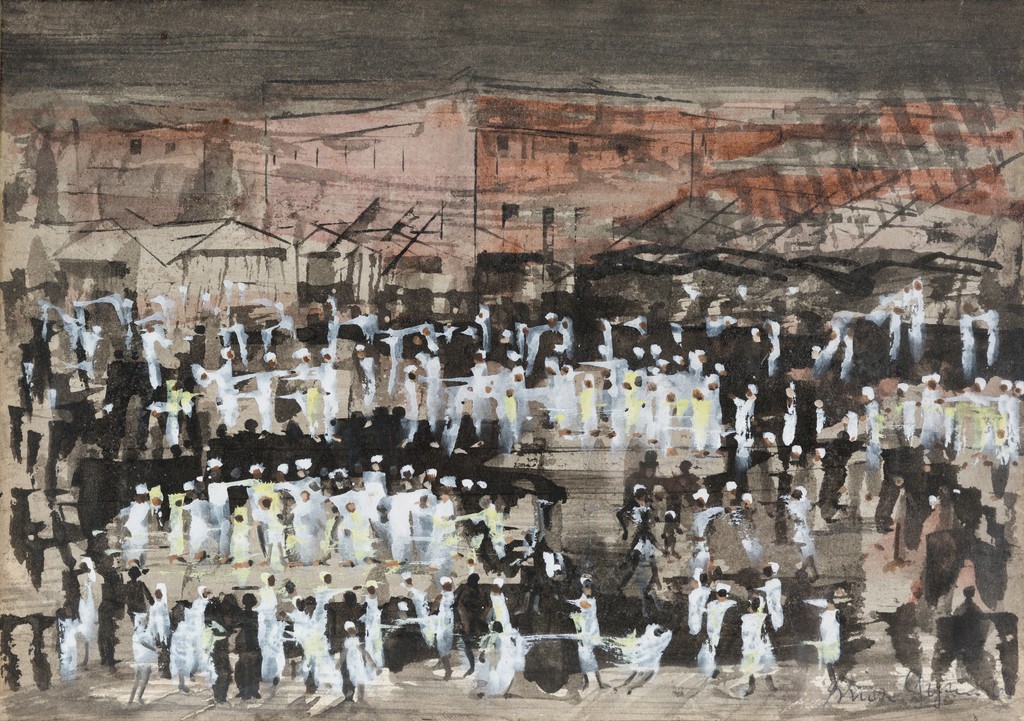 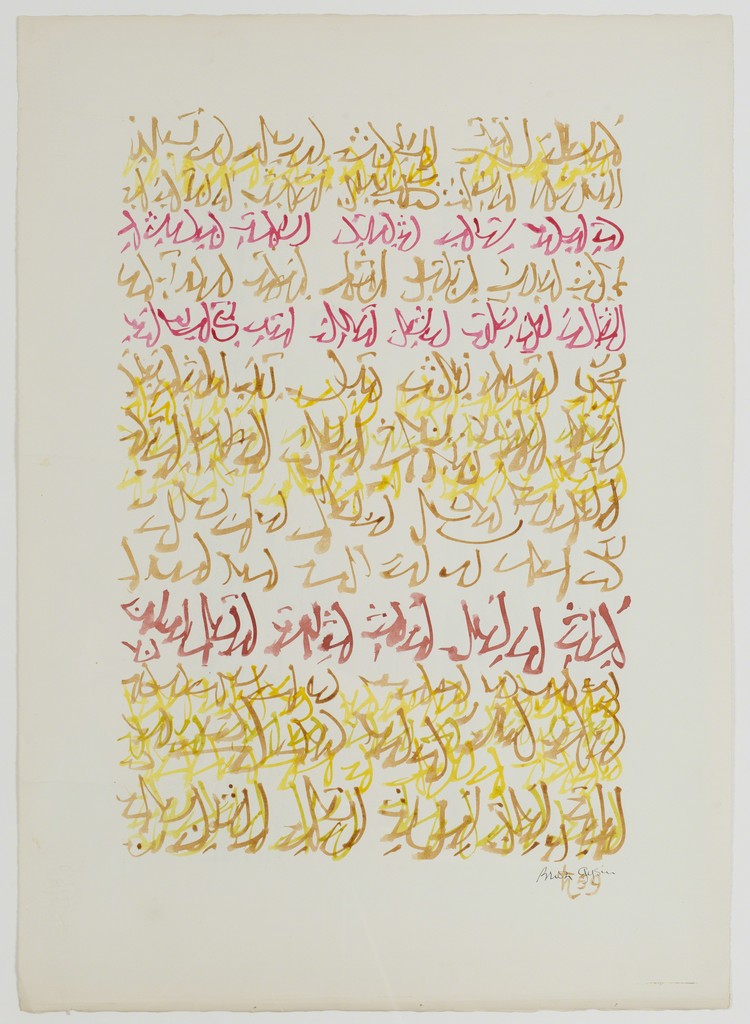 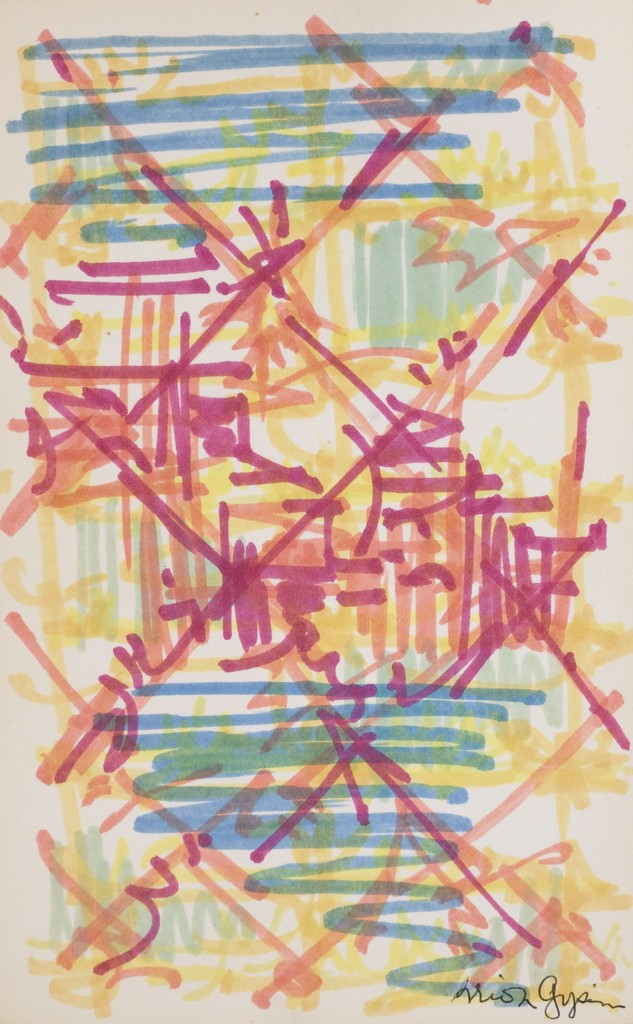 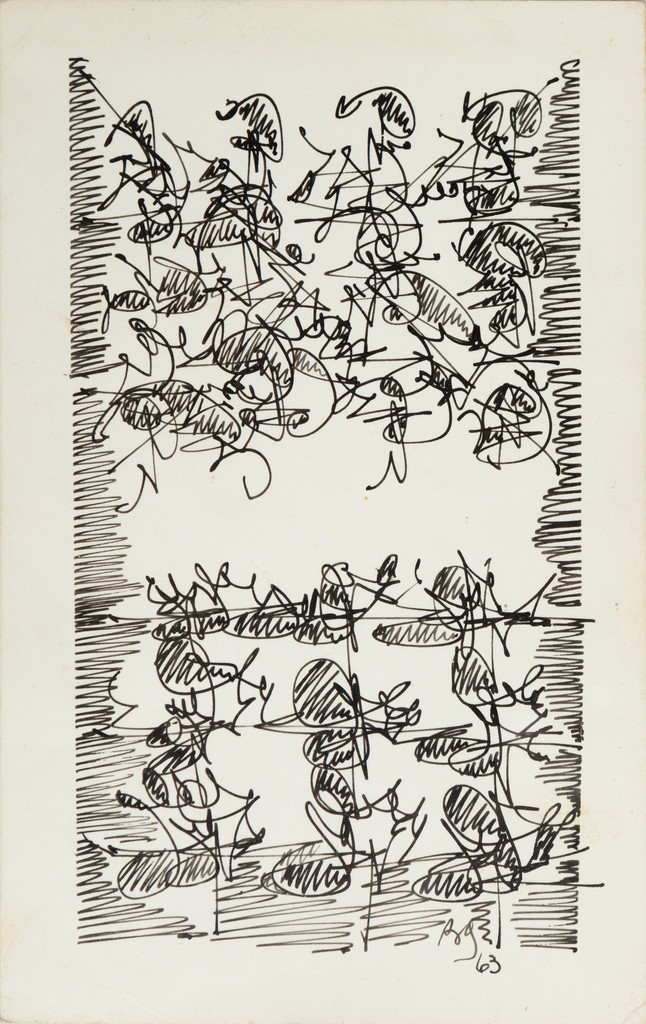 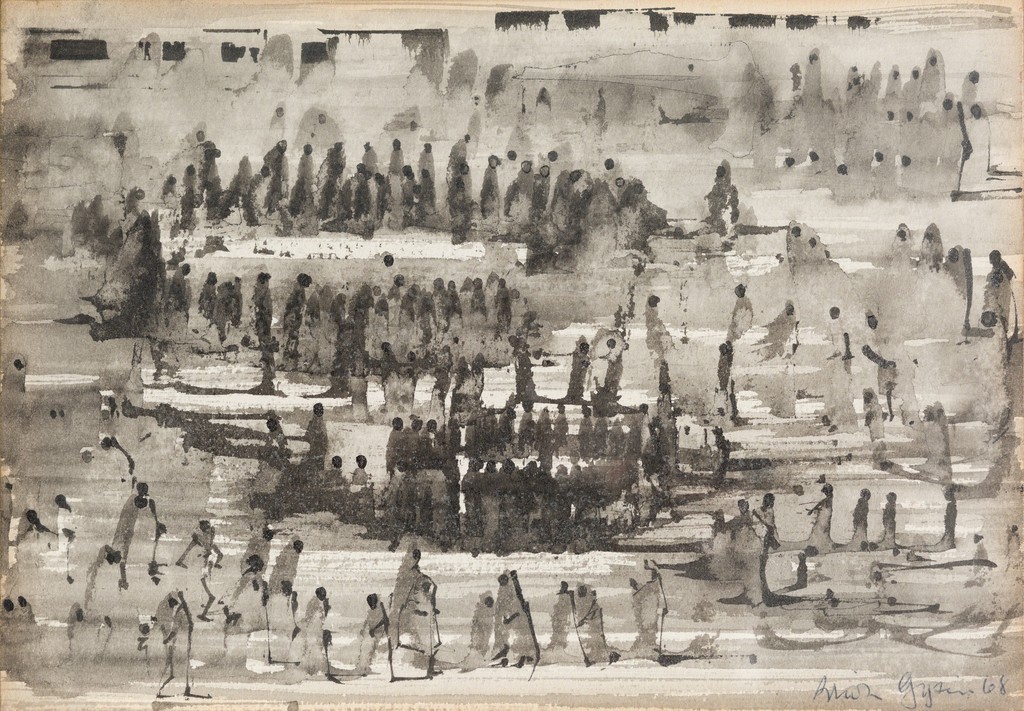 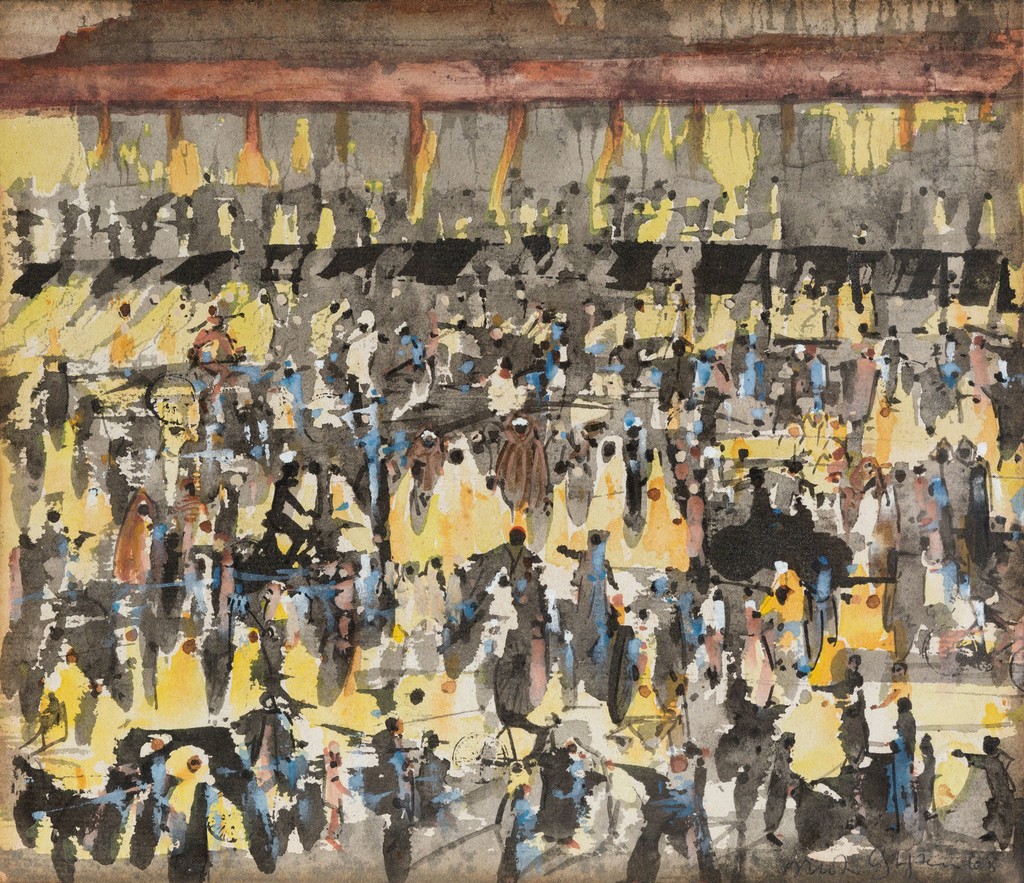 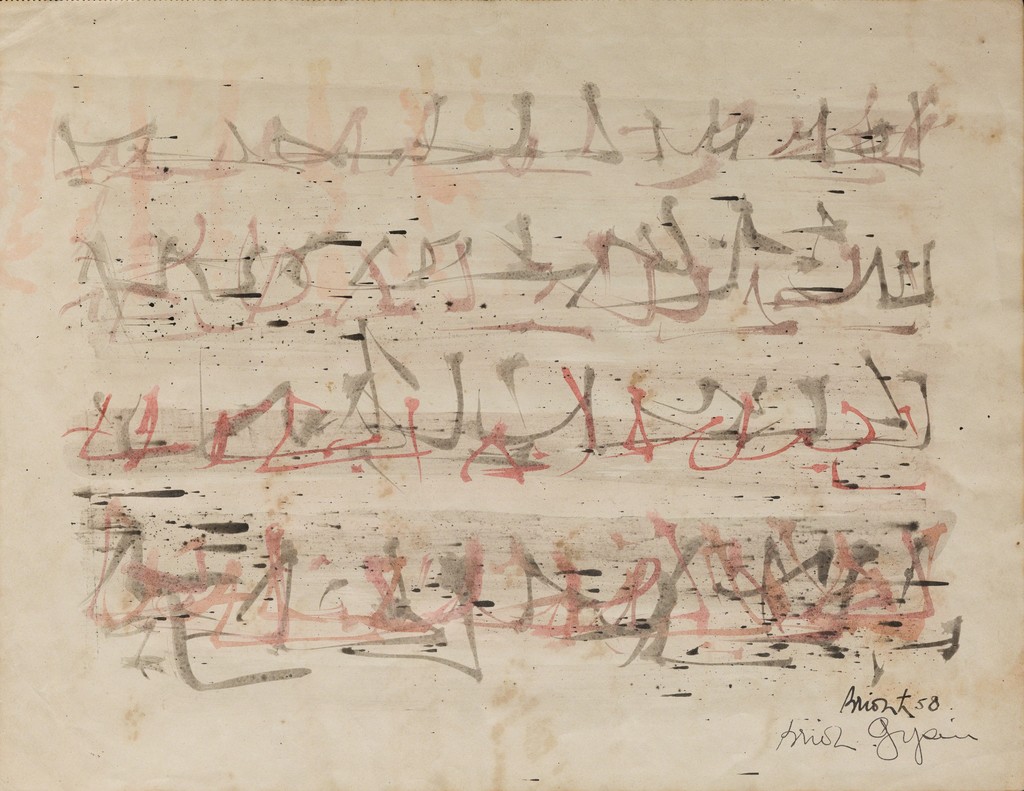 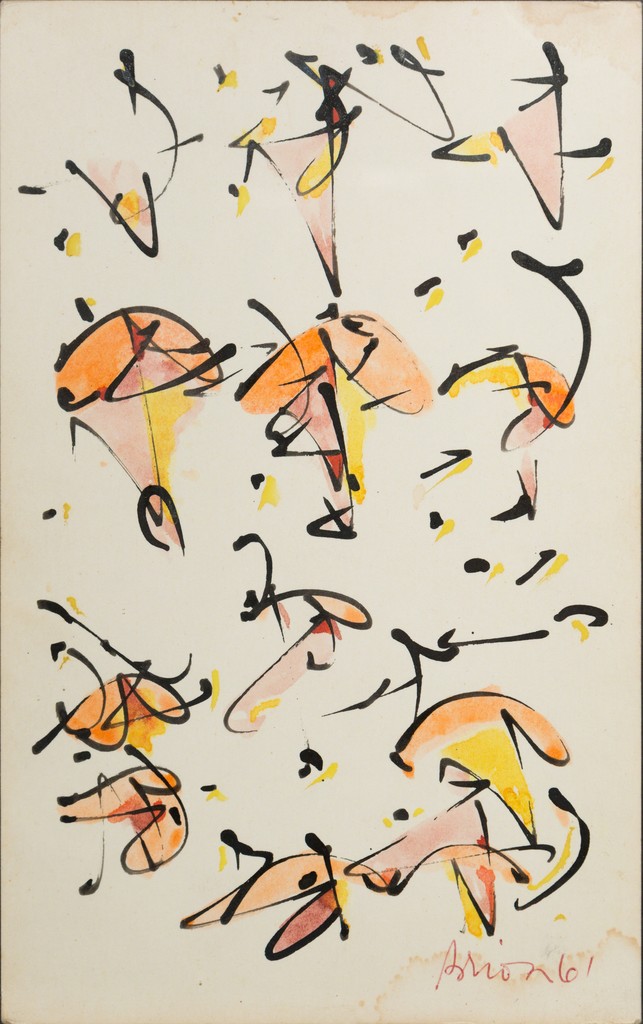 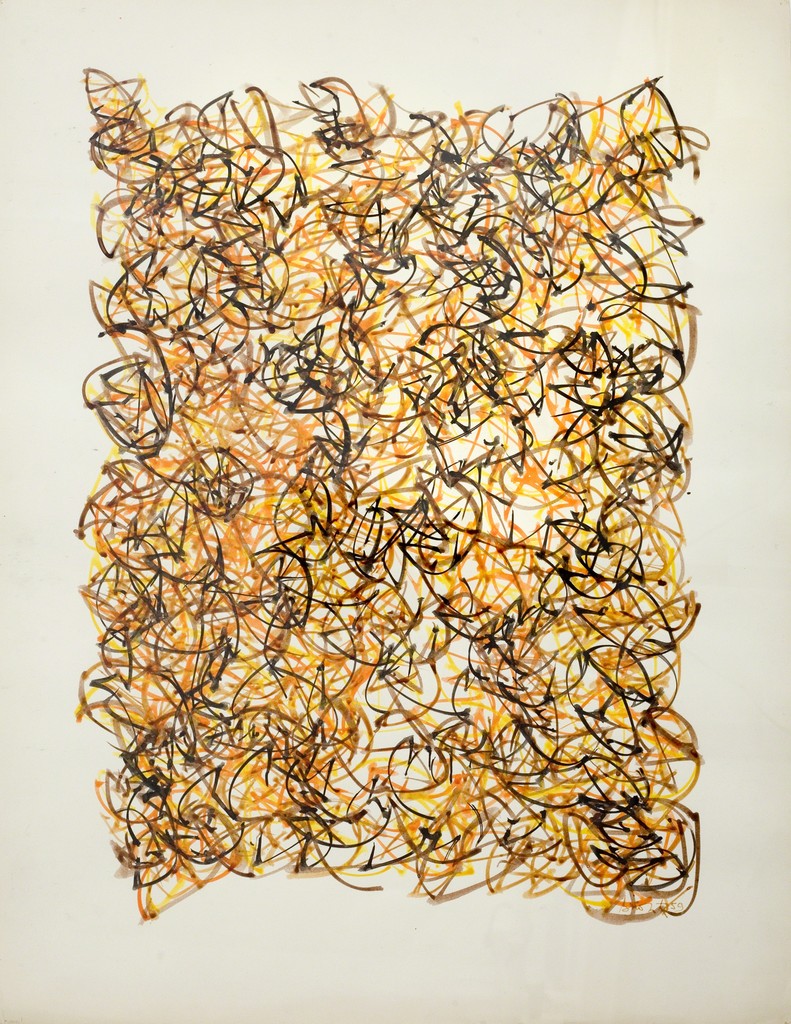 Brion Gysin, (1916 – 1986) was born in Taplow, England and in 1934 went to study at the Sorbonne, Paris. Gysin’s first exhibition was in Paris in 1935, a group show of Surrealist drawings with Picasso, Dali, Ernst, Magritte, Man Ray and others. His name is in the catalogue but his work was taken down during the opening by Paul Eluard at the order of André Breton, presumably for ‘deviationism’ and lese majestie towards Breton. In 1939, he had a one man show at the same gallery and left that year for New York, where he worked on Broadway, in shipyards, and met Paul Bowles, who invited him to Tangier. His journey to the Algerian Sahara influenced his work greatly. Gysin was a multifaceted artist whose fertile mind and wide range of original ideas were a source of inspiration for artists of the Beat Generation in Paris.

Unseen Collaborator refers to the concept Gysin developed with Burroughs, Third Mind. In an intense collaboration, a third entity appears, the ‘mind’ of the collaboration itself- almost like progeny. Gysin worked with collaborators to deconstruct assumptions of perception. Alfred Korzybski, the inventor of general semantics, called humanity the ‘time-binding’ animal. Gysin and Burroughs worked to make visible the unseen arrow of time that biology presents to us, which, post-Einstein, they considered to be illusion; Human perception- temporal truths, fixations and obsessions, play, jokes, ambiguous pronouncements, inspirational sparks, alternate histories- all were the fuel for Gysin’s inventions.

Gysin is remembered particularly for his evocative paintings of the North African desert in the 1950s and his original calligraphic abstractions based on his knowledge of Japanese and Arabic scripts. A radical cultural visionary, visual artist, writer and performer, Gysin introduced his close friend, writer William S. Burroughs, to the techniques of "cut-ups" and "permutation". Together, they experimented in sound and image, using collage, tape recorder, light-painting, writing and film. They co-authored Third Mind, the term they used for such creative collaboration. Their work has had a pervasive influence in the arts and on underground and popular culture, affecting figures such as David Bowie, Patti Smith, Bill Laswell, Keith Haring, Michael Stipe, and Genesis P. Orridge.

October Gallery was the first in the UK to show Gysin's work with a solo exhibition in 1981, and his magnum opus, Calligraffiti of Fire, in 2008. Brion Gysin’s first US retrospective exhibition was held at the New Museum of Contemporary Art, New York, in June 2010.