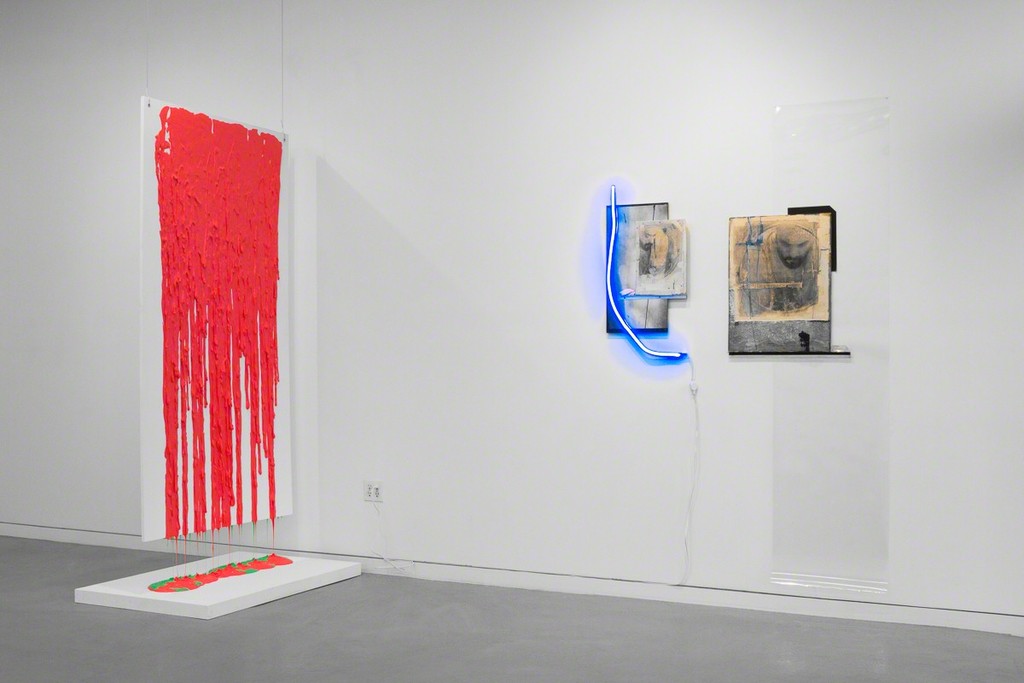 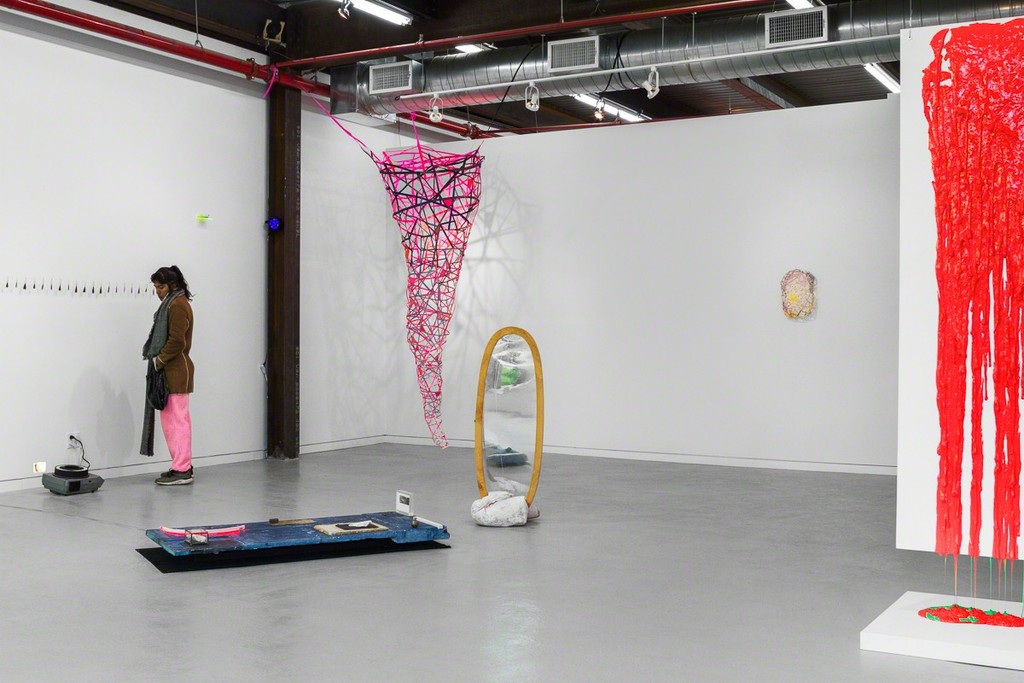 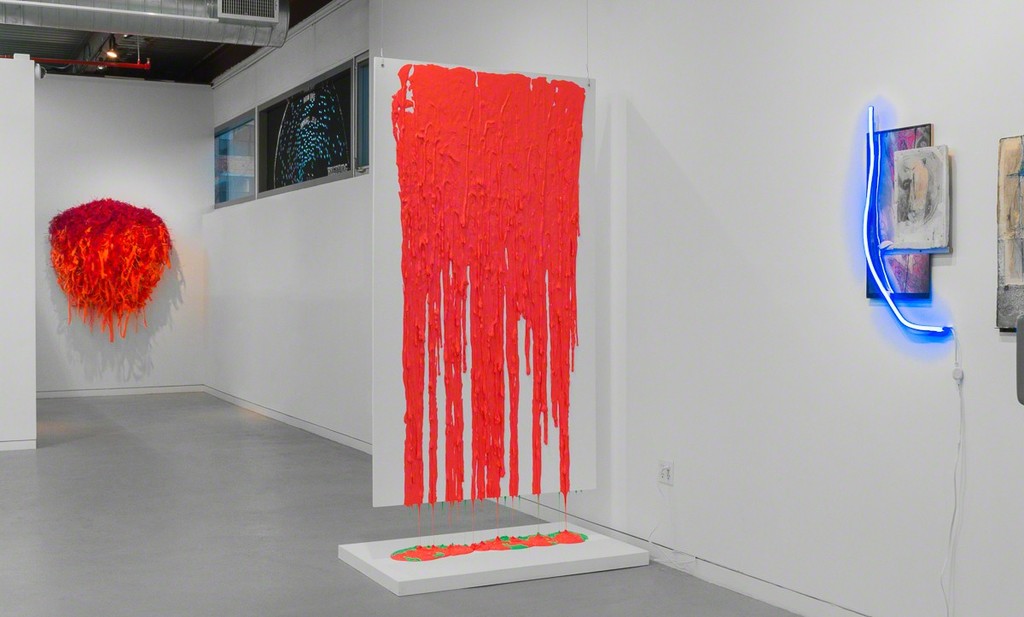 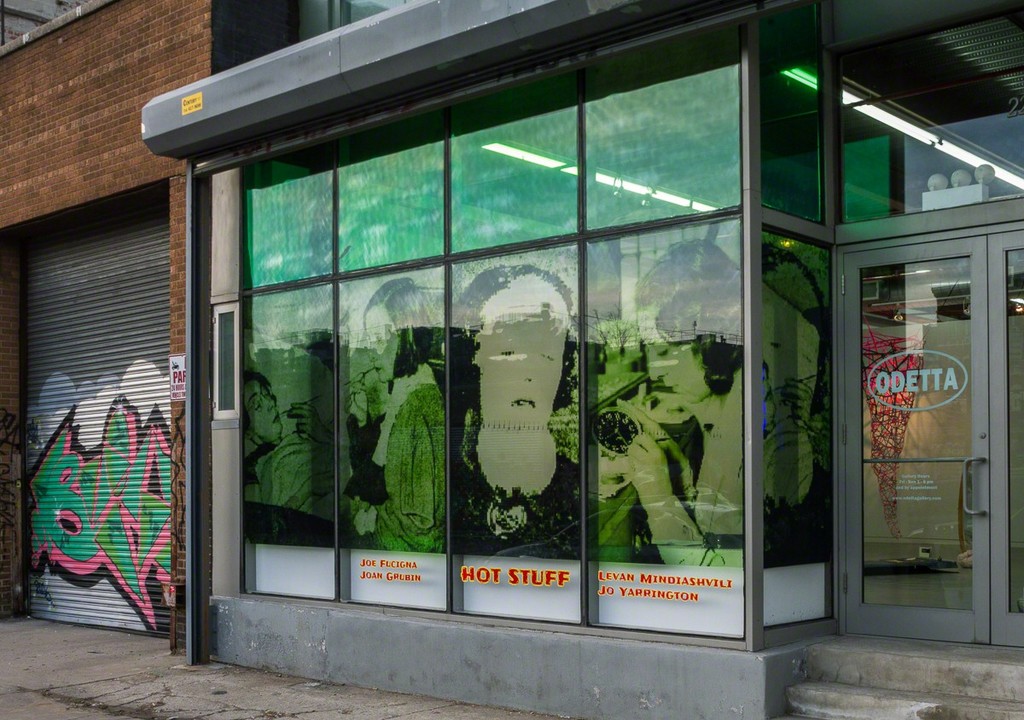 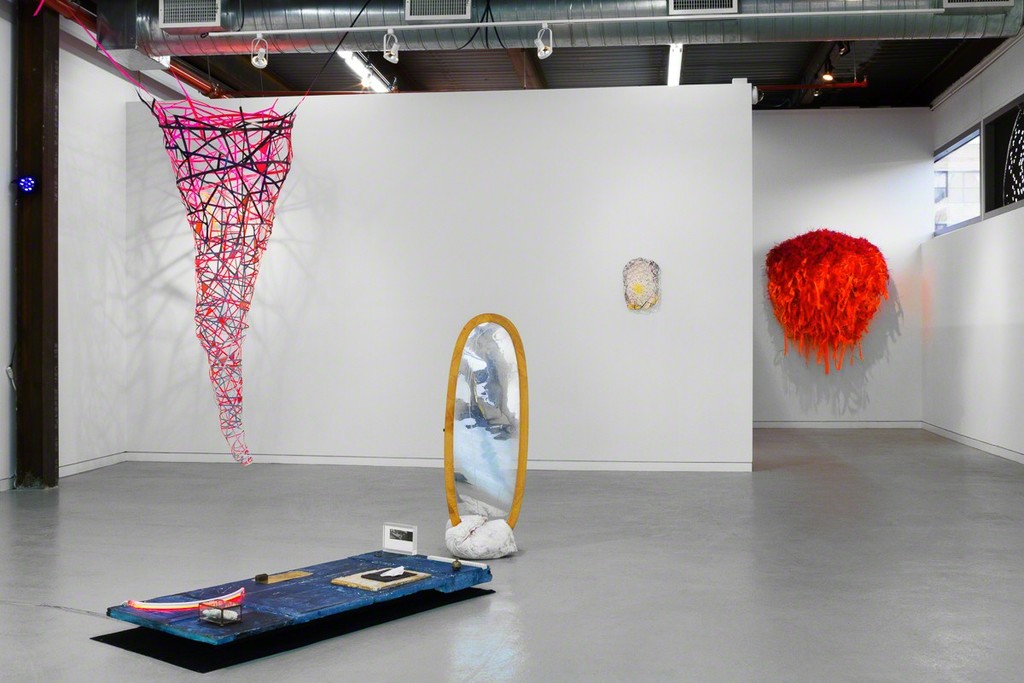 ODETTA’s starting the New Year with some

Hot Stuff brings together four artists who offer color-focused sculptural installations that address both social and formal concerns. Joe Fucigna, Joan Grubin, Levan Mindiashvili, and Jo Yarrington will transform the gallery into a space where one moves through warm fields of flourescent colors, referencing historical and current issues.

Joseph Fucigna is a multi-media artist whose work is rooted in process, play and the innate qualities of the materials used. Through experimentation, play and innovation he creates sculptures, paintings and drawings that are known for their power to transform materials, inventiveness and odd but suggestive subject matter. The ultimate goal is to create an artwork that is a perfect balance between suggestive content, and the formal qualities of the material that allow both to be active participants.

Joseph Fucigna received his Masters of Fine Arts degree from the School of Visual Arts in New York City. He also attended the Triangle Workshop in Pine Plains, NY and worked with the renowned sculptor Sir Anthony Caro and critic Clement Greenberg.

Fucigna is a full-time Professor of Art at Norwalk Community College and is the Chair of the Studio Arts Program. Fucigna has also taught in the Art Department at the State University of New York, Stony Brook. Presently, he resides and works in Weston, CT.

Fucigna was also a recipient of an Individual Artist Grant from the Connecticut Commission on the Arts.

Joan Grubin
Weaving is a form of drawing, of plotting and connecting lines. Fabricating a three-dimensional, transparent object using thin strips of paper with differing colors on either side results in a kind of two-sided drawing in space. The repetitive, meditative act of weaving has given Grubin the uncanny sense of connecting with ancestors across the centuries through gestures that unconsciously invoke early modes of survival – weaving nets, clothing, traps, and forms of shelter.

With the bright airy space of ODETTA in mind, Grubin is able to push a new strategy of weaving strands of paper into shapes which, through intuitive engineering, possess a tensile strength that exceeds the strength of the paper itself.

Joan Grubin is a New York-based visual artist and writer. Grubin has shown her work in solo and group exhibitions including the New York Public Library, the Parrish Art Museum, the Weatherspoon Museum, the University of Maine, and the Kentler International Drawing Space and Garvey Simon Gallery, NYC.

She was awarded a New York Foundation for the Arts Fellowship In2008, and was a MacDowell Colony Fellow in 2012.

Levan Mindiashvili, in his second major exhibition at ODETTA, will debut works from a new project entitled “The Color Of The Sky” in which he examines the issues concerning identity politics. focused on gender bias and the ramifications of marketing this topic. His work occupies the territory between painting and object-making. Pigmented hydrocal tiles either contain charcoal drawings or suggest abstracted found architectural remnants. Oftentimes these new images depict self-portraits, and question the gap between the tradition of self-portraiture (critical self analysis) and today's widespread “selfie” culture (narcissistic self-exposure excluding any critical self-observation).

Levan Mindiashvili is a Georgian born (1979) visual artist and independent curator living and working in New York and Tbilisi. He holds his BFA in Sculpture from Tbilisi State Academy of Arts and MFA in Crossed Media at The National University of Arts of Buenos Aires, Argentina.are Commission Grant for Public Art Projects from National Endowments for Arts (New York, 2014) and Emerging Artist of 2011, Movistar Arte Jóven (Buenos Aires, Argentina). In 2017 he served as a guest professor at The Free University: School of Visual Arts and Design, in Tbilisi (Georgia).awards
His works had been included in recent group exhibitions at The 7th Beijing Biennale, China; Georgian National Gallery, Tbilisi; David & Schweitzer Contemporary, Brooklyn, US; Tbilisi History Museum, Georgia; Arsenal, Kiev, Ukraine; Tartu Art Museum, Estonia.

Radioluminescence is the phenomenon by which light is produced in a material by bombardment with ionizing radiation and can be used as a low-level light source for night illumination of instruments or signage or other applications where light must be produced for long periods without external energy sources. Radioluminescent paint used to be used for clock hands and instrument dials, enabling them to be read in the dark.

What is now referred to as the Radium Girls, or Ghost Girls were female factory workers who contracted radiation poisoning from painting watch dials with self-luminous paint. The painting was done by women at three different factory sites in the United States, and the term now applies to the women who worked at these facilities. The first, United States Radium factory in Orange, New Jersey, beginning around 1917, the second, at Ottawa, Illinois, beginning in the early 1920s, and the third facility at Timex in Waterbury, Connecticut. The politics surrounding this issue which resulted in a groundbreaking battle for workers’ rights and specifically for women’s rights in the workplace has been both heartbreaking and inspiring. Their story especially resonates with Yarrington's expanding interest in Uranium as an element, and its many properties and functions, from its emanation of light wave particles to its inherent power to both sustain life and to take it away.

2016 exhibitions include Heliotrope at ODETTA, Brooklyn, NY, Edition Tools at the Project Space Gallery, SUNY at Oneonta and a solo Containment and Spillage Series, a collaborative exhibition at the Humanities Gallery, Long Island University Brooklyn.

Jo Yarrington is a Professor of Studio Art in the Department of Visual and Performing Arts at Fairfield University in Fairfield, CT. She lives and works in New York City.

ODETTA’s Flat Files are curated to tie in with every exhibition. David Ambrose, Joan Grubin, and Audrey Stone have created new works that bring viewers into a more intimate encounter with their work. Opening each drawer in the cabinet presents interactive site-specific installations on a micro-scale that offer an element of surprise with the breadth of dimensionality and innovation.

David Ambrose’s fascination with paper began as a child as when convalescing from major surgery on his right leg at the age of seven. Paper became the playground for his imagination and to this day, it has remained a safe haven; the primary surface for his creative endeavors.

His family immigrated from Sicily and Italy in the early 20th century. Their path to America was guided like a thread through the eye of a needle. Both sets of grandparents included tailors and dressmakers that established their lives in America and made their living through these skills. This idea of applying pattern to build a structure, sewing, and the needle all play major roles in this recent series of works on pierced paper.

To create each work, the paper skin is first damaged by the act of piercing or puncturing it hundreds or thousands of times by hand with a pin tool - a long, metal needle commonly used by ceramicists. The paper is then repaired by the act of drawing or painting on its surface much in the same way the artist’s body was damaged as a child and repaired by the surgery and stitches applied to heal it.

The equally divergent processes of control (repetitive pattern) and chance (intuitive application of color) play a major role in the work, with the whole having the feeling of a topographical map with each layer of the process captured in the its final stratification.

Observing shifting color is an ecstatic experience for the artist. She is intrigued by transitions from one color to the next and the way the eye and brain process these transitions, informing the viewer’s emotional and physical response to the work. Color gradients have become a prominent element in her work. Through the perception of light and color in nature she often finds herself feeling both excitement and calm simultaneously, producing a desire to bring this dynamic opposition into her work.

For Stone, the most exciting part of the work are the small surprises of unintentional happenstance; edges that bleed a little more than intended, the texture of paint when applied, or a slip of canvas exposed unexpectedly reveal the natural inaccuracies of the human hand. The evidence of human action and ‘mistake’ exists alongside the desire for precision and accuracy.

Her work has been exhibited widely across the US as well as in Prague, London, Bulgaria, Paris and more recently Tokyo. Recent exhibits include a two-person show at Muriel Guepin Gallery, a solo exhibit of a thread based installation on Governor’s Island, and group shows at ODETTA in Brooklyn, The Arkansas Art Center, Geoffrey Young Gallery, Kentler International Drawing Space, and Jeff Bailey Gallery. Her work is included in many private collections across the United States, in Hong Kong, as well as The Amateras Foundation in Sophia, Bulgaria and the Fidelity Investments Collection.

Stone was born and raised in New York City and has many memories of haunting museums, galleries and the studios of established artists while growing up. She studied painting at Pratt Institute and The Nova Scotia College of Art and Design and received her BFA from Pratt Institute in 1986. In 1993 She received an MFA from Hunter College. Audrey Stone lives and works in Brooklyn, New York.

Hot Stuff is the gallery’s 30th exhibition. There will be an opening reception for the artists on Friday, December 19, 2018, from 6 – 8:00 pm and the public is invited. Gallery hours are Friday thru Sunday 1-6 pm, and by appointment. Please check the gallery website for related events throughout the course of the exhibition.