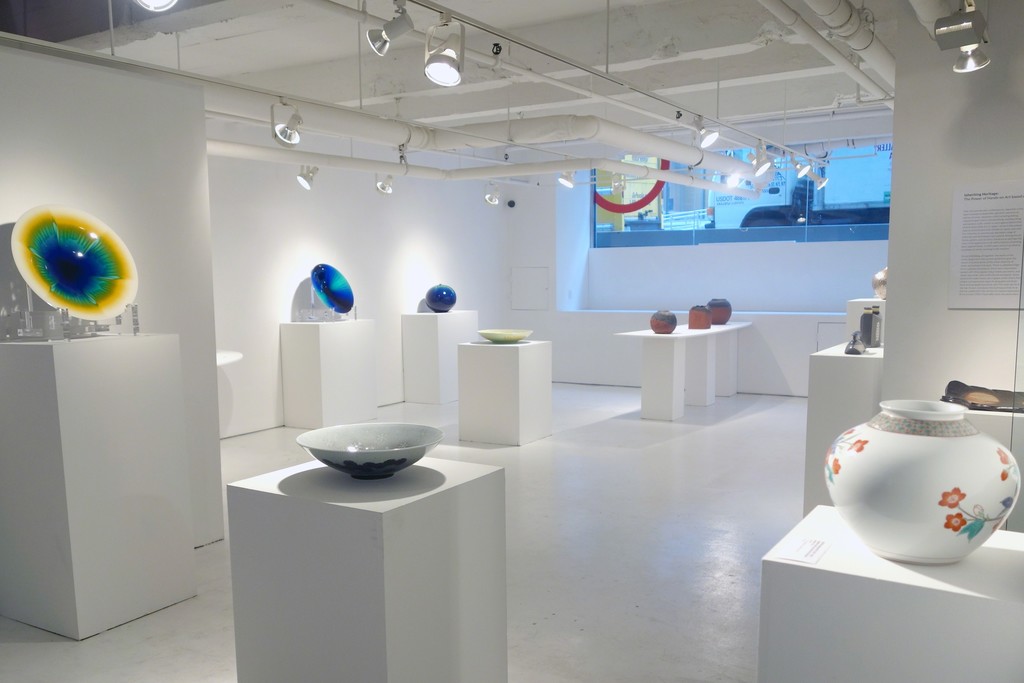 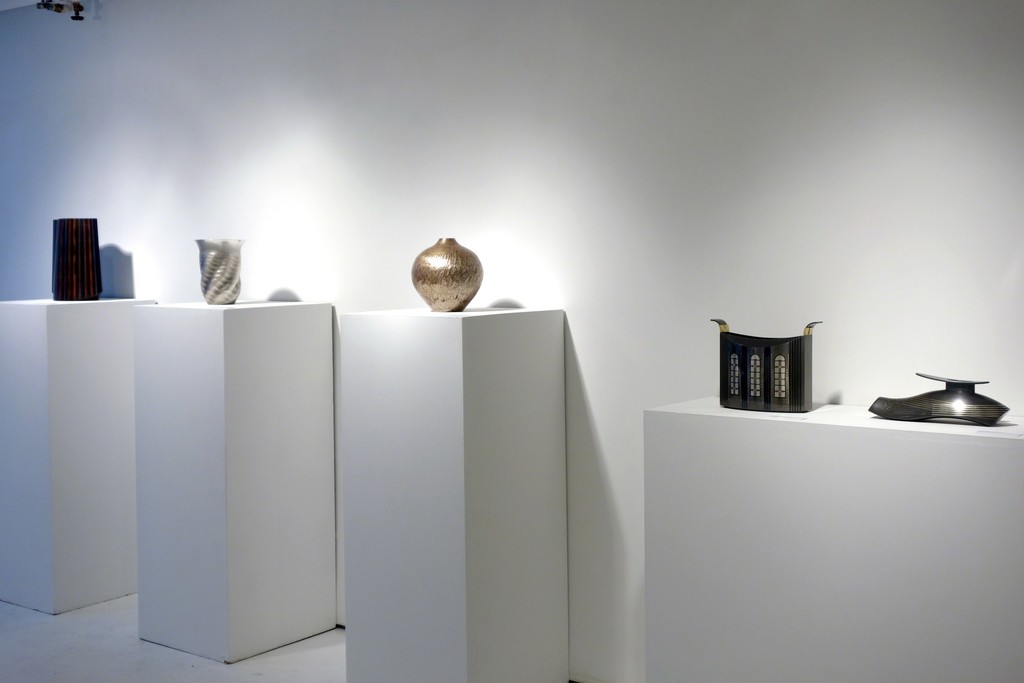 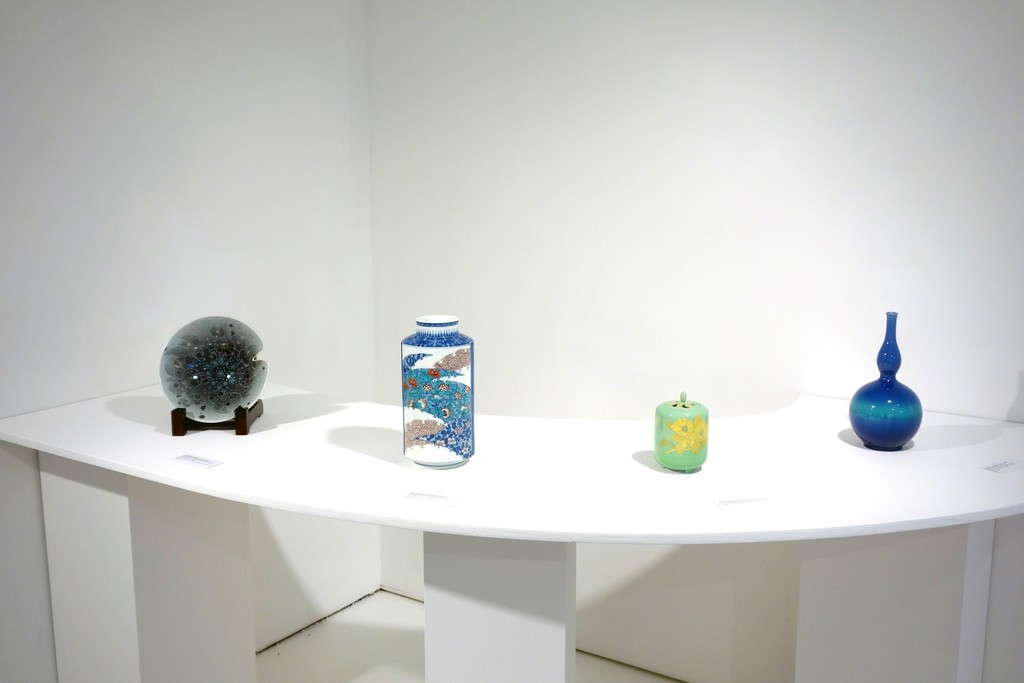 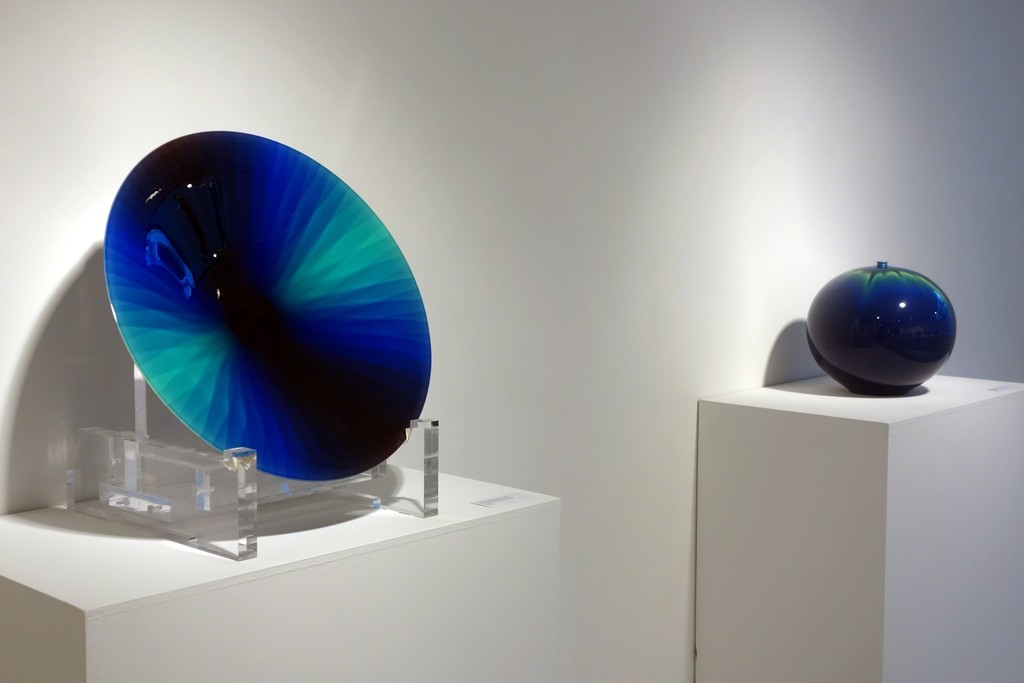 Onishi Gallery is pleased to bring together the work of ten master-level artists who have been designated Living National Treasures by the Japanese government. Unparalleled in their craft, these artists have not only gained mastery over their chosen media, but their contributions are so significant that they constitute intangible cultural properties. These artists, many carrying on techniques that have been passed down through their families for generations, have not only preserved important cultural traditions, but have created new ways to interpret them.

In 2014, Imaizumi Imaemon XIV (b. 1962) became a Living National Treasure at the age of 51, making him the youngest artist in Japan to receive the honor. An expert in the Iro-Nabeshima style of polychrome ceramics, Imaizumi utilizes traditional techniques but also injects his own personal tastes, resulting in technically impressive pieces with truly unique designs. The 14th generation head of his family, Imaizumi’s work is in many museums’ permanent collections, including The National Museum of Modern Art in Tokyo, The Kyushu Ceramic Museum in Saga, The Museum of Ceramic Art in Hyogo, The British Museum in London and The Auckland Museum in New Zealand.

Isezaki Jun (b. 1936), the second son of potter Isezaki Yōzan, is one of the most renowned masters of Bizen pottery, a traditional ware that emerged nearly a thousand years ago in the Inde district of Bizen, Okayama prefecture. He is the fifth artist of Bizen pottery to be designated a Living National Treasure by Japan’s Agency for Cultural Affairs. His works have been exhibited and collected by major museums in the world such as by the British Museum, and the Museum of Fine Arts, Boston.

Ito Sekisui V (b. 1941) earned recognition for his work with mumyoi, or red clay rich in ferric oxide. Extracted from gold mines and endemic to Sado Island in Niigata prefecture, the artist’s birthplace, this clay allows Ito to work in his own signature style. After graduating from Kyoto Technical University with a degree in ceramics in 1966, he returned to Sado Island to continue his family’s ceramic business, in operation for fourteen generations. Ito began experimenting with mumyoi and various firing methods, and is now known for his unglazed, wood-fired red-and-black ceramics. He continues to experiment with different techniques and strives to perfect his skills even further. His work can be seen at many museums around the world: The Niigata Prefectural Museum of Modern Art, Niigata; Ibaraki Ceramic Art Museum, Ibaraki; The National Museum of Modern Art, Tokyo; The Victoria and Albert Museum, London; The Smithsonian Institute, Washington D.C.; The Metropolitan Museum of Art, New York.

Nakagawa Mamoru (b. 1947) has been a seminal figure in a successful initiative to revive metal-inlay as an important genre of craftwork. He has enlivened the traditionally monotone realm of metal casting, for example, with an unprecedented palette of colors. As the 'zogan' technique is said to have originated around Turkey, the artist has visited the area more than ten times, following the route of the Silk Road, the cultural crossroads between the East and the West. Nakagawa identifies the roots of his metal-inlay techniques there in its amalgamation of East and West, as well as of tradition and innovation. In 2008, one of his masterpieces, 'Sekisei', was acquired by the Metropolitan Museum of Art in New York.

The first female metalware artist to be designated a Living National Treasure, Osumi Yukie (b. 1945), specializes in tankin, or hammered vessels. The recipient of numerous awards and accolades, she is known for her application of the traditional technique nunome-zogan or textile imprint inlay. This involves hammering metal leaf or wire into a fine, mesh-like grid incised into the surface of metal. Osumi creates both decorative and functional objects, such as vases and tea utensils. She likes to convey a sense of nature, which is formless and flowing, and does so through her designs of wind, waves, clouds and streams. Her works are in the public collections such as The National Museum of Modern Art, Tokyo, Victoria & Albert Museum, London and The Royal Museum, Edinburgh.

Toyama Prefecture’s sole Living National Treasure, Ozawa Komin (b. 1941) was born in an area known for its copperware. Ozawa is recognized today as master of the yakigata casting technique. He is also the inventor of a cast-wrapping technique called igurumi in which metal decoration is attached to the surface of the mold before molten metal is poured inside. Ozawa blends innovative technology with creative design to push the boundaries of traditional metal casting.

Designated a Living National Treasure for his unique metal hammering techinique, Tamagawa Norio (b. 1942) is one of the most respected and well known artists of his field in Japan. He was born in 1942 in Niigata Perfecture and is a descendent of Kakubei Tamagawa who founded Gyokusendo in 1816. Gyokusendo creates functional and decorative copperware in the “Tsuiki” or hand hammered method. Tamagawa studied the hammering technique in Tokyo as an apprentice under Sekiya Shiro, also a Living National Treasure from 1963 until 1965. After his apprenticeship, Tamagawa returned home and re-joined Gyokusendo. He continued to master his craft and was chosen to show at many prestigious exhibitions in Japan and in Europe, and received may prizes and awards. In 1996, he decided to devote all his time to art and resigned from the company. In 2010, he was designated a Living National Treasure.

Tokuda Yasokichi III (1933-2009) was one of the world’s most famous of Kutani potters. Born in Ishikawa prefecture, he was designated a Living National Treasure in 1997 for his mastery of the saiyu glaze technique. Based on traditional Kutani colored glaze enamels, Yasokichi III developed techniques handed down from his grandfather, Tokuda Yasokichi I (1873–1956) and later his father, Tokuda Yasokichi II (1907–1997). Through his saiyu glaze techniques, Yasokichi III created his own designs characterized by delicate shading and the beautiful color contrasts of his vivid enamel glazes. Yasokichi III’s works have been recognized widely and shown in numerous museums including the British Museum, the Metropolitan Museum of Art, the Sackler Gallery, and the Smithsonian Institute.

The Yoshita family is in charge of the Nishikiyama kiln, which specializes in aka-e kinrande, a highly decorative porcelain tradition using gold and red enamel painting in brocade-patterns of Kutani wares in Ishikawa. In 1951, Yoshita Minori (b. 1932), who had been making pottery since high school, took over the family business and became the third generation head of the family. Since then, he has been experimenting with numerous traditional techniques characteristic to the Nishikiyama Kiln while refining them in innovative ways. Yoshita is regarded as the leading figure in this field. In 2001, he was awarded the Medal of Purple Ribbon and was designated a Living National Treasure.