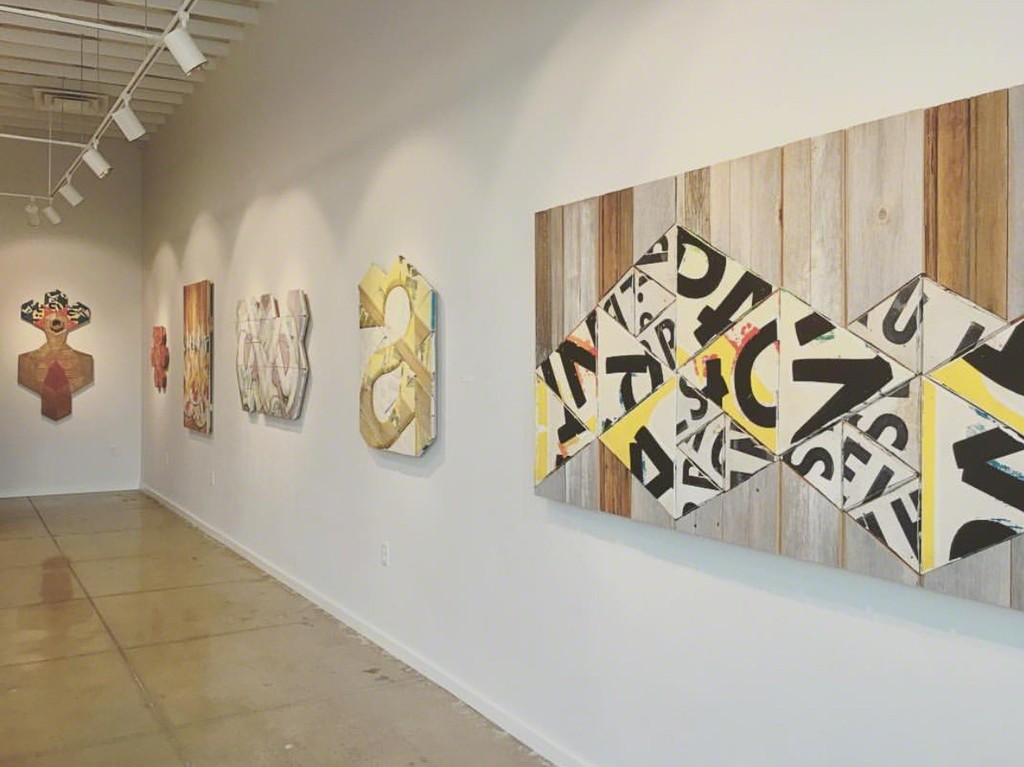 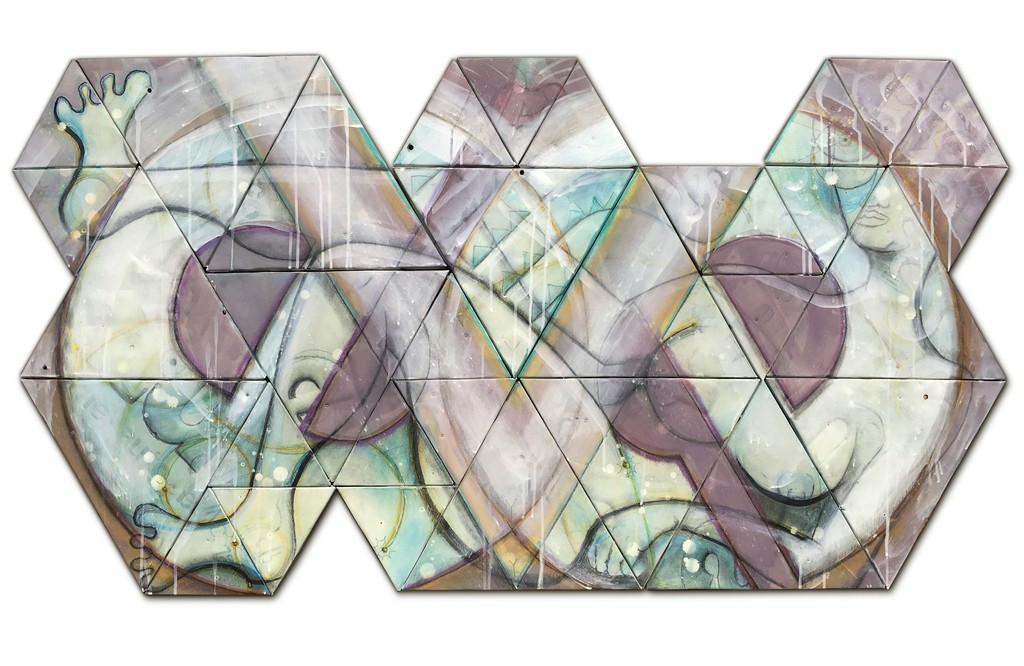 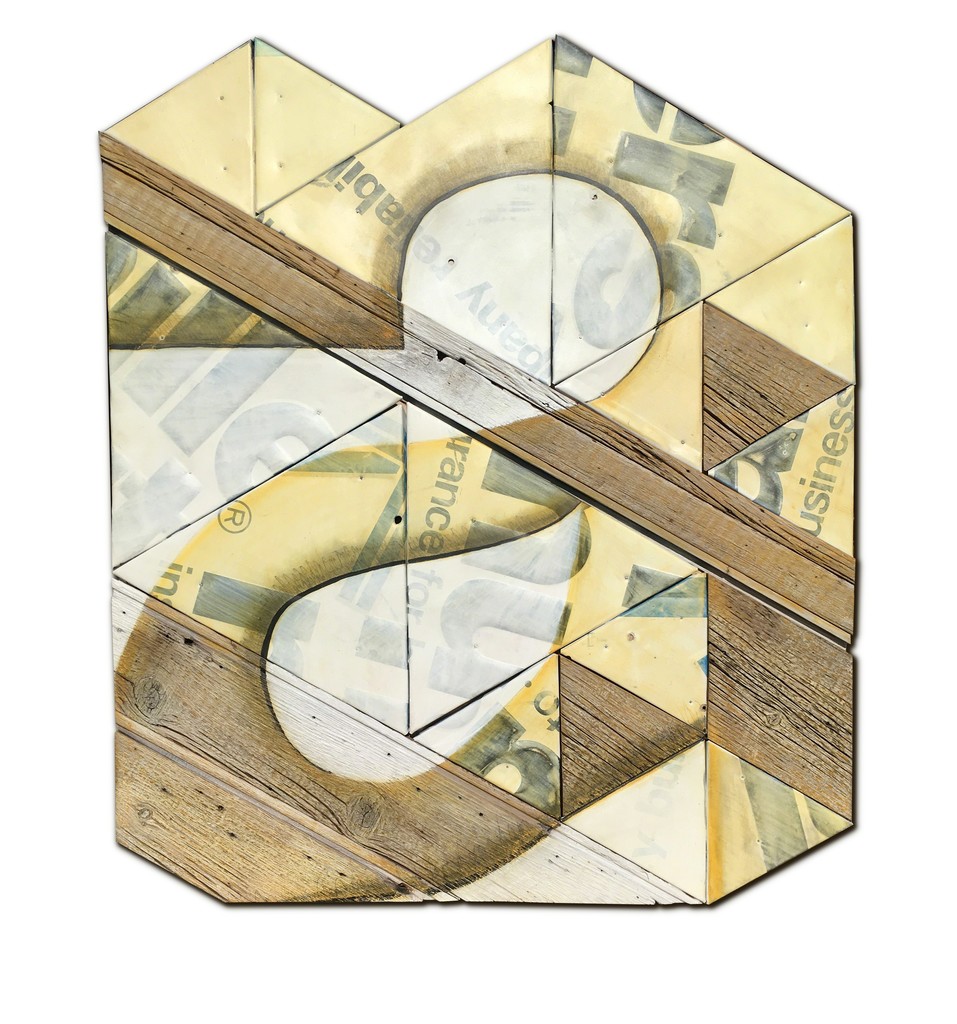 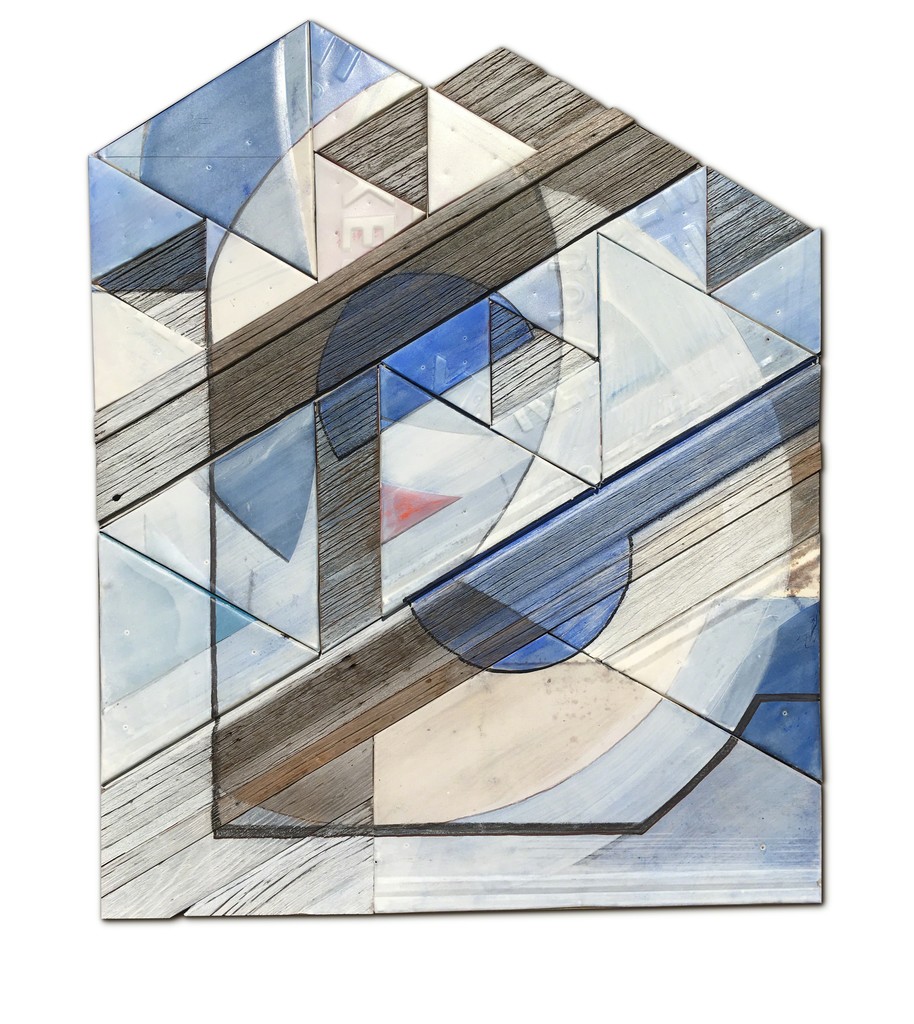 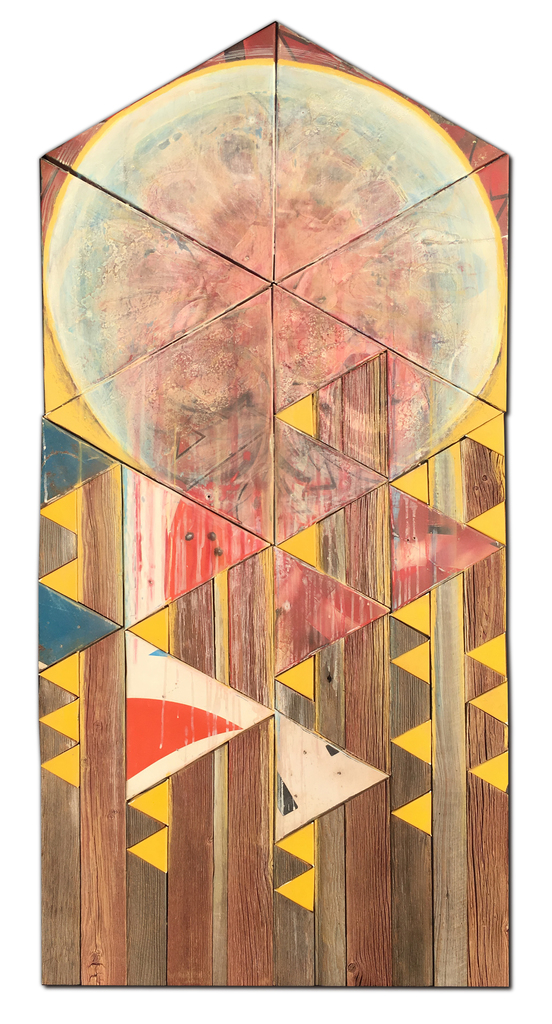 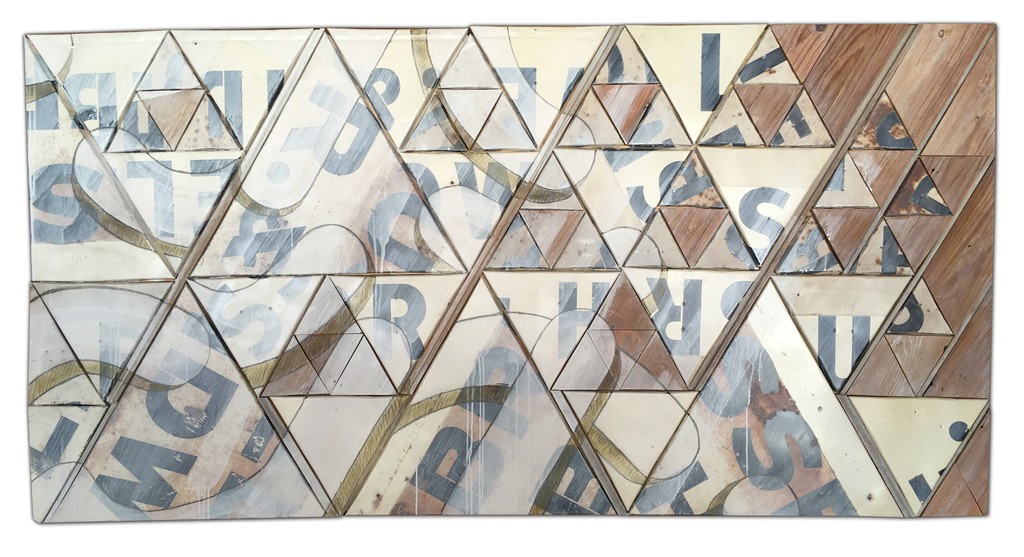 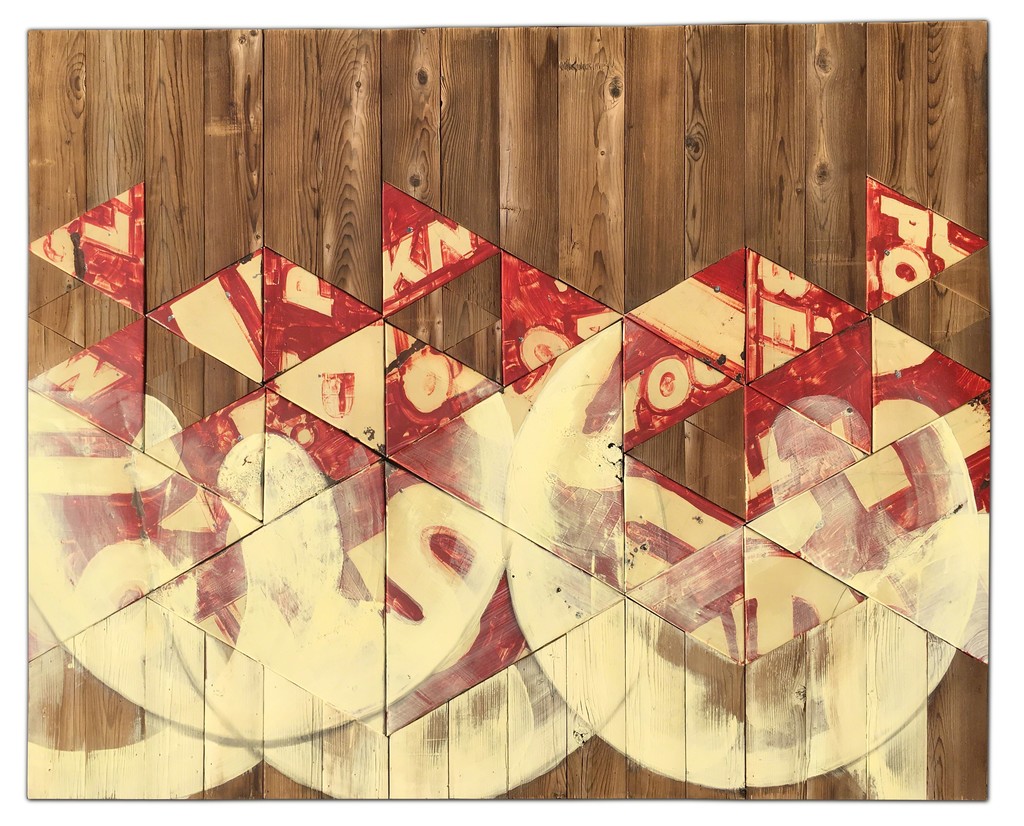 Open Mind Art Space is pleased to present Illinois-based artist, Benjamin Lowder’s second solo exhibition at the gallery, "Phoneme", featuring all new works, and co-curated by FUN Gallery founder Patti Astor. An artist talk moderated by art critic Shana Nys Dambrot will be held on Saturday, October 7th at 6:00 PM, followed by an opening reception for the artist from 7:00 PM - 9:00 PM. The exhibition will be on view from October 7th through November 3rd, 2017.

“Myth or Magic? Painting or Sculpture? Vintage Advertising or Subliminal Messages from the Past? All great art shares a secret but reveals its existence. Each of Benjamin Lowder's pieces not only invite us to share the adventure they hold within, they also inspire us to imagine our own.”
(Patti Astor, guest co-curator of "Phoneme")

“His recombinant visual aesthetic is painterly without gesture, literal without imagery, abstract without disorder, and animated by the symbols of man and nature.”
(Shana Nys Dambrot, art critic and author of "Benjamin Lowder: Words and Deeds" for Huffington Post, 2016)

In his upcoming exhibition "Phoneme" (pronounced fō-neem), Lowder returns with his latest in an ongoing series of mixed media works which he refers to as Myth, Math & Magic, using the same materials consisting of vintage metal signage and reclaimed wood, but this time incorporating more abstract painting on their surfaces and creating new three-dimensional totems in addition to his two-dimensional wall installations. In this series, Lowder says, "The advertising tropes of the vintage signs are deconstructed and reassembled into sacred geometric patterns that break the magic spell cast by the advertising’s original letter forms. These artifacts are recast to transmute feelings of nostalgia for an unsustainable past while drawing forward ancient wisdom to support an abundant future.”

Phonemes are the spoken sounds of alphabetic writing systems, and graphemes or letters are the written symbols that stand for those sounds. The invention of phonemes marks the beginning of humanity's use of symbols to stand for actual things. Lowder says, "The smartphone is the contemporary expression of this symbolic reality, but it began thousands of years ago with phoneme-based communication. We have moved generation by generation into an increasingly symbolic reality, separating ourselves from nature and the source of actual reality. This movement into a completely symbolic reality only stands to increase as the use of VR headsets becomes more widespread. It is also an interesting correlation that the word ‘phoneme’ appears to be a combination of the words ‘phone’ and ‘me’, which for this exhibition suggests our contemporary use of a virtual identity that we communicate through our smartphones. This digitally contrived identity could be referred to as our ‘phone-me’. This ‘phone-me’ identity is where our use of phonemes has led us to and it's my intention to peel back some of the layers of our current symbolic reality with this exhibition.”

Benjamin Lowder is a fine artist creating artwork comprised of geometrically arranged reclaimed wood and vintage metal signage. Lowder is a creative consultant for the Center for Spirituality and Sustainability housed in a Buckminster Fuller designed geodesic dome on the SIUE campus. Lowder also serves on the board of the Fuller Dome Home historic site which was Fuller’s personal dome home in Carbondale Illinois.
http://www.benjaminlowder.com/