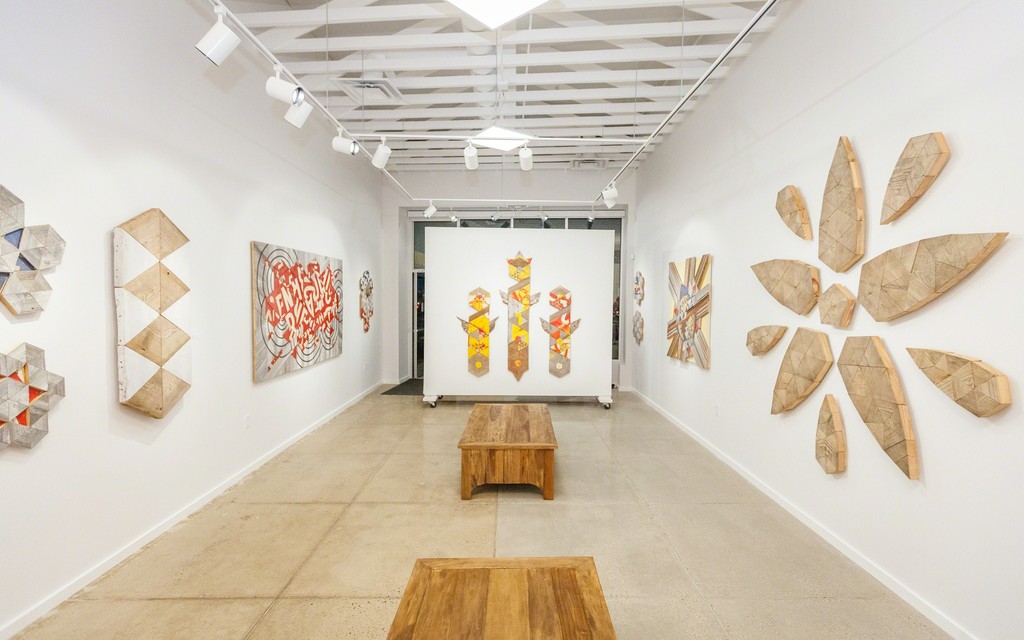 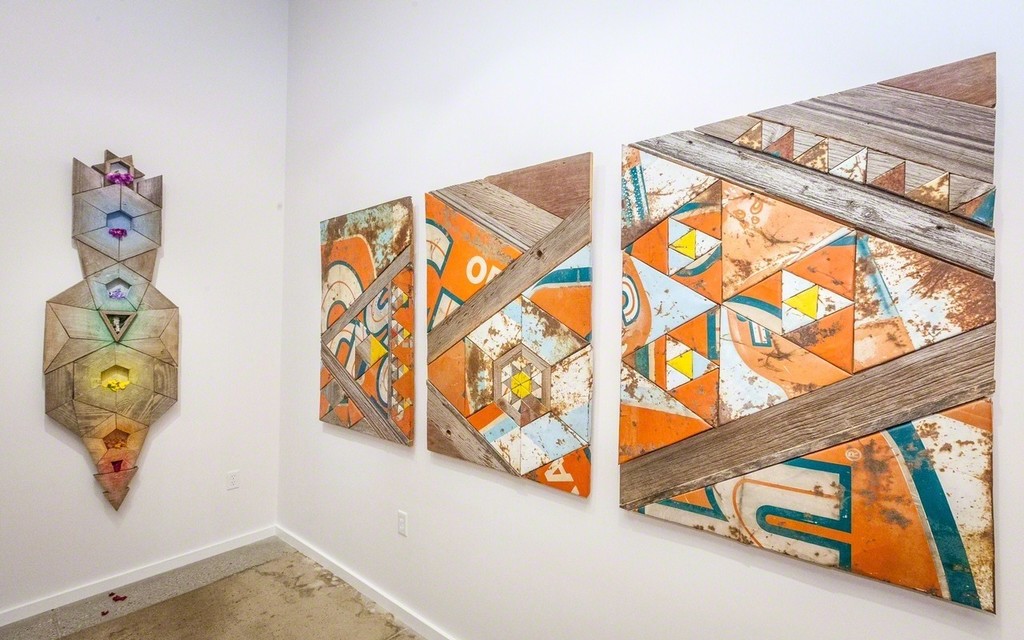 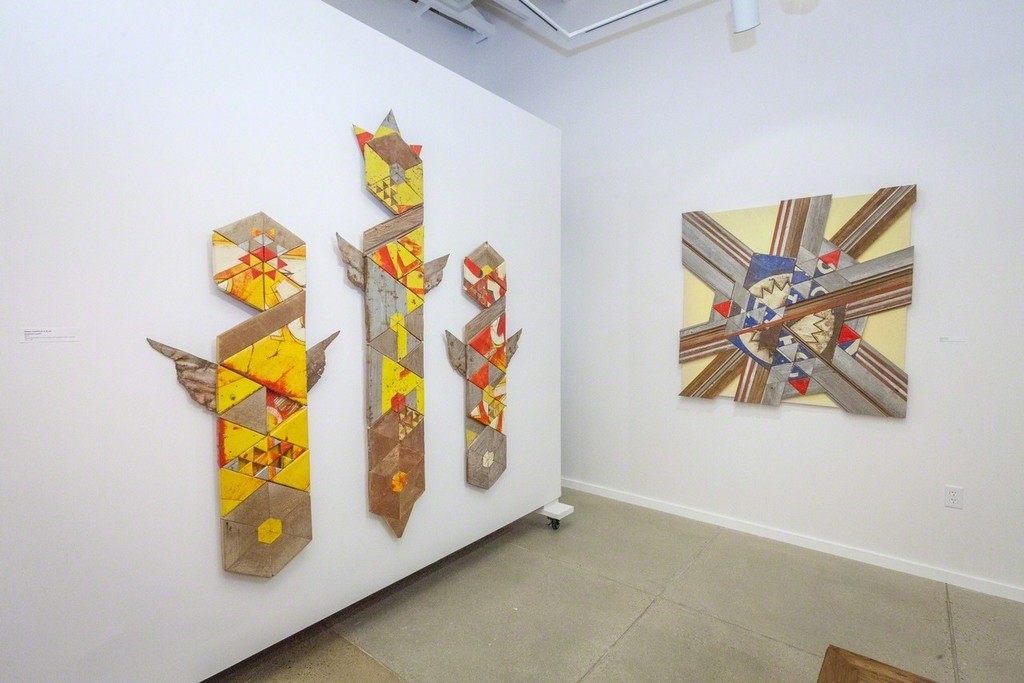 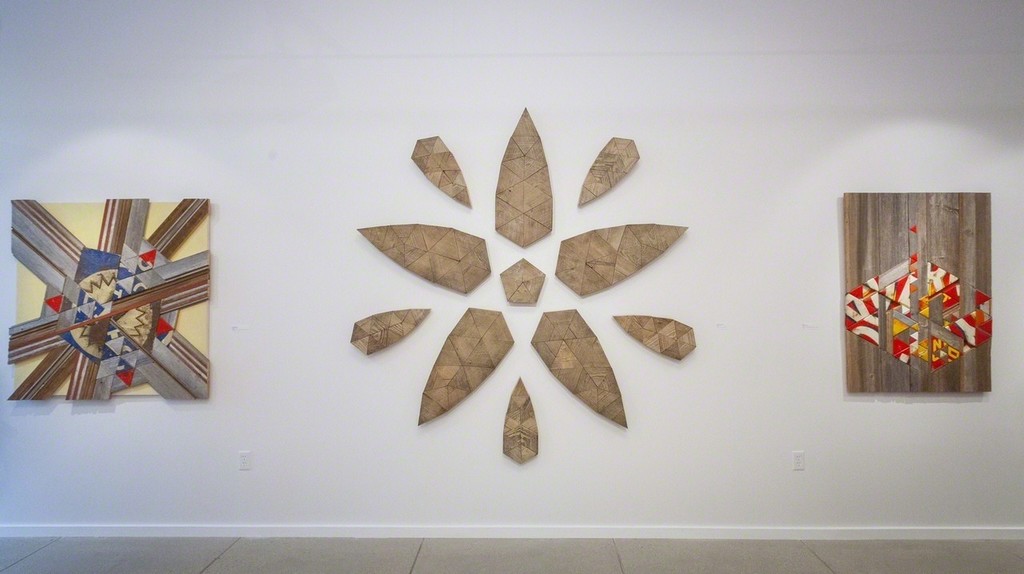 Open Mind Art Space is pleased to present "Word", a solo exhibition featuring works by artist Benjamin Lowder. An artist talk moderated by art critic Shana Nys Dambrot and featuring FUN Gallery founder Patti Astor, will be held on Saturday, August 6th at 5:00 PM, followed by an opening reception for the artist from 7:00 PM - 10:00 PM. A closing reception will be held on Friday, September 16th from 6:00 PM - 9:00 PM. The exhibition will be on view from August 6th through September 17th, 2016.

"Word" is a collection of mixed media works by artist Benjamin Lowder, in which each work is made primarily out of vintage signage and reclaimed lumber. The exhibition is attributed to the underlying order in the world that is hidden behind surface appearances. "Word" builds upon the ancient Greek and Semitic idea that "The Word" is the creative principle that brings order out of chaos. This order is evident in the reoccurring geometry and patterns found throughout the material world, and it is also recounted in the many mythologies created across time and cultures who attempt to communicate truth that is ironically beyond communication. Lowder applies the ancient concept of "The Word" within a contemporary context by identifying the continued and effective use of advertising and graffiti art to shape our current reality through words and symbols. Thus, it is Lowder’s intent to transform these artifacts from the 20th Century into totems that reference the ancient creative principle of "The Word."

Benjamin Lowder’s work combines myth, math and magic to create totems and assemblages out of reclaimed wood and vintage metal signage. These repurposed industrial and commercial materials are transmuted into art objects that direct people’s attention and reverence toward Nature’s divine design. “My intention is to draw people’s awareness to Nature’s sacred geometry by expressing the forms and patterns that are the universal building blocks of material growth structures. This matrix of geometry naturally occurs as the total collective of ideas crystalizes and draws balance out of chaos. Aligning our thoughts and creations to these elemental forces will put us on an evolutionary path toward an abundant future. We are working here and now to ensure that this potential future is brought into existence,” says Lowder.

Benjamin resides in Otter Lake, Illinois, where he built his sustainable home and studio using reclaimed lumber from old barns and industrial buildings. It was through the use of geometry in designing and building a home in balance with the natural environment that his passion for expressing that geometry in his artwork took root. Drawing on an education from the University of Illinois in semiotics (the study of how humans apply meaning to symbol systems like mythology, language and arts), Lowder worked for 15 years as an award winning commercial artist and designer until dedicating himself to using the magic of symbols and mythology for the creation of fine art. Lowder also currently works as the Creative Director at Buckminster Fuller’s geodesic domed cathedral on the campus of Southern Illinois University. http://www.benjaminlowder.com