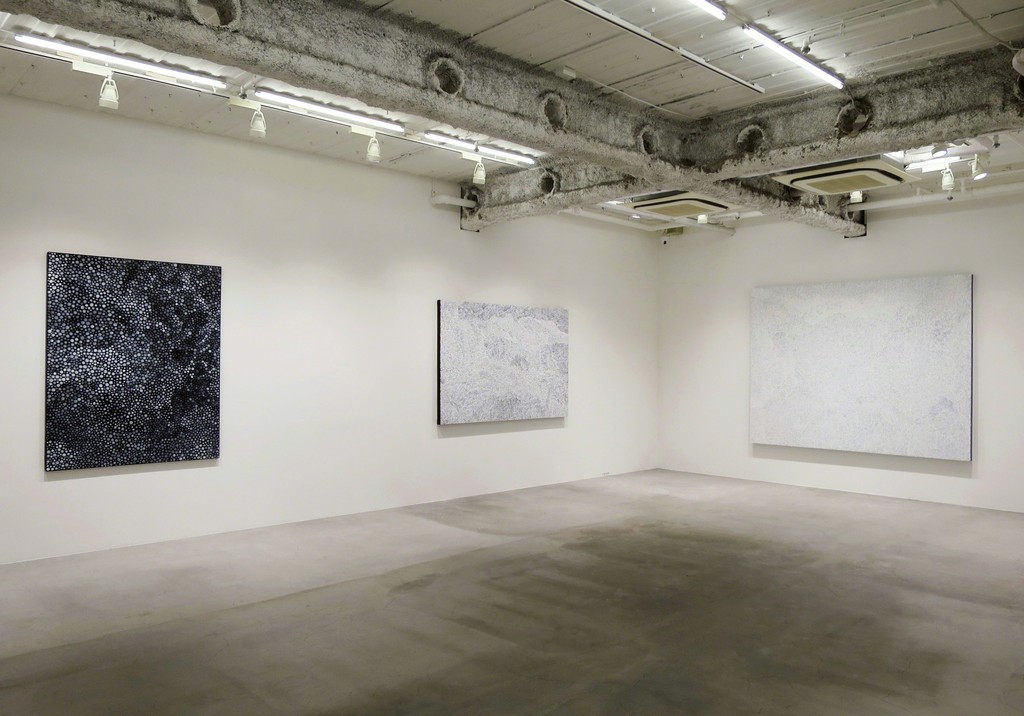 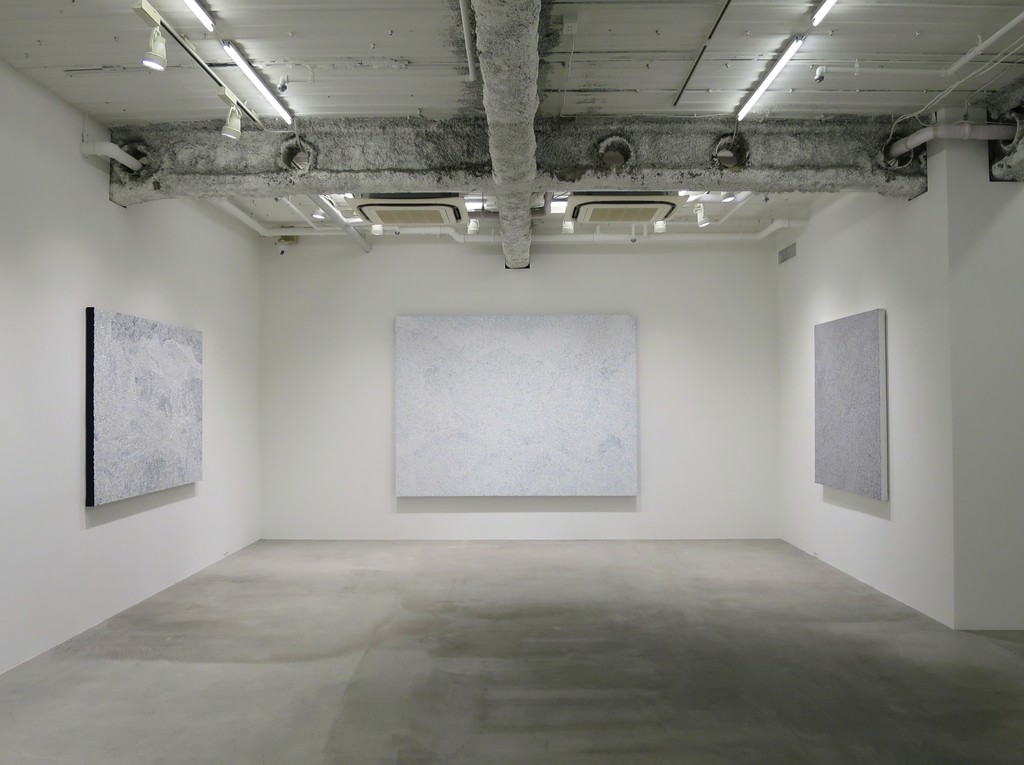 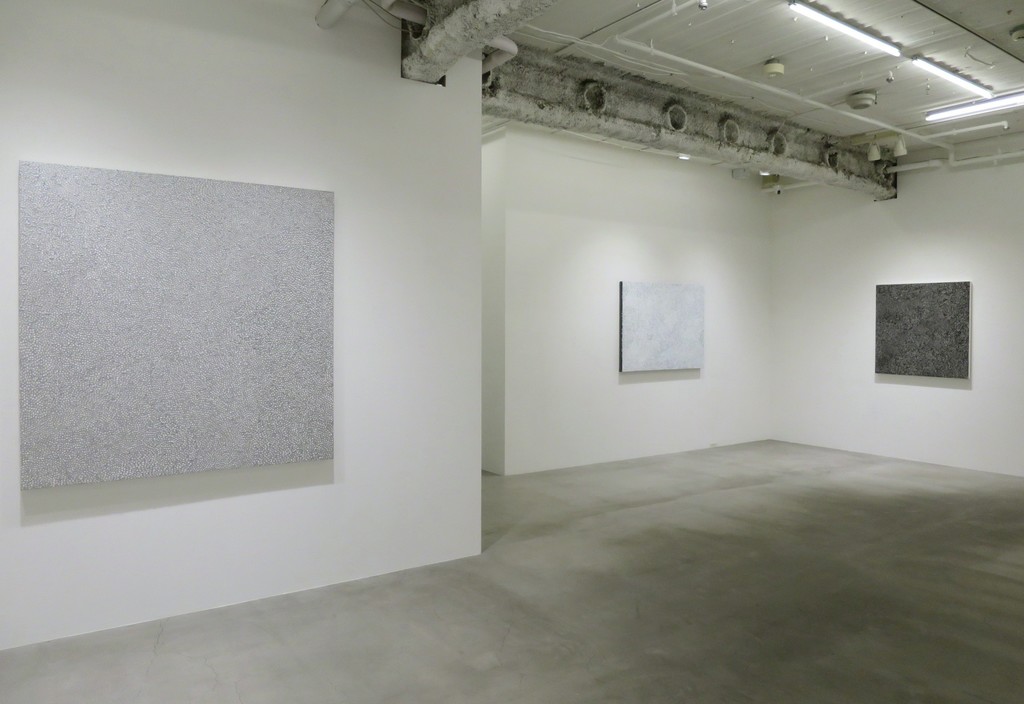 Yayoi Kusama is the only Japanese who has been featured in the American magazine TIME’s 100 Most Influential People in April 2016. She was named ‘World’s Most Popular Artist’ based on a survey of museum attendance around the world by The Art Newspaper in 2014, and her large-scale retrospective exhibition toured around East Asia, Latin America and Scandinavia in the following year. From 2017 onwards, North America and Southeast Asia tours have been scheduled and its energy has no bounds.

On this occasion, Ota Fine Arts is delighted to introduce a painting series entitled ‘Infinity Net’ which reveals the monochrome view of Yayoi Kusama. At first sight, each surface seems to be painted with a single colour of white or grey, however, in detail the paintings are filled with the accumulation of infinity arcs drawn by elaborate brush strokes. The irregular bumps produced by each arc, and their continuously changing surfaces caused by the light and each of their shades, maintains a strong materiality and creates an eternally repeating rhythm which intrigues the audience.
Kusama nowadays is well known for her colourful and ‘pop’ works, as well as polka dots and pumpkin motifs, however the starting point can be said to be the monochrome ‘Infinity Net’ series. This series was shown for the first time in New York in 1959. White nets cover a black background and another layer of white glazes on top. Her high individuality and artistry is above the rareness of ‘being Japanese and female’ and received praises from art critics such as Donald Judd and Dore Ashton.
According to Kusama the meshes of a net is a reversal image of accumulated polka-dots, and these two are in negative-positive relations. Where does the starting point for this repetitive method for such patterns lie? - I would cover a canvas with nets, then continue painting them on the table, on the floor, and finally on my own body - Kusama who had been experiencing hallucinations where her surroundings get covered completely with one pattern of polka-dots or nets, overcame her fear by repeatedly painting the same motif obsessively which relieved her own internal images.
Kusama, who has now become a worldwide artist, continues to paint ‘Infinity Net’ occasionally, as if to return to her starting point, suggesting that it is an essential series for the artist. This exhibition presents five ‘Infinity Net’ paintings including three new works painted for this occasion, and one ‘Polka-Dot’ painting. We look forward to welcome you to the monochrome world of Yayoi Kusama.

Yayoi Kusama has been highly valuated as a vanguard of pop art and minimalism which are important art movements in the late 20th century. Painting, drawing, collage, sculpture, performance, video, print, installation, environmental art, literature, fashion and product design… Kusama’s artistic activities lightly go beyond their fields, and her attitude of vigorously creating new works captures the hearts of people around the world.
The artist was born in Matsumoto, Nagano prefecture in 1929. After studying painting in the modern Japanese Nihonga style in Kyoto, she moved to New York in the late 1950s. Kusama establishes her career as an avant-garde artist through stimulating happenings and exhibitions until the mid 1960s. From 1980 onwards she became widely known through international solo exhibitions, and the opportunity matured for re-evaluation at the 45th Venice Biennale in 1993. Thereafter she has held solo exhibitions throughout the world such as New York MoMA, Tate Modern, Pompidou Centre. Currently a Scandinavian tour exhibition ‘IN INFINTY’ is taking place at Moderna Museet (until 11 September 2016). The exhibition covers the artist’s career of nearly 80 years comprehensively and has shown in Louisiana Museum of Modern Art (Denmark), Henie Onstad Kunstsenter (Norway) and will go around to Helsinki Art Museum this October.