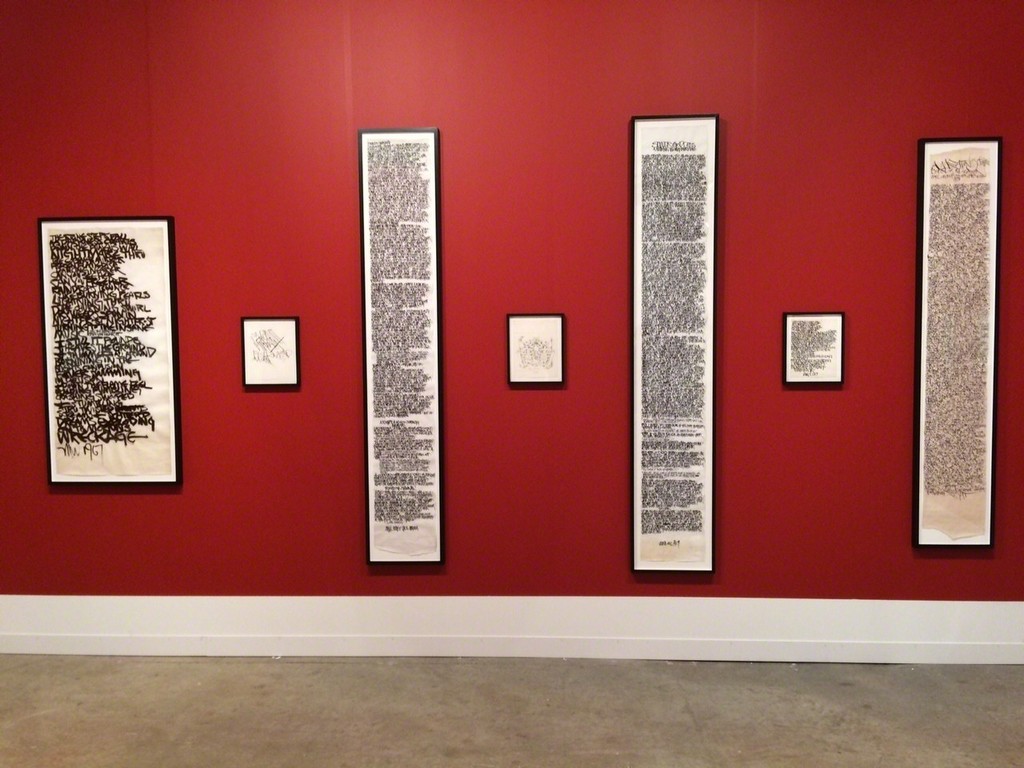 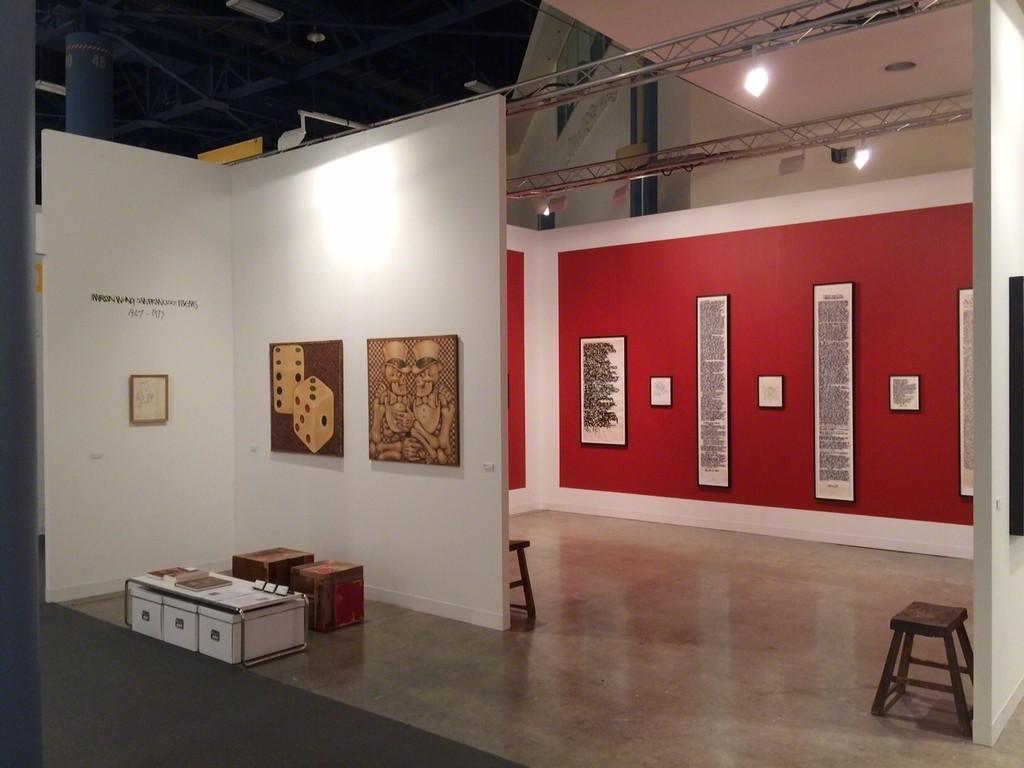 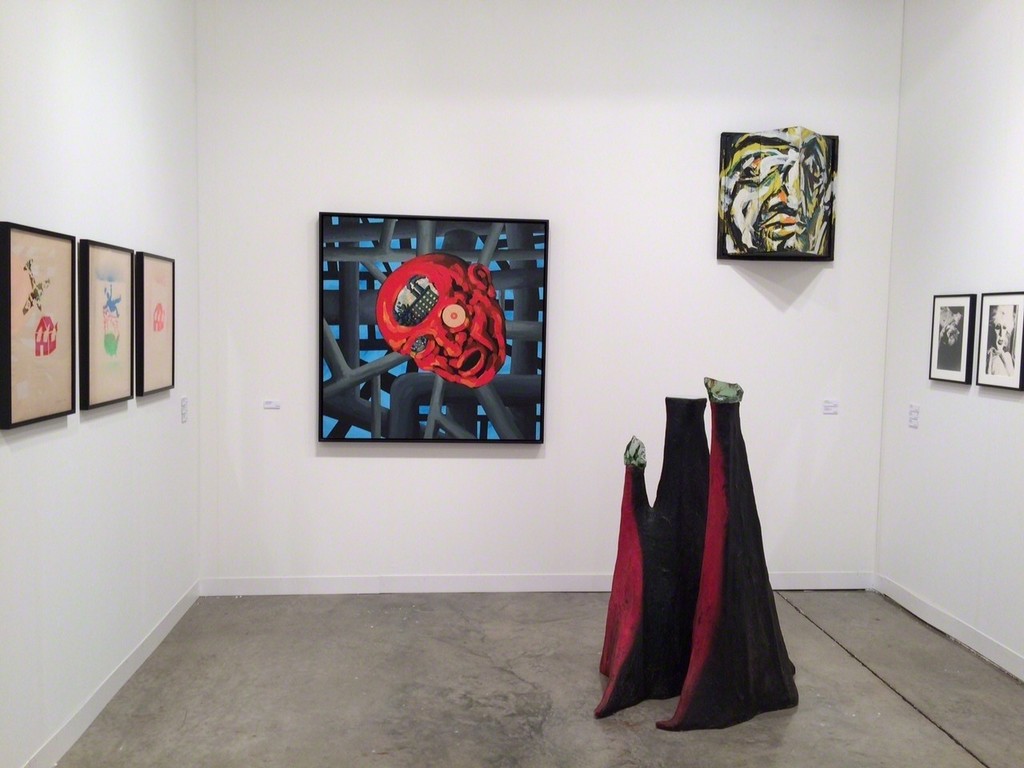 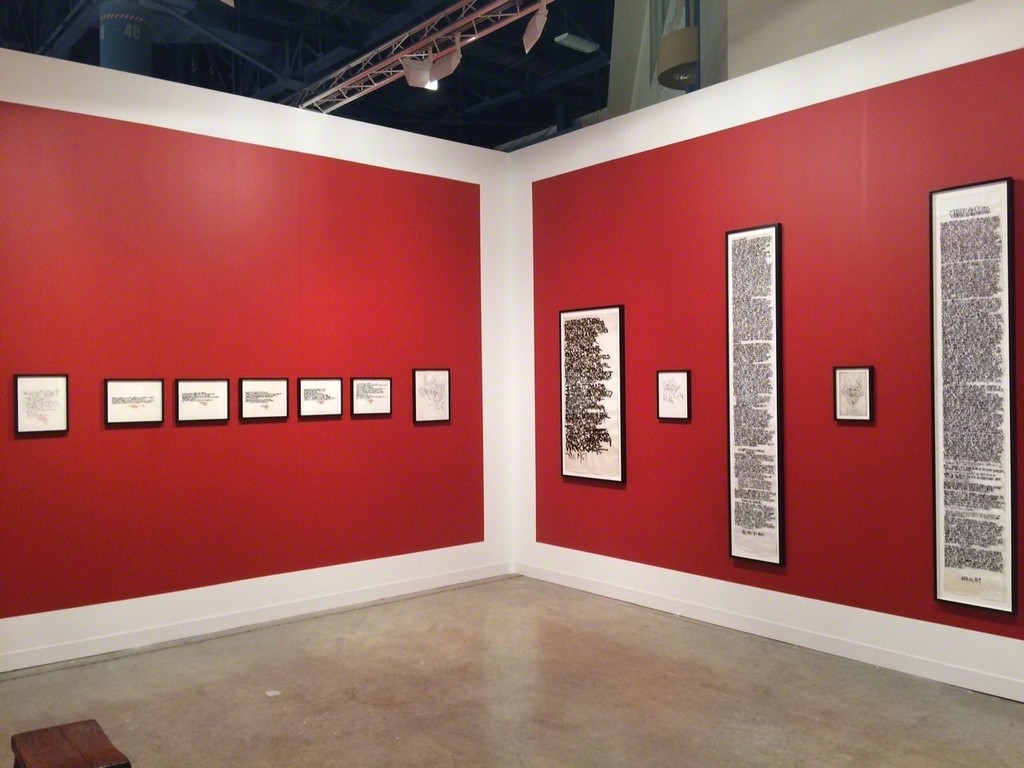 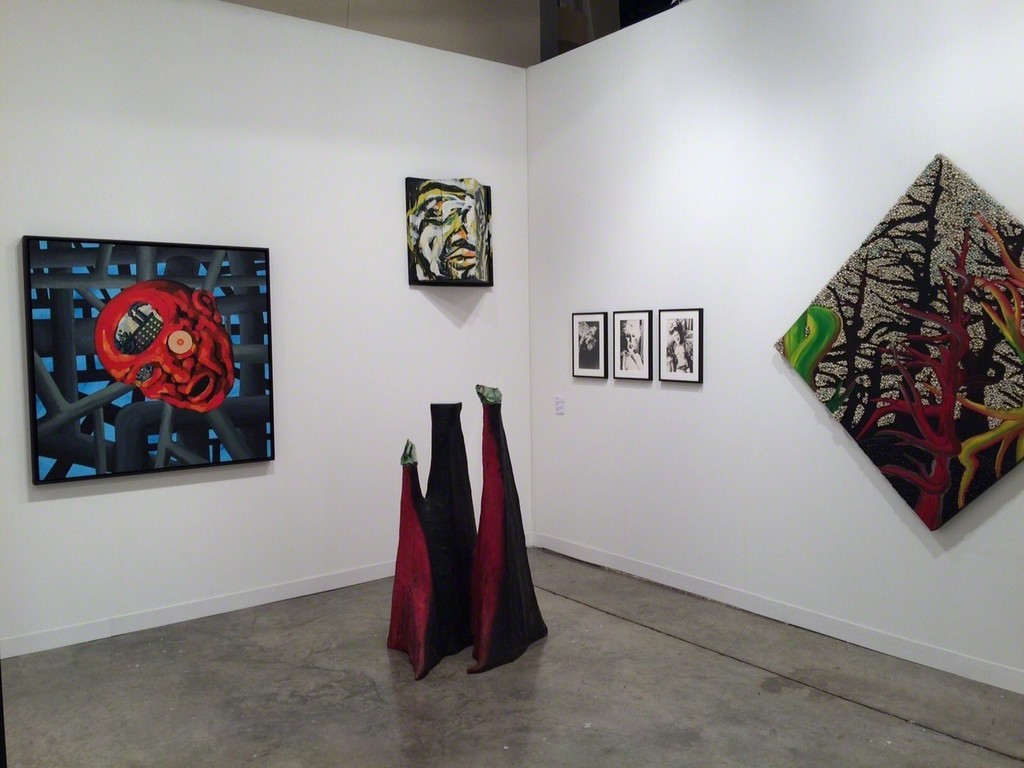 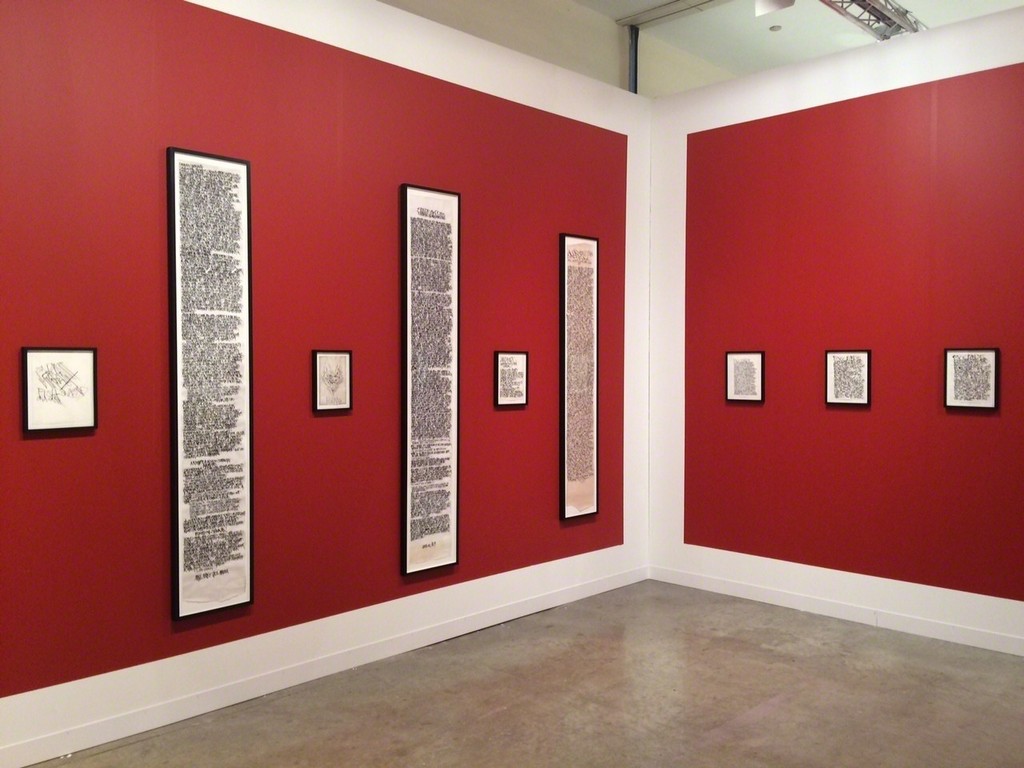 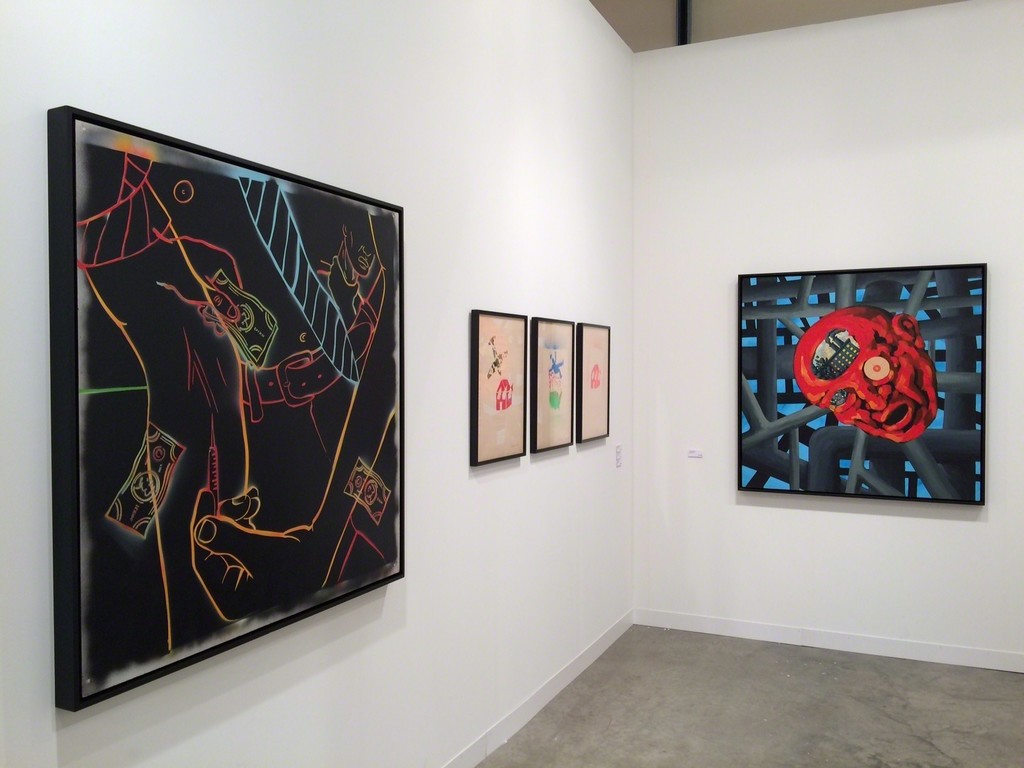 Martin Wong (1946-1999) P.P.O.W is pleased to present, many for the first time, Martin Wong's poetry scrolls, created in San Francisco between 1967 and 1973. Wong's works address the artist's personal, poetic and social concerns, reflecting a sense of compassion and self-identification that still resonates today. He studied ceramics at Humboldt State University, graduating in 1968. During the '70s he was active in the San Francisco Bay Area art scene, and was involved with the performance art groups The Cockettes and Angels of Light. In 1978 he moved to Manhattan, eventually settling in the Lower East Side, where his attention turned exclusively to painting. Wong set forth to depict urban life on the Lower East Side where he then lived. Through his visual diary he built a landscape of stacked bricks, crumbling tenements, constellations and hand signals. His narratives were populated by the neighborhood's denizens including firemen, the incarcerated, graffiti artists, and families, including his friend and poet, Miguel Piñero. Wong died in San Francisco from an AIDS related illness in 1999. Wong's work can be found in museum collections including: The Metropolitan Museum of Art, The Museum of Modern Art, The Bronx Museum, de Young Museum, The Art Institute of Chicago, Whitney Museum of American Art, San Francisco Museum of Modern Art and The Cleveland Museum of Art. He had a one person show Sweet Oblivion at the New Museum in 1998. In 2013 the exhibition City as Canvas: New York City Graffiti from the Martin Wong Collection, organized by Carlo McCormick and Sean Corcoran, opened at the Museum of the City of New York. Wong's retrospective, Human Instamatic, is currently open at the Bronx Museum of Art through February 2016.

David Wojnarowicz (1954-1992) channeled a vast accumulation of raw images, sounds, memories and lived experiences into a powerful voice that was an undeniable presence in the New York City art scene of the 1970s, 80s and early 90s. Through his several volumes of fiction, poetry, memoirs, painting, photography, installation, sculpture, film and performance, Wojnarowicz left a legacy, affirming art’s vivifying power in a society he viewed as alienating and corrosive. Wojnarowicz died of AIDS-related complications on July 22, 1992 at the age of 37. His artwork has been included in solo and group exhibitions around the world, at institutions such as The Museum of Modern Art, New York; Museum of Contemporary Art, Chicago; The American Center, Paris, France; The Busan Museum of Modern Art, Korea; Centro Galego de Art Contemporanea, Santiago de Compostela, Spain; The Barbican Art Gallery, London; and the Museum Ludwig, Cologne Germany. His works are in permanent collections of major museums internationally and the subject of significant scholarly studies. Highly influential to the current generation of artists, writers and activists, his work continues to be subject of important exhibitions. Wojnarowicz has had three retrospectives: at the galleries of the Illinois State University in 1990 curated by Barry Blinderman; at the New Museum in 1999 curated by Dan Cameron; and his forthcoming traveling retrospective will open at the Whitney Museum of American Art in the Fall of 2016, co-curated by David Kiehl and David Breslin. Among his numerous books, published by Random House and Grove Press, among others, his memoir, Close to the Knives has recently been translated into French. In 2013, historian Cynthia Carr released an acclaimed biography on Wojnarowicz entitled Fire in the Belly. Throughout 2015 and 2016, Wojnarowicz’s work will be featured in Art, AIDS, America, an exhibition traveling to the Museum of Contemporary Art, Los Angeles, CA; the Tacoma Art Museum, Tacoma, WA; the Zuckerman Museum of Art, Atlanta, GA; and the Bronx Museum of Art, New York, NY. In February 2016, works from the Rimbaud Series will be included in Performing for the Camera at the Tate Modern, London.

Arch Connelly (1950-1993) was born in Chicago and received a bachelor’s degree in 1973 from Southern Illinois University, where he majored in ceramics. He lived in San Francisco until 1980, when he moved to New York City. His first solo show in the city was at Artists Space in 1980, and the following year Connelly had the first of four solo shows at Fun Gallery. Connelly was best known for his jewel encrusted wall reliefs, paintings and freestanding sculpture. Embellished without restraint, his work achieved an elegant, surreal quality. Connelly's work is most associated with the pattern and decoration trend of the mid-70’s in high contrast to the popular minimal and conceptual schools of the time. His use and adornment of everyday objects speaks to the American pop Art movement of around the same time. Connelly was relevant at a time when many other gay men were flourishing in the art world, and he found allies among David Wojnarowicz, Martin Wong, Keith Haring, and Nicholas Moufarrege, many of which showed at Civilian Warfare. Unfortunately the East Village, although rich in art also took a huge toll with the AIDS epidemic, many of its art stars falling to untimely deaths due to AIDS and related complications. Since his death in 1993, Connelly has had two solo exhibitions, one of which (Arch Connelly: Works 1981-1993) traveled to four different locations around Illinois. He has been exhibited internationally in Japan, Sweden, France, Italy, Germany, and Holland, alongside many spaces in New York.

Luis Frangella (1944-1990) was born in Buenos Aires, and began to paint in the mid-1970's during a fellowship at the Center for Advanced Visual Studies at MIT in Cambridge, MA. He moved to New York City in 1976, and in the early 1980's Frangella helped to organize some of the first exhibitions at Limbo, an artists' after-hours club known for its art shows and film screenings. He received a Guggenheim Fellowship in 1982. Equally at ease between painting and sculpture, Frangella could also alternate extreme delicacy and powerful vigor in his works. His 1984 exhibition at Civilian Warfare in the East Village featured expressionistic paintings executed on old car doors that seemed to sum up the rough-edged styles of many East Village artists. In the late 1980's, Frangella had two shows at the Julian Pretto Gallery in SoHo and exhibited regularly in galleries in Buenos Aires and in Spain in Barcelona and Madrid.

Greer Lankton (1958-1996) was born Greg Robert Lankton in Michigan. At the age of 21, while attending Pratt Institute in New York, using money provided by her father's Presbyterian church, she underwent a sexual reassignment surgery. She quickly aquainted herself within the East Village art scene, creating stitched and painted soft-scultpures ranging from doll-size to life-size, using an array of materials to portray a myriad of grotesque, disallusioned, whimsical, sickly, gorgeous, and absurd characters. Many of the dolls depicted her peers, lovers, and idols, all in a dilapidated or mutated fashion. Greer’s dolls reflect her unique, isolated vantage point on both sexes, and her exploration of gender, outcasts and norms of beauty meshed with art world trends. Her final solo show was housed in the Mattress Factory in Pittsburgh, following her successful showing at the 1995 Whitney Biennial and Venice Biennale. It was just one year late that she passed away. Her work has been seldom shown since, until Participant Inc. opened LOVE ME, a retrospective in 2014, and as was stated in the press release, “the retrospective is posed to resurrect Lankton’s legacy, putting her in conversation with younger artists and giving her a proper place within queer art history.” Lankton was represented by Civilian Warfare in New York, but exhibited her work internationally. Her works are now housed in multiple private and public collections and have been reproduced in many catalogues and publications.