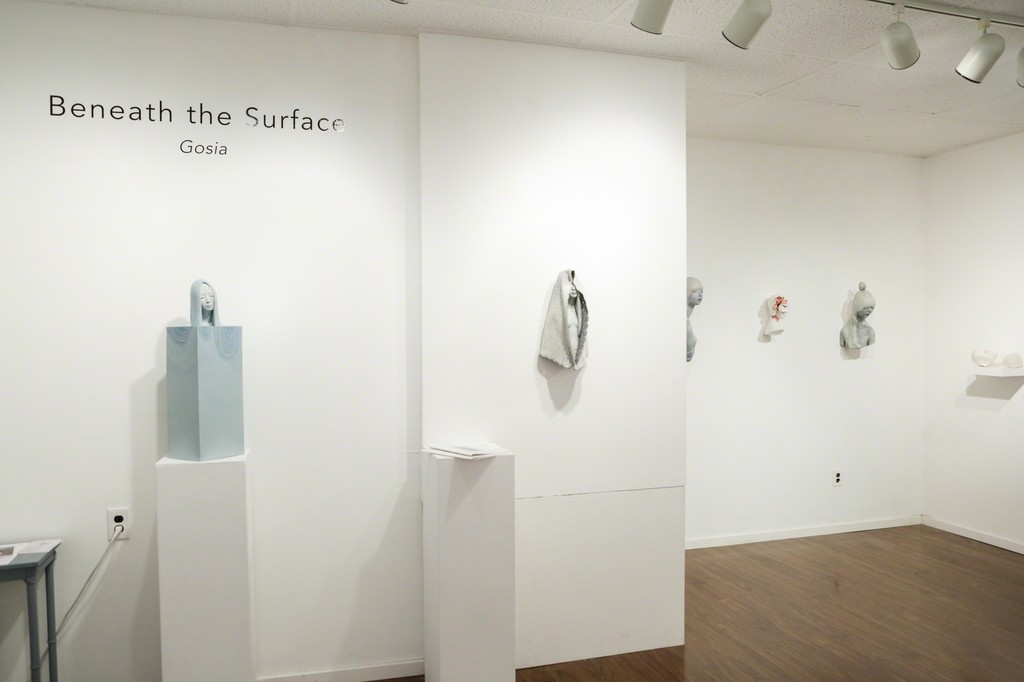 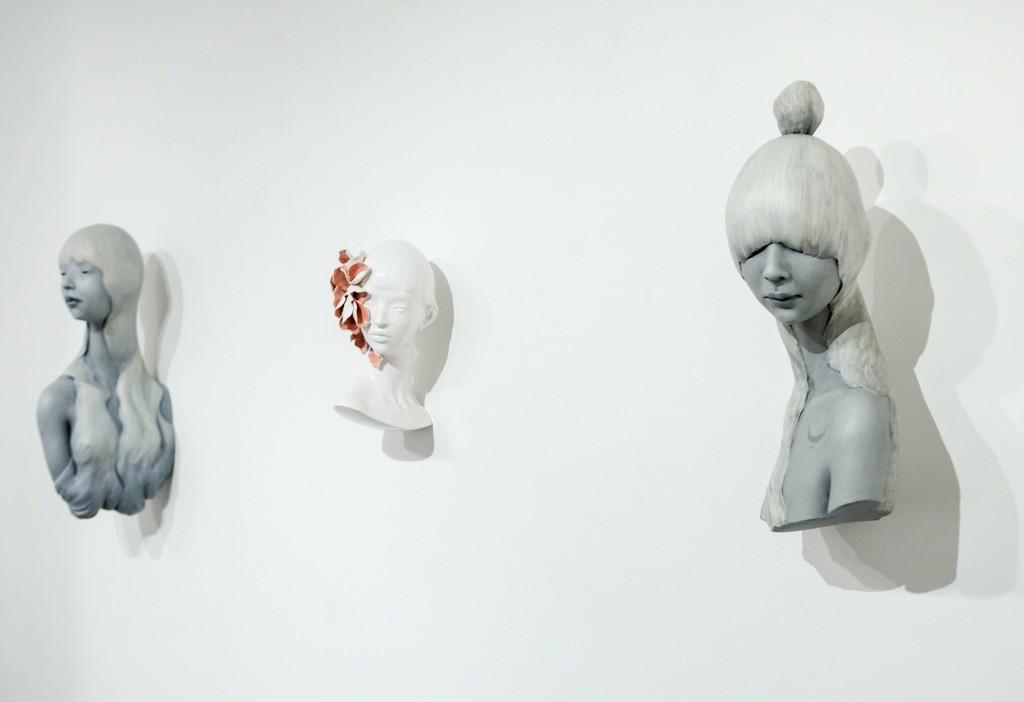 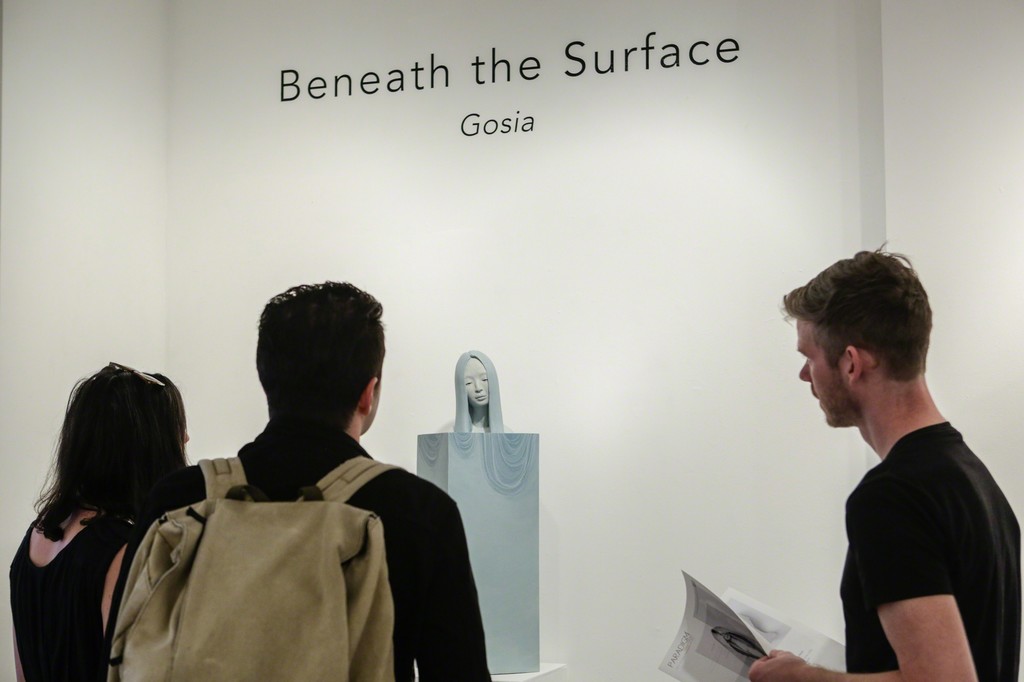 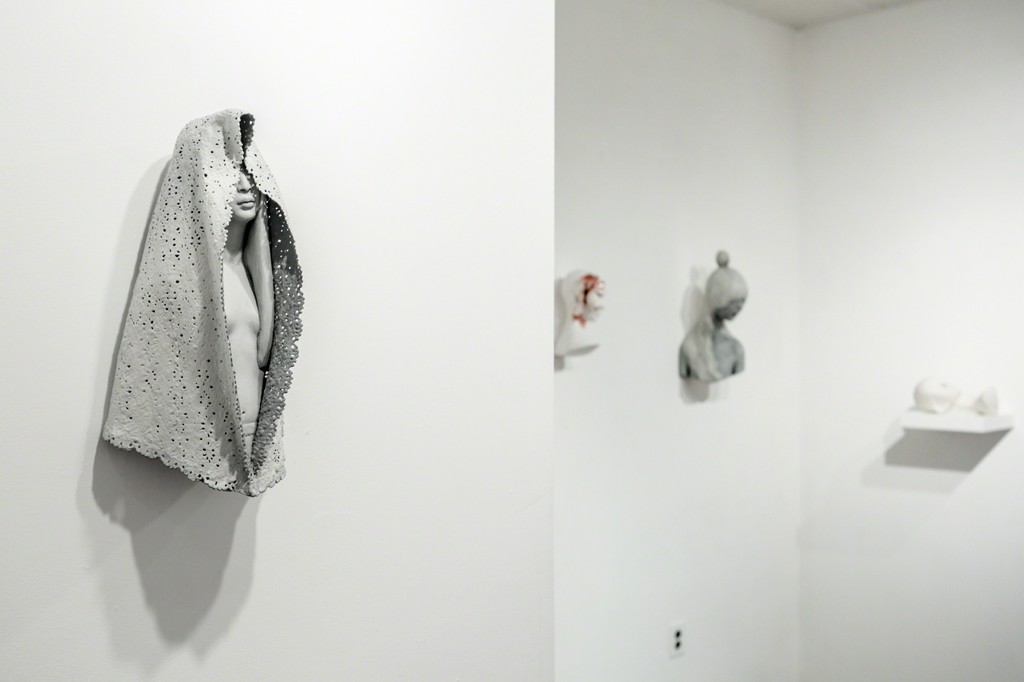 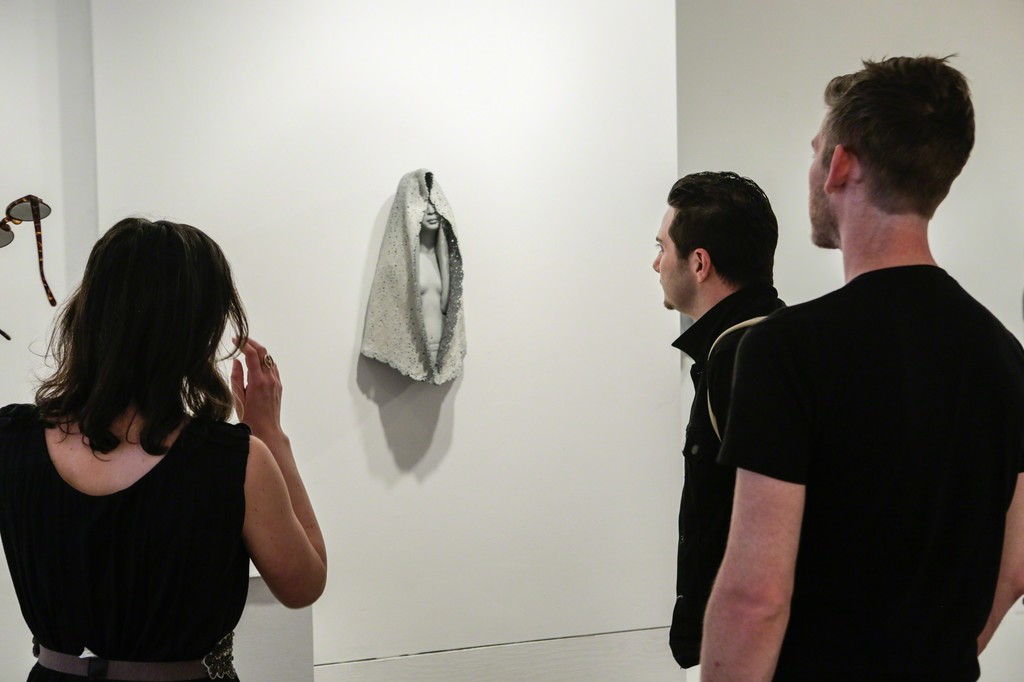 April 10, 2018 (Philadelphia, PA) - Paradigm Gallery is pleased to present two exhibitions, Emily Smith: Messy Women and Gosia: Beneath the Surface, opening April 27, 2018. Messy Women is a continuation of Smith's series of watercolor paintings on paper, surrounded by fabric. For Beneath the Surface Gosia debuts porcelain busts, a new medium for the artist, along with ceramic, polymer gypsum, and resin sculptures. While separate exhibitions, each artist explores the human tendency to dwell in superficiality – how we are easily swayed by first impressions and
surface details – and aims to counteract it through encouraging deeper introspection by the viewer. The exhibitions will be held concurrently in the gallery until June 16, 2018.

Philadelphia-based artist Emily Smith incorporates craft into her portraiture–each painting is wrapped in a fabric frame–to construct “playful”, yet “subversive” pieces that explore female archetypes by way of a gender-nonconforming subject. Messy Women portrays the artist’s friend and collaborator, Messapotamia LeFae, as a model for the investigation into “what a woman is supposed to be.” Large, bright floral arrangements serve as the backdrop to LeFae, who is illustrated in ink in various expressive poses, evocative of emotional states of being.

In her figurative sculptures, Toronto-based sculptor Gosia expresses human intuition and introspection, crafting her painterly pieces in earthenware, resin, and polymer gypsum. To be viewed for the first time at Beneath the Surface, Gosia has begun working with porcelain to create fragile busts. Her muted greyscale busts and life-size figures are rendered in an illustrative way, with elongated limbs and downcast gazes, to communicate “inner contemplation” and
“serene melancholy.” The three-dimensional likenesses are gathered from acquaintances and/or strangers and combined with an idea of how the sculpture should be represented. Beneath the Surface brings together artwork that conveys how the inner workings of the mind are viewed externally, highlighting how these personal meditations connect us all.

Both Messy Women and Beneath the Surface impel the viewer to search the paintings and sculpture for depth beyond exterior details, extending an invitation to look closer, think harder, and contemplate existence from within.
About Emily Smith Emily Smith has exhibited in numerous solo and group exhibitions, as well as being a visiting critic and conference presenter. Smith is a recipient of a 2012 Leeway Foundation Art & Change grant which supported her exhibition In Visible Skin: Portraits of Transgender Philadelphia, which was shown at the William Way LGBT Center in 2013, the Berman Museum of Art in 2014. Her previous series, When A Man Decides to Hurt You was shown at Paradigm Gallery in 2016. She is currently the Executive Director of Philadelphia’s Magic Gardens.
About Gosia
Gosia was born in Poland in 1982, and moved to Canada in 1994. Her background in illustration from Sheridan College, and her early career as a painter have led her to passion for sculpting. Since fully dedicating herself to this medium in 2013, her sculptural works have been exhibited in galleries across Canada and the U.S. She is currently living and working in Toronto.

About Paradigm Gallery: Established February 2010, Paradigm Gallery + Studio started as a project between co-founders and curators, Jason Chen and Sara McCorriston, to create a space to make artwork, exhibit the work of their peers, and invite the members of the local community to make their own artwork in a welcoming gallery setting. Over the years, Paradigm Gallery + Studio has become a gallery of diverse contemporary artwork from around the world, while maintaining a focus on Philadelphia artists.