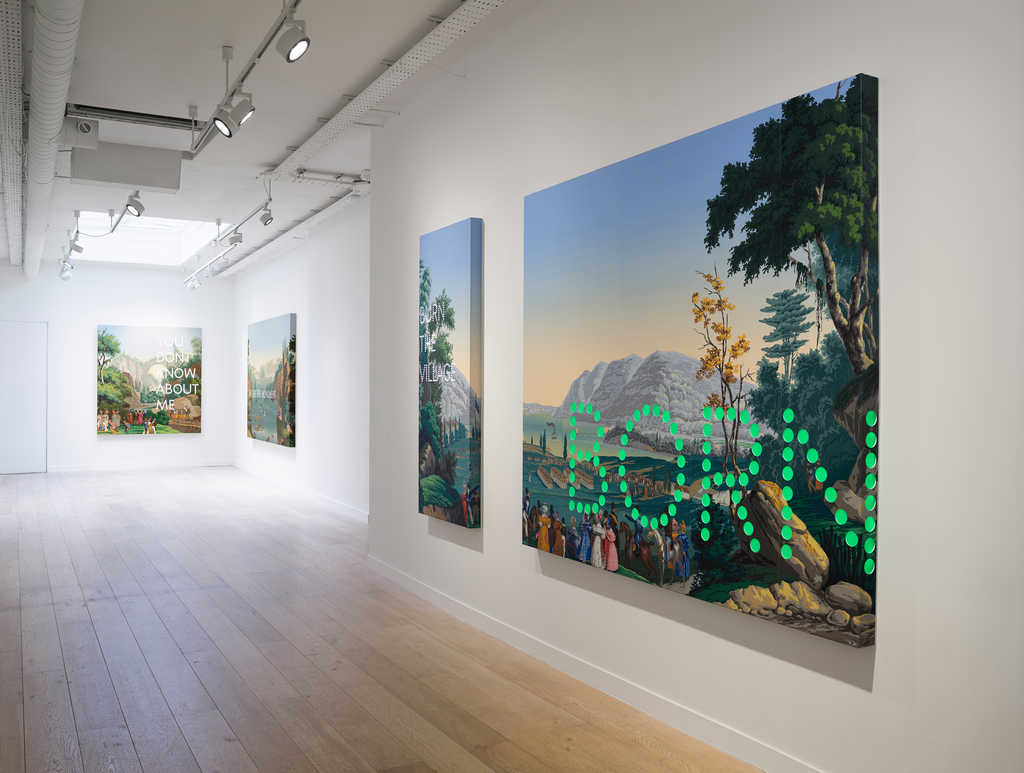 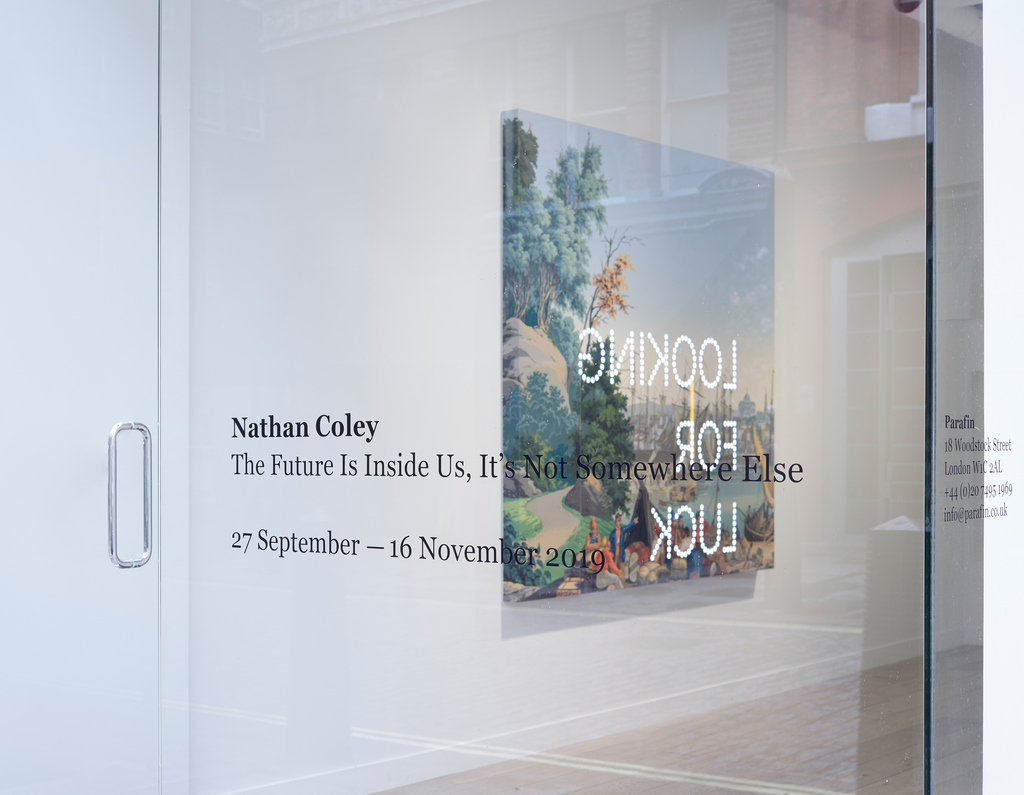 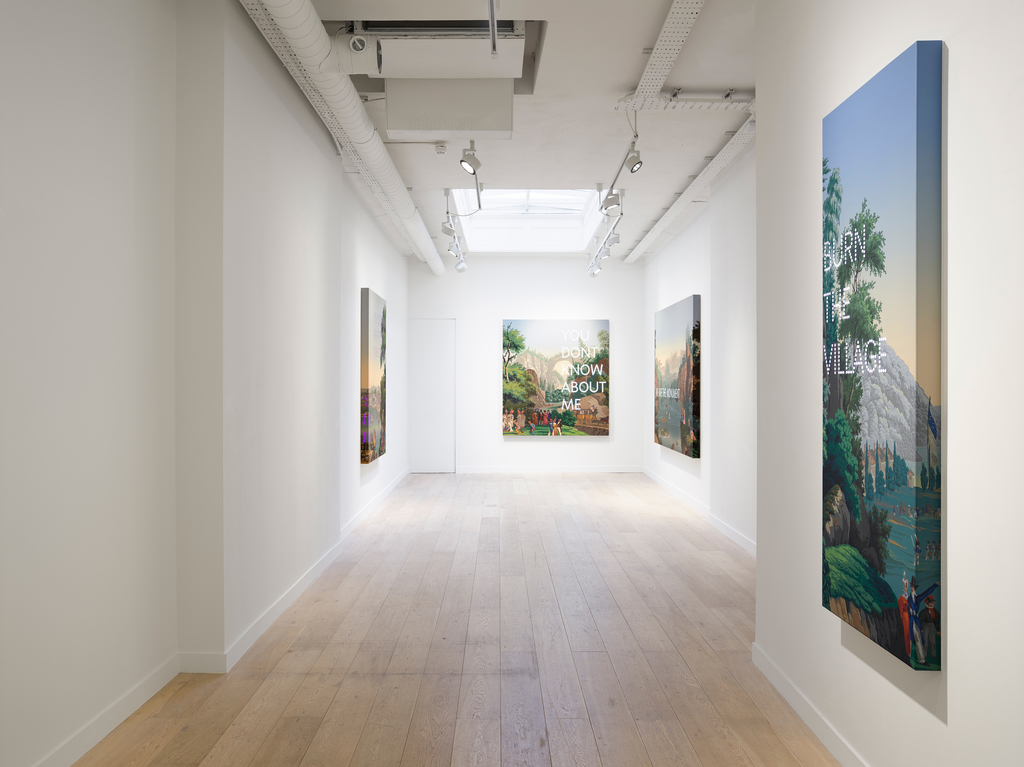 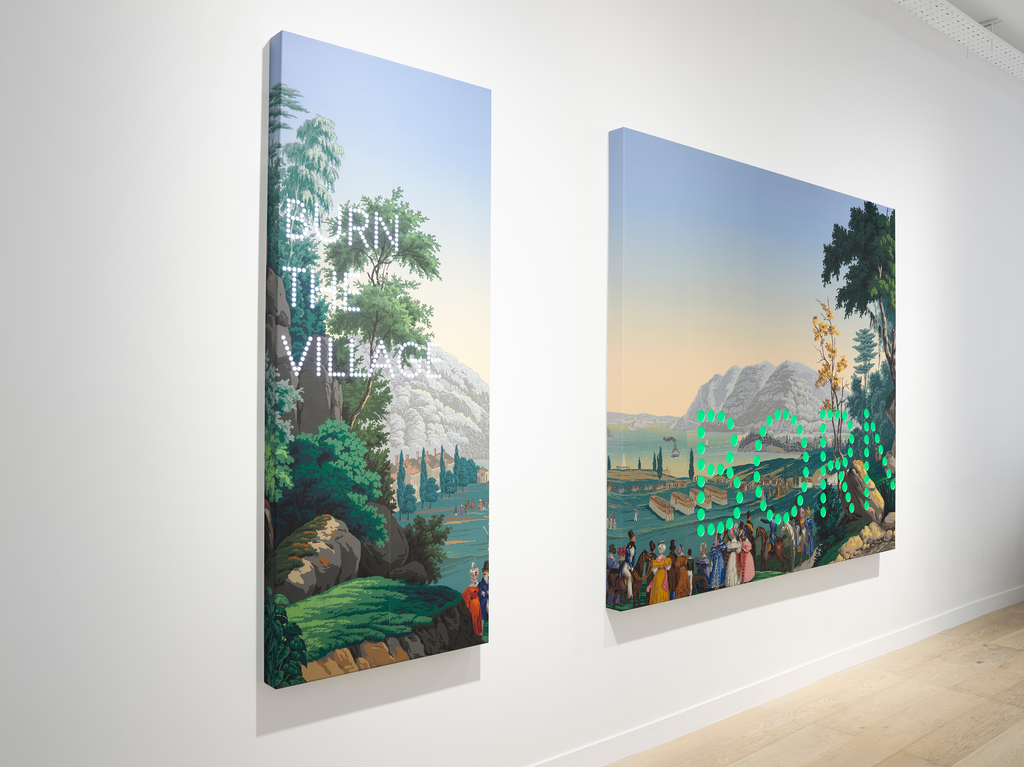 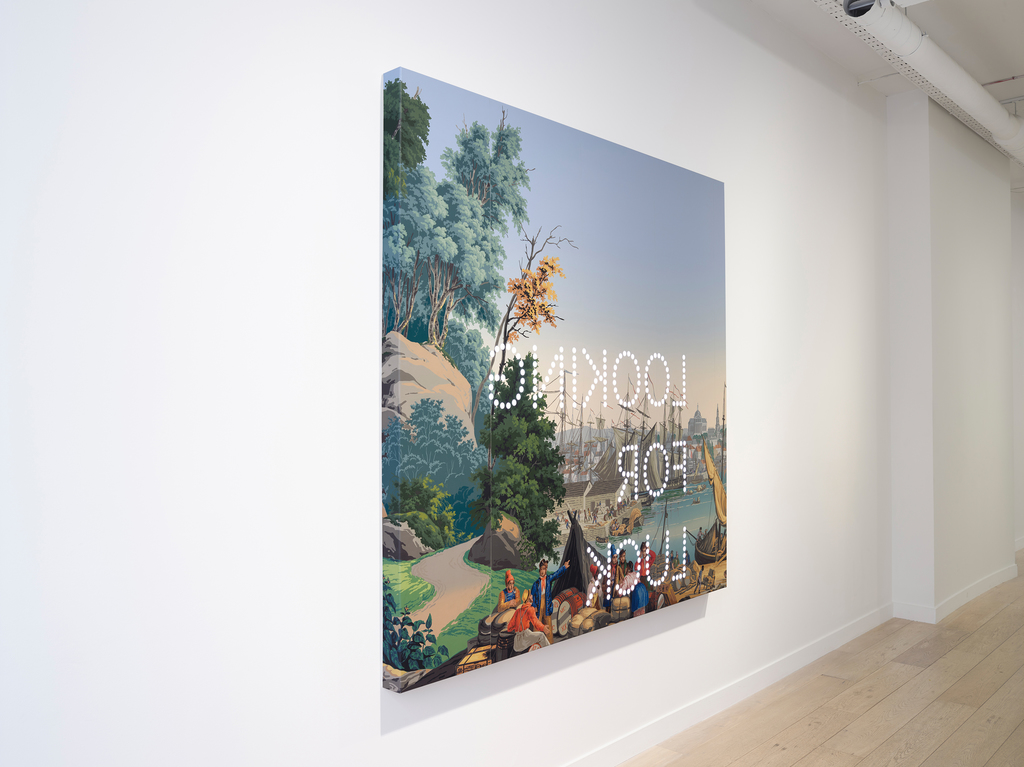 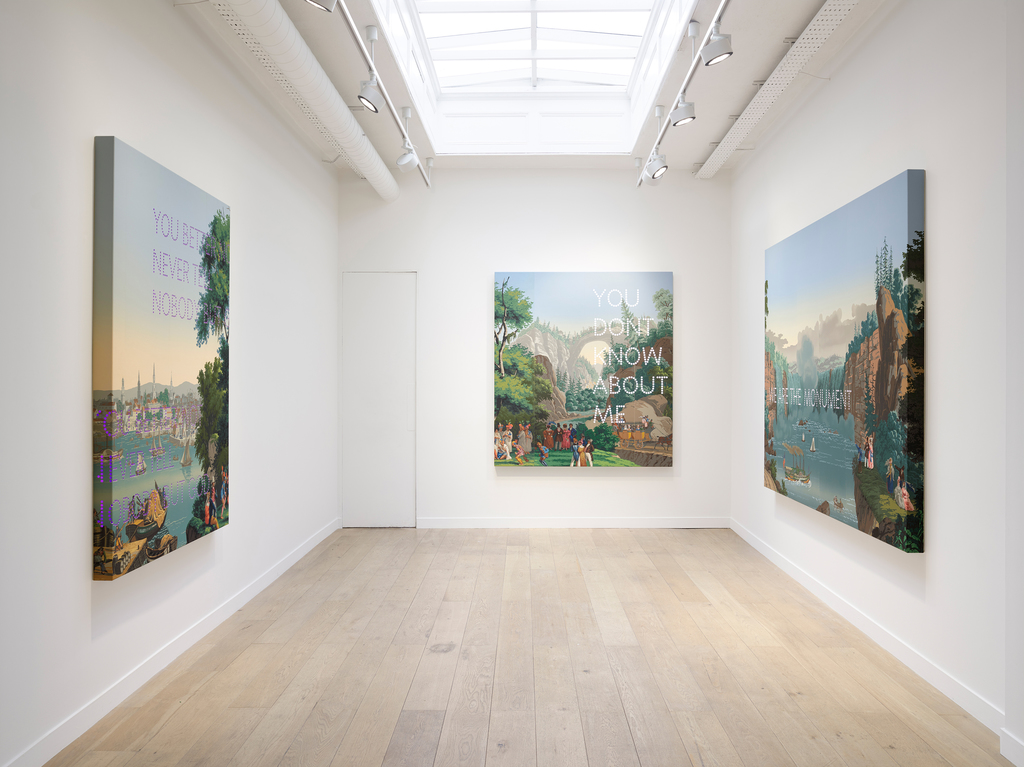 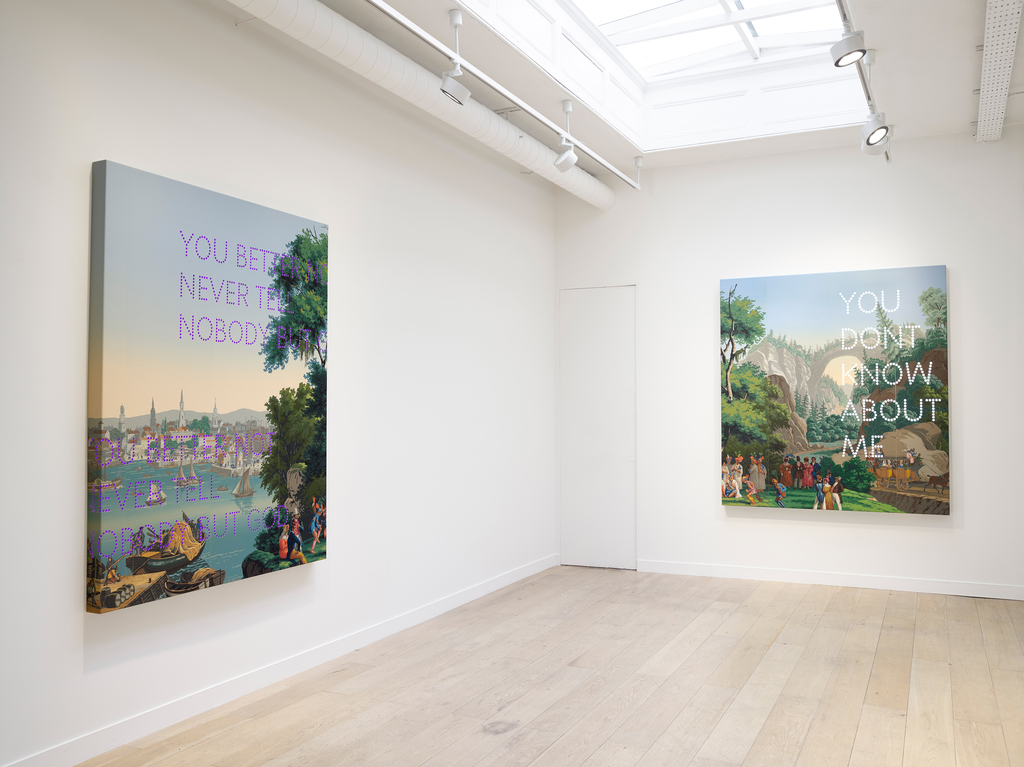 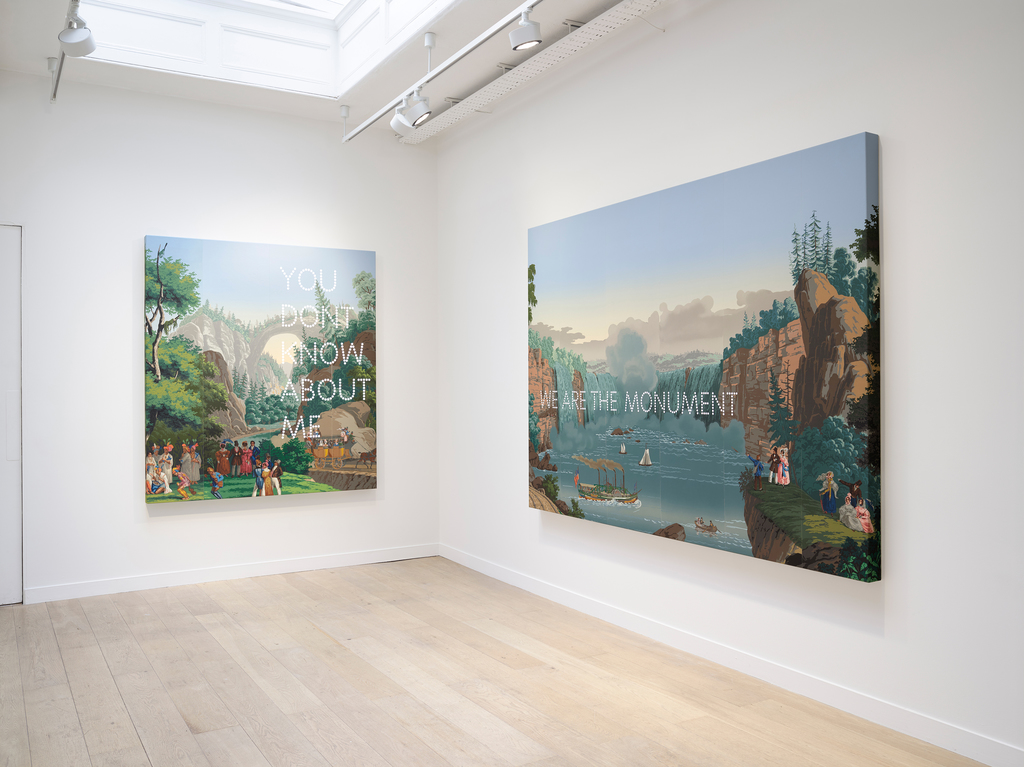 Parafin is delighted to announce a new exhibition by acclaimed British artist Nathan Coley (b.1967, Glasgow). This will be Coley’s second exhibition at the gallery.

Coley takes inspiration for his new project from the 19th-century hand-printed scenic wallpaper ‘Les Vues de L’Amérique du Nord’ (Views of North America), first produced by French printers Zuber & Cie in 1834. This exquisite hand-printed 15 metre-long design offers a panoramic view of a new world, as imagined from the old world of Europe. Still in production today, the wallpaper can be found in grand interiors throughout the world, including the Diplomatic Room of the White House, where it often forms the backdrop for important televised addresses.

Coley’s new work consists of a series of large-scale custom-made lightboxes which combine original wallpaper from Zuber & Cie with short texts selected by the artist. The sources for the texts vary from classic American literature such as Mark Twain’s ‘The Adventures of Huckleberry Finn’ (1884) and JD Salinger’s ‘The Catcher in the Rye’ (1951) to a contemporary CNN news report about migrants at the US/Mexico border. Puncturing the idealised landscapes with words and phrases ‘borrowed from the world’, Coley invites the viewer to reflect on ideas of utopia, identity and our relationship to place.

Alongside the new work, in Parafin’s lower gallery, Coley shows ‘Another Lecture’ (2011), a work that has not previously been exhibited in the UK, which takes the form of a satirical presentation about urban architecture, voiced by the actress Cate Blanchett. As with the lightboxes, Another Lecture addresses ideas about how we construct our own sense of place and environment

‘The Future Is Inside Us, It’s Not Somewhere Else’ was originally commissioned by Edinburgh Art Festival with support from Scottish Government’s Festivals EXPO Fund, and additional support from by Zuber & Cie.