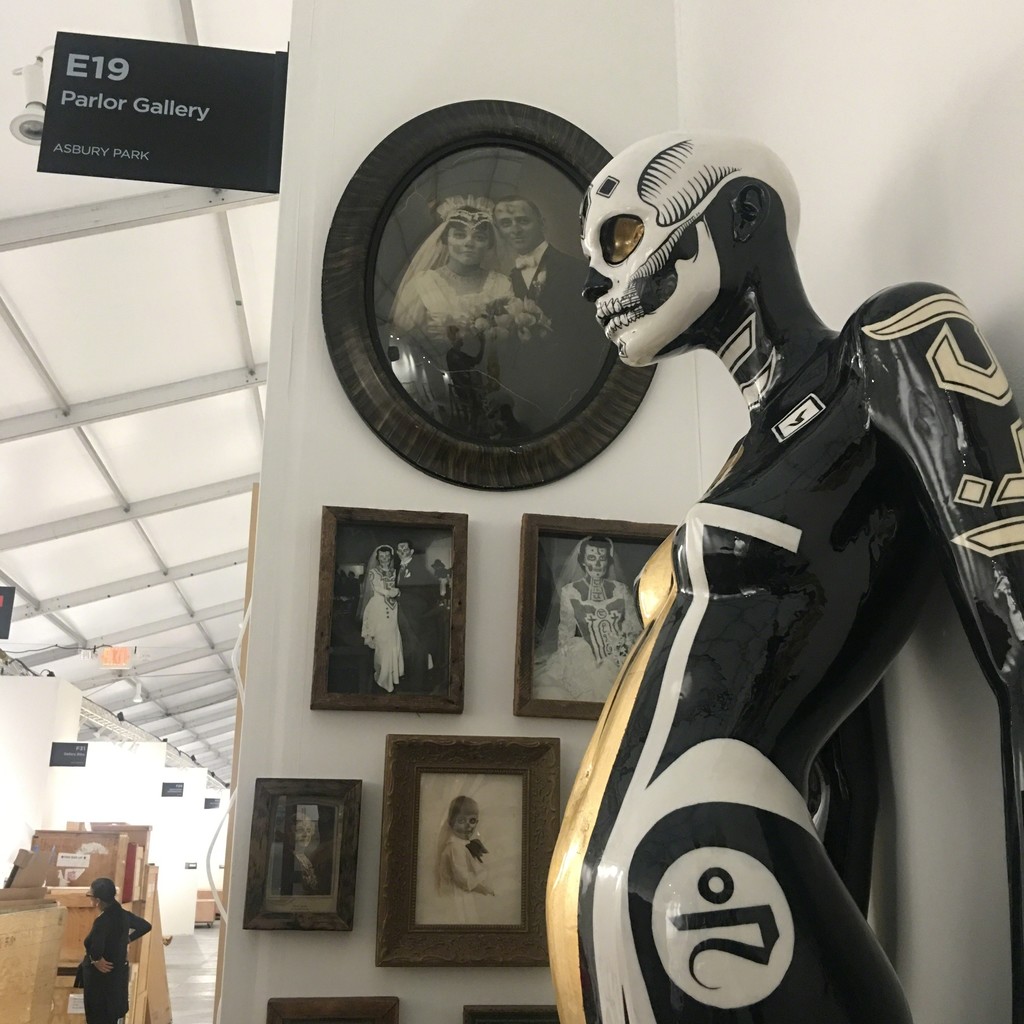 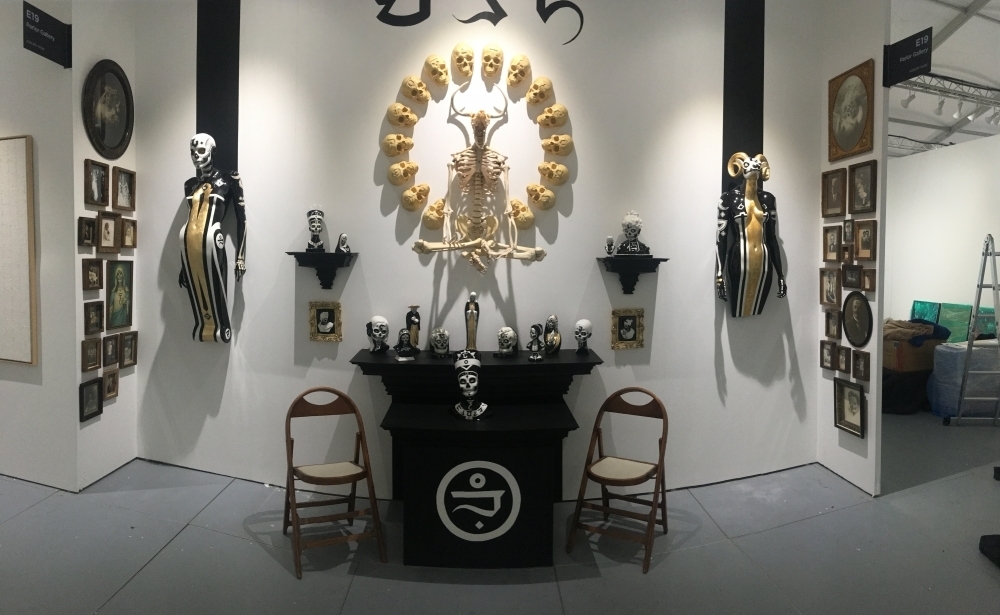 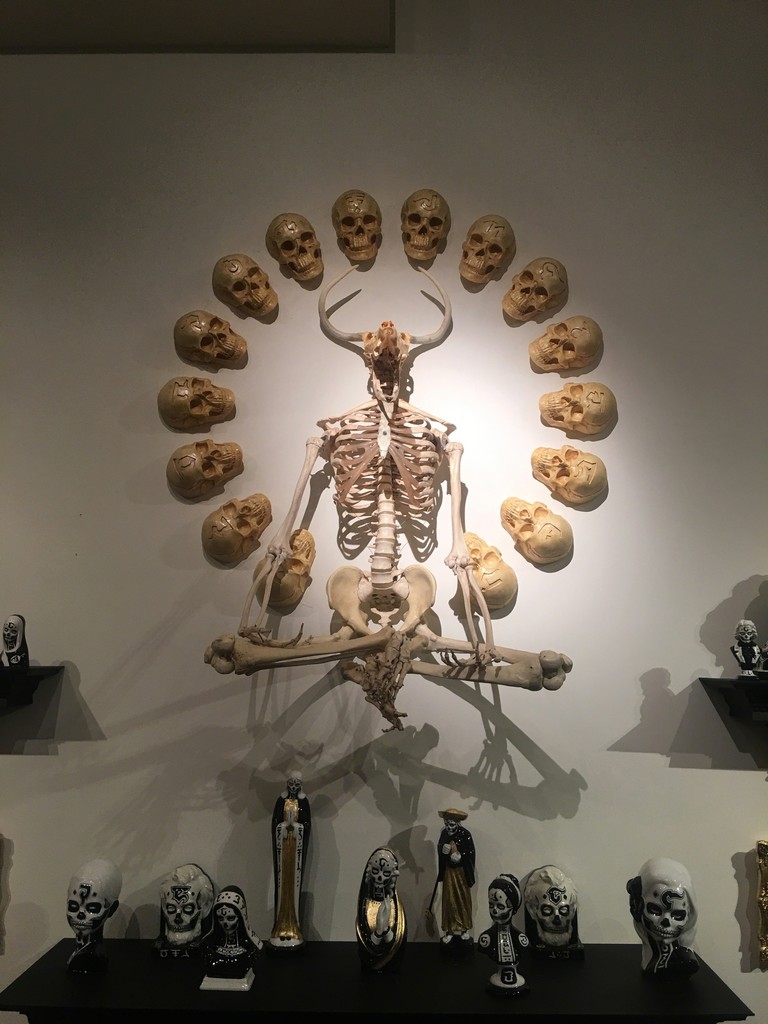 “Elucidation” is a mixed media installation that depicts a figurative realization and narrative of an imagined post apocalyptic religion called “Leviism”: giving the viewer a past, present and future view. Its deities, icons and prayer stations are relics from a distant past and a multi dimensional realm, which has its origins in ancient times. Those who channel themselves through outer body planes to connect to a polytheistic divinity, follow this esoteric religion.
Only after a catastrophic event does it make it realized in this dimension. With new awareness and perception of energy fields, this new religious sect awakens and is able to make contact with the non-physical world.

Some of the highlights of the installation are the sculptural embodiment of his fully realized female deities. “Inra”, Porkchop’s newest deity is a representation of the goddess that relays the conflict of the relationship between our living self and our spiritual self.

On the “prayer station” the viewer will find 13 effigies dedicated to this religion and a relic of a saint-like entity, entitled, “Somatic’. This relic is part man, part animal and it is the physical embodiment that represents different levels of consciousness.

The 20 characters, which Porkchop has created, have become the repeated motif that connects the works. The characters are present in all the works within the installation. They are of an imagined language and are used as prayers

Porkchop is a multi-disciplinary artist from New Jersey. He has an MFA in Sculpture from VCU and a BA from University of the Arts in Philadelphia. Porkchop has established a great presence through his magnificently scaled murals, including the extensively documented scenes he composed along the Asbury Park boardwalk in conversation with the sea. Narrative is a prevalent theme in his work. Porkchop’s mixed-media paintings and sculptures combine vintage images with darker scenarios and twisted iconography. He creates these situations by combining paint, illustration and text. He has exhibited throughout the United States and Europe and is published in “The Greatest Erotic Art of Today” Volume 2, “Eye Candy” and “I Want your Skull”.

Artist statement about his latest body of work:

Influenced by ancient block printing techniques, history and literature, the artist Porkchop sources out, manipulates, and casts familiar objects. He then painstakingly recreates their surfaces giving them a new existence into a dark and curious storyline. The application of paint into his intentional ritualistic designs followed by flawless coats of glossy resin is an act of pure precision and care, like the work of a surgeon or mortician.

There are often unexpected but pleasant marriages of imagery and object. By stripping these pieces of his usual vibrant palette, Porkchop's choice of black & white emphasizes the narrative in the works, which becomes difficult to ignore. Presenting these pieces in symmetry creates an alter that pulls the stories altogether