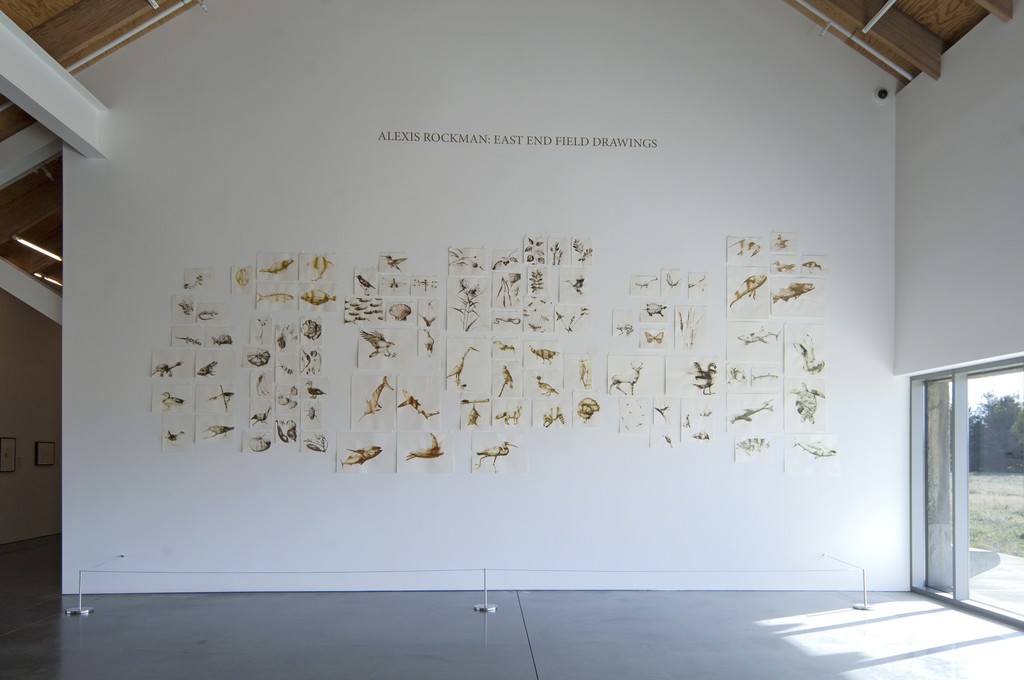 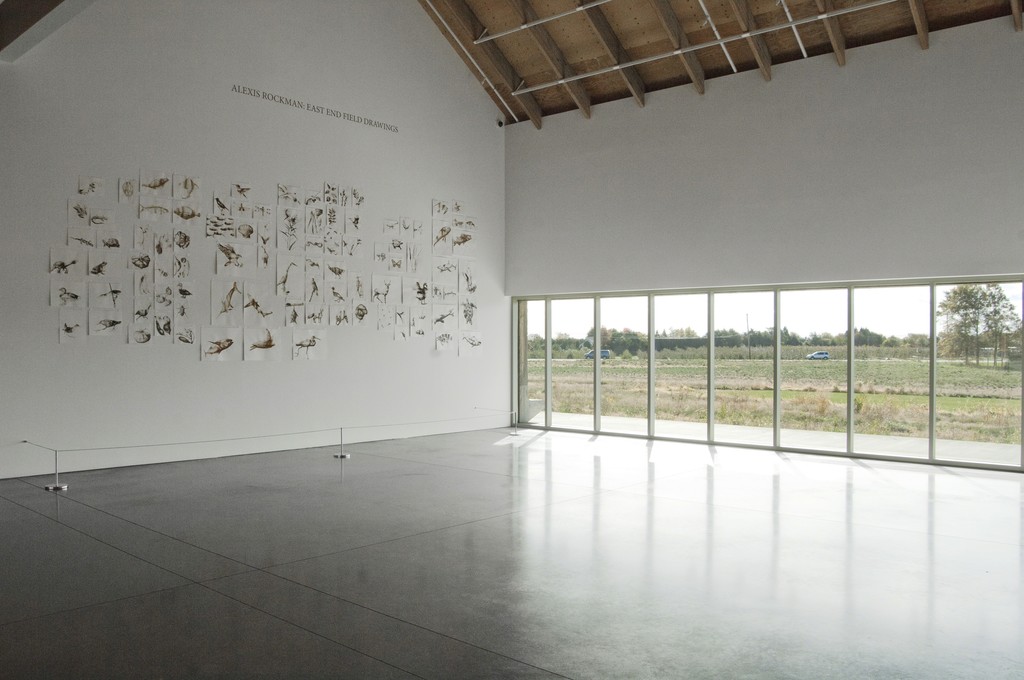 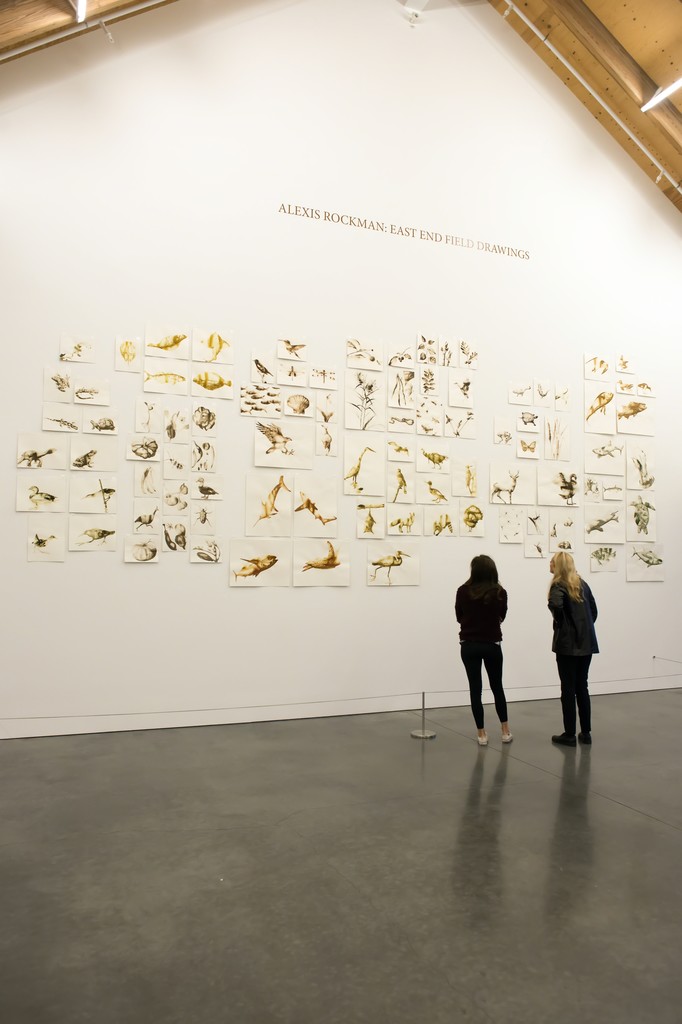 WATER MILL, NY 9/16/2015—From October 25, 2015 through January 18, 2016, the Parrish Art Museum will present Alexis Rockman: East End Field Drawings, an exhibition of 93 works on paper by the American artist who adapts an unconventional, ancient technique of depicting images of flora and fauna, while referencing the straightforward approach of a naturalist’s field guide, to explore humanity’s impact on nature. Created with organic matter such as soil and sand gathered at ponds, parks, beaches, and farms on the East End of Long Island, the drawings depict the plants, insects, birds, and animals specific to the area, emphasizing the endangered species that are rapidly disappearing from our world under the pressure of development and construction.

“The Parrish continually seeks out new ways to illuminate the creative process and demonstrate how art and artists can transform our experiences and understanding of the world and how we live in it,” said Parrish Art Museum Director Terrie Sultan. “Rockman’s East End Field Drawings are visually seductive and intellectually compelling, providing opportunities for visitors to see and experience a key aspect of our surroundings in the context of what should be our overarching concerns about the future.”

Rockman is perhaps best known for his monumentally scaled, multi-layered paintings—rich depictions of landscapes that might exist in a future impacted by climate change and the influence of genetic engineering on evolution. The works are inspired by futurism, science fiction, and fantasy, yet rooted in the grand Hudson River School landscape tradition. For more than 30 years, Rockman developed his career as a painter, traveling the world and immersing himself in the ecology of a region by collaborating with scientists and field researchers. These experiences become the inspiration for his field drawings, which the artist likens to calligraphy, pictograms, or fossils.

Rockman’s concept of field drawings began during one of his many travels in the late 1980s and early 1990s with his close friend, the conceptual artist Mark Dion. On a six-week excursion to Guyana, with only paper at hand for art making, the artists pulled mud from the riverbank to use as drawing material. What began as a lark developed for Rockman into a long-standing exploration of creating art with organic materials. He has continued to develop work through this process of collaboration and interviews with scientists, research on ecology and biology, and collection of materials at sites such as an Amazon rainforest, a South African desert, the La Brea Tar Pits in Los Angeles, and the Fresh Kills Landfill on Staten Island, New York, as well as in Madagascar and Tasmania.

A 72-page fully illustrated color catalogue accompanies the exhibition, featuring the 93 images on view and an interview between Parrish Art Museum Director Terrie Sultan and Alexis Rockman. In keeping with the artist’s commitment to scientific research and field exploration as part of his process, the publication is designed in the style of the 1950s Golden Nature Guides, published by the Golden Books division of the former Western Publishing.

Artist-in-Residence: Field Drawings with Alexis Rockman
In addition to presenting the exhibition, the Parrish has selected Rockman, for his environmental passion and ecological studies conveyed through his art, as the Museum’s second Artist-in-Residence, a program that was launched last year with William and Steven Ladd. Beginning in fall 2015, Rockman will work with nearly 350 students from the Bridgehampton, Southampton, and Tuckahoe School Districts who will experience first-hand how an artist transforms ideas and insights into works of art. Participants will study Rockman’s large paintings, attend talks by the artist at their schools, gather their own organic materials, and work with Rockman at the Museum to create their own field drawings. The Residency will extend beyond visual art to incorporate biological and ecological studies, grounding the students in a deeper understanding of their environment.

About Alexis Rockman
Born in New York City in 1962, Alexis Rockman was exposed to natural history at an early age through his mother, who worked at the Museum of Natural History. His interest in film and animation led him to studies at the Rhode Island School of Design, and the School of Visual Arts in Manhattan, receiving a BFA in fine arts. Rockman’s paintings in the 1990s were inspired by imagined environmental catastrophes, as well as science-fiction films including Stanley Kubrick’s 2001: A Space Odyssey and Ridley Scott’s Alien.

Those interests, combined with a fascination with the consequences of genetic engineering and climate change, led to his magnum opus, the monumental mural Manifest Destiny (2004). This futuristic depiction of Brooklyn, New York, combines the artist’s practices of extensive scientific research and flights of psychedelic fancy. Subsequent work focused on the sturm und drang of weather and its effects on the environment. Calving Glacier (2005) shows mammoth ice chunks hurling down into a sea, dwarfing a small red boat in the foreground. Jamaica (2007) depicts wrecked houses folded like paper after sliding down a muddy cliff side.

The first survey of the artist’s paintings and works on paper, Alexis Rockman: A Fable for Tomorrow, was presented in 2010-2011 at the Smithsonian American Art Museum. Also in 2011, Rockman was selected by filmmaker Ang Lee to create conceptual sketches and designed a sequence for the Academy Award winning film, Life of Pi.

Alexis Rockman has had solo exhibitions throughout the United States and Europe beginning in 1985. His work is in the public collections of numerous museums including Solomon R. Guggenheim Museum and the Whitney Museum of American Art, New York Hammer Museum in Los Angeles; Museum of Fine Arts, Boston; San Francisco Museum of Modern Art; as well as The Israel Museum, Jerusalem; Moscow Museum of Contemporary Art, Russia; and the Wurth Museum, Germany.

About the Parrish Art Museum
Inspired by the natural setting an artistic life of Long Island’s East End, the Parrish Art Museum illuminates the creative process and how art and artists transform our experiences and understanding of the world and how we live in it. The Museum fosters connections among individuals, art, and artists through care and interpretation of the collection, presentation of exhibitions, publications, educational initiatives, programs, and artists-in-residence. The Parrish is a center for cultural engagement, an inspiration and destination for the region, the nation, and the world.