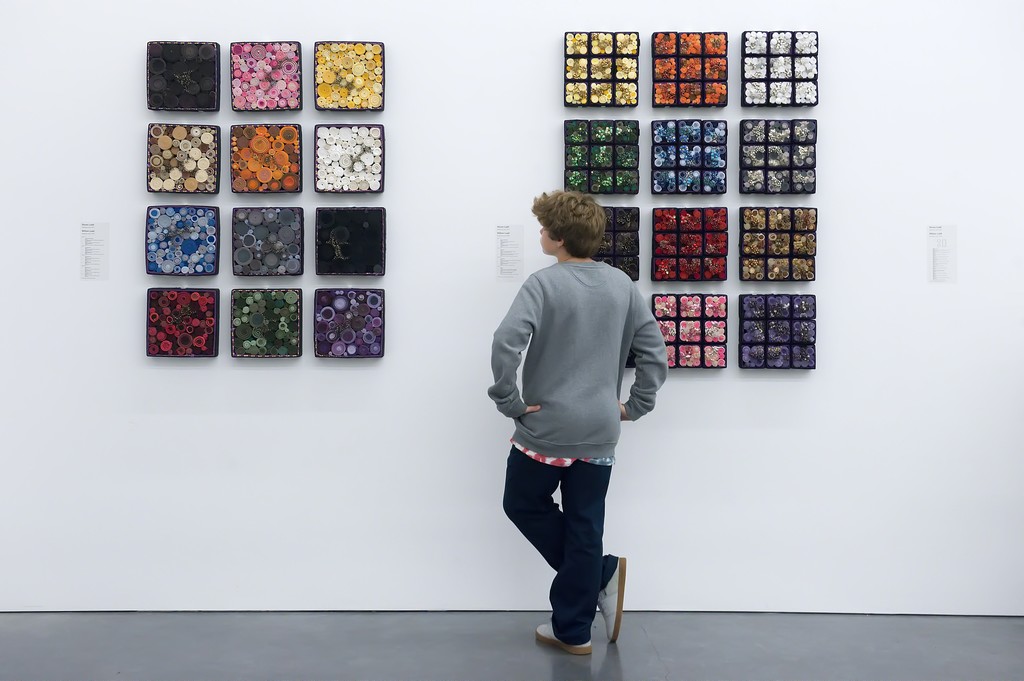 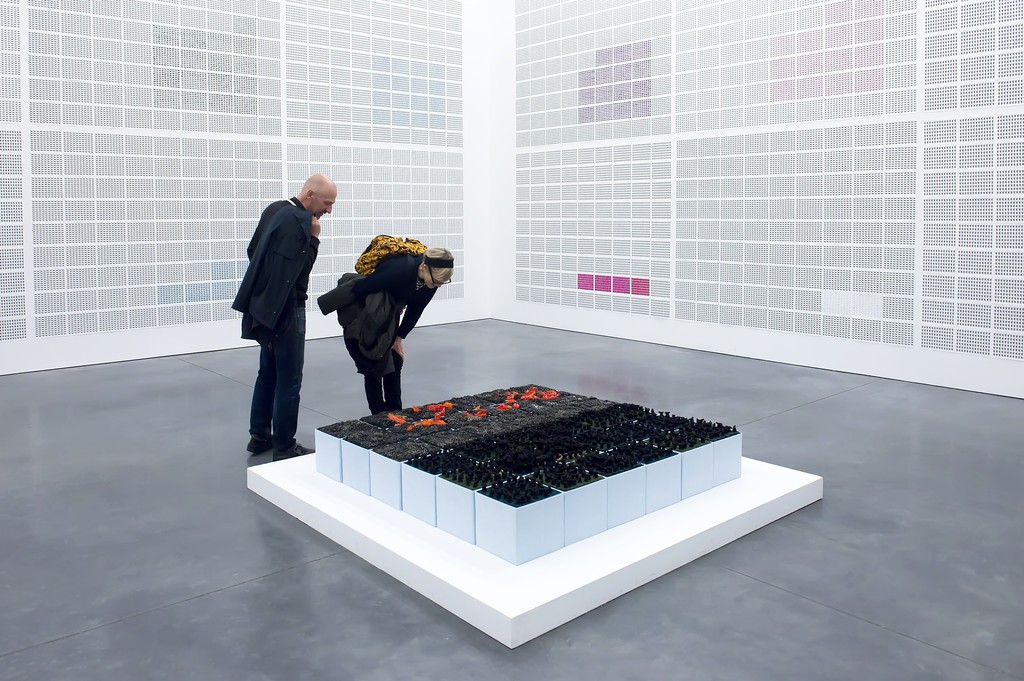 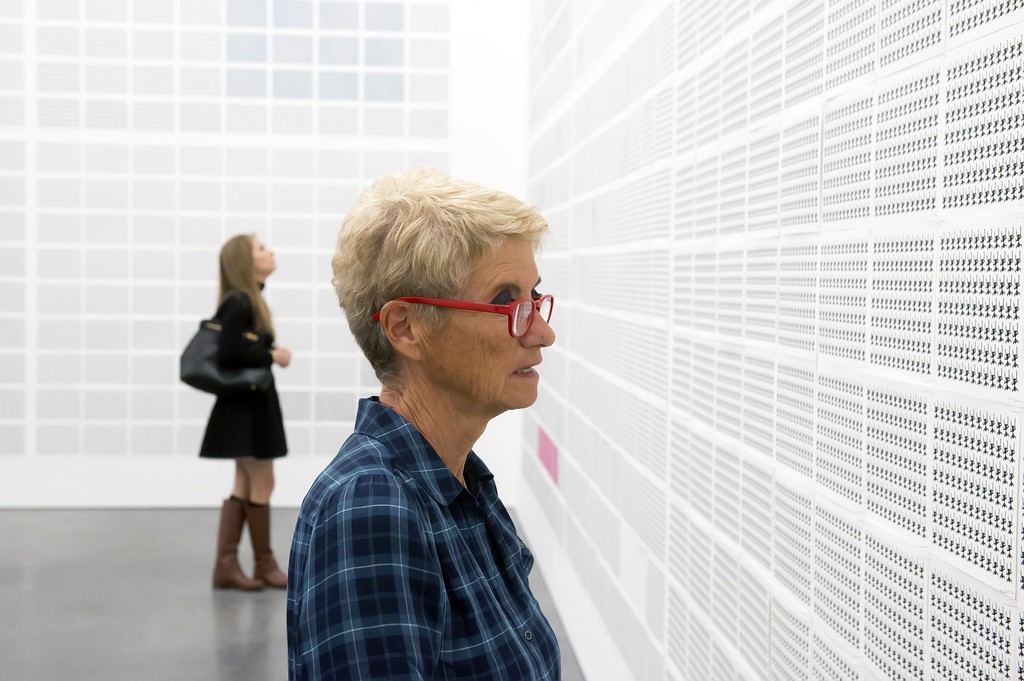 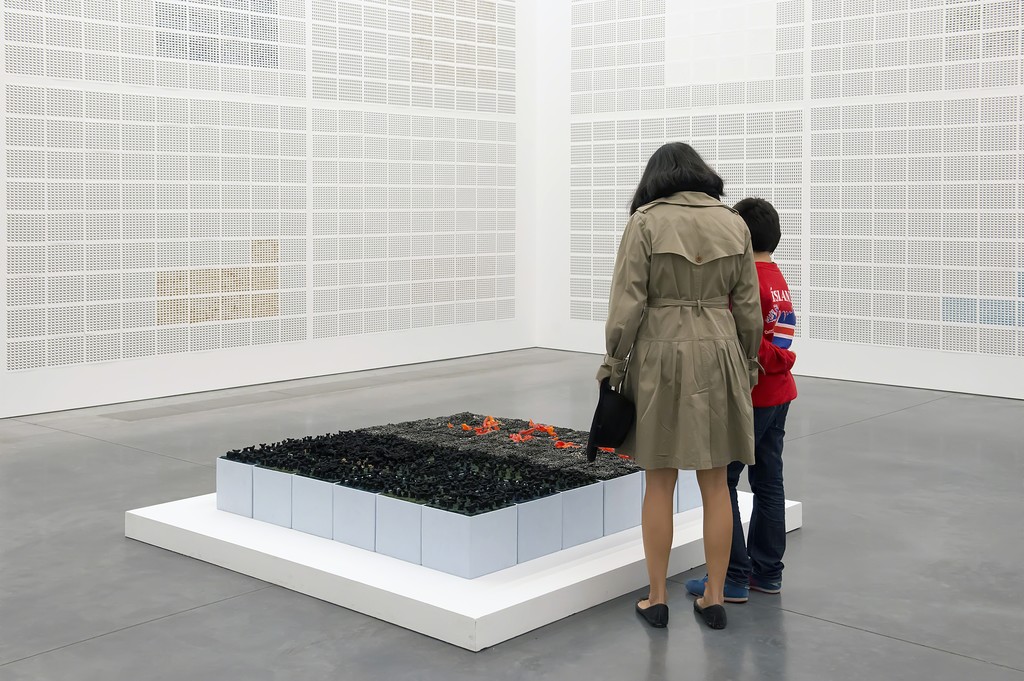 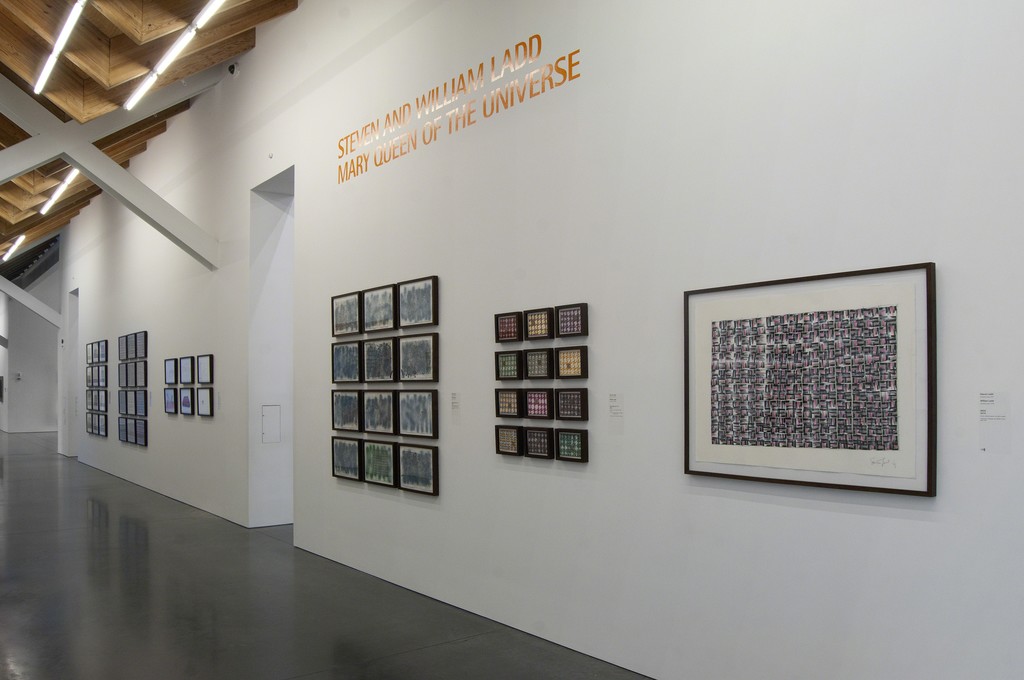 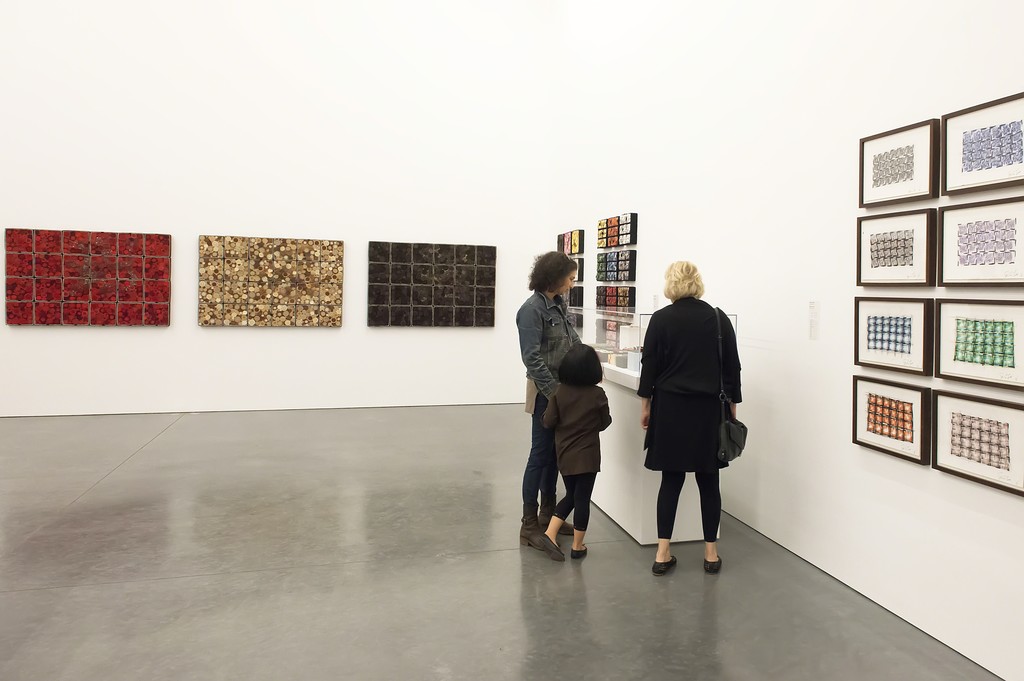 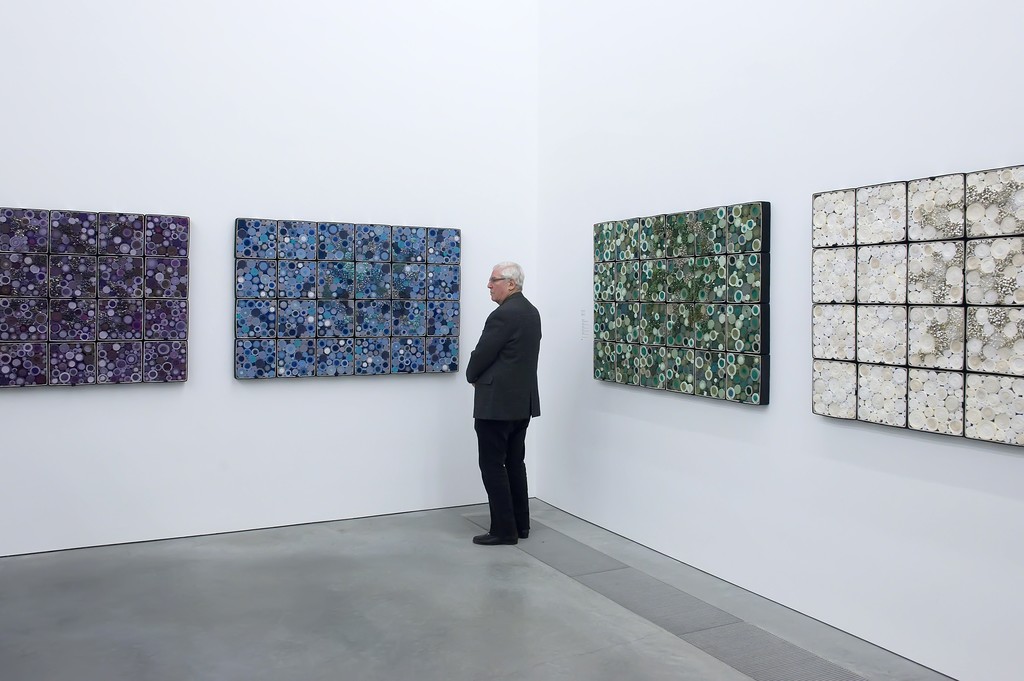 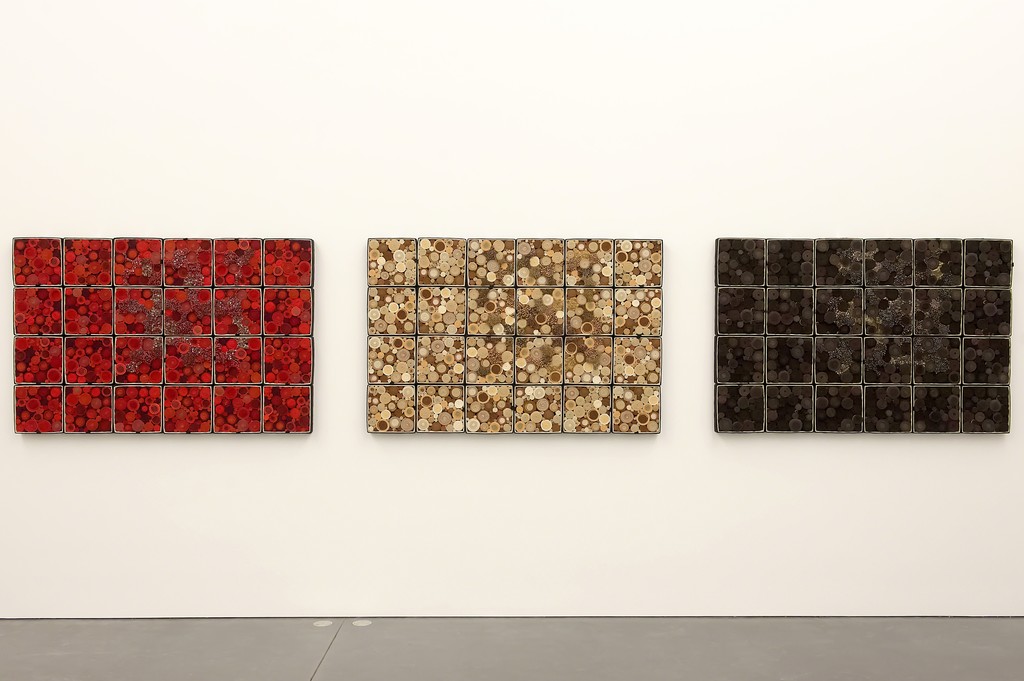 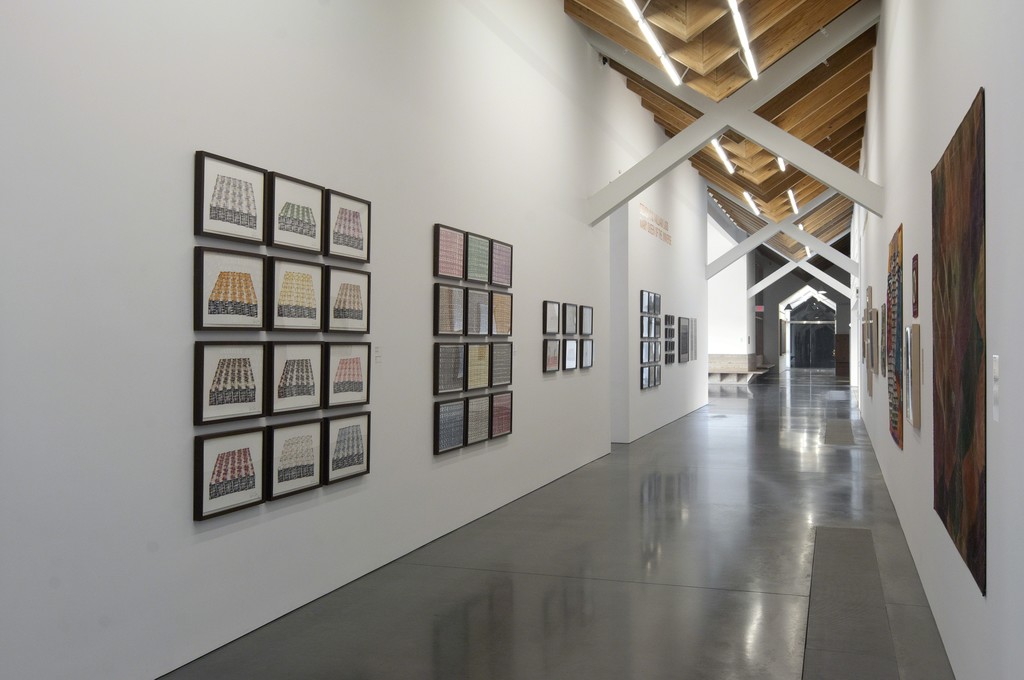 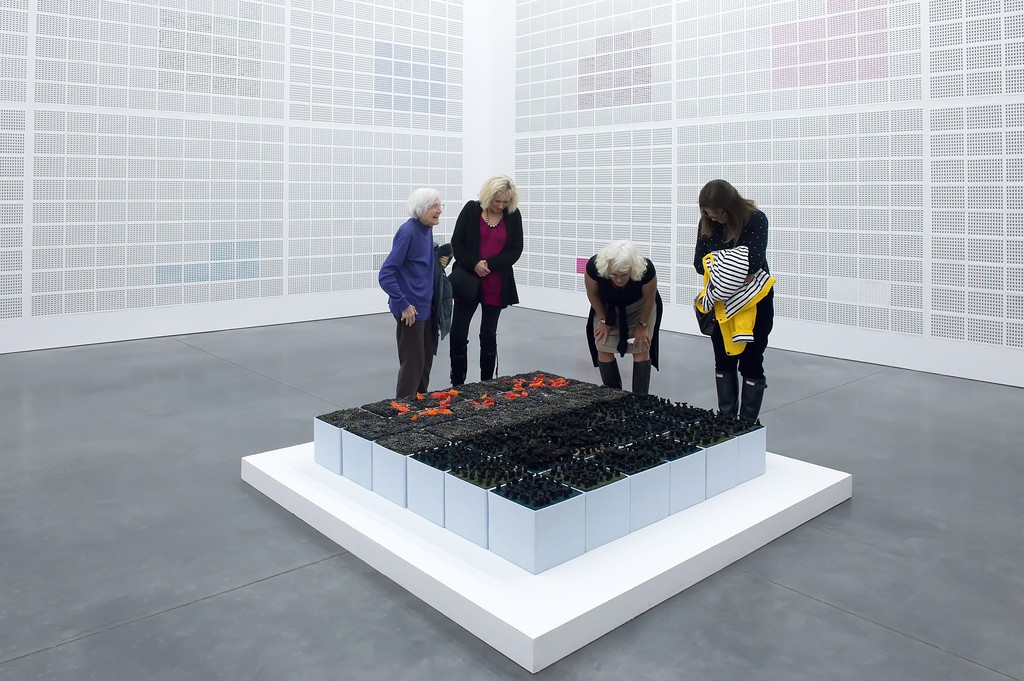 WATER MILL, NY 9/3/2014—From October 26, 2014 through January 19, 2015, the Parrish Art Museum will present Steven and William Ladd: Mary Queen of the Universe—an exhibition of meticulously crafted sculpture, drawings, and prints by the fraternal collaborative team who, for ten years, have explored the blurred boundaries between design and fashion, fine art and craft. Using non-traditional materials like fabric, belts, beads, and paper, the Ladds create portraits of memories— rich visual abstractions based on their shared childhood experiences growing up in St. Louis and attending the small Catholic grade school, Mary Queen of the Universe, after which the exhibition was named.

“Presenting Steven and William Ladd’s exhibition simultaneously with Alan Shields: In Motion—another exhibition at the Museum on view concurrently—will be a compelling experience for visitors,” said Parrish Art Museum Director Terrie Sultan. “There are many points of intersection between these artists, though they each come to their creativity from different points of view. The Ladd brothers and Shields each used materials that are non-traditional in the greater sense of our expectations of fine art, such as beads and textiles. Each artist’s work also has a performative aspect, founded in dance and motion, and a desire to connect various disciplines within the overall context of their work.”

The exhibition at the Parrish features 24 sculptures including maquettes and towers made up of individual boxes, a series of 10 handcrafted artists books, and more than 25 drawings and prints. The central core of the exhibition is a series of 12 large sculptures, each consisting of 24 handmade boxes, installed on the walls in their own individual grids. These “landscapes” reveal densely packed, complex visual information couched in the language of beauty and obsession.

Color and title provide additional insight into the work. According to Steven Ladd, “Each color triggers a story.” The stories are of typical, everyday childhood experiences that have universal resonance, made compelling through the creative dexterity of the artists’ hands.

The most elaborate work in the show, and in the Ladds’ oeuvre to date, is Faith (2014), a dark sculpture with elements that refer to a mysterious creek, dense trees in verdant hills, an infestation of ants, and flames—a reference to Christian symbolism.

Steven and William Ladd: Mary Queen of the Universe embraces strong theatrical elements. Viewers experience the exhibition in a linear fashion, unfolding in time and space. The Ladds have presented their works in ritualistic performance, opening the boxes and laying them on the floor to reveal the elements within, and they will repeat that performance at the preview reception at the Museum on October 25.

New Artist-in-Residency Program
The importance of interactivity drives another aspect of Steven and William Ladd’s work: collaboration. As part of a new Artist-in-Residence initiative at the Parrish, they will lead more than 1,000 area students in a four-week art program that connects concepts such as the use of recycled and repurposed materials, creative collaboration, and storytelling through art. This work will culminate in a community “Scrollathon,” a term coined by the brothers for their unique social project for families on November 9 at the Museum.

“Through far-reaching art programs and the residency, the Ladds are establishing an on-going relationship with the community,” said Parrish Director of Education Cara Conklin-Wingfield. “While this continues the tradition of artists as active participants on the East End, at the same time it represents the creation of a new contemporary legacy between these artists and the community.”

About Steven and William Ladd
Steven and William Ladd were born in St. Louis, Missouri, in 1977 and 1978, respectively, and raised in a Catholic household. They began their careers in jewelry and handbag design and production. The brothers had their first solo museum exhibition at The Contemporary Museum, Honolulu, in 2011. Using a 2010 grant from The Andy Warhol Foundation for the Visual Arts, they were given the entire 5,000-square-foot museum to showcase new works featuring Ant Infestation—a large tower that opens to reveal a beautiful landscape of hand-beaded trees with an infestation of 600 small cast ants. Following that critically acclaimed show, the Ladds began working on a new series entitled Shaboygen that focused on their shared high school memories and was presented at the Essl Museum of Contemporary Art, Klosterneuburg, Austria, in 2012.

Exhibition Catalogue
Steven and William Ladd: Mary Queen of the Universe will be accompanied by a fully illustrated 106- page catalogue, with essays by Parrish Art Museum Director Terrie Sultan and Lowery Stokes Sims, Curator at the Museum of Arts and Design, and contributions by Steven and William Ladd.

Sponsorship
Steven and William Ladd: Mary Queen of the Universe is made possible, in part, by the generous support of the Joseph and Sylvia Slifka Foundation and the May and Samuel Rudin Family Foundation. The publication is made possible by the generous support of The Mr. and Mrs. Raymond J. Horowitz Fund for Publications and William H. Wright II. Support for the Scrollathon and Artist Residency Project is provided by the National Endowment for the Arts, the New York State Council on the Arts with the support of Governor Andrew Cuomo and the New York State Legislature, The DeWitt Wallace Fund for Youth at the Long Island Community Foundation, and the Henry Buhl
Foundation.