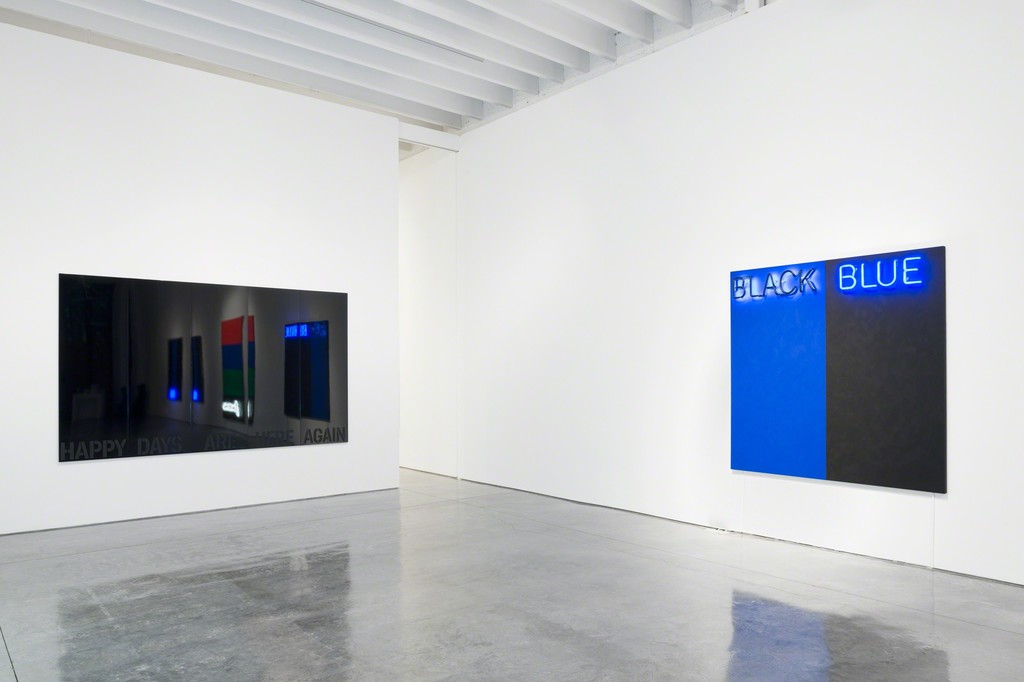 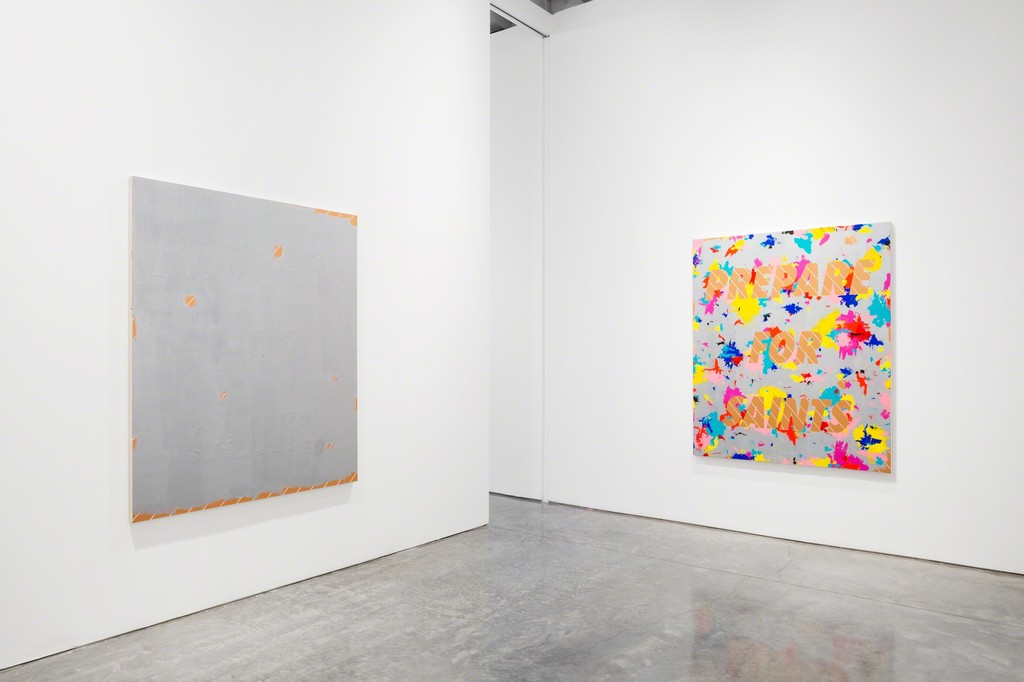 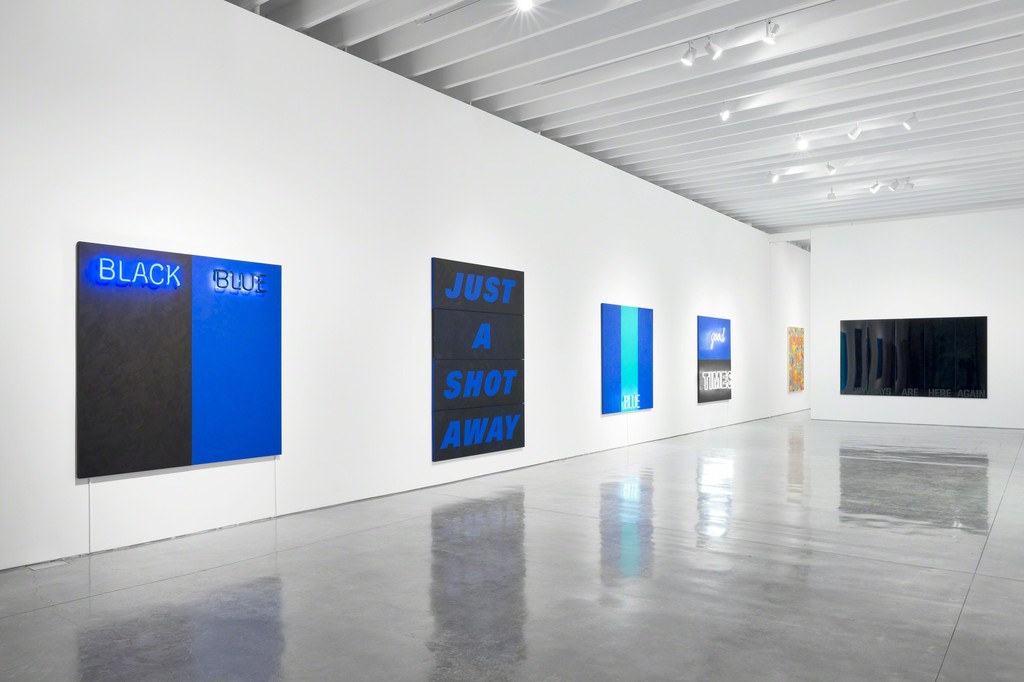 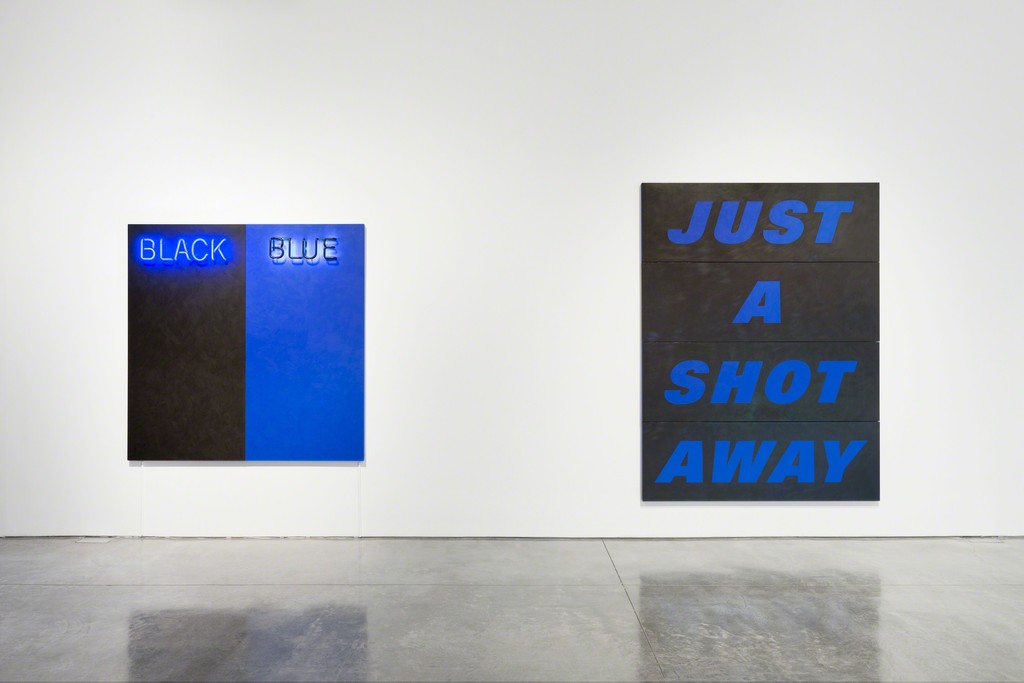 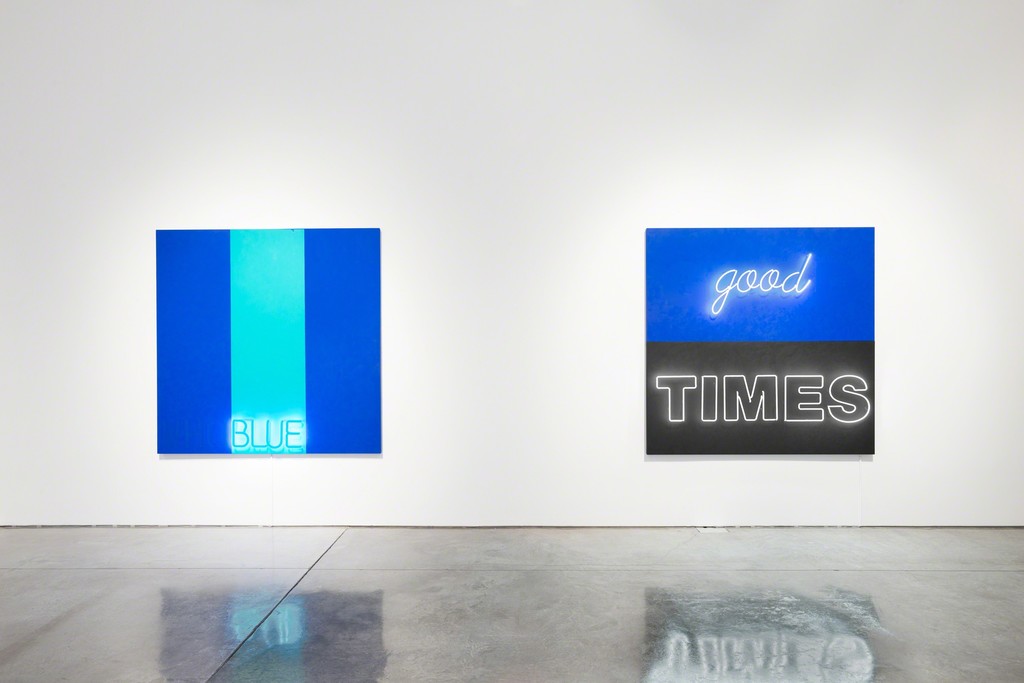 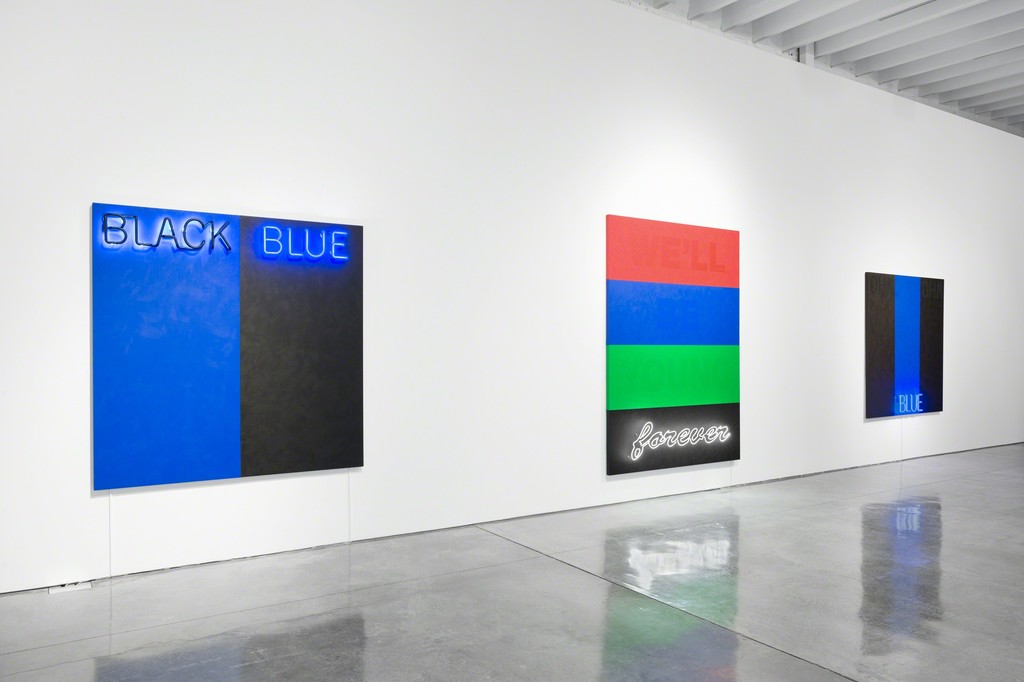 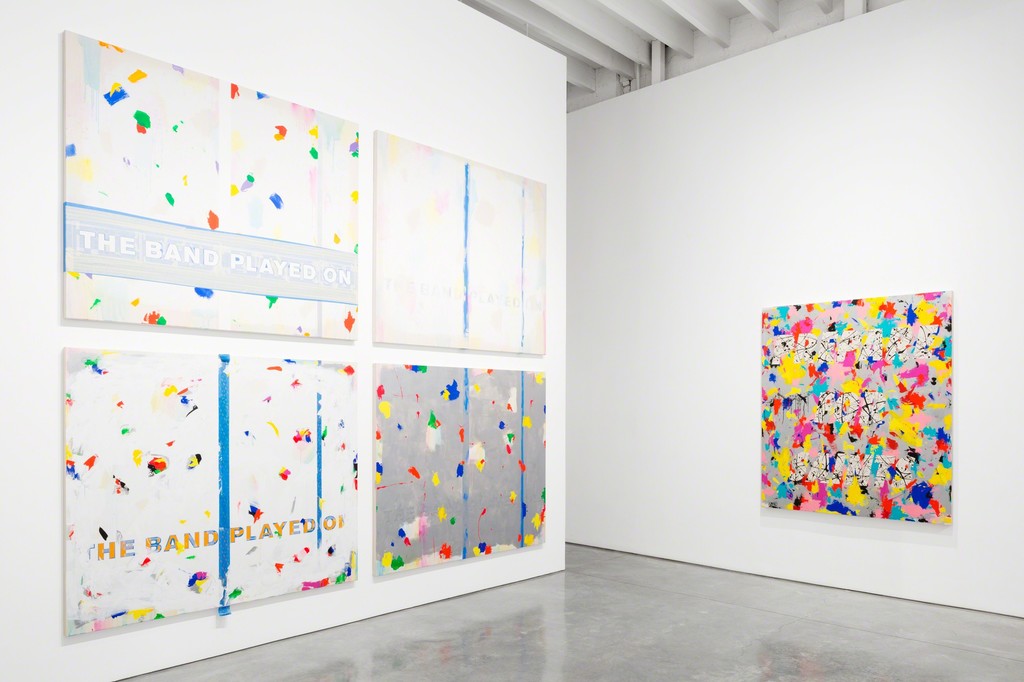 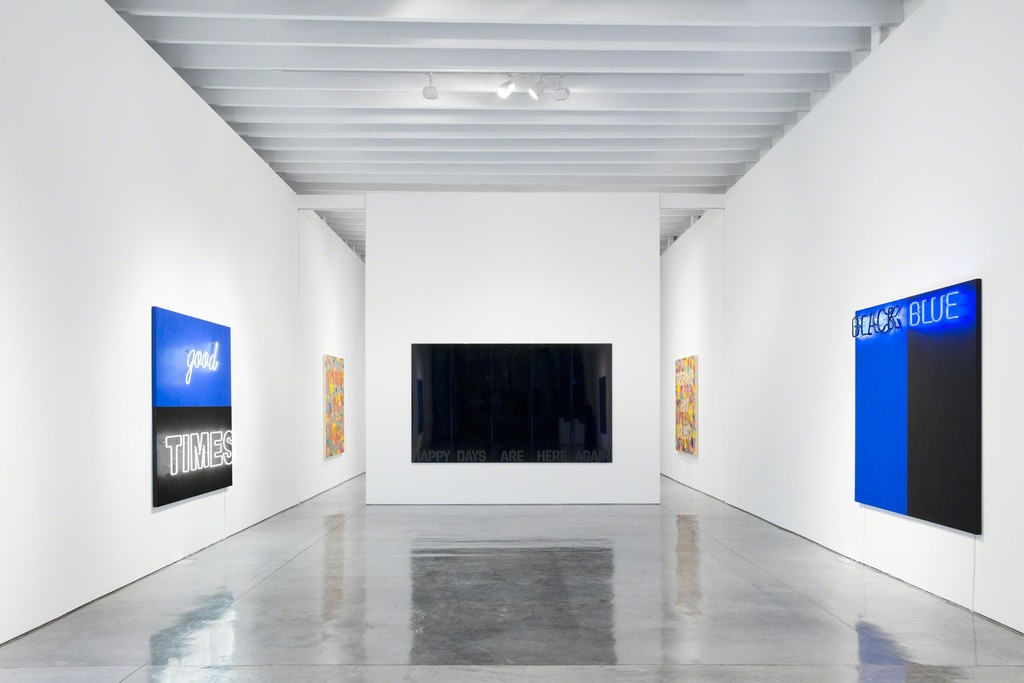 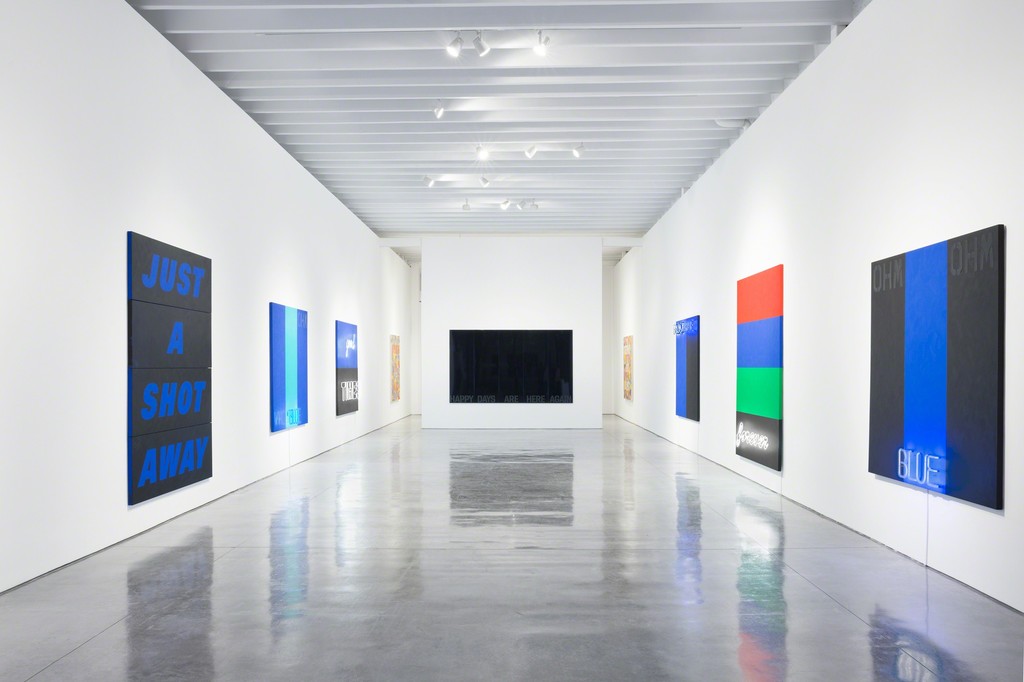 Paul Kasmin Gallery is pleased to announce Deborah Kass: No Kidding, an exhibition of new mixed media paintings on view at 515 West 27th Street from December 9, 2015 – January 23, 2016. Mounted on fields of primarily black and blue, Kass incorporates neon lights in her paintings for the first time, limiting her signature palette, to spell out puns and phrases bearing pop cultural references that provide a somber meditation on the troubling present, and uncertain future.

No Kidding represents the artist’s fourth body of work lying at the intersection of popular culture, contemporary art, art history, and politics. Like all of Kass’s most important series of the past 25 years, her work consistently and articulately deconstructs the unspoken politics of modernism and reinvents it with urgent and contemporary political meaning. An extension of her feel good paintings for feel bad times, Kass’ most recent body of work sets a darker, tougher tone as she reflects on contemporary issues such as global warming, institutional racism, police brutality, gun violence, and attacks on women’s health, through the lens of minimalism and grief.

Kass’ paintings often borrow their titles and puns from songs, such as, Just A Shot Away, 2014, which takes its name from the Rolling Stones’ 1969 song - “Gimme Shelter,” that was written in response to the violence of that time. Consistently laden with ambiguity, this work, along with others in the series, references a range of current social, political, and environmental tipping points.

Happy Days, 2014, a multi panel, black-colored painting, references the campaign song for Franklin D. Roosevelt’s successful 1932 Presidential campaign. The song was re-recorded thirty years later by Barbra Streisand–historically one of Kass’ muses– giving it a new context for contemporary generations. Kass provides yet another reading commenting on the fate of the New Deal and America’s relationship to happiness and hope. As the viewer sees their reflection in the mirror-like surface, they are reminded of their responsibility for the present state of affairs.

In a separate room, Kass’ paintings The Band Played On, 2014 and Prepare for Saints, 2014 provide the coda for the show. In the spirit of Jasper Johns and Robert Rauschenberg, they are made with non- traditional materials, and collectively with all the paintings in the exhibit, look at the present and the future with striking ambivalence.
 Concurrently, Kass’ first large-scale public sculpture OY/YO is installed at Brooklyn Bridge Park through August 16, 2016. Commissioned by Two Trees Management Company and presented in partnership with Brooklyn Bridge Park, the yellow painted aluminum sculpture is set alongside the iconic bridges of Brooklyn’s waterfront visible to viewers from Manhattan. OY/YO has been a significant and reoccurring motif in Kass’ work since its first appearance in 2011, taking form in paintings, prints, accessories and tabletop sculptures.