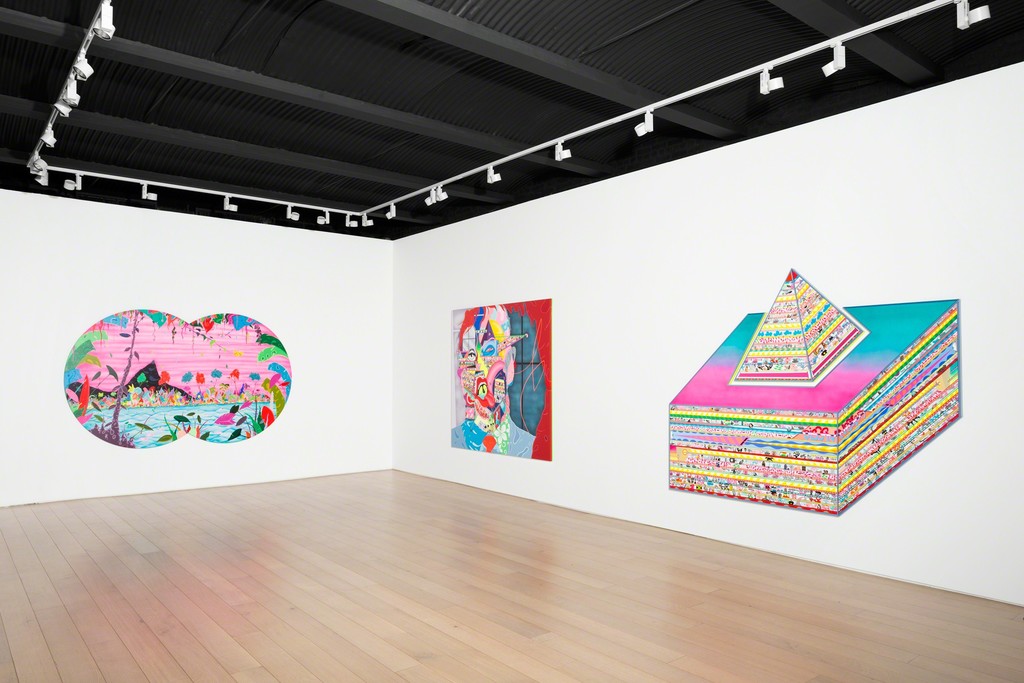 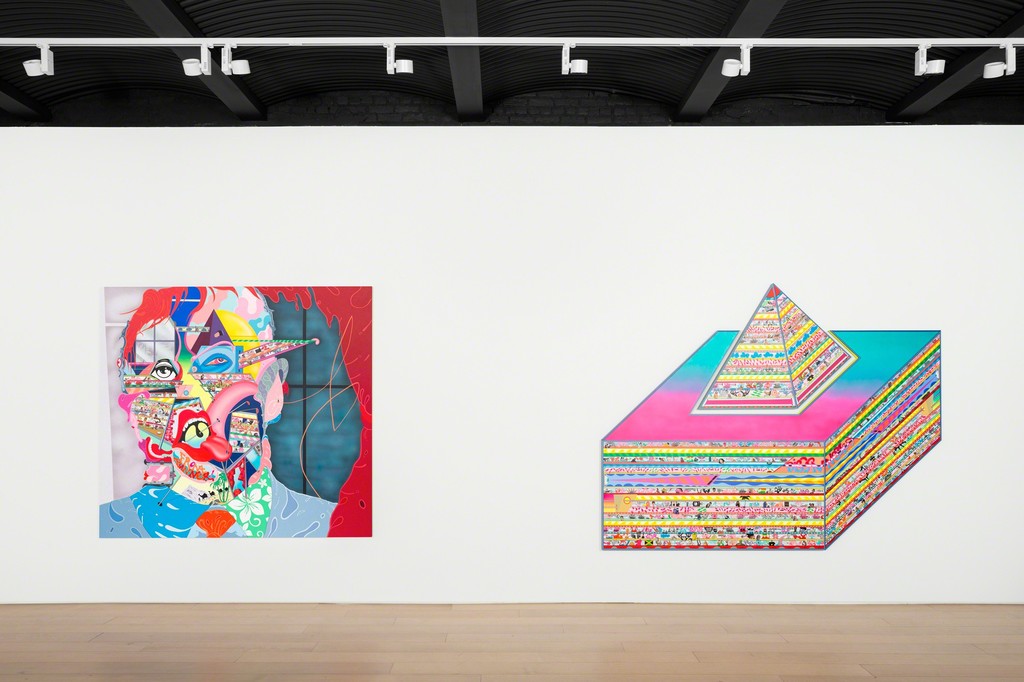 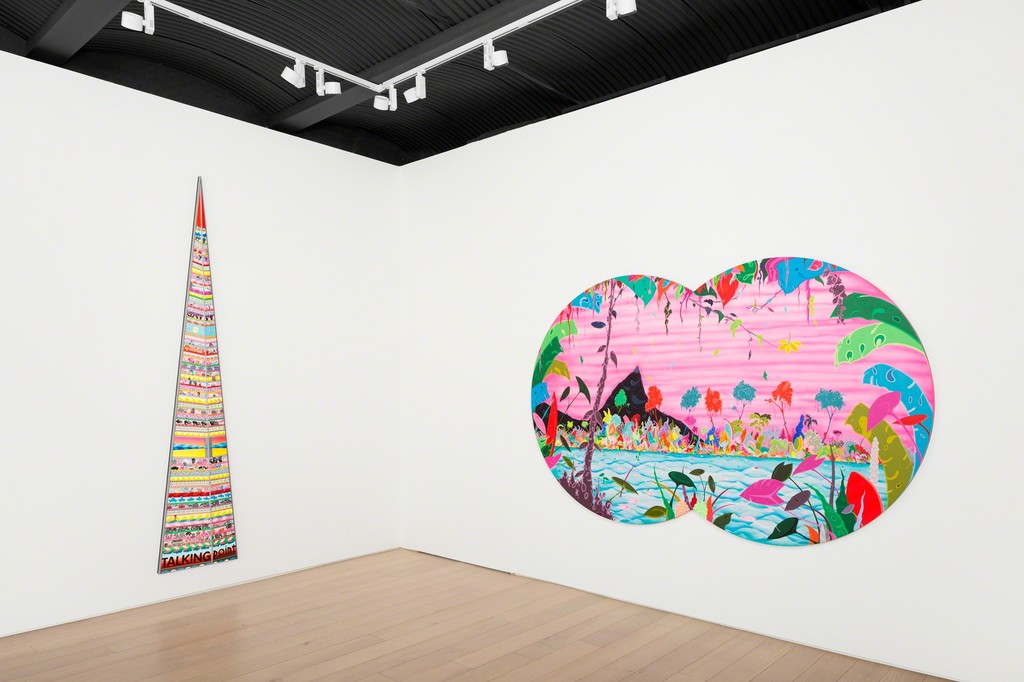 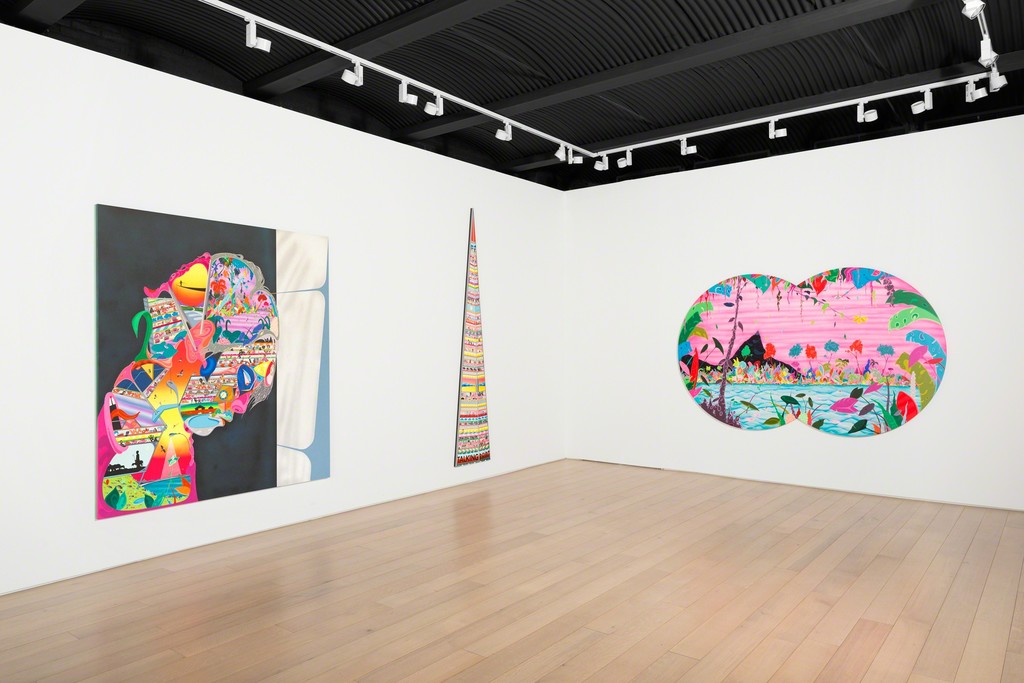 Paul Kasmin Gallery is pleased to present Erik Parker: Undertow, an exhibition of new paintings on view at 297 Tenth Avenue from December 9, 2015 – January 23, 2016. The works on view represent a confluence of ideas and styles explored in previous bodies of work including the Maps, Heads, Landscapes and Hydroglyphics His iconic, highly-saturated palette and intricate compositions are amplified by collage and airbrush techniques that create a balance of density and open space.

U n d e r t o w marks the artist’s third solo-exhibition with the gallery and offers insight into the evolution of Parker’s work over the last two decades. Here, Parker continues to critically chart the world’s current political, social, and economic landscapes with compositions brimming with references to media, popular culture, music, and art history. Synthesizing multiple elements from his myriad styles into new dynamic compositions, the artist works at breaking down the metanarratives of late modernist painting while simultaneously digesting the pictorial chatter of scrolling feeds of social media.

Highlighted in the exhibition are Parker’s new shaped canvases with which he develops the narrative possibilities of form. In Offshore, 2015 the support structure of the canvas takes the shape of binocular lenses, framing the action as if seen from afar. Parker’s large-scale, two-part shaped canvas titled Disconnected, 2015, features a pyramid representing the global elite. It is physically separated from the second canvas – literally leaving the rest of the picture, or perhaps, society behind.

Erik Parker (b. 1968, Stuttgart, Germany) studied at the University of Texas at Austin and SUNY Purchase, New York. Parker has had solo exhibitions at the Aldrich Contemporary Art Museum, the Modern Museum of Art Fort Worth, Honor Fraser, Galleri Faurschou, and Galeria Javier Lopez. Parker lives and works in New York. As such, his work was included in the inaugural “Greater New York” show at MoMA P.S. 1 in 2000. In Spring 2016, the artist will present a solo-exhibition of recent works at the Newcomb Art Museum in New Orleans, LA.