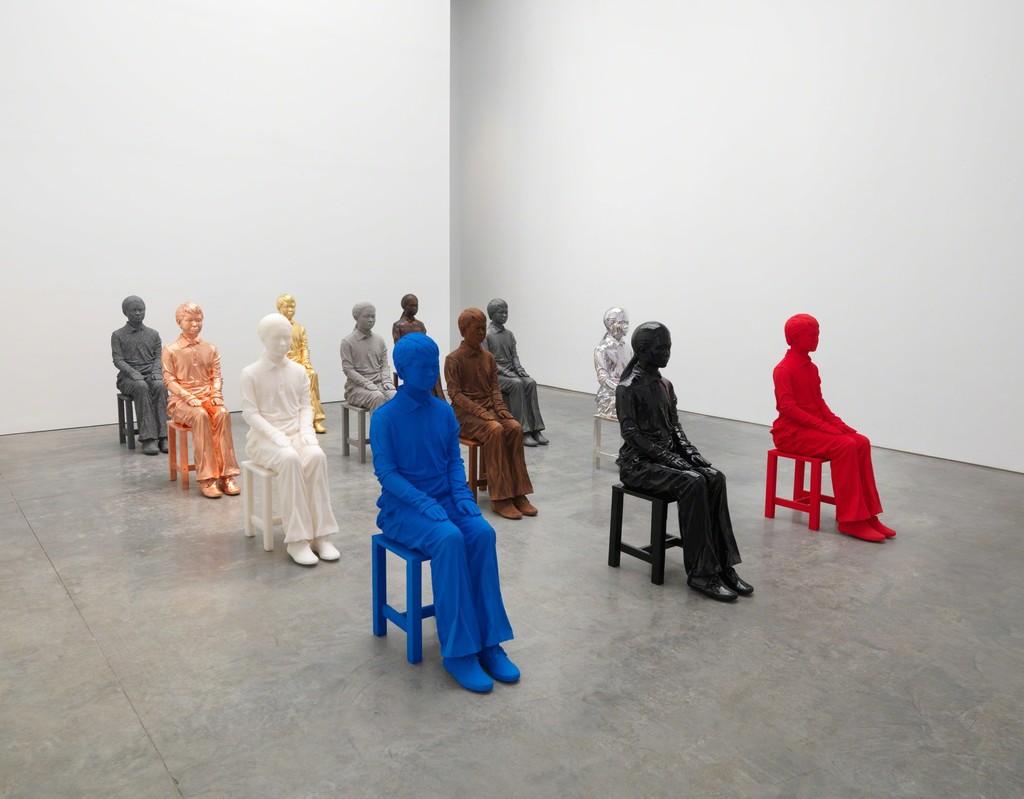 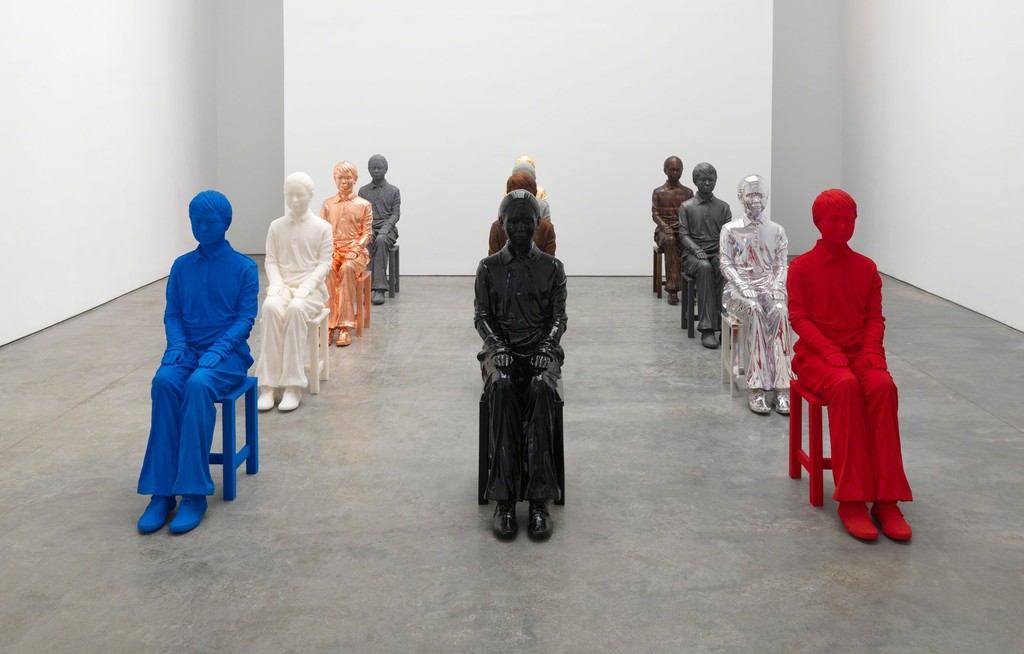 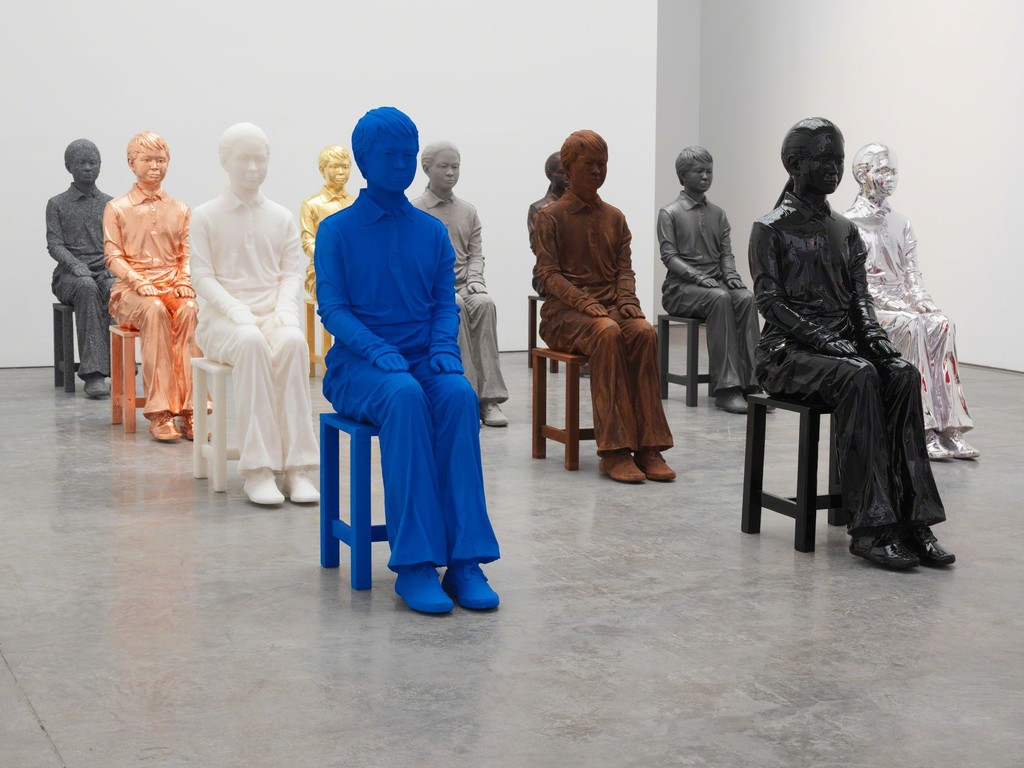 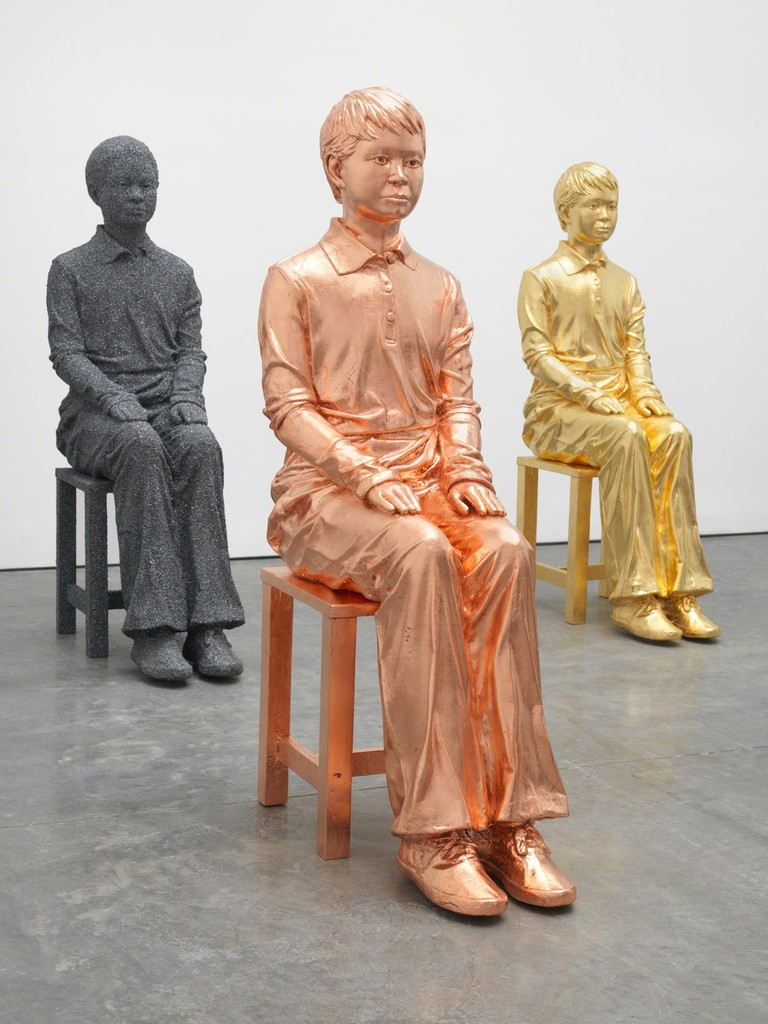 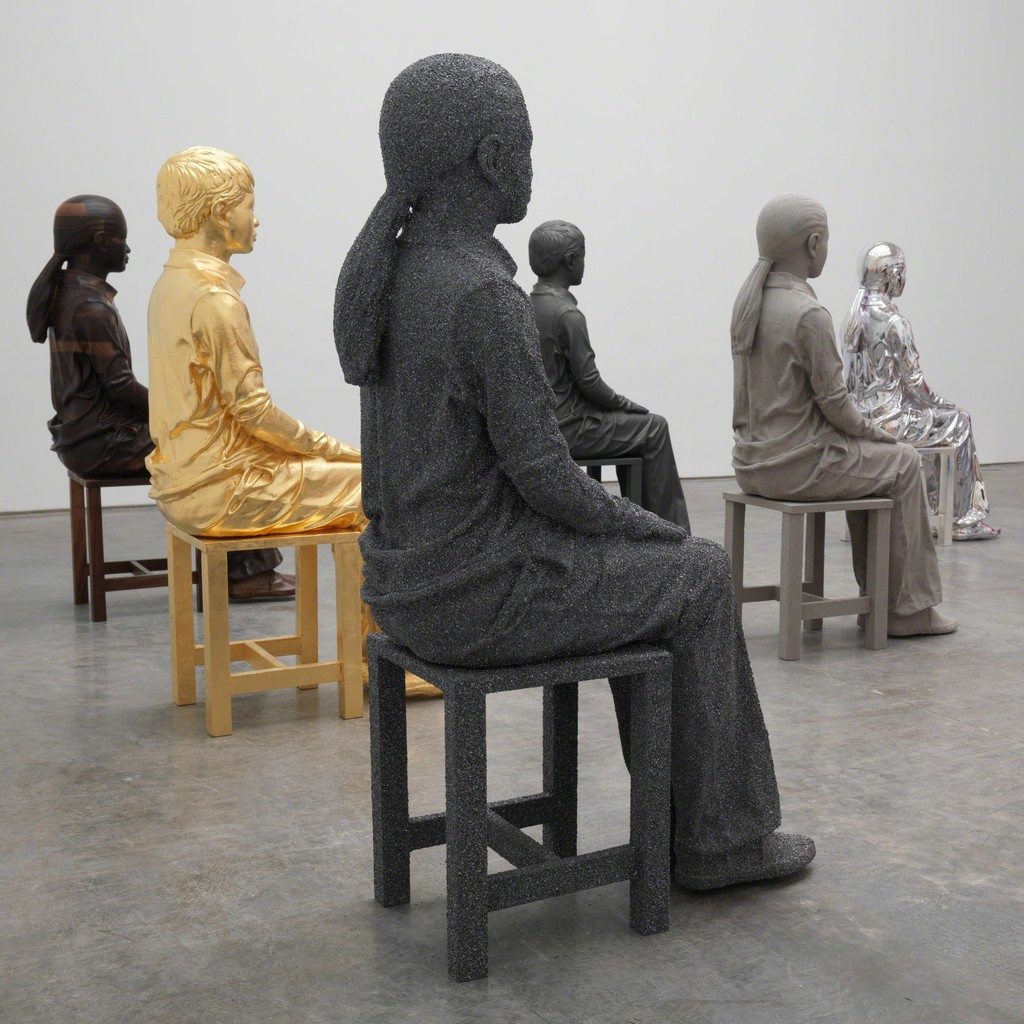 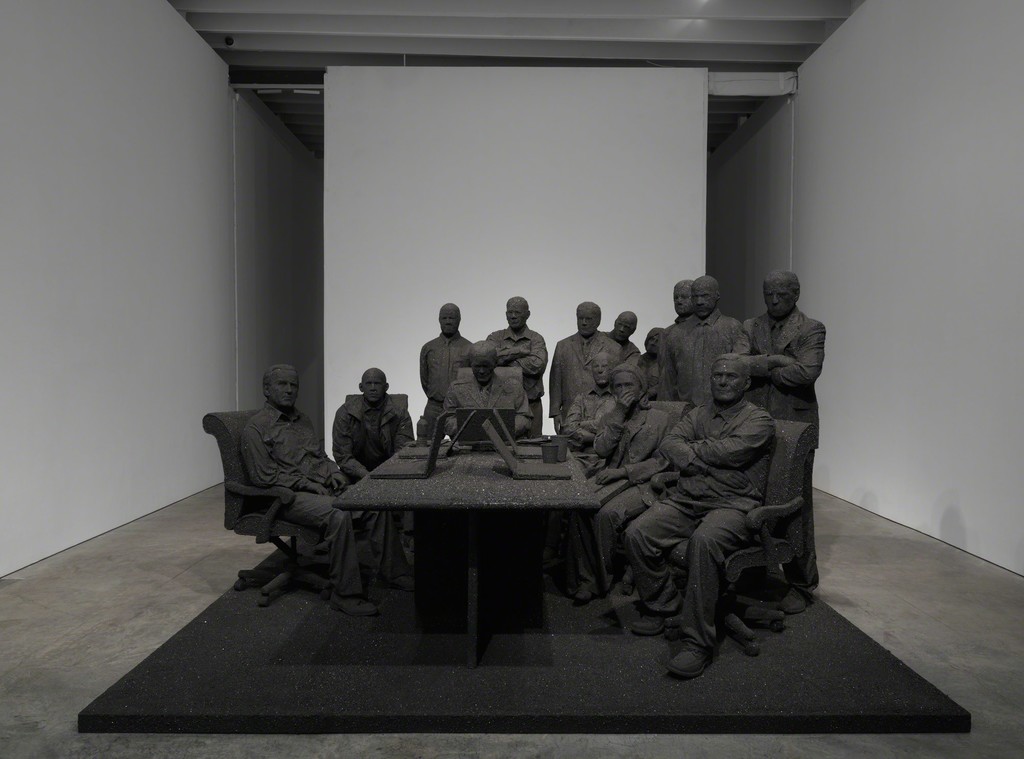 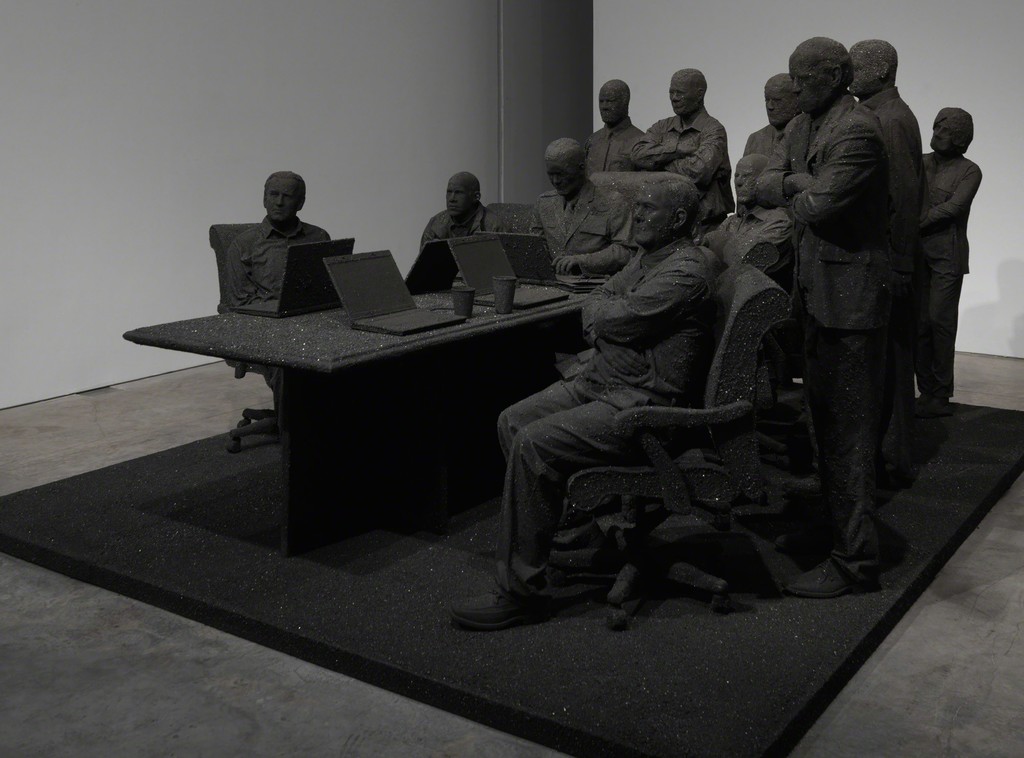 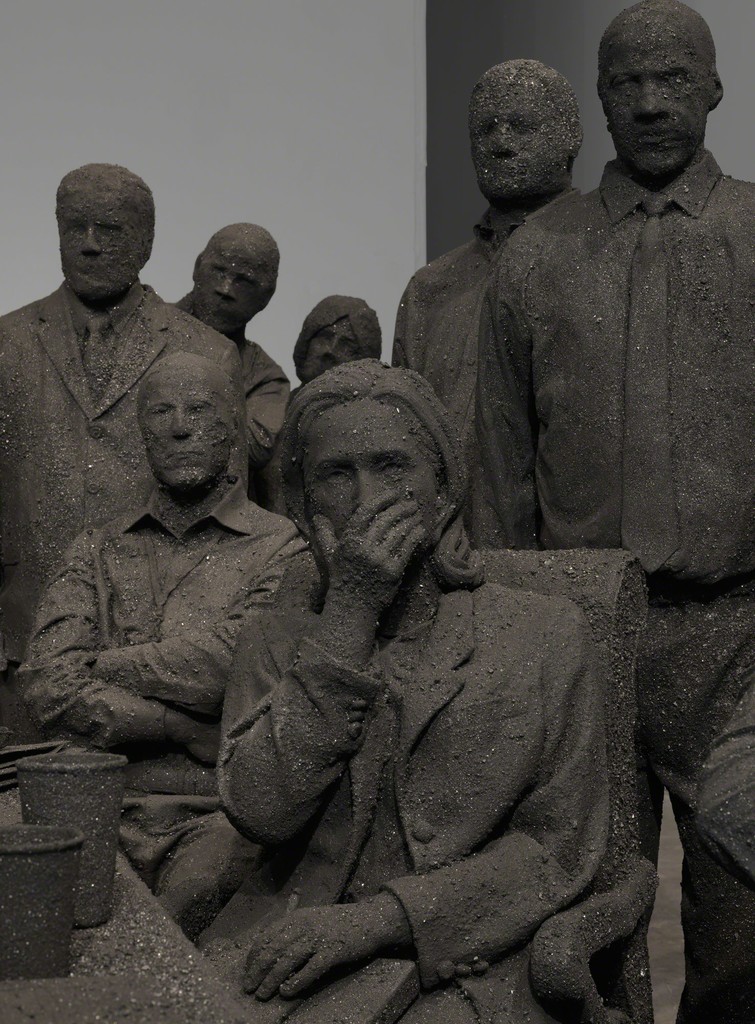 Paul Kasmin Gallery is pleased to announce Two Rooms, a solo exhibition of two new sculptural installations by Will Ryman, on view at 515 West 27th Street from September 10 – October 17, 2015. Ryman’s recent works, The Situation Room (2012–2014) and Classroom (2015) are explorations of global and historical complexities, a subject the artist first began to investigate with America (2013), a conceptual sculpture of Abraham Lincoln’s childhood cabin shown in February of 2013 at Paul Kasmin Gallery. An opening reception will be held at the gallery on September 10, 2015, from 6 – 8pm.

The Situation Room (2012–2014) is a life-size installation based on the iconic photograph that captured members of the Obama administration and U.S. military leaders watching in real time the Navy SEAL raid on Osama Bin Laden in Pakistan in 2011. Among those gathered in the White House Situation Room were President Barack Obama and Secretary of State Hillary Rodham Clinton. This millennia-old practice of leaders observing battle from behind the lines is made possible at a distance of more than 7,000 miles by twenty-first century technology.

Developed over the course of three years, the sculpture is composed of crushed black coal as a reference to industrial development and as a means to redact the specificity of the photograph, reducing the tableau to its elemental components. The Situation Room is a contemplation on war, power, propaganda, industrialization, and political theater. In its reductive monumentality, the artist’s appropriation of the photograph becomes an anonymous fossilization of the timelessness of war.

According to the artist, “I removed the identity of many faces in that room because, for me, what’s interesting is the situation itself. It is one that has been repeating itself throughout history and will probably continue to repeat itself. The key administration remains recognizable because they are the brand that is specific to this event and time period, however the work challenges the emotion and nationalism that the photograph was intended to provoke by focusing on the forms of the other figures rather than identity.” The Situation Room takes on additional meaning as a provocative commentary on power with the recent article that questions the Obama administrations narrative of the raid.

Classroom presents 12 figures from the same cast, each made of a different natural resource or composite essential to various cultures and economies including cadmium, titanium, salt, iron, oil, chrome, copper, wood, and gold. Arranged in four rows of three, the figures evoke traditional classroom settings, interchangeable workers in a factory’s assembly line, or soldiers in military formation. Their youthful appearance references the practice of child labor so widespread in many countries. Corporations in developed countries often refer to their employees as their greatest “natural resource,” and in one interpretation of the installation, Ryman extends the metaphor to an inexorable conclusion: workers are a material to be mined and exploited in the service of industry. They are, to the extent possible, mechanized.

Will Ryman (b.1969) lives and works in New York City. Ryman uses material to elevate and amplify meaning in his sculpture, painting, and installations. His most recent work gives physical shape to issues associated with industrialization, globalization, historical complexities, and political conundrums.

Recent exhibitions include America, at Paul Kasmin Gallery, New York (2013), Bird, in Flatiron Plaza, New York (2013); Anyone and No One at Paul Kasmin Gallery, New York (2012); Will Ryman: Desublimation of the Rose, at the Fairchild Tropical Botanic Garden, Coral Gables, Florida (2011 – 2012); 90th Anniversary Installation at the Phillips, at The Phillips Collection, Washington, D.C. (2011- 2012); and The Roses on Park Avenue, New York (2011). Individual works have been exhibited in PROSPECT3, New Orleans (2014-2015); the Sculpture Park at Frieze Art Fair, London; Frist Center for the Visual Arts, Nashville, TN; and at The National Academy of Design, New York, among others.