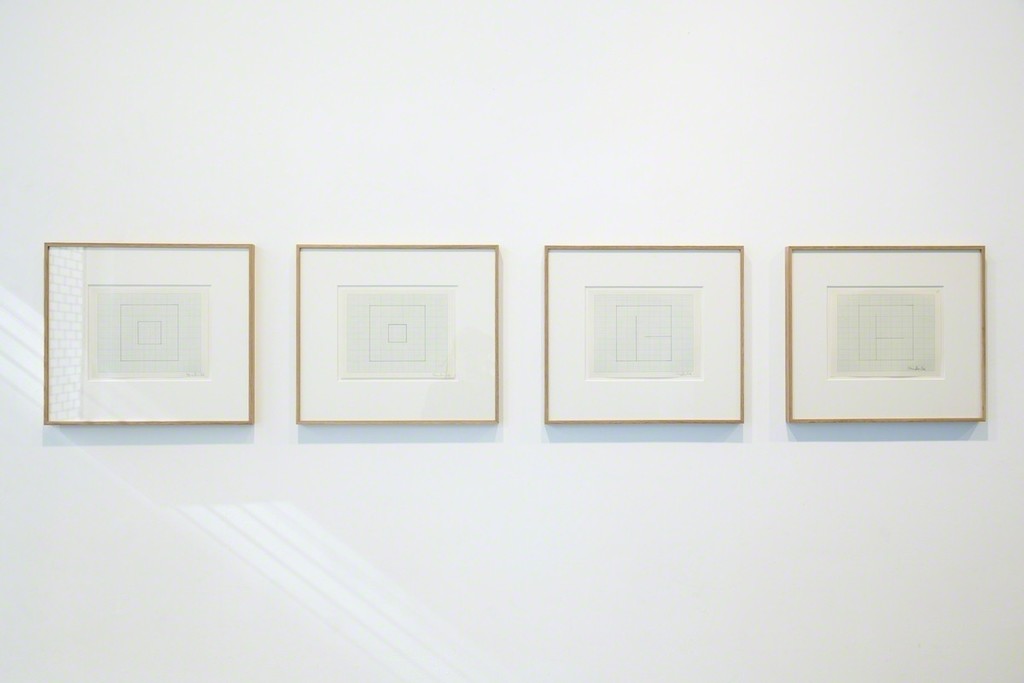 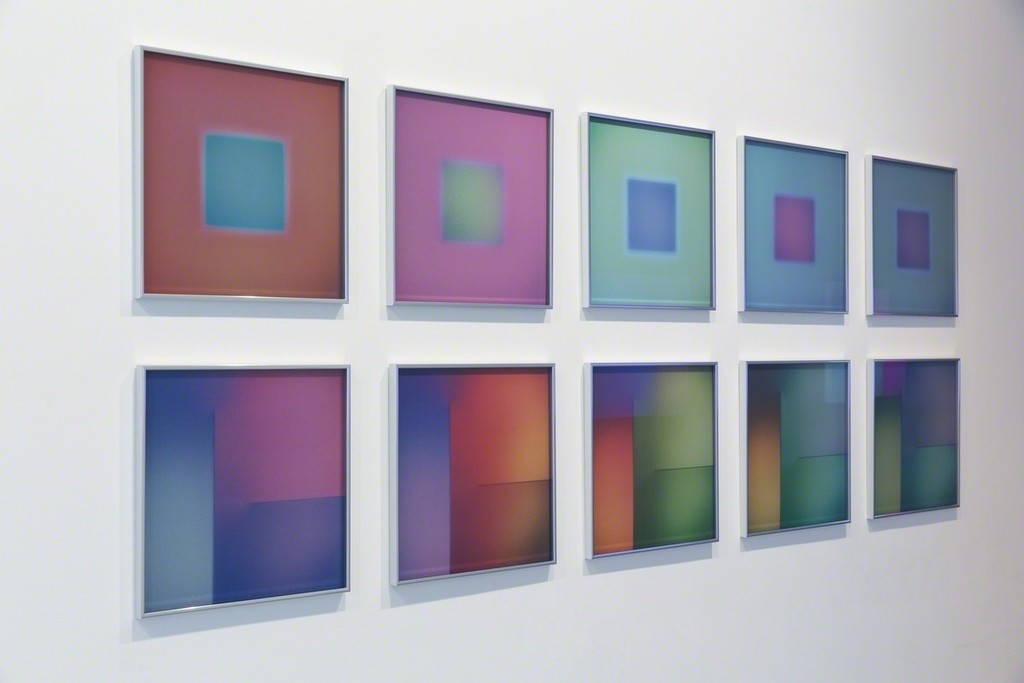 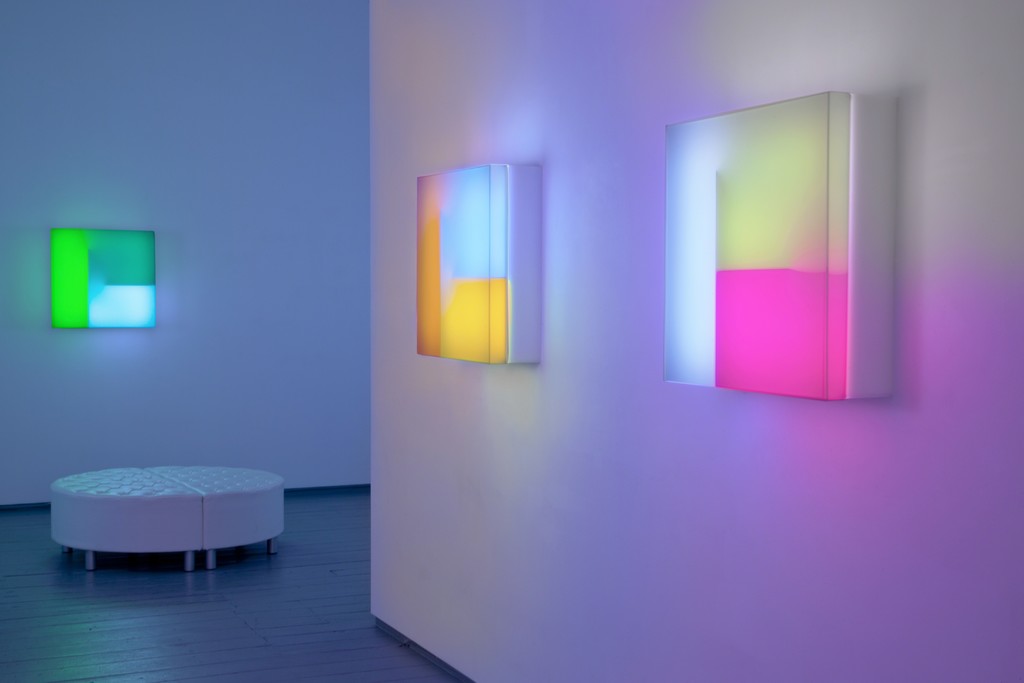 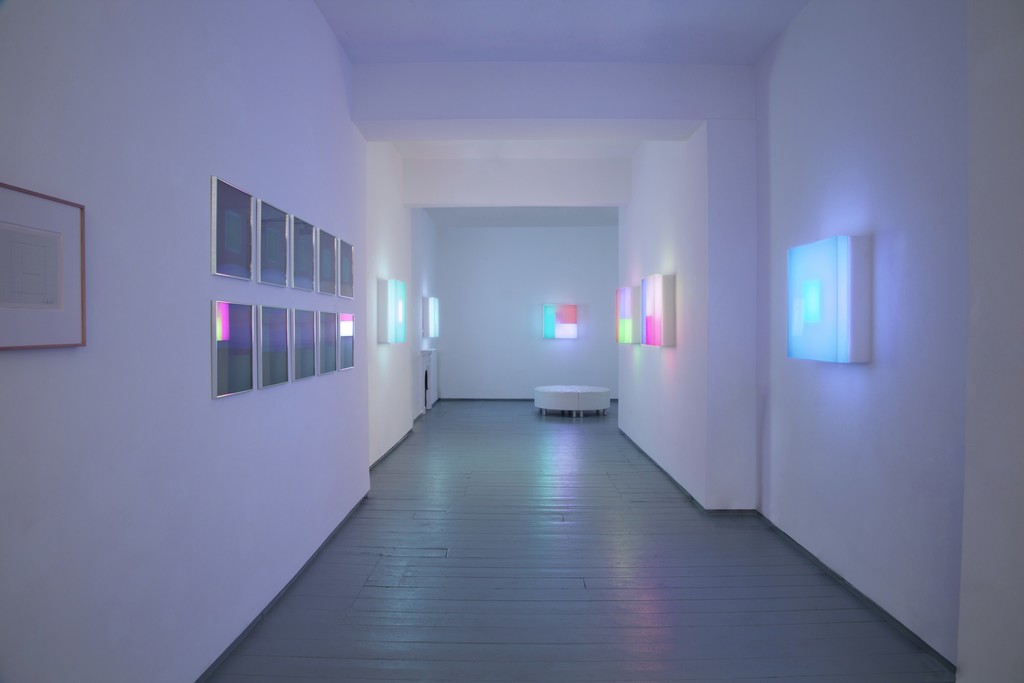 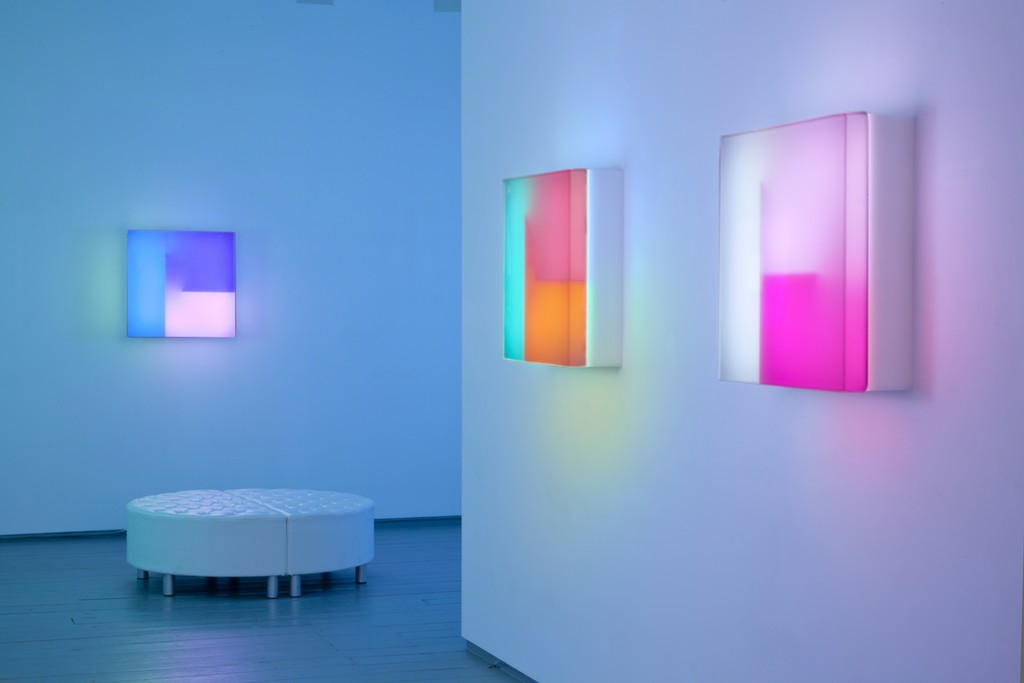 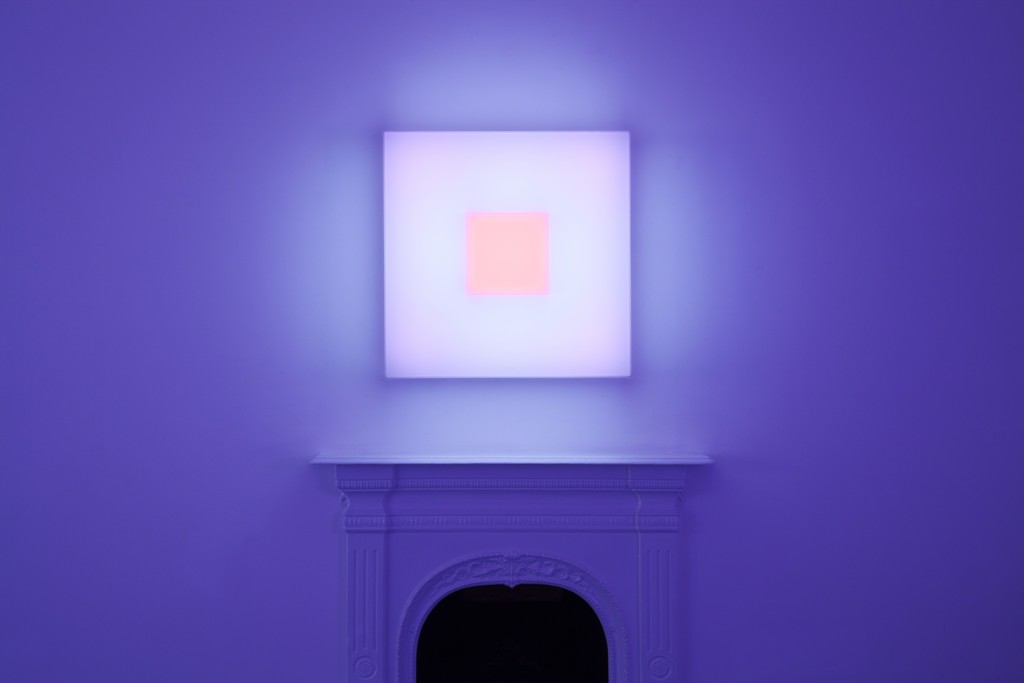 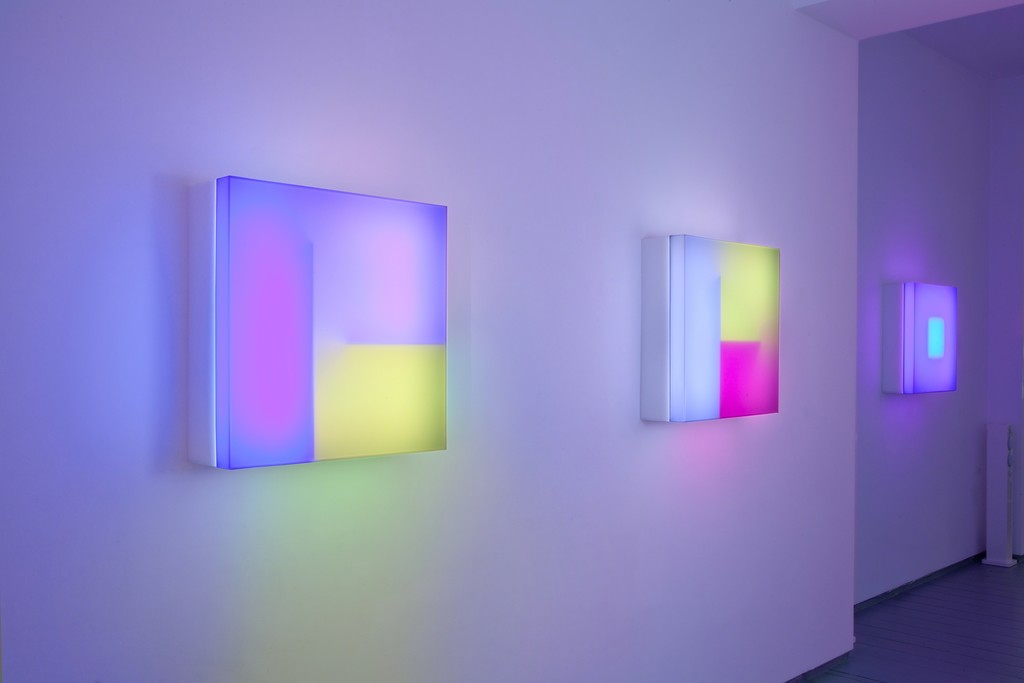 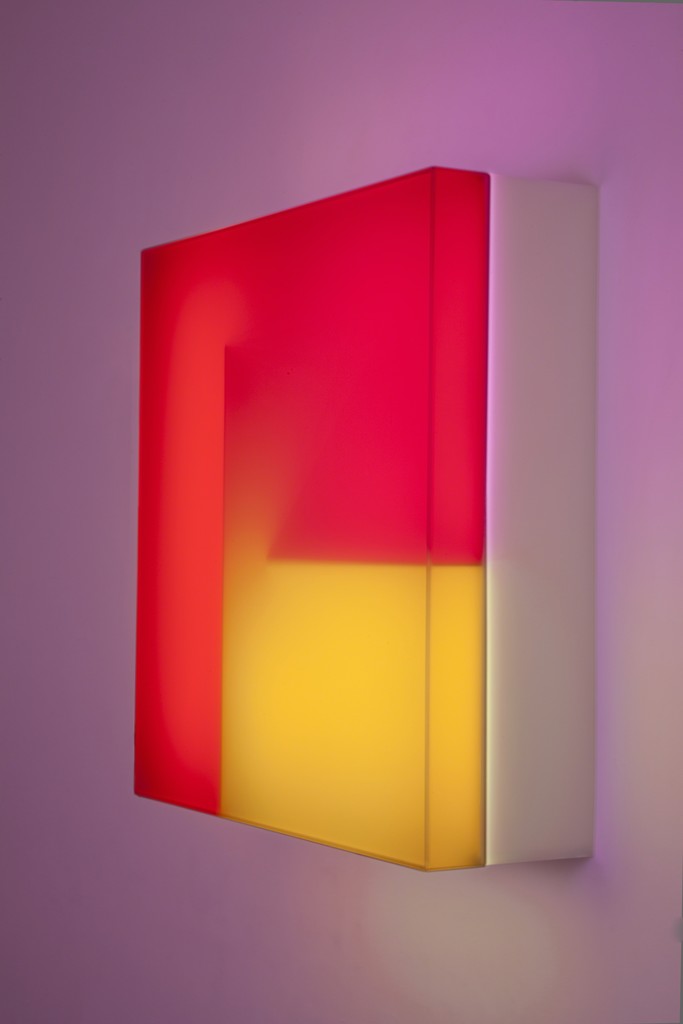 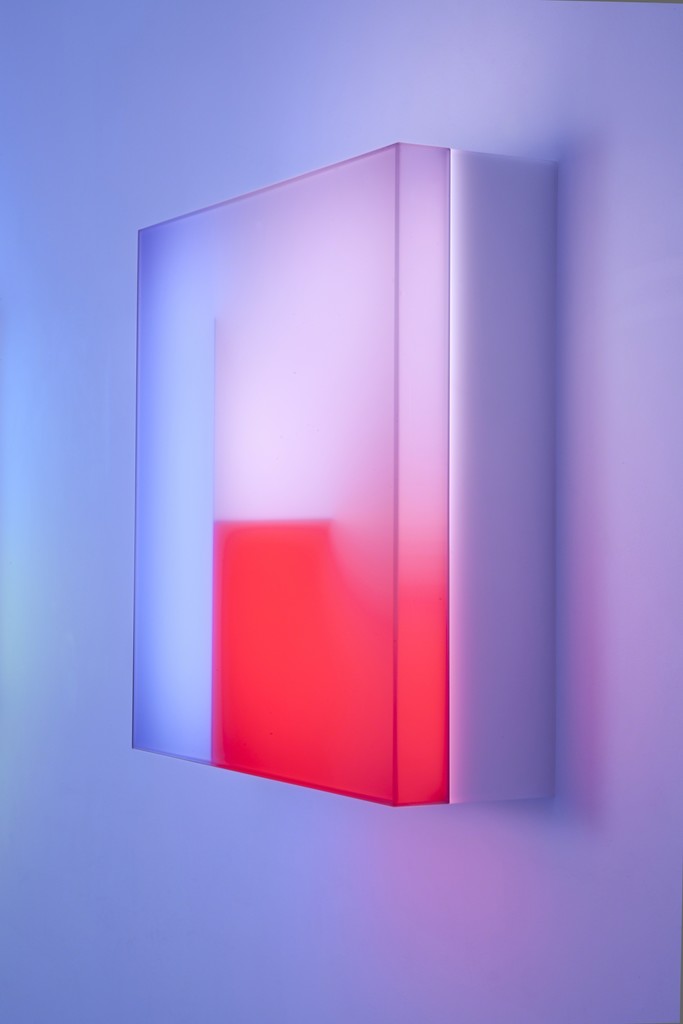 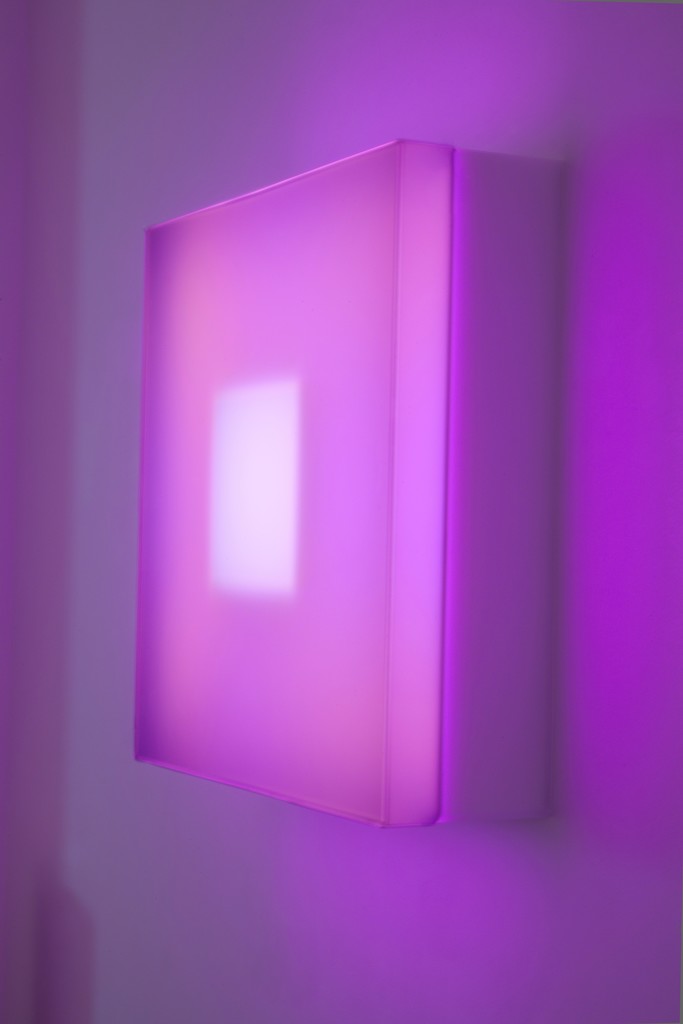 Paul Stolper Gallery is proud to present Brian Eno’s ‘Light Music’, an installation of light pieces, each of which seamlessly phase through an infinite combination of seductive self-generated ‘colourscapes’ using a series of interwoven LED lights, each accompanied by a unique musical composition. By extending temporal boundaries with a work that seemingly has no beginning or end, no finality, Eno “encourages people to stay in one place for a while”. “If a painting is hanging on a wall we don’t feel that we’re missing something by not paying attention to it. Yet with music and video, we still have the expectation of some kind of drama. My music and videos do change, but they change slowly. And they change in such a way that it doesn’t matter if you miss a bit”. Eno has composed a new piece of music specifically for the gallery that will be played for the duration of the show.
Eno will also exhibit two lenticular works, ‘Center Decenter’ and ‘Tender Divisor’, which use a medium by which lenses give his printed image the illusion of both depth and the sense of animation, giving movement to what would otherwise be a static abstract shape, re-enforcing Eno’s notion of a work “which one can look at and walk away from as one would a painting: it sits still and you move.” This convergence of different media is key to his work, “painting and music have always been interwoven for me. I started playing with light as a medium at about the same time I started playing with sound when a teenager. When I look back on what I’ve made over the intervening years it seems to me I’ve been trying to slow music down so it became more like painting, and to animate paintings so that they became more like music…in the hope that the two activities would meet and fuse in the middle.”

Brian Eno is an English musician, composer, record producer and visual artist known as one of the principal innovators of ambient music and generative painting. As a visual artist he has been exhibiting since the late 1970s and has been showing his work regularly since, from Tokyo to Cape Town, Rio de Janeiro to New York, London to Madrid. His work is dedicated almost exclusively to the possibilities that the medium of light provides. In 2009, Eno was given the very rare invitation to exhibit on the iconic sails of the Sydney Opera House in Australia. This was achieved using an array of powerful projectors with the light thrown across Circular Quay. The installation consisted of Eno’s own software 77 Million Paintings, a piece that creates an ever-changing, albeit at an almost imperceptible speed, light painting.