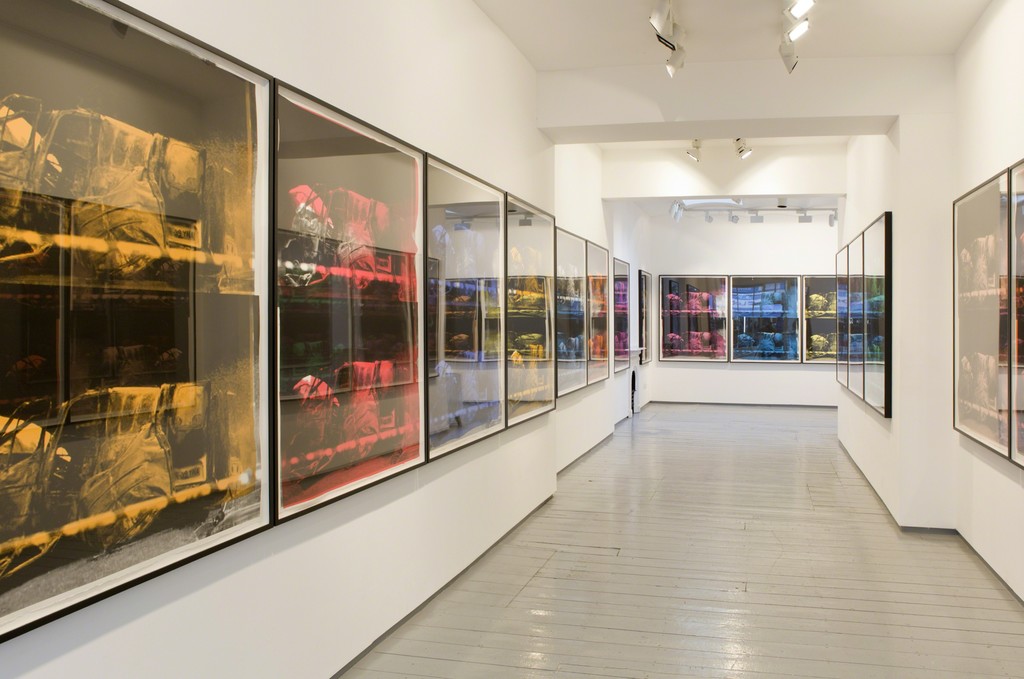 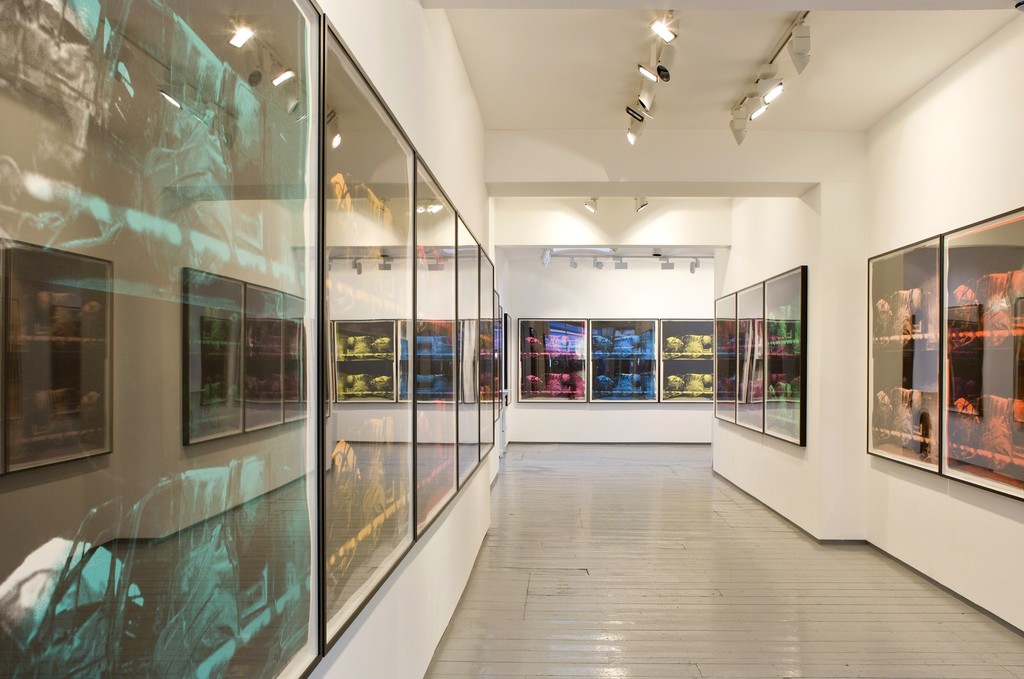 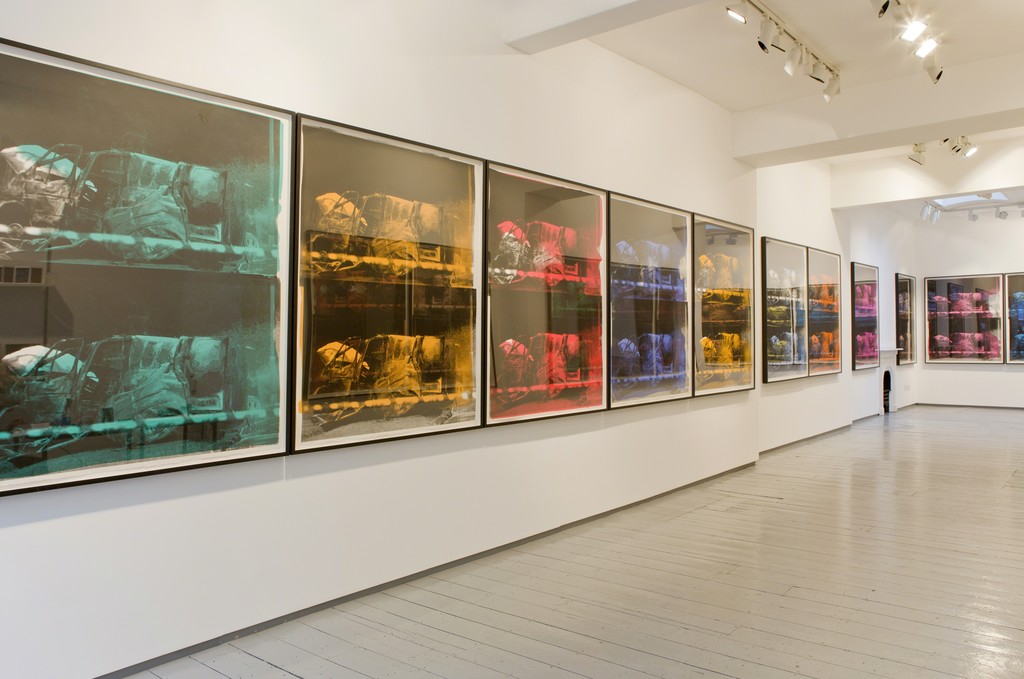 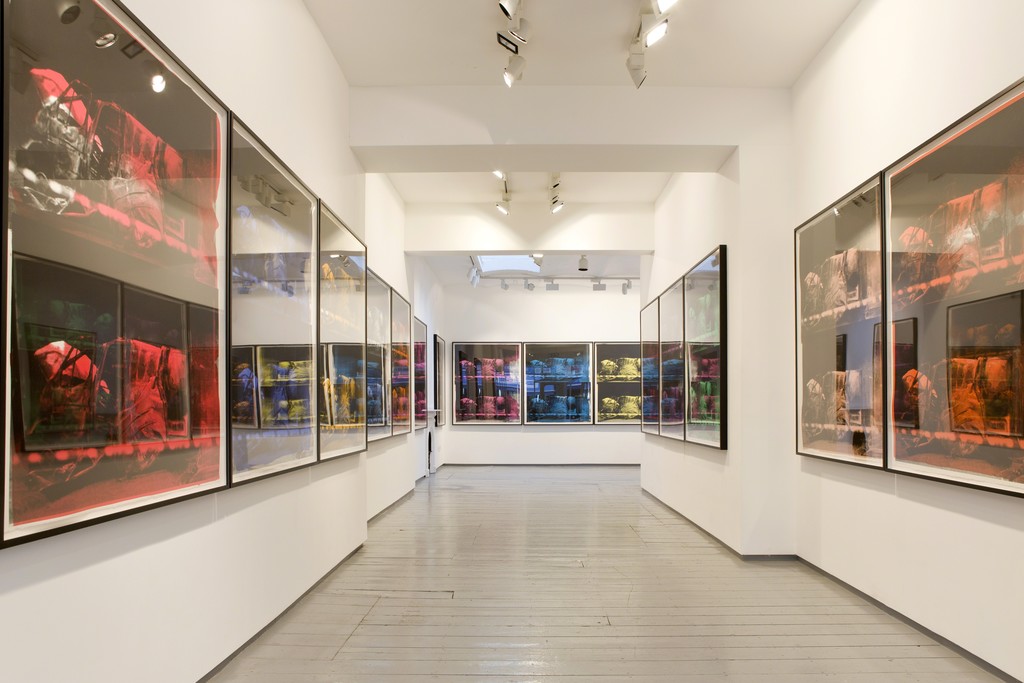 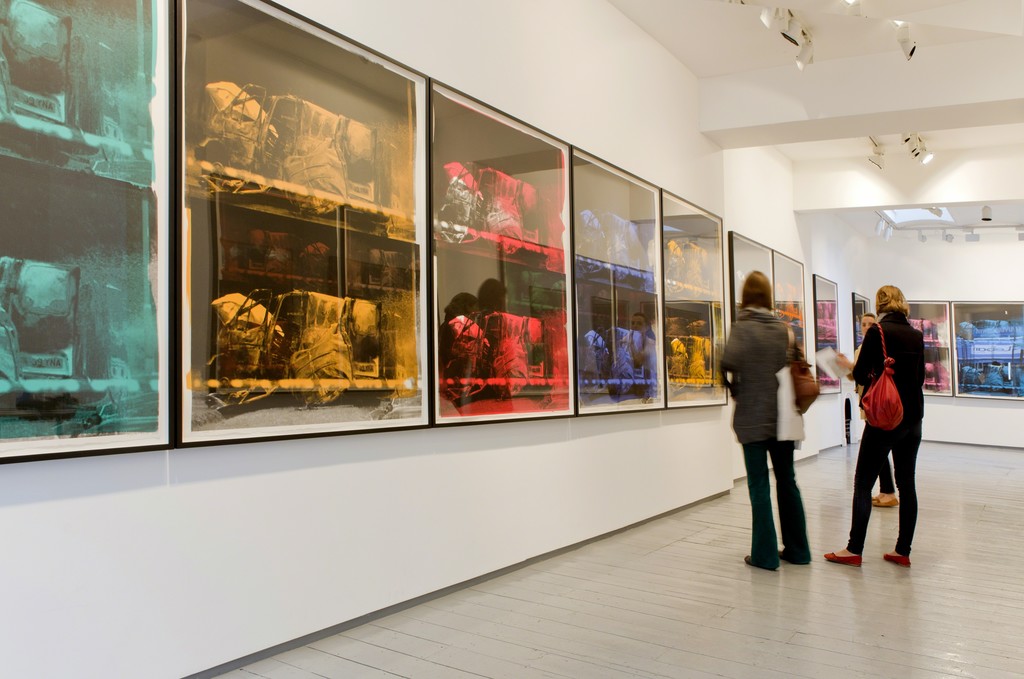 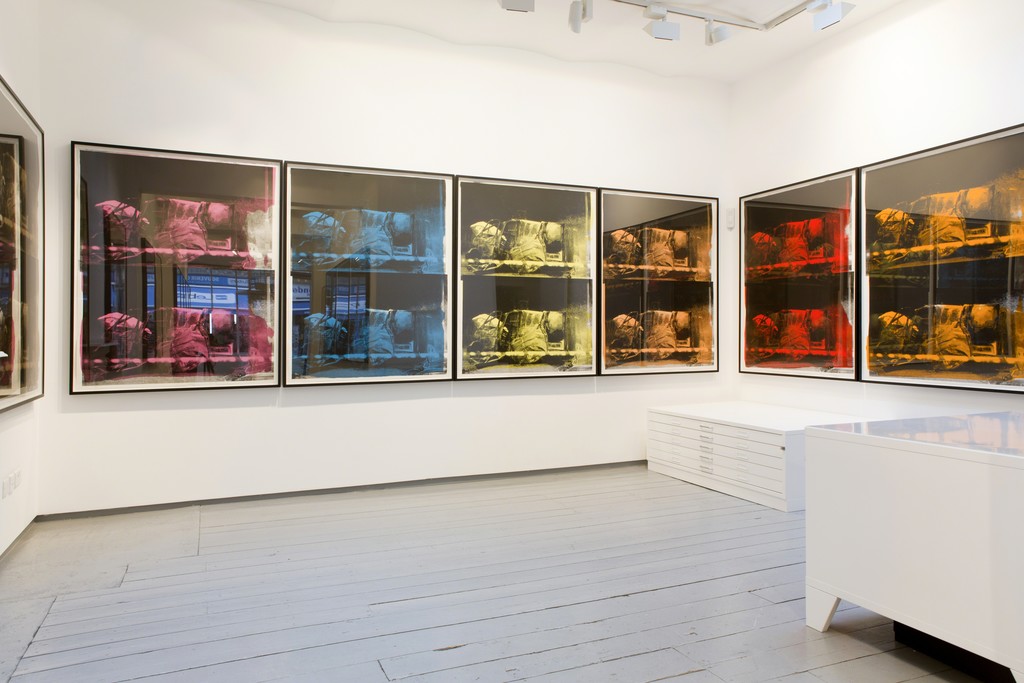 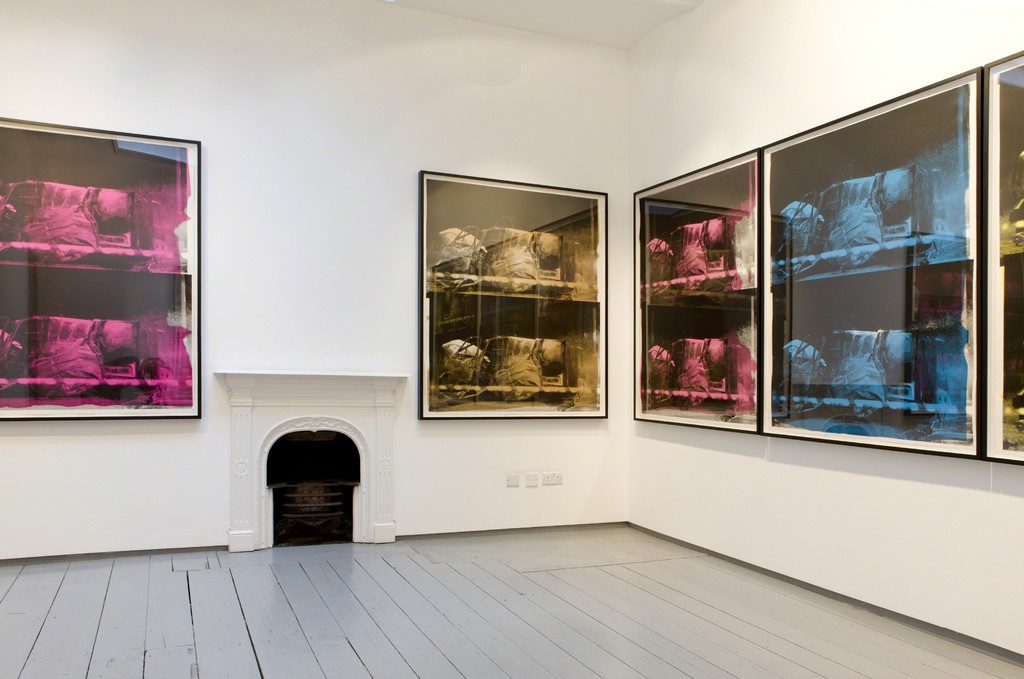 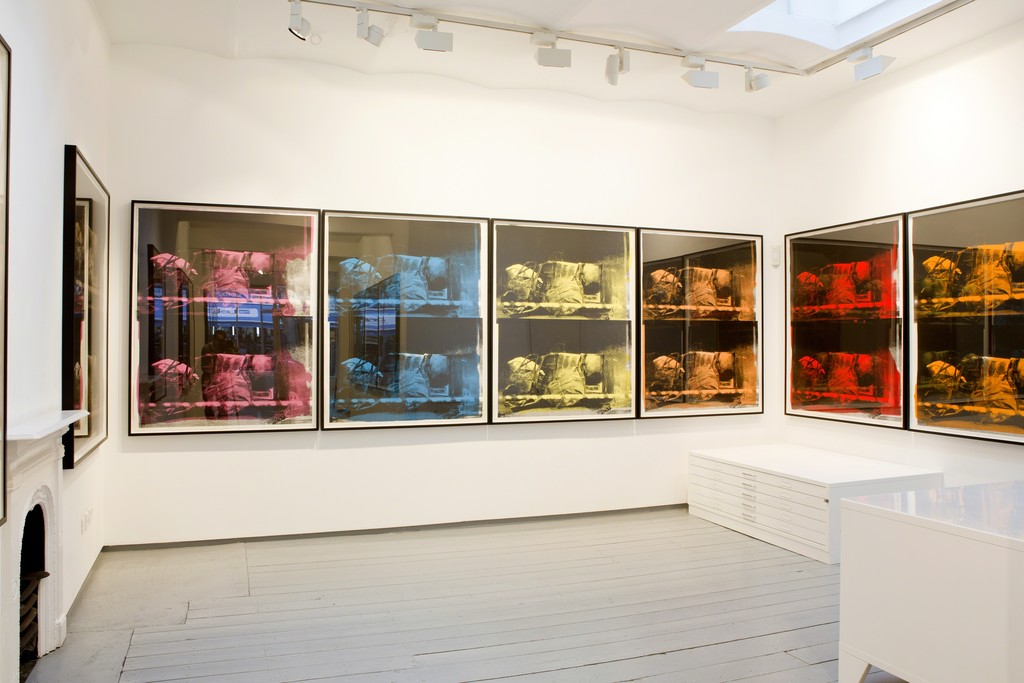 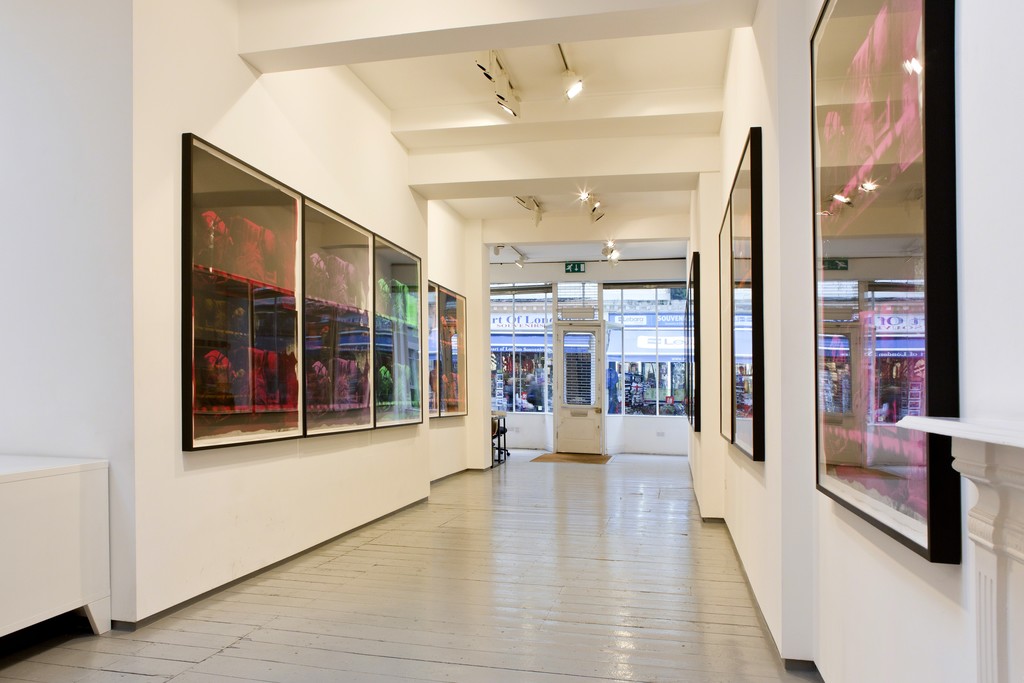 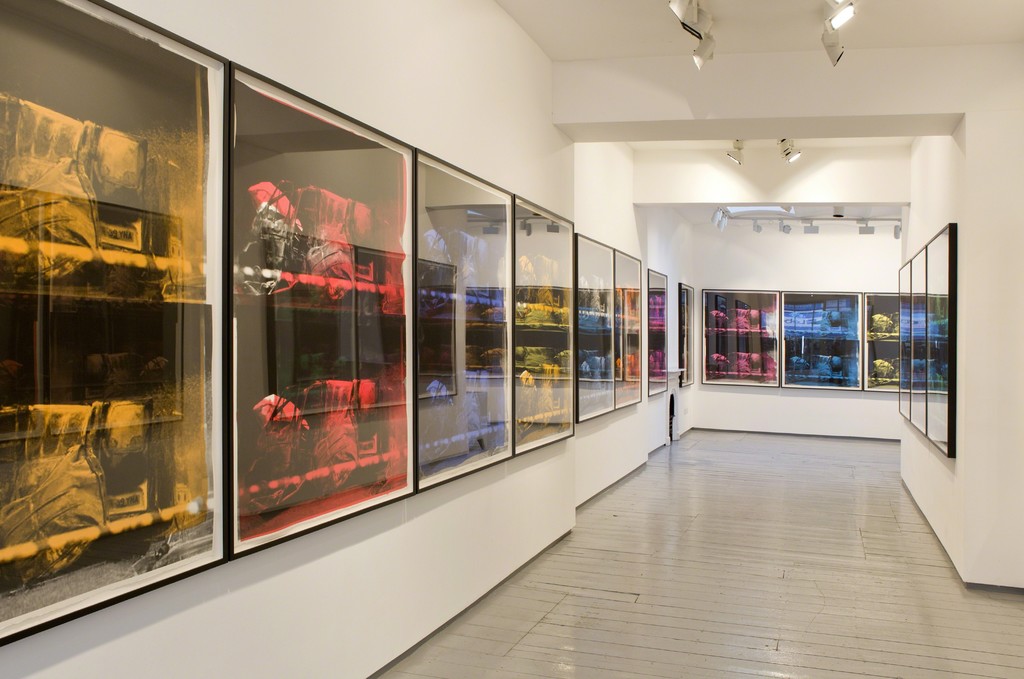 Paul Stolper Gallery is pleased to announce Gavin Turk’s ‘Transit Disaster,’ a new series of 20 unique silkscreen prints depicting two repeated images of a single transit van. Each printed in a different colour the installation mimics Warhol’s group of Shadow paintings (1979) with its hypnotic sequence of colour and image.
Just as Warhol’s car crash paintings from his ‘Death and Disaster’ series (1962 – 1963) anesthetized violence through multiple reproductions in bright, saturated colours, so too do Turk’s ‘Transit Disaster’ series become abstractions of abstractions, transforming horror into beauty and death into something striking and alluring, as the deformed metal of the crashes becomes textures, patterns and shapes. However, the series is more than simply a contemporary re-cycling of Warhol’s paintings, by replacing the American car with an image of a transit van, a symbol of a certain burnt-out, both literally and symbolically, working class Britain, Turk incorporates ideas of social decline into Warhol’s glamorous oeuvre.
Concerns with authorship, authenticity and celebrity have been evident in Turk’s work since he rose to prominence in the early 1990’s. Appropriating visual styles from the modern avant - garde including Yves Klein, Piero Manzoni and Andy Warhol, Turk uses 20th century imagery as a vehicle to describe contemporary anxiety. Lamenting the demise of the British working class culture, and indeed notions of British Identity in general, the crashed and burnt - out transit van is a visual manifestation of the urban unrest that accompanies post – industrialized Britain. At the same time ‘Transit Disaster’ describes the consumer culture that has replaced ‘Britishness’ and more importantly the growing social divide between classes that is becoming increasingly global in scale. The repeated printed image and seductive array of colours itself mirrors the capitalist mantra of production and consumption. With the recent OCCUPY protests around the globe, Turk’s series displays the effects of the current banking crisis, where the labour force is diminishing, and as such, the demand for working transit vans. Further, the carnage of metal and charred remains recall the London Riots in August 2011, where protests and violence erupted on the streets of London.
Turk’s work has been included in many seminal exhibitions including the latest ground breaking POPLIFE show at Tate Modern (2009) as well as the Venice Biennale (2001), the 46th International Istanbul Biennial (1999), Material Culture, Hayward Gallery, London (1998), and Sensation: Young British Artists from the Saatchi Collection, Royal Academy of Arts, Saatchi Collection, London (1995). Recent exhibitions have included: Gavin Turk: The Negotiation of Purpose, GEM Museum for Contemporary Art, The Hague, The Netherlands; En Face, CAC Malaga, and Oeuvre, Tate Britain Sculpture Court Display, London.  Gavin Turk lives and works in London.