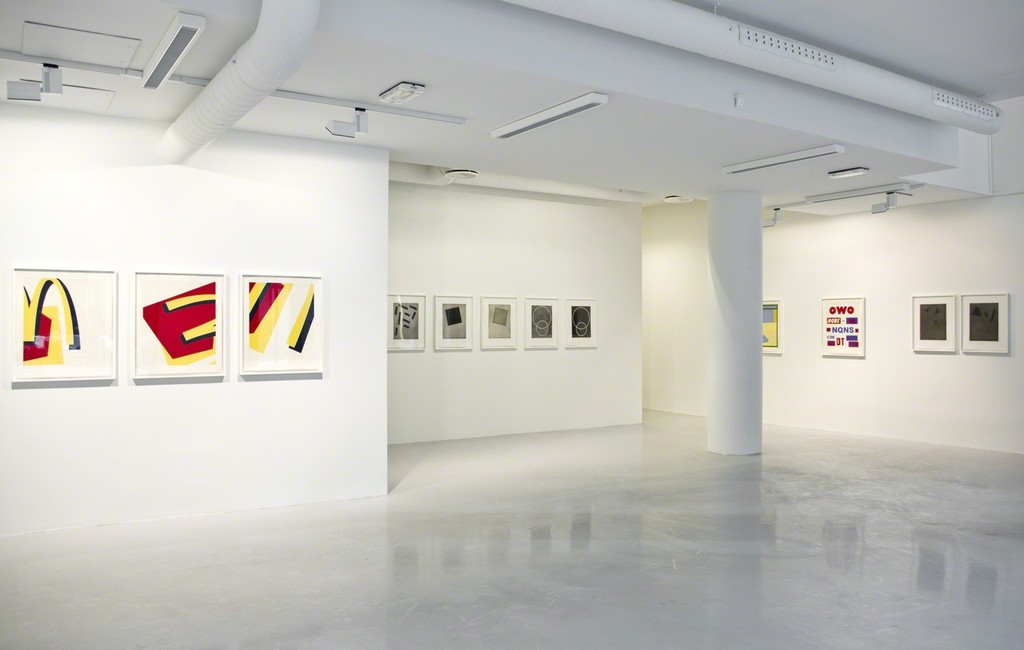 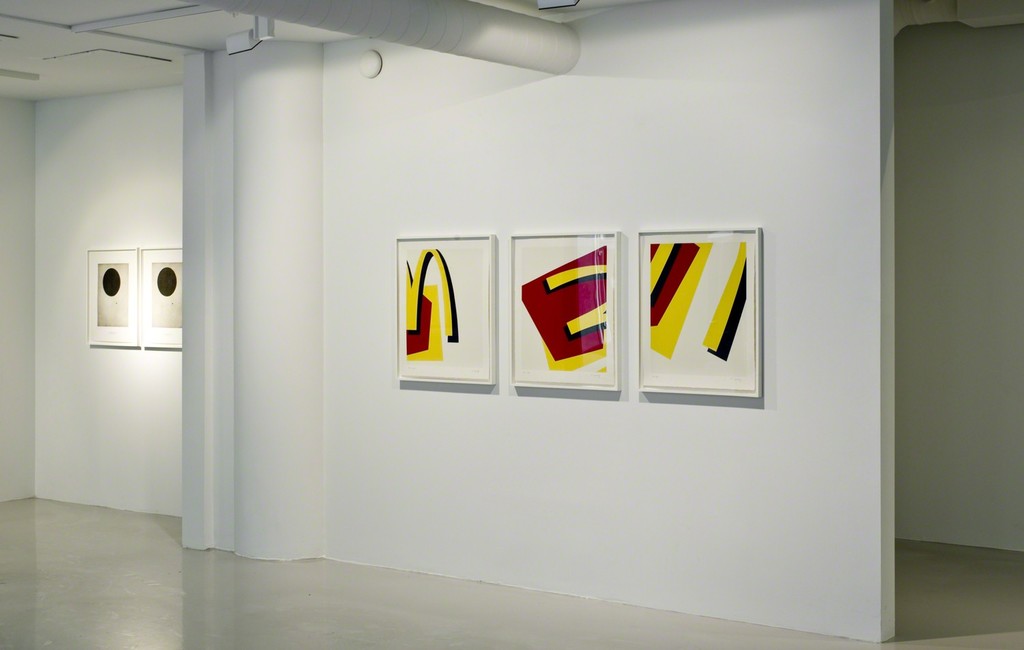 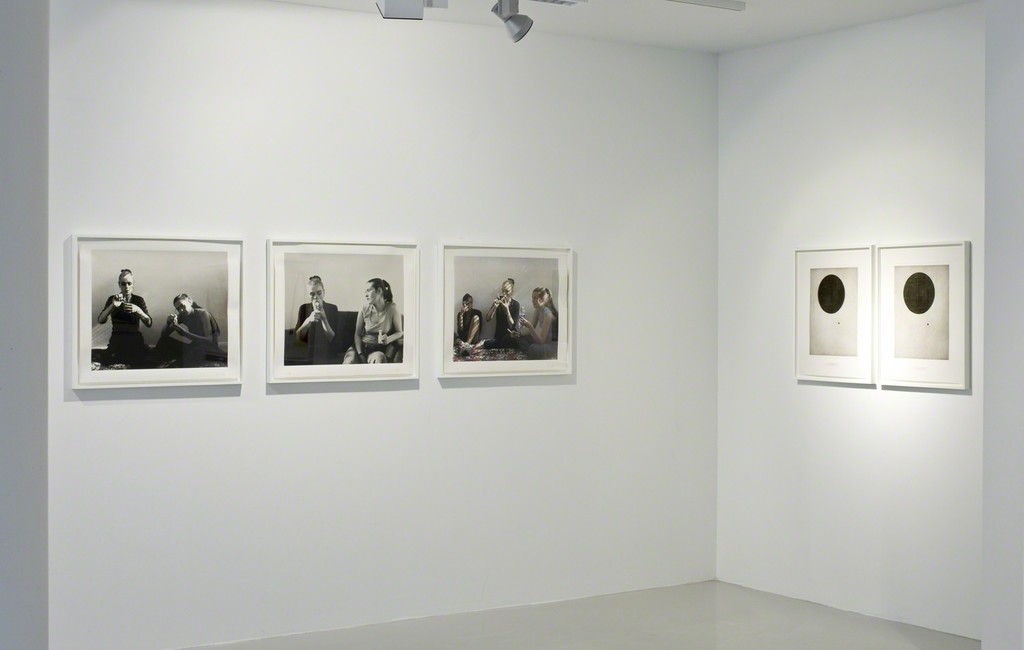 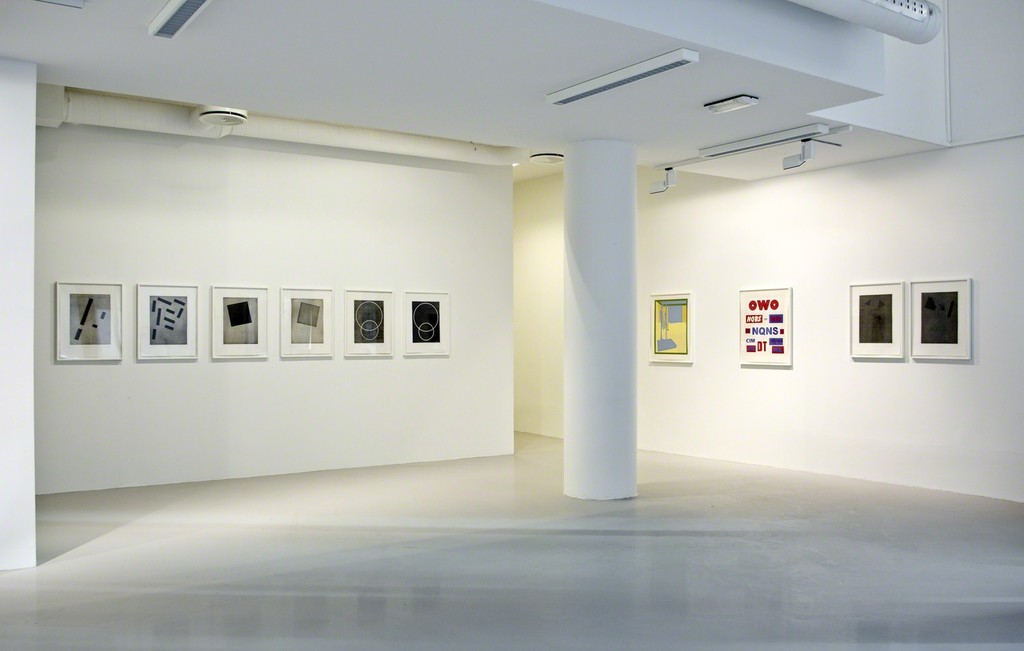 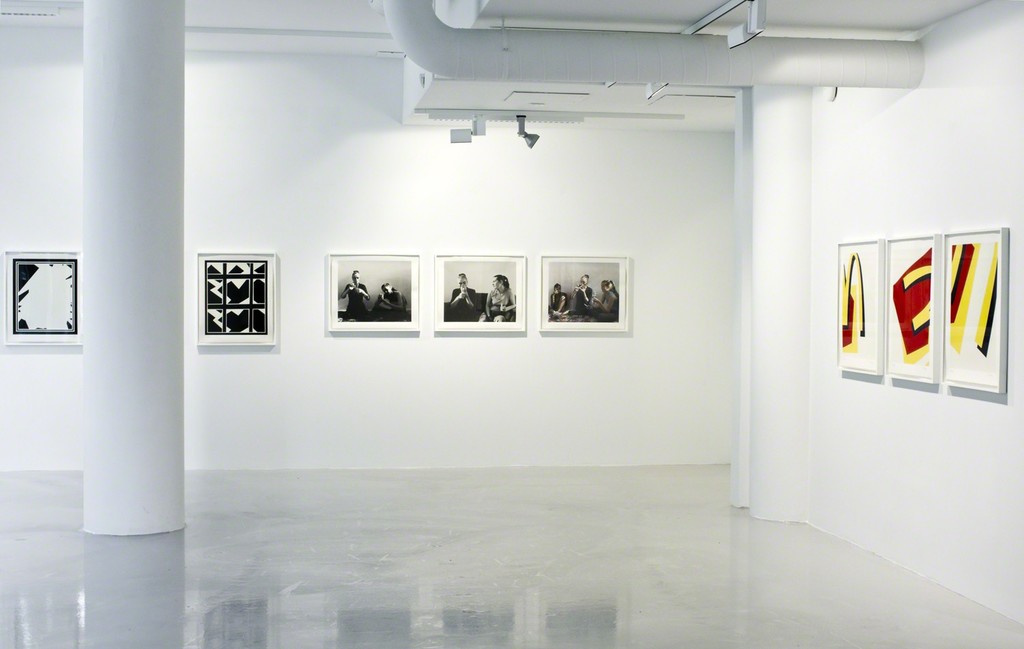 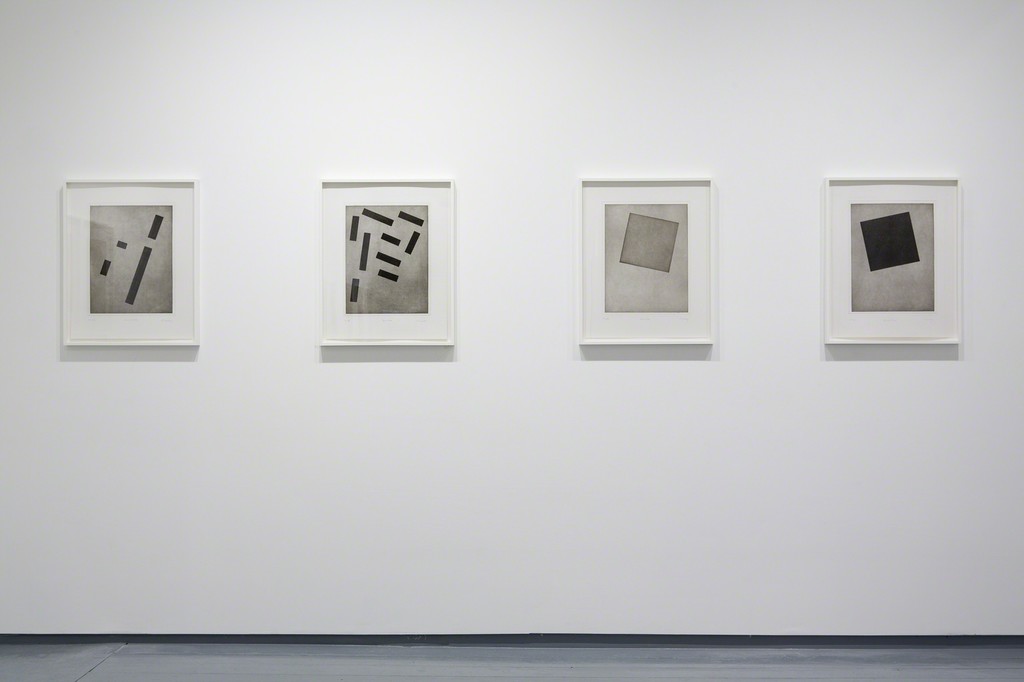 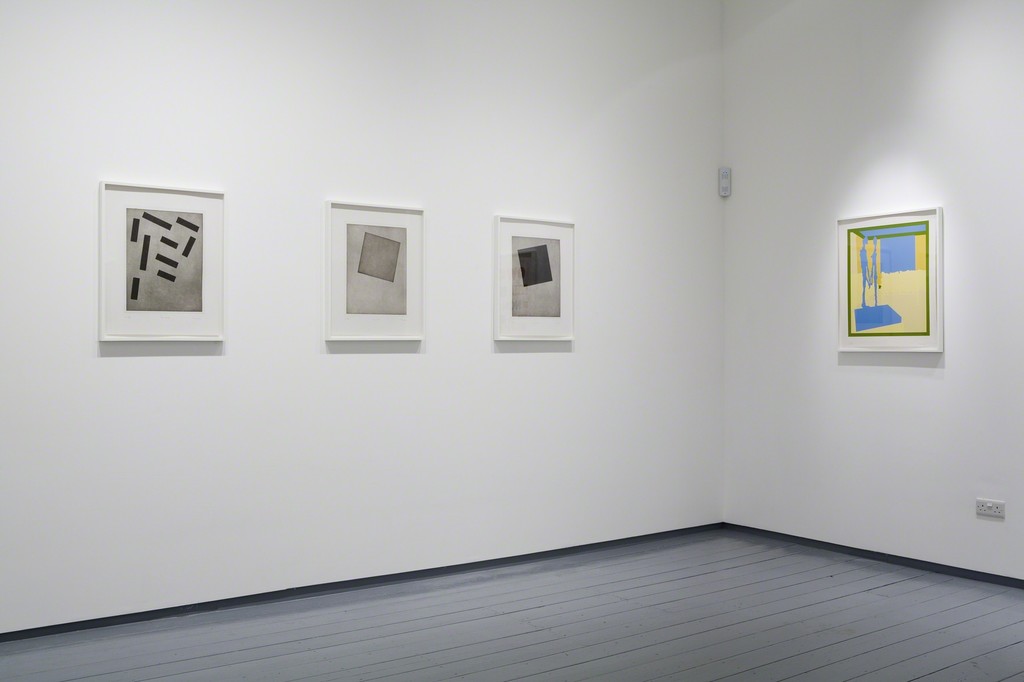 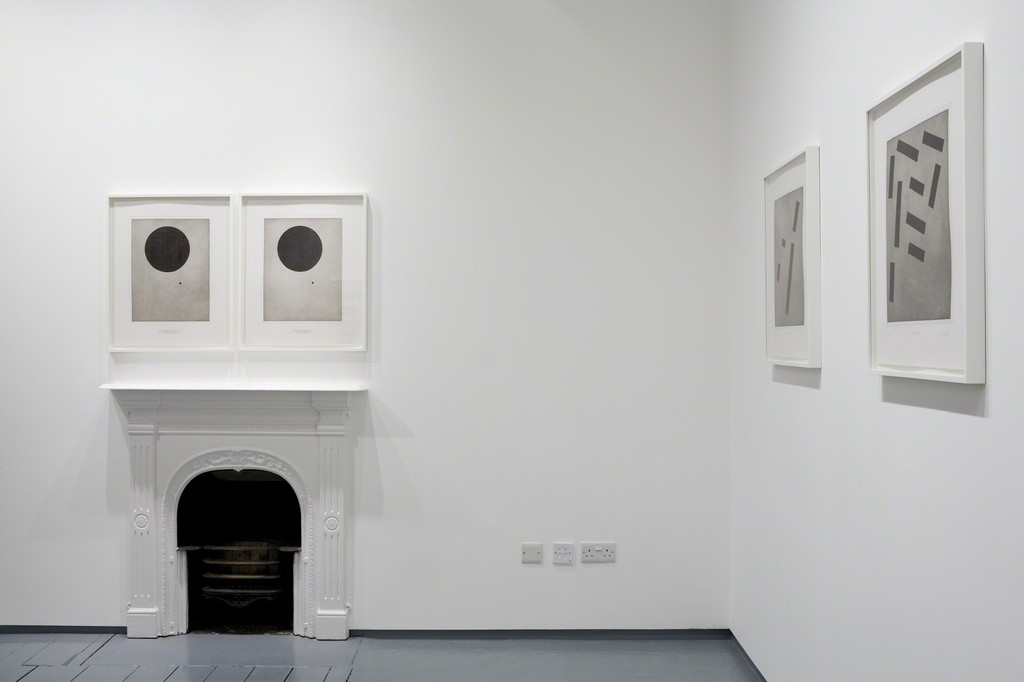 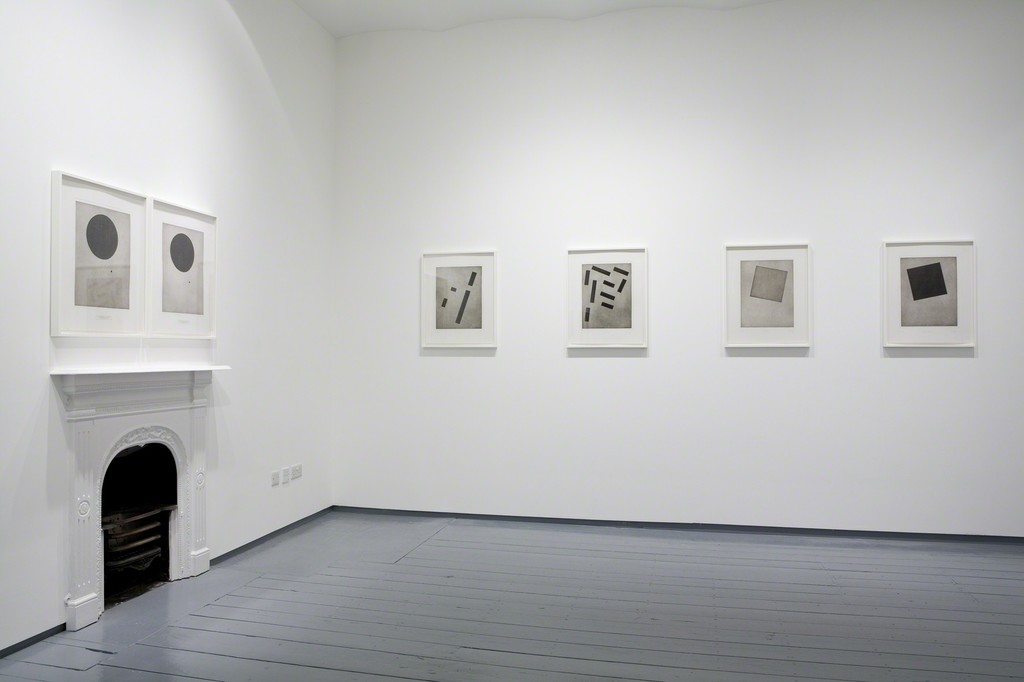 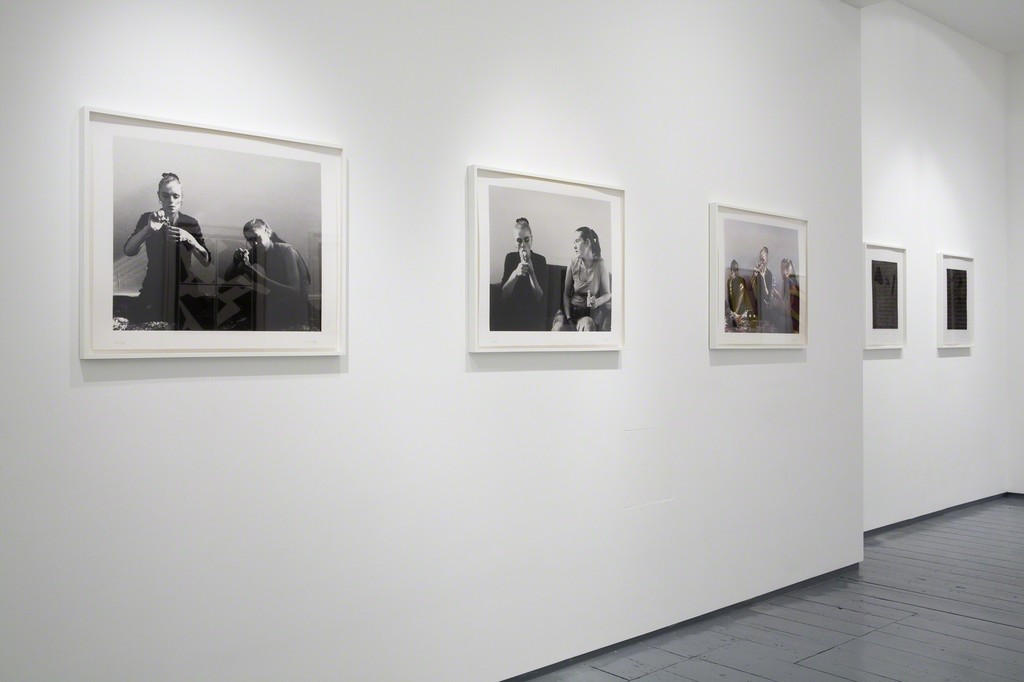 Keith Coventry’s association with the yBa movement of the 1990s is more to do with generation rather than approach to practice. His significance to that generation, and more broadly to the history of contemporary British art in the twentieth and twenty-first centuries is here presented through the medium of printmaking. His engagement with the traditional mediums of sculpture, and more particularly painting, ideally translates into the medium of screenprinting and etching. From the beginning of his exhibition history he has woven a complex set of connections between the expression of a modernist aesthetic in architecture, its inevitable failure to deliver its promised utopian vision and the concomitant manifestation of that modernism in painting and sculpture of the 1920s to 1960s.
Kasimir Malevich’s Suprematism is sublimated into Coventry’s series of ‘Estate etchings’. But whereas Malevich stated that he was ‘trying desperately to liberate art from the ballast of the representational world’ Coventry’s finely worked etchings are full of representational content. They are directly derived from the schematic maps of public housing estates and as all other content is removed, our initial response to the work is on a purely aesthetic level. However, the titles serve to unpack the latent content of the work. In the ‘Ontological etchings’ Coventry has extracted all the information from the same maps except for the directional arrows, ‘you are here’. The implicit play on words implies its opposite, ‘you are nowhere’, pointing to the sense of rootlessness of many of the inhabitants of these essentially failed public housing projects.
The ‘Junk’ silkscreens similarly access the detritus from the urban periphery and recycle it as high art by conflating it with the formal attributes of modernist abstraction. Fragments of the crumpled remnants of McDonalds wrappers are cropped and positioned within the rectangle of the print in such a way that they become iconic constructivist compositions in stark yellow, red and black. McDonalds, the ultimate expression of globalised capitalism, by being conflated with the schematics of high modernism, is inflected back into the history of modernism’s implicit ideals of equality, access, universality and utopianism. Unlike conventional silkscreen prints the ink has been applied in several thick layers, building up a substantial and ‘clotted’ facture, echoing the surface of the original paintings.
Coventry’s series of ‘Broken Window’ paintings is here translated into a powerful series of silkscreen prints. Images that are symbolic of urban decay and violence, etched in black and white become ‘shapes’ reminiscent of Raoul Dufy textile designs and Vorticist imagery.
Other groups worked into etchings include ‘Supermodels’, as well as ‘Crack Pipes’, the ultimate symbol of the disintegration of contemporary Western urban society. Improvised from biros and plastic mineral water bottles, Coventry has rendered them as the imprint of a Morandi still-life. They shimmer in the tenebrous gloom of a cross-hatched field, dark satanic mills standing in for tower-blocks and strung-out tenants, archaeological remnants of an age of social implosion.
Keith Coventry’s ability to conflate both the history of recent art and the realities of British society as expressed in both the architecture and the more banal aspects of the urban environment places him at the very centre of recent developments in contemporary art. His re-appraisal of the relationship of art history to the contemporary urban environment has produced a unique body of work which constitutes a true ‘history painting’ of the twentieth and twenty-first centuries.