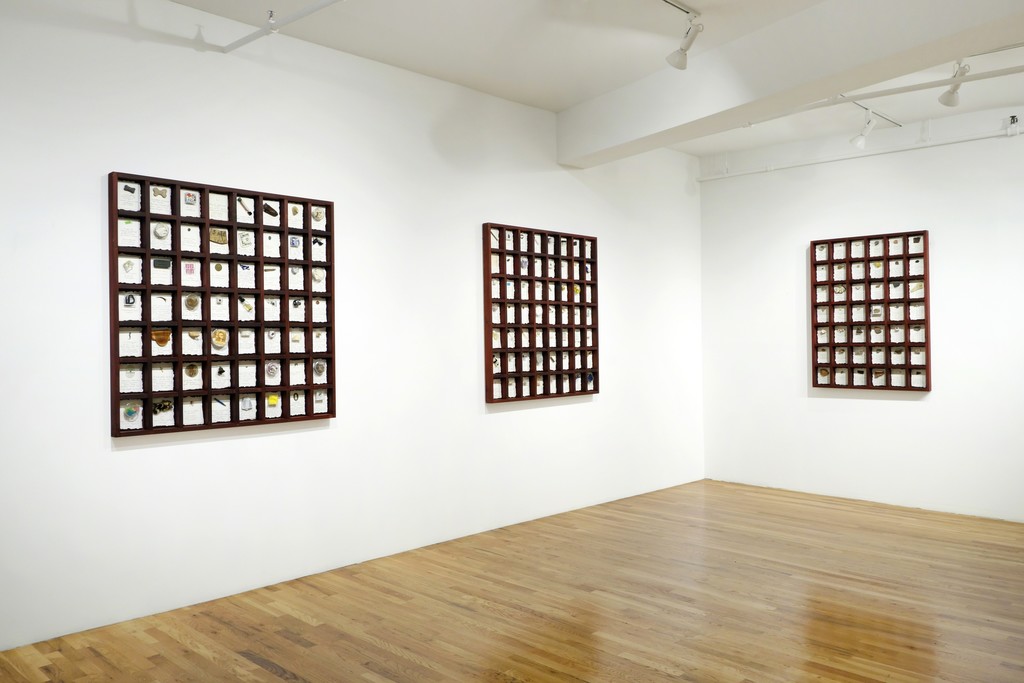 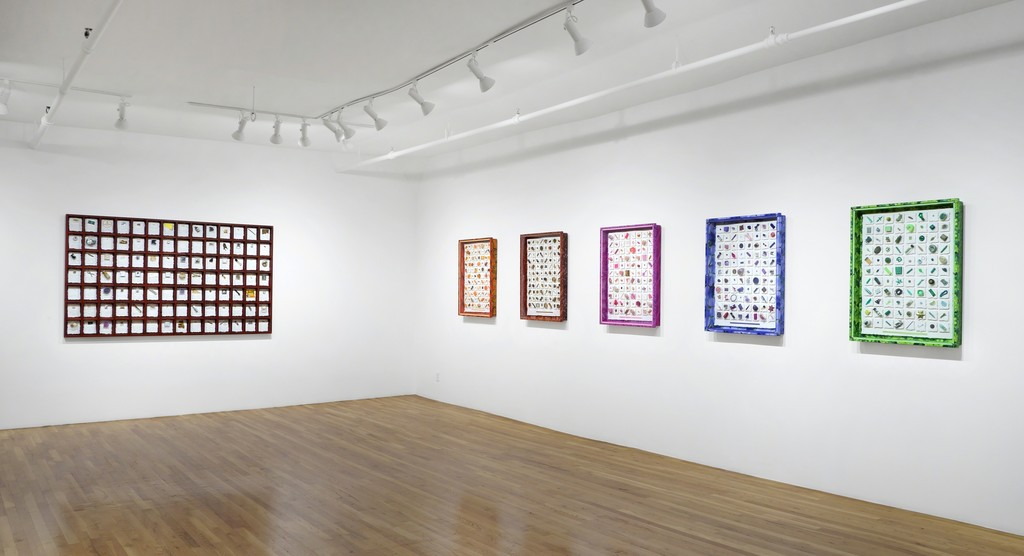 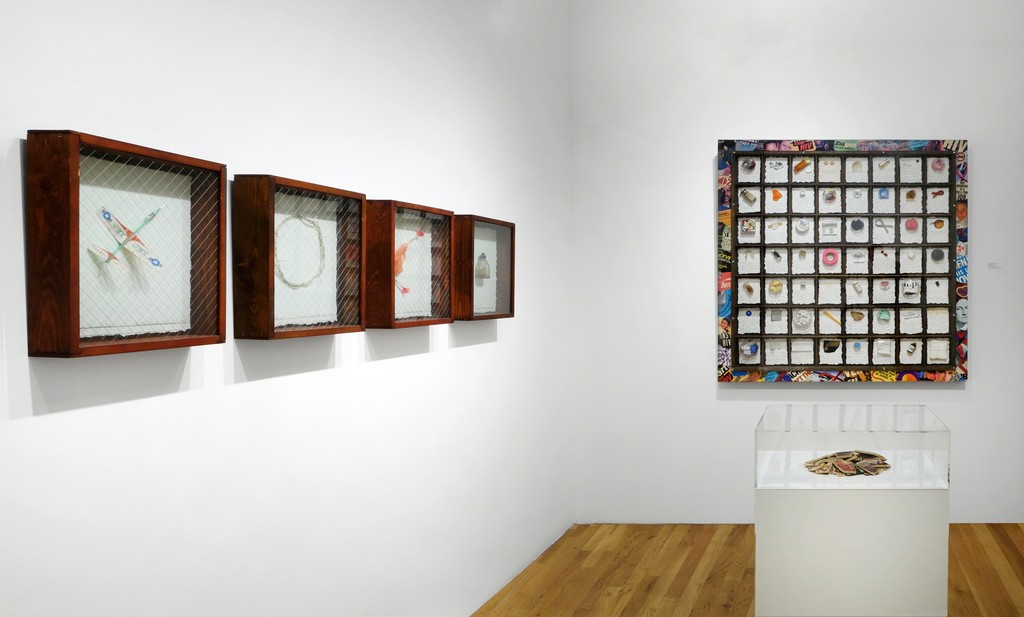 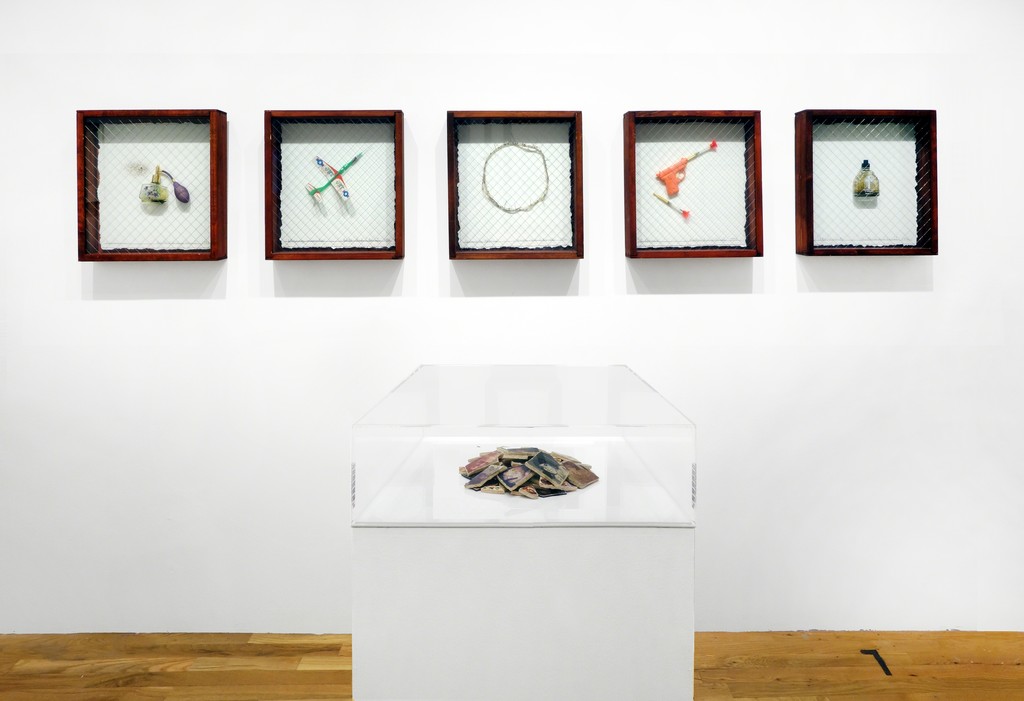 Barton Lidice Beneš first came to prominence during the 1980s with his whimsical constructions of shredded currency and later with his signature “museums,” gridded arrangements of relics from Ancient Egypt to Hollywood. Museology focuses on a series of such works from 1999 that will be presented in New York for the first time. Thematically categorized and methodically mounted, these treasure-troves of quirky and evocative memorabilia impart unexpected associations by aggregating fragmentary objects from an international network of co-conspirators. In one work, an evocative passage of adjacent cells presents a brass button from a Palestinian army uniform, a jellybean from President Reagan’s desk in the Oval Office and a placebo pill from a clinical trial treating CMV, a virus often associated with AIDS related complications.

Beneš’ irreverent and unapologetic frankness playfully straddled the high and low, winning him a devoted following that extended beyond the art world to celebrities like Larry Hagman and Sharon Stone, both of whom added to the artist’s storied wunderkammer, housed in New York’s Westbeth and subsequently reinstalled at the North Dakota Museum of Art following his death in 2012. In his 2002 monograph Curiosa: Celebrity Relics, Historical Fossils, & Other Metaphoric Rubbish, Beneš writes:

Beneš was a first-generation veteran of the AIDS crisis, often incorporating cremation ashes, pills, intravenous tubes and even his own HIV+ blood into his work. These provocative pieces confront HIV/AIDS head-on, blending political activism, visual poetry and a wicked sense of humor, forcing viewers to face their fears of death and transmission. His work continues to serve as a symbol of resistance, engaging a new generation in the evolving conversation about art and AIDS.
At the forefront of New York’s burgeoning gay scene in the post-Stonewall era, Barton Lidicé Beneš was also featured in numerous documentaries about Art, AIDS and gay history, including Lovett Productions’ Gay Sex in the 70s. His work has been exhibited nationally and internationally at The Cleveland Museum of Art; North Dakota Museum of Art; The Katonah Museum of Art; The New York Public Library; and Aldrich Museum of Contemporary Art, as well as Centre Pompidou, Paris; Boras Konstmuseum, Sweden; and Old Town Hall, Prague. His work is in the permanent collections of The Art Institute of Chicago, The Smithsonian, The U.S. Mint and North Dakota Museum of Art. This is the artist’s third solo exhibition at Pavel Zoubok Gallery.