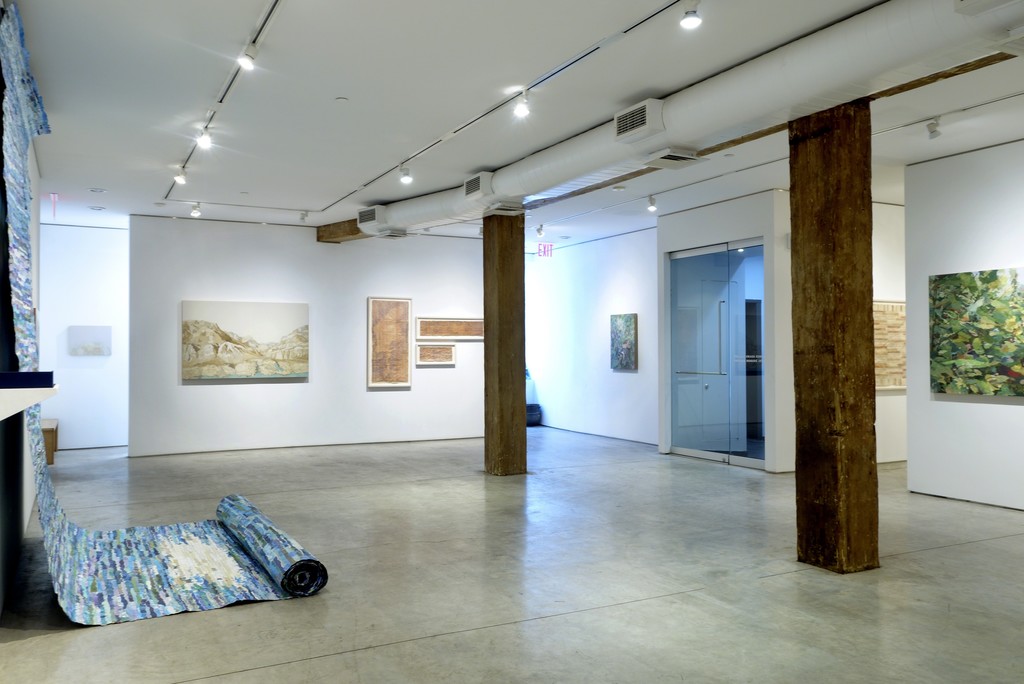 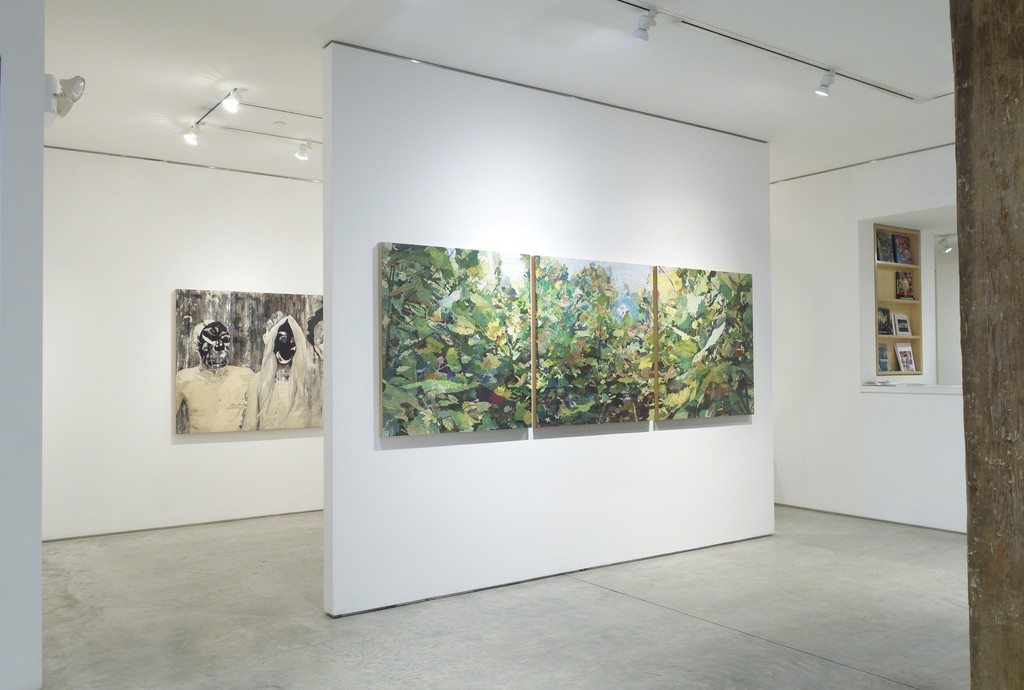 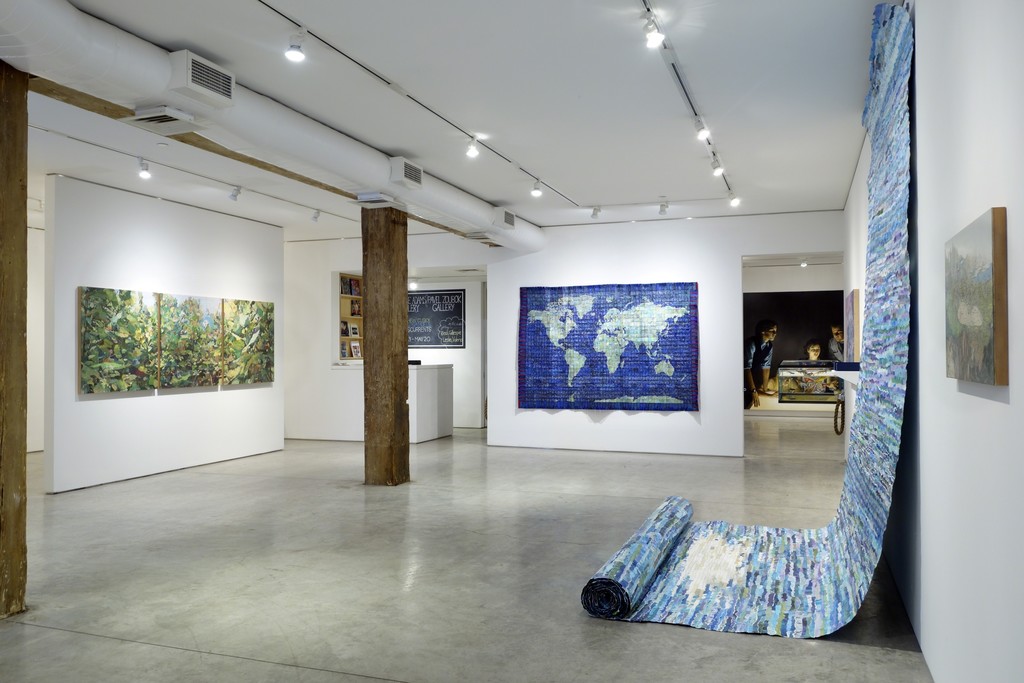 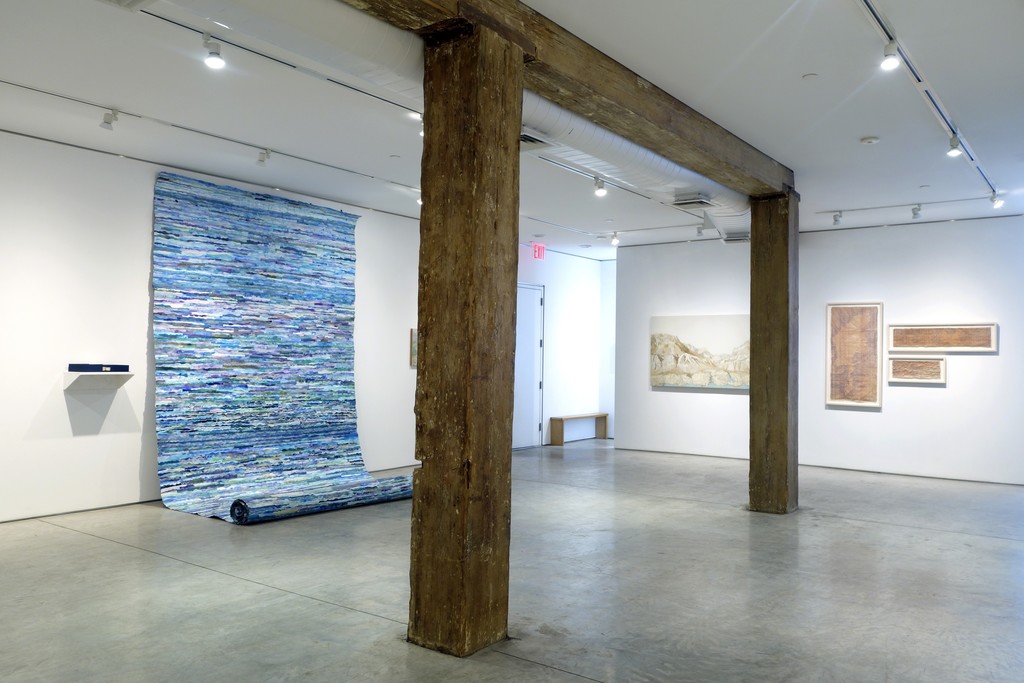 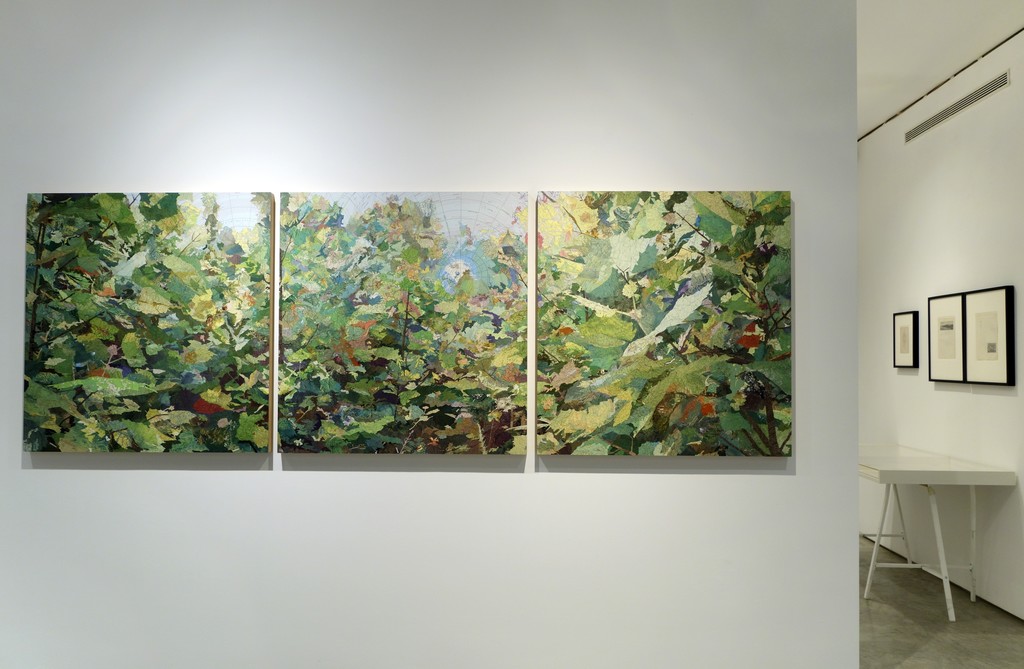 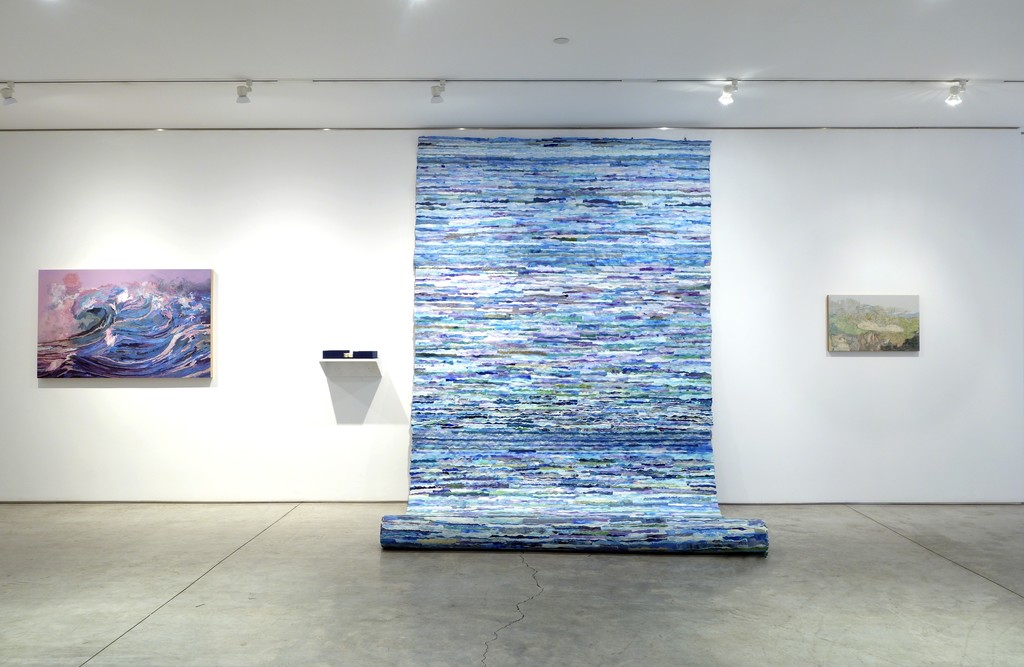 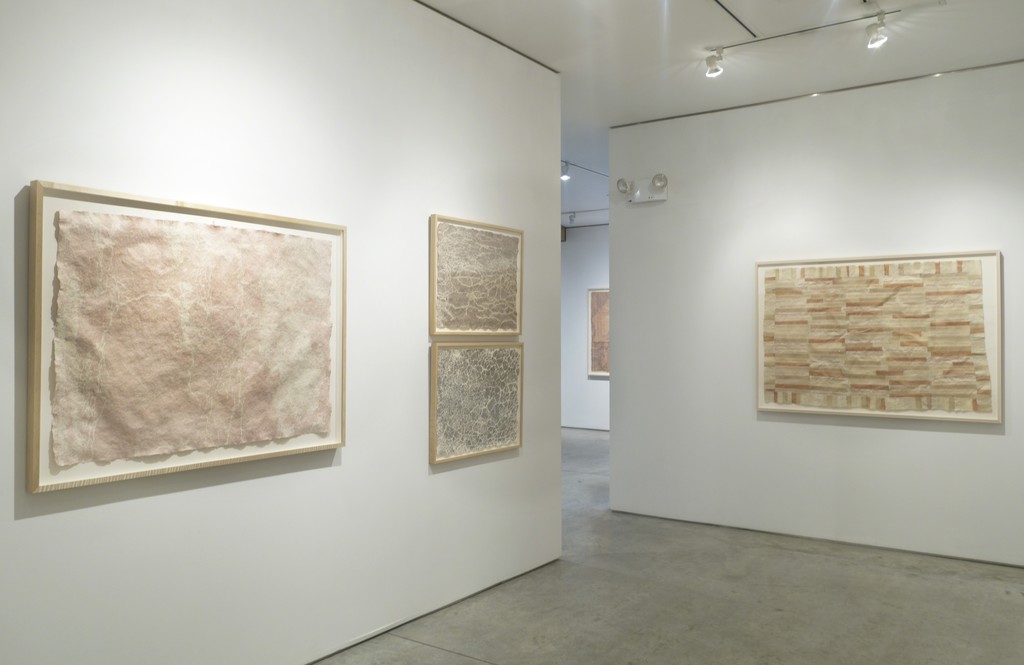 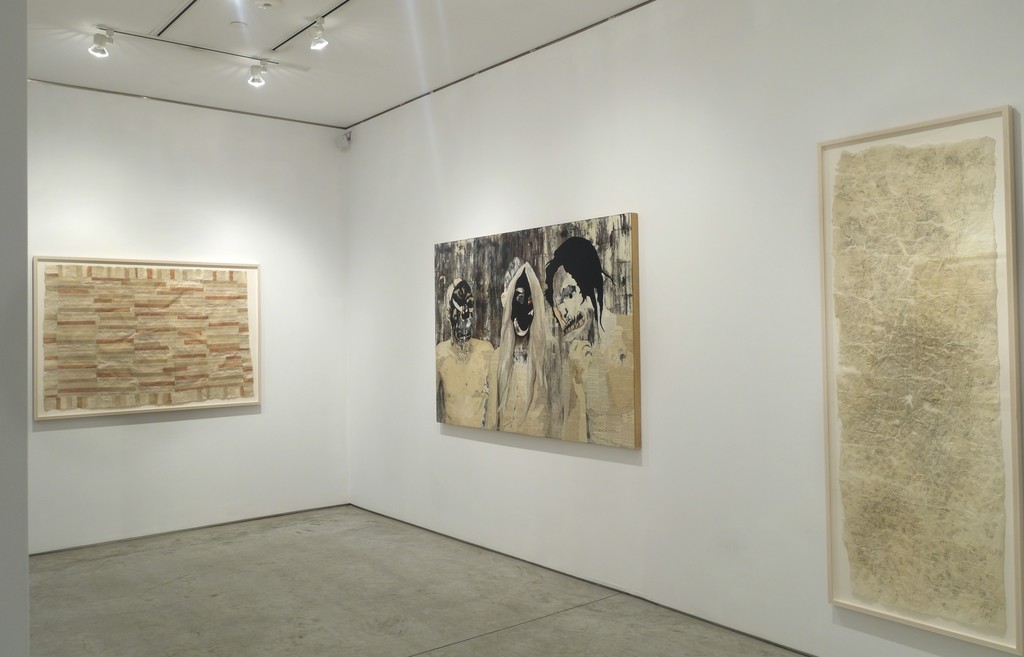 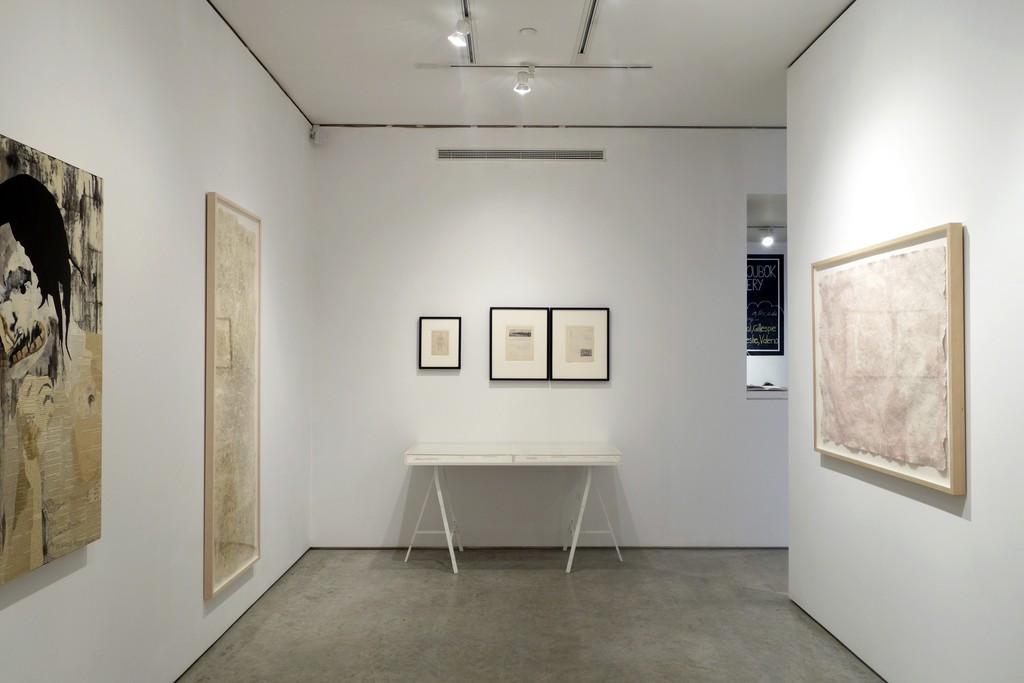 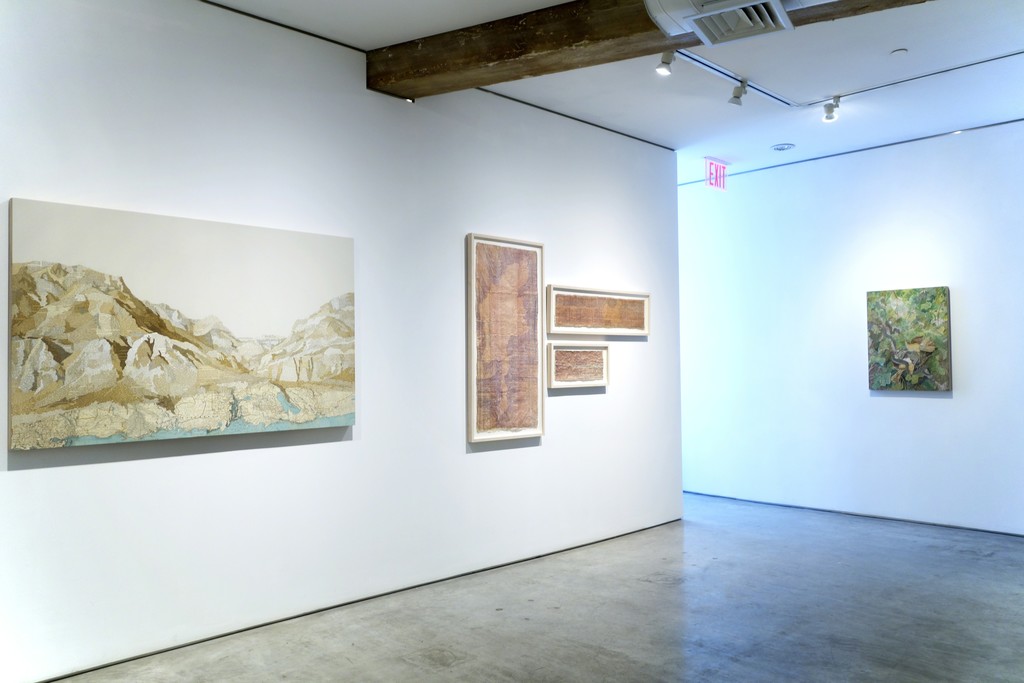 As an alternative to paint, Matthew Cusick employs an inlaid collage technique, which utilizes the inherent line, motion and prescribed palettes found in maps and other printed ephemera. In his sprawling landscapes, crashing waves and dense forests we begin to see not only the beauty and grandeur of nature, but also its violence, hidden threats and isolation. This duality is clearly expressed in Waldeinsamkeit, which translates as “forest” and “solitude or loneliness”. The composition of this four by ten foot, multi-paneled piece is based on two black and white photographs taken in Virginia during the artist's first cross-country road trip in the early 1990s. Cusick states:

I also experienced an extremely powerful transcendental, almost hallucinogenic feeling as a breeze caused the patterns of light and shadow of the sun penetrating the forest to swirl around me. It was one of those moments, like certain dreams, that you never forget the essence or feeling of. The pictures I snapped almost captured the feeling but I always knew I would need to ‘paint’ it to fully capture what I felt.

Twenty-five years later, Cusick was able to transform these treasured images into a disorienting pictorial space that invites contemplation.

While Cusick meticulously researches, collects and archives his source materials, Diane Samuels builds on intensive community engagement and a passion for literature in the form of interviews, conversations, archival documents, folk tales and storytelling. Using the words and stories of writers and non-writers alike, Samuels painstakingly transcribes in her signature micro-script entire novels, line-by-line, onto countless fragments of handmade, painted and hand-dyed paper. In one work on view, Moby-Dick, Herman Melville’s unforgettable opening, “Call me Ishmael” is found at the top corner of this epic 42-foot scroll then coincidentally reappears in the final words of Samuels' newest work where she has transcribed by hand the first lines of 1,740 books in her personal library. This imposing work, titled First Lines, comprised of small rectangles of handmade paper, comes together to form a richly hued mappamondo, representing the myriad ways in which reading has shaped her understanding of the world. Each rectangular segment is meticulously painted, drawn and collaged, then methodically numbered and recorded with title and author in a legend found in the blue and magenta border round the outer edge. When reflecting on her process Samuels writes:

My projects based on words, and particularly the books I hand-transcribe, explore home, place, and exile, what it means to make a place in the world, and the relationship of language to place. By slowly reading the books, then reciting them out loud line-by-line and then hand-transcribing each line, I hope to honor the books that have guided my life while demonstrating the meaning of my encounter with them. As a collection, these drawings serve as a library and archive of text essential to my navigating the world and shaping my life.

Matthew Cusick received his BFA from Cooper Union in painting. His work has been exhibited widely, with solo exhibitions at the LUX Art Institute, Encinitas, CA, The Columbus Museum of Art, OH, The Free Museum of Dallas, TX, among others. His work is currently on view at the Old Jail Art Center in Albany, TX and a selection of his work will be included in Go Where the Map Takes You: The Intersection of Cartography and Creativity at the Osher Map Library and Smith Center for Cartographic Education in Portland, ME. His work is in private and public collections including The Nasher Sculpture Center, Museum of Contemporary Art San Diego, Texas State University, Progressive Corporation Art Collection and The Mattsson McHale Foundation. Cusick, originally from New York, lives and works in Dallas.

Diane Samuels holds both a bachelor’s and master’s degree in fine arts from Carnegie Mellon University, a diploma from the Institute in Arts Administration at Harvard University and has received honorary doctorates from Seton Hill University and Chatham University. Her exhibitions include the Andy Warhol Museum, PA, the Carnegie Museum of Art, the Mattress Factory Museum, the Leo Baeck Institute, the Center for Book Arts, the Aldrich Contemporary Art Museum, the Contemporary Arts Center of Cincinnati, the Municipal Museum of Art (Gyor, Hungary), the Synagogue Center (Trnava, Slovakia), the Bernheimer Realschule (Buttenhausen, Germany) and the Czech Museum of Fine Arts. Her work is in public collections including the Carnegie Museum of Art, Bank of New York Mellon, Reed College, Municipal Museum of Art (Gyor, Hungary) and the Ruth and Marvin Sackner Archive of Concrete and Visual Poetry. In 2013, she was the recipient of a Rockefeller Bellagio Residency in Italy and an American Academy in Jerusalem Fellowship. Samuels is the co-founder of City of Asylum Pittsburgh, which provides sanctuary to writers in exile. She lives and works in Pittsburgh.