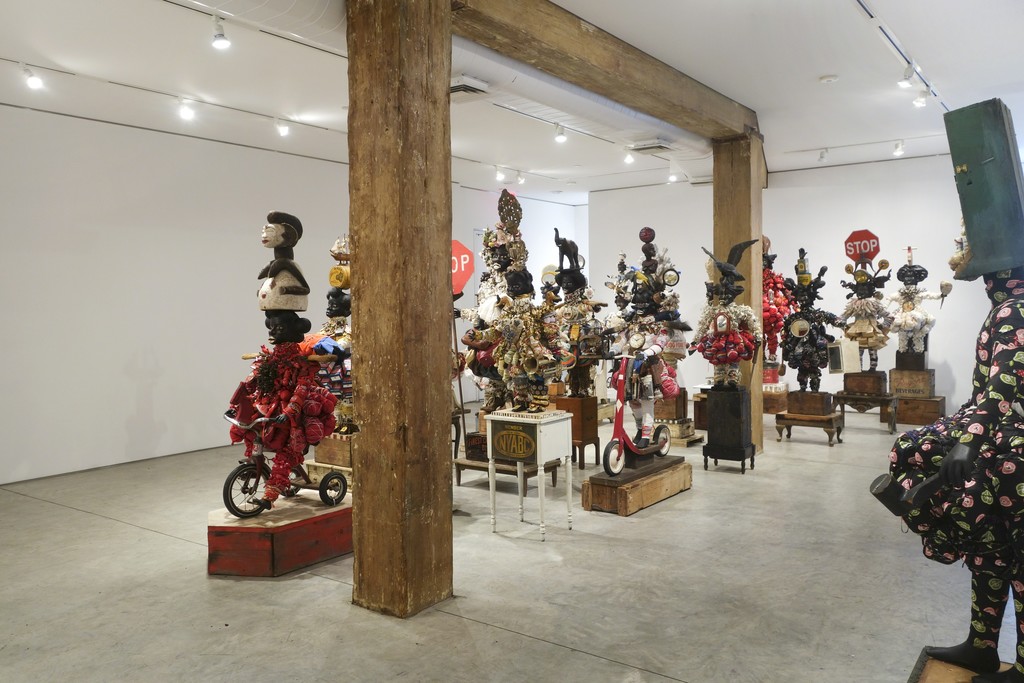 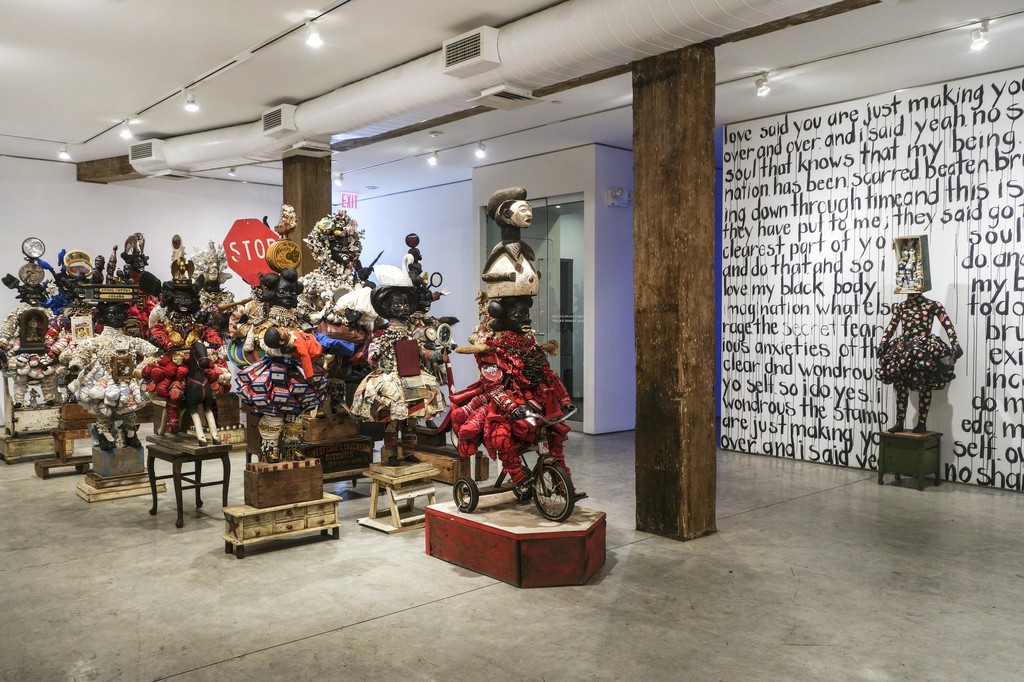 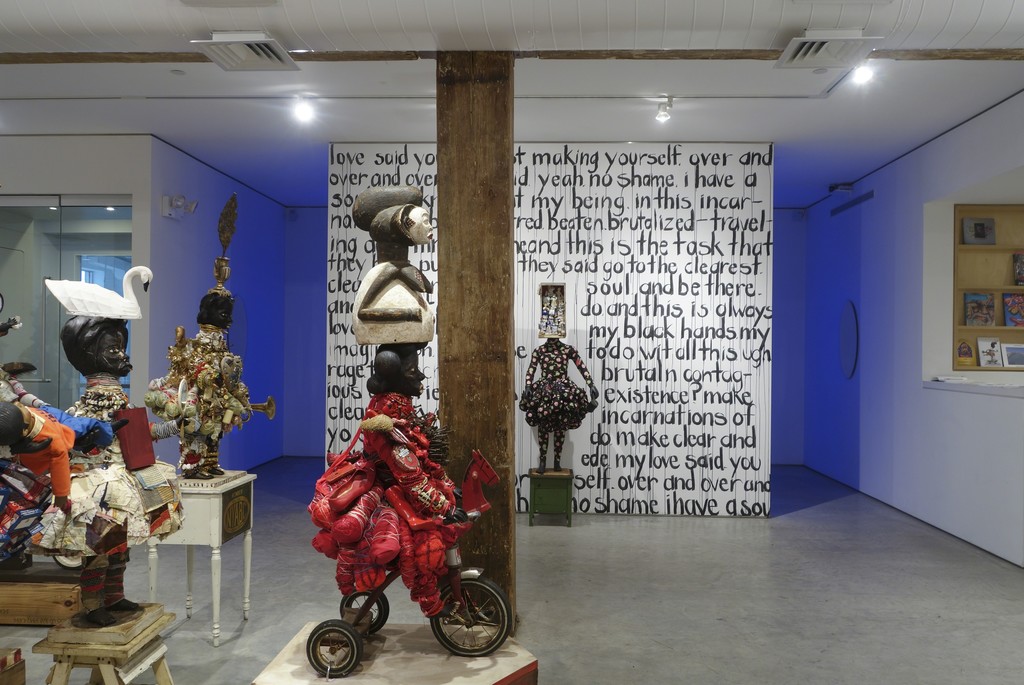 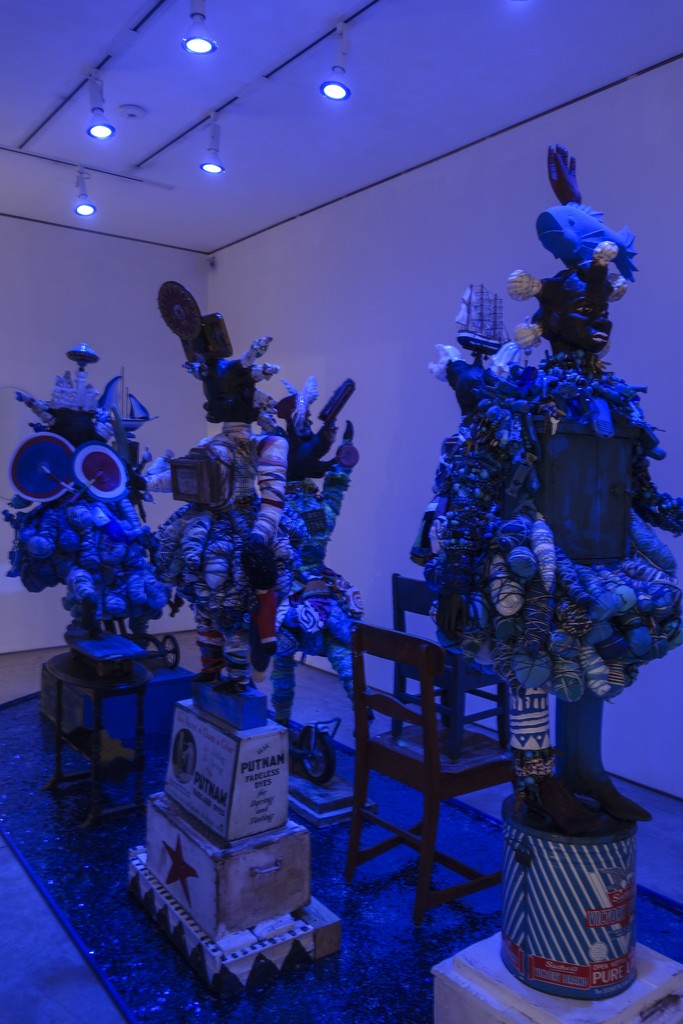 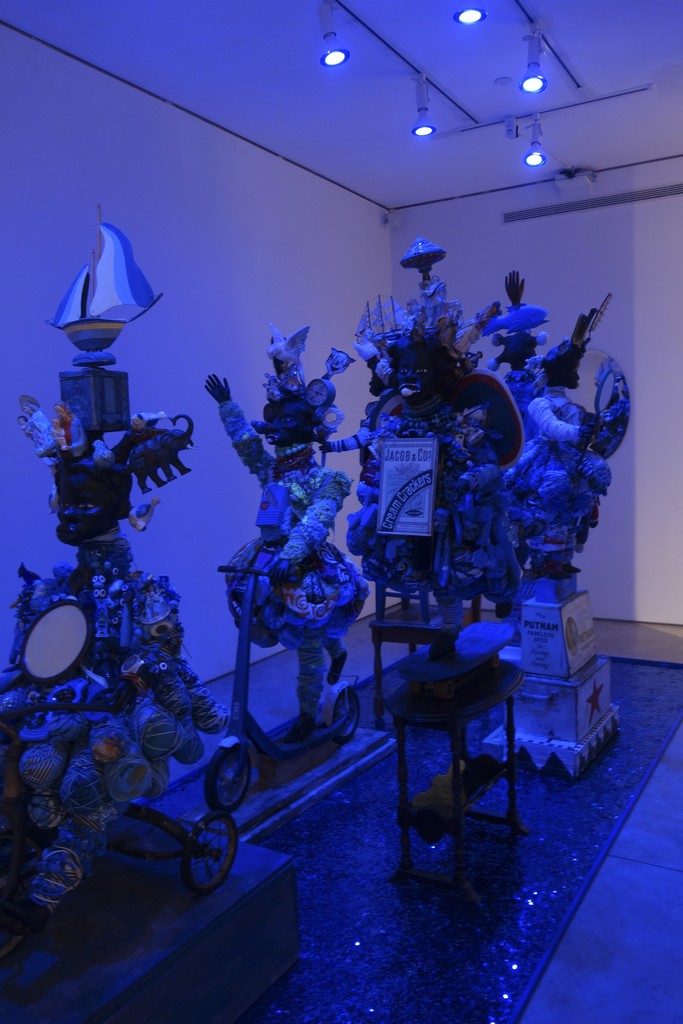 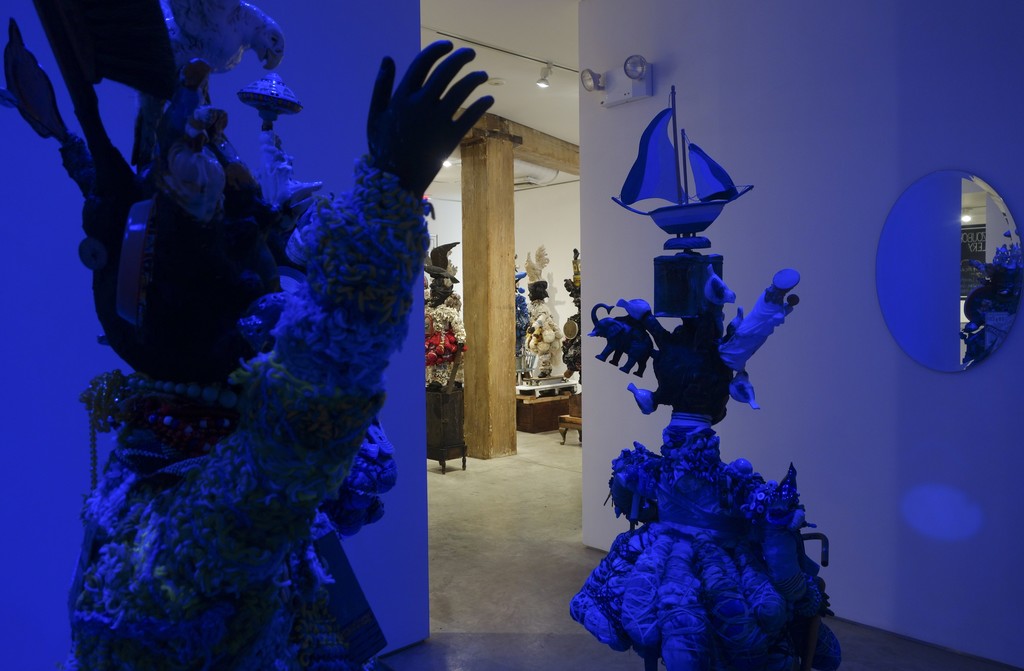 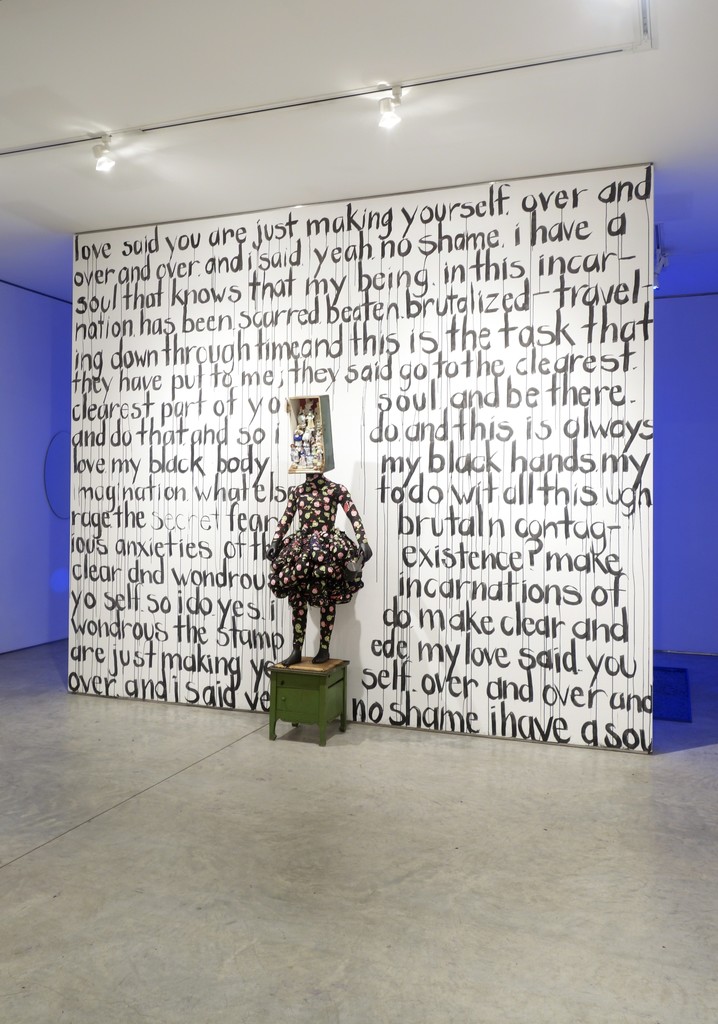 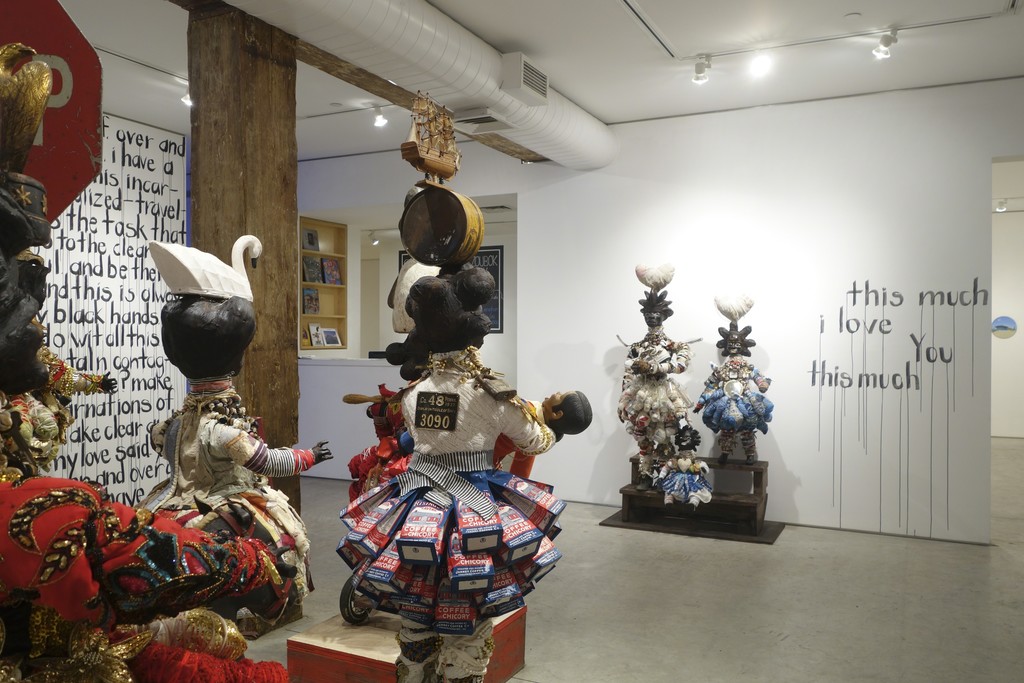 FOR IMMEDIATE RELEASE:
Vanessa German: i am armed. i am an army.

Pavel Zoubok Gallery is proud to present i am armed. i am an army., an exhibition of new work by artist, poet and performer Vanessa German. The exhibition features twenty-nine of German's signature mixed-media power figures originally conceived for her recent MATRIX exhibition i come to do a violence to the lie at the Wadsworth Atheneum Museum of Art.

Inspired by Emperor Qin Shi Huang's legion of terra-cotta warriors, chariots and horses from the third century BCE, German’s sculptures stand in formation as “an army of healers, an army of weepers, an army of protectors,” as she describes them. Referencing this new body of work, Frank Mitchell, Executive Director of The Amistad Center for Art & Culture writes:

In a season of lies—political, cultural, historical, migration and trade related—Vanessa German’s Power Figures, these diasporically, charmed culture warriors imbued with the wit and wisdom of generations, rise up in struggle. Seeing them installed we are drawn into the struggle; no matter why we’ve come, we are all now in a battle against the lies.

Vanessa German's work is rooted in spirituality and ritual, most notably the central African tradition of nkisi nkondi or minkisi figures, characterized by protrusions of nails signifying awakening and healing. With the steady rise of the Black Lives Matter movement and a national epidemic and conversation about police violence against people of color, German's work as a citizen artist (a term she often employs to describe her practice) and activist reflects an increased sense of urgency and agency. Her figures confront gun violence, police brutality and systematic racism head-on through the accretion of signs and surfaces. Above all, German believes in the transformative power of love and art to heal a community. In her own words she writes:

I grieve and I create. I reach out to my human family and I make it my business to FEEL, to HEAR, to WITNESS, and to continue on in my life and in my creativity, as I find the truest love and the truest healing in the active act of Making Art and being with Art, and Seeing and being inspired. I believe in the power of art, and I believe in the power of Love, and I do not necessarily have to distinguish between the two.

In Endurance Is A Love Story, the central mother figure is adorned with a richly encrusted bonnet of porcelain flowers and birds, a stark contrast to the heavy weight of her voluminous skirt of worn leather purses. She stands proudly atop three weathered wooden crates, advertising the "Finest Cakes, Crackers and Biscuits." In one arm she holds a doll (her female child), limp yet reaching for her mother’s blouse, with the other she holds a large red STOP sign. Along with her legion of sisters, daughters, mothers and aunties, she calls us to action, drawing on a rich tradition of story telling and preservation as an act of resistance.

Vanessa German is a multi-disciplinary artist based in Pittsburgh, Pennsylvania. She is the founder of Love Front Porch and the ARThouse, a community arts initiative for the children of her historic Homewood neighborhood. Her work is in private and public collections including Crystal Bridges Museum of American Art, The Progressive Art Collection, David C. Driskell Center for the Study of the Visual Arts and Culture of African Americans and the African Diaspora, Snite Museum of Art, among others. German’s fine art work has been exhibited widely, most recently at Spelman College Museum of Fine Art, Atlanta, GA; the Wadsworth Atheneum Museum of Art, Hartford, CT; the Studio Museum, Harlem, NY; the Ringling Museum of Art, Sarasota, FL; and in the traveling exhibition State of The Art: Discovering American Art Now, which originated at the Crystal Bridges Museum of American Art, Bentonville, AR. Her work has been featured on CBS Sunday Morning, NPR’s All Things Considered and in The Huffington Post, O Magazine and Essence Magazine. She is the recipient of the 2015 Louis Comfort Tiffany Foundation Grant. This is her third exhibition at Pavel Zoubok Gallery.