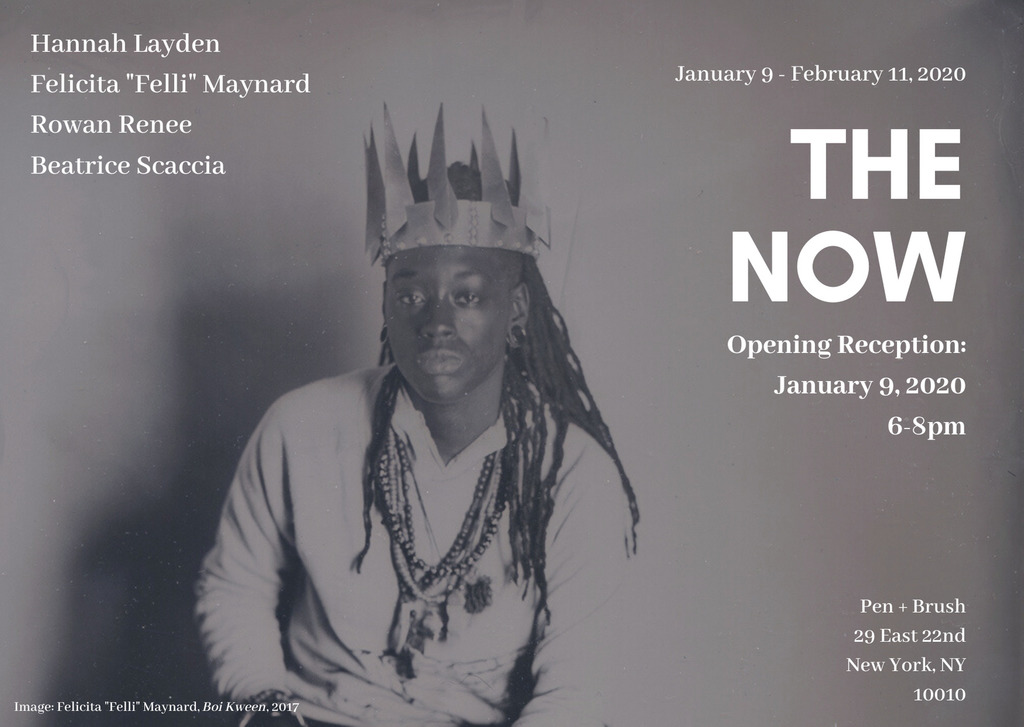 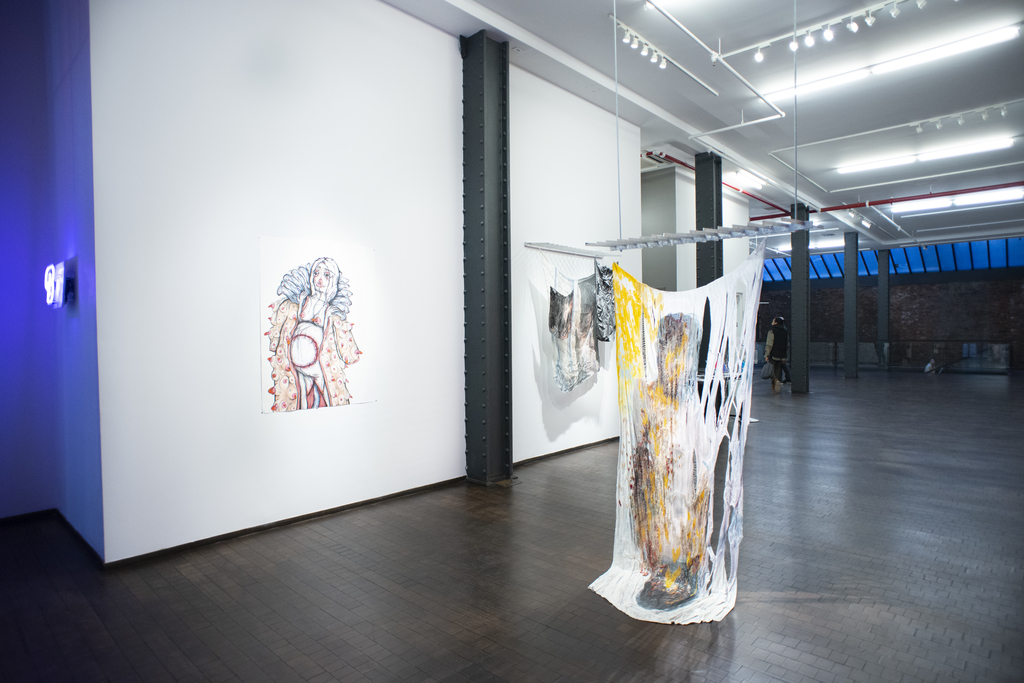 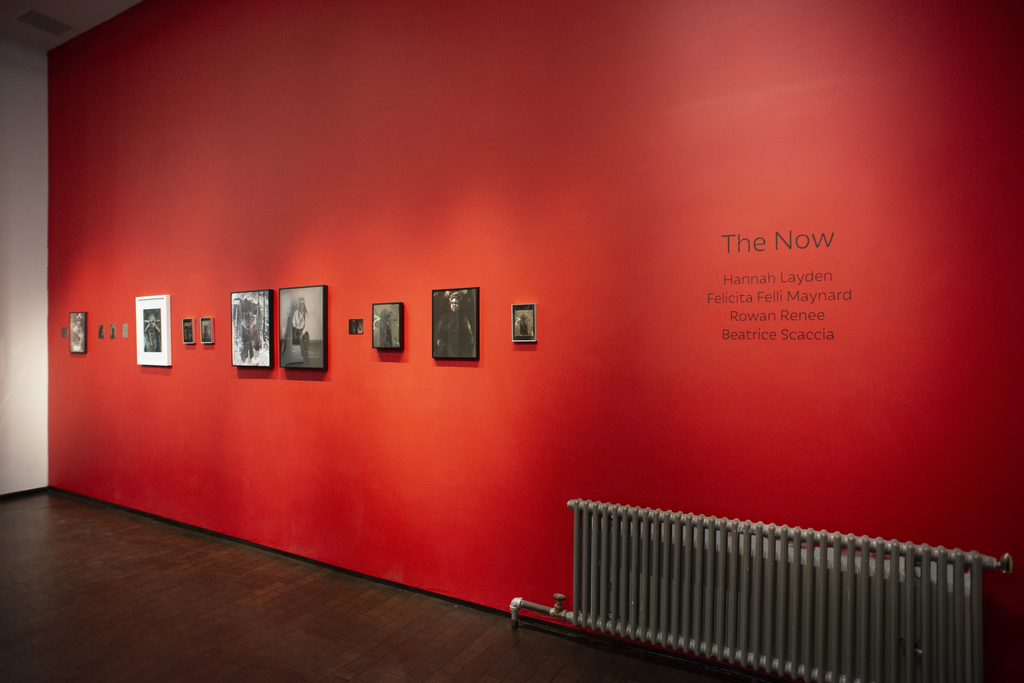 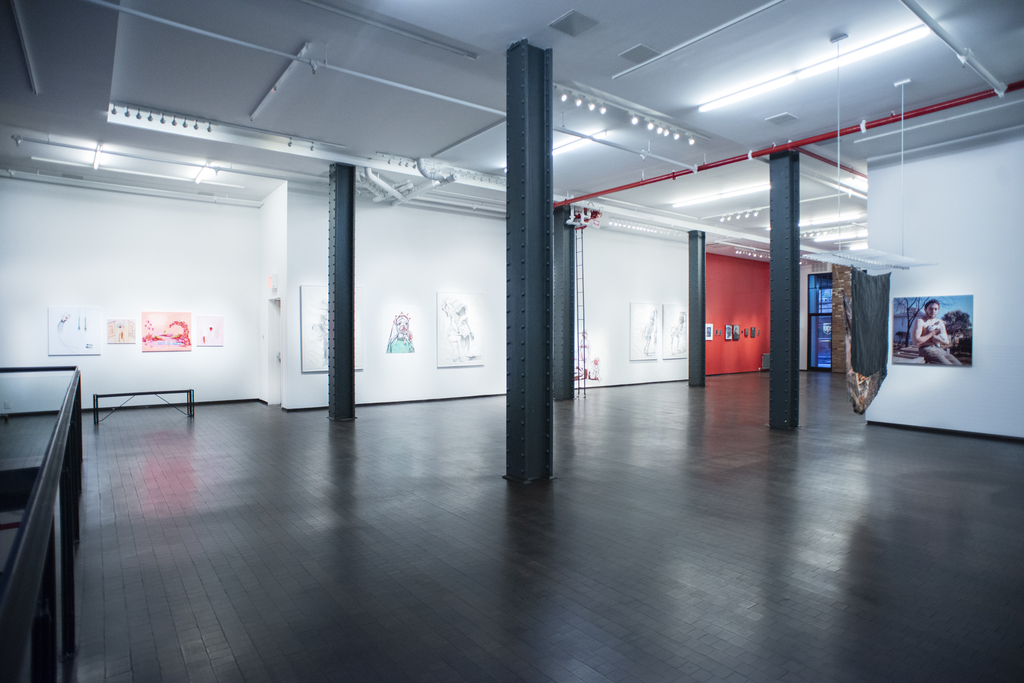 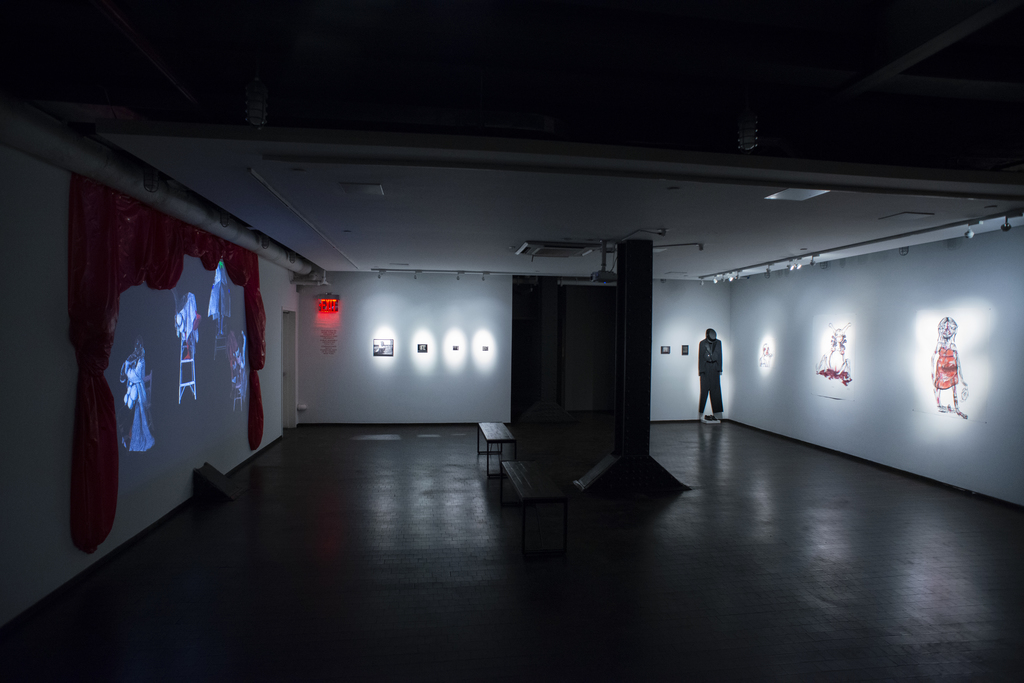 Pen + Brush is pleased to present our first exhibition of 2020, The Now, featuring artists Hannah Layden, Felicita Maynard, Rowan Renee, and Beatrice Scaccia. These four artists are creating work that tells of a universal sense of urgency in the search for identity. Works included in this exhibition confront and intervene with contemporary societal understanding of what it means to be human, woman, queer, disabled, and finally, what it means to be Other. Exactly who is Other? Can we find a shared empathy, a collective understanding, an intimate rather than superficial commonality?

Hannah Layden is a New York based artist who has exhibited work throughout the United States. Layden studied Printmaking and Painting at the University of Wisconsin-Madison and received a Master of Fine Arts degree in Printmaking from Pratt Institute in 2012, since then the artist has been consistently included in exhibitions throughout the New York metropolitan area. Layden’s work to date is a raw—and sometimes gut wrenching—journey into what it means to be a disabled woman occupying an erratic and inherited Other human body. Layden describes this creative process, saying: “I imagine the figures I create have found a way to leave our broken world and exist elsewhere. They build their own utopia because one was never given to us. They are tired of our rights being diminished, our dignity being trampled on, and our names being ‘other’. They don’t want our existence to be an act of resistance or a teaching moment anymore. Until I find this place, I create.”

While the foundation for this work stems from personal experiences, Layden depicts a universal truth: that we as humans deal with problems of the body, the flesh, and the innards. The artist’s large-scale figurative pastel drawings express the significance of Otherness, seeking to jar rather than sensationalize. Vulnerability, giving way to visceral emotion, is carried through Layden’s body of work to her most recent paintings, which depart from the floating white background of her pastel figures, and often include three-dimensional elements, such as clay or string, as well as drawings.

Felicita Maynard lives and works in New York and holds a Bachelor of Fine Arts from Brooklyn College and is the recipient of numerous awards and residencies including the New York Times Portfolio Review, 2018, BRIC Media Arts and Smack Mellon. Maynard describes their own work by saying, “I create work to further understand myself and my ancestors.” Through wet plate and film photographs, Maynard creates work that tells, or retells, the story of another time, challenging long misrepresented histories. The resulting photographs depict a new history of lost eras where black bodies as well as genderqueer and gender fluid bodies are not just included, but given identities. Maynard states, “I am reimagining queer ancestors and honoring their lives through historical fantasy. Representation is important especially for queer descendants of the African diaspora.” The artist gives voice to hidden and untold histories that like of Florence Hines, a male impersonator working in the late 1890’s who was arguably the most famous drag king in her day.

Rowan Renee received a Bachelor of Fine Arts from Parsons School of Design and a Master of Fine Arts from the University of Michigan. Renee’s work has been exhibited, collected and published around the United States. The artist has recently received solo exhibitions at the Anchorage Museum of Art in Anchorage, Alaska, Aperture Foundation in New York, New York, and at Pioneer Works Center for Art and Innovation in Brooklyn, New York, to name a few. Renee uses photographic, printmaking, and sculptural techniques to create an art historically informed body of work that addresses issues of the self, ownership, and the representation of queer and feminine bodies. In their series, Together But Separate, the artist draws on a personal journey of a battle to reclaim one's own representation after a lengthy legal dispute with a former partner and collaborator, a copyright lawyer, over ownership and access to nude images of the artist’s own body that they co-authored. In the works exhibited at Pen + Brush, the artist reclaims these lost images, asserting the transformative power of artistic labor for experiences of sexual abjection. Renee remade the images by printing the low-resolution digital scans (all they were legally allowed to have) on chiffon fabric. These were dipped in beeswax, layered with encaustic pigment, then scraped, burned, incised and adorned. On this body of work, Renee states: “Hung from armatures that recall drying racks, I began to think of these image/objects as somewhere between trophy hides and dirty laundry.”

Beatrice Scaccia is a visual artist and writer living and working in New York City. Originally from Italy, Scaccia studied Fine Art at the Fine Art Academy in Rome, Writing at the Minimum Fax Editor in Rome, and the Holden School in Turin. Her visual works have been exhibited internationally and are part of important private and public collections around the world, including the Portland Museum of Art and the William Louis-Dreyfus Foundation. Scaccia’s drawings, paintings, and digital animations explore the absurdity of the human condition. Her archetypal characters are isolated within acts that occur between significant moments of intentional living; they symbolize, most universally, the monotony of the repetitive acts absurd functionality of life. The artist’s process of layering various media and tensions molds characters into being ¾ under their fabric cloaks which conceal the self ¾ essentially turning them into universal “players” stuck in the space of repetitious insanity on the stage of everyday life. The artist describes the figures in her work saying: “My characters are fluid beings that often remain genderless, faceless, and ageless with only their most genuine vulnerabilities visible.”