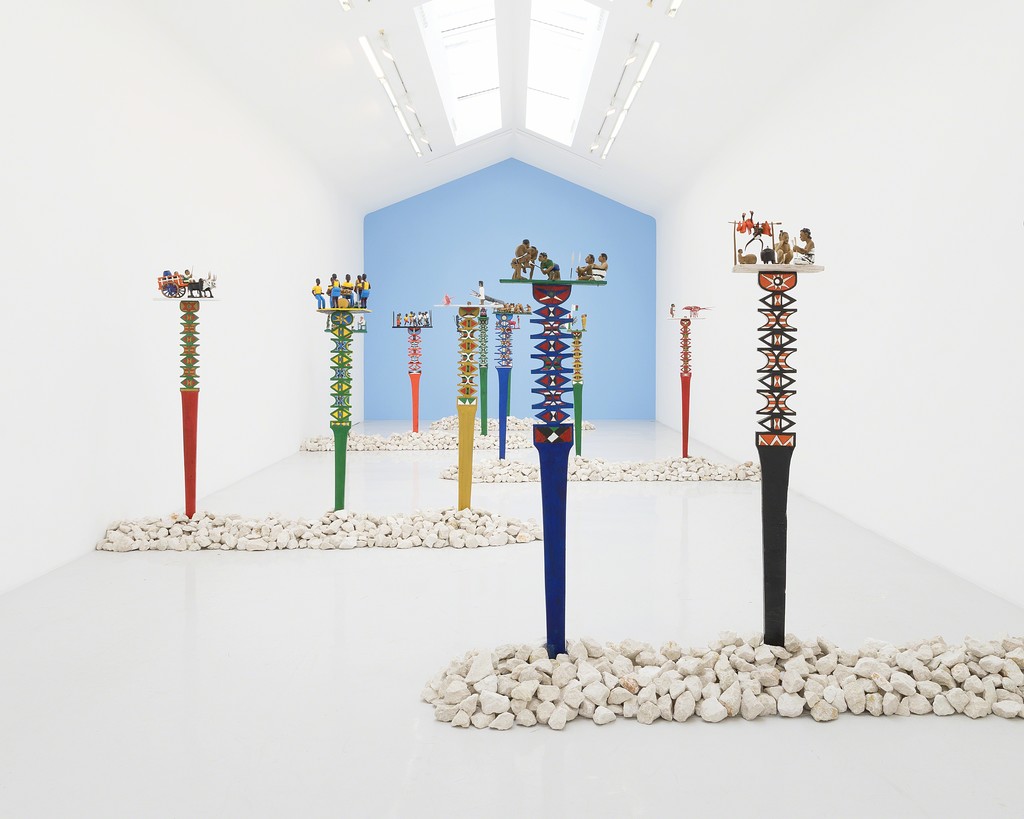 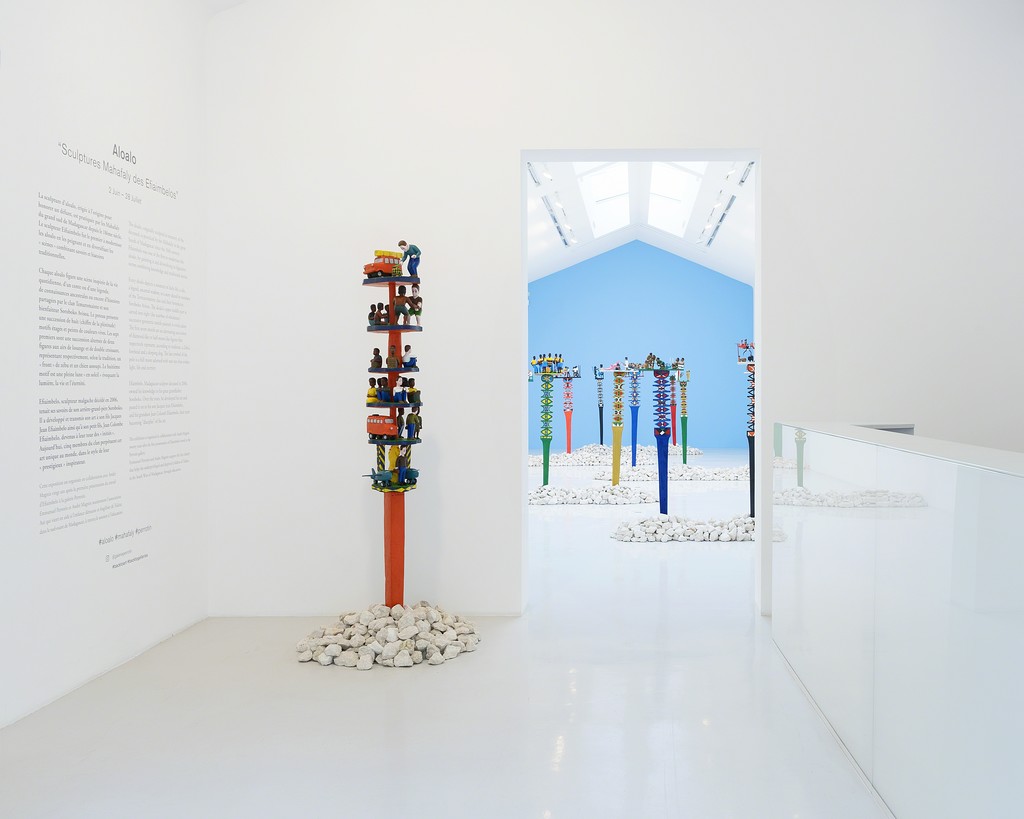 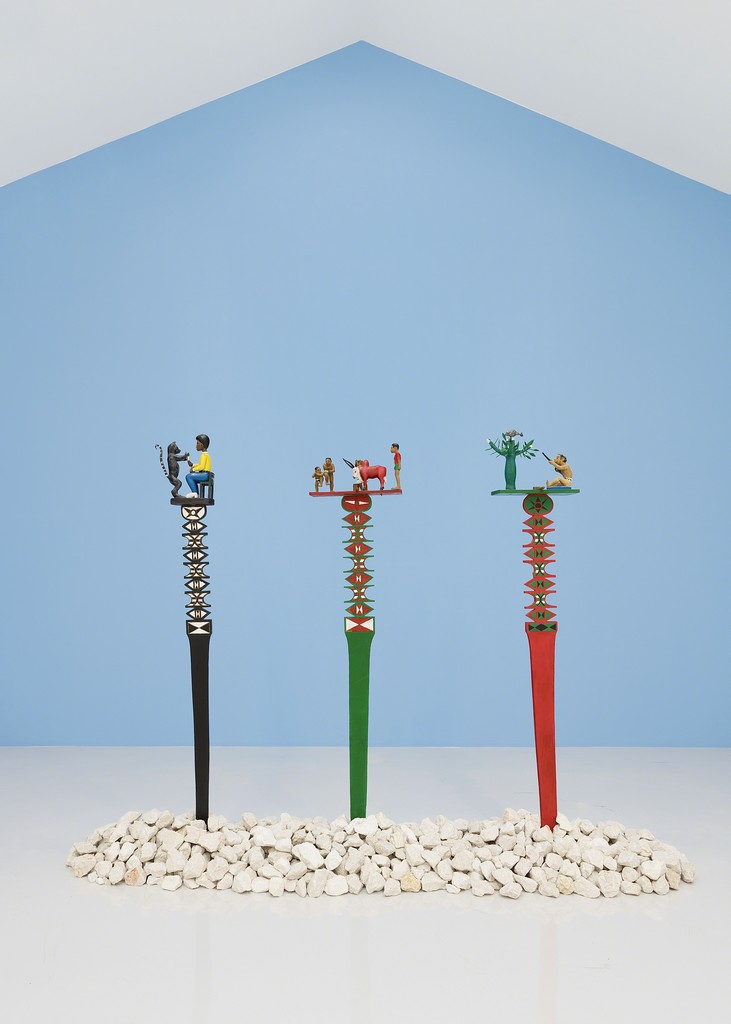 In collaboration with André Magnin, African art expert, Perrotin Paris and New York are very pleased to present an exhibition dedicated to the aloalo of Efiaimbelo and his disciples, twenty years after the first presentation of his work at the Perrotin gallery. Efiaimbelo, Madagascan sculptor deceased in 2006, owned his knowledge to his great grandfather Soroboko. Over the years, he developed his art and passed it on to his son Jacques Jean Efiaimbelo, and his grandson Jean Colomb Efiaimbelo, their turn becoming “disciples” of the art. Today, only five members of the clan perpetuate this unique practice in the same style as their distinguished inspirer.
Usually sculpted out of Mendorave, a very dense, rare and sacred wood exclusively cut and handled by sculptors; the aloalo is a vertical sculpture that reaches about 2 meters high (6.5 feet) divided in two distinct parts. The base of the sculpture is a pole. It’s upper middle part is carved into eight (the number of wholeness) successive geometric motifs painted in vivid colors. The first seven motifs are an alternating succession of diamond-like or half-moon-like figures that respectively represent, according to tradition, a Zebu’s forehead and a sleeping dog. The last symbol of the pole is a full moon adorned with sun rays that evokes light, life and eternity.
This pole is topped with a horizontal platter of varying dimensions, on which stands a figurative scene, sculpted in the round. Practiced by the Mahafaly in the great South of Madagascar since the 18th century, the aloalo is typically sculpted in memory of the deceased while celebrating the living with prestige. Efiaimbelo was one of the first to modernise the aloalo, by painting it and diversifying its figurative scenes combining knowledge and traditional stories. Every aloalo depicts a moment of daily life, a tale, a legend, ancestral wisdom, or a stories shared by members of the Termaromainte clan and their benefactor, Soroboko Avisoa.
To quote the anthropologist Paul Rabibisoa Rovoay: “The Mahafaly artist Efiaimbelo has placed the aloalo at the center of his art. In addition to contributing the endless inventiveness of his carvings to this art form, he has also played a significant part in the introduction of color and the revitalizing of themes. Reoccurring elements in Efiaimbelo’s aloalo are: a brightly colored (or black and white) ox known as a zebu, which expresses passion and prestige; a warrior, who conveys sovereignty; a couple of birds, which symbolize love and faithfulness; a policeman, who embodies the law and the strength of the new regime; a bush taxi, a motorcycle, and an airplane, which materialize travel, the city, progress, and technology.”

The descendants of Efiaimbelo, members of the Temaromainte clan live on the land of their Ancestors, amongst the “invisible”, in Androka. Their homes consist of a couple shacks protected by thorn trees and cactuses. The sculptures of Efiaimbelo were exhibited for the first time in 1989 in a show entitled
“Magiciens de la terre” at the Grande Halle de la Villette, in Paris. André Magnin’s pursuit of Efiaimbelo’s work, while spending time alongside the artist’s children, family and the Temaromainte clan that he became a member of, has allowed the exposure of these Aloalos; notably at the Galeries nationales du Grand Palais, Paris (2011); at the Guggenheim Museum, Bilbao (2007); at the Museum of Fine Art, Houston (2005); at the Grimaldi Forum (2005); at La Caixa foundation, Palma de Majorque; at the Palais de la Virreina in Barcelone
(1994-1995); at the Groningen Museum (1992); at the Centro de Arte Contemporáneo, Mexico (1992); at the Saatchi Gallery, London (1992), at the Centro Atlántico de Arte Moderno, Las Palmas de Gran Canaria (1991).

10% of the revenue of each sale will be donated to the Azé Charity www.aze-asso.org that supports the underprivileged and deprived children of Tuléar, in the South West of Madagascar, through education.