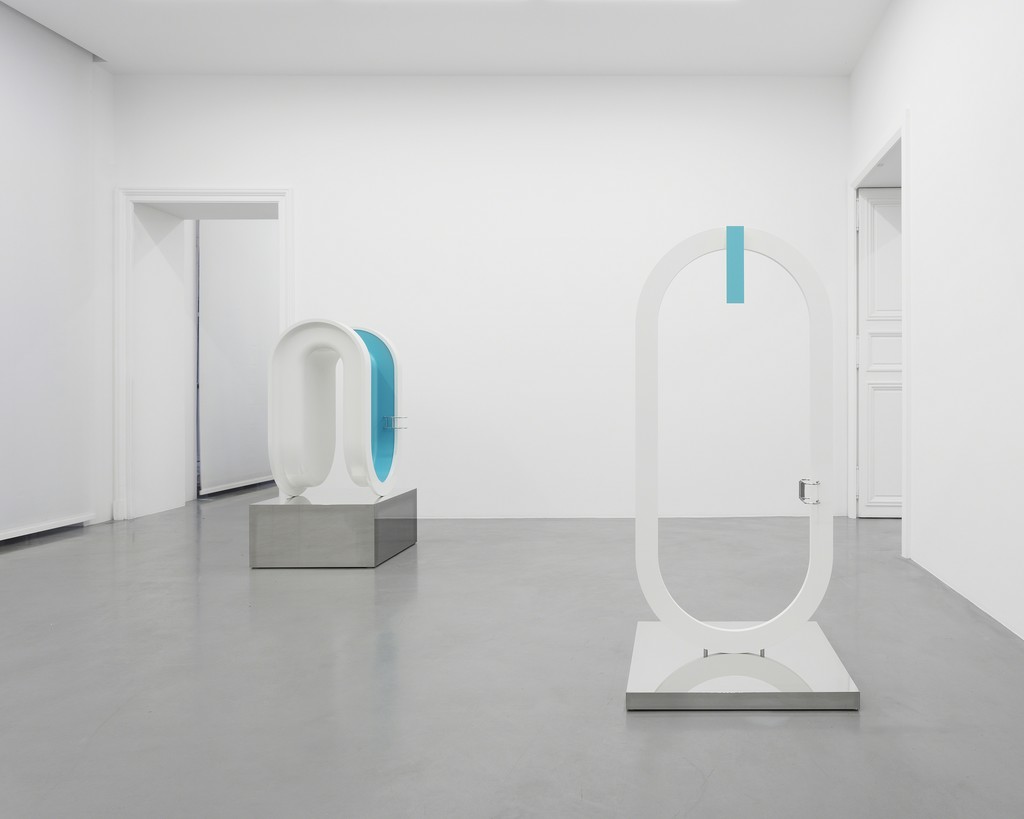 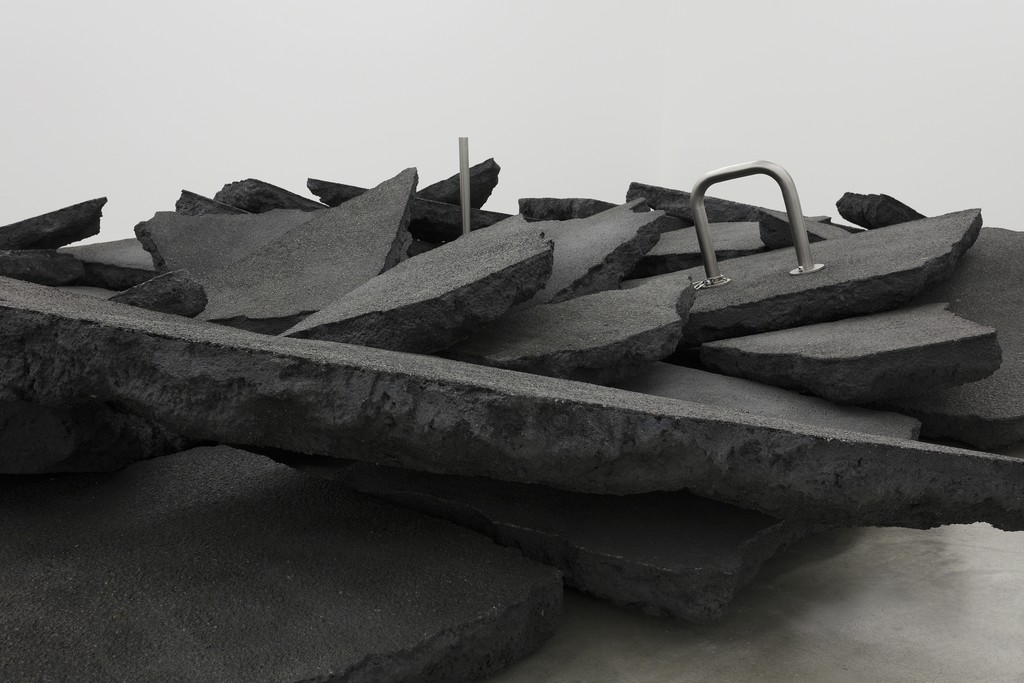 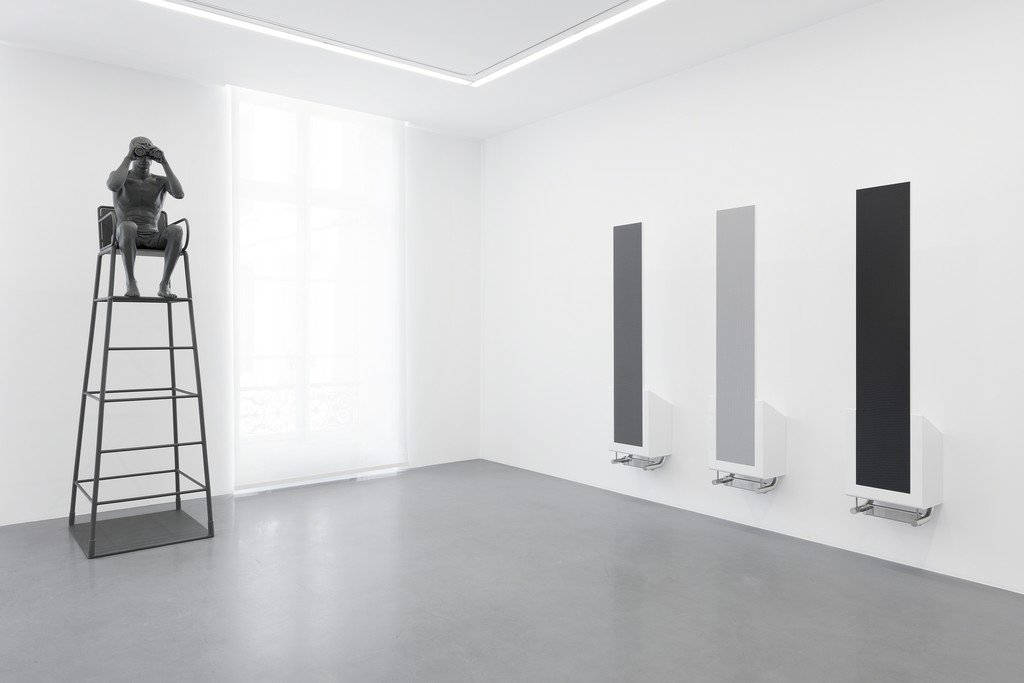 Perrotin Paris is pleased to announce an exhibition of new works by Elmgreen & Dragset, their first solo show in the city since the duo mounted a one-day installation at the Grand Palais in the fall of 2016. Michael Elmgreen and Ingar Dragset have worked together for more than twenty years, in a wide range of media. They create sculptures and installations that often echo early land art or Minimalist aesthetics, but engage with current, social, and existential issues surrounding both public space and everyday designs, and how these influence our behavior and mindsets. Their new body of sculptural works continues the artists’ ongoing interest in how we interact with spatial contexts.

In a new large-scale installation on the ground floor of the gallery, the entire room seems to have chewed up an expanse of urban streetscape. The massive, broken shards of asphalt stack up like the wreckage left in the wake of an arctic icebreaker and recall both Caspar David Friedrich’s The Sea of Ice (1824) and early land art projects by Michael Heizer and Richard Long. Their flat black surfaces are embedded here and there with the remnants of common street fixtures—the anchor pole for a lost traffic sign, twisted metal that may have once been a bike rack. These tools that once were used both to limit and to encourage social use of public space are now gone or at least useless. But what happened to them, who is to blame, and what comes next are questions left for the viewer to puzzle out.

Examined in strictly formal terms, this composition in black, grey, and silver has a unified beauty. Yet it is just as undeniable that viewers would feel inconvenienced if they encountered a similar—albeit probably less pristine—stack of debris on the street. Through the artists’ finely-tuned design decisions, we as viewers are able to perceive this image of dysfunctional public space in a dangerously pleasing manner. The installation not only raises questions about our shared public spaces, but also about the setting of the gallery itself, by displacing the broken pieces of the street and presenting them within the bourgeois grandeur of the private gallery room.
The contemporary white cube figures quite literally in the exhibition’s next work, a polished stainless steel street sign with no instructions or warnings to be found. Titled “Adaptation”, this new series of mirrored signage reflects the spatial context: instead of a warning or a direction printed on the sign board’s surface, the viewer will see the image of him- or herself in the space. The street sign is here reduced to pure form, which adapts to its surroundings rather than being a tool for controlling and directing.

On the second floor, several rectangular fragments of asphalt will be displayed, each framed and mounted on the wall as paintings or reliefs. Parts of what seem to be street markings in white paint can be discerned, however upon closer examination, it becomes apparent that the designs do not indicate any instructions at all, or that they signal unrealistic or even absurd directions. A circle appears on one piece, for example, whereas on another, two parallel lines begin to arch away from each other, making the symbols less like the traffic rules of the road and more like geometric abstractions. By isolating and exhibiting these fragments, the artists draw attention to and subtly alter some of the most common visual aspects of public infrastructure that are usually designed purely to communicate law and order.

In the other upstairs rooms, works from three ongoing series find new meanings while manipulating formal elements that have been in the artists’ repertoire for two decades. In the first room, an oval bar complete with stools and beer taps harkens back to Queer Bar/Powerless Structures, Fig. 21, from 1998. This appears to be in fact a Minimalist designer’s evocation of a bar, its pristine white surfaces marred by the chrome fittings that tell us this geometric sculpture might serve a real-world function. The humor of this incongruous juxtaposition is elevated to absurdity when the viewer realizes that the bar stools are trapped and inaccessible inside the closed loop, while the taps can only be accessed from the outside, creating a configuration that repudiates the structure’s defining raison d’être.

This negation of the essential purpose of everyday objects is at the heart of the “Powerless Structures” series, which the artists began in 1997, with the installation of a diving board jutting out through a window overlooking the sea at the Louisiana Museum of Modern Art in Humlebæk, Denmark. Since then diving boards and swimming pools have been among the duo’s most revisited tropes.

In the following room, three artworks made of diving boards will be mounted vertically: one standing alone, another showing a pair hanging side by side, and the third featuring a trio displayed together. The unusual orientation renders the objects useless, but more significantly it aligns the colorful planes with the tradition of Western abstraction. Standing before these, the viewer’s mind might drift to Daniel Buren’s striped canvases or the Minimalist totems of Anne Truitt. At the same time, the work featuring two boards—from the artists’
“Couple” series—might recall Felix Gonzalez-Torres’s pairings of everyday household objects like wall clocks meant as markers for same-sex couples. Knowing that those works inspired several sculptures incorporating “doubled geometry” that were first pursued by Elmgreen & Dragset when the two were themselves romantic as well as artistic partners, one can view the expansion of this metaphor to include the single and triple board works as a poignant acknowledgement of life’s many possible paths.

As with the diving boards, the three human-size swimming pool sculptures in the next room might on first impression simply remind gallery visitors of previous acclaimed large-scale pieces by Elmgreen & Dragset—Van Gogh’s Ear, the nearly 10-meter-high ear-shaped structure installed at New York’s Rockefeller Center in 2016, or perhaps the final resting place of Mr. B, the mysterious collector seen floating face-down in his swimming pool at the artists’ exhibition at the Danish and Nordic pavilions at the 2009 Venice Biennale. Even at a smaller human scale, these works masterfully evoke diverse and sometimes contradictory thoughts and feelings: lazy days and leisure time at the pool or conspicuous wealth and the will to tame nature, places to lose one’s cares or objects to covet, danger or joy. The three sculptures are at once recognizable as images of swimming pools, but their shapes also hint at the history of Modernist sculpture. This ability to call forth questions and stories without resolving them lies at the heart of all the pieces in this exhibition.