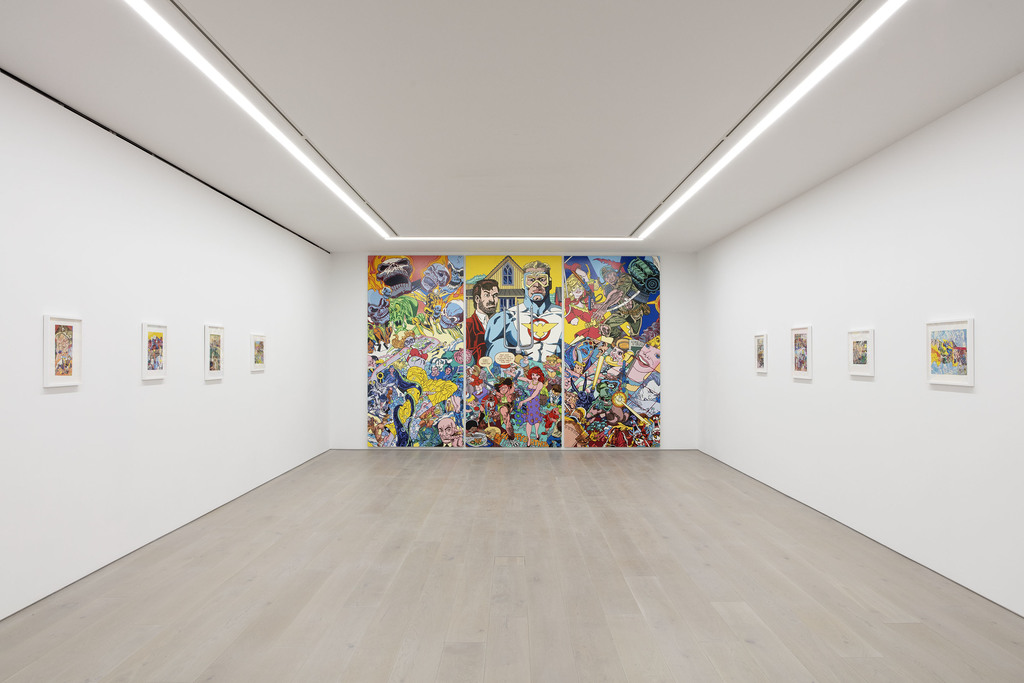 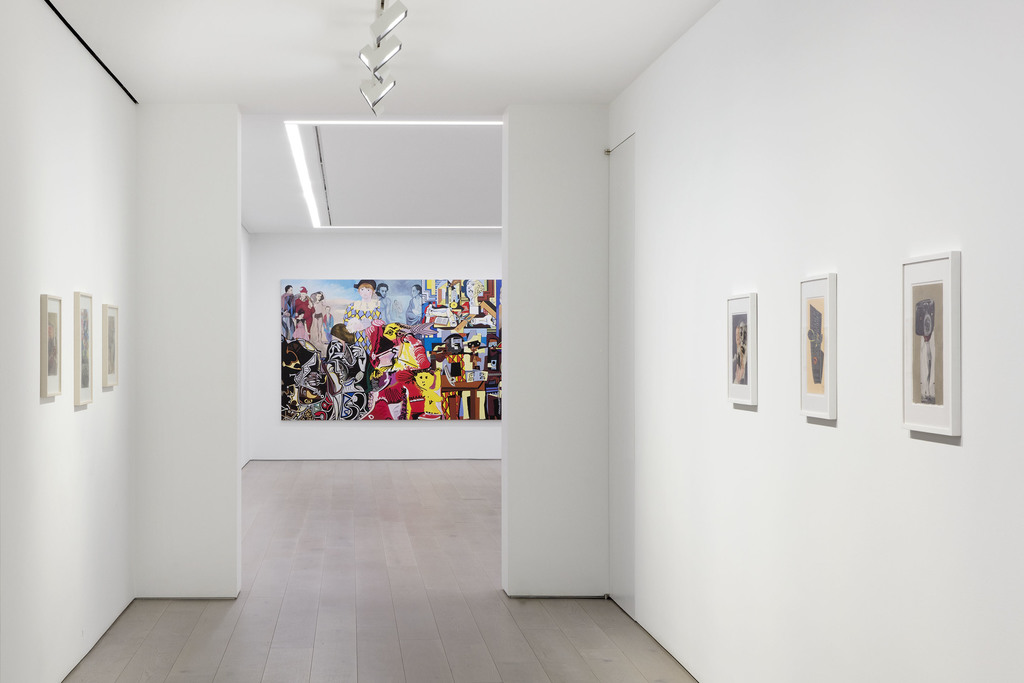 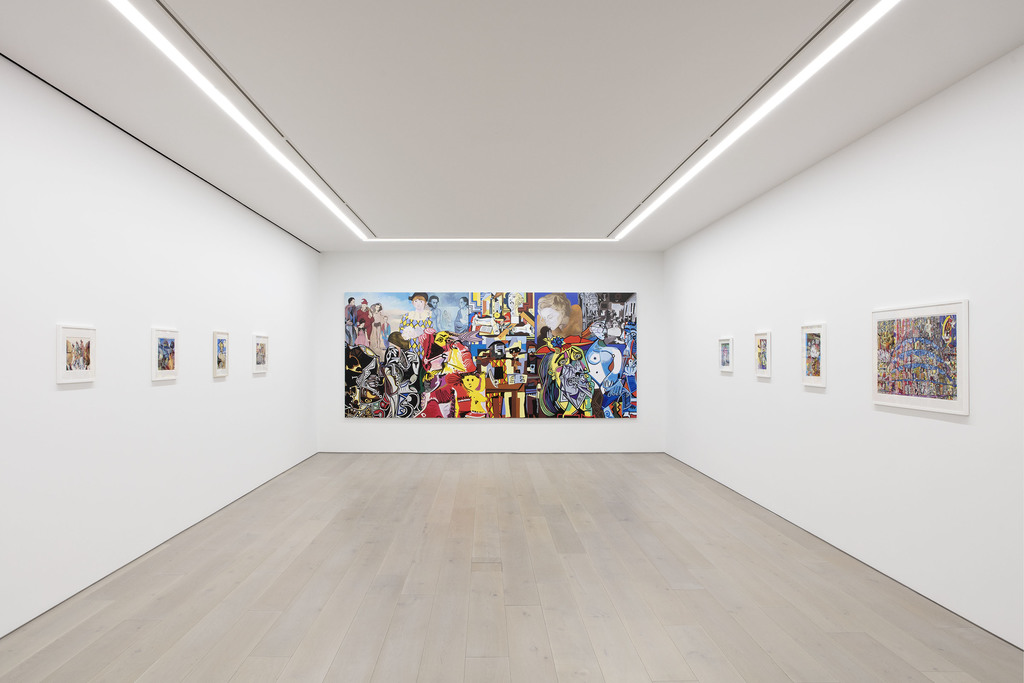 Presenting works by the world famous Icelandic artist Erró from the late 1950s through to the current decade, this exhibition offers a full survey of the artist’s titanic career, particularly his commitment to collage as a process and essential antecedent to his celebrated signature, and singular, paintings.

As evidenced by the artist’s inclusion in important recent international survey exhibitions, including The World Goes Pop (Tate Modern) and International Pop (Walker Art Center, et. al. 2015), Erró’s art has often been contextualized as part of an international generation of Pop artists, who incorporated icons of mass culture into their art to move away from midcentury abstraction and toward cultural meditation and critique. Often affecting the bombastic enthusiasm and stimulation overload of advertising as the dominant mode of his own work, Erró boldly inserted his art into the emergent circuits and iconographies of television, film, advertising, comics, and other inexhaustible sources of popular imagery.

In his collages, Erró’s cuts (and the distinctions between his source images that they mark) remain palpable and legible to the naked eye. However, his paintings distill these important disjunctions into one continuous, though visually riotous surface. The artist smoothly combines disparate canvases and art historical references in his works, and yet, no material scars remain. In this commitment to total synthesis, everything is translated into a hand-painted mark and thus uniform surface. Erró’s paintings work hard to reverse an otherwise frightening trend toward cultural entropy. They mend social division at the level of material encodings.

Stylistically and conceptually, Erró’s works anticipate the company of postmodernists, painterly semioticians like David Salle and Julia Wachtel. As the exhibition at hand shows, Erró has long invested in the reinvigoration of the classical, European tradition of painting on canvas, particularly its relationship to cultural allegory and the grandeur of large-scale history and landscape painting. Meanwhile, Erró’s paintings are always uniquely predicated on collage studies, a definitively modernist technique most famously associated with the synthetic Cubism of Pablo Picasso.

Erró’s art has long sought a globalist synthesis of culture and its antimonies. It assumed a transnational frame of reference given the artist’s frequent travel early on and his alignment with a new generation of artists committed to figurative painting as a means of sociopolitical critique. In particular, he was inspired after a trip to New York in the 1960’s where he forged important relationships with renowned Pop artists including Robert Rauschenberg, James Rosenquist and Andy Warhol. “For Erró, travel has always been a constitutive element of his creativity, and he established a transnational perspective in his art long before the emergence of globalization in today’s sense,” writes Max Hollein, Director of the Metropolitan Museum of Art.

Travel beyond Europe in the 1960s, particularly to New York, Moscow, and Cuba, exposed the artist to both sides of the Cold War, especially its propaganda and its insistent, bombastically righteous tone of address, a theme increasingly reflected by and disrupted in his own works. His works are populated by fantastically elastic political cartoon characters from all corners of the globe reflect the artist’s travel to Afghanistan, India, Thailand, Singapore, Hong, Kong, Indonesia, and Japan—and a concomitant critique of the nefarious, patriarchal neo-imperialist military presence that effectively curtailed the postcolonial autonomy of these regions.

In their radical combinations of distinct, and often heavily-freighted, cultural geographies, Erró’s collages especially here echo the precedent of Martha Rosler’s well-known series, House Beautiful: Bringing the World Home, c. 1967-72, a series of collages that intercut imagery of the Vietnam War and other American imperial interventions with domestic shots from various lifestyle magazines, including Pat Nixon at the White House. In fact, Erró’s remix of mass-manufactured imagery, especially representations of women, and their relationship to larger superstructures of patriarchal power, often formally harken back to various feminist interlocuters; as in Long Face Lola Meca-Make-Up series, 1959-1960, which brings to mind the fiercely elegant cut-ups of German Dada collagist Hannah Höch.