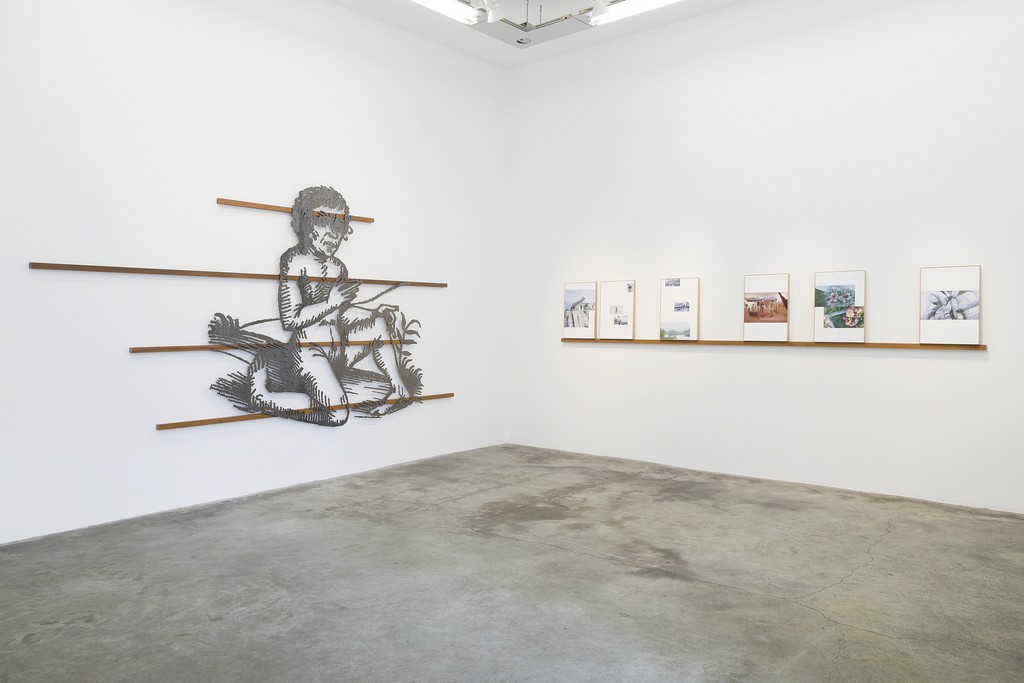 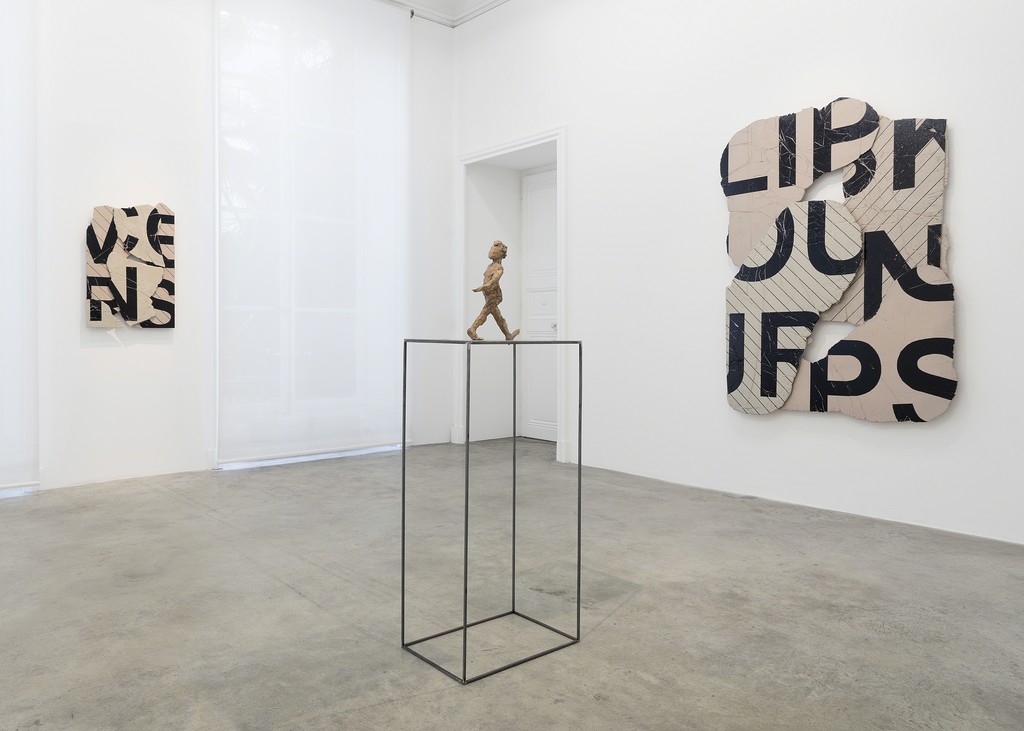 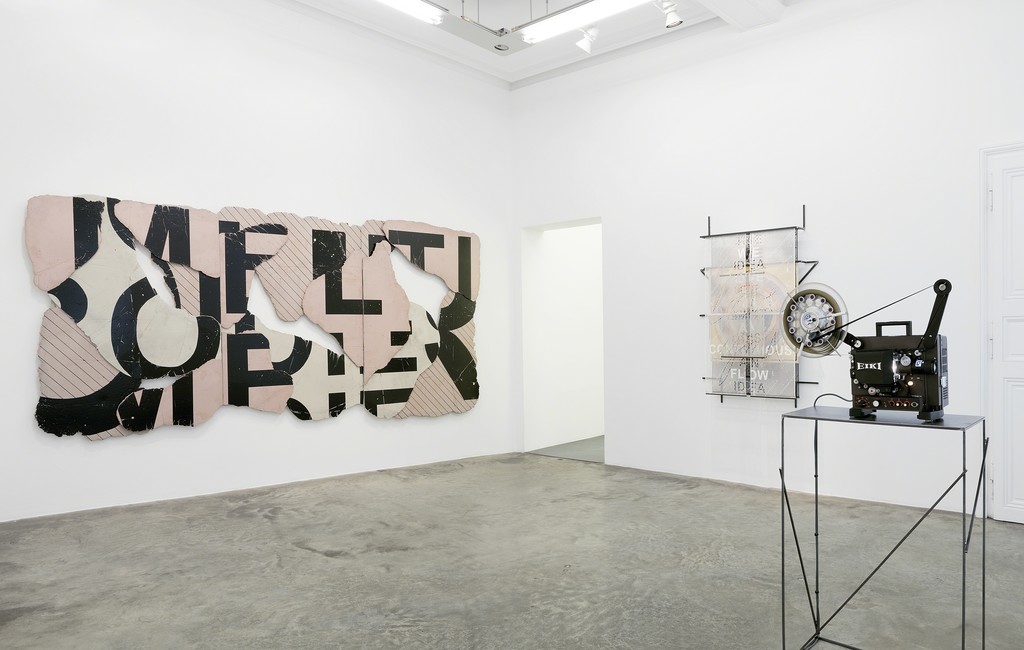 This new exhibition by Iván Argote at Perrotin Paris is
conceived like an essay composed of sculptures, texts,
photographs, illustrations and films in which the artist proposes
a poetic, sociological and political discussion on our
relationship with history and our relationship with “the other”.
To stimulate our reflection, Argote transports us to two cities
that are diametrically opposite to one another: Neiva in
Colombia and Palembang in Indonesia. Exact antipodes are a
rare geographical relationship that only six pairs of cities share
in the world. The artist produced a film on the subject (“As far
as we could get”) that weaves links between the two places
and the people who live there, creating a voice that gently but
firmly criticizes hegemonic historical narratives. The film
revolves around the main axis of decentralizing voice and gaze.
The film appears and disappears throughout the exhibition
space as the chapters unfold, thus playing with the lighting and
a massive installation that covers a large section of the gallery
floor (“About a place”). Dozens of pink concrete slabs,
produced one by one in the artist’s studio, are engraved with
poems and thoughts. They question the status of the space in
which they are arranged, in a way that is at once intimate,
ethical and political. They are faced with the sometimescontradictory
complexity of a context like that of an exhibition
space or more generally a geographical position in the world.
Our relationship to the context has a meaning that we can
shape, criticize and debate.
Argote also uses the axis of antipodes to foster reflection on
the way we look at the other. He delves into History (“Setting
up a system”) to find the origin of the concept of antipode, i.e.
a scientific notion created by the first Greek geographers
around 300 BC. Its etymology is from the Greek “with opposite
feet”. The idea was transformed over the centuries, exposing
different notions of the concept itself. Argote shows us icons
(“L’idée de l’autre”) from “The Nuremberg
Chronicle”, a major encyclopedia published in 1493, in which
the inhabitants of antipodes are depicted with deformities,
sometimes literally with inverted feet. These icons are
compared and contrasted with photographs taken in the two
aforementioned cities and marked with drawings and
annotations portraying objects and situations that range from
the banal to the exceptional and the bizarre.
In “Fièrement différents”, Argote stages small bronze figures
with inverted feet that look at us with defiance and humor and
accompany us throughout the exhibition. The deformed image
of the other as it was shown in the Middle Ages shifts here to
an amusing and proud representation. The relationship with the
other has been a main focus of Argote’s work, from his early
creations of interventions and interactions with pedestrians or
commuters on public transport, to his recent public installations
such as “The other, me and the others”, a giant seesaw that
tips depending on the position and number of visitors.
In the series “Skin”, slogans interspersed among different
strata of cement create contact between bodily notions and
political thinking, in an almost erotic way. In such a way, Argote
evokes tenderness, the body and contact as a tool for
reflection, a theme also explored in public installations in
Cameroon (“Oui ma vie”), or the flyposting campaigns in
Colombia, Brazil and Mexico (“Somos Tiernos”), and more
recently in Paris (“Tendresse Radicale”).
Three small photographs from 1973 (turned a purplish hue),
taken from a personal family album, are spread around the
gallery. We see children demonstrating, accompanied by the
artist’s father who was a primary school teacher at the time, but
also taught them how to rebel. While these photographs
inspired a number of workshops that Argote has performed in
schools and art institutions since 2011, they also served as the
point of departure for his research on the history of the
Kodak Company.
His research resulted in the 16 mm film “Reddishblue
Memories ” produced in Colombia. There, Argote chose an
intimate setting in which to film his parents, who are still strong
political activists. Like a character, one of the photographs offers
an expression in the first person, telling stories about the
activism of the artist’s parents and, in parallel, the ideological
burden that drove Kodak to change its film-development system
during the Cold War.
This film, partially produced for an exhibition in Ukraine,
intertwines two voices: one in Spanish, the other in Ukrainian.
The voices speak about colors, political commitment and
ideological confrontations, while maintaining an affectionate
tone. We delve into the intimacy of family and sentimental
memories, to move on to historical and political matters with
depth and sometimes humor. This recurring cycle in Argote’s
work includes us as sensitive, emotional and political entities in
the explorations of our relationship with the other, time and location.