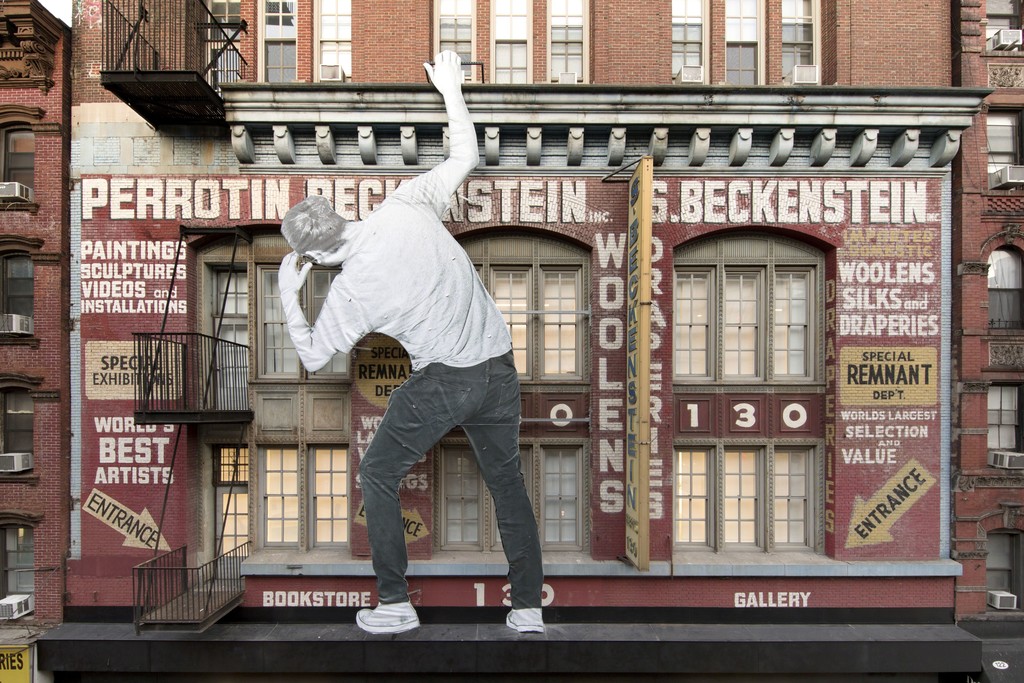 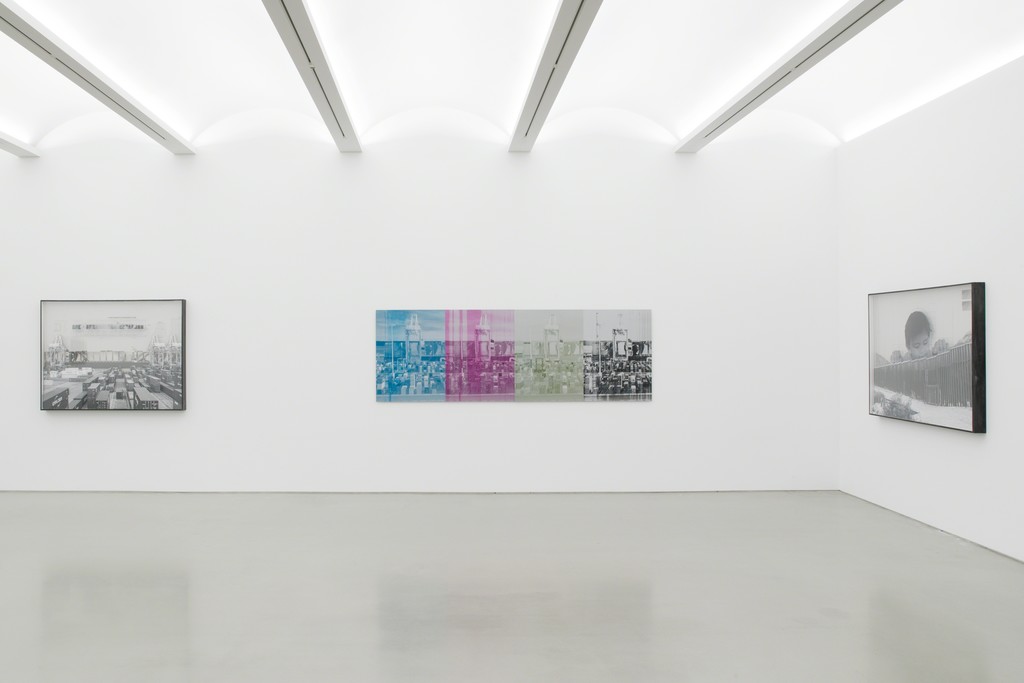 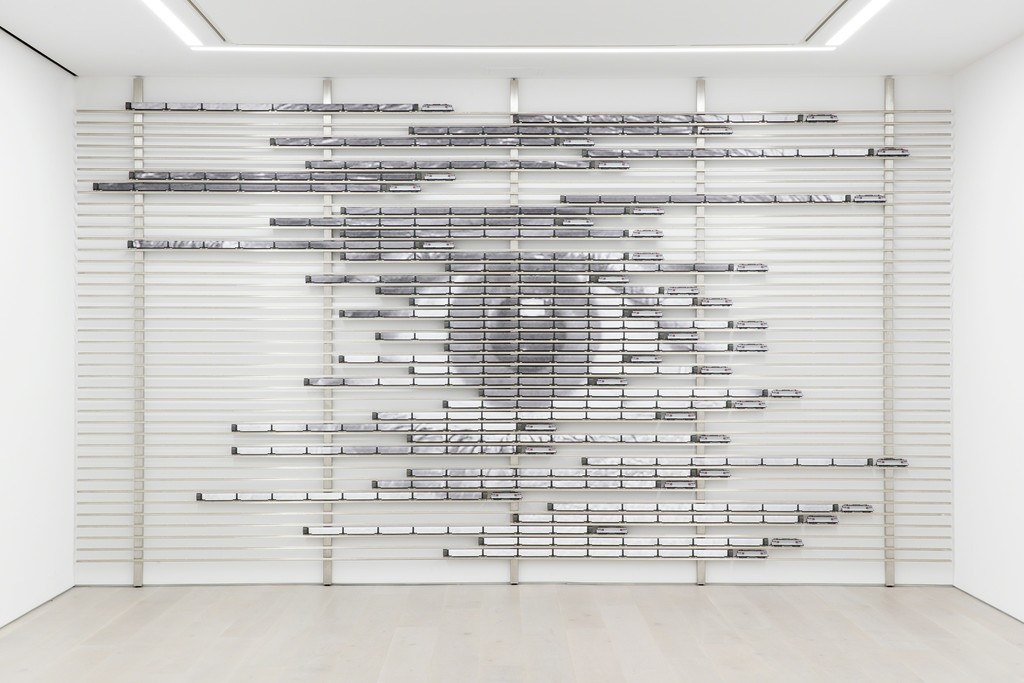 Most people have seen the work of the celebrated French artist JR, even if they don’t know it. His rooftop mural of a giant pair of engaging eyes is impossible to miss from the terraces of New York’s Whitney Museum of American Art, nearly 20 million viewers tuned in to watch U2 perform in front of this dynamic photo during the 2018 Grammy Awards and the 2018 Oscar-nominated documentary Faces Places, which JR co-directed with the legendary Agnès Varda, has been attracting rave reviews since its release last year.
Starting out as an artist on the streets of Paris when he was still a teen, JR rose to international acclaim when he won the coveted TED Prize for his socially active art in 2011. The innovative work that won him the prize partially came about through chance. Discovering an abandoned camera in one of the city’s Metro stations at age 17, he added photography to his creative talents when he began documenting his friends while they were tagging.
Employing the wheat pasting technique of street artists like Banksy, Shepard Fairey and Swoon, JR ambitiously started making “Sidewalk Gallery” exhibitions of his photographs, which soon grew larger-and-larger in scale. After self-publishing My Street Diary with photos of his art pals in 2005, JR was surprised to see his pasted pictures in news reports of riots in the Paris suburbs that he knew so well.
Wanting to rectify the unfair coverage of the neighborhood, JR photographed its young people, whom the media had been portrayed as riotous radicals, in more playful poses. He strategically posted his portraits in bourgeois areas of the city and on the walls of art centers, which made such an impact that he was soon invited to wrap the city hall of Paris with his imagery. It was then that JR began to believe that art could change the world.
Using the power of paper and glue, JR made the leap to the international stage in 2007, when he and a friend traveled to Israel and Palestine to document the conflict with his project Face 2 Face. Making close-up photographic caricatures of Israelis and Palestinians doing the same jobs—posing as barbers, lawyers and cooks—he pasted their jumbo portraits together on both sides of the wall to show that they were more alike than different.
As the media buzz around the artist grew, the opportunities to show his work and create new, community-based projects increased, too. Traveling to Brazil in 2008, JR inaugurated his Women Are Heroes project in the impoverished favelas of Rio de Janeiro by pasting the sides of houses and buildings with the faces of determined women in the gang controlled area.
Over the next two years, he took the project global by creating actions in Africa and Asia, while displaying his powerful pictures at a massive scale on walls, bridges and rooftops in Europe and the U.S. No one had ever seen public art at this level, or with such a noble purpose. Giving a voice to the powerless, getting face to face with them, JR digitally diced up his pictures to print in sections, which made them applicable to all kinds of surfaces—from the sides of trucks and buses, to the tops of moving trains.
JR also began his ongoing Wrinkles of the City project that same year. Photographing the elderly people who had witnessed the dramatic upheavals of their urban environments, JR wove their images into the fabric of the place. Pasting their jumbo likenesses on crumbling walls and industrial areas of such cities as Shanghai, Havana, and Los Angeles, he gave praise to the inhabitants who had survived tough times.
Upon winning the TED Prize, JR initiated Inside Out, a participatory art project that allows people to have their photo taken and then paste it to promote an idea, action or project that they support. Since its inception, more than 300,000 portraits have been pasted in 140 countries—with photo booths taking the project to unpredictable places.
In New York, Inside Out actions have occupied Times Square and The High Line, and in 2014 JR collaborated with the New York City Ballet to create life-size photos of the dancers and an enormous image of their bodies forming an eye. JR’s most celebrated NYC project, however, has to be his installation of haunting photographs of immigrants in an abandoned hospital on Ellis Island. The site also serves as the backdrop for JR’s moving film ELLIS, which stars and is narrated by Robert De Niro.
The issue of immigration was also on JR’s mind in 2017, when he constructed a billboard-sized portrait of a baby boy peering over the American border from Mexico. On the final day of the provocative installation, the artist threw a picnic on an extended tablecloth printed with his signature eyes that traversed both sides of the borderline—a symbol that the whole world was watching.
Although the artist has had nearly 60 solo shows in cultural capitals worldwide, New Yorkers have long anticipated a broad presentation of JR’s work, and with this exhibition at Perrotin New York, the wait is happily over.

Solo shows of JR’s work have been exhibited in galleries and museums worldwide, including The Rath Museum in Geneva, Tokyo’s Watari Museum, The Contemporary Art Museum in Dallas, The Contemporary Arts Center in Cincinnati, the Museum Frieder Burda in Baden-Baden, Germany, and the Power Station of Art in Shanghai. In 2014, he created a monumental installation that surrounded the drum of the Pantheon’s dome in Paris during its renovation, and in 2016, he staged an intervention on the Musée du Louvre’s famous glass pyramid. That same year, he showed an installation of model trains at the Château La Coste, in the South of France. This year, he will have a retrospective at the Maison Européenne de la Photographie in Paris.