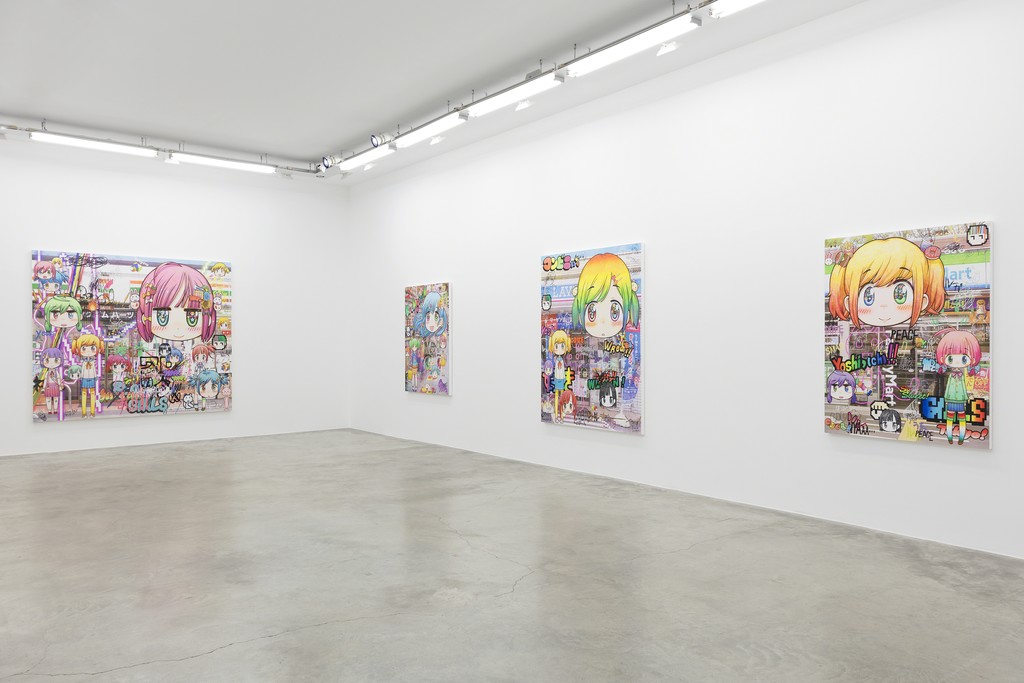 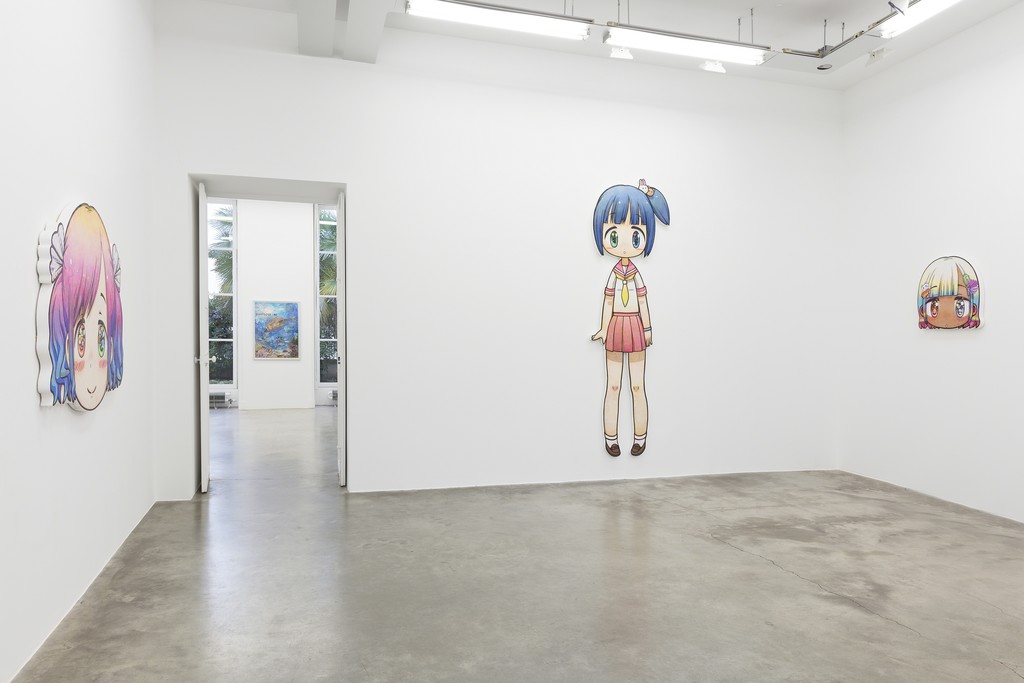 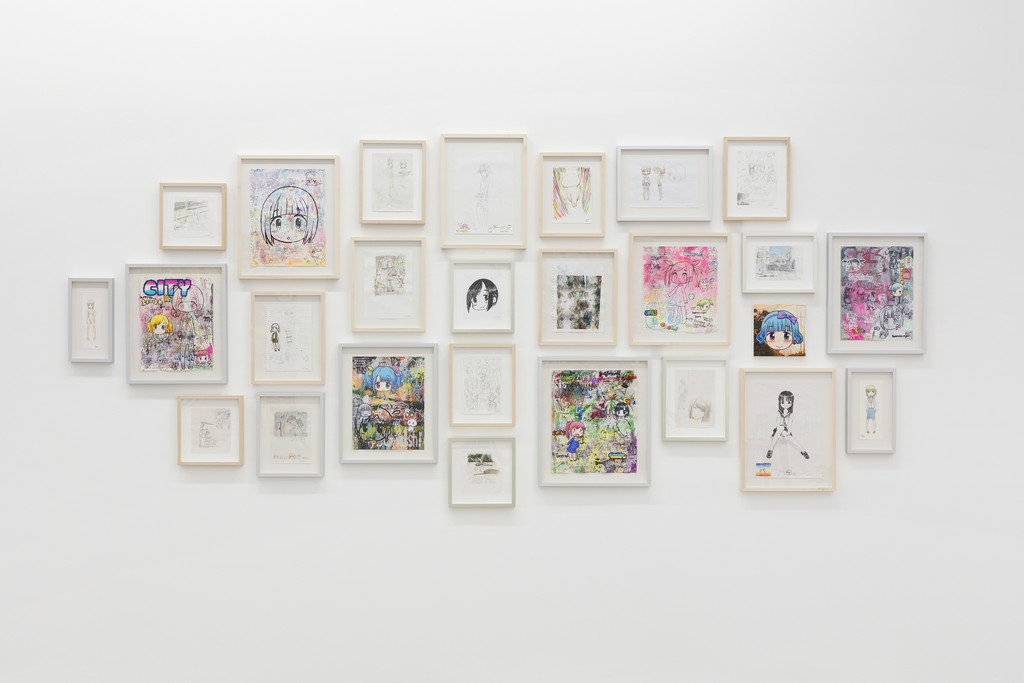 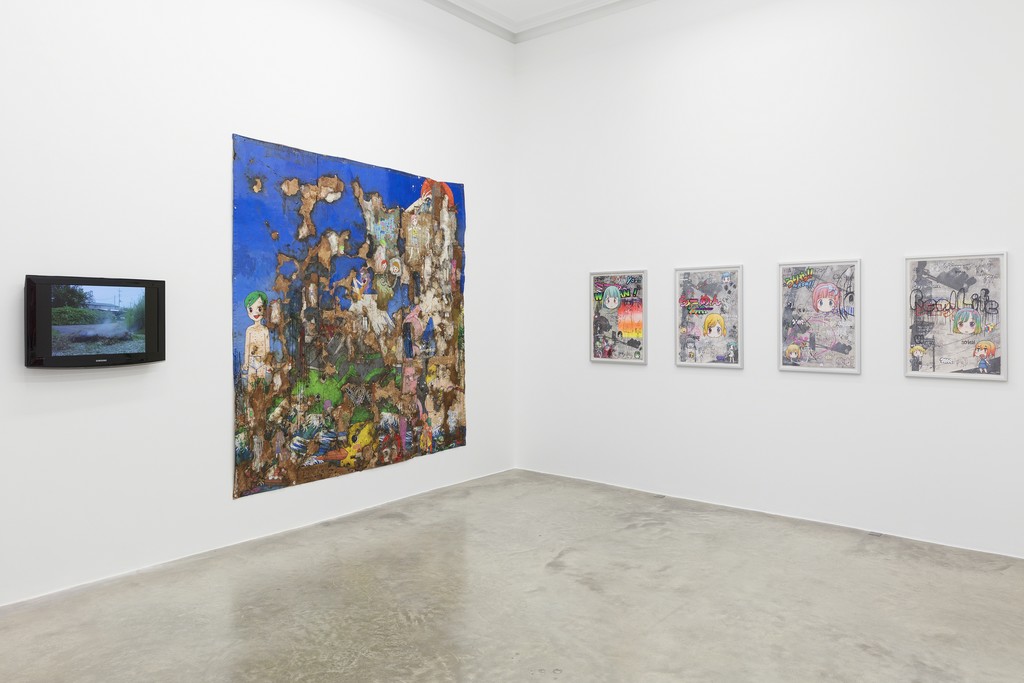 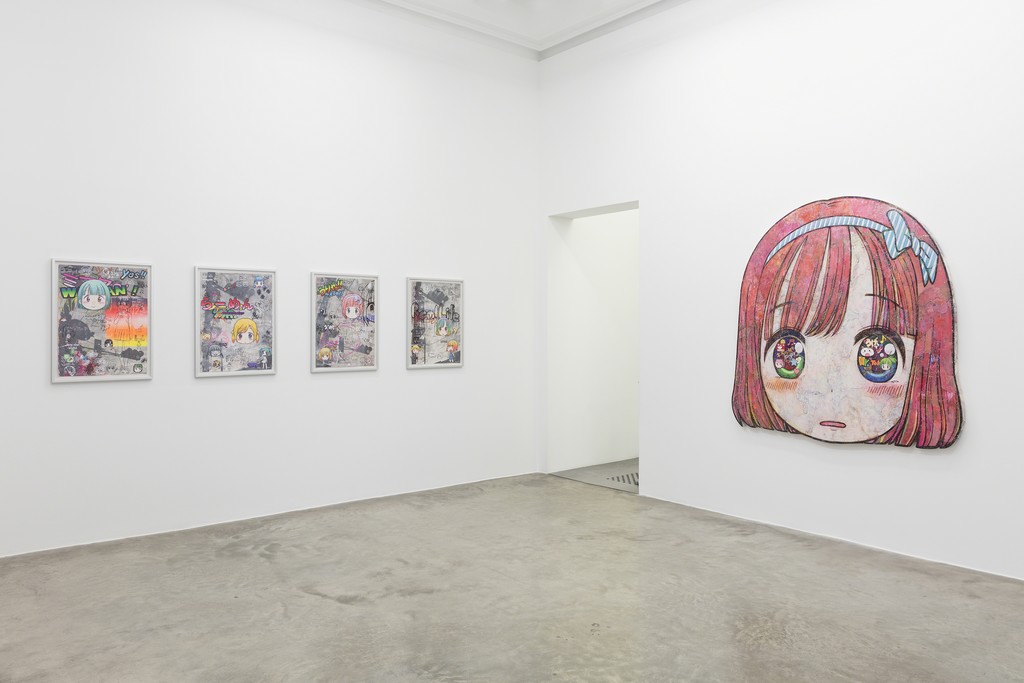 The city is intoxicating, overwhelming. It bays, it roars for our attention. The city is all-encompassing. It envelops, engulfs all that comes into its path, inhaling the grotesque and the beautiful, exhaling the phantasmagorical and mundane alike. The city is transgressive, invasive, infringing upon our physical boundaries, permeating us visually and sonically, assailing our skin and our bodily defences.
Mr.’s city, the city of Tokyo, the otaku neighbourhoods of Akihabara and Ikebukuro, is for him such a site. An interminable cacophony of words and images. A seductive fantasy of desire and dread. A space of street scribblings and graffiti, of conspicuous consumption and exhaustion. This is a land of the acerbically saccharine and the bitterly sweet, a land of rupture and flow, exuberance and estrangement. This is a terrain in which the cute and the terrifying, the kawaii and kowai, are as interchangeable as they are indeterminate, in which remedy and poison are always already interlinked.
Yet with all the exhilaration and danger this city proffers, with all its visual exhortations and aural appeals (Buchigiri! Hit me up! Dope! Beauty! Love!), in Mr.’s megalopolis, in his town, alienation abounds. Here the ceaseless stimuli serve not to diminish but increase the feeling of isolation, the intensity of sensations deepening atomisation, amplifying seclusion. Here the city dwellers sleepwalk into an impotent sadness, the bright lights creating a lack, the boundless goods a dense restlessness. Here the black bile seeps, sweeps through the town’s immersive illusions, the melancholy both advanced and concealed through this sensorial violence.
For the otaku culture that Mr. diligently, deftly, delicately renders, for the geeks and the gamers, the freaks and the fiends that his works calls forth, this melancholy is implicit – as visible in the sad, lost eyes of his characters (the eyes reflecting the hysteria of the city as spectacle), as through their always solitary, isolated depiction (both present and perpetually absent, both a part of and apart from the crowd). Yet it is Mr.’s ability to not just translate and portray otaku but to emerge from this underground society himself, to be otaku (as his name itself reveals through its characterless typicality), that gives his output its profound power: The intense devotion, fixation, infatuation of otaku – the mania emerging through the need to find a space of solace away from the instability and precarity of the contemporary world – is not just seen but felt in Mr.’s works. The intense passion, compulsion, obsession that the otaku possesses – the addiction reflecting a need to seek out the comfort, fulfilment, and innocence of childhood – is here demonstrated through Mr.’s fetishistic revelation of life through the eyes of the adherent themselves.
The fierce graphic vividness of Mr.’s new productions can hence be understood to play directly with (and against) the visual babel they reside within, the soiled and smudged backdrops, the scratched and scored canvases, competing with the glossy frenzy of the characters and objects scattered chaotically throughout. The figure(s) and their ground(s) hence disclose the distinct duality of Mr.’s inner and outer worlds. They disclose both the superficial and the psychological, the public and private, the two levels of the otaku subculture caught in their unending conflict. Mr.’s works thus portray the Manichean battle he, and each otaku, are forever set within; the darkness behind each smile, the invisible shadows that hide amidst each super-flat, super clean surface.
Mr.’s Melancholy Walk Around Town is hence not the wandering, the promenade of the famous flâneur – the sauntering, unhurried walk of this urban connoisseur – but rather that of the badaud, the figure whose sense of self is absorbed by spectacle and superficiality, the figure inebriated by the city lights, stupefied by its tumult. The images Mr. creates are thus both consolation and concealment, a diversion from the underlying emptiness yet so too a capitulation to the spellbinding, mesmerizing, hypnotizing nature of contemporary life. His lonely walks engulfed by consumer culture, his solitary strolls assailed by modern life. A melancholic essence making him a stranger to himself and to his city, a melancholic vision emergent from his spatial and perceptual environment alike.