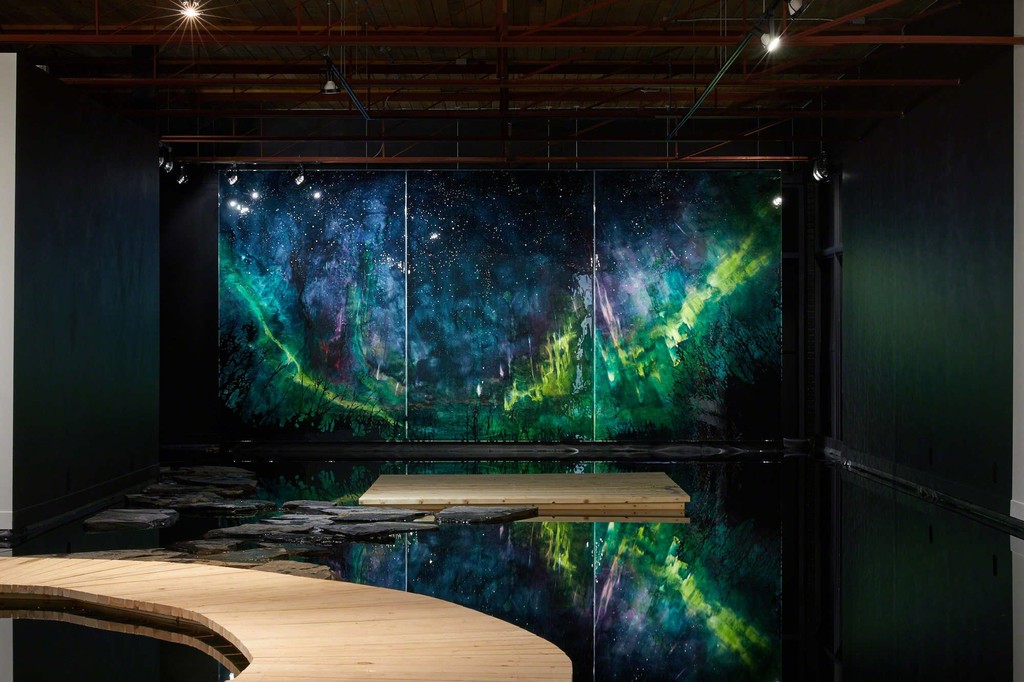 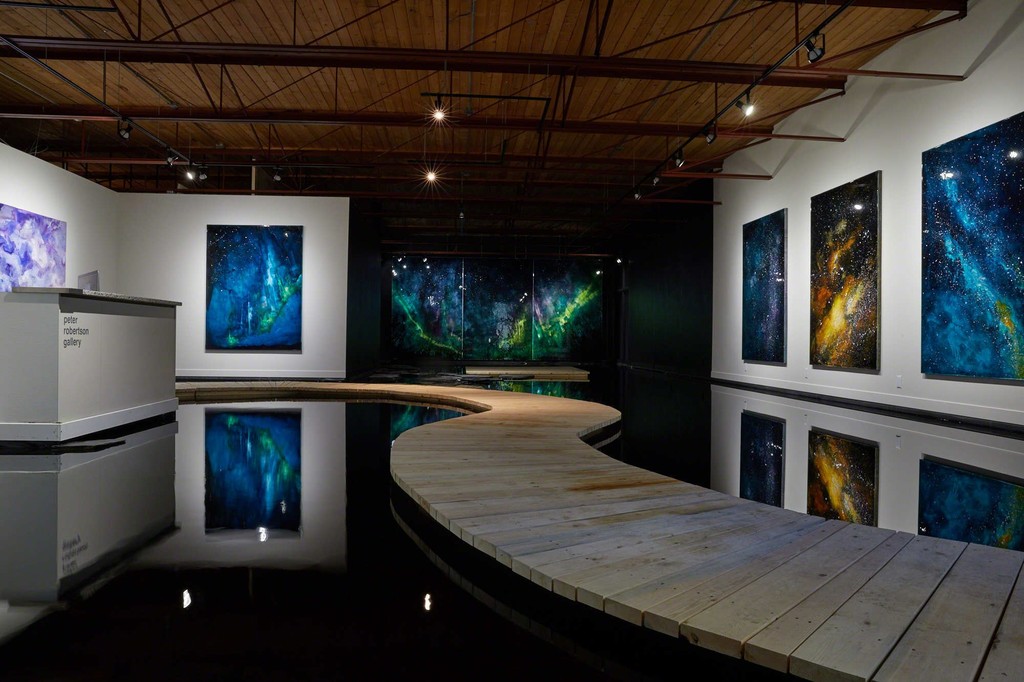 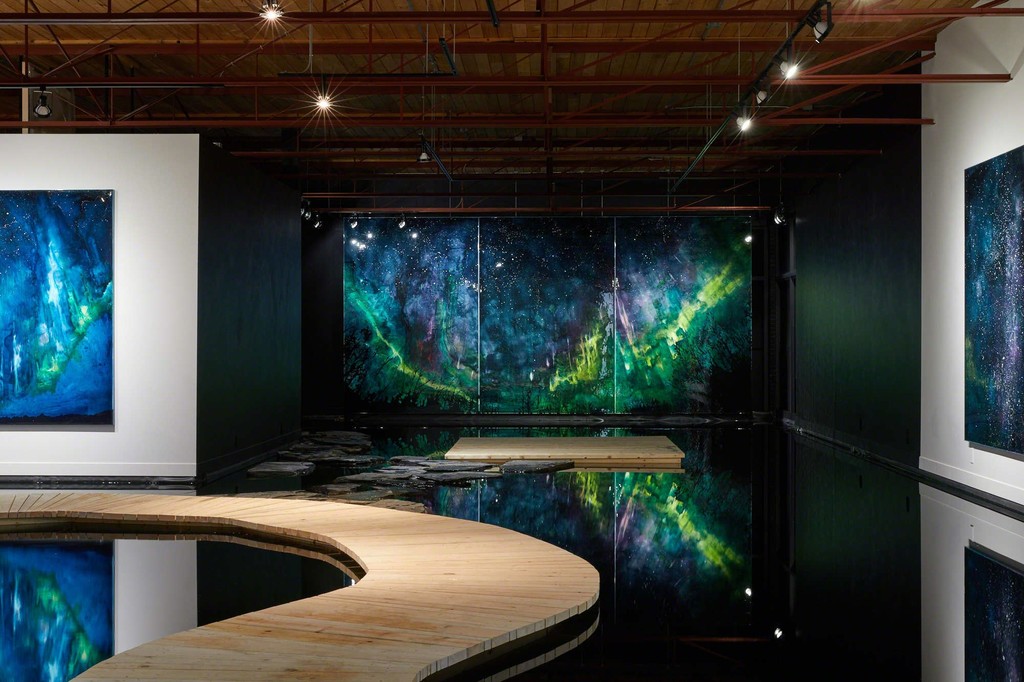 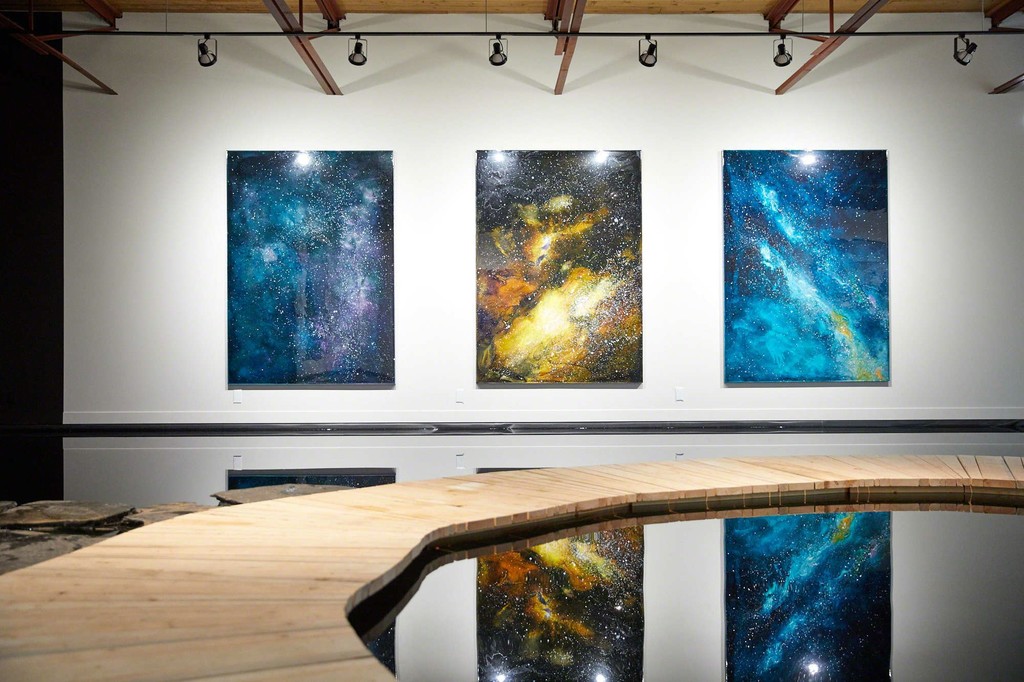 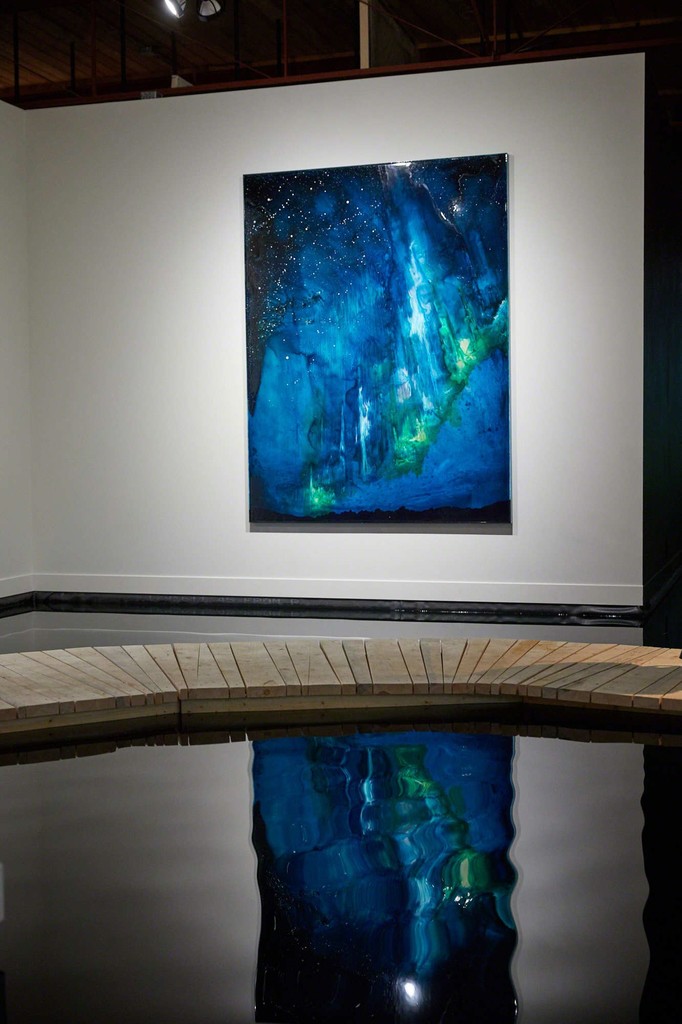 The Peter Robertson Gallery in Edmonton is pleased to present Steve Driscoll: And a Dark Wind Blows, a suite of new contemporary landscape paintings by the highly regarded Toronto artist. Presented as an immersive installation featuring an artificial lake and boardwalk, the show opens Friday, October 14 (reception 7:00 to 9:00 p.m.) and runs through Saturday, November 5, 2016.

The centrepiece of the show, the monumental These Are Truly the Last Days (title borrowed from a song by Montreal post-rock orchestra, Godspeed You! Black Emperor) presents an ecstatic vision of the northern lights. Created using Driscoll’s favoured medium of pigmented urethane, the three-panel painting contains passages of unsurpassed beauty, as swirling eddies of green, blue, purple and yellow-gold suggest nebulas, galaxies and rivulets of shimmering stardust, below a star-filled sky. Positioned at the long end of the gallery, it may be viewed from a wooden boardwalk over the flooded gallery floor, or seen more intimately from a small floating raft accessed by stepping stones.

“The aim of altering the gallery space is to throw the viewer off kilter, to channel a bit of that childlike sense of wonderment we experience in the face of the natural sublime,” says Driscoll, a veteran of many deep woods camping trips. “I want to evoke that feeling of the wind blowing against you, of being excited, exalted in the presence of natural power.”

Other pieces in the show will explore evening and nocturnal celestial phenomena such as low sunsets, constellations, the Milky Way, or the last vestiges of light peeping through the clouds at twilight. As the boardwalk winds through the gallery space, viewers will be able to contemplate individual works at their leisure.

Steve Driscoll is an award-winning Toronto-based painter who has had more than twenty-five solo exhibitions and has participated in group shows throughout North America. Upcoming shows include Gallery Stratford, the McMichael Gallery in Kleinberg and the Tom Thomson Gallery in Owen Sound. Driscoll has executed many commissions, is keenly sought after by collectors, and has been featured in Canadian Art, dART International, The Telegram (NL), NOW Magazine, Toronto Star, CBC TV and ArtSync TV. Publications include the 2012 monograph intelligence with the earth, with text by Gary Michael Dault, and 2014’s Giving Context.