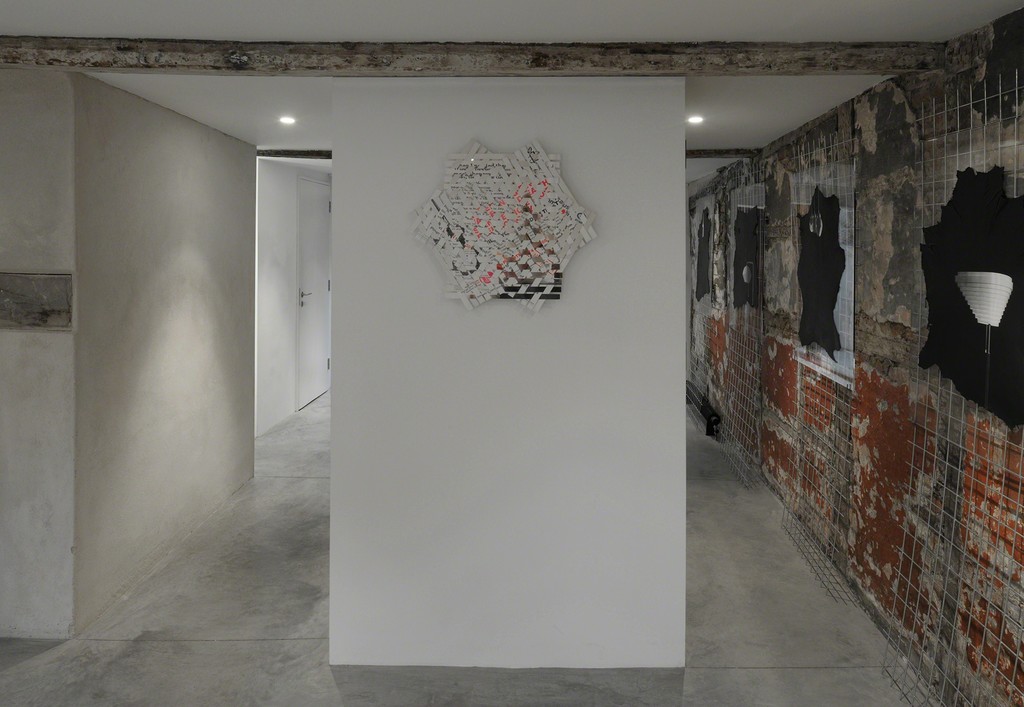 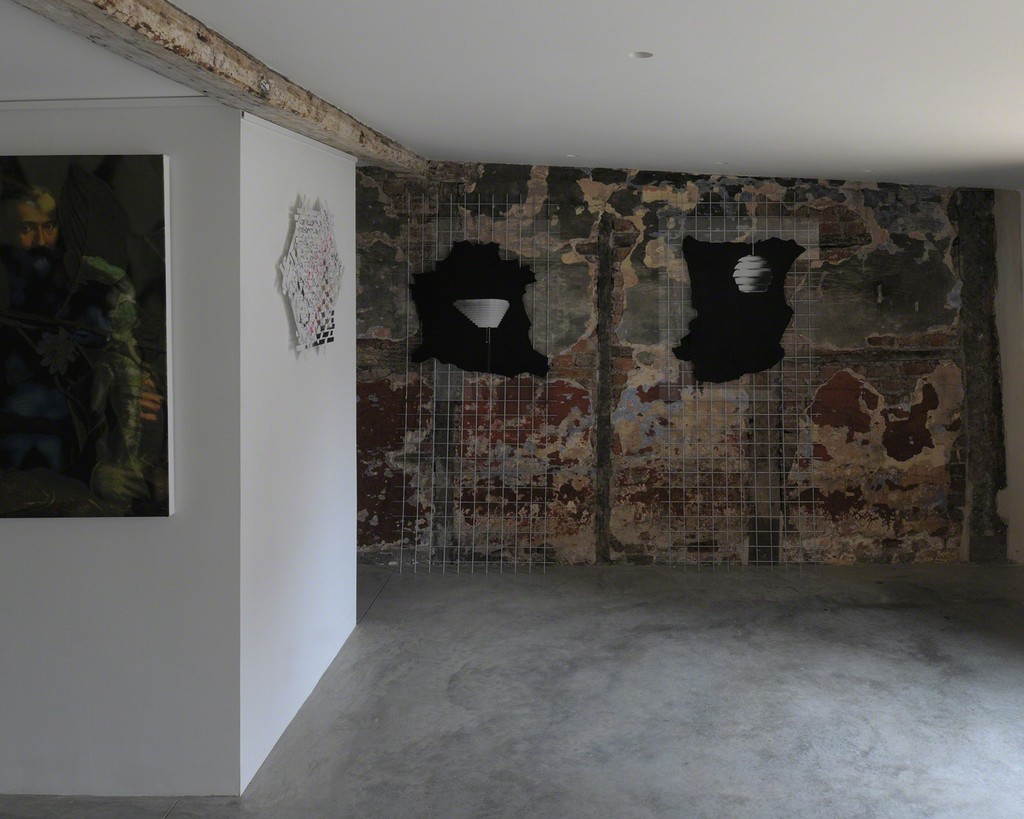 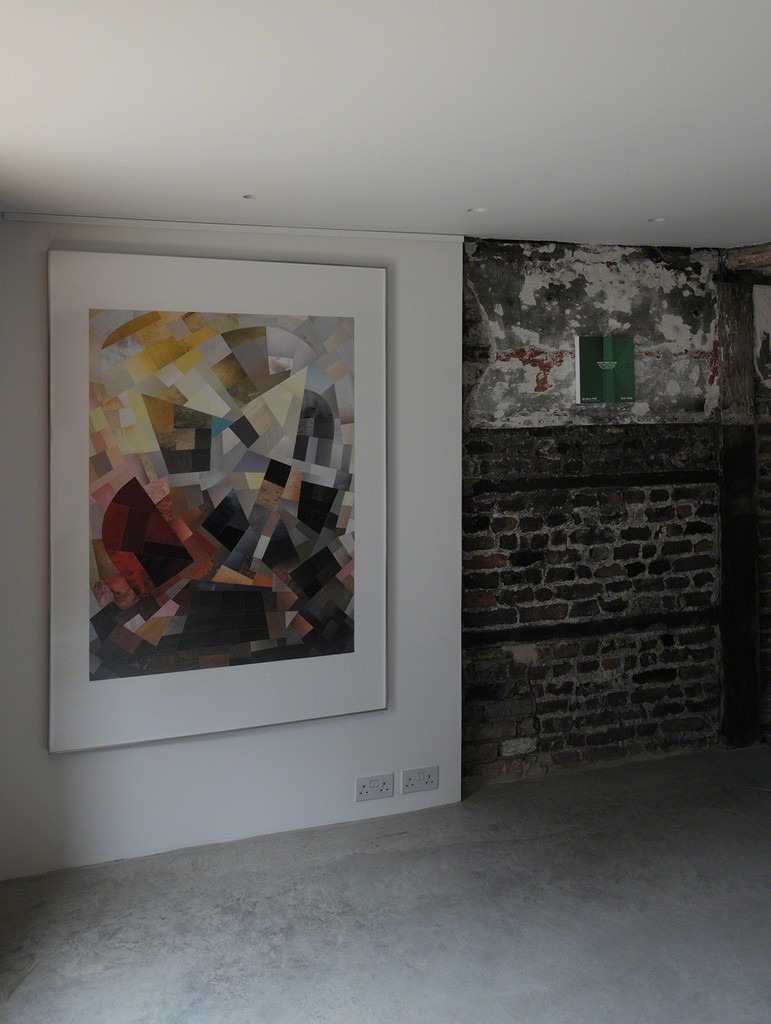 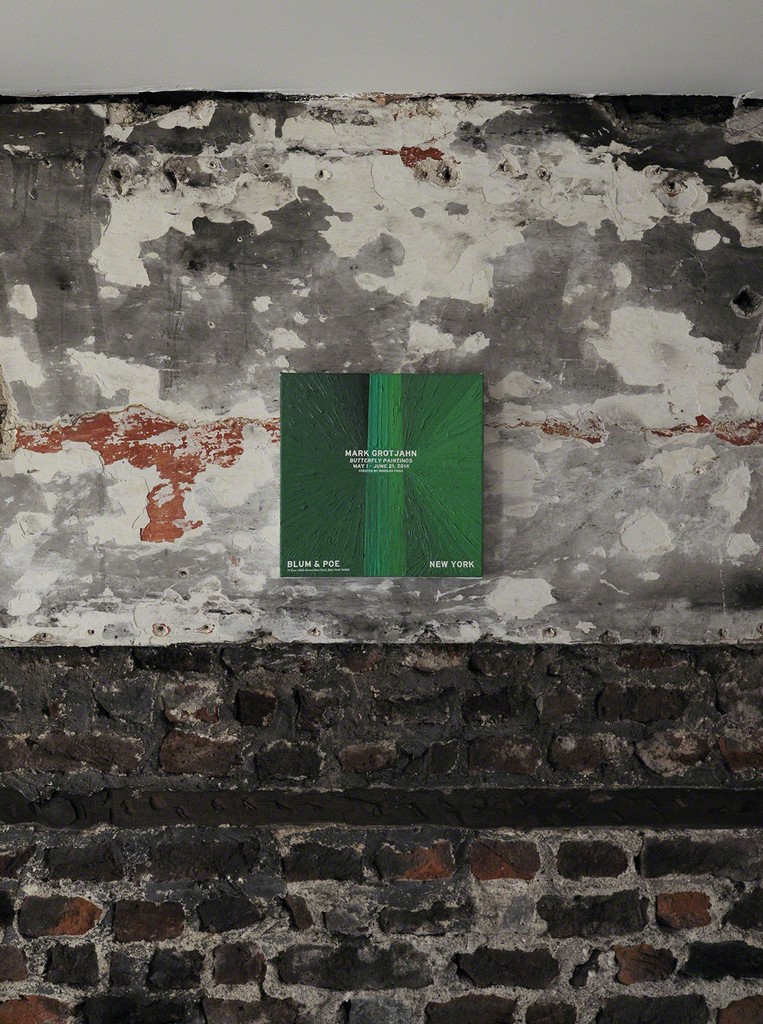 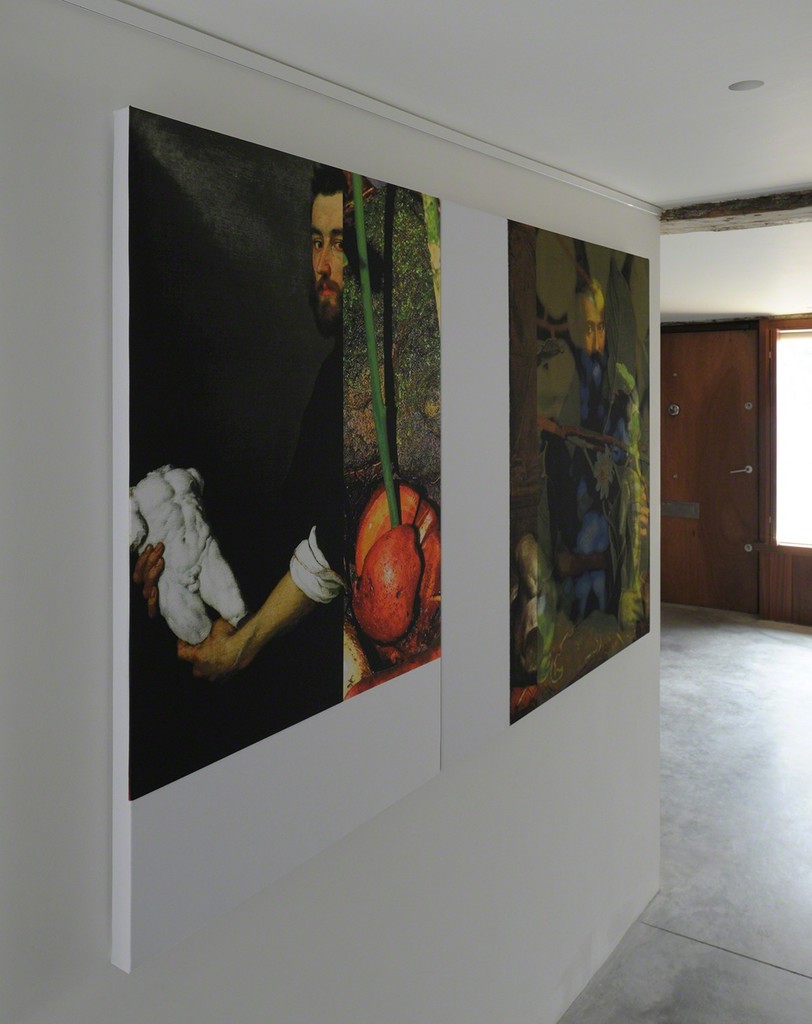 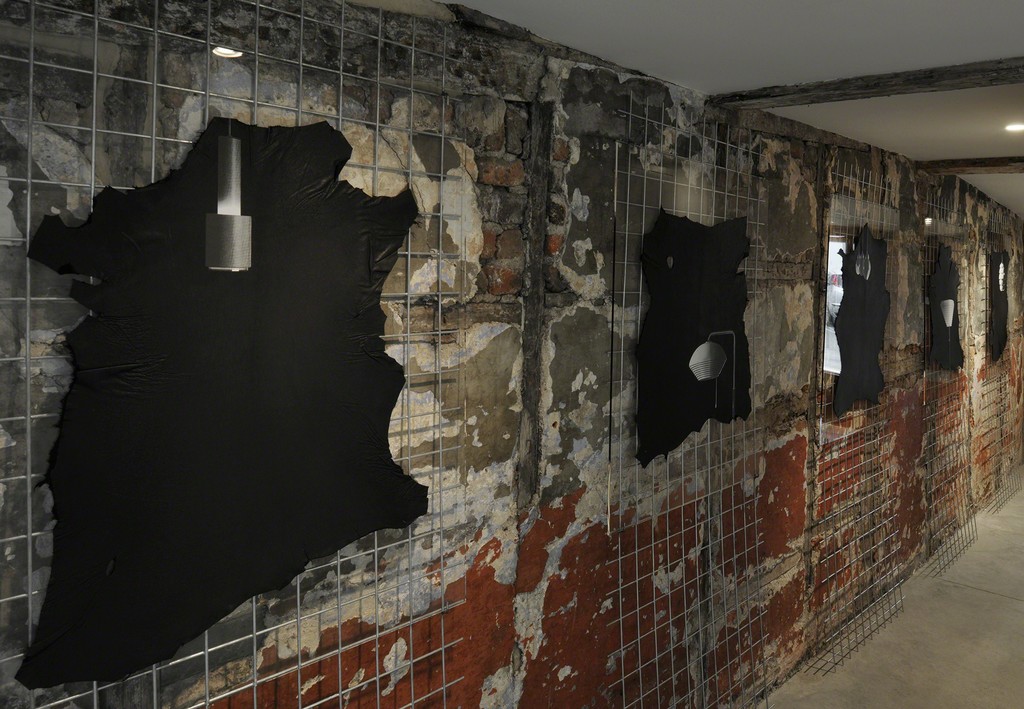 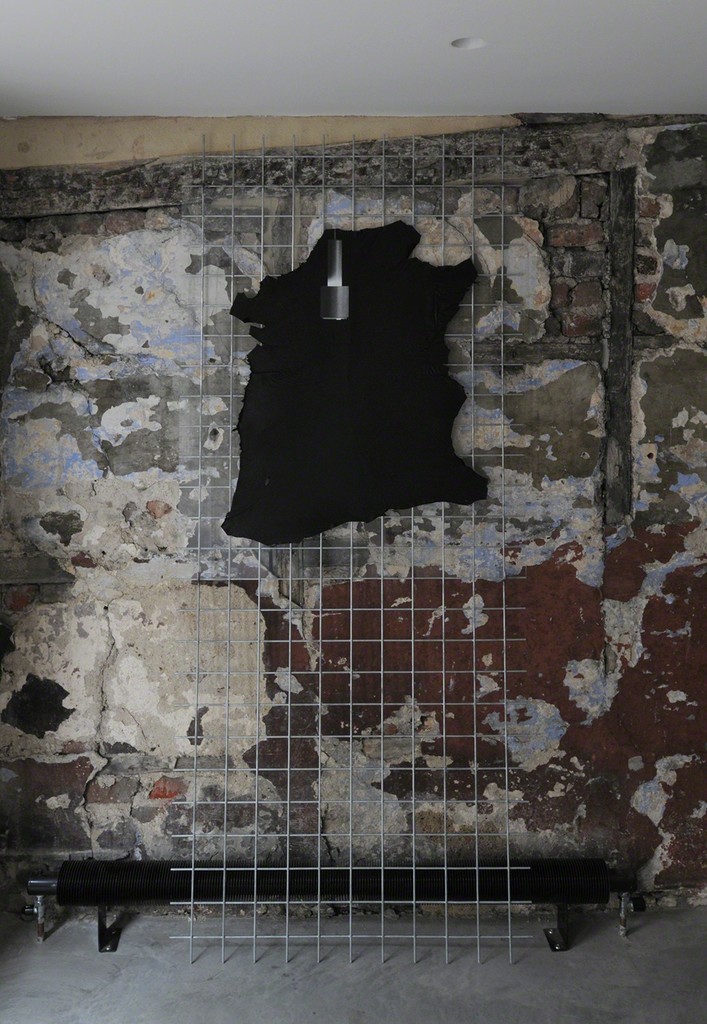 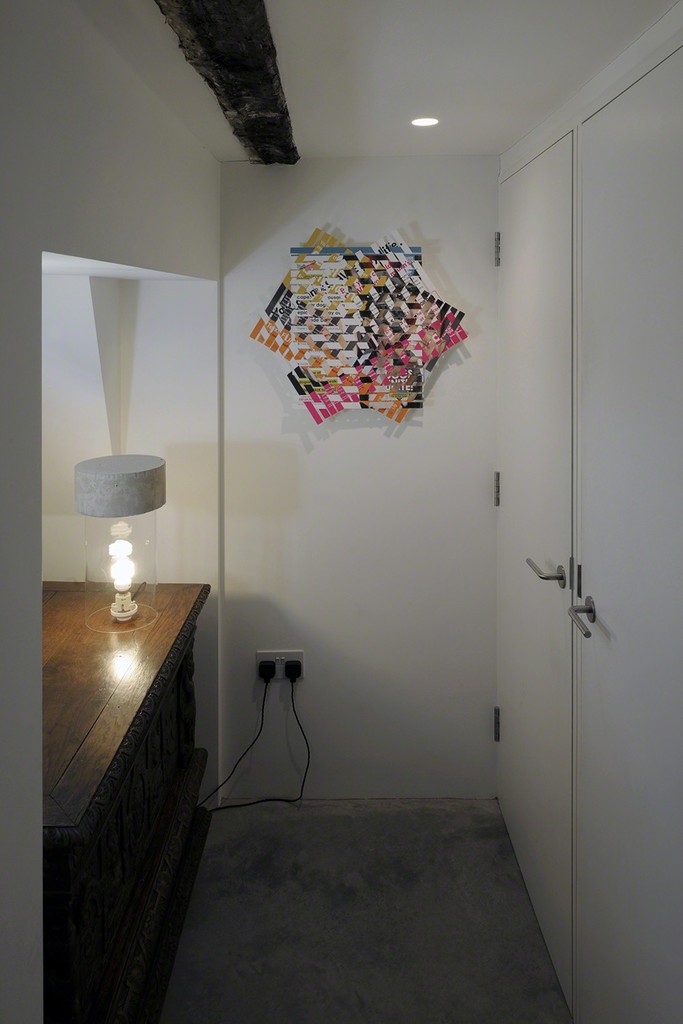 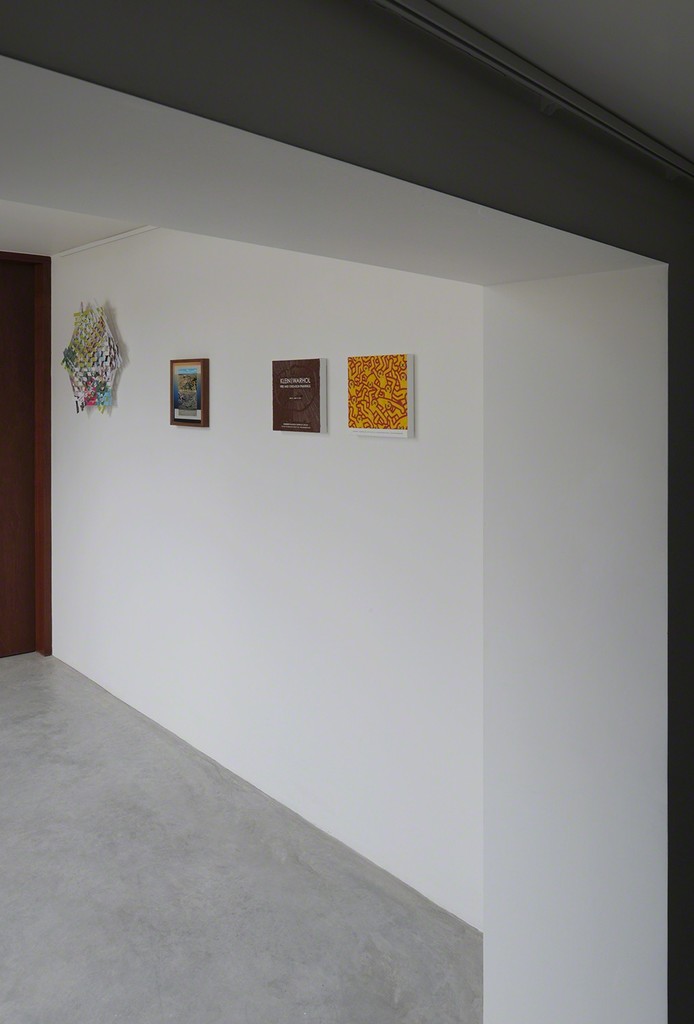 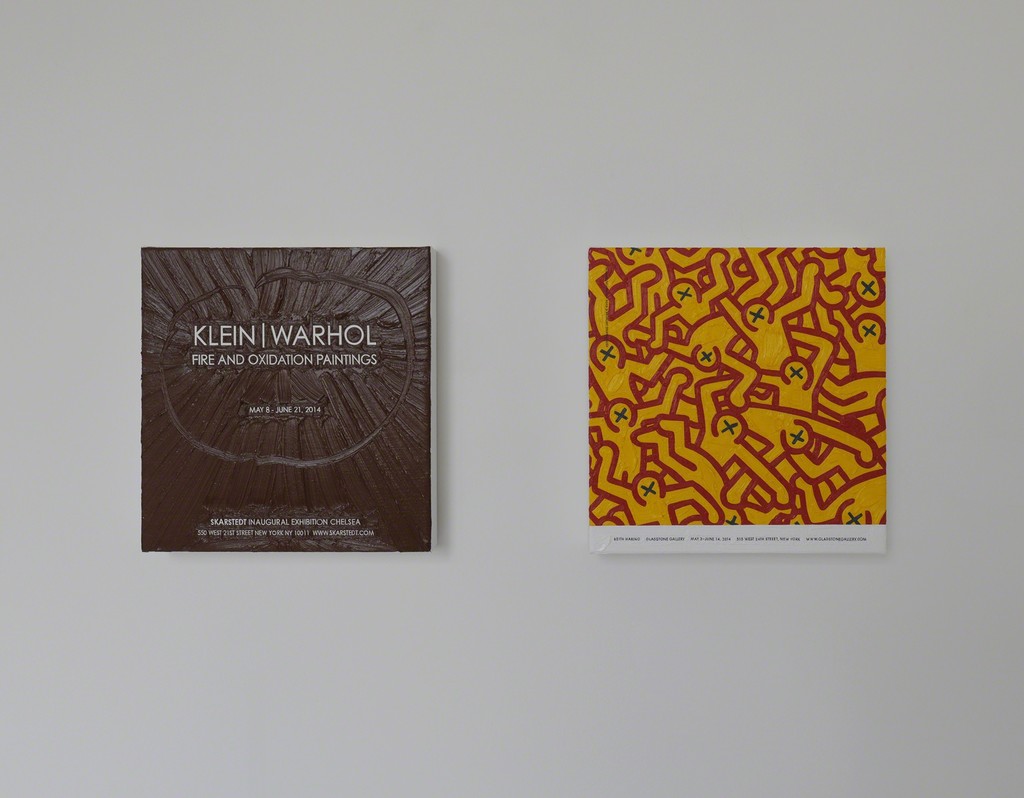 The task of writing about the practice of five artists who share a national identity (Australian) and an alma mater (Goldsmiths) is fraught with expectation; might these artists, on account of birth, passport and pedagogy, be shown to exhibit characteristics in common? Might we detect the mark, as elusive as it is invoked, of a distinctively Australian practice, of an expatriate practice, of a definable Goldsmiths practice?

The tautological title of the exhibition indicates that no straightforward answers will be discovered. A One way return mitigates against decisive action and forward movement; we circle around again. For the Australian artist living and working within the borders of that island nation or this one, the very question of identity, the national obsession with Australia(n)’s place on the world stage, approximates this condition of impasse.

The artist who moves to London to pursue their educational and professional ambitions may yet find themselves invoked as symptomatic of Australia’s terminal provincialism. The embrace of the global, sped on by technological connectedness, has unsettled binary definitions of centre and periphery, but the distance – writ by geography or apathy – remains: success will ever be measured by visibility and activity in the international art centres of Europe and the United States.

Alternatively, a different set of coordinates, a willingness to reorient the map, might attribute the presence of the Australian in London not to the ‘centrifugal pull of the great cultural metropolises,’1 but instead, empowered by the ease and accessibility of travel and by emerging global opportunities, to a confident cosmopolitanism. This is not expatriation necessitated by deprivation and distance, but instead a dynamic and fluid internationalism. Robert Hughes, speaking in 1984, was already able to point to a significant change in circumstance:
‘I left Australia because there are things you just can’t learn in Australia ... Today, a young Australian ... would be likely to do so without any particular feeling that they had to leave.’2

Whether impelled by the anxiety of influence or by a confident mastery of the lingua franca of international contemporary art practice, the artists of One way return make little overt reference to their cultural backgrounds. They are instead working within a conceptual tradition which, in its diversity, disrupts the perception of a homogenous national culture or house-style.
   
And here the Ouroboros of origins raises its head and consumes its own tail – inviting us to consider whether this very multiplicity might be attributed to the conceptual impetus of the Goldsmiths MFA programme; the often-cited openness of the course and the refusal of medium specificity.

Caitlin Yardley graduated from bachelor and masters programmes in painting in her native Perth. Her ready inclination toward an expanded practice of painting (an early body of work took the titles and dimensions of Willem de Kooning’s Woman series) was further stretched by the MFA:
‘It was quite difficult to go into Goldsmiths as a painter’. With its focus on conceptually-weighted work and with no delineation into departments or specialisms, students enter the Goldsmiths MFA not as ‘painters’, ‘sculptors’, ‘photographers’... but as artists. In a programme that embraces interdisciplinarity and experimentation the decision to work with or to privilege any particular medium requires articulation and justification. The medium is never a given. Yardley has found new energy in installation, integrating sculpture, prints and painting, found objects and an abiding interest in history. For One way return, Yardley draws from an ongoing investigation into the unexamined life of modernist design. Finnish architect and designer Alvar Aalto overlaps with pioneering child psychologist Anna Freud in a work that shares the precise clarity, and the cheek, of Aalto’s lacquered lamp designs; the sleek Hand Grenade (A110), the bulbous Bilberry (A338) and Beehive (A331) ... Though taking her cue from the sighting of Aalto furnishings in archival photographs of Anna Freud’s consulting room, Yardley’s collocation of these biographies is as idiosyncratic and unexpected as her tactile combination of goatskin and galvanized steel.

Alex Lawler likewise looks to history, and in particular to the genealogies of minimalist painting, and postwar abstraction. In an act of laborious emulation, Lawler is remaking the fractured, colour-filled paintings of early abstractionist Otto Freundlich; the geometric shapes and hard- edged forms of the original work rendered as a collage of colour strips torn from the pages of ArtForum. Freundlich, who was murdered in the Majdanek Concentration Camp in 1943, was profoundly condemned in the Nazi purge of ‘degenerate art’; his monumental sculpture Der Neue Mensch (The New Man) disgracing the cover of the Entartete Kunst exhibition catalogue. Lawler finds in Freundlich both an inviting rupture ‘in which some part of German abstraction is lost’ and a productive structure by which the composition, and even the colour palette, of a new body of work might be determined. Lawler is an artist in search of a system, he has forged art from statistical data (Pie Graph Painting), and from pop song melodies (The Jeanny Paintings), and in systematic appropriation he embraces =a ‘technical solution’ for working with and through the influence of another artist.

For Lawler, the history of abstraction is there for the taking; it has the same ready-made potential as a found object. It is a tendency to ‘take’ that we might read into the methodology of all the artists in One way return, an inclination toward collecting, copying and re-contextualising that might bear out the validity of Rex Butler’s assertion of a ‘crucial connection between appropriation and the question of Australian identity’. This is not imitation as failure but as a profound and, uniquely Antipodal, strategy. The world turned upside down:
‘It is our very distance from overseas originals, our indebtedness to and mimicry of others that is valued ... Australian art thus is not simply original, but wants as it were to re-narrate the originality of others.’3

This is a provocative line of inquiry, even as it is problematised by the fact of expatriation – the ‘overseas original’ made local – and by the further fact, as identified by Jan Verwoert, that ‘stealing images today feels different.’4

In Steven Morgana’s south London studio, a photo test print riffs on the reputation of WikiLeaks founder Julian Assange as a cyber-ranger, ‘Ned Kelly of the digital age’5. Assange, via Sidney Nolan, is dressed in a bushranger’s helmet and there is a temptation to read into this composite image a ready metaphor for the artist’s own outlaw tendencies . ‘I am always taking things’, Morgana tells me, but he demurs at the comparison; ‘[Assange] is really changing things, I am just an artist’. Morgana’s light fingers form disarmingly decorative shapes in the Patterns
             series. His materials are fibreboard fundraising posters, purloined from the train carriages of the National Rail service. The posters tell of worldly ills and community concerns, famine in Africa, genital mutilation, foster care..., but their message is reduced to slivers; meaning reconfigured in a tight triaxial weave. This is not a practice governed by a driving research interest but rather by a magpie-like fascination and a concern with the connectivity between things. To work with and reassemble this material is to literally tackle issues that otherwise provoke hopelessness or ambivalence. It is a physical act that like Morgana’s jarring and disruptive titles (Patterns: Suicidal, Genitally Mutilated & Sentenced to Death; Patterns:Lonely, Thirsty & Parentless), guards against distracted viewing.

Material transformation is key to the practice of Matthew Verdon, whose work is elevated by a fluency in ecological concerns and a keen radar for expressive objects. Eco polyester, made from post-consumer recycled bottles, is the chosen support for a printed diptych that yokes renaissance portraiture to an ancient and regenerating plant specimen from Australia’s Daintree rainforest. Self-cleaning, air-purifying photocatalytic concrete is combined with tobacco aggregate and a S.A.D (Seasonal Affective Disorder) lamp in a work that makes evident, and poetic, man’s struggle to control nature, while the assemblage that brings together a computer privacy screen and an electron microscope image invites new views on privacy and exposure. If there is romance in Verdon’s view of nature it is undermined by the futility of human effort to manipulate and bend our environment to our will.

The broad diversity of materials called upon by Verdon find their foil in the tight and focused practice of Simon Linke. It is to the applied minimalism, the direct grid-like design, of ArtForum magazine that Linke returns again and again. Just as the magazine stands as a historical record of the shifting fortunes of artists, galleries, tendencies, Linke’s paintings of ArtForum advertisements – a project conceived more than 25 years ago – are their own chronicle of a system that confers, and withholds, authority. The richly textured impasto of Linke’s painted surface is a departure from the flatness of the published page; we realise this is not a neutral space. Simon Linke graduated from Goldsmiths in 1986 and is almost a generation older than Verdon, Yardley, Lawler and Morgana, who completed their studies at Goldsmiths between 2011 and 2014. Linke recalls a time before London’s status as an art world centre was confirmed, when the scene was small, the conversation local and energy, focus and invention were located in New York and transmitted in the pages of art magazines. Inspiration was found and careers were made elsewhere. Linke has no memories of the country of his birth; he was three years old when his Australian mother and English father repatriated the family to England.

He has yet to return to Australia.