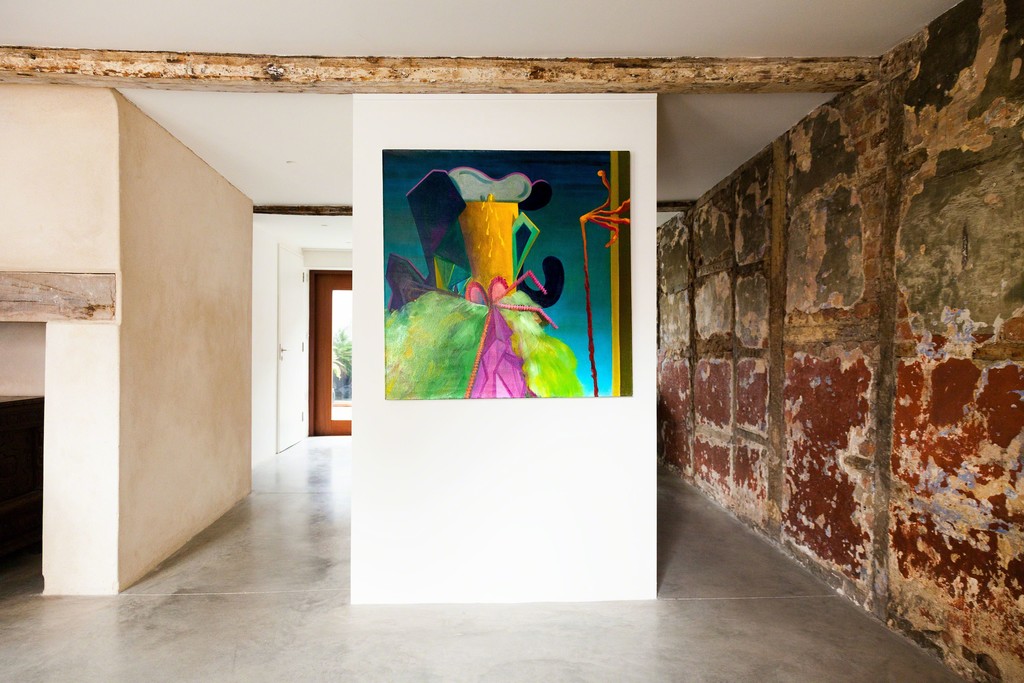 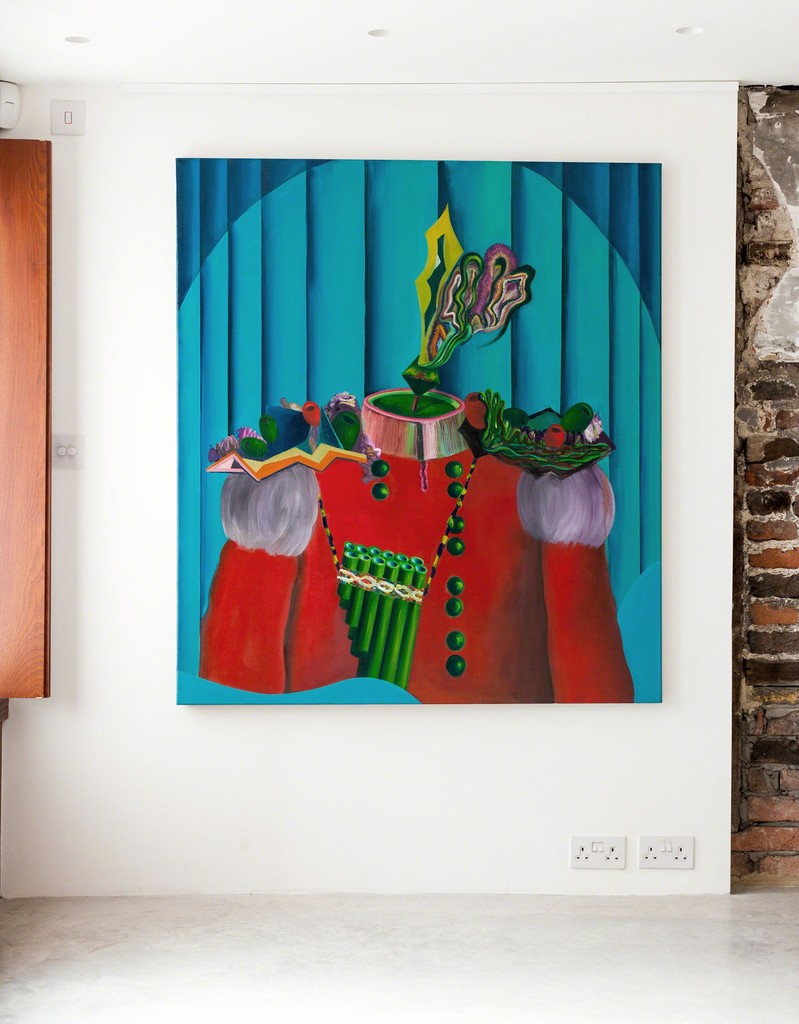 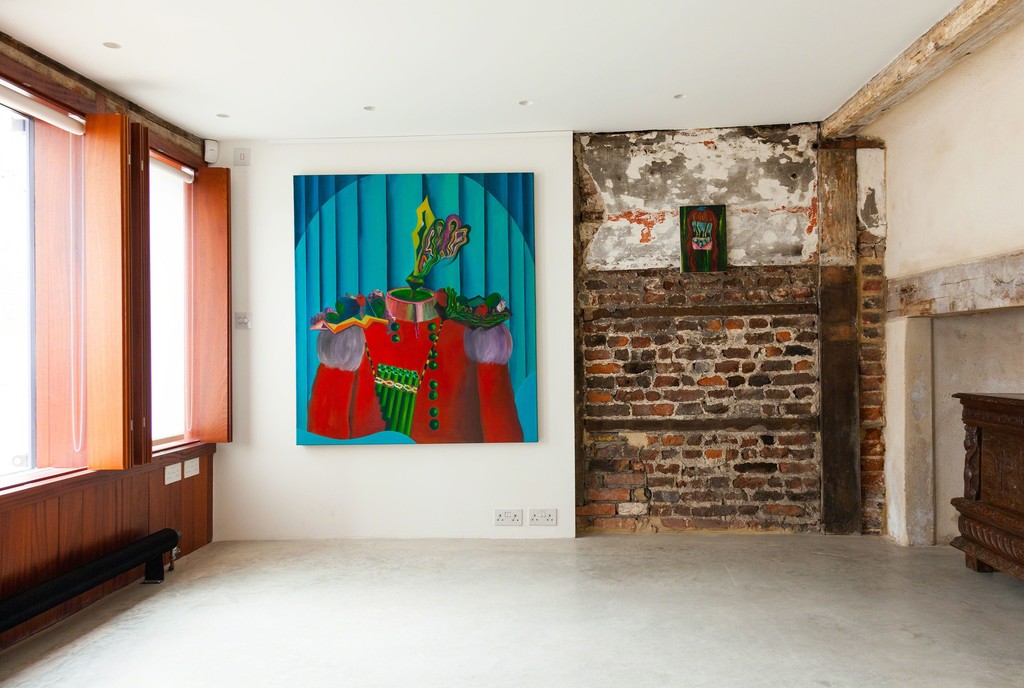 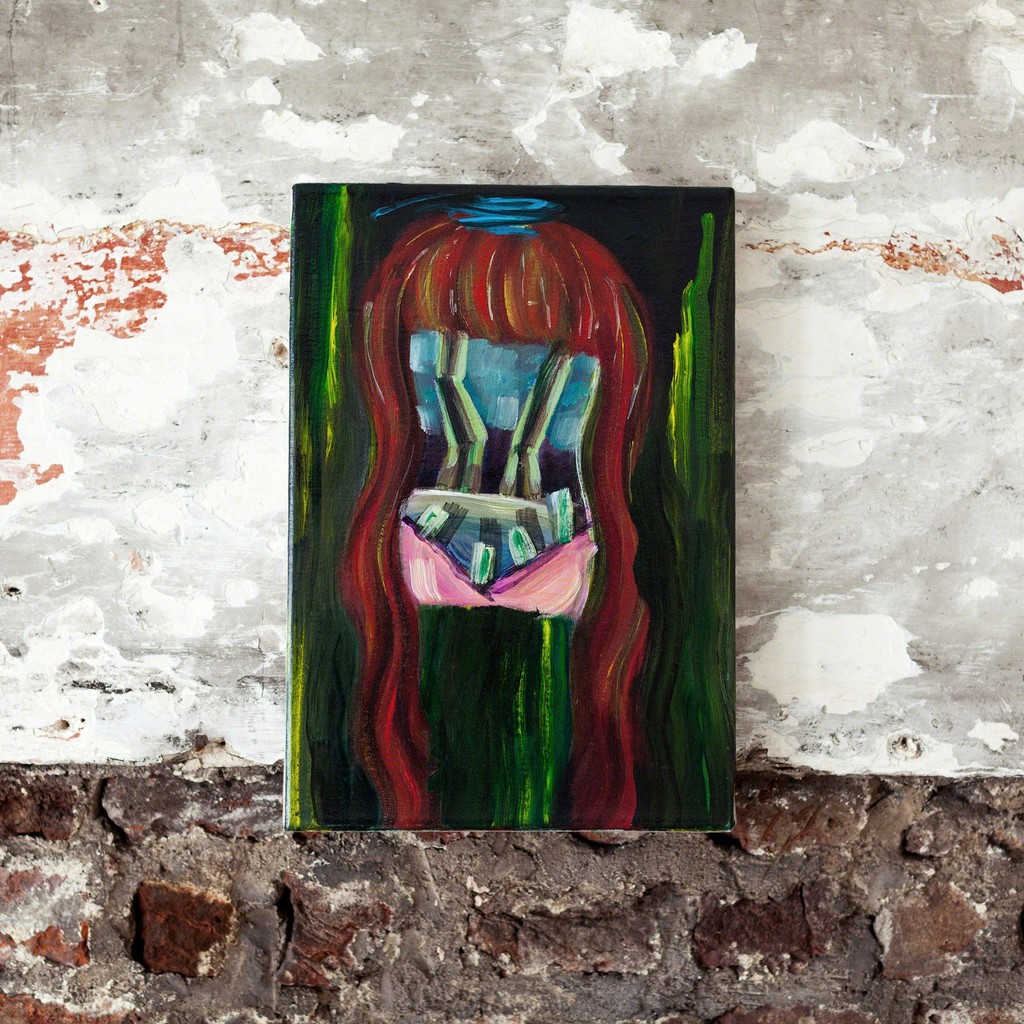 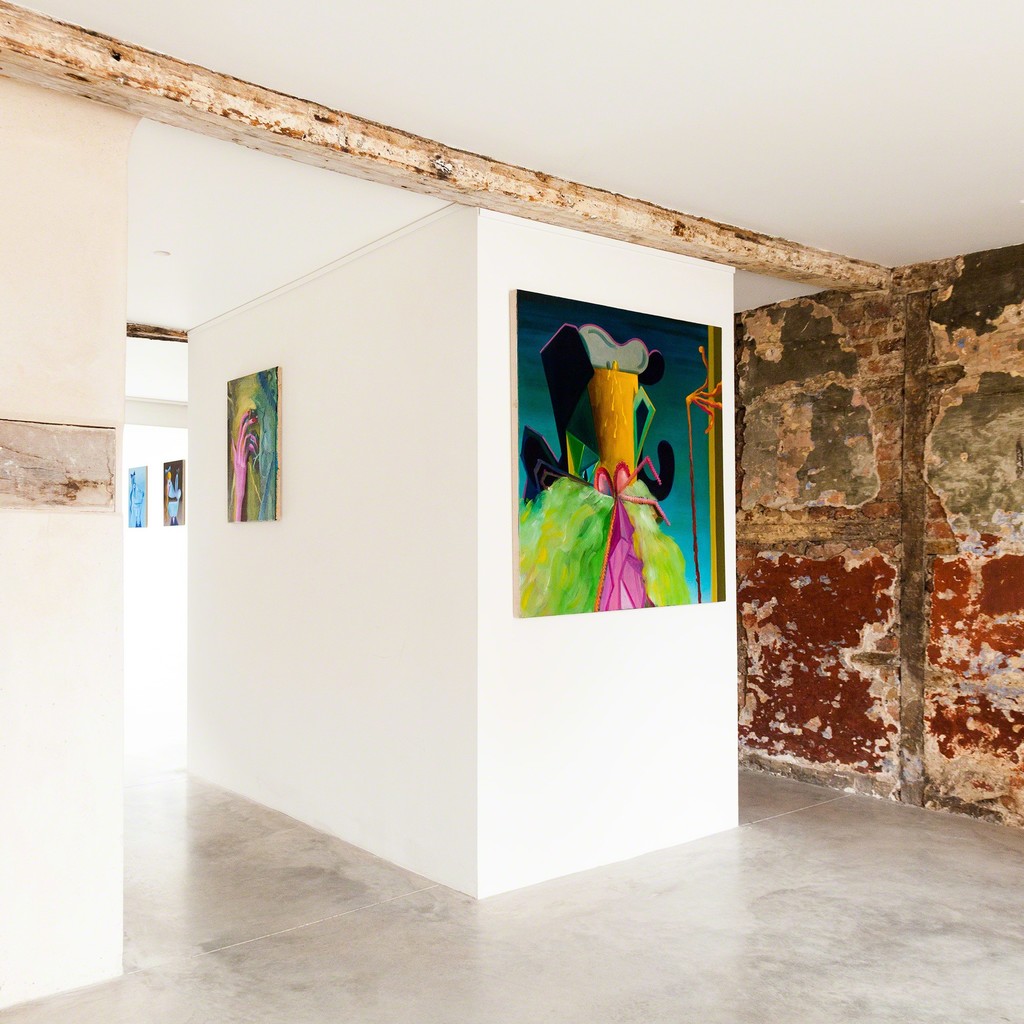 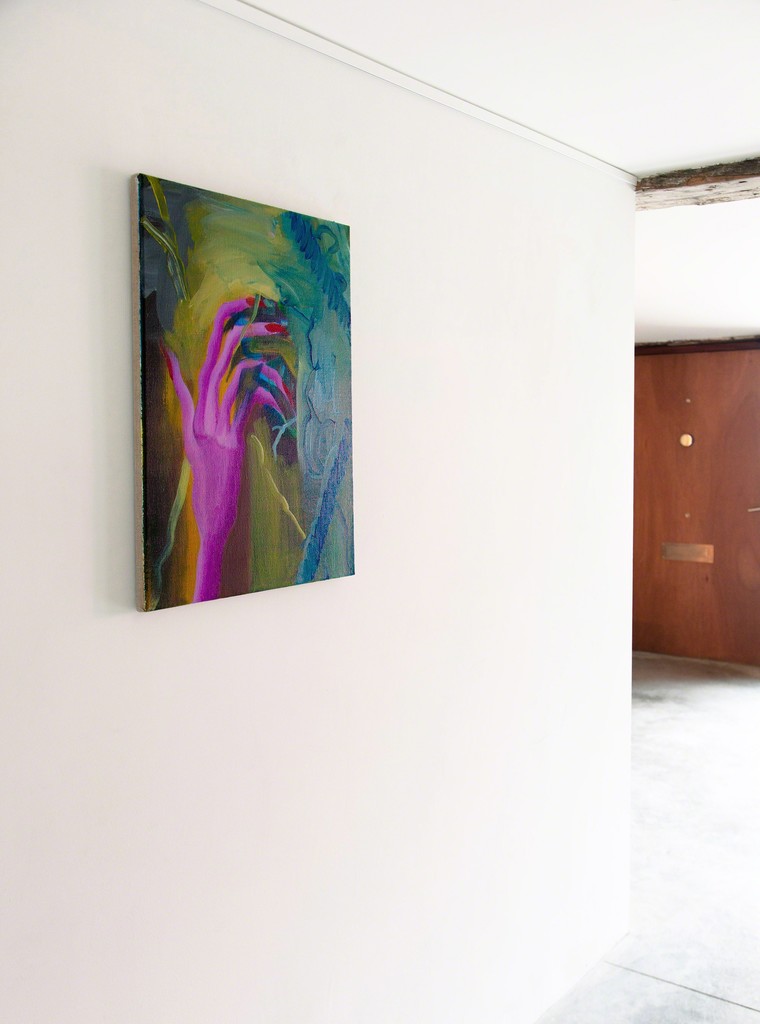 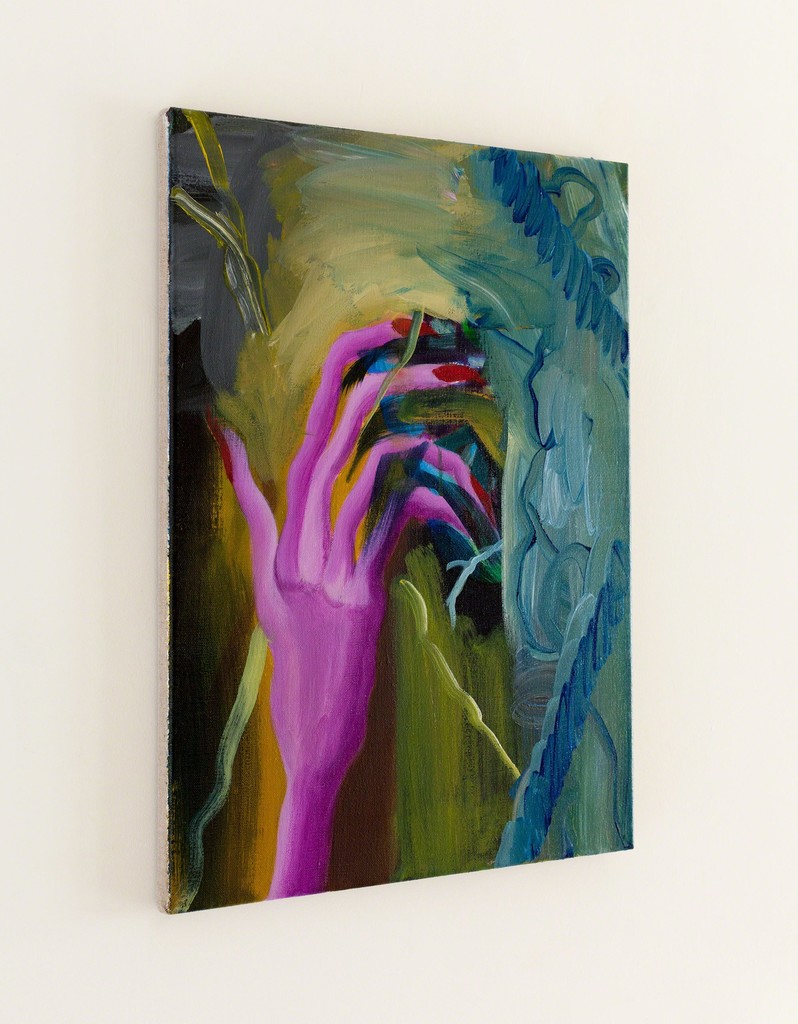 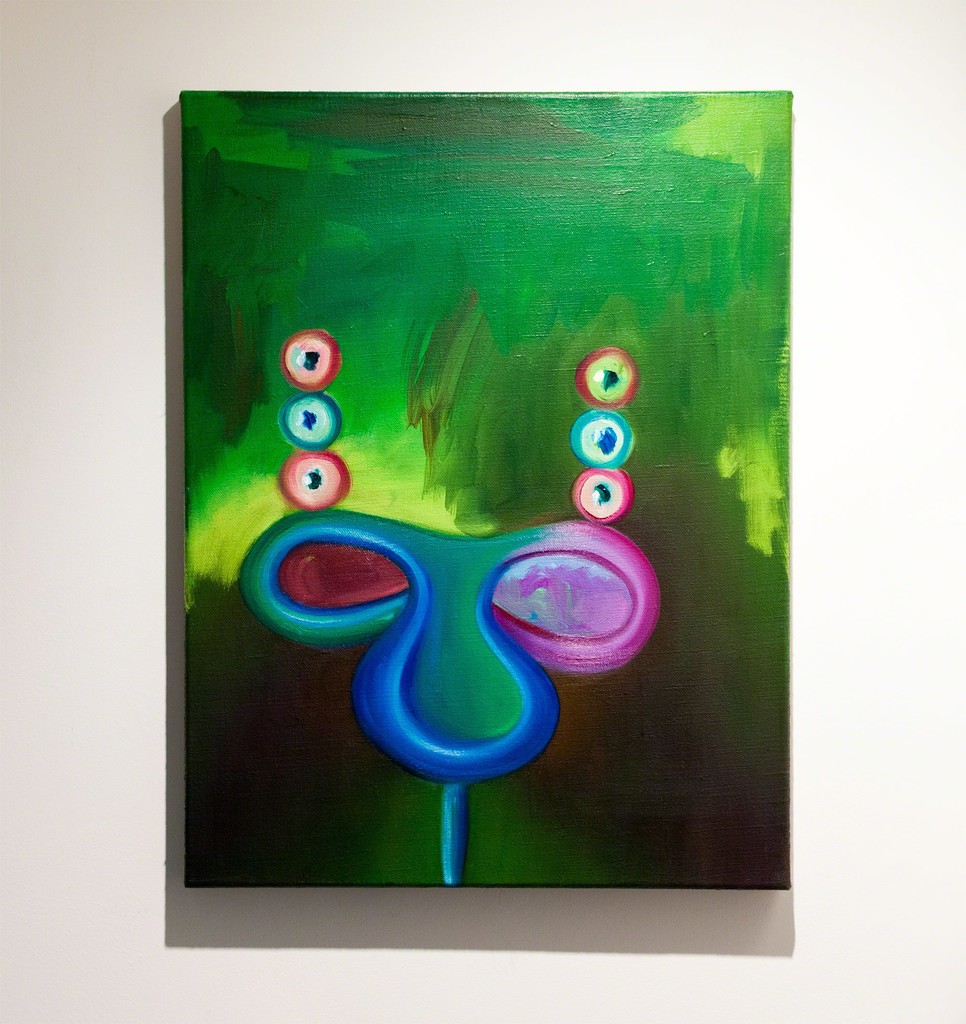 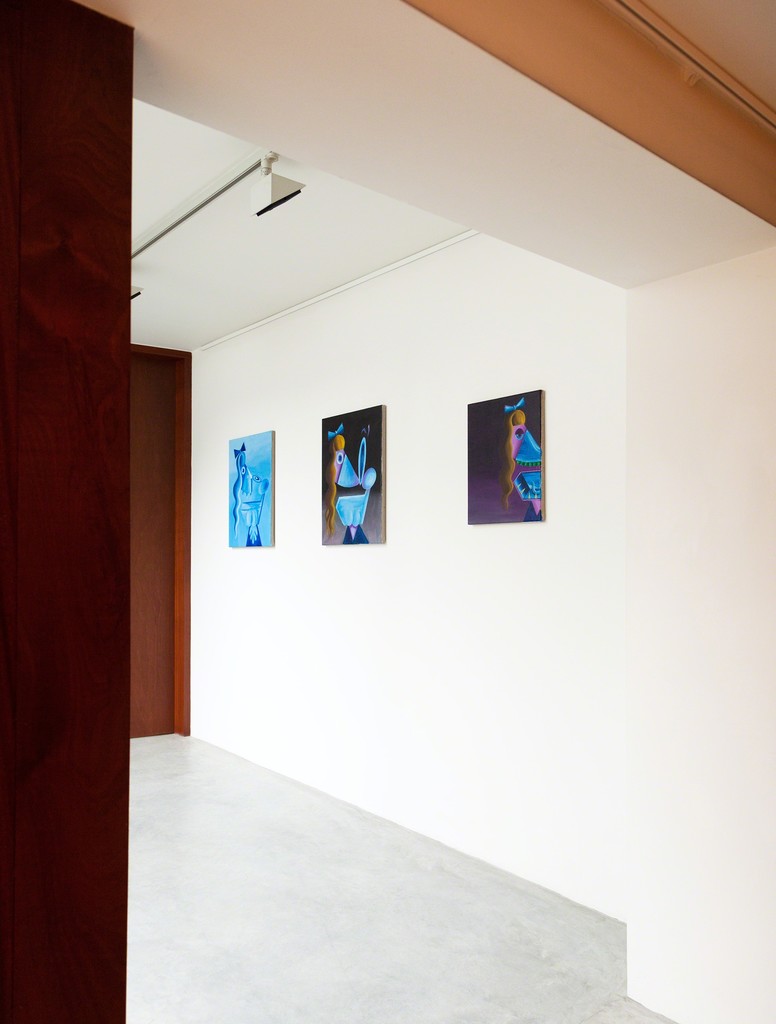 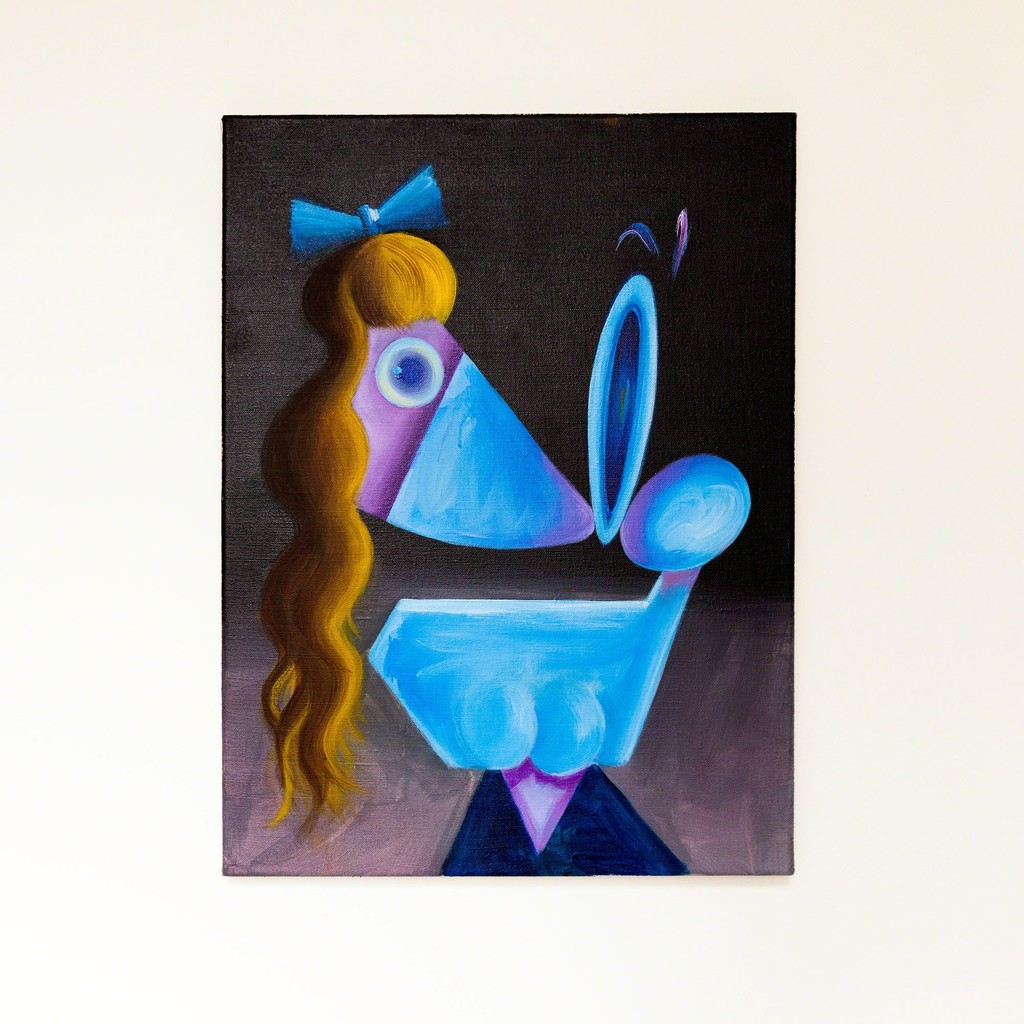 The work of Spanish artist Gorka Mohamed is of a both humorous and disturbing nature. Offering a concrete allusion to the pictorial language of cartoons, his protagonists often bend the boundaries between reality and fiction, between a yearning for infinity and the set rules of their everyday lives. With great sensitivity towards the shifts within modern day society, Gorka analyses sharply, while introducing a refined imagery that thrives on a unique use of colour, character and form. His current exhibition at Peter von Kant "Raise ravens and they will pluck out your eyes" introduces his latest body of work while revealing a distinct take on the current state of cultural reality.

Anneli Botz: The pictorial language of your paintings is very particular. Your cartoonish characters dwell between organic forms and an extravagant bending of shape. Looking back at your childhood, do you recall an early memory of how you perceived form and shape?

Gorka Mohamed: That was actually quite a funny thing. I started to study classical piano at a very early age, which gave my life quite a strict routine. Whilst the other kids were going to the playground after school, I went straight to the conservatory. My unique structure was called college and conservatory, college and conservatory. Therefore my weekend became something really special. Every Saturday morning I would wake up early to get up and watch cartoons. Watching cartoons turned into a symbol for excitement and freedom, into something that would enable me to break free of the week’s structure.

AB: What had you so fascinated with cartoons?

GM: They generally had a really strong effect on me as I was drawn to them without even knowing why. I guess it was a sensation for the infinite, for the lack of boundaries that you find within the extensive overstretching of forms and shapes in cartoons. Freud calls this the "Oceanic feeling", the feeling of limitlessness. Looking at cartoons, this feeling worked my mind unconsciously. The characters were dynamic; they were elastic and completely oblivious of time, space and gravity. At the same time they fluctuated from one extreme emotional level to the other. Cartoons are free of boundaries, they have no consciousness of death, sexuality and suffering but they use these exact elements to perform their actions, you know?

AB: They have no consciousness of death?

GM: (laughs) Well, it seems that way as they are constantly risking their lives in the most extreme way. They show us a reality without constraint.

AB: While the cartoonish-like protagonists seem to represent the irrational, your clear depiction of line and form introduces an organised structure – the rational. What is the origin, the desire for both?

GM: Ever since I was a teenage boy, I had a major interest in Nietzsche’s philosophy. I read "The birth of tragedy“ when I was about thirteen years old. There, Nietzsche speaks about Apollo, the god of light, of measure and structure and about Dionysus as the god of wine, of ritual madness and of the dissolution of boundaries. Both are completely contrary, yet depending on one another in order to create the creative genius.

AB: …as one without the other would either dissolve in pure logic or utter ecstasy.

GM: Exactly. Even though this is not as important to me now as it was then, I can see how my work is rooted in these ideas and days. What I have been interested in as an artist for years now, is the interplay of creative freedom and failure. It is about how we, as humans, constantly fail within our freedom, how we are misdirected by modern authorities without even noticing it.

AB: Why do you say “modern” authorities?

GM: I am talking about modern or new authorities because generally all authorities have something military about them. I have quite often portrayed figures that in some way resemble the military as I am also curious about this “old” kind of authority. But the new authorities that are regulating and controlling our lives are of a different kind: industries, brands, the apps we have on our phones. Those are the ones to set up our rules, to regulate our nature.

AB: There is a series of three paintings within your show at Peter von Kant, each depicting a little girl. One is called “Infanta Tanned of Malaria“. I instantly had to think of Diego Velazquez and his portrait of the infant princess Margarita, both because of the similarity of the name but mainly because of the central female young key figure and of course your Spanish heritage.

GM: There might be some underlying truth to that. When I prepared this show, I had a studio in Madrid, which was an exception as I usually live in London. But this time, I decided to move into a studio which was only a ten minute walk to all the big museums, the Prado, the Reina Sofia, and so on. I chose this space because I wanted to be more in touch with the Baroque paintings that you see in the Prado; they excited me and I started focusing more on portraits and other aspects of the old techniques. Therefore a connection to paintings like the Infant Margarita by Diego Velazquez is probably not even so farfetched.

AB: The other two pieces of this series are called “Doña Passiflora del Tinder“ and "Maria Spirulina del Instagram“ – certainly with reference to social networks. What is your take on our social media driven society?

GM: I used these references because I am interested in fictitious characters that relate to people nowadays, but that simultaneously mock the current state of society and humanity.
When looking at these three girls for example now, they remind me of the twins in the Simpsons, Sherri and Terri Mackleberry. Then they also have these organic forms that look a bit like testicles, so there is a certain sexual connotation as well.

AB: Why is a sexual connotation important for you?

GM: Because I somehow wanted to allude to the agony of our daily existentialistic life. Some even see a vagina within the girl’s right eye. To portray the agony of our daily existentialistic life is crucial for me, which again shows in the contradictory titles of the works: Doña Passiflora del Tinder, the passion flower of Tinder, Maria Spirulina del Instagram - Spirulina, the diet supplement of Instagram. These are also indirect allusions to the advertisement industry and to all these brands that use our compulsive drive to make us buy something. Take perfume ads for example. They often use the words "eternity", "obsession", "escape". I wanted to make a mockery of this, so we can laugh about it. Maybe this is the reason why many of my paintings are also disturbing: because they tell a different truth.

AB: How often do you portray yourself?

GM: (laughs) Myself? I would like to say never but I suppose there is something of me in all my pieces. But I certainly portray more the vision of my surroundings than myself.

AB: Why is your exhibition at Peter von Kant called "Raise ravens and they will pluck out your eyes"?

GM: It is a Spanish saying.

GM: Exactly. It’s a proverb Spaniards use to warn against those who might repay favours with betrayal. I chose this as a title because it evokes a strong imagery with a bitterly ironic spin. This again fits the psychological presence of the characters’ portraits in the show.

AB: Do you find it hard to let go of your pieces?

GM: (laughs) That is good question, but a tricky one. I used to have problems with that. If you deliver a painting in the wrong context, the message changes. This is quite sad, but it happens from time to time, because things get out of control.

AB: You mean via the secondary market?

GM: Yes, exactly. Therefore I try to find the right people to work with, so that my work will reach those that will feel passionate about it, that will know how to treat it right and that feel like it brings happiness to their lives.

Anneli Botz is a freelance art editor and curator, based in Berlin. She has a masters degree in art history, philosophy and english literature and is part of the curatorial collective Point Project. Her written work has been featured in numerous online magazines and print publications such as Interview Magazine, Sleek Magazine, Artdfridge.de, Refinery29, Hey Woman! and iGNANT.