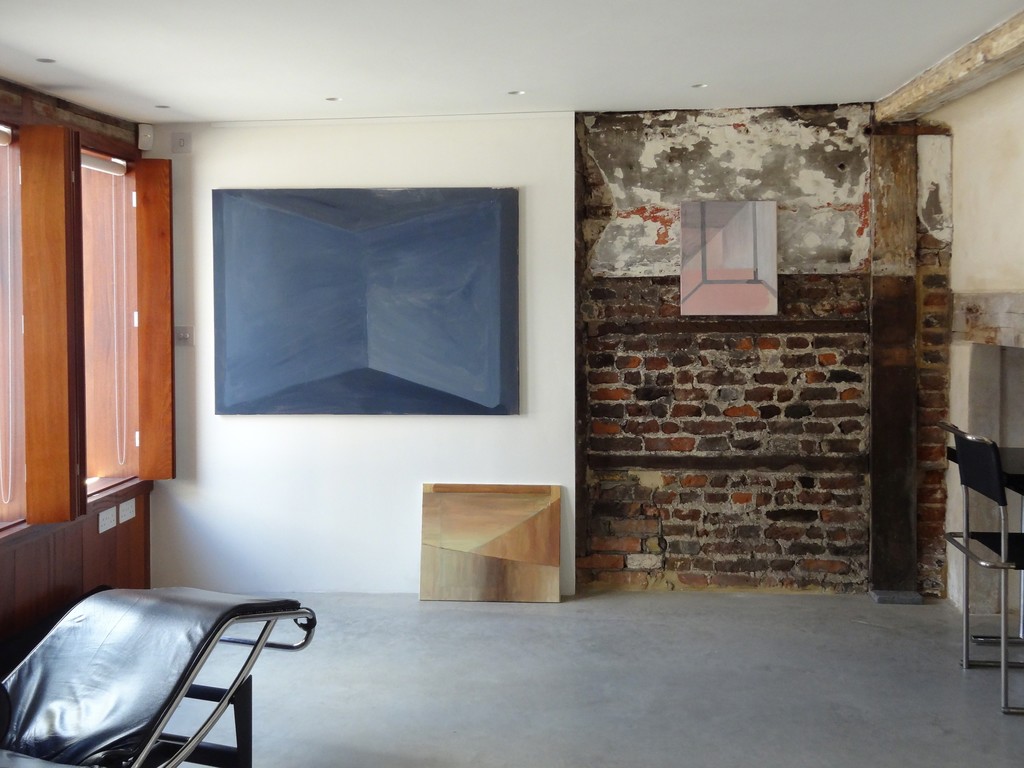 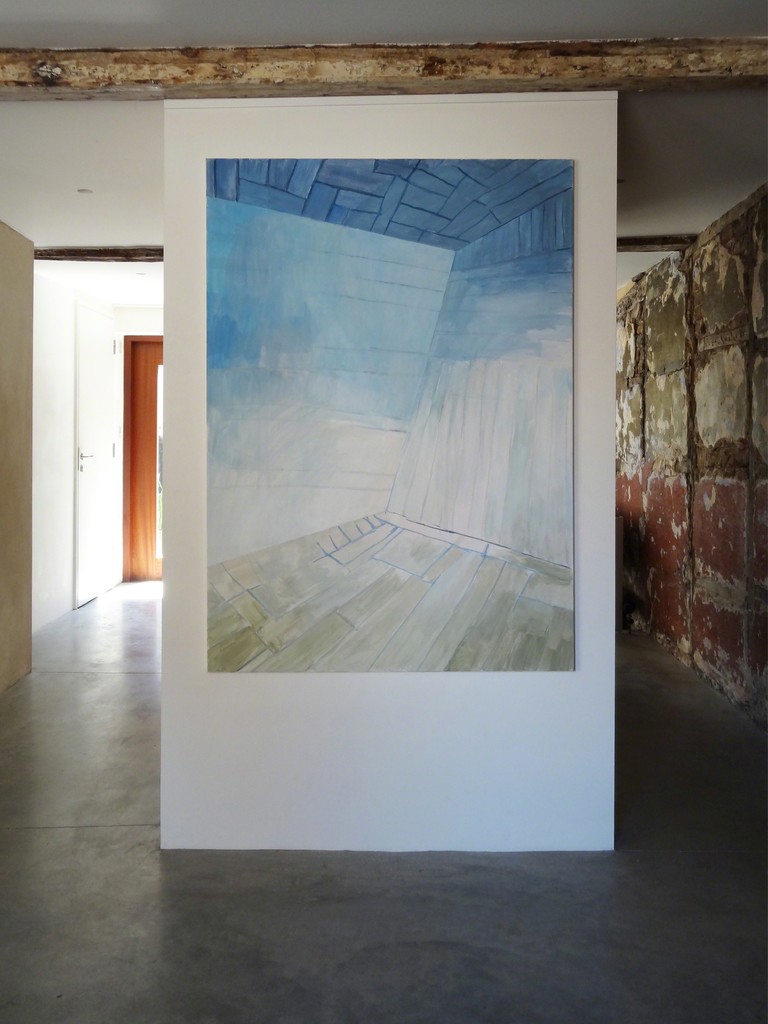 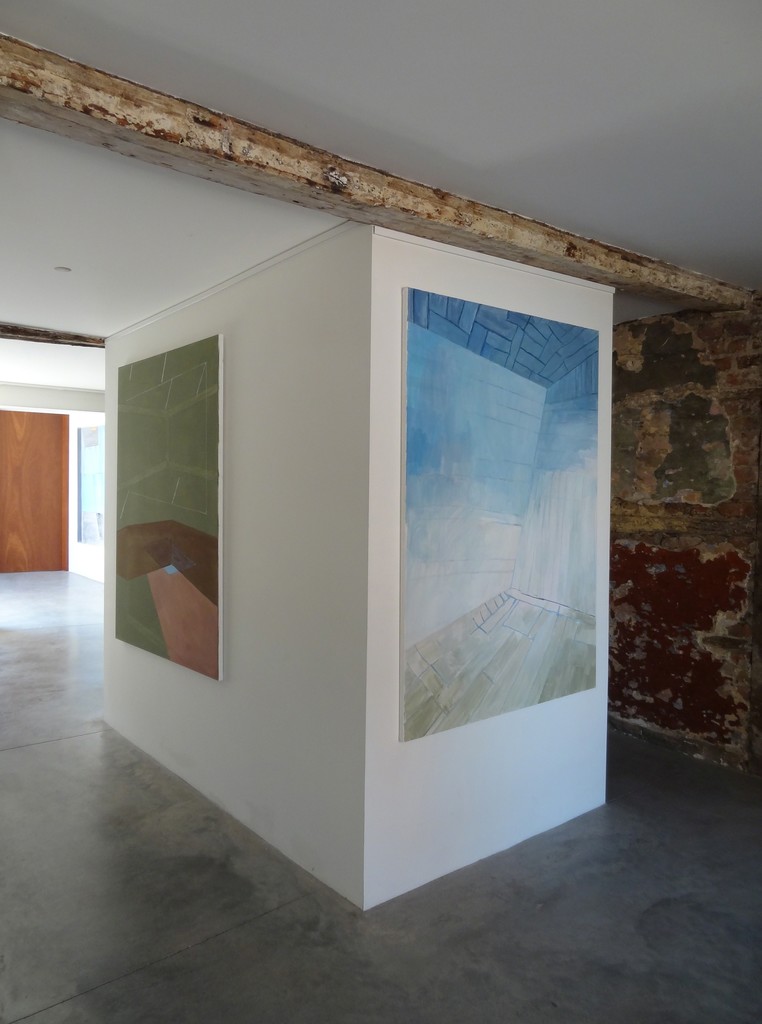 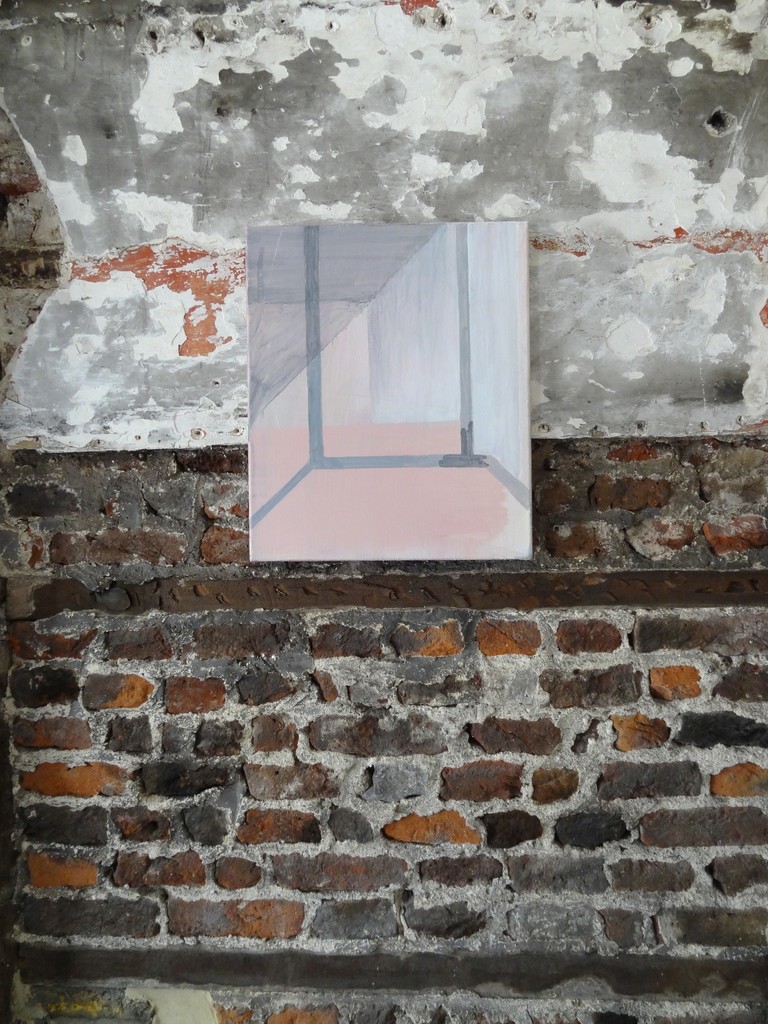 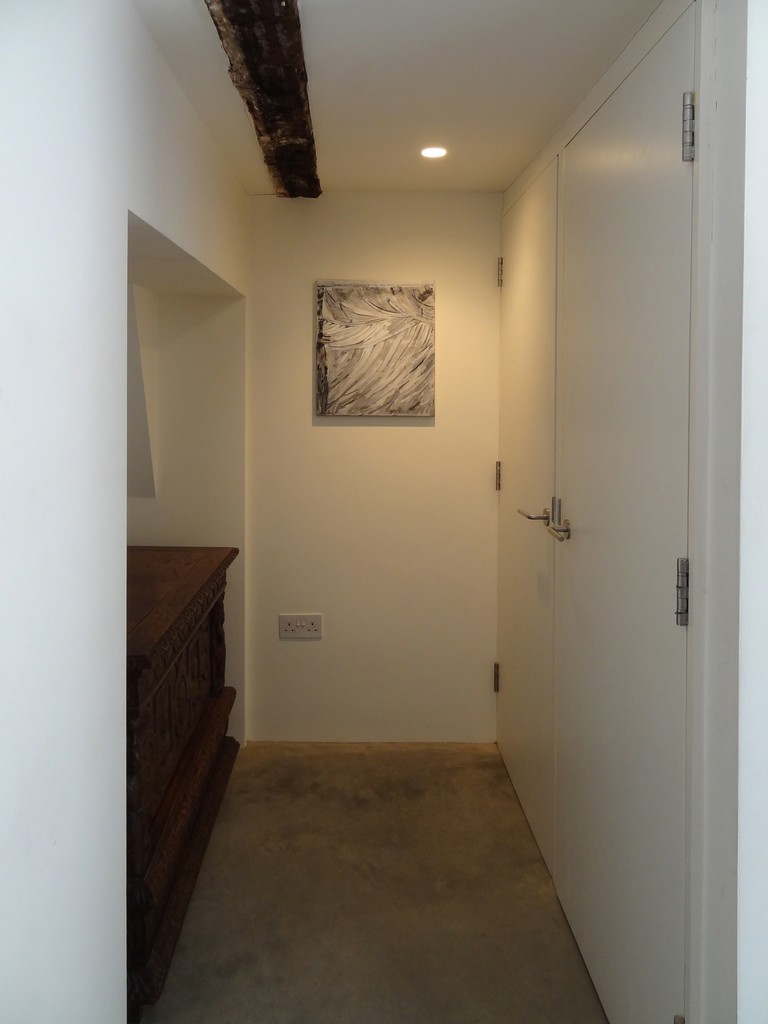 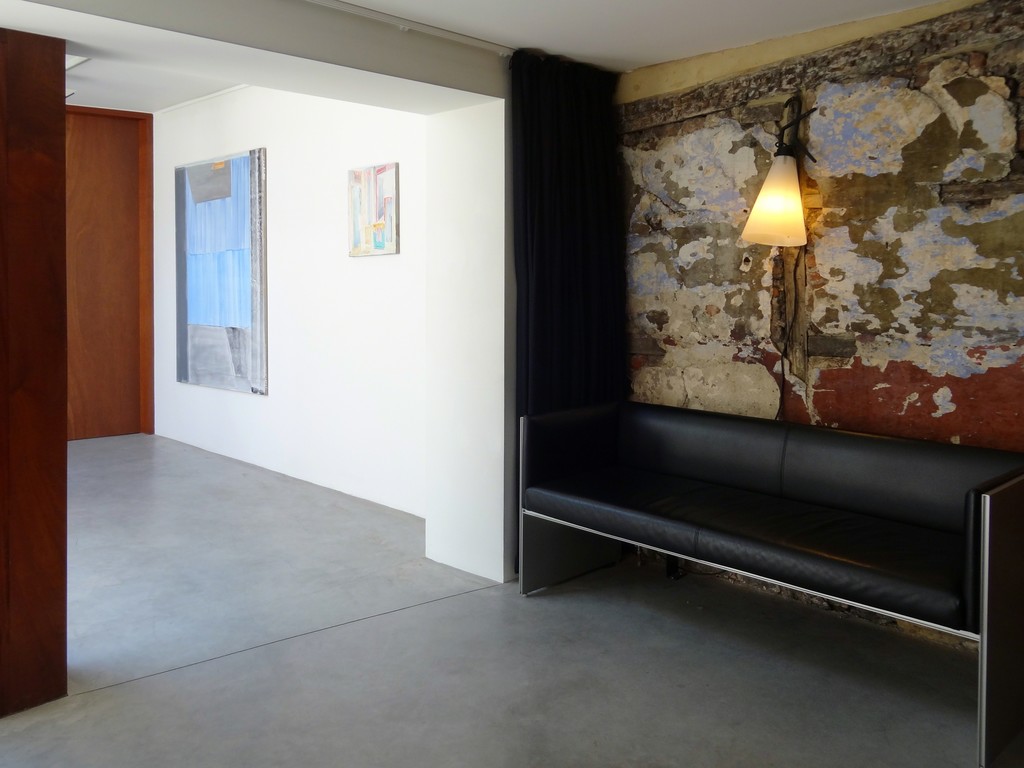 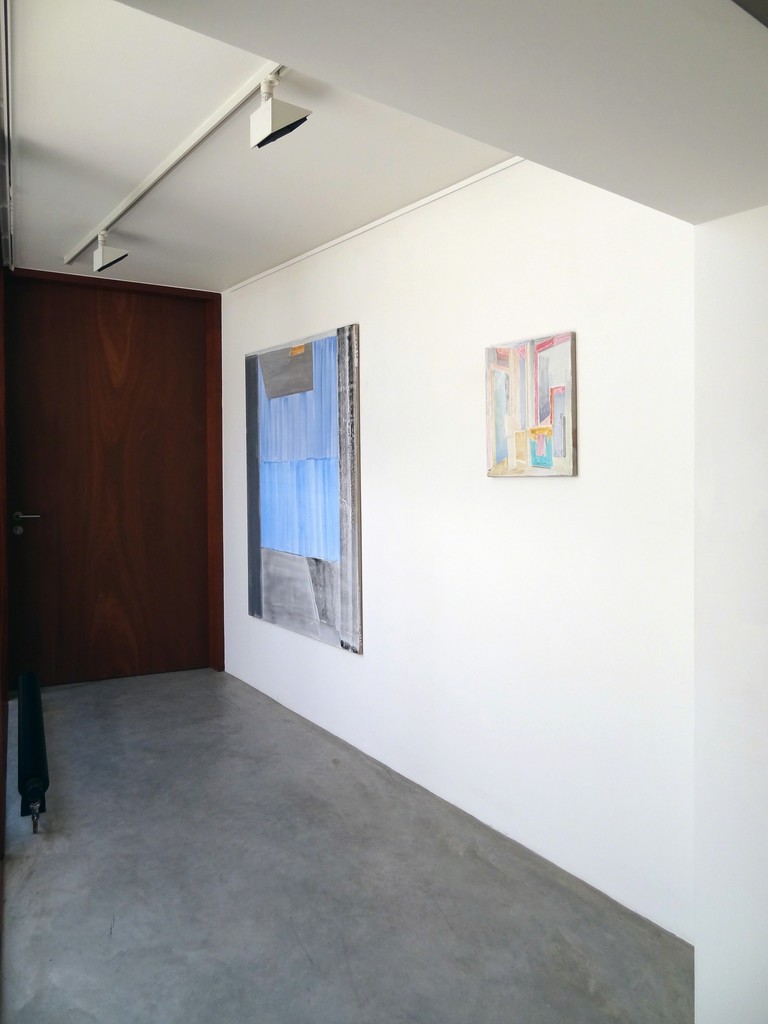 Anna-Lena Werner: Do you look at your paintings as one work-in-process or as individual series?

Tobias Buckel: They are a work-in-process. Some themes or motifs do recur and I like seeing works from different times set in relation to each other.

ALW: One of these themes is the geometric and graphical form. What kind of space do they suggest in your paintings?

TB: They describe a transitional space that is rooted somewhere between figuration and abstraction. I often have an idea of something figurative when I start with a new painting. This can be a picture, a certain shape or even a concept or a word that I am interested in. During the working process I try to get rid of these cognitive thoughts and ideas.

ALW: Can you make an example of a picture or a word that has been relevant for you?

TB: There are many paintings that derive from pictures of interior spaces and stage settings, and others that started with the words “panel” or “display”.

ALW: Why is it necessary to get rid of them?

TB: As long as I have concrete ideas in my mind, the paintings are just illustrations of my thoughts. It gets interesting, when I give up control and let things happen that couldn’t have thought of before. I am more interested in the abstract qualities of a painting than in narrative structures.

ALW: One of the abstract qualities in your paintings are the colours, which range from heavy dark browns to bright pastel pink tones. How do you pick them?

TB: My use of colour has become pretty much intuitive and the tones often stay within a scheme that reflects my personal taste at a time. The new ones have a lot of blue and grey tones – they appear more graphical.

ALW: Your application of paint is extremely thin, often even revealing several previous layers. Why do you choose to make the history of the work visible?

TB: This is my pondering working process. I start something with a few brushstrokes, then add some decisions, wash them off or paint them over again. I often let canvases rest for some days or even weeks before I go on.

ALW: Do you choose the materials intentionally or instinctively?

TB: I mix different materials intentionally, but the range of mediums is carefully selected. For example, after using oil and turpentine for a while, I experimented with using water-based paint that worked even better for a thin and washy application. In some new works I tested mixing paint using pigments, glue and acrylic binder, which is somewhere between acrylics and gouache, and I can still wash it off with a lot of water.

ALW: Not only spaces, also depths play a major role in your paintings. What made you choose the medium of paint and not, say, sculpture?

TB: Painting feels most natural to me. With a pencil or a brush I am able to formulate what I want to say. I tried other media during my studies, like video or sculpture, but I didn’t want to deal with the third or fourth dimension. Paintings have a virtual quality that fascinates me. Although it is flat, you can create the illusion of space or experience something that is not really there.

ALW: You play with light and shadow – perhaps one of the few traditional and figurative elements left in your paintings. If you think about painterly traditions, who inspired you in the beginning of your career?

TB: I used to be excited about really painterly stuff – abstract expressionism and some CoBrA artists like Asger Jorn. But in retrospect, I think that Sigmar Polke was most influential. I was around eighteen at that time – quite a while before I studied art. I come back to his work from time to time. There is still something about it that I don’t understand.

ALW: Both Polke and the CoBrA artists used a sense of playfulness in their art – has that aspect also grown on you?

TB: Yes, maybe. I wanted to work with a variation and add the lightness that I reach in my paper works also to some of my paintings.