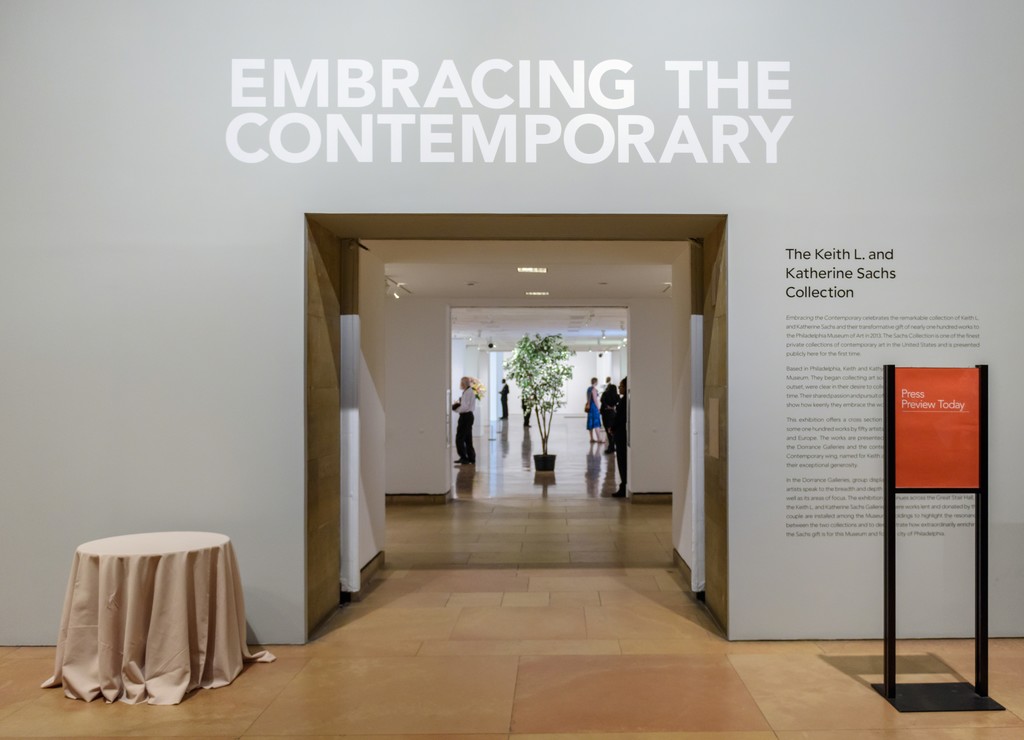 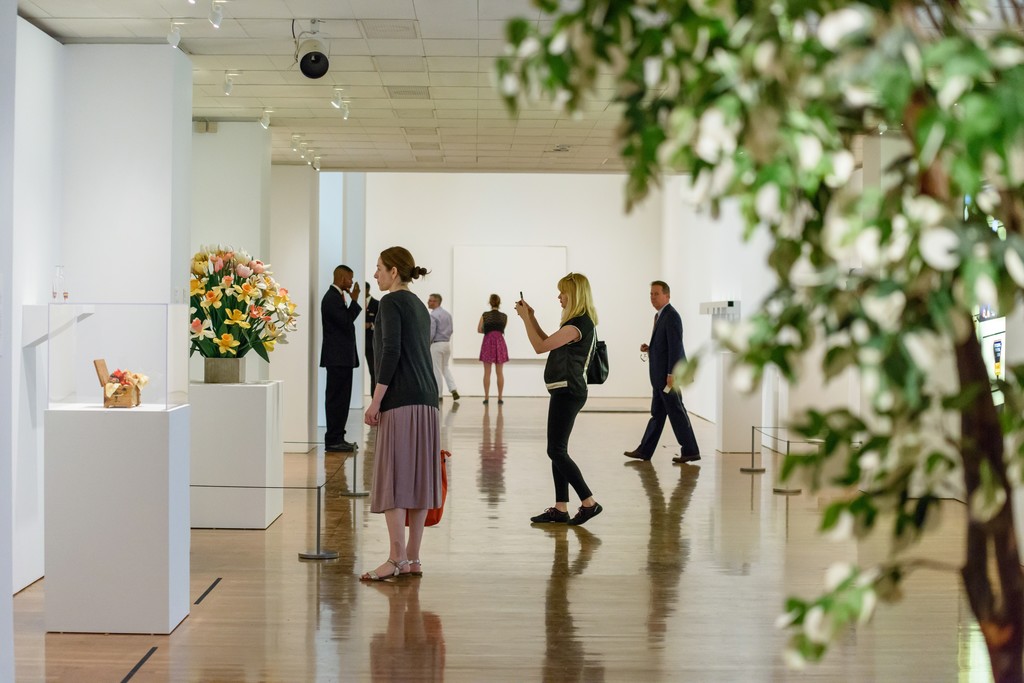 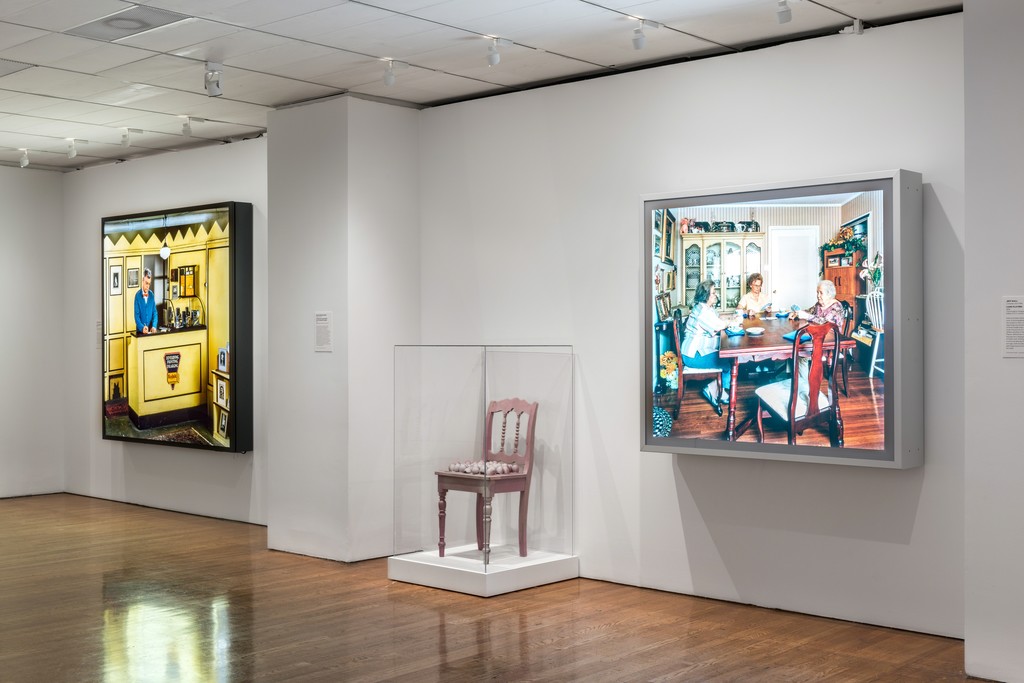 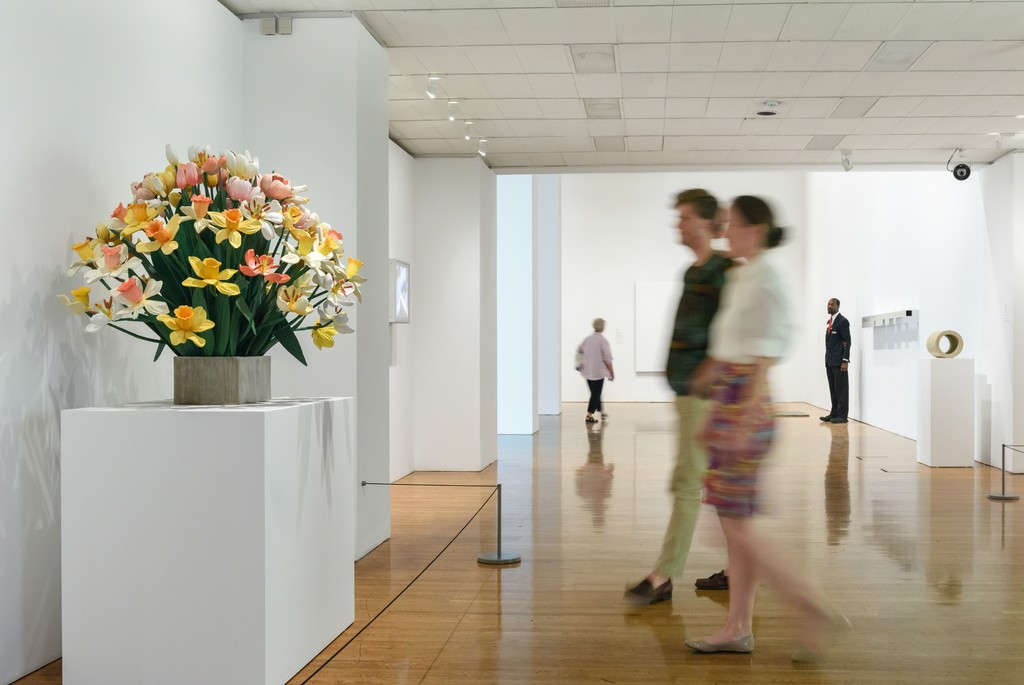 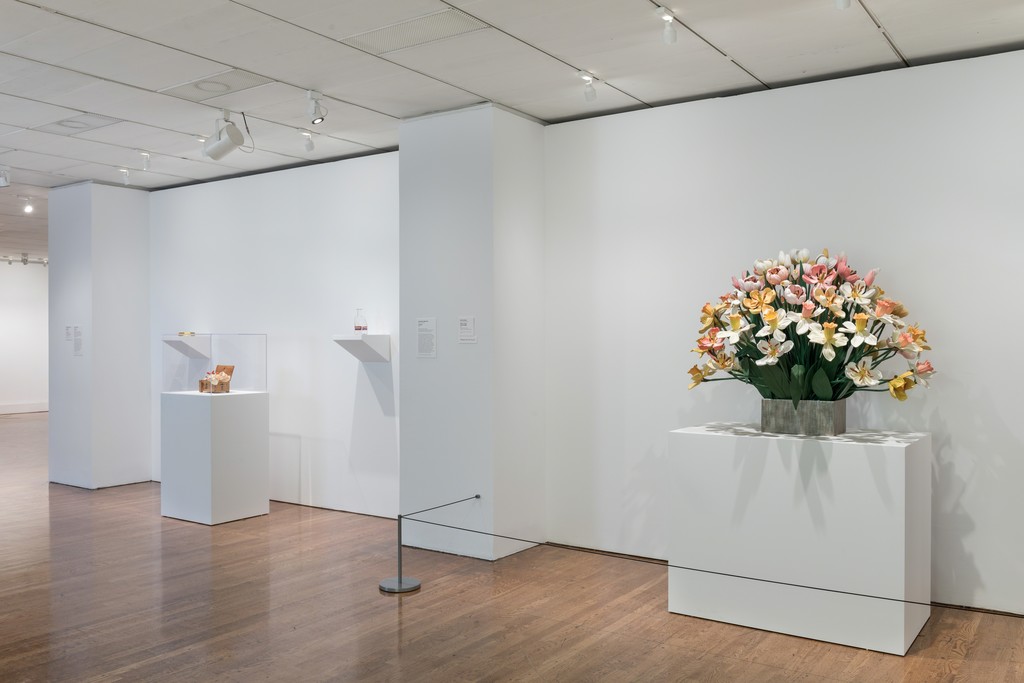 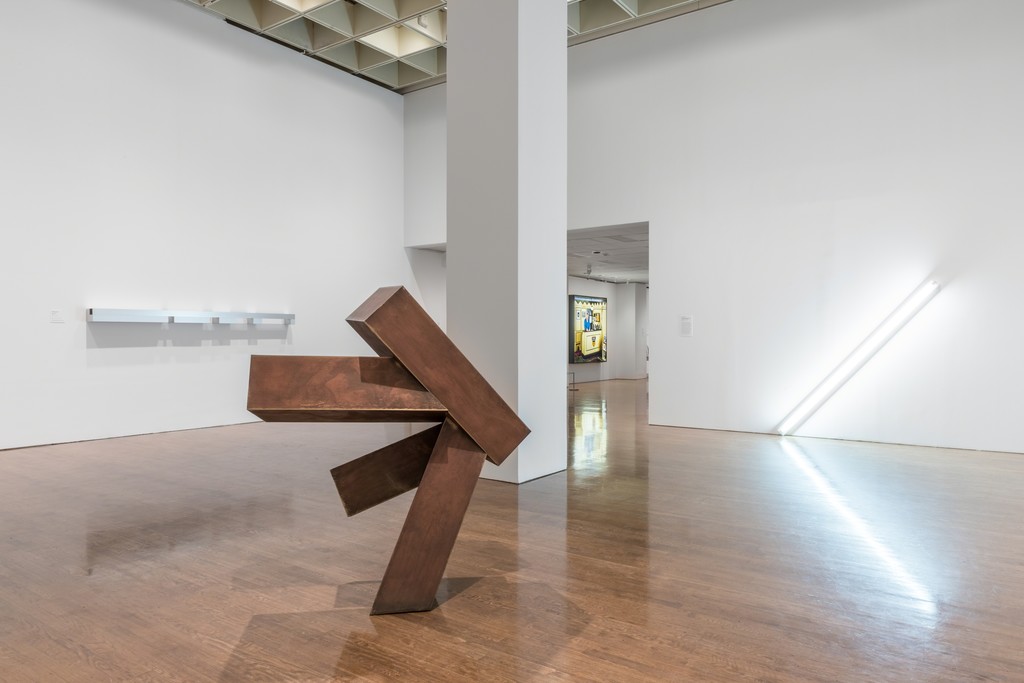 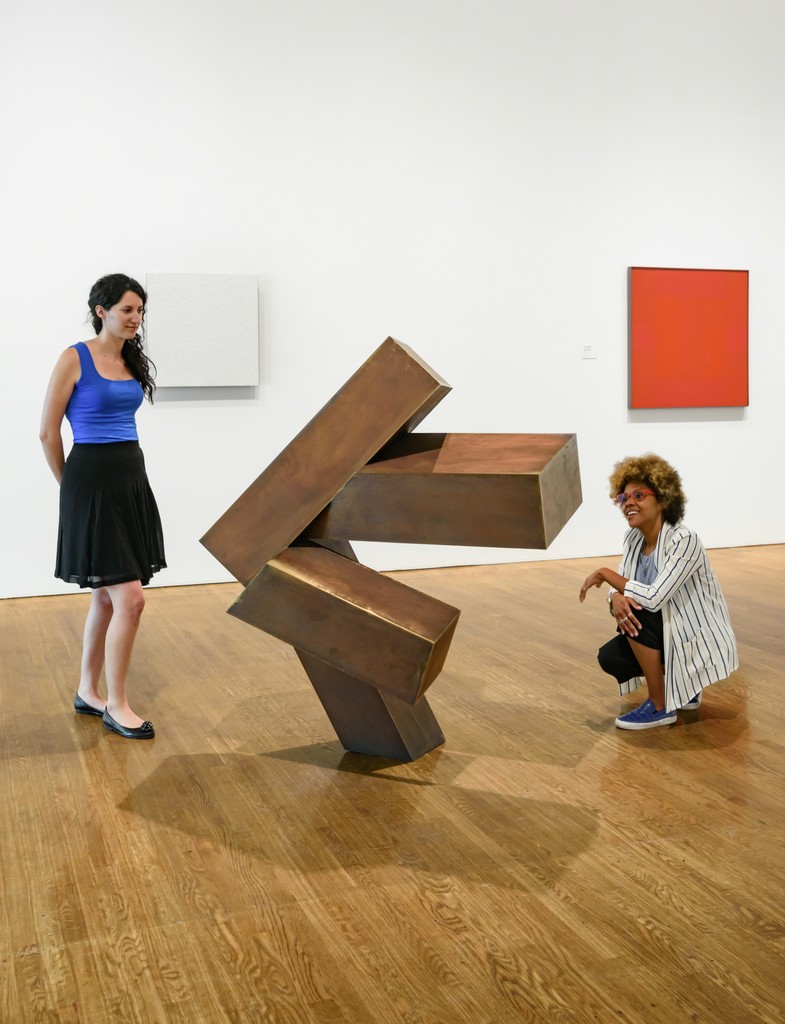 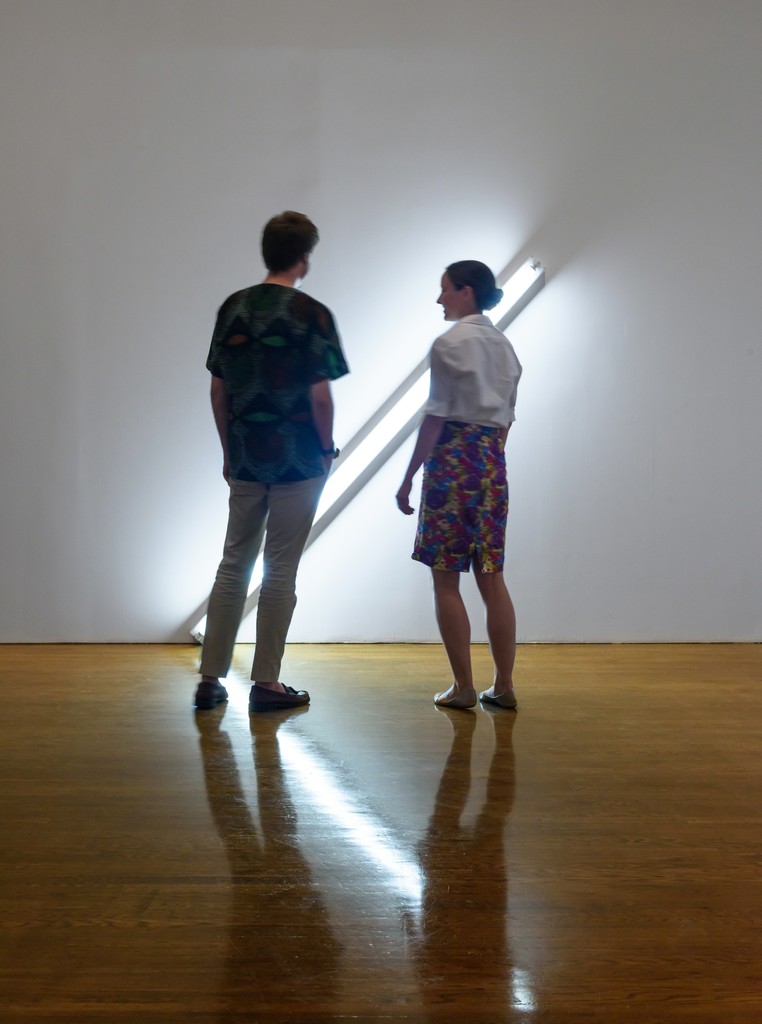 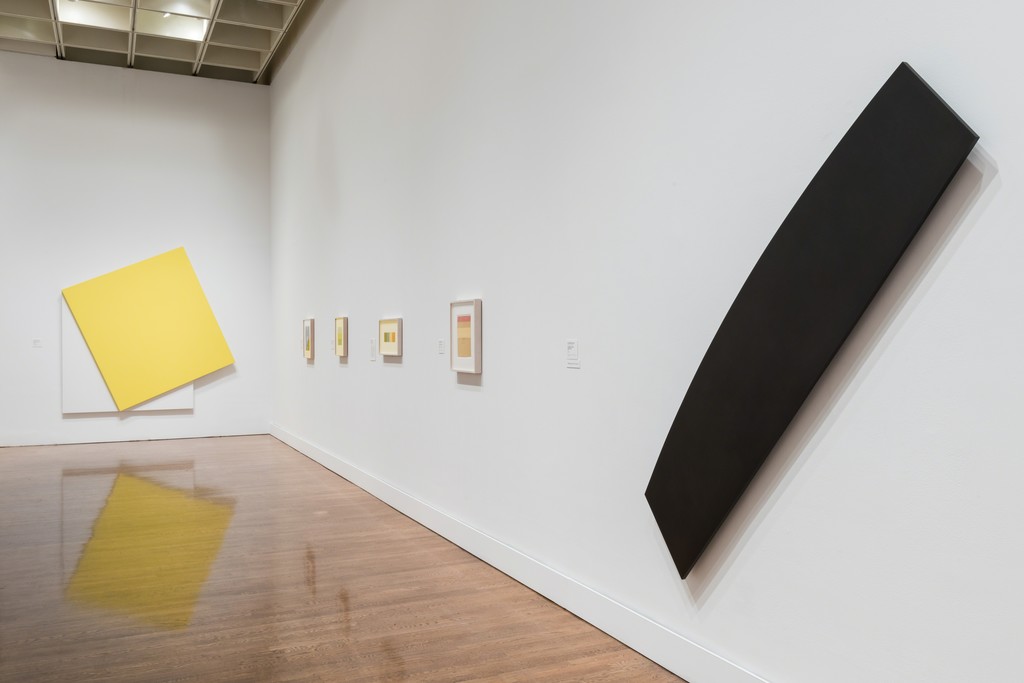 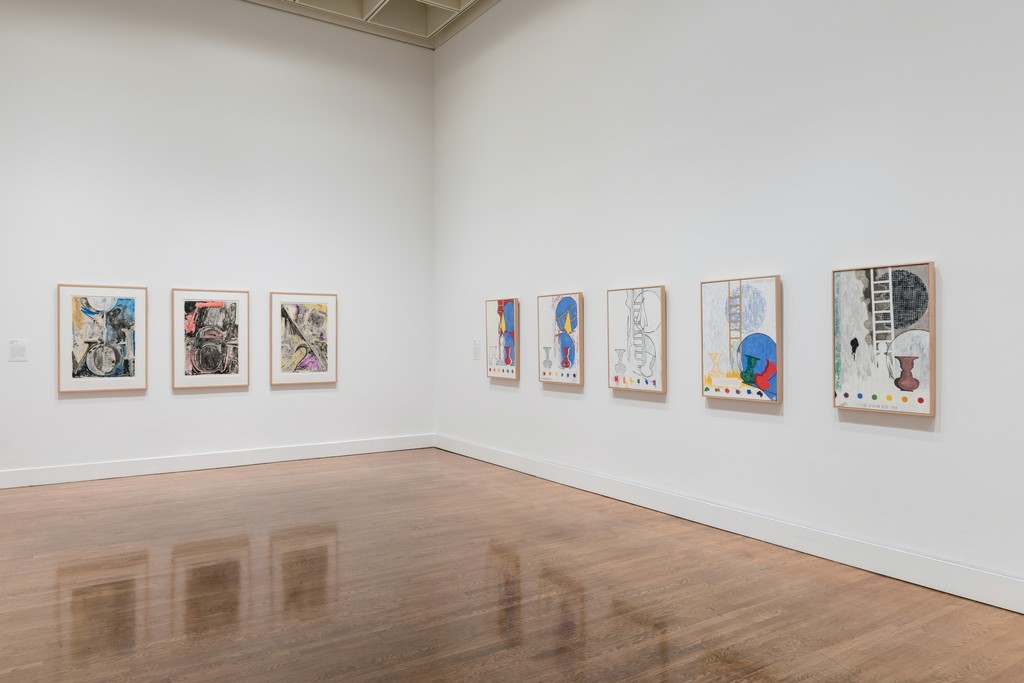 Timothy Rub, The George D. Widener Director and Chief Executive Officer, stated: “We are delighted to present the collection assembled with a spirit of adventure and intelligence by Keith and Kathy Sachs over the course of more than four decades. They are not only thoughtful collectors, but also great Philadelphians who love this city and its cultural and educational institutions. To have such a fine collection come to the Museum as a gift is a rare and wonderful thing. It is also transformative, much like the important collections of modern art that came to us in the early 1950s from Albert E. Gallatin and Louise and Walter Arensberg. Keith and Kathy’s promised gift to the Museum of more than 90 works, which we announced to the public in 2014, has immensely strengthened our holdings of contemporary art.”

Embracing the Contemporary presents a selection of about one hundred works from the Sachs Collection, reflecting Keith and Kathy’s engagement with individual artists and the development of their collecting over time. A number of artists with whom the couple developed meaningful ties over the years are presented in depth, including Jasper Johns, Ellsworth Kelly, and Brice Marden. Among the works by Johns are a recent suite of paintings entitled Five Postcards (2011), and Nines (2006), an assemblage featuring the late 1960’s flagstone motif painted in red, yellow and blue, as well as Voice II (1982), a three-part, ink-on-plastic drawing. Other works in the collection complement the Museum’s holdings of works by leading German artists such as Georg Baselitz, Anselm Kiefer, and Gerhard Richter.

The exhibition reflects the variety and range of interests that distinguish the Sachs collection. It includes, for example, a work on paper by the Pennsylvania-born Abstract Expressionist painter Franz Kline, Untitled (c. 1956), which was among the couple’s first purchases after they married in 1969. Also on view is the earliest work to enter their collection, Portrait of Jean-Louis (1947-49) by Louise Bourgeois, and one of the most recent, Untitled (2000-2013) by Peter Fischli and David Weiss, as well as major works by Robert Gober, Richard Hamilton, Robert Ryman, and Terry Winters.

At the heart of the exhibition is Boy with Frog (2008) by Charles Ray. The oversized nude figure extends his arm and holds aloft a captured amphibian, regarding it with a mixture of fascination and bewilderment that can be considered a metaphor for discovery. Among the large-scale photographs in the Sachs Collection are exceptional works by Andreas Gursky, Candida Höfer, Clifford Ross, Thomas Ruff, Thomas Struth, and Jeff Wall. Important examples of video and film work by such celebrated figures as Francis Alÿs, Pierre Huyghe, and Steve McQueen will be presented. Also included are artist’s portfolios, personal mementos, letters, photographs, and other items that document the history of the Sachs Collection.

The exhibition continues in the contemporary galleries of the Modern and Contemporary wing, recently named for Keith and Katherine Sachs. In this section of the exhibition, works from the collection are interspersed with holdings of the Museum, highlighting the ways in which the gifts and promised gifts both complement and strengthen the Museum’s collection of contemporary art.

Carlos Basualdo, The Keith L. and Katherine Sachs Senior Curator of Contemporary Art, said: “The Sachs Collection contains works that reflect some of the most daring developments in contemporary art over the past few decades, and a vision that is deeply personal and grounded in Keith and Kathy’s admiration for the artists whose work they collect. Their commitment to the work of living artists is what makes this collection so remarkable.”

Publication
An illustrated publication accompanies the exhibition, edited by Carlos Basualdo, the organizing curator, with Anna Mecugni, Exhibition Assistant. It is co-published by the Philadelphia Museum of Art, in association with Yale University Press. The book features nearly 80 entries on individual artists, with essays by distinguished art historians and curators devoted to artists whose work Keith and Kathy Sachs have collected more in depth. The introductory essay by Carlos Basualdo will situate the Sachs Collection gift within the Museum’s history of collecting contemporary art. A statement by the couple and an interview with them will offer insights into their personal history of collecting and illuminate their lifelong relationship with the Museum.

About the collectors
Keith and Katherine Sachs have been supporters of the Philadelphia Museum of Art since the 1970s. Katherine Sachs has contributed scholarship to numerous Museum exhibitions organized by the Department of European Painting before 1900, including Cézanne (1996), Van Gogh Face to Face: Portraits (2000), and Cézanne and Beyond (2009), for which she served as co-curator.

A Trustee of the Museum since 1988, Keith Sachs serves as chair of the Museum’s Contemporary Art Committee and has been active as Chair or Vice Chair on Trustee committees including Architecture and Facilities, Collections, and Executive. He is the former CEO of Saxco International LLC, a principal distributor of packaging material to producers of alcoholic beverages in North America. In addition to their commitment to the Museum, the couple has been active in supporting contemporary art in Philadelphia. Keith Sachs served as chair of the Board of Overseers at the University of Pennsylvania’s School of Design, and Katherine Sachs is an Emeritus Trustee of the University of Pennsylvania and serves on the Board of Overseers of the University’s Institute of Contemporary Art, where she was Chair for ten years. At Penn the couple endowed The Keith L. and Katherine Sachs Professor of Contemporary Art, The Visiting Professor in the Fine Arts at Penn Design, The Sachs Guest Curator Program at the ICA, and The Sachs Fine Arts Program Fund.

Modern Art at the Philadelphia Museum of Art
The Museum’s twentieth-century holdings represent an especially close collaboration between artists and collectors. At the core are the Albert E. Gallatin and Louise and Walter Arensberg collections. Both were among the most significant collections of contemporary art formed during the 1920s and 1930s in the United States. These gifts determined the nature of the Museum’s collection as one especially rich in concentrations of work by particular artists, such as Marcel Duchamp, Pablo Picasso, Constantin Brancusi, and Joan Miró. Gallatin, an artist as well as a collector, was a central figure in the American Abstract Artists Group in New York, where his collection was on view as the “Gallery of Living Art” before it was transferred to Philadelphia in 1943. The Arensbergs formed their collection over the course of four decades with the assistance of Duchamp. The Museum is now home to the world’s most important collection of Duchamp’s work, much of it assembled by the Arensbergs.