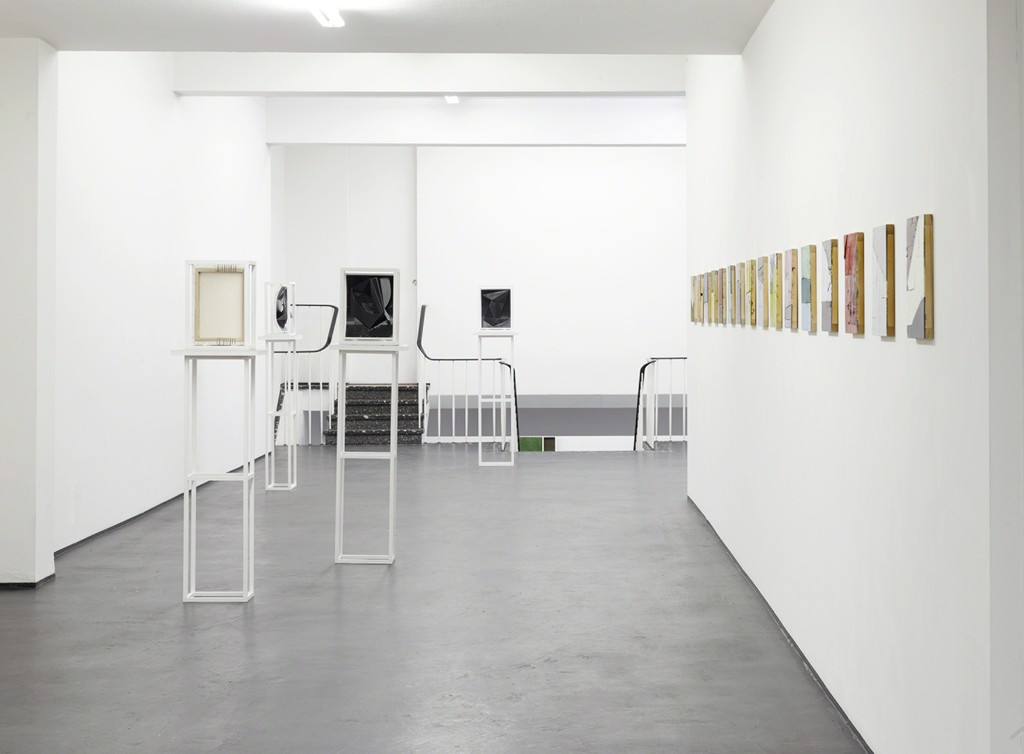 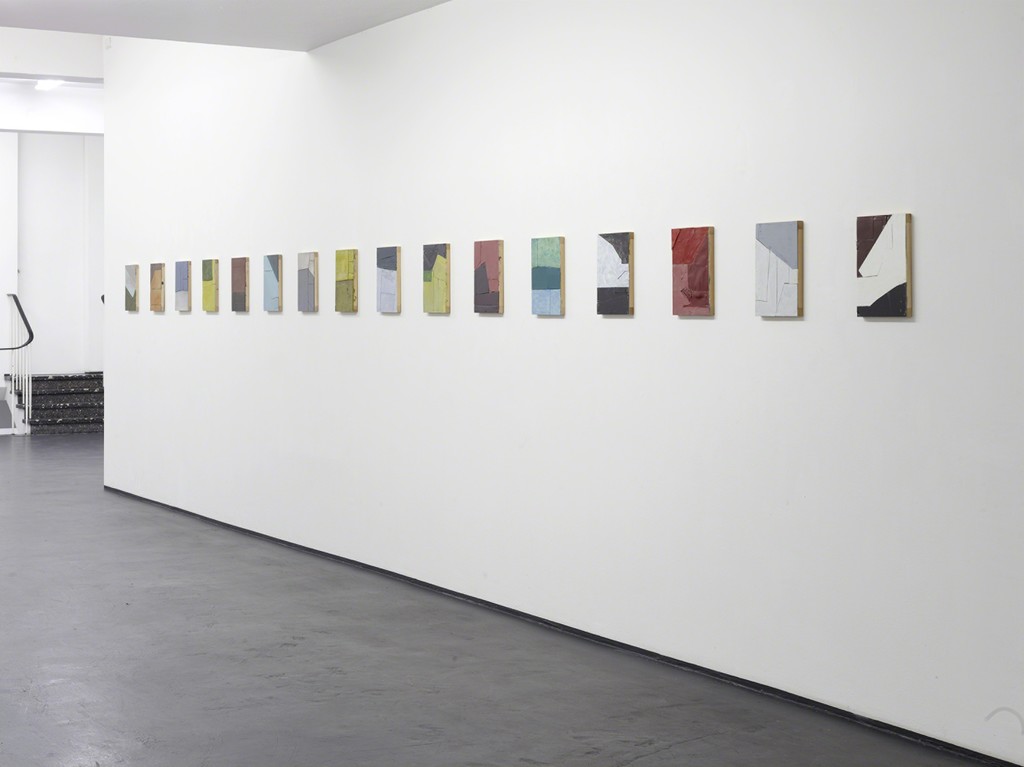 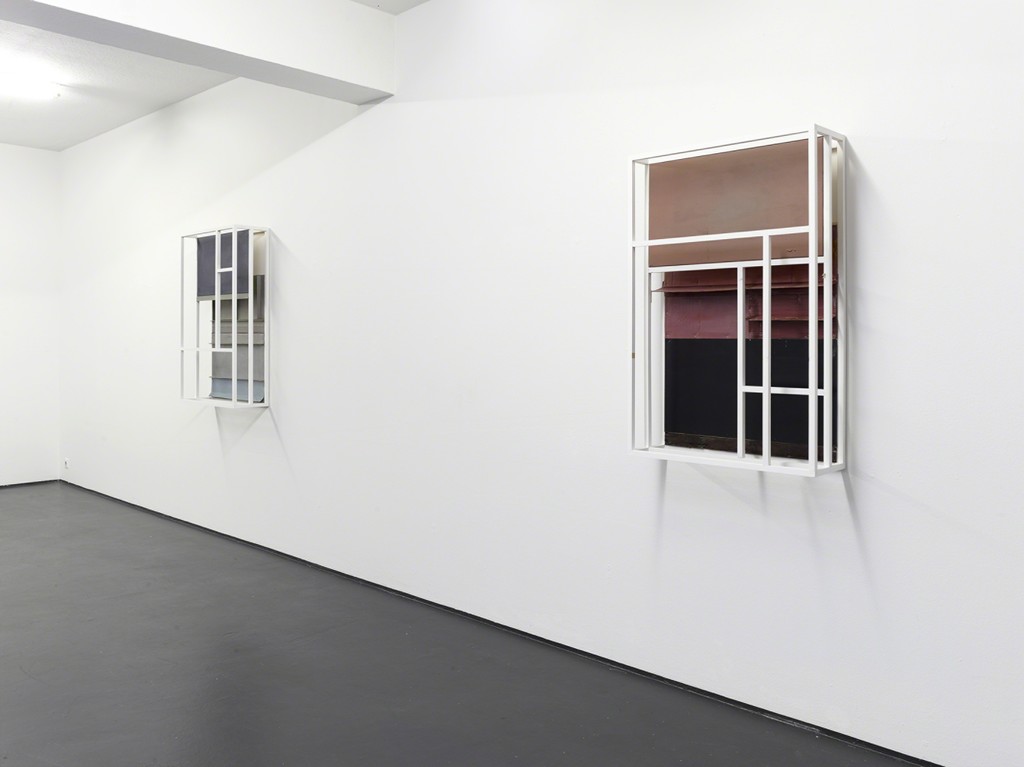 Affinities are naturally characteristic for every artist's œuvre. It only has to be defined how evident these affinities are or how intense one has to search for them. However, to talk about Affinities in the context of Florian Schmidt's work, that we show for the first time in a solo exhibition in Cologne, still makes sense. Because with the particular pos-tu¬lation of a close relation between the works the viewer is asked to understand the dif-ferences between the different groups of work and to look actively for communities (ano-ther title that play a role in Schmidt's world) and thus to understand that his œuvre is governed by a conceptual basis that materializes in very different ways.

"Materialization" is a catchword that is worth to be taken up. The group of works that are indeed titled Untitled(Community) consists of 16 small "paintings"/"images". They have been done since 2010 and can be seen as the minimized essence of what constitutes the works by Florian Schmidt (born in 1980 in Raabs/Thaya, Austria). All elements that condition his œuvre are contained in these pieces. Part of this is the question whether one can talk of paintings or images. Because they are neither depictions of something, nor are they painted canvases (and thus differing from sculptures). They are rather two-dimensional compositions of elements of cardboard that have been applied on a wooden frame. The size of these works is the smallest that Schmidt considers feasible for compo-sing a functioning work. The shape of the first piece of cardboard used for one of these works – normally left overs that are the result of an earlier production process and that are recycled by the artist – defines the shape of the other pieces that constitute the work. If one turns around such a work and takes a look at its back one sees that there is no can¬vas on which the elements have been applied. The elements itself, their material, is constitutive for the resulting object (the "painting") and also for the composition that is, in the end, still considered being painterly. The composition is painterly in the sense that there exist delicate differences of how the color is applied. Sometimes it is a very bold way, rather planar and not structured, sometimes the brush stroke and its different dynamics can be read, and sometimes – mostly in the later works – the translucent color is worked on and taken away with a sponge.

The sculptural works Untitled(Skip) seem to function the other way around: a three-di-men¬sional, very clearly, almost geometrically structured construction of white wooden slats creates a base and a frame for an image that spreads out in three dimensions. This image, consisting of a standard frame from an artist supply store, again in very small size. This frame would never be used by Schmidt without trans¬for¬ming it. He cut it on its back side several times, bend it and creates a sphere that is used as a base for a con-struc¬tion of black cardboard that somewhat resembles sculptures by the Russian artist Naum Gabo or the Merz-Bau by Kurt Schwitters. In the same time, this construction sug¬¬gests faces, which certainly also has to do with its portrait format. A slight narrative and figurative element comes up. The cardboard used for these pieces has, however, not been treated besides having been cut.

Figuration is the keywork for Untitled(Digue)14. Its color cannot be clearly defined. Its form is inspired by piers and the water, that Schmidt could experience when he lived in Marseille as the recipient of a residence program in 2013. The clash of the soft, adap¬ta-ble forms and the hard elements where interesting for Schmidt who can – by the way – be called an analyst of material. And again, the material that Schmidt found amongst his al¬most inexhaustible supply in his studio plays an important role. That is evidently true for the wooden elements, the frame that create the "piers". But that is also true for the wood shavings that have been collected by Schmidt over the years and that have been mixed with pigments. The color itself is the result of a multiplicity of layers of color pigments dissolved with large amounts of water. Thus, normally unrelated tones shim-mer through the last layer and create the oscillation between blue and violet.

This year has brought up the group Untitled(Concurrent). The works of this group com-bine paintings, color composition and a multiplicity of layers in different tones with a spa¬tial structure. Schmidt has used an ordinary, monochrome canvas for creating a com-plex set of relations of frontally seen planes that can be seen also as spatial elements. The color space thus created asks the viewer to take a very close look. Only under this condition the different layers in the space can be discerned.

One more property of Schmidt's works can be exemplified very well when one looks at Immunity. Because also this work, as many others of his œuvre, can be imagined as being an endless composition, as expanding endlessly into space.

For more information and/or images please call the gallery.