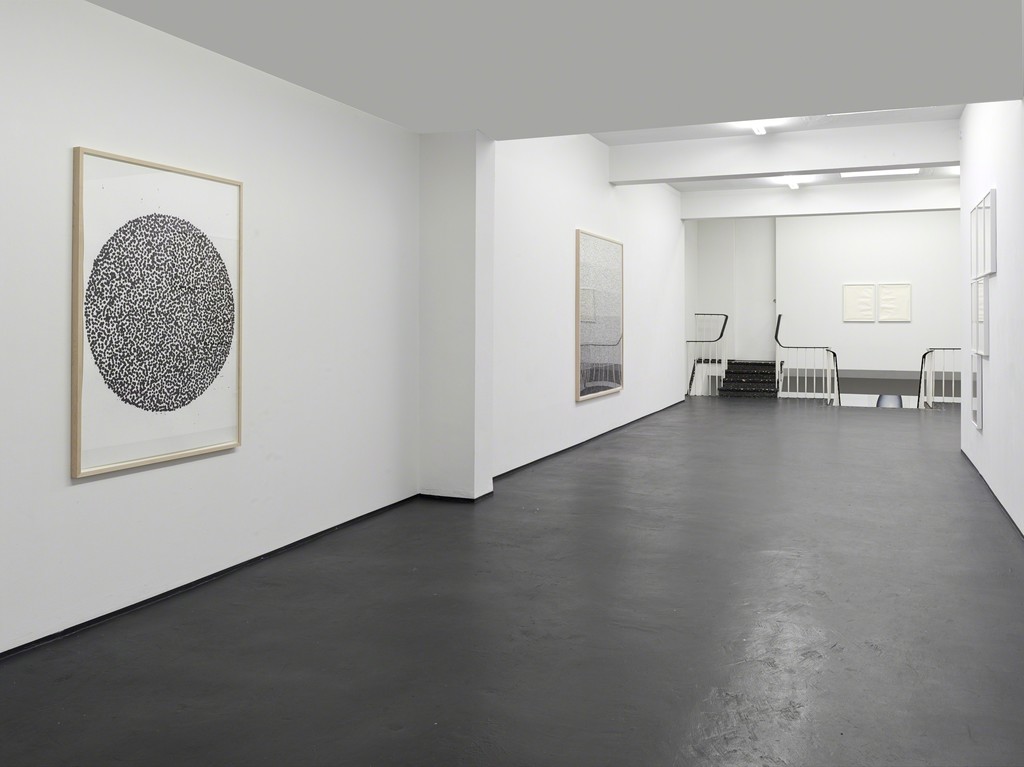 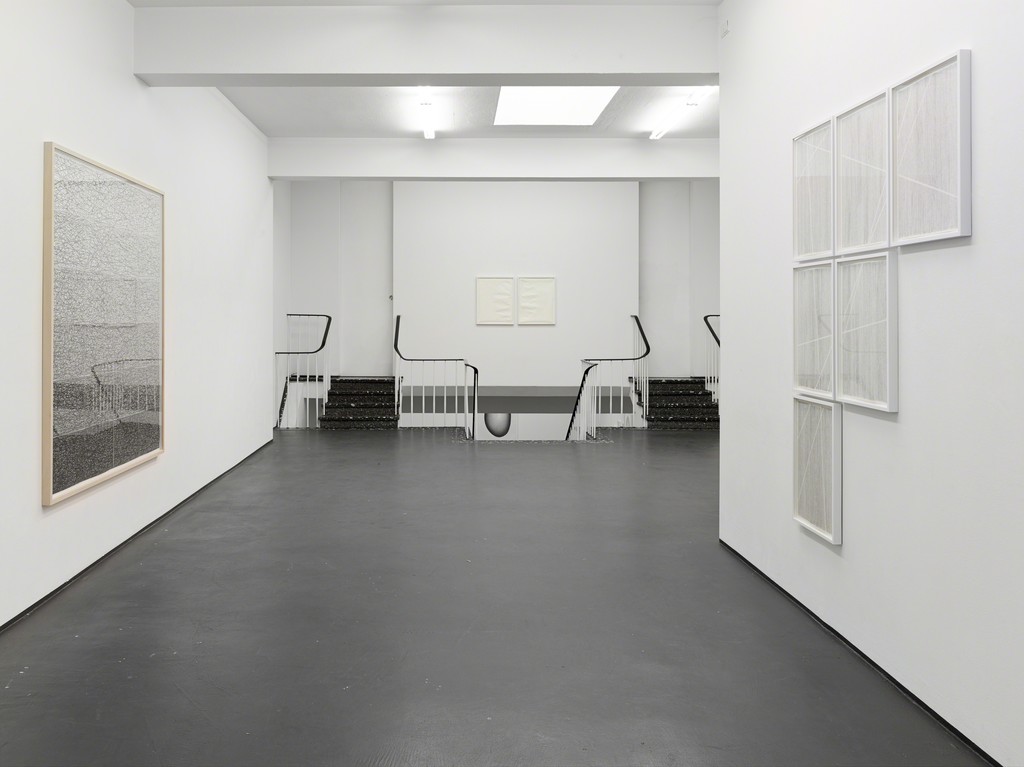 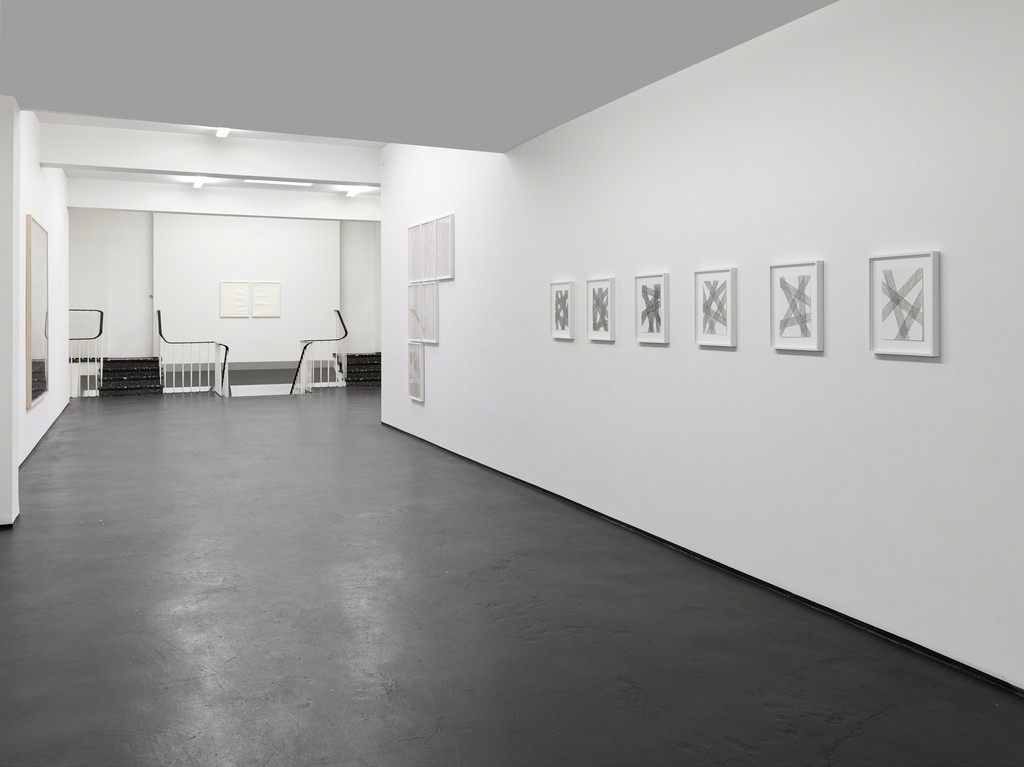 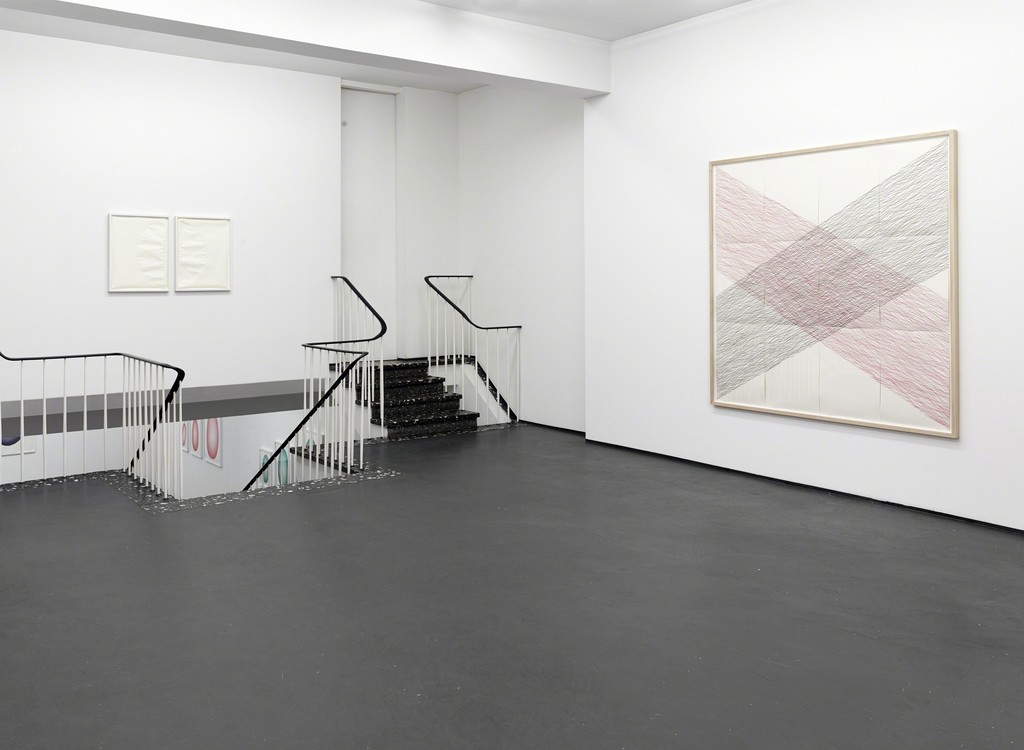 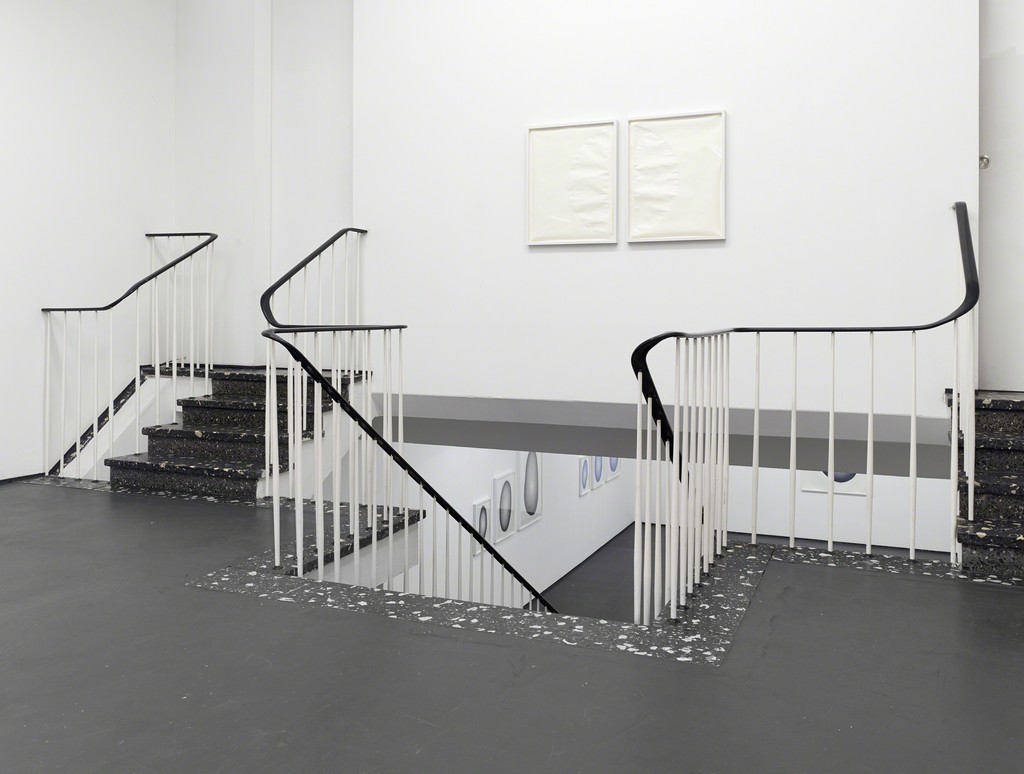 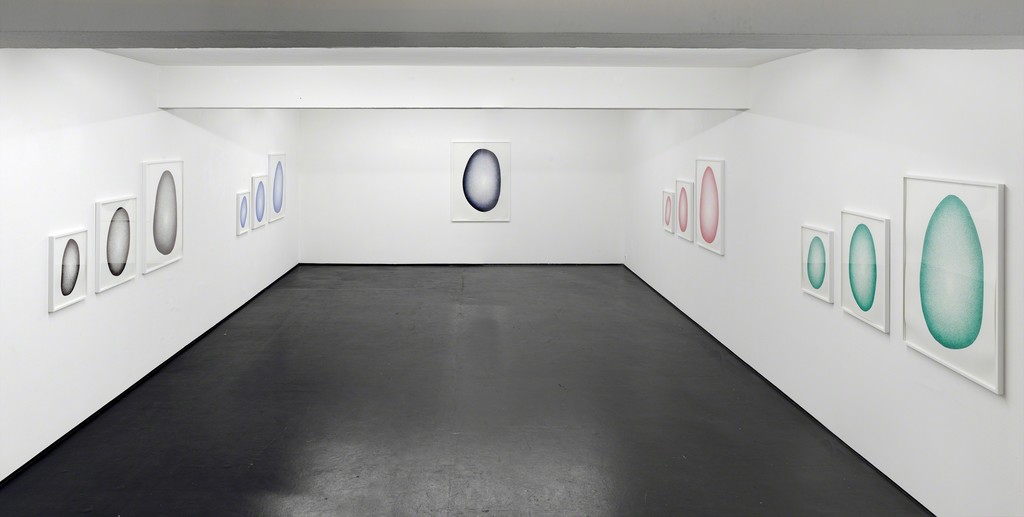 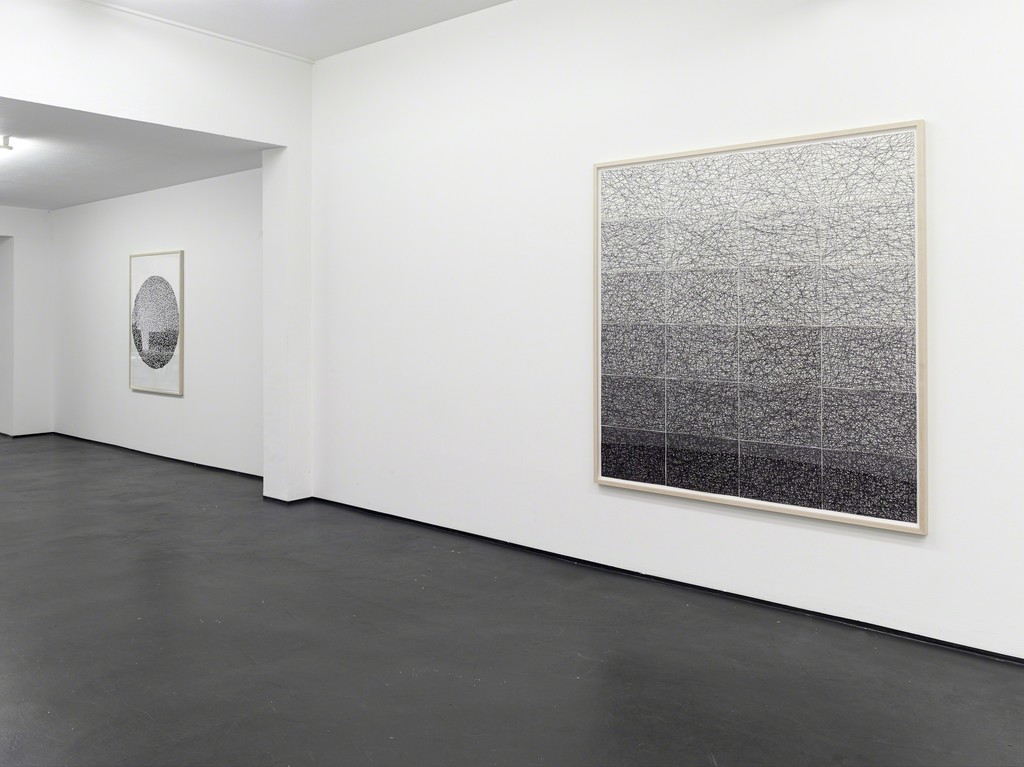 We are proud to inaugurate on April 11 at 7 pm the first solo exhibition of Ignacio Uriarte (*1973, Krefeld) in Cologne.

Language, characters, types, semantic systems, words, and texts are a regular feature in con¬temporary art. In Karlsruhe's Städtische Galerie just ended the large exhibition Zeichen, Sprache, Bilder – Schrift in der Kunst seit den 1960er Jahren, that documented with exam-ples by more than 70 artists how much, but also in how many different approaches artists dealt with this topic.

Writing Drawings, the title of Uriarte’s exhibition, provides already an indication for the sig¬ni-fi¬cance of writing for his œuvre and for this particular exhibition of the German-Spanish ar-tist. If one is looking up the relevant terms in a dictionary, one finds the term "writing" de-fined as: to note characters, ideographs, digits, notes or something similar with a writing uten¬sil in a certain readable order on a pad, normally paper or to type in a personal com¬pu-ter. For the term to "draw" one finds: the procedure of the depiction of an artistic expres-sion.

Considering the works exhibited in the exhibition one realizes, that Uriarte works with se-mio¬tic systems similar to a script. However, different to a script, his works do not aim for rea¬dability in the sense of creating a specific sequence of readable and understandable cha¬racters within a semantic system. He is rather aiming to do drawings that are detectable within their own constituting system in the overall picture of all signs. While the definition of the dictionary refers to the readability of the sequences of characters, Uriarte reduces his wri¬ting to registering or typing in repetitively redundant signs of the same system.

In our exhibition each drawing is made according to its own system, which distinguishes it from the other drawings on show. For instance, in the four-part drawing Dot Grid Uriarte shows dots of black ink, which he dropped by hand on four 140 x 100 cm sized sheets of paper in a regular structure of four varying grids. Due to the different side lengths of the rect¬angles on two papers appear patterns of squares in two different sizes and on the other two papers can be seen oblong rectangles, which structure the sheets horizontally respec-tive¬ly vertically.

In the work Linealstrichstrukturverlauf a set of 24 sheets of paper in one frame with black lines drawn with a ruler, the dynamic of the series does not evolve by the varying spacing of the individual lines, but by their agglomeration from the upper to the lower parts of the work: While on the upper sheets the single lines are recognizable as such, they agglomerate in the lower parts to an almost closed, monochromatic field. Through this agglomeration the ori¬gi-nal sign of the straight line looses progressively it’s primal quality as a structuring form.

With these examples it might be comprehensible, that the lack of meaning of the single signs guides the focus of our observation away from the understanding of a combination of signs towards the process of their origination or – put another way – towards the temporal and somatic relation of the author and the drawing. Each line drawn by hand is above all a proof of a conscious or unconscious act within the process of time. Especially drawings in which individual signs are repeated suggest a certain relation to temporality. Repetitive signs are readily understood – especially if they are not defined – as subjective units of time. Like the Count of Montechristo was counting the days in his cell by drawing lines on the wall.

If you look to the two sets of drawings described from this point of view, the regular drip-ping of the drops of ink in Dot Grid can be described as an expansive, temporal structure. Opposite to this the agglomeration of lines in Linealstrichstrukturverlauf describes rather an accumulation of time units without spatial expanse, with which one can also describe the ac¬cumulation of time unites within subjective memory.

Apart from the readability of a drawing as a temporal structure, each drawing is in general related to the body of the author. While an abstract line like in Linealstrichstrukturverlauf is read initially as a trace of an abstract physical act, in quite a few of his works Uriarte uses signs, that are immediately related to his body.

This relation becomes particularly visible in the two Handgelenkszeichnungen of 2012, in which approx. 7 cm long curves spread out in parallel lines from above to the bottom of two sheets of paper. The slight bending of the line is a result of the natural movement of the wrist, when the hand drawing the lines lies on the paper.
Another example for the somatic legibility of his drawings is the Dot Circle, which will be al-so on view in our exhibition in Cologne: here Uriarte dripped a circle of ink drops in varying sizes on a sheet of paper of 140 x 100 cm. One can draw inferences from the varying dia-me¬ter of the drops to the physical distance of the artist to the surface of the paper.

Uriarte got known to a wider public by using utensils from the banal world of our daily office life. By re¬¬peating casual gestures and by decontextualizing the used materials he generates works that refer formal- and content-wise to the Minimal and Conceptual Art of the '60s and '70s.

Apart from drawings Uriarte works in videos, sound pieces, and installations. In the last years he was shown internationally in numerous solo and group exhibitions. His works were ac¬quired by many public institutions like in Germany the collection of the Berlinische Galerie, Berlin, Kupferstich Kabinett der Stiftung Preußischer Kulturbesitz, Berlin, Städtische Galerie im Lenbachhaus in Munich and Museum Ludwig in Cologne. Currently his work is on display at the Lenbachhaus in Munich in the groupshow Playtime and on May 3, 2014, during the Gallery Weekend, the Berlinische Galerie in Berlin presents his newest sound-piece.

For more information and / or images please contact the gallery.