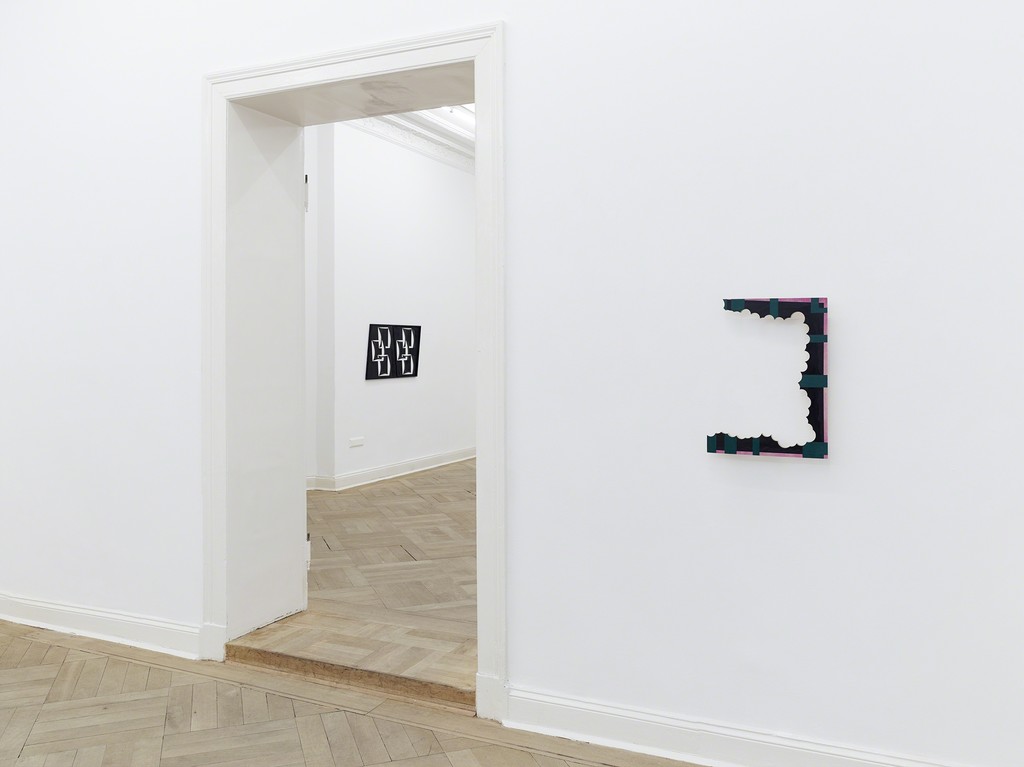 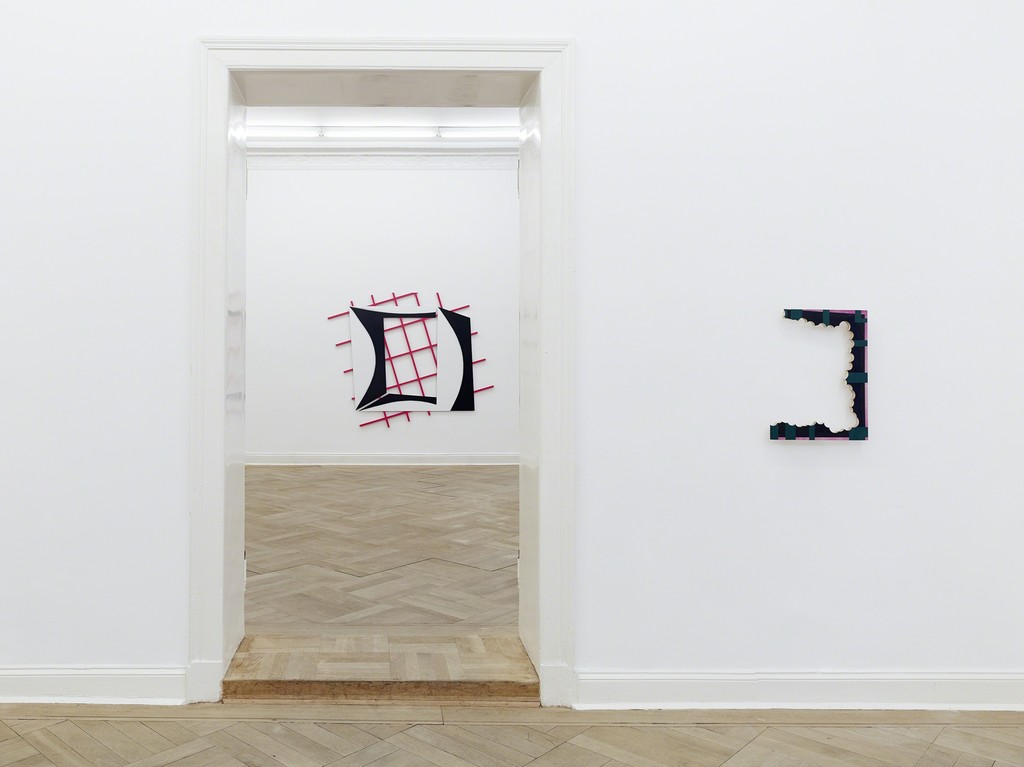 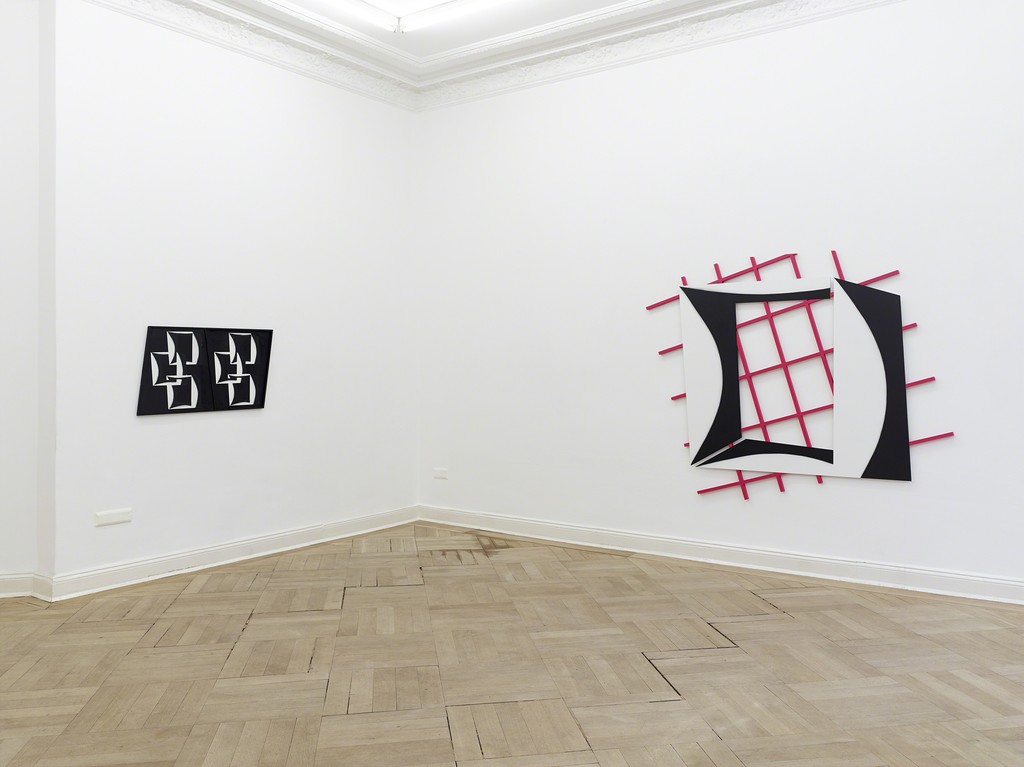 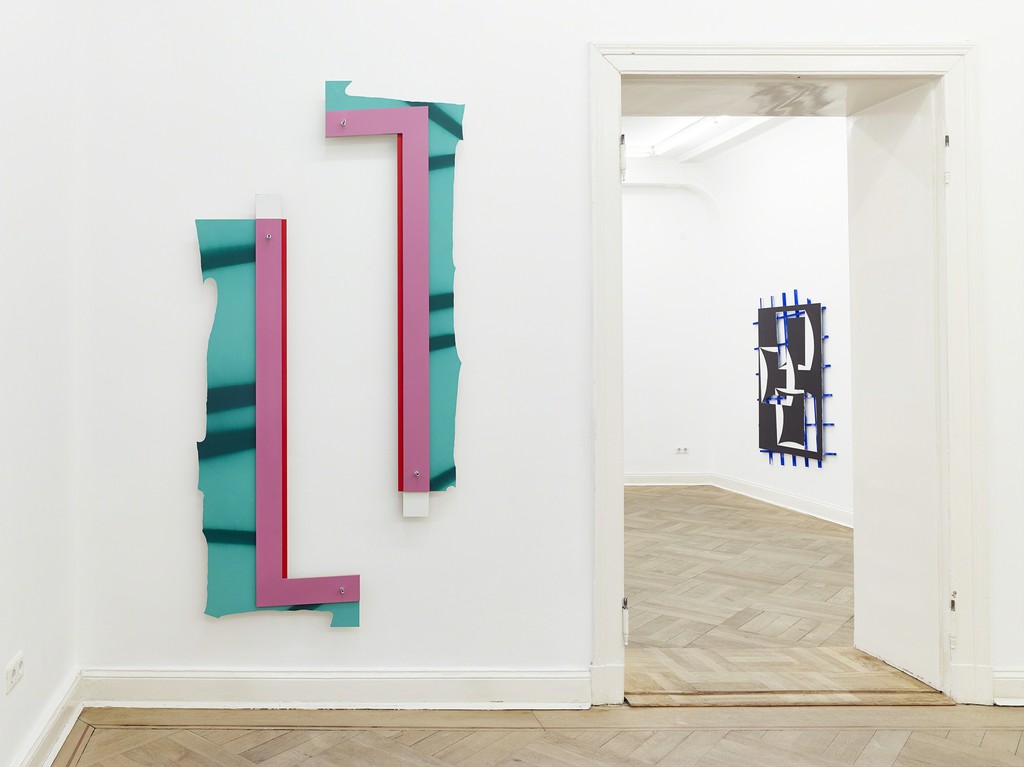 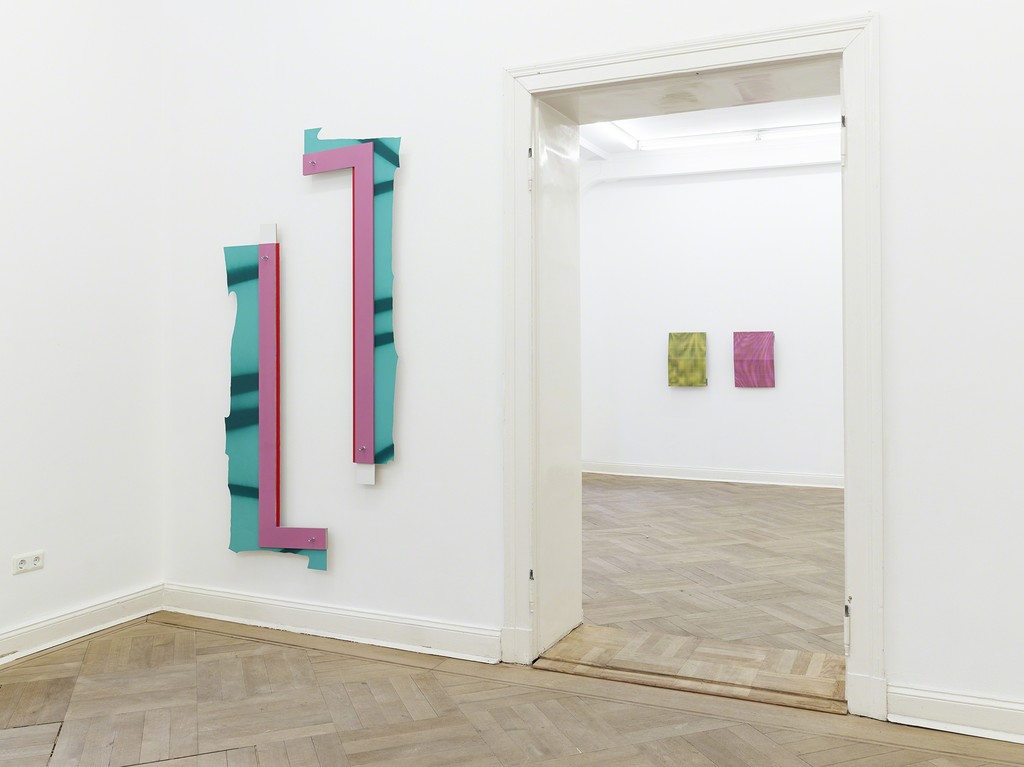 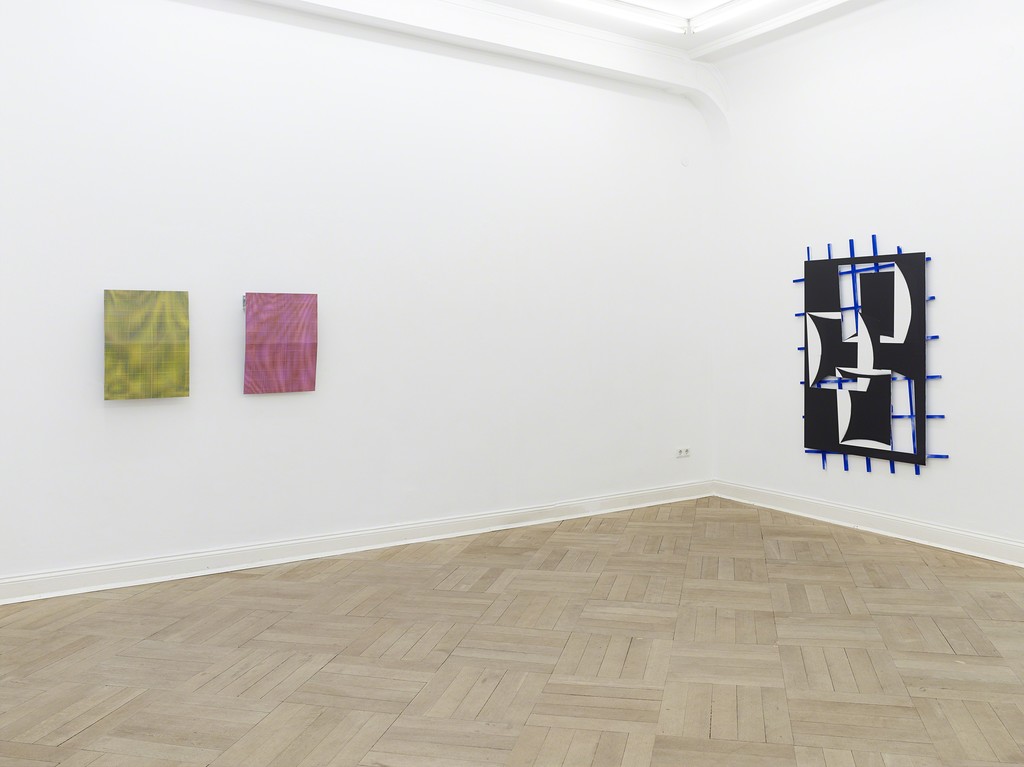 We are proud to inaugurate on May 2, 2014 at 6.00 pm Plural, our first single exhibition in Berlin with Jonas Maas (born 1985, Trier, lives and works in Düsseldorf). Maas chose the show's title con¬¬sciously, the exhibited "paintings" document the multiplicity of what he understands under the category of pain¬ting. While the classic idea of painting was defined by applying paint, bound by a binder, on a surface with a tool (brush, spattle, roller etc.), Maas is enlarging in a radical way the spectrum of possibilities of what can be subsumed under "painting".
In the first exhibition space Maas shows two UV-prints on aluminum that are mounted to the wall with steel-constructions. A UV-print is a printing method that involves UV-light for the immediate drying pro¬cess after the ink has been applied. The UV-print is characterized by the ability to use it on any kind of smooth material. For instance, it can be printed also on an aluminum plate that is creased in the middle. The picture carrier that is mounted to the wall with a distance of 12 cm is thus not hanging parallel to the wall, but is tilted towards the space.
The image that has been designed on the computer and printed on the surface (that has been primed with acrylic paint) is a conglomerate of different picture-layers. Grids working in opposite directions, pain¬terly and gesture-like sections, and different colors lead to a result that create disorientation in the viewer: the single structures cannot be determined. Maas thus does not use "printing" for the multipli¬ca¬tion of one image, but rather for enlarging the number of painterly possibilities.
One way of enlarging painterly possibilities can be seen also in the two works that show the image – one believes in seeing sails in white on black respectively black on white on HDF (high-density fi¬ber¬board) or alucobond – mounted on, or better: in a wooden grid. The image / plate is not at all following the traditional rectangle (or eventually oval or circle), but is cut in multiple ways, respectively divided. Be¬fore applying this image with spray-paint and varnish, the picture plane was primed with half-chalk ground. The work in the first exhibition space has been executed partly with shining varnish and thus the space around is mirrored and included. Also, the combination of a colored construction (the grid) car¬rying the image (and thus: citing the former stretcher bar) on a mounted picture plane, the place for a painting, that is: the wall, is exceeded. The pictorial space and the real space are interlocked, part of this process is born by the cut HDFs and the cantilevered way the grids are mounted. Whereas an or¬thogonal hanging of the grids would have been able to cater for "order" and orien¬tation (our whole mathe¬matical and geographical system is built upon the idea of vertical and horizontal spaces), the cantilevered way of mounting the grids is playfully negating the traditional viewing habits.
Two more works from the show can be barely understood as painting: in the first exhibition space it is a cut wooden plate of which only three sides are left. The left side as well as the center of what could be called a plate were cut off. The remains are what could be considered a left-over in a carpenter's workshop. However, it is almost excluded that a carpenter would create a plate with similar rounded sides. Thus, the negative cut out is what the relief, mounted with a distance of 3.5 cm to the wall, is: a particular form in itself. It is determined by the negative pictorial space defined by the three remaining sides. In the second space it is the combination of two angles that define a central negative space. The two angles have, as a background, two irregularly cut aluminum-plates. They look as if they could be the image itself whereas the pink angles could be the traditional frame. The whole set is mounted to the wall with a distance of 5 cm. Again, it is a flat construction that is including the real space, a con¬struction that can be read as a relief. Maas, however, is considering it as painting, due to the co¬lors used and the different methods of color application.
Maas' works are distinguished by the way they refer to earlier traditions (and the distortion of these traditions): he is playing a game of references that can be read as the sum of earlier fractions.
For more information and/or images please contact the gallery.