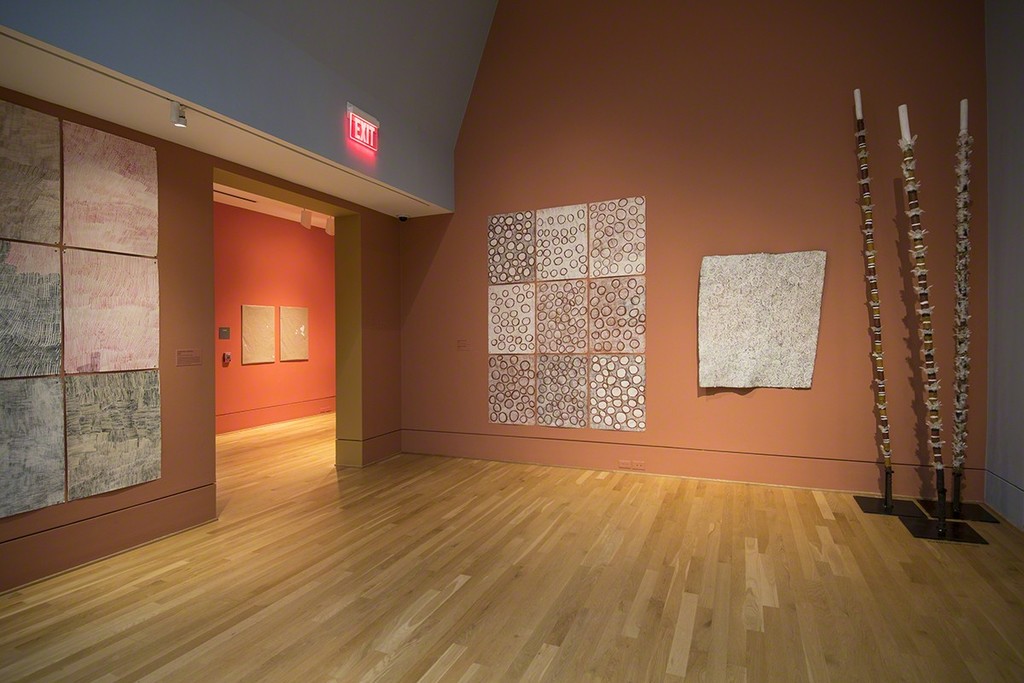 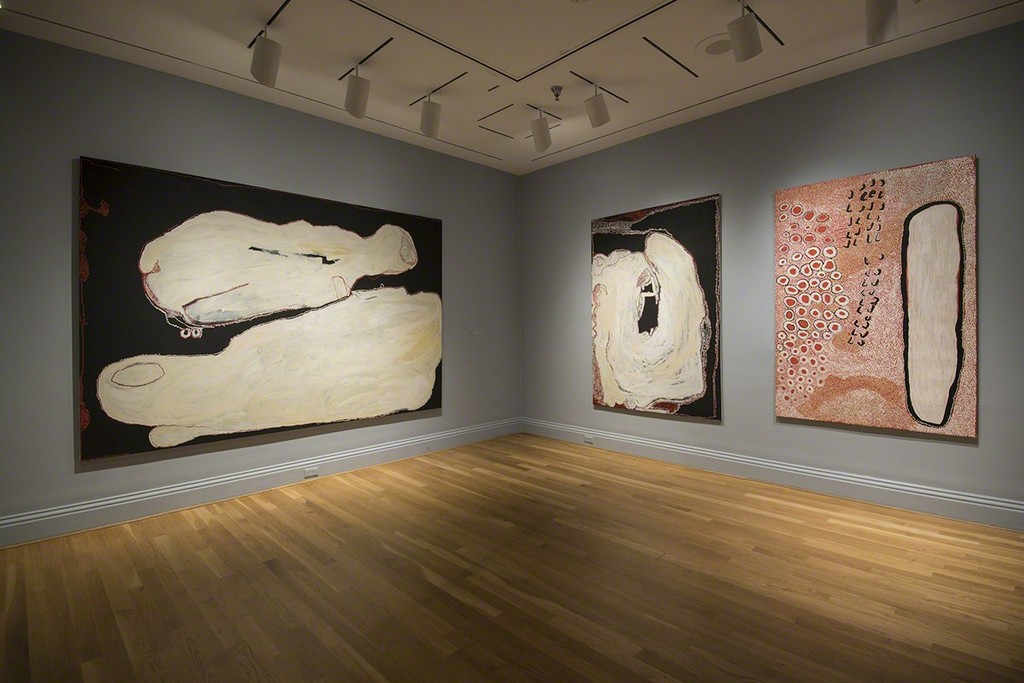 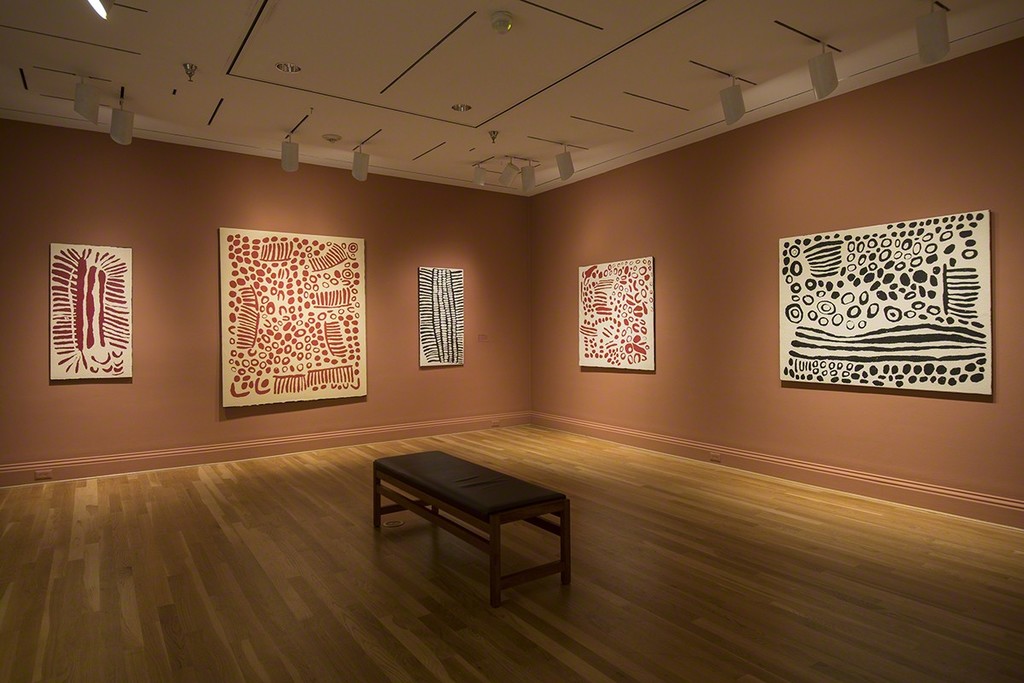 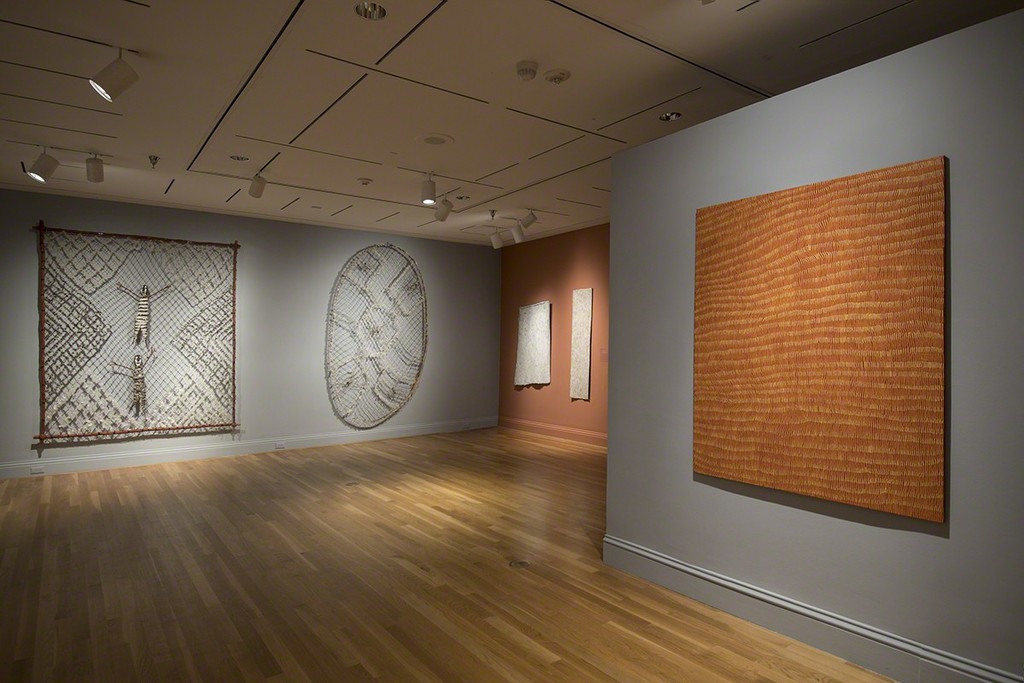 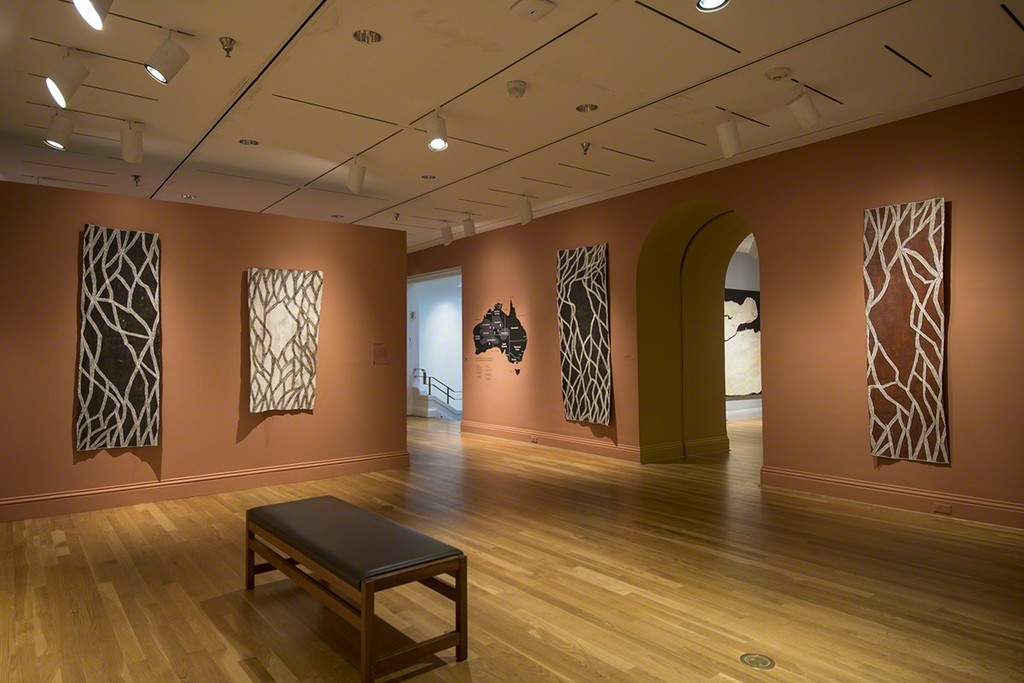 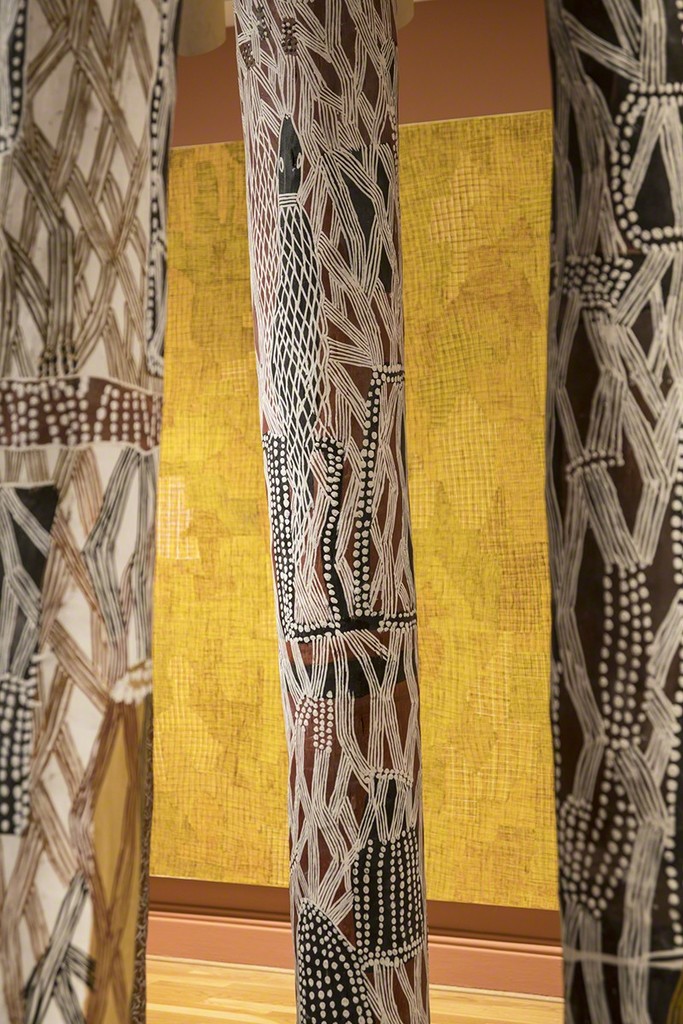 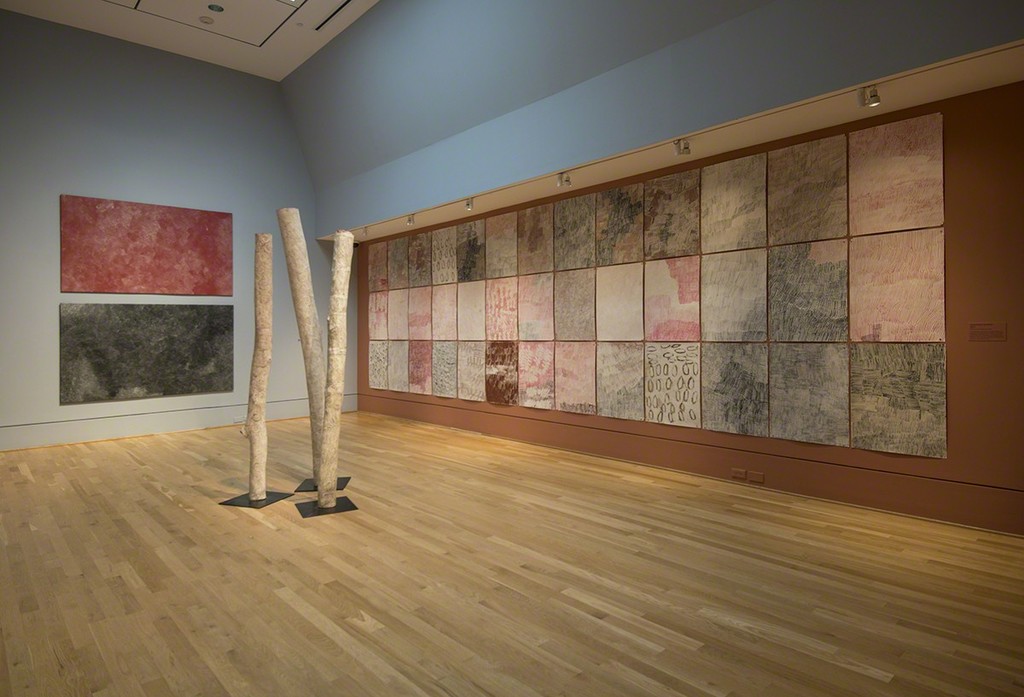 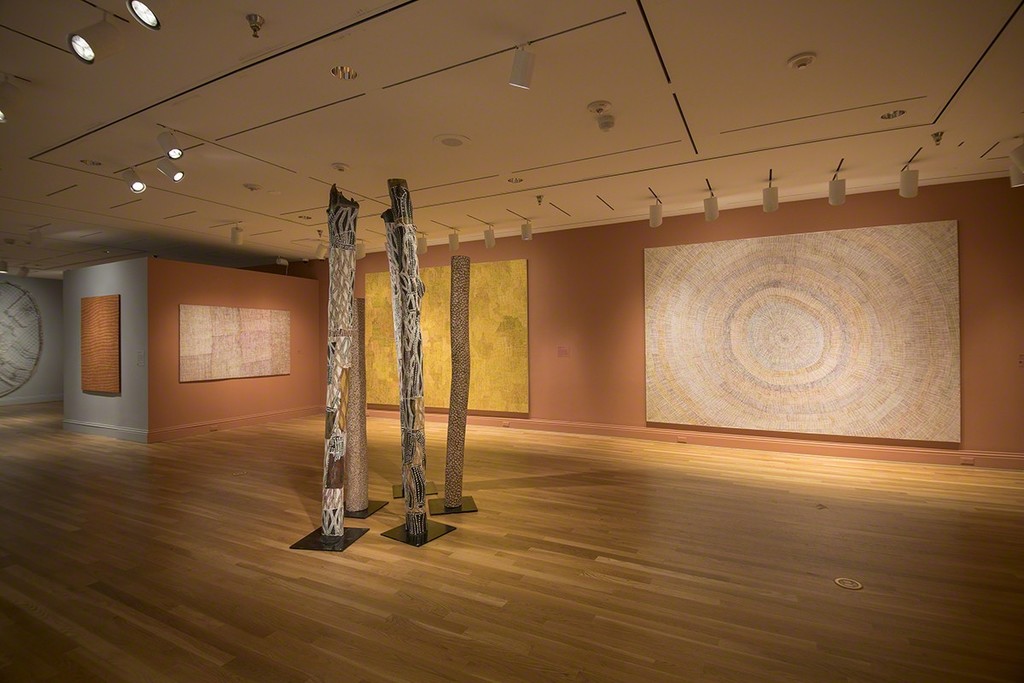 WASHINGTON—The Phillips Collection is proud to present Marking the Infinite: Contemporary Women Artists from Aboriginal Australia. Celebrating Australian Aboriginal culture, the exhibition includes 68 works drawn from the collection of Miami-based collectors and philanthropists Debra and Dennis Scholl with many key works commissioned specifically for the exhibition. Marking the Infinite is carefully curated by the Scholls in conjunction with Australian art historian Henry F. Skerritt and will be on view June 2 through September 9, 2018.

The exhibition features works by nine leading Aboriginal Australian women artists: Nonggirrnga Marawili, Wintjiya Napaltjarri, Yukultji Napangati, Angelina Pwerle, Lena Yarinkura, Gulumbu Yunupingu, Nyapanyapa Yunupingu, Carlene West, and Regina Pilawuk Wilson. The subjects of their art are broad, yet each work is an attempt to grapple with fundamental questions of existence, asking us to slow down and pay attention to the natural world. These are marks made upon an “ancient endless infinity,” revealing humanity’s insignificance against the steady movement of time and the cosmos.

“We are honored to champion Australian Aboriginal art in Washington, DC and to take part in celebrating the historic culture rooted in this exhibition,” said Phillips Director Dorothy Kosinski. “Duncan Phillips was known for being of an international mind. The sense of community and universal language deep within the symbolic nature of Aboriginal art would have resonated with his artistic passions.”

“The Phillips Collection has always been at the forefront of modern and contemporary art which is, in the 21st century, most decidedly a global phenomenon. Aboriginal art is a part of that evolution and we are proud to feature nine artists that are pushing the boundaries of their history to take part in this conversation,” said Klaus Ottmann, Deputy Director for Curatorial and Academic Affairs at the Phillips.

ABORIGINAL AUSTRALIAN ART AND CULTURE
In Aboriginal communities throughout Australia the art markets not only act as the hub of the community but serve as a means for survival. Art production is self-regulated and commercialization is controlled by the community leaders like the nine featured women artists. Testimonies of 40,000 years of culture and history are rooted in Aboriginal art—initially championed by men. Now, women artists have electrified the art scene through their dynamic artistry. The works of these nine leading Aboriginal artists show their life’s journey of upholding the history of their people, while expanding upon their culture through art.

The Phillips Collection is pleased to invite one of the nine artists, Regina Pilawuk Wilson, to travel to the United States and paint a mural in the museum’s courtyard. Wilson was known for her remarkable skill with weaving at a young age. As she continued her education she became an expert in painting with the goal of continuing her people’s traditions in innovative ways.

DEBRA AND DENNIS SCHOLL
Debra and Dennis Scholl have dedicated many of their recent years to collecting art. After discovering Australian Aboriginal art they became infatuated with the communities and the lifestyle surrounding the art market. The Scholl’s progressed from supporting the history of Aboriginal art to impacting the history by commissioning new works of larger scales than had previously been attempted. In 2017, they announced they would donate part of their collections to three museums, Miami’s Patricia & Phillip Frost Art Museum at Florida International University, the Nevada Museum of Art, and the Metropolitan Museum of Art in New York.

EXHIBITION CREDITS
This exhibition is presented by Chevron.
Generous support is provided by Andrea and Steve Strawn and by U.S. Trust and the Embassy of Australia.
Additional support for the presentation at The Phillips Collection was provided by Dennis and Debra Scholl, Charles McKittrick, Jr., and from the Paula Ballo Bailey Memorial Fund.
In-kind support is provided by Farrow & Ball.
Marking the Infinite originated at the Nevada Museum of Art in Reno, Nevada, and was organized by William Fox, Director, Center for Art and Environment, and Henry Skerritt, Curator, Kluge-Ruhe Aboriginal Art Collection of the University of Virginia. The works in the exhibition are drawn from the collection of Debra and Dennis Scholl.

ABOUT THE PHILLIPS COLLECTION
The Phillips Collection, America’s first museum of Modern art, presents one of the world’s most distinguished Impressionist and American Modern art collections. Including paintings by Renoir and Rothko, Bonnard and O'Keeffe, van Gogh, Diebenkorn, Daumier and Lawrence, among others, the museum continues to actively collect new acquisitions, many by contemporary artists such as Wolfgang Laib, Whitfield Lovell, and Leo Villareal. Its distinctive building combines extensive new galleries with the former home of its founder, Duncan Phillips. The Phillips’s impact spreads nationally and internationally through its highly distinguished special exhibitions, programs, and events that catalyze dialogue surrounding continuity between art of the past and present. Among the Phillips’s esteemed programs are its award-winning education programs for K-12 teachers, students, and adults, well established Phillips Music series and sell-out Phillips after 5 events. The museum contributes to the art conversation on a global scale with its events like Conversations with Artists and the International Forum. The Phillips Collection values its community partnerships with The University of Maryland and THEARC that act as the museum’s nexus for academic work, scholarly exchange, and interdisciplinary collaborations. The Phillips Collection is a private, non-government museum, supported primarily by donations.