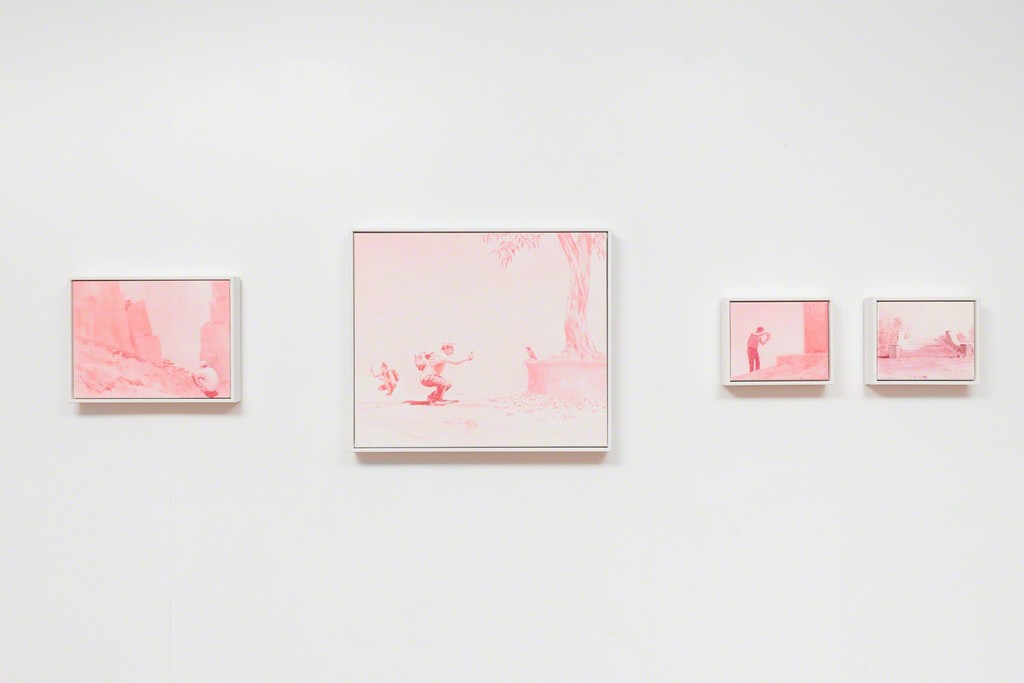 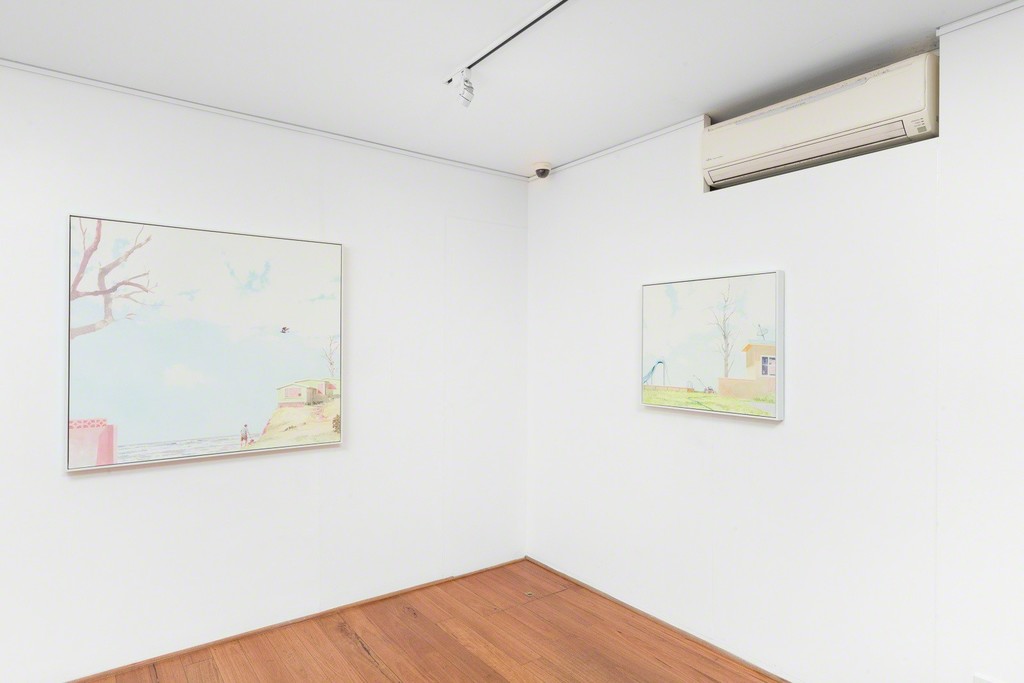 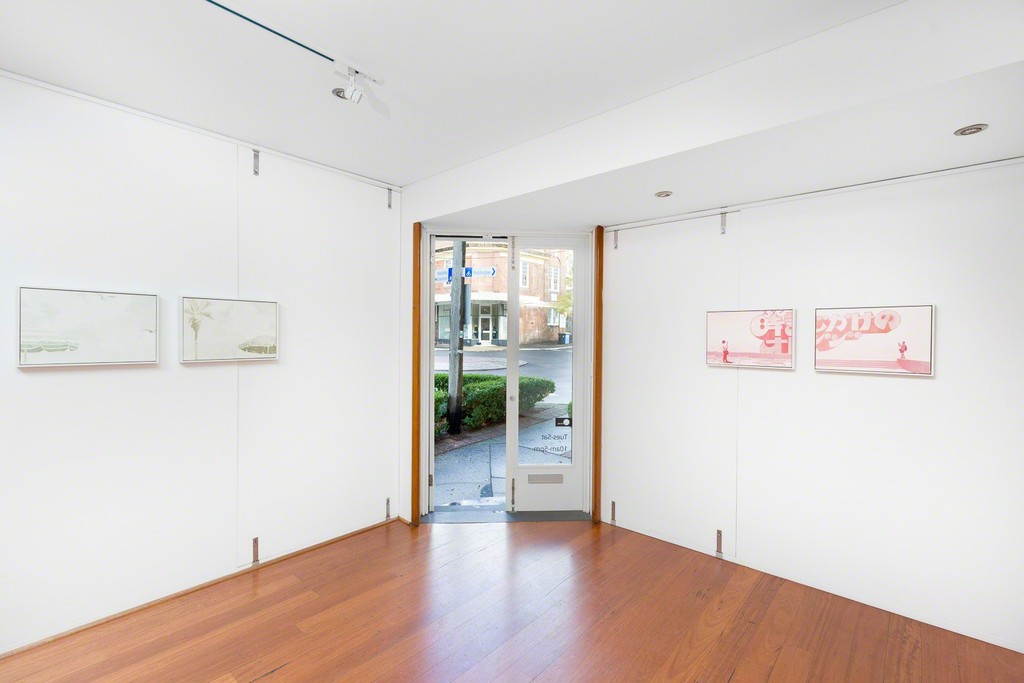 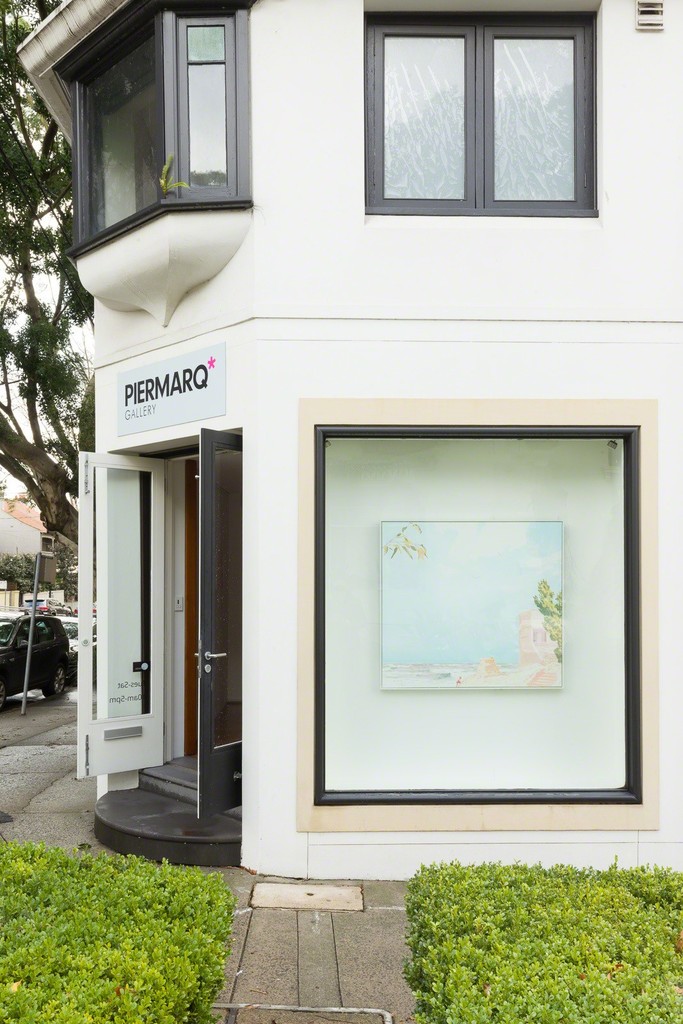 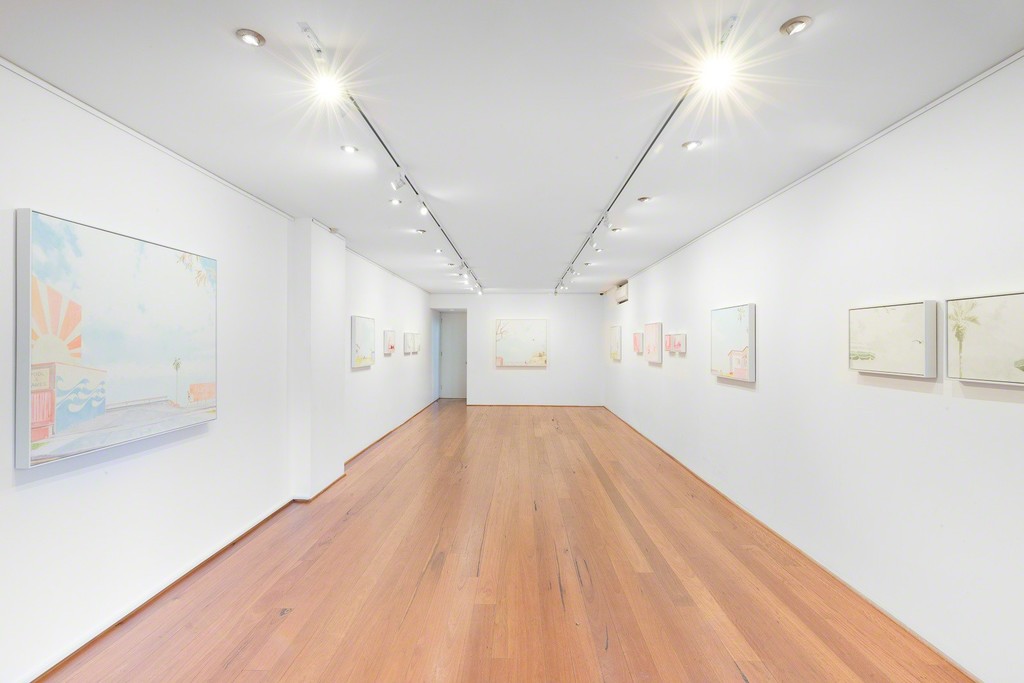 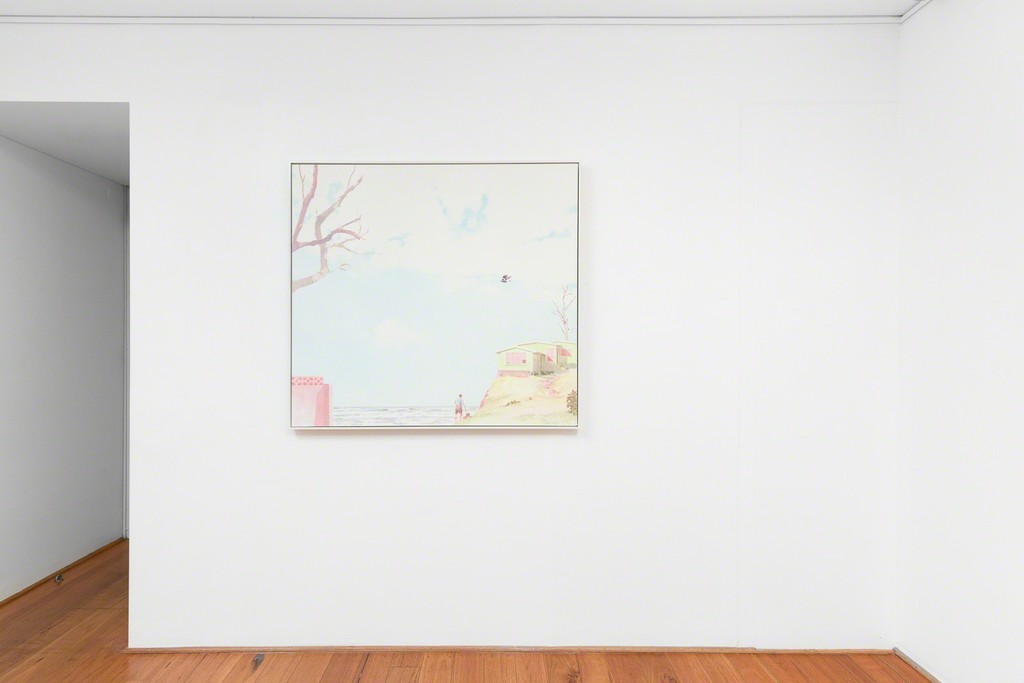 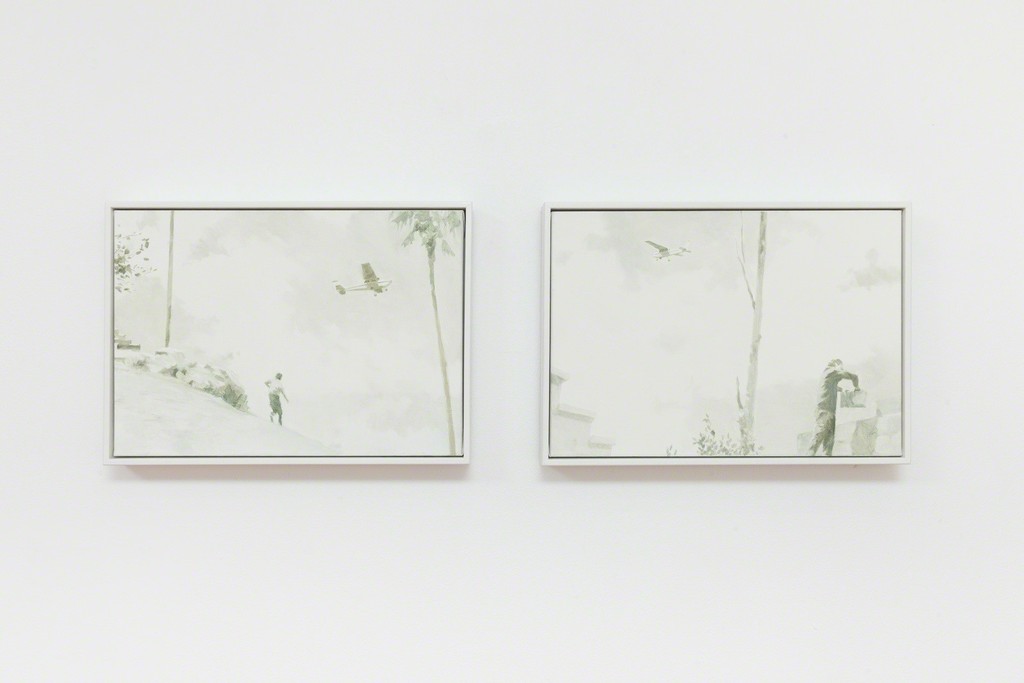 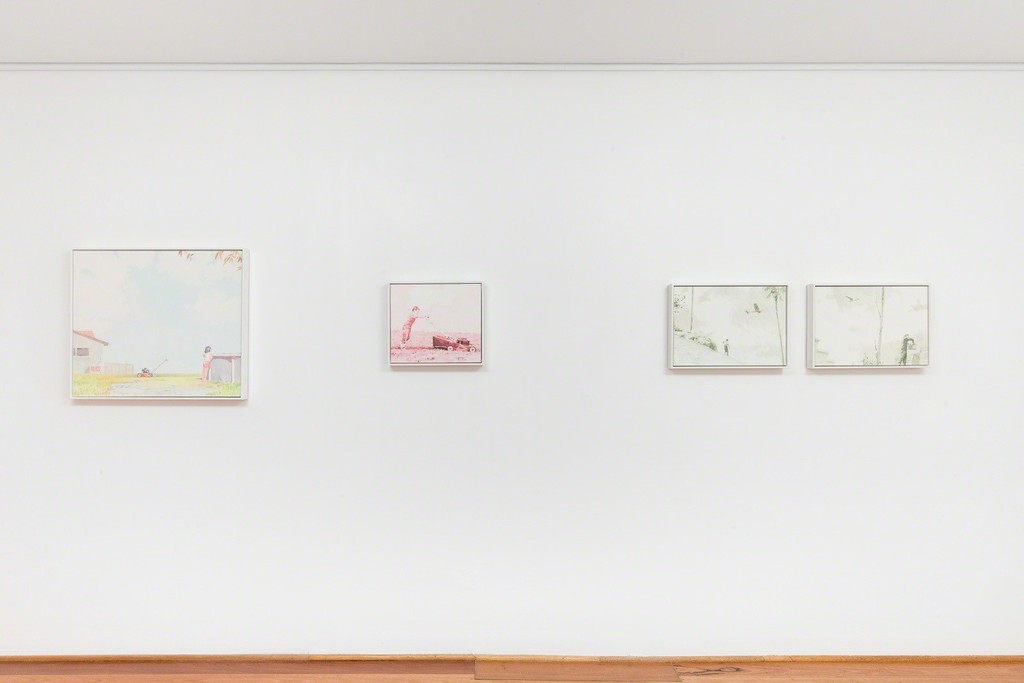 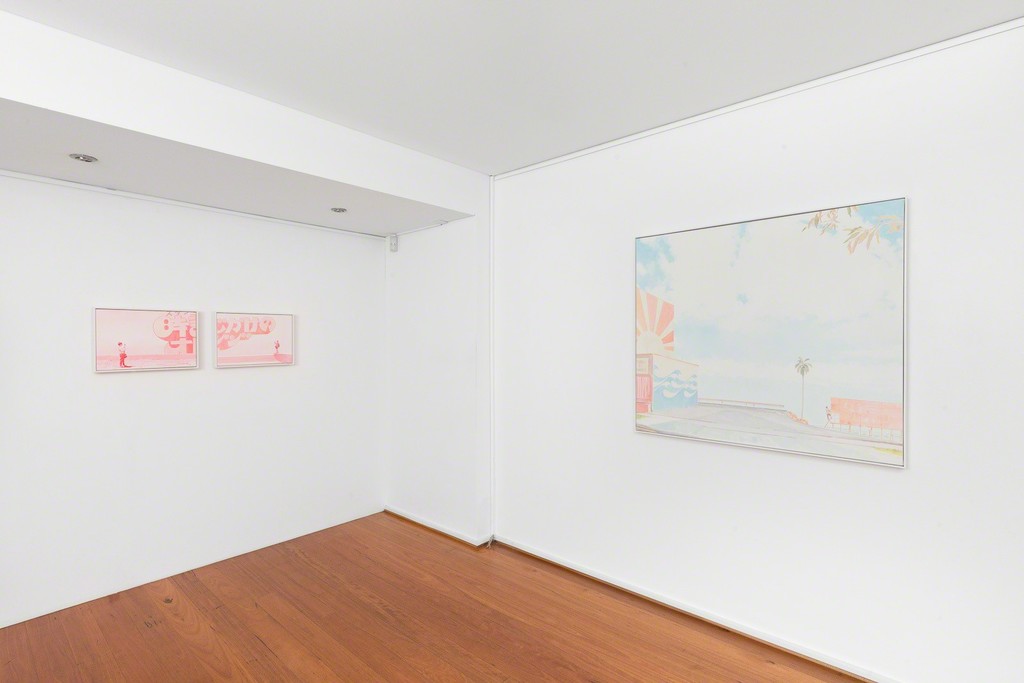 Piermarq is proud to present Exits, the latest body of work by Sydney-based artist Craig Handley.

It’s hard to mistake a painting by Craig Handley. In the past few years he has created a distinctive and unsettling body of work. At a first glance they seem simple enough, with what seems like iconography of the ordinary; suburban houses, common birds like magpies, seagulls and mynahs, beach houses, the prosaic act of mowing the lawn – even the plane is nothing spiffy but an ordinary Cessna. Sometimes there seems a touch of satire to some of his works. But all is not what it seems.

A closer look reveals a world that is odd, even disturbing. Consider the two paintings of a boy and, in the second, a man mowing a lawn. The boy’s lawn mower is like a miniature tank. It’s as if this turbo charged machine is going to direct him where it wants to go rather than the other way around. The man pushing his mower is moving towards a steep hillock that will be impossible to mow. Then there are the birds. They don’t come in flocks but are solitary as if lost. There is the blank sea, tantalizingly close, but no one is really interested in it. Everyone seems absorbed in their tasks, whether working or using their smart phones. No one is connecting with anyone else. The people photographing objects, are unaware of their silly postures, as if the phones have possessed them and have removed an awareness of the real world around them. The strange thing is that the only figure that seems animated by inner energy is the creepy inflatable stick figure of a man which features in his Wynne entry Funny hahas and bloody galahs.

This exhibition has moved on from his exhibition The Trappings (2017). The colours are now muted as if an eerie silence has fallen on the universe of Exits. At times it seems ghostly, as if these are memories in the process of slowly being forgotten. Then there are the ubiquitous figures of the teenage boy who has metamorphosed into a middle-aged man that has the sharp tang of a psychological autobiography. All of this is driven by a subterranean stream of melancholia.

To me the key painting in Exits is the one that most people would overlook – the ruined outdoor stone staircase. Where are the humans? Where is it leading? Beyond is a blank mist promising nothing. Time is erasing something that was built to last for eons.

It’s obvious it would be a mistake to take what seems the ordinary in Craig Handley’s work at face value. Underneath is a complex, even ominous view of a world we take for granted. It is a significant achievement of a strongly individual talent.