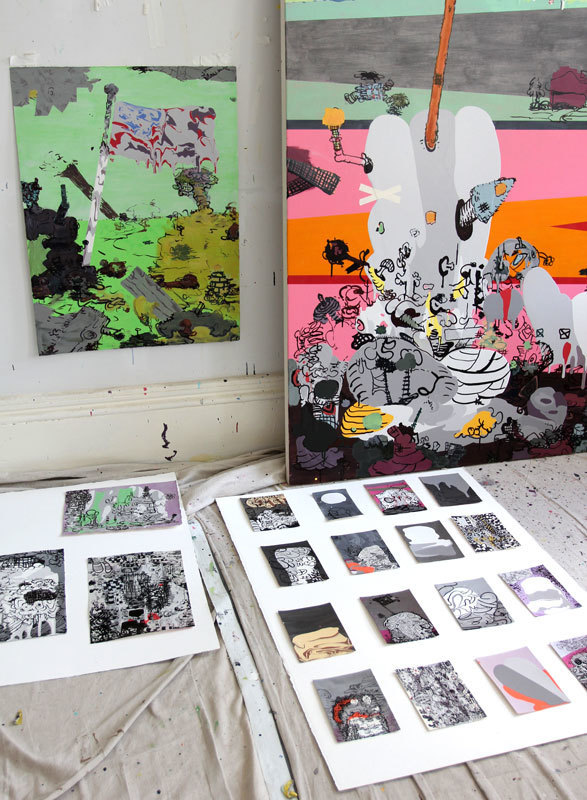 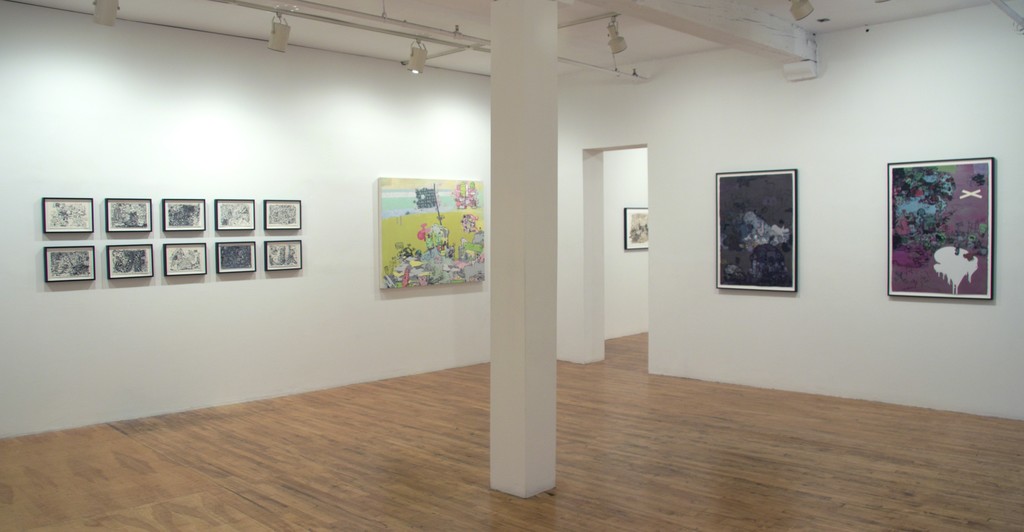 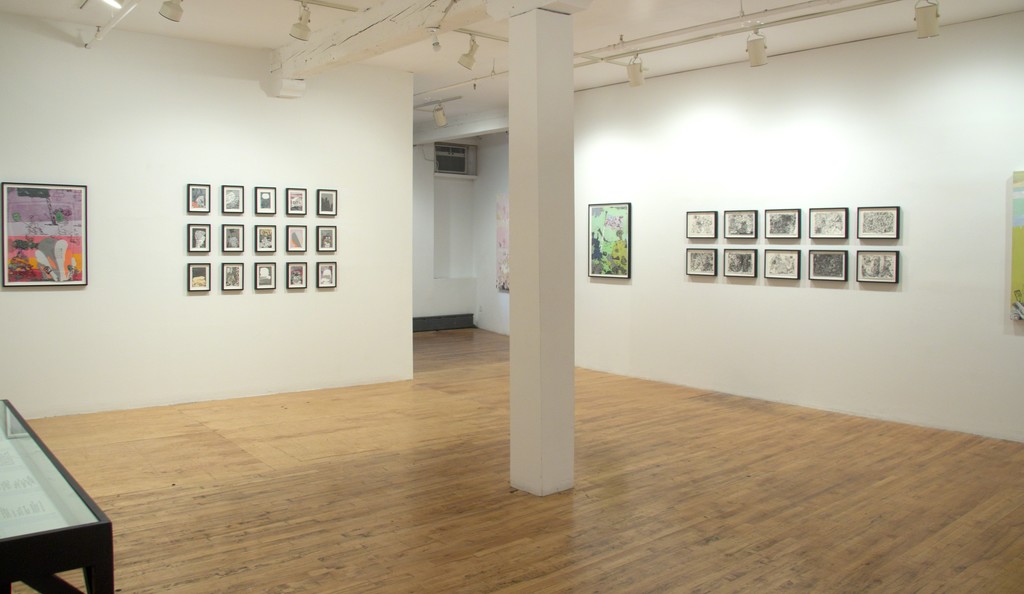 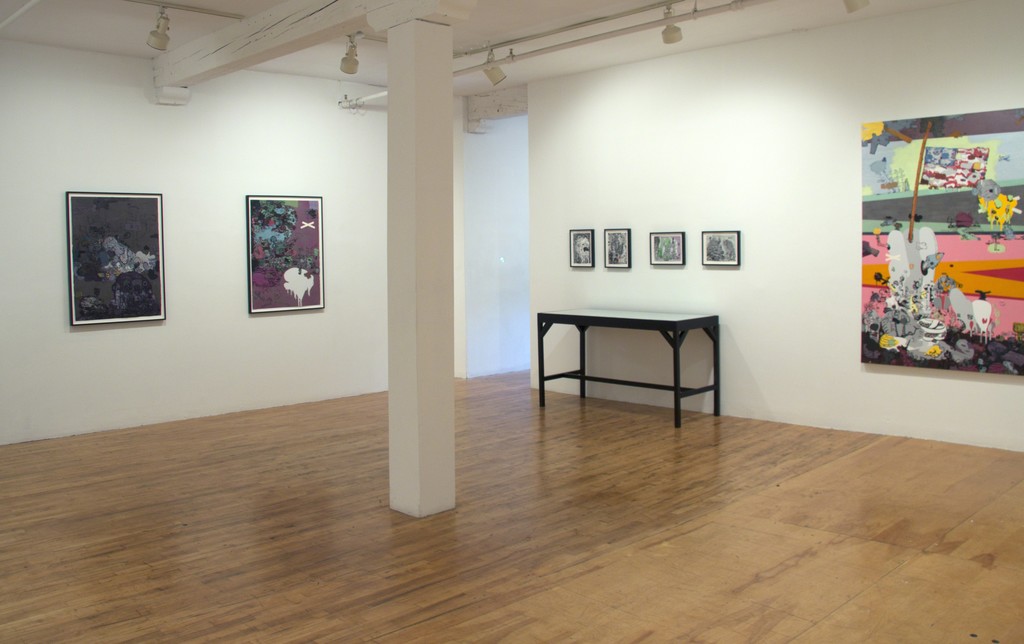 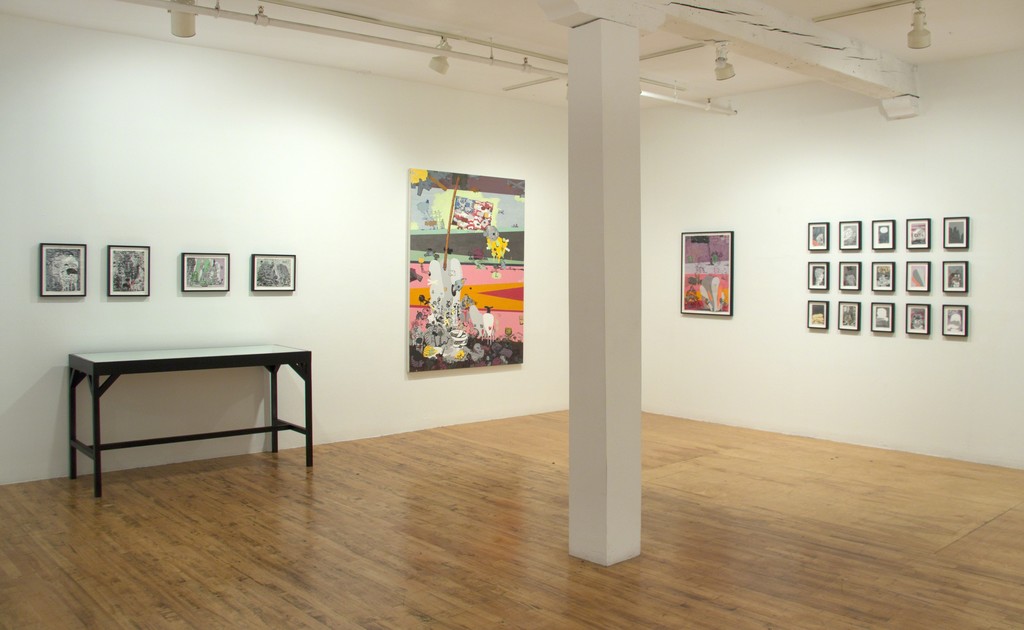 For her sixth exhibition at Pierogi, Jane Fine once again surprises and seduces the viewer with work ranging from tiny paintings on paper, to one explosive six-and-a-half foot emblazoned with the American flag. Fine is not one to follow a safe path; she insists on taking risks with every aspect of her work, combining vibrant color, improvisational brushwork, and poured paint in off-kilter compositions. Although she works on a traditional rectangular format, her work is anything but.

Composed in the vernacular of abstraction, her paintings slowly reveal recognizable images of flags, scars, planks, patches, bricks, and even bits of idyllic, flowery landscapes. Her work is deceptively celebratory while oozing tension about the condition of contemporary life. Fine is focused on the conflicts between privilege, pleasure, and anxiety – anxiety regarding consumption, climate change, and the end of the American Century. An acute awareness of the exhibition’s September 11th opening date motivated her work for many months. The show’s title, “Contents Under Pressure,” is thus intentionally ambiguous, referring to champagne as much as to chlorine gas.

According to Fine, her painting “…pushes abstraction just enough towards figuration to essentially create abstraction with social content. There is a legacy of Philip Guston, Peter Saul, Carroll Dunham here, also Jennifer Wynne Reeves and Amy Sillman. Recently, I heard Arturo Herrera use the phrase ‘contaminated abstraction’ to refer to his work. I told him I thought this was perfect and that I might borrow it.”

Fine’s painting technique was greatly affected by a residency in 2013 at the Golden Foundation, a project of the Golden Artist Colors factory in upstate New York. While there she had the opportunity to work with chemists at the factory and to experiment with a wide range of metallic and iridescent paints, as well as new gels, medium, and inks. Fine has always been interested in maximizing the possibilities of physicality on the painted surface and this residency was instrumental in advancing that process.

Jane Fine studied at Skowhegan School of Painting and Sculpture, the School of the Museum of Fine Arts Boston, and she earned a B.A. from Harvard University. She has received two Pollock-Krasner Foundation Grants, a National Endowment for the Arts Fellowship, and two NYFA Fellowships in Painting. In addition to the Golden Foundation, Fine has been invited to work at Yaddo, The Millay Colony, The Hermitage Artist Retreat in Sarasota, The Fine Arts Work Center in Provincetown, and The Cité des Artes in Paris. This year Fine will be a Visiting Assistant Professor at Hamilton College.