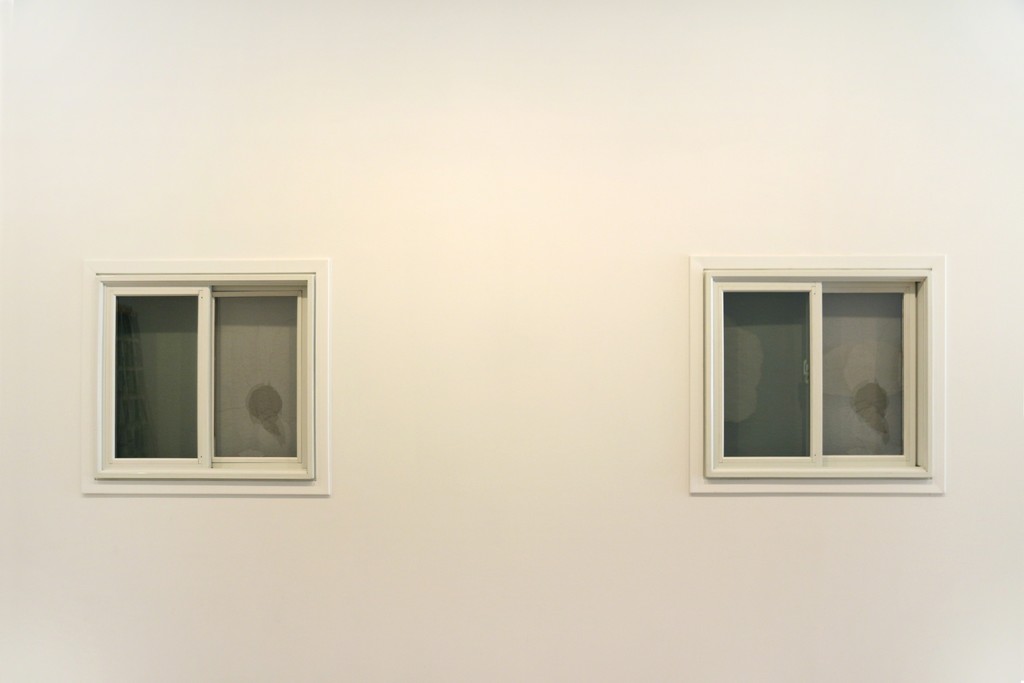 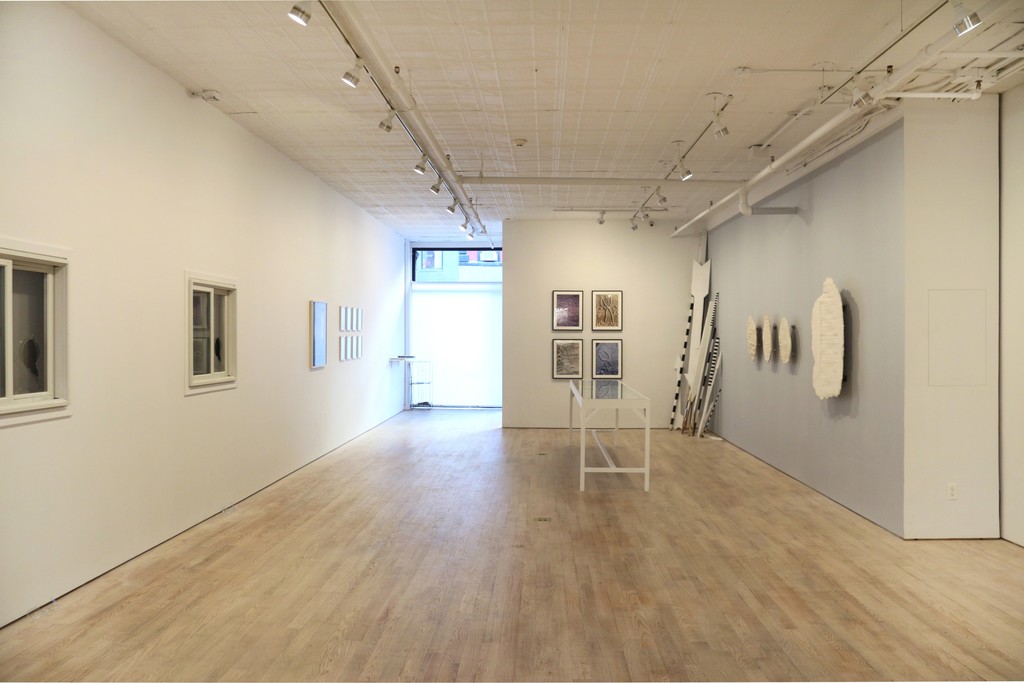 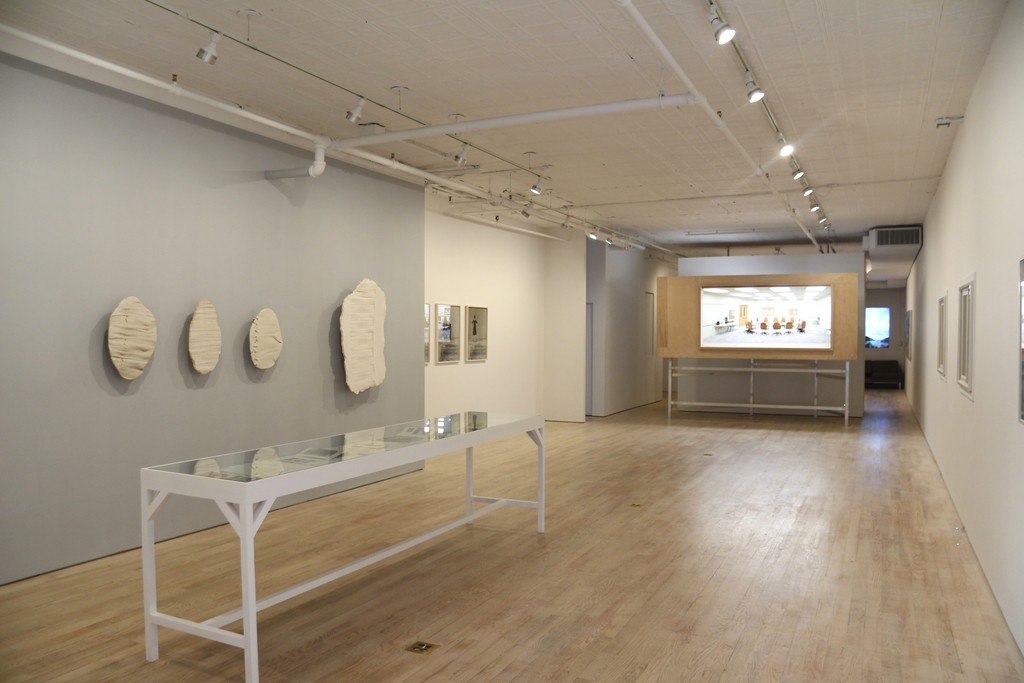 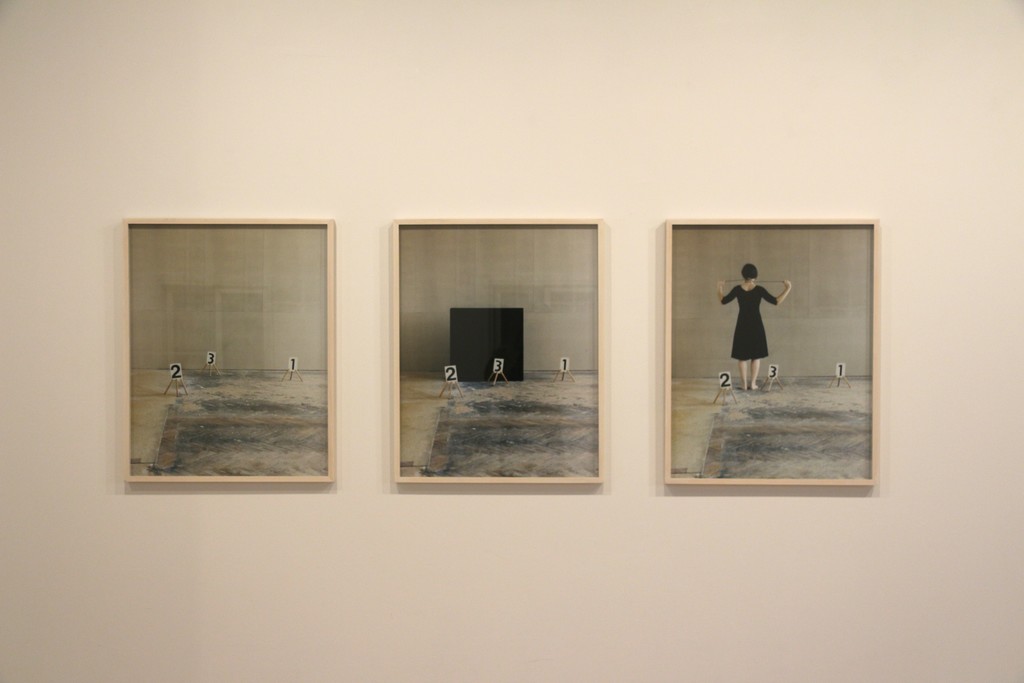 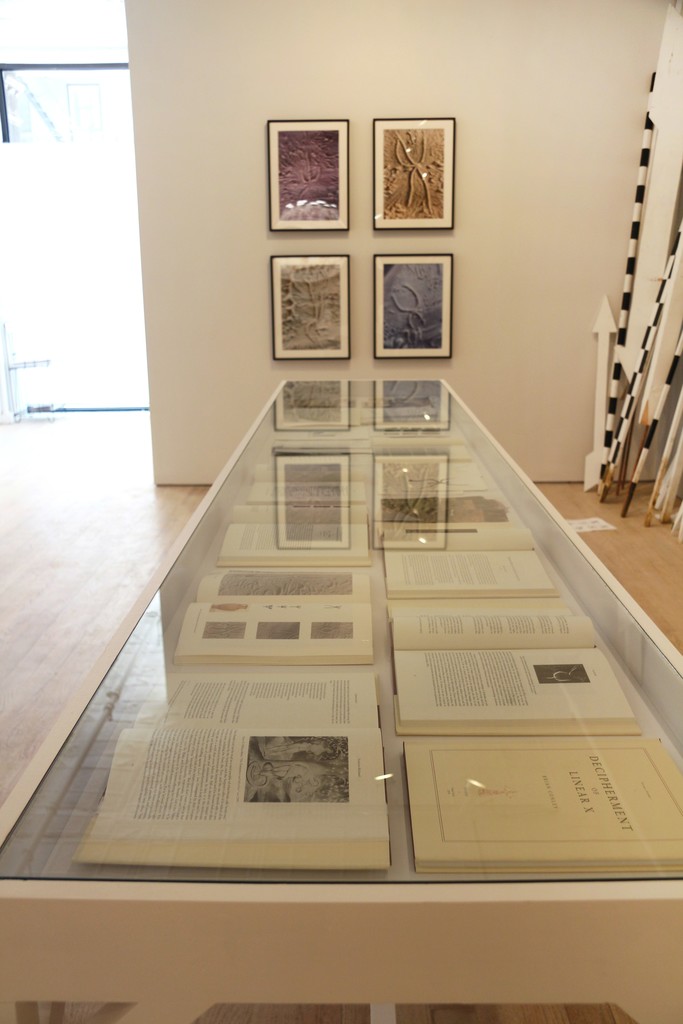 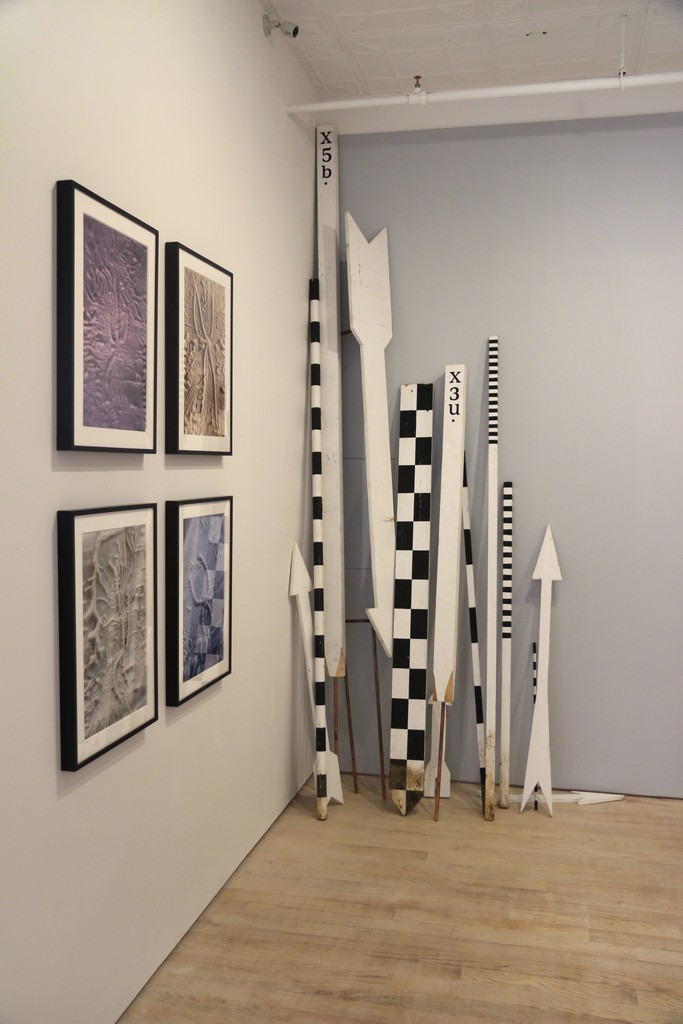 "False Narratives” proposes multiple notions of narrative and means of creating narrative: the fact that a narrative can be implied, suggested (by), or projected (onto); and the difficulty of pinning down a particular narrative as fact, as true or false, as reliable. Unreliable narratives come about through both intentional and unintentional means. The work by each of the artists included in this exhibition pushes the viewer to fill in information, to question their assumptions, question what they see, think, and feel.

Nadja Bournonville’s “A Conversion Act” photographic series developed from her exploration into the fascinating factory-like defining of, and perhaps invention of, the so-called disease of “Hysteria” that occurred at the Pitié-Salpêtrière Hospital in Paris at the end of the 19th century. In this body of work Bournonville’s focus has turned to the act of transformation, the spectacle, the making of a scene, the attempted photographic documentation and mapping of the body, the underlying erotic aspect, and the rickety construction on which Hysteria was defined at its height. Whatever actual symptoms and ailments the patients suffered from, a narrative of Hysteria was created through study and photography to define them.

“At the Pitié-Salpêtrière Hospital in Paris Dr. Jean-Martin Charcot was reigning like an emperor over more then 4,000 female patients. The hysterical attacks at the Salpêtrière were unique since they always seemed to follow a pattern of four phases presented and diagnosed by Charcot. This pattern was meticulously documented through photography. The captivating images of the often young and pretty girls in hysterical attacks found their way out of the hospital and into history. Hysteria is still intriguing to us today although no longer a medical diagnoses in its own right but rather hidden under other names if, that is, it exists at all. This elusive disease turned into a starting point for me and opened up the possibility for the creation of an image world of photographs and drawings. What fascinated me was not so much the medical discussion but rather how hysteria seemed to become what was needed from it at the time, a constantly changing surface for projection and a reflection of the society with all its taboos and rules.” (Bournonville). Brian Conley’s “Decipherment of Linear X” project came about when he found a stick on property upstate that was covered with what appeared to be incisions with a striking calligraphic quality, perhaps carved by Native Americans, he thought. He later discovered that the sticks had in fact been carved by a species of beetle. Conley found that the markings resembled those of a proto-language and the earliest written languages, such as Minoan Linear A and B in use in Crete between 1600 and 1100 BC, which he had previously studied. He was already familiar with “The Decipherment of Linear B,” the factual research into the meaning of this early language. Conley ultimately approached the markings on the sticks that he found as if they were an actual language. He made a series of tablets by rolling the sticks and logs onto clay so that the markings were flattened and rendered ‘readable’; he isolated repeating markings by photographing them individually to develop an alphabet or set of pictographs, and; he approached a number of scholars, writers, and scientists to study this language through the rigorous lens of their respective disciplines as a true language and consider what it might mean. “Decipherment of Linear X” presents these incisions as intentional marks which constitute an unknown proto-language.

Roxy Paine’s “Meeting” is one of a series of sculptural dioramas Paine has completed in recent years. In this sculpture both the subject and the technique work together to develop the suggestion of narrative: something has happened in this room, or is about to, but we don’t know quite what. The title of the work reveals the context and subject: a fluorescent-lit room with gray carpeting, water stained ceiling tiles, flyers pinned to cork message boards, and a circle of empty chairs at the ready. Because the room is empty we are left to wonder about the events that have occurred or are about to occur: potential difficult conversations, and individual and group struggles.

“Meeting” proposes a subjective participation with the work where time seems to stop: the viewer brings their own interpretation and projects their own narrative onto the psychological space of the diorama. The use of the diorama format and the technique of perspectival distortion serve to highlight the examination of such a scene and the nearly hallucinogenic visual distortions the viewer must account for, contributing to the psychological tension. There is a palpable sense of presence and absence, of timelessness. Tavares Strachan’s body of work, like Paine’s, is not easily categorized because it works on so many levels simultaneously, including: exploration and displacement; possibility vs. impossibility; absence and presence. Whereas Strachan’s recent encyclopedia series has highlighted and brought to light overlooked or distorted historical and cultural narratives, he also works to create and seed narratives of his own making, while overturning false narratives that we have become accustomed to and expands them outward to reveal a broader perspective.

Included in this exhibition is a diptych comprised of duplicate broken windowpanes. While attending RISD and living in Providence, RI, Strachan noticed a neglected industrial building with a broken window. He proceeded to create a series of identically broken panes of glass that he inserted into the existing building windows. It was an unidentified intervention into an existing environment that passersby, who happened to notice this impossible event perhaps after a double take, were left to wonder how this had come about and fill in their own narrative about what led up to this event. After this intervention, Strachan created a series of discreet found windowpanes with identical breaks. Here they are divorced from the original environment and fitted seamlessly into the gallery walls, furthering the ambiguity of implied narrative.