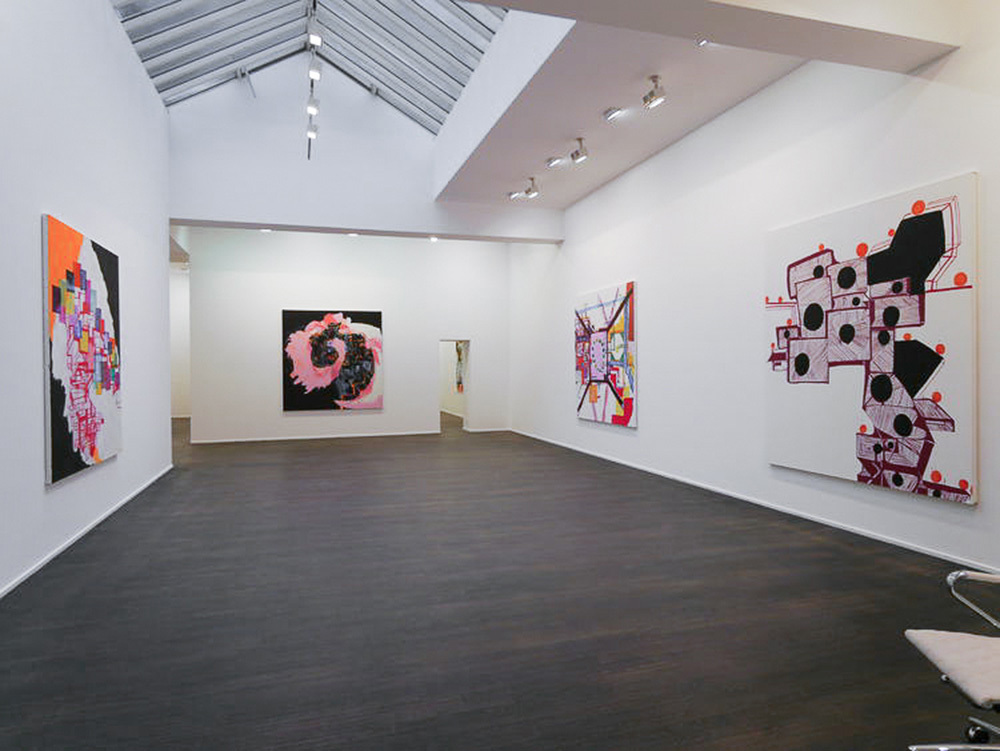 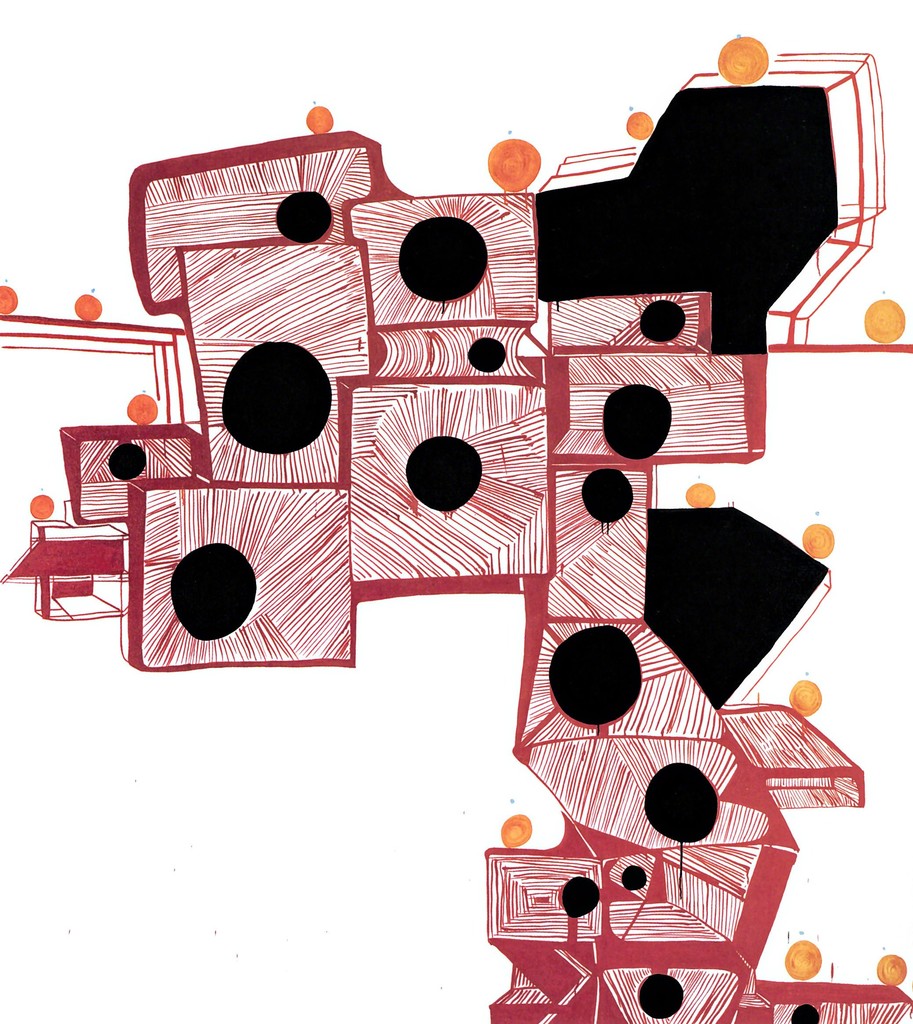 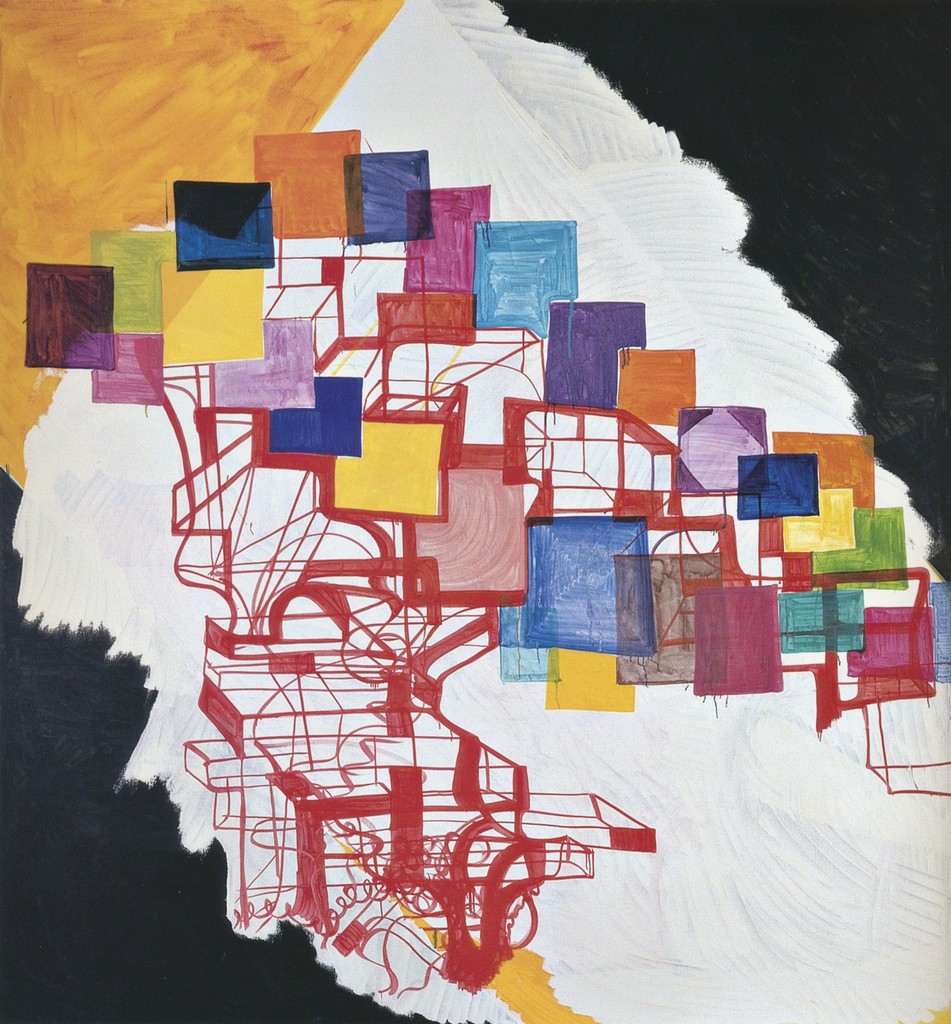 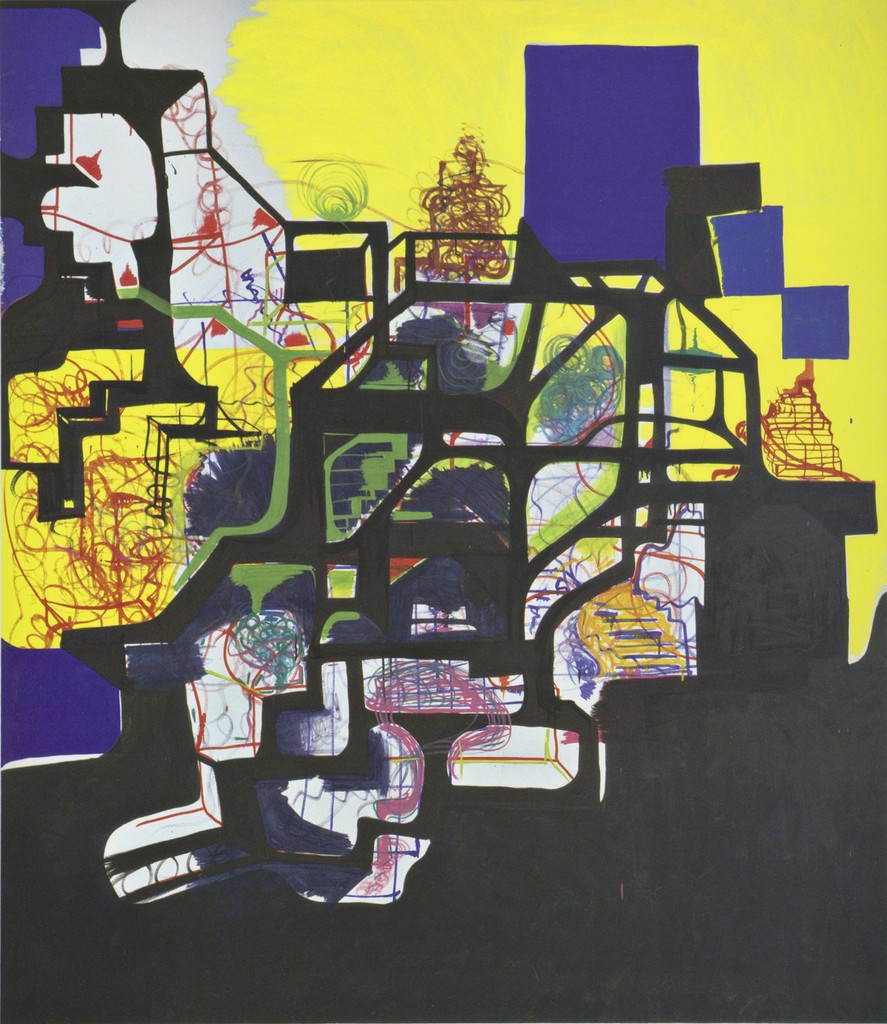 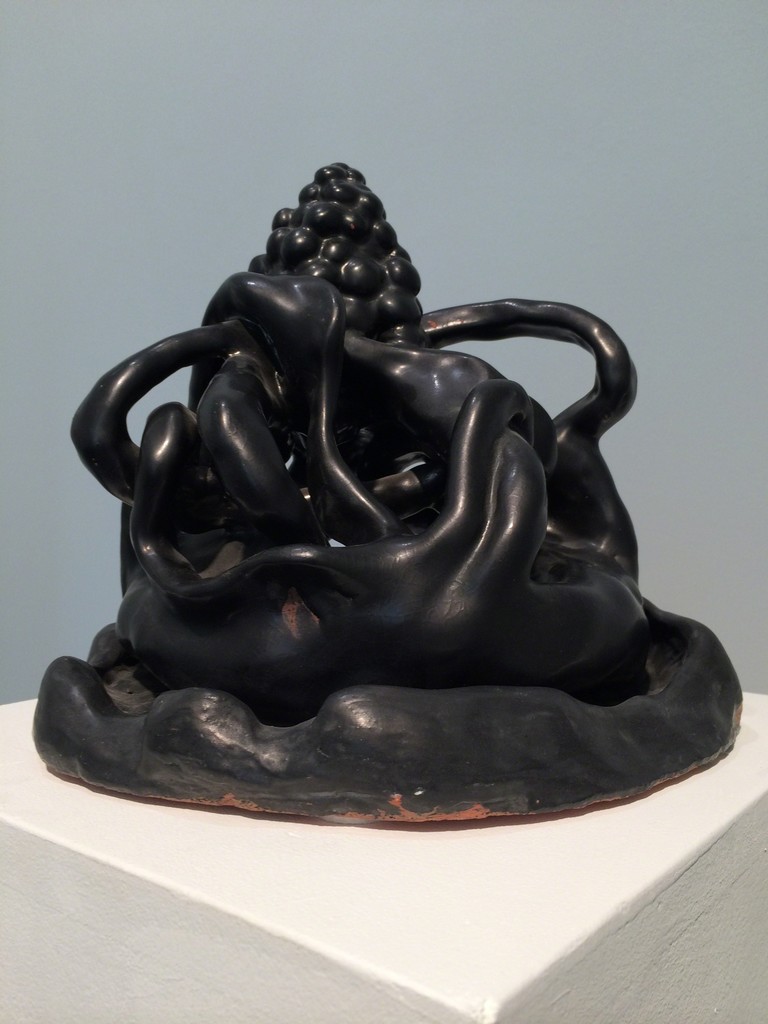 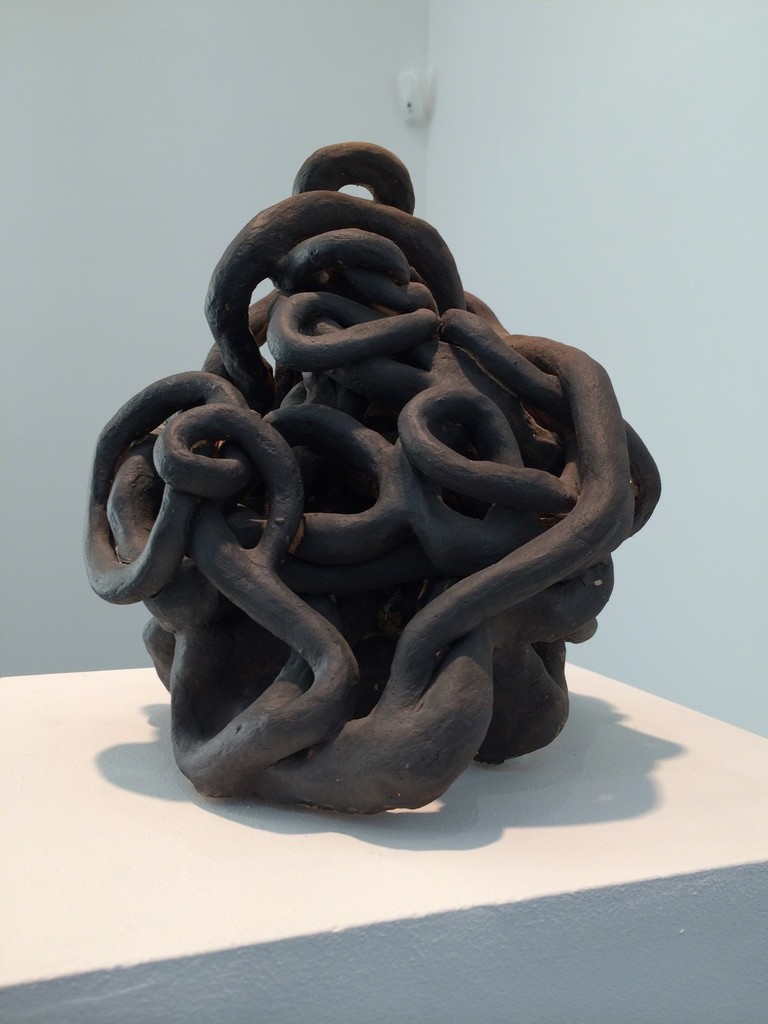 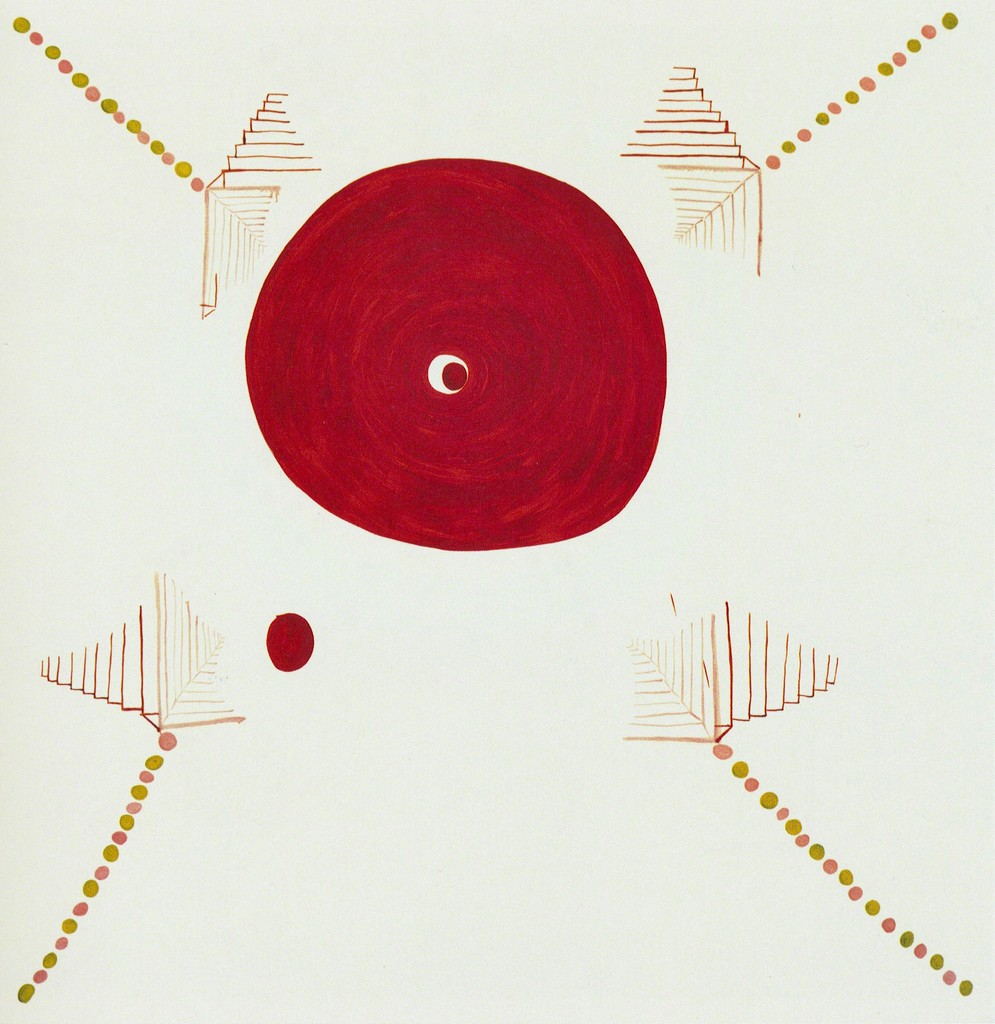 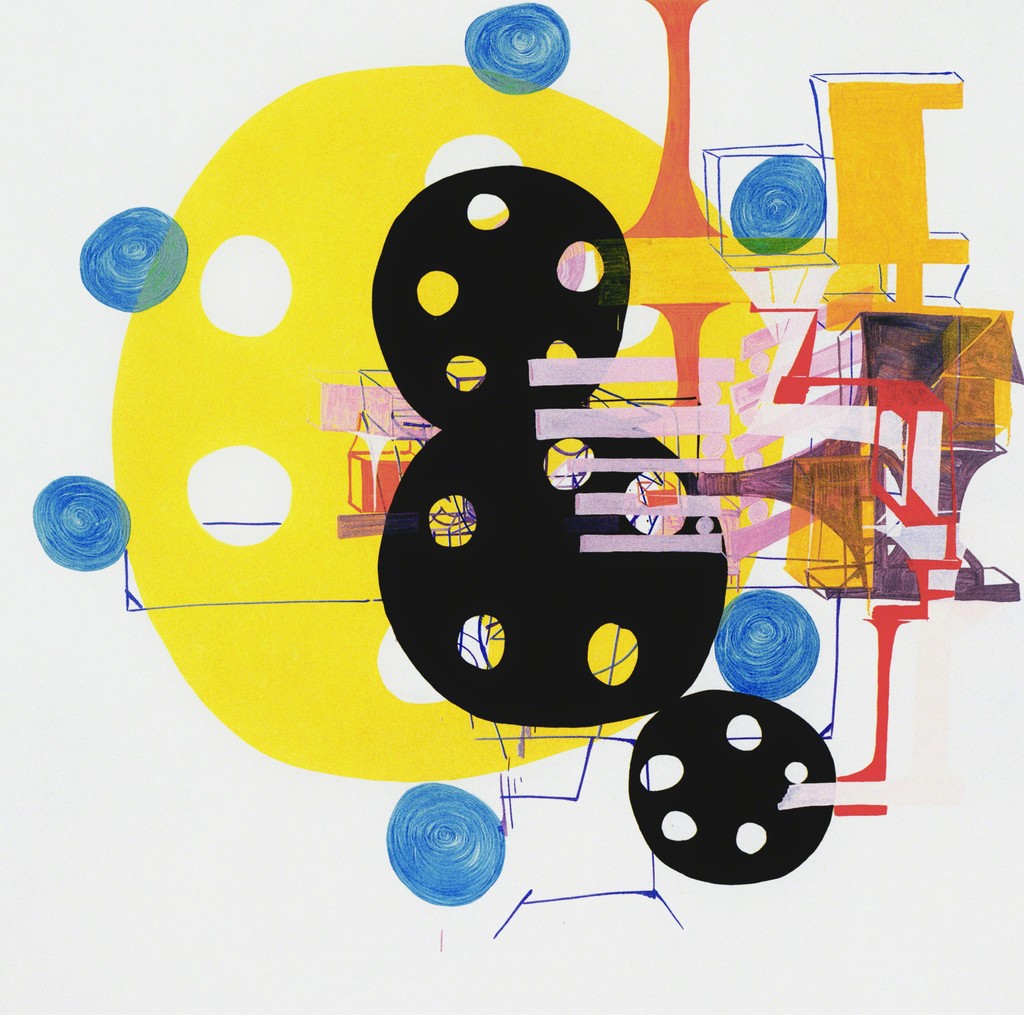 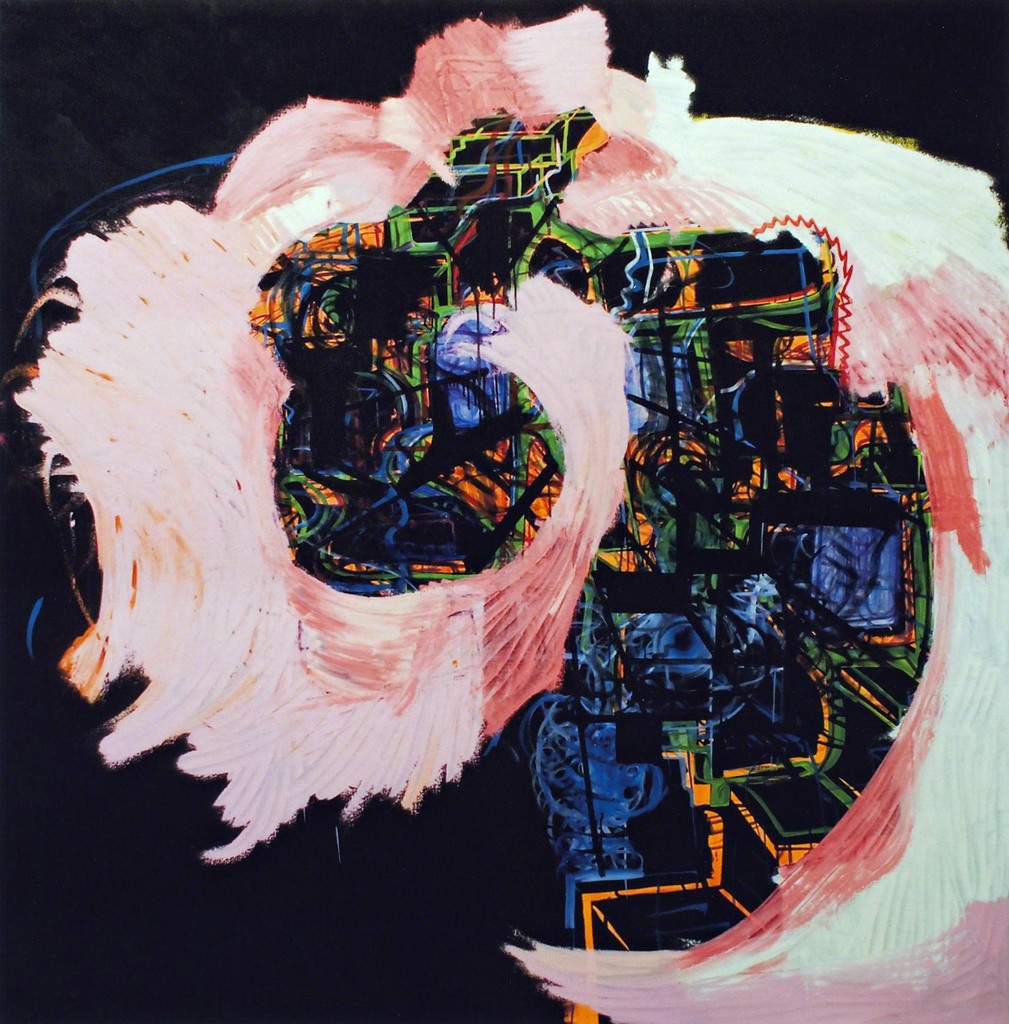 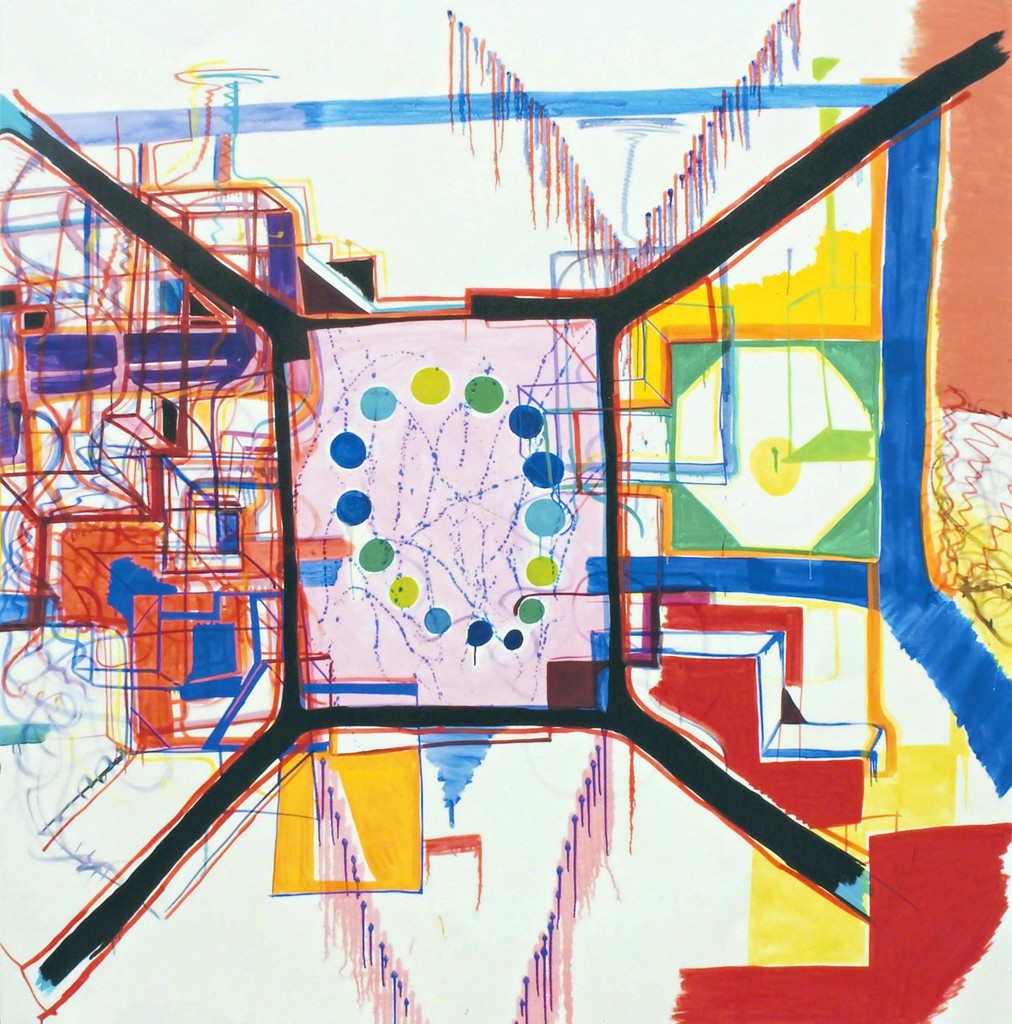 The first exhibition is devoted to the american painter Joanne Greenbaum and shows a group of nine major works made between 1997 and 2010 from a reknown Swiss private collection. The exhibition furthermore shows a group of watercolours as well as two small sculptures by Joanne Greenbaum.
Joanne Greenbaum, painter from New York, born1953, combines in her painting cool systematic with expressivity and strong construction with easy but expressive power of colour. She manages to gain a new potential in painting with her large format paintings: she crosses geometric and organic forms in a complex arrangement of the space of the painting, where appeals to constructivism as well as the aesthetic of comics appear. Joanne Greenbaum’s oeuvre distinguishes from the work of other abstract artists of her generation mainly through the richness of associanation and the playful compositions, which only demonstrate its systematic in a second view. Greenbaum’s paintings totally lack the appearance of the grave astringence which otherwise often define geometric constructive works. Her dense structures full of intense colours and magnitude of forms seem to reference diagrams, draft plans or architectural figures on the one hand and on the other hand they resemble in its vital liberty children’s drawings. Thus, Greenbaum’s paintings despite basing mainly upon geometric forms reference to a certain extent the aesthetic of Pop Art. Greenbaum stretches, drags and swaps the vocabulary of forms constructed with lines, points and squares, as developed by the protagonists of concrete painting at the beginning of the 20th Century, in such a way, that she develops the impression of a bizare concreteness. The elements of her painting sprawl into a unity and often seem to grow over the edge of the painting. They are images full of dynamic and dissimmetry, which most likely because of this, fix the viewers eye and soul so strongly.
Pursuant to Bob Nicklas („Painting Abstraction: New Elements in Abstract Painting“) Joanne Greenbaum belongs to the 80 most important abstract painters today. Roberta Smith, a reknowned art critic of the New York Times, described Joanne Greenbaum’s painting already in 1997 as incredibly cryptic, bold and crazy yet at the same time light and extremely attracting. Despite Greenbaum’s developments ever since all of these fully applies to her younger works.
Greenbaum’s works win over their expressive power of colour and their verve with which the artist fills her canvases. The system behind these multitude forms may in many paintings only be seen in a second view. Pursuant to Barbara Basting of the Zurich newspaper Tagesanzeiger from April 12, 2008, Joanne Greenbaum’s oeuvre is unique, consequently developed and immediately attracting. The paintings in general develop a distrinctive expression, in which the physical aspect of the act of painting seems to linger, as described in the exhibition catalogue of Haus Konstruktiv in Zurich.
Joanne Greenbaum personally sais: „I am not afraid of colours. I paint instinctively. I do not intellectualize the colour.“
After Joanne Greenbaum had been enjoying the appreciation of famous connaisseurs of the art scene and institutions in the USA for a longer time already, she was offered a major one woman exhibition at Haus Konstruktiv in Zurich as well as at the Städtische Museum Abteiberg in Mönchengladbach, Germany in 2008. After the latter exhibition the important collection Rheingold in Germany acquired a group of works by Joanne Greenbaum.