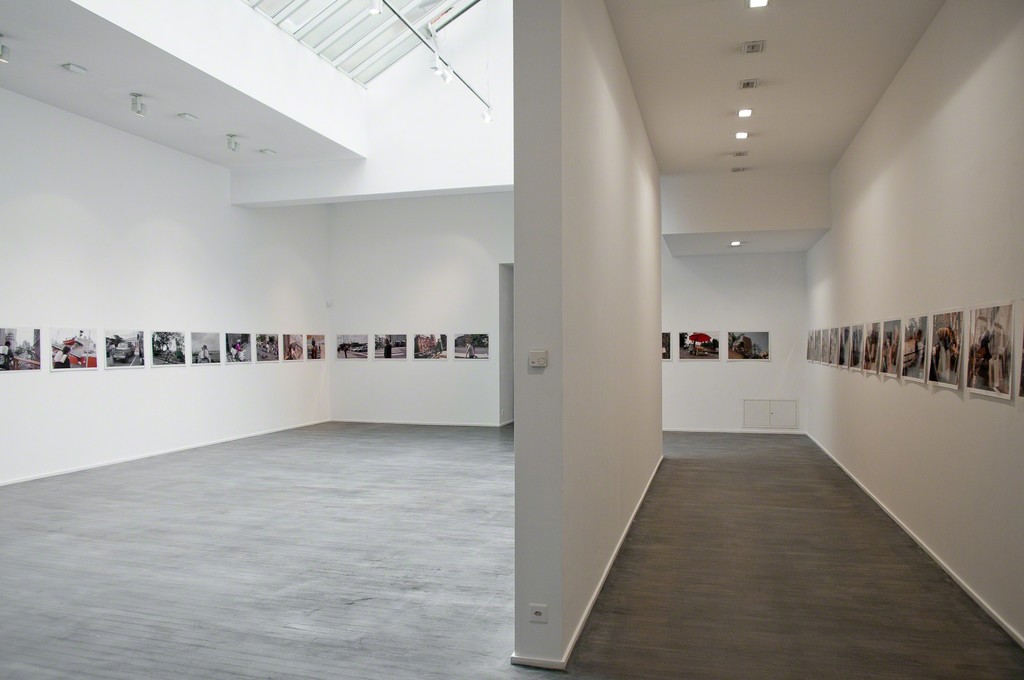 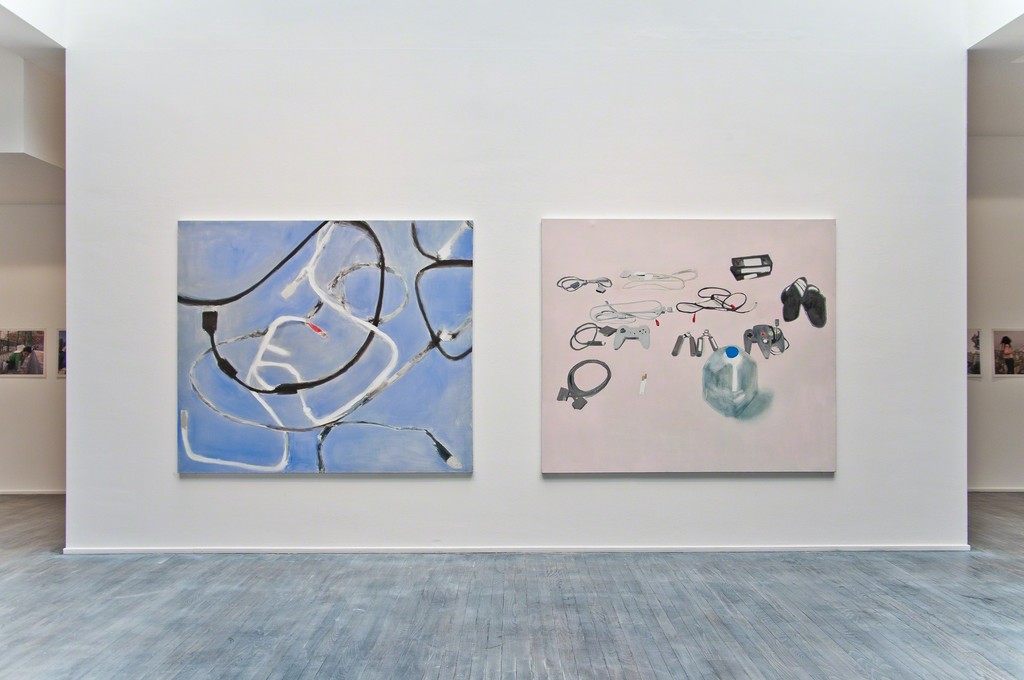 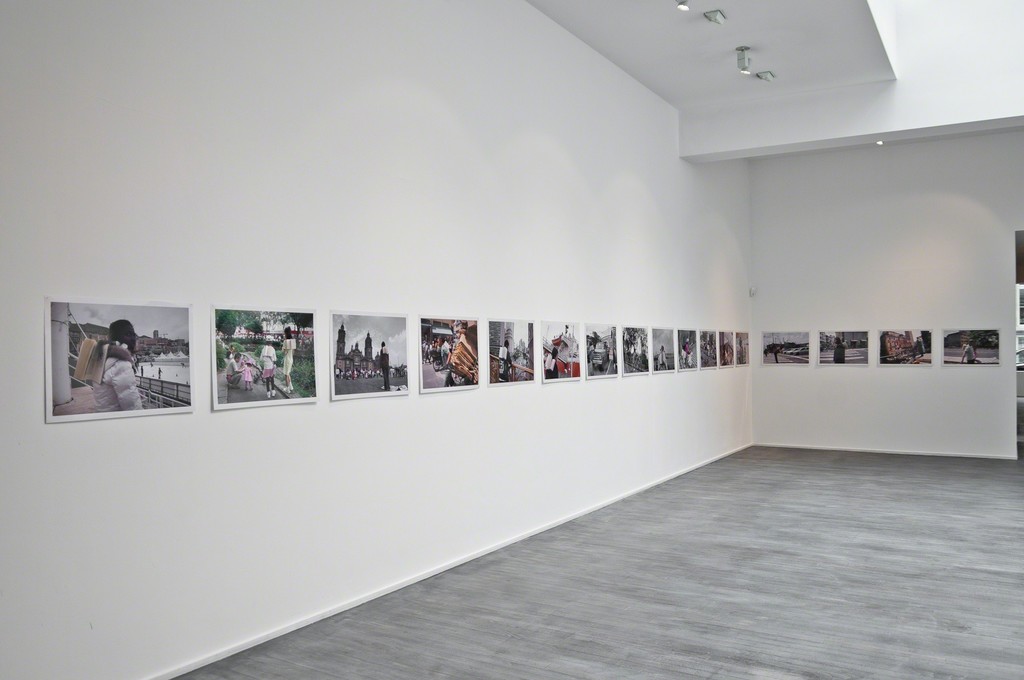 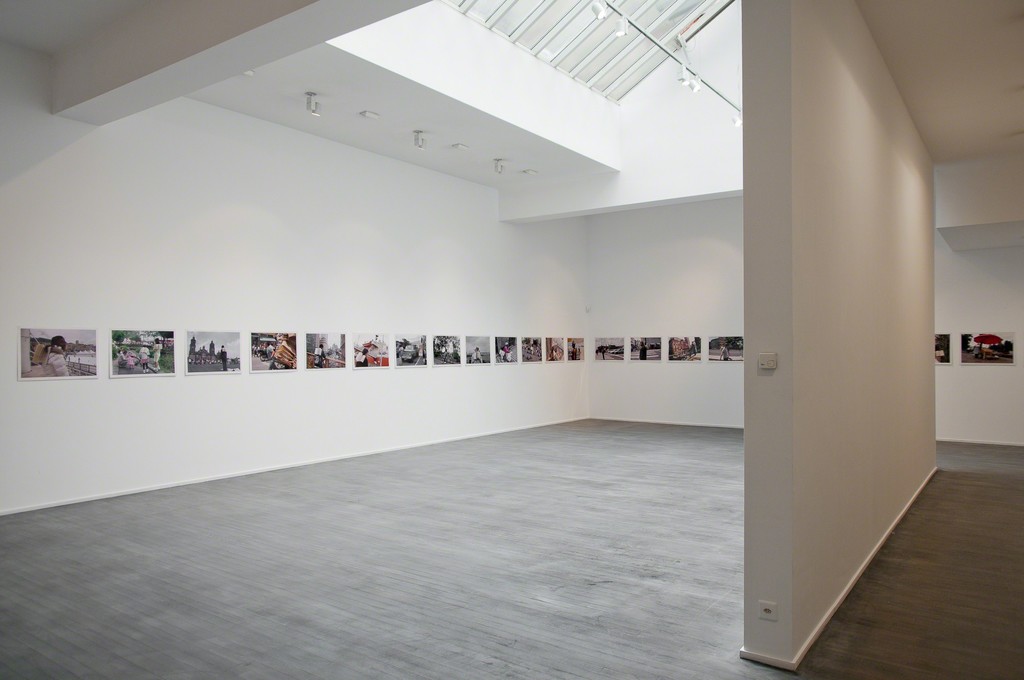 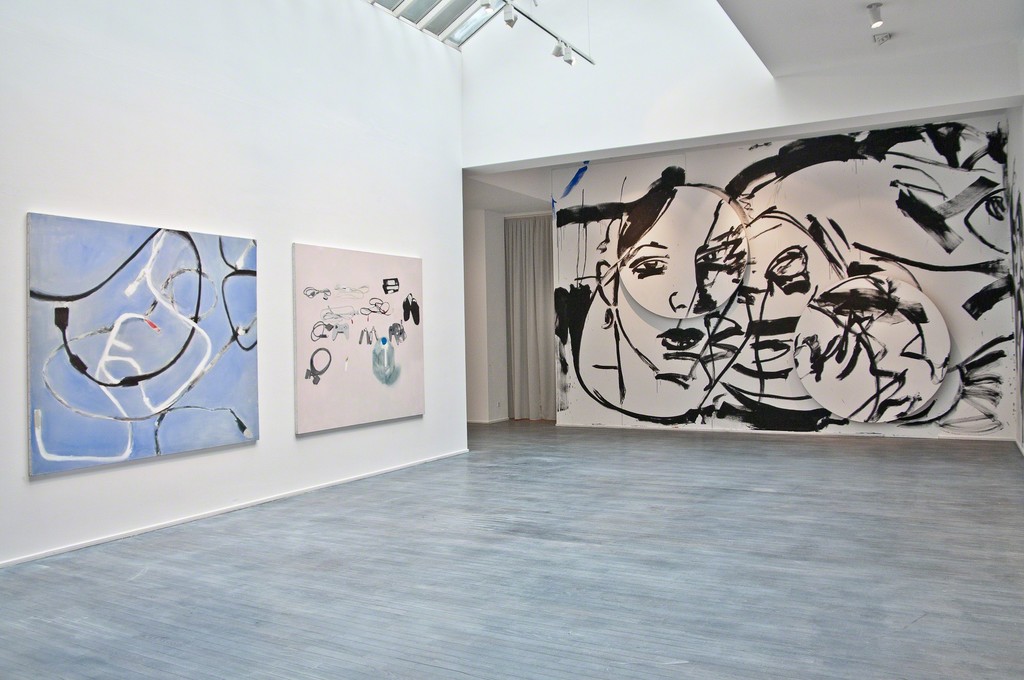 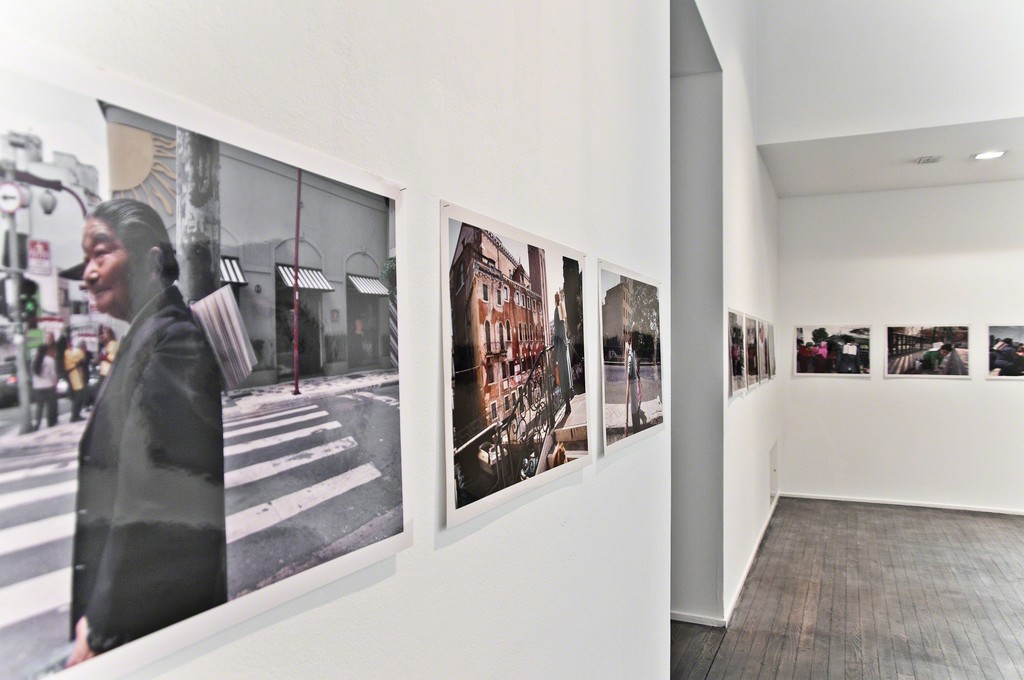 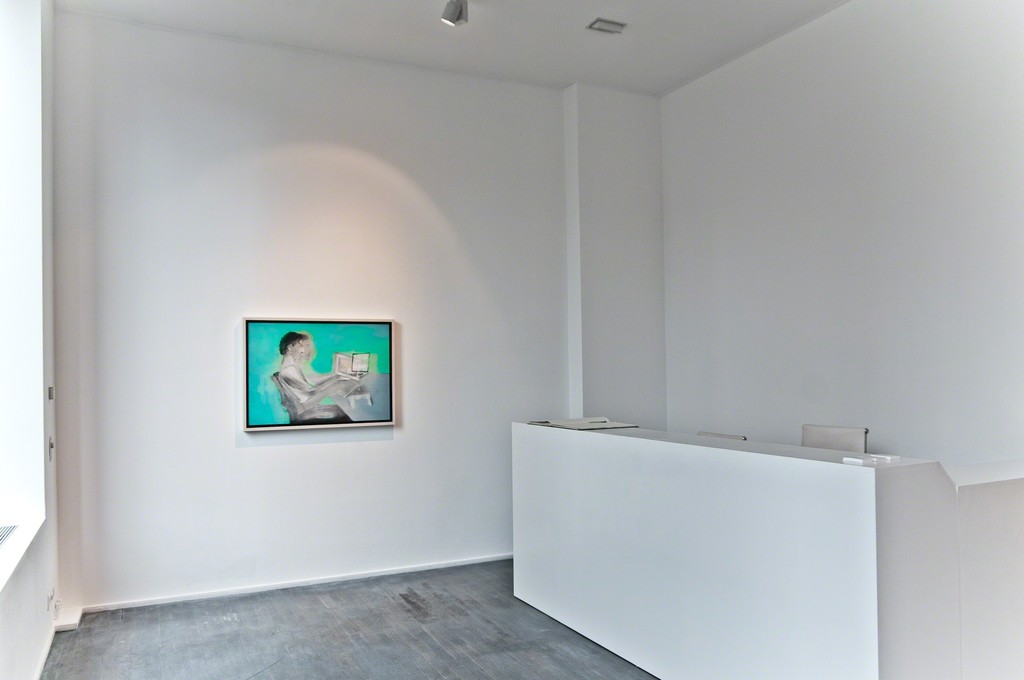 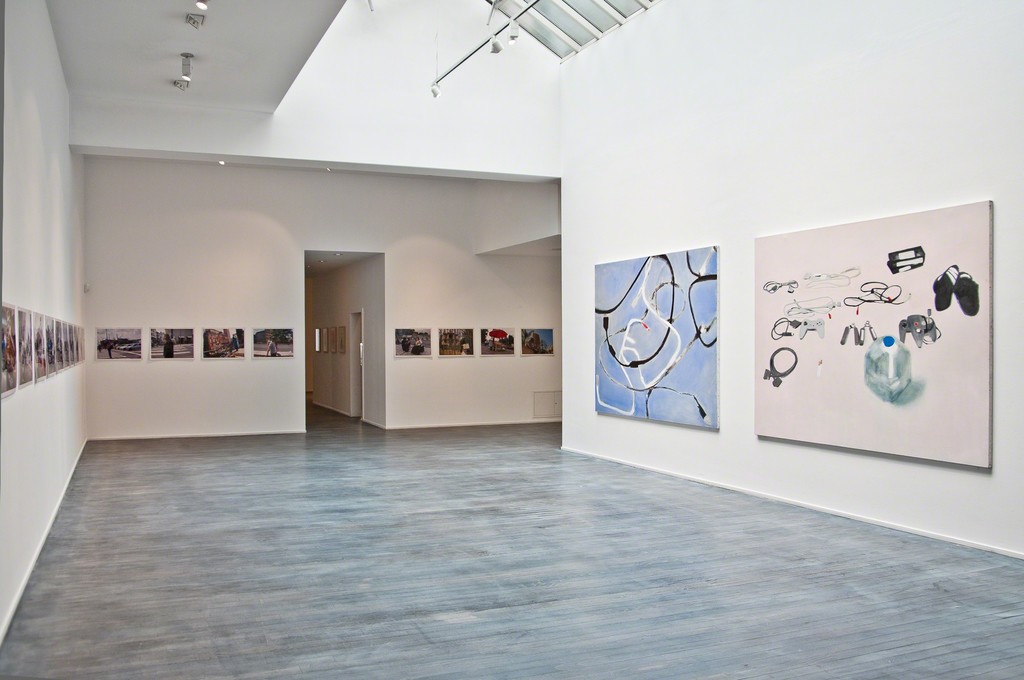 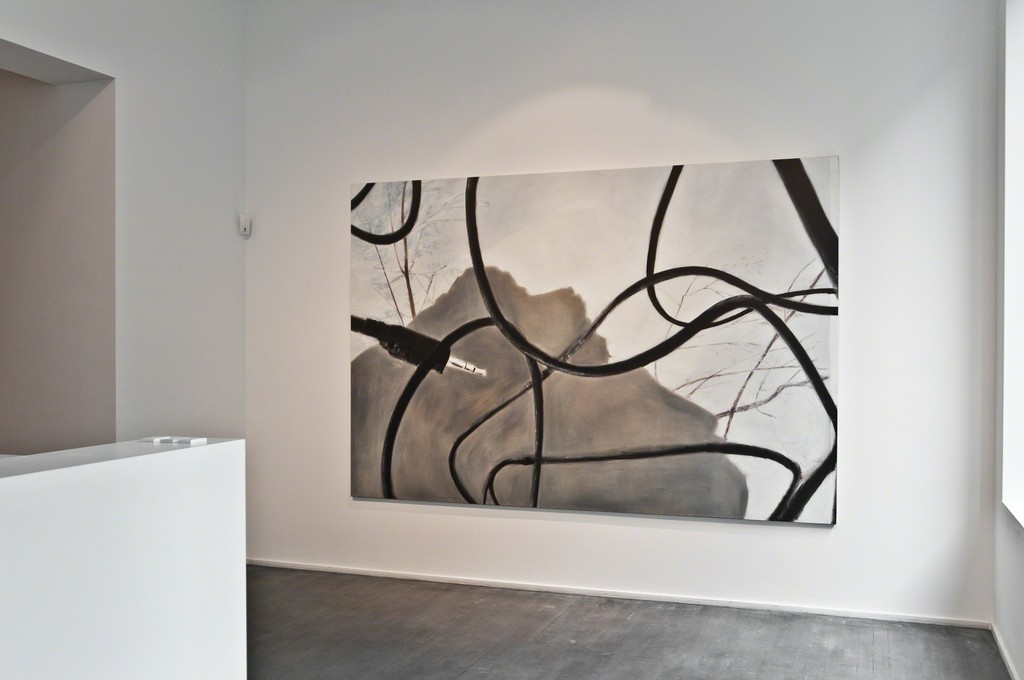 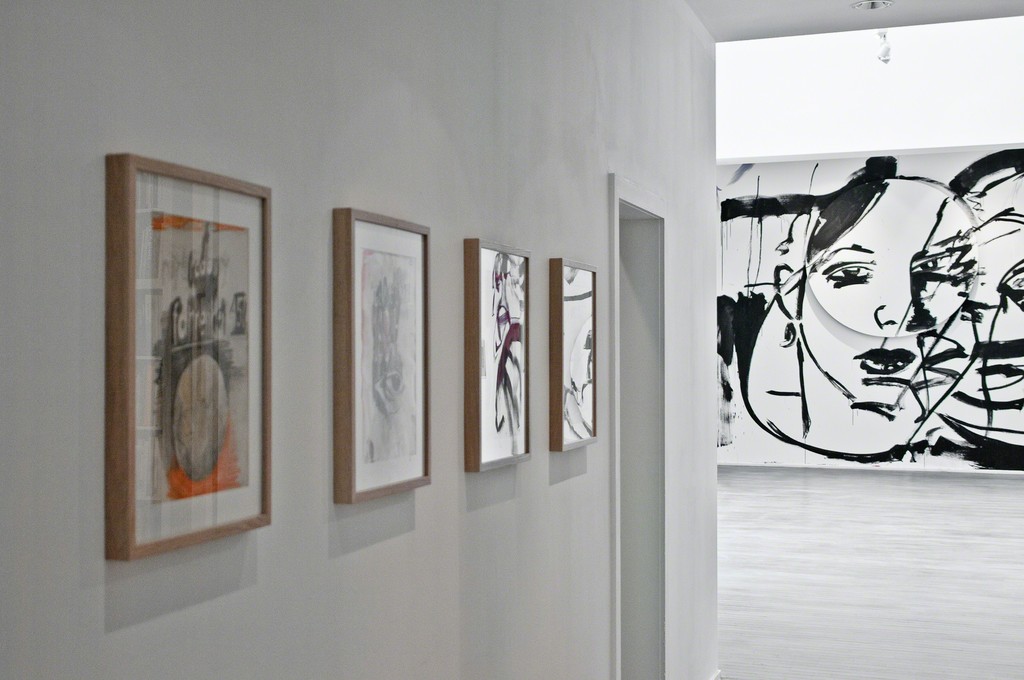 PLUTSCHOW GALLERY is pleased to present the exhibition RENDEZVOUS with works by Luciano Castelli, Miltos Manetas, Marta Pierobon and Peter Wüthrich. The show is outlined around the constant motion of Castelli’s „Revolving Painting”, creating an electric atmosphere where every single work of art coexist within its surrounding and, at the same time, gains a brand new interpretation.

ANGELS OF THE WORLD, Peter Wüthrich
Peter Wüthrich (born 1962, Bern) is a Swiss contemporary artist working with actual books as medium for over twenty years. The series „Angels of The World” is entirely dedicated to the „protagonists“ of these books: the human being itself. Books are written by and for people who read them and retold, which in turn encouraged or influenced other people, even to write books. In other words, a book is a medium to transport the exchange of human experience. „The Angels of the World“ is an internationally praised onoing photograpy project, which started in Los Angeles in 2001, and took place until today in the cities of Santiago de Compostela, Milano, Mexico City, Madrid, London, Tokyo, Nagoya, Kyoto, Paris, Venice, São Paulo, Santos, Thessaloniki, Biel/Bienne, Monaco and Mumbai.
Peter Wüthrich juxtaposes the primary function of books as carriers and transmitters of knowledge and meaning with highly poetic images based on a humanistic view of the world. [...] By transforming accidental passersby – ordinary people the artist happens to meet on the streets of the respective city – into angels with the help of books as wings, the artist takes on the role of God and also answers some fundamental questions about the essence of angels: Are angels of this world? And if so, can they be cosmopolitan? Can angels be considered French or American or German or Asian, or aren’t all angels „Angels of the World“? [...] For Wüthrich, it is the book that transforms mere humans into angels: The book with its connotations to knowledge, imagination and creativity, metamorphoses itself into „angel wings“. I believe that the „angel wings“ will bring a special kind of spirit into the mind of the participating people...
Excerpt from Gérard A.Goodrow „Here, There and Everywhere. Angels as Mediums in the Work of Peter Wüthrich“

SELF PORTRAIT & CONTEMPORARY LIFE, Miltos Manetas
Miltos Manetas (born 1964 Athens) is a conceptual artist and theorist. He lives and works between London, New York, Rome and Bogotá. Manetas playfully explores new fields of expression, locating his practice in the realm of contemporary digital reality. He paints contemporary still lives: heteroclite collections of wires, cables, screens and computer hardware, while also producing video works, computer-generated prints, websites and performances involving video games. Manetas claims that websites are today's most radical form of art. As a means of countering the lack of theoretical definitions for this specific form of creativity, Manetas hired Lexicon Branding, a company devoted to the branding of new products, to create a name for this new 'art' practice. The chosen term “Neen” was announced in 2000 accompanied by the “Neen manifesto”, which states that “computing is to Neen what fantasy was to surrealism and freedom to communism."
In 2009 he started the Internet Pavilion of the Venice Biennial and from 2011 he directs the MACROeo (electronicOrphanage at the MACRO Musem in Rome). Manetas's work- according to Lev Manovich- can be placed within a well-established tradition in modern painting (representing modern people in their particular modern settings).

THIRSTY BIRD, Marta Pierobon
Marta Pierobon (born 1979 in Brescia, Italy) is a contemporary artist living between Brescia and Milano.
In searching of the origins of human existence, Pierobon grasps for every proof that might mean something in this process. Her works are treated with light and minimal gestures, endowed with intuition; concerned with memory, death, spirituality and identity. The anti-monumental volumes are stressed with the use of primal materials such as plaster and clay, indicating thresholds from classical sculptural tradition to Medardo Rosso.
“Birdwatching (2015 to present), or birding, is a form of wildlife observation in which the overlook of birds is a recreational activity. It can be done with the naked eye, through a visual enhancement device like binoculars and telescopes, or by listening for bird sounds”. The work is an ongoing project in which the idea of power is overturned. We –as spectators- become the object that is watched and not the other way around. It is a reflection on questioning yourself by becoming the object of analysis of the birds, that are studying us and placing us in the mental state of being judged. The project develops through different media, sculptures, drawings and installations.
I am interested in the primordial aspects of human existence: death, spirituality and identity. By using the social and visual power of the images belonging to the past and by stratifying disparate and opposing elements I built occulte and not declared narratives to investigate the culture and anthropological consciousness of the community [...] My works confront themselves with the time and space dimension, which is not only objective but that changes according to the capacity of comprehension of the viewer and according to the time that passes by from the emission of the information to its reception.