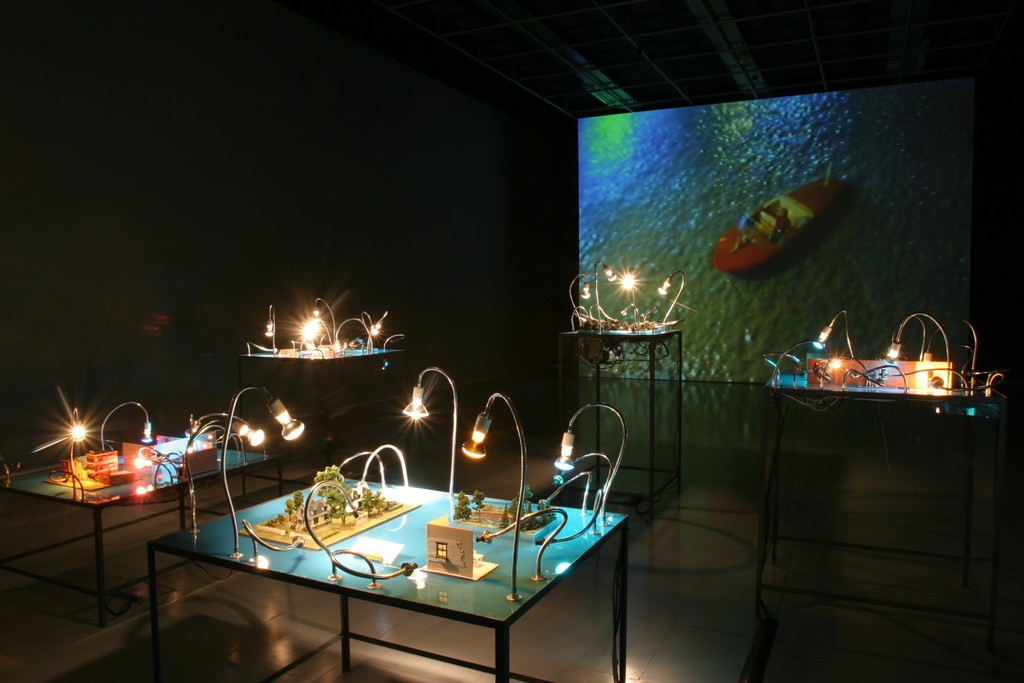 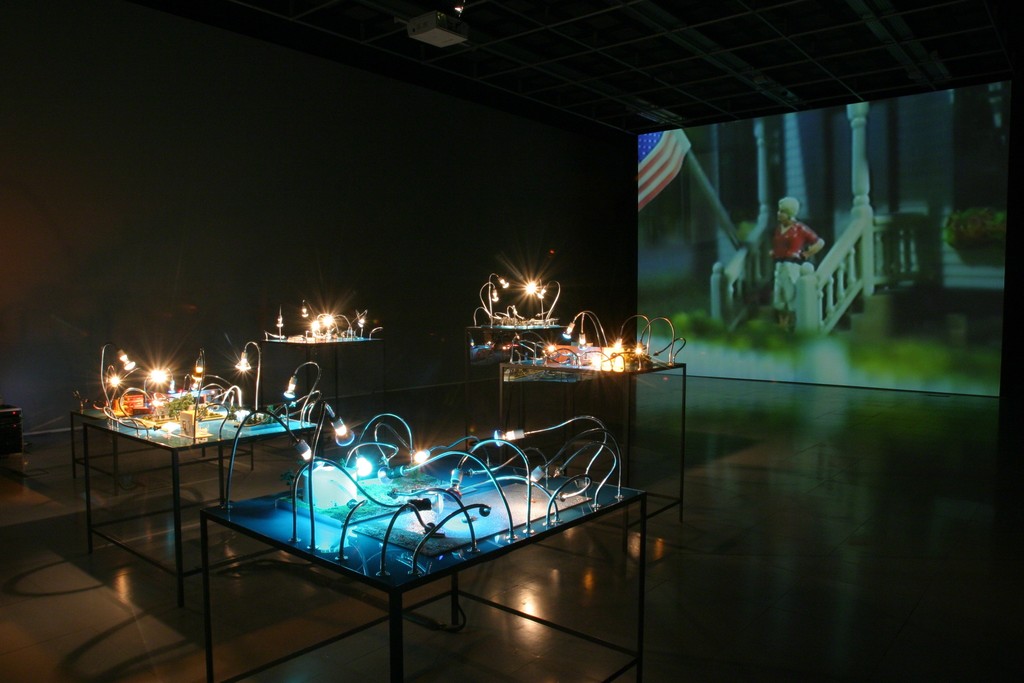 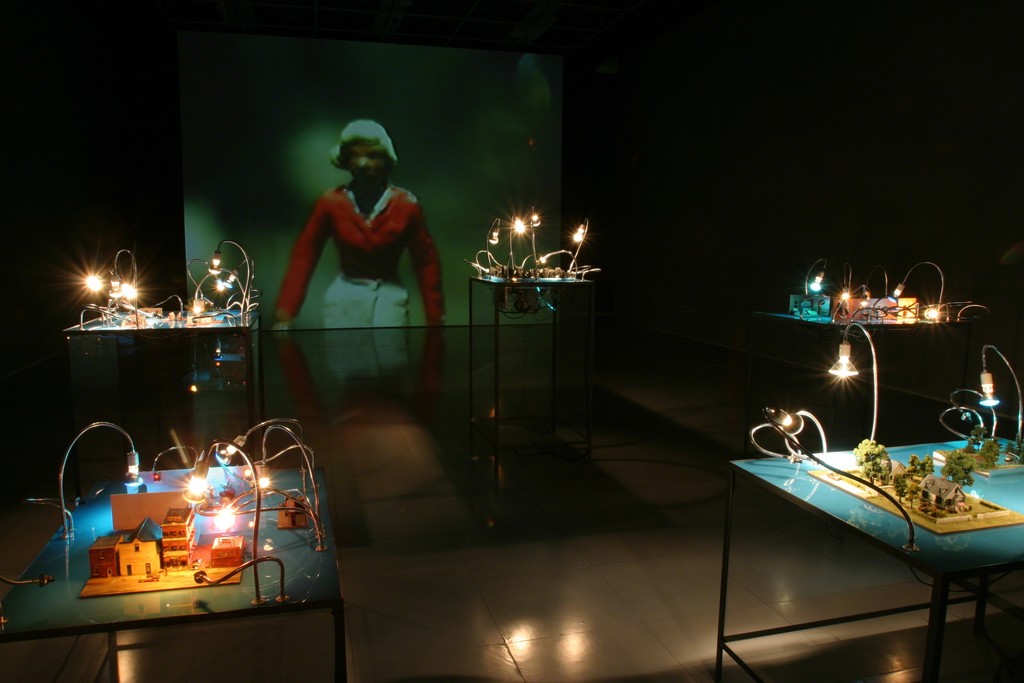 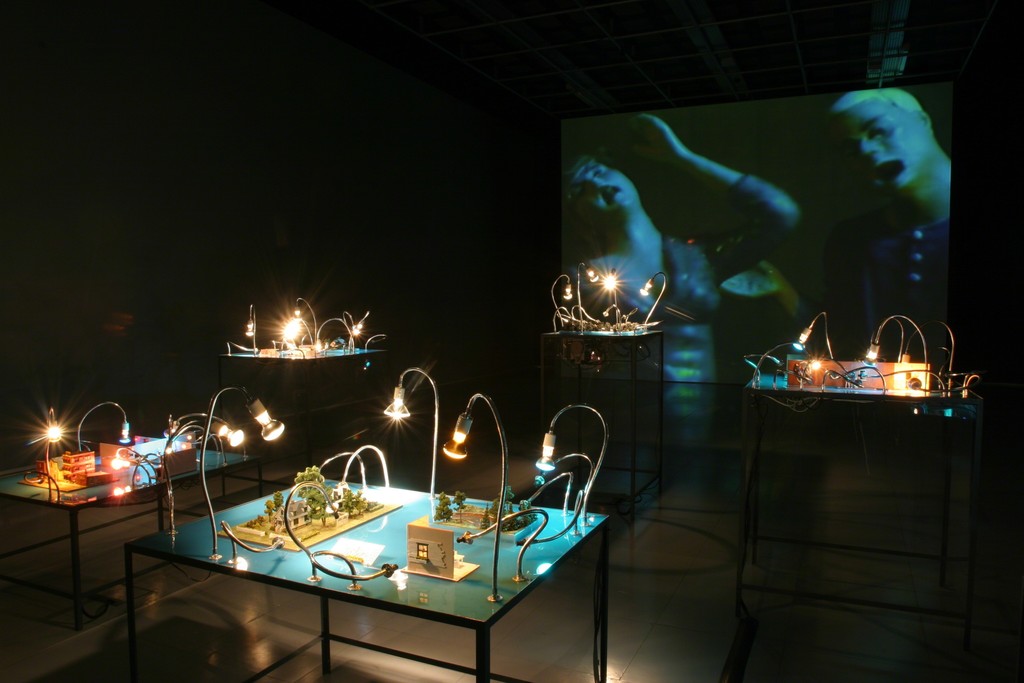 In this new series of works, the McCoys present electronic installations that examine narrative spaces. Extending from previous work of databased television and film material, the artists new work further explores the idea that thought, experience and memory are structured through genre and repetition.

Entering the gallery, the viewer sees seven platforms each containing a tiny fragmentary film set. The platforms each embody images and sounds from a particular cinematic genre (the eighties slasher, the fifties melodrama, the sixties art film, etc). The platform/genres can each stand autonomously or together they produce a cinema-hopping amalgamation of themes and eras. Over 50 miniature video cameras and lights are suspended over the sets, creating a new filmic entity generated live. By exposing the film sets together with their film, the McCoys expose and yet retain the magic of movie-making. We can see the working parts of the apparatus, but are still won over by the whole. The sets themselves are an exploded spatial view of what one experiences temporally in film.

The images are shot by several cameras simultaneously, each from its own angle, each focused on a different area of the set, and the multipart compound of images that these cameras together create is then sent to a computer running custom software that picks from the range of choices, “editing” it into the seven movies.The McCoys handle the passage of time by spreading “actors” and locations out in space to represent different moments, which are then intercut onscreen to suggest movement in time and place. Each story is told in six to ten shots.

“A magical shift occurs: the instantaneous translation of a physical space distributed over a large horizontal field, in which everything exists simultaneously and three-dimensionally but without movement, into a flat visual space on a vertical screen, in which nothing has any physical depth and in which physical simultaneity is converted into temporal sequence and action...The McCoys' new piece “Soft Rains”, intricate and entertaining, is rooted in the history of film, which, however, with slice-and-dice aplomb, it chops into a new form: its cinematic syntax is parsed not by any familiar story-telling ambition but by the electronic synapses of the computer.”
DAVID FRAENKEL
from catalog essay for the "Soft Rains" exhibition at Sala Rekalde in Bilbao

In the rear gallery, the McCoys present “Our Second Date”. This piece extends the form of “Soft Rains” by including the artists themselves within the constructed narrative. In “Our Second Date”, the couple can be seen watching a movie which is being created adjacent to them on a rotating set. This piece begins a new cycle of work which examines the role that media has played in the development of the artists' relationship.
“Soft Rains” is a project supported by FACT and Creative Capital with assistance from Eyebeam. It premiered in September 2003 at FACT Centre, Liverpool, U.K. and toured to Sala Rekalde in Bilbao in March of 2004.
Since their first exhibition at Postmasters in April 2002, Jennifer and Kevin McCoy had solo exhibitions at The Butler Art Institute in Youngstown, Ohio, San Jose University Art Gallery in California, Van Laere Contemporary Art in Antwerp, and Galerie Guy Bartschi in Geneva. They participated in the Future Cinema exhibition (2002-2004) organized by ZKM Center for Media Art in Karlsruhe, Germany and later traveling to Kiasma Museum in Helsinki, Finland and Intercommunication Center (ICC) in Tokyo.
McCoys' works were included in Animations shows at PS 1, New York and Kunst Werke, Berlin (2002-2003), as well as in recent acquisitions show at The Metropolitan Museum in New York (2003). Presently their work is shown in Open House at The Brooklyn Museum in New York This July the McCoys will participate in SITE Santa Fe's Fifth Biennial Exhibition Our Grotesque, curated by Robert Storr. In the fall of 2004 they will present new works at two shows: at Vilette Numerique in Paris, in an exhibition Zones de Confluences, curated by Benjamin Weil , and in Terminal Five exhibition, curated by Rachel Ward and staged in TWA terminal at JFK Airport in New York .