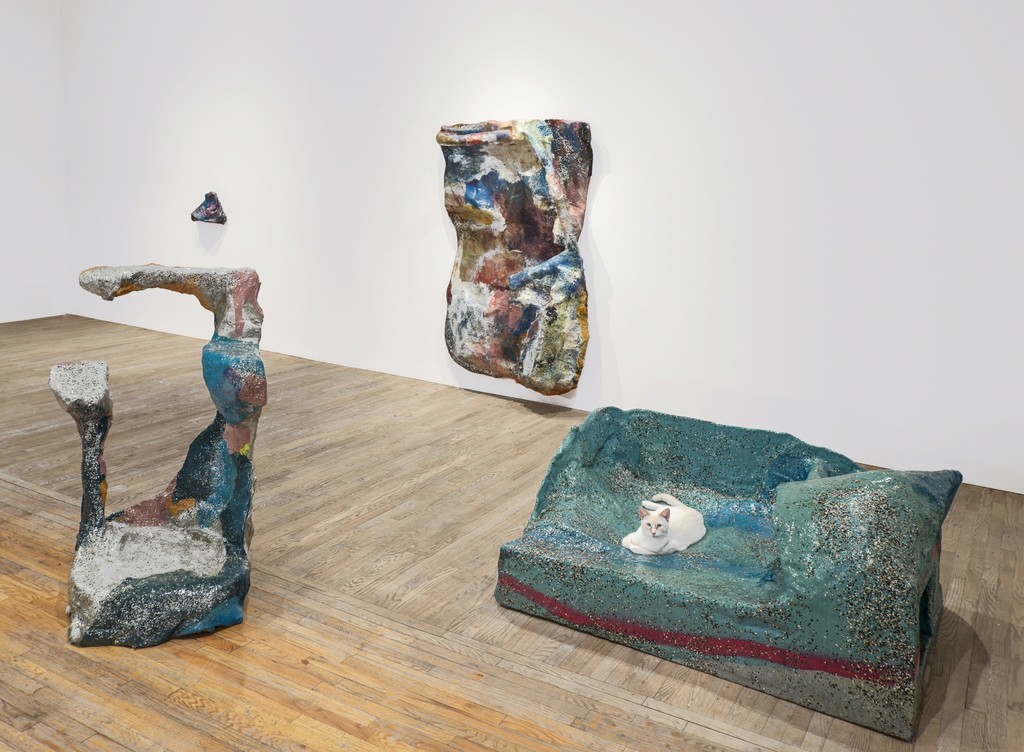 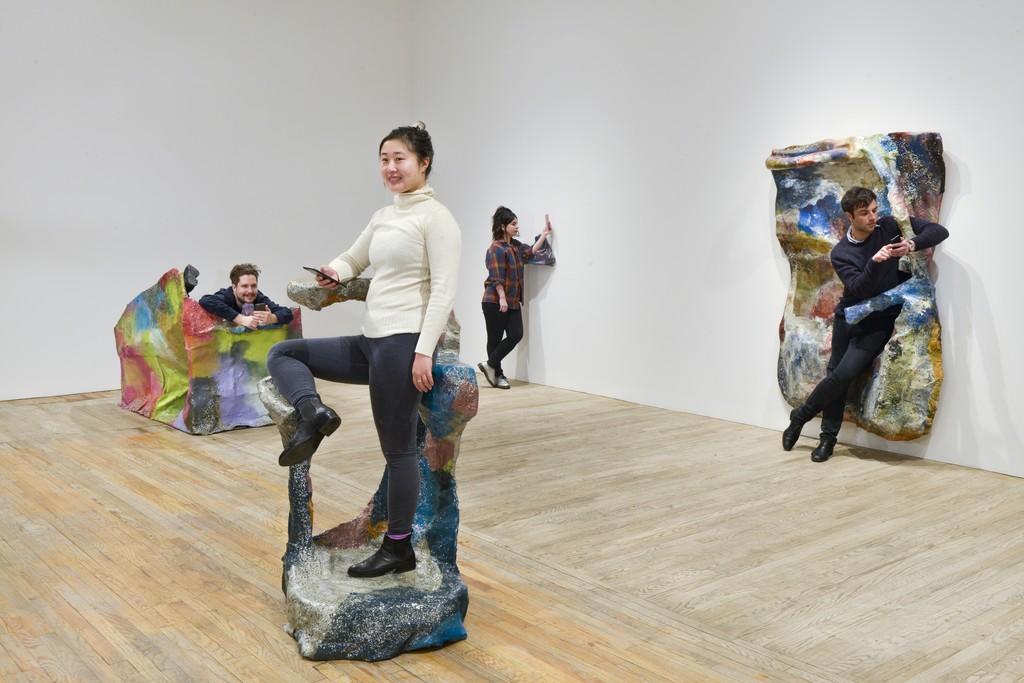 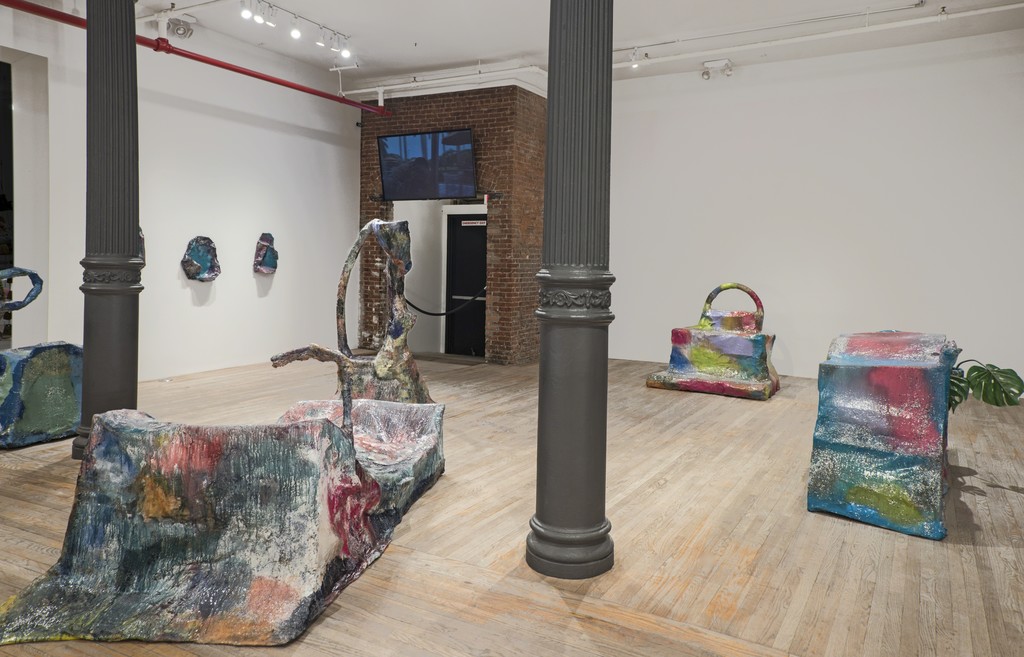 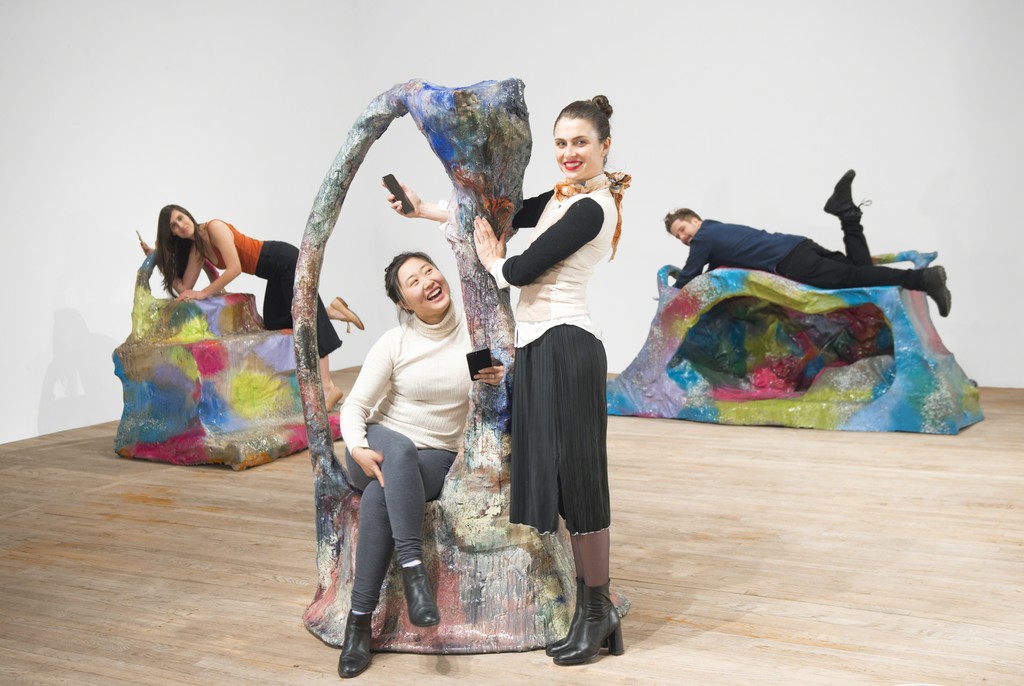 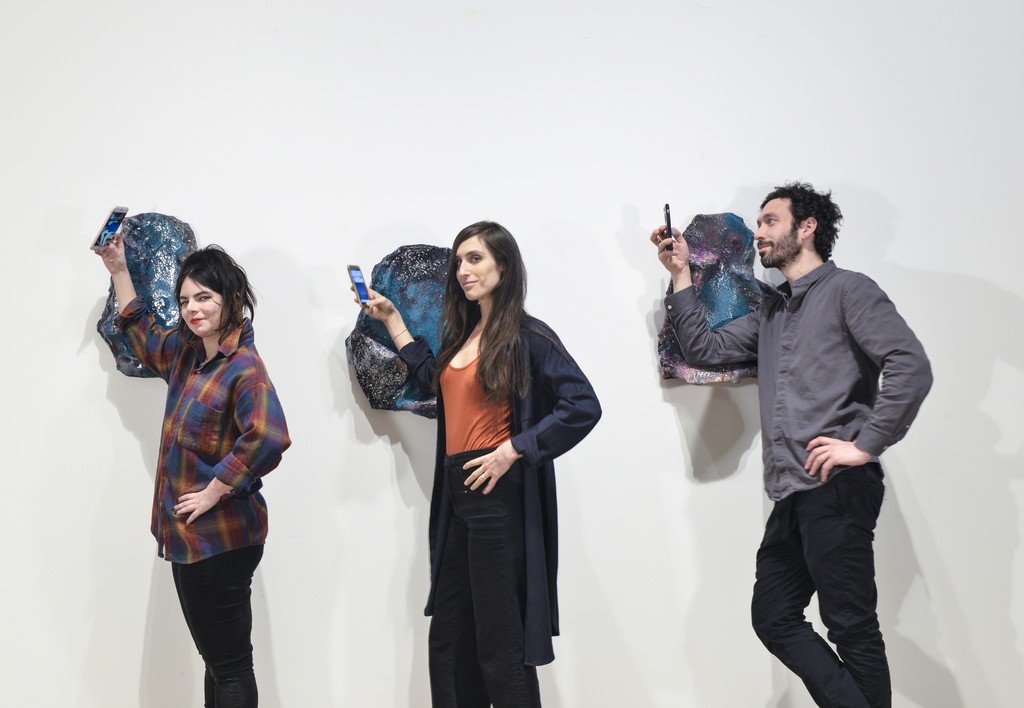 There is a variation of Rudolph Zallinger’s iconic “March of Progress” illustration that depicts the same progression with the addition of a final figure, hunched over a keyboard in front of a computer, its posture mirroring that of the ape at the beginning of the sequence. Its titled, “Something, somewhere went terribly wrong.”

Mayer responds to our postural decline with a positive solution: Slumpies. These utilitarian sculptures, which the artist began producing in 2016, accommodate and encourage cell phone usage. Each anticipates a particular gesture that is the result of holding a phone or digital device, giving shape to the negative space around a bodily form. Ranging in scale from tabletop to large-scale floor and wall pieces, made primarily of fiberglass and resin, and painted with colorful oils and acrylics, the works are whimsical and welcoming, sturdy enough to climb on and comfortable enough to lounge in, alone or with a partner depending on the design.

In a recent article for ARTnews, Carolyn Twersky writes that “Slumpies can resemble deformed rocks that have been repeatedly vandalized with paint, [acrylic flakes], and the odd plant. They are ‘purposefully bulky, cumbersome, quasi-utilitarian,’ Mayer said in a recent interview. They’re inspired by the less-than-elegant forms that people’s bodies take when they interact with phones — a stance that can only be described as ‘slumping.’” Their non-sleek functionality brings to mind the works of Franz West, while the medley of materials and textures call upon Jessica Stockholder and Rachel Harrison.

Our phones are surrogates for sociality. Even when we’re surrounded by people, we’re compelled to respond to our digital networks, and to the endless possibilities these exchanges seem to promise. It’s a reality that’s often judged, or portrayed in the media as the decline of civilization as we know it – a fear of technology that predates the Luddites, also evinced in the variation of Zallinger’s illustration. “Text neck,” “tinder finger,” and “cell phone elbow,” are just a few of the emergent “syndromes” unique to the smartphone era, which Slumpies cheekily cure. Slumpie Promotional Video 1 and 2 are commercial-like video works that draw inspiration from infomercials, inciting the semi-satirical call to action: “Aren’t you tired of holding up your neck while you text?”

Slumpies have a built-in obsolescence: the smartphones of today won’t be around forever, or even much longer. As technology inevitably changes, ushering in a new set of social conventions, Mayer's sculptures will be lasting artifacts of a cultural moment and its hyper-specific gestures.

Named one of the “25 New Faces of Independent Film” by Filmmaker Magazine, Mayer has participated in film festivals including Sundance, SXSW, Rottenberg, and the New York Film Festival. She is a fellow of the New Frontiers Lab and the New Narratives on Climate Change labs with Sundance Film Festival, and is the co-director of Borscht Corp, a non-profit film and art collaborative in Miami, Florida.