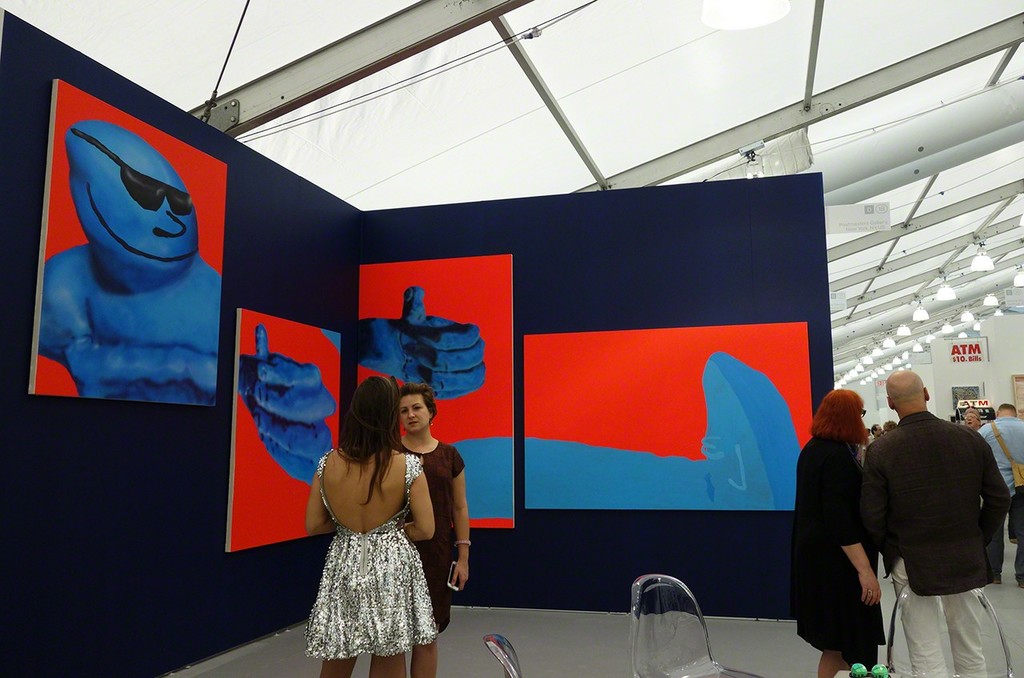 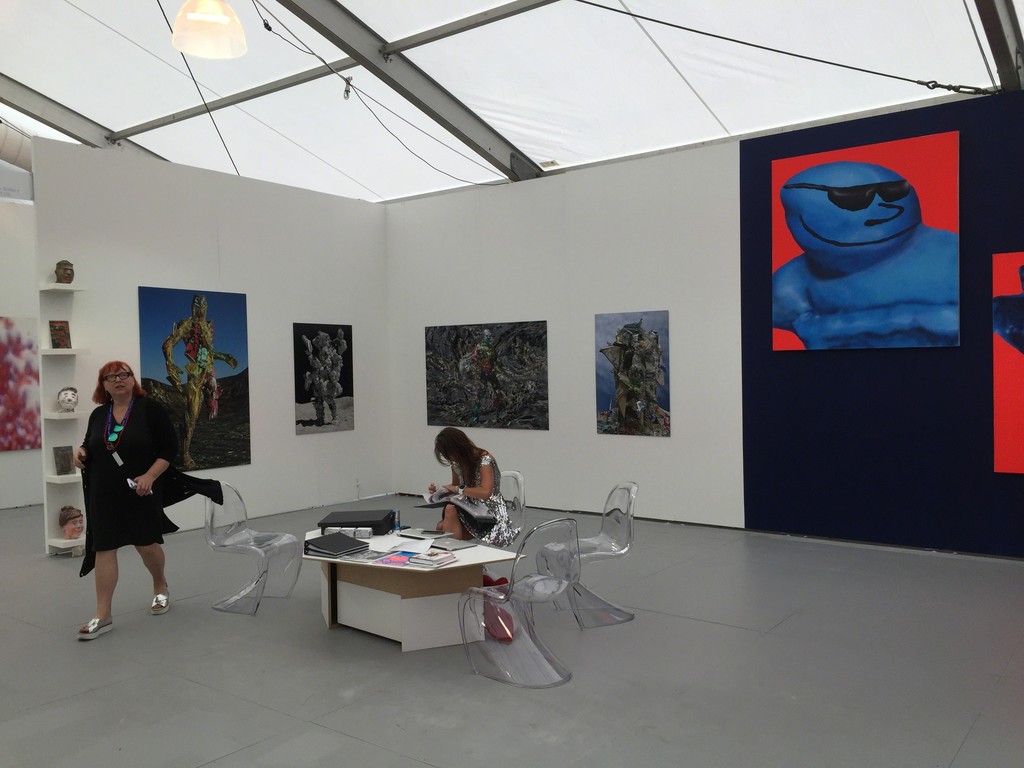 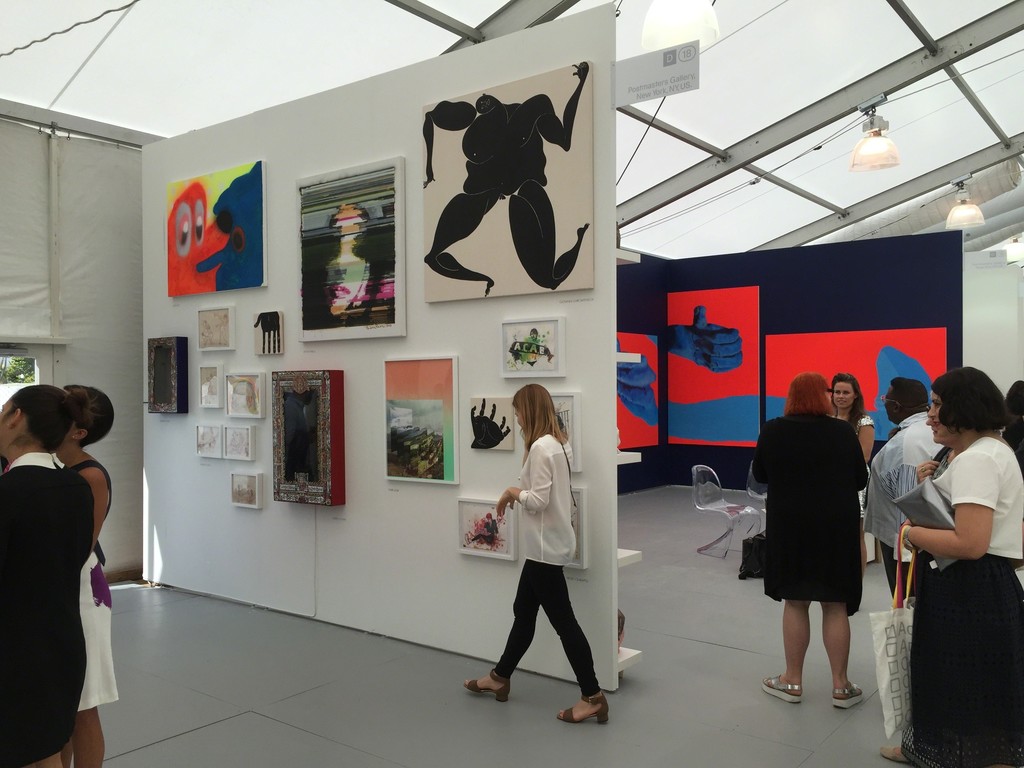 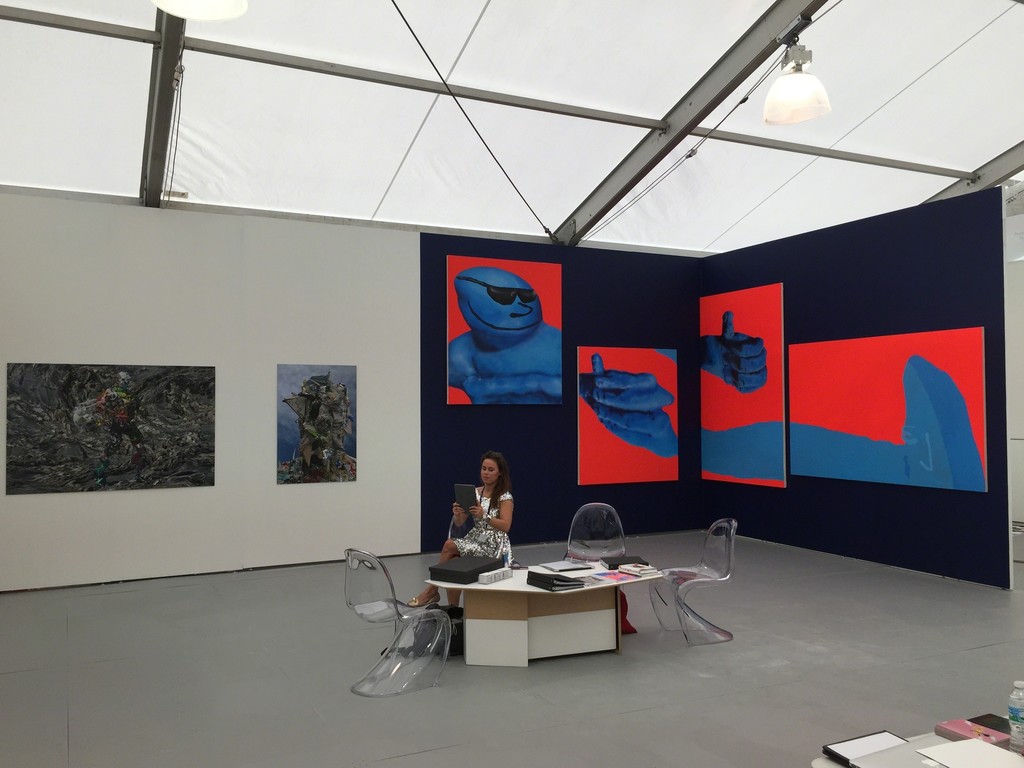 Postmasters presentation at UNTITLED focuses on the idea of portraiture (of characters real and imagined) that reflects our moment in time, the available current technologies, and the ever growing popular fascination with portraits over social media platforms.

With paintings, sculpture and 3D rendered prints Austin Lee and Shamus Clisset create a dynamic, futuristic, sci-fi environment reflective of the most contemporary impulses in art making. Both artists are of the generation that can be called “digital natives” for whom that realm is natural, organic and matter of fact.
Austin Lee - a young painter, Yale graduate, whose recent exhibitions received great critical attention - mixes tradition with Internet aesthetics. Lee usually makes sketches on an iPad then loosely translates the compositions onto canvas using airbrush and fluorescent flashe acrylics to retain vivid garishness and luminosity of the screen. The characters in his paintings could be described as cartoons with a soul. Few quick gestures convey emotions of the portrayed subject through sprayed lines and fields of color. Lee has also developed a series of portrait sculptures, scanned, 3D printed, then painted.

With economy of means, [Lee] serves up prodigious psychological turmoil, his faces registering many varieties of pleasure and fright. They’re James Ensor’s masks or Peter Saul’s monsters updated for an age in which identities no longer hold their shape for long.

While Hockney presented works on iPad that look like someone trying to make ‘proper’ paintings that transcend the limits of digital painting tools, Lee’s art revels in those supposed limitations. While Hockney’s paintings look like the carefully worked products of an old man who has stumbled across the joys of the digital but whose thinking is rooted in the analogue world, Lee’s work transfers a digital aesthetic on to canvases

Making images purely from data, Shamus Clisset creates virtual reality. Nothing we see in his works has ever existed; not the characters, the objects, the scenarios, the landscapes. It is the capabilities of the 3D software he uses to render hyper-detailed, realistic imagery. Science meets magic in Clisset’s large-scale, constructed pictures - an alternative world of totemic figures and tableaux. His characters transform the familiar, analog world into glistening high resolution/high intensity uncanny alternative.
To encounter Shamus Clisset’s digital universe rendered in an impressively large format is like looking through a window at a parallel universe. The high-resolution images appeared to be directly in dialogue with the history of painting — particularly portraiture — and lingered on the meanings and limitations of representing American masculinity. It is hard to find an artist who can examine masculinity these days without reducing their art to a testosterone-infused mess of bro-titude, but Clisset does it effortlessly.