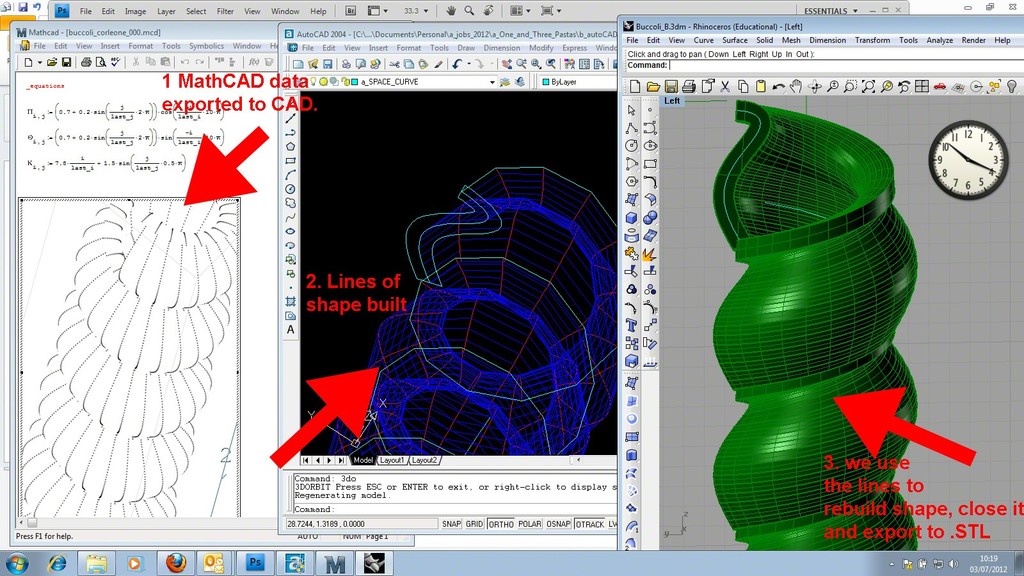 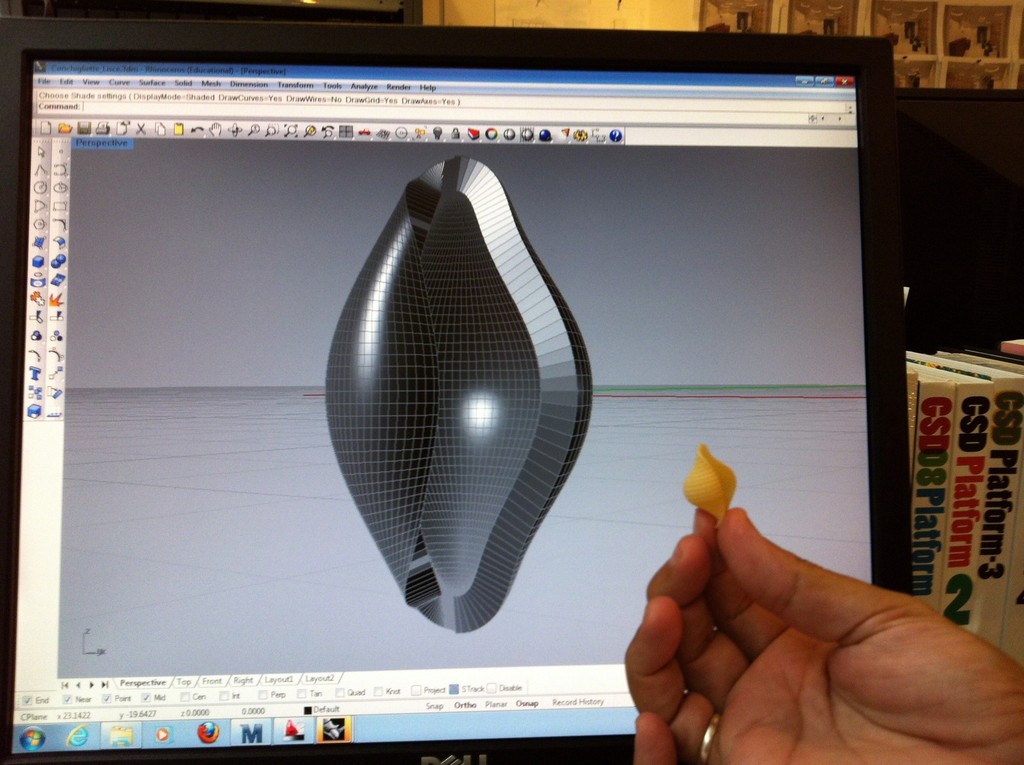 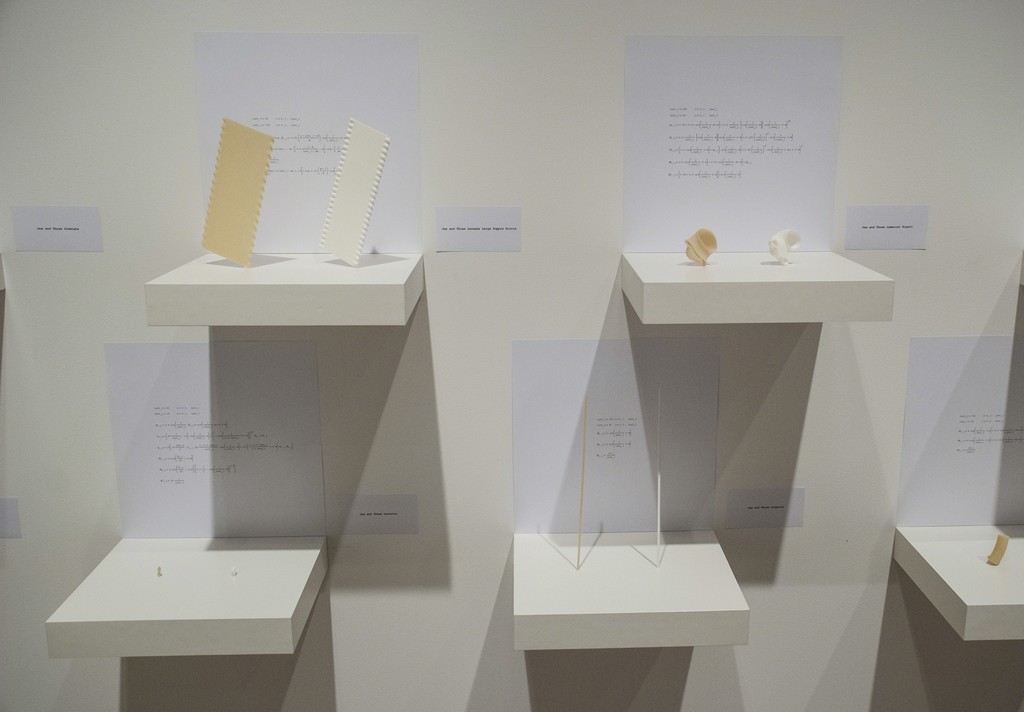 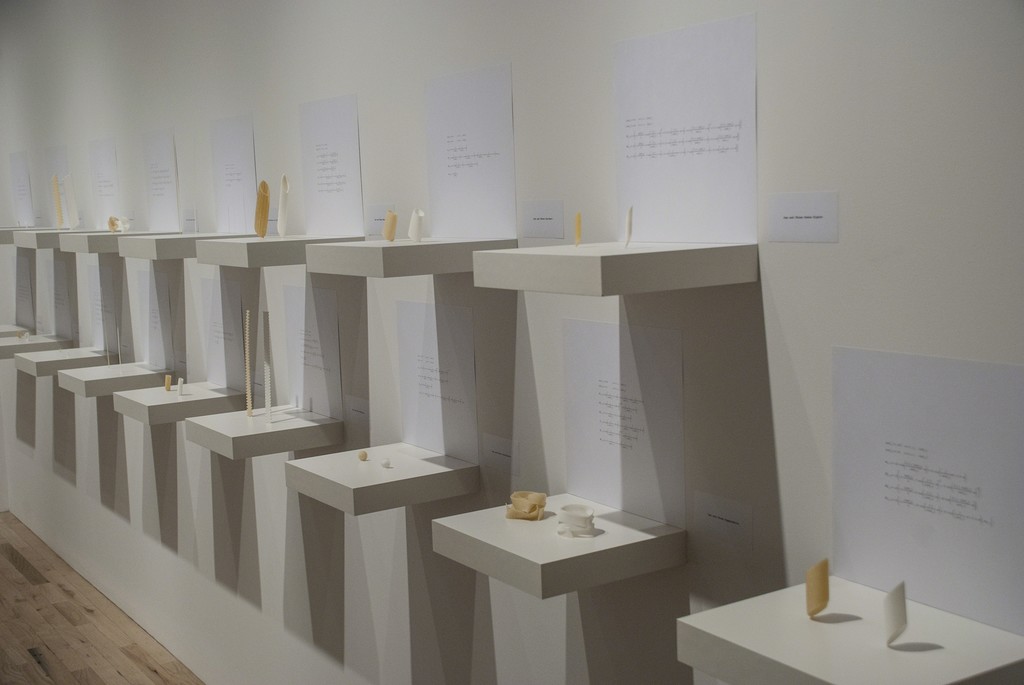 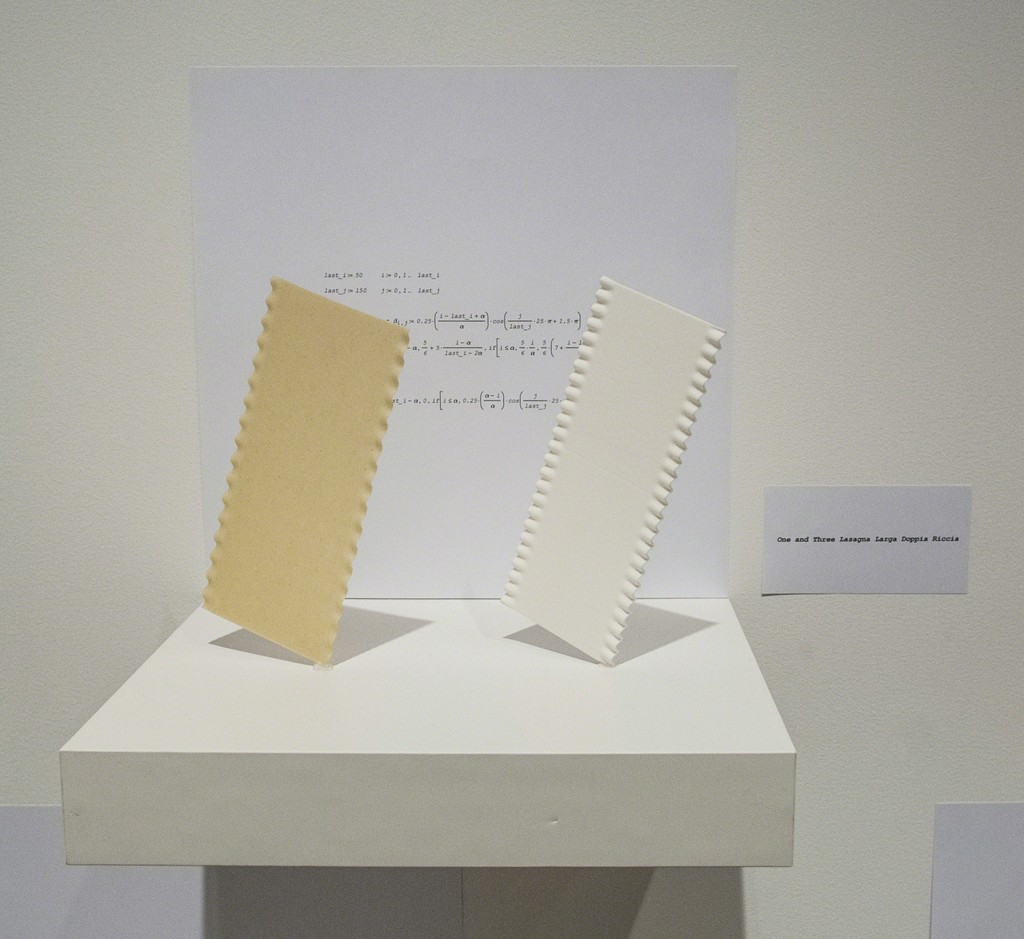 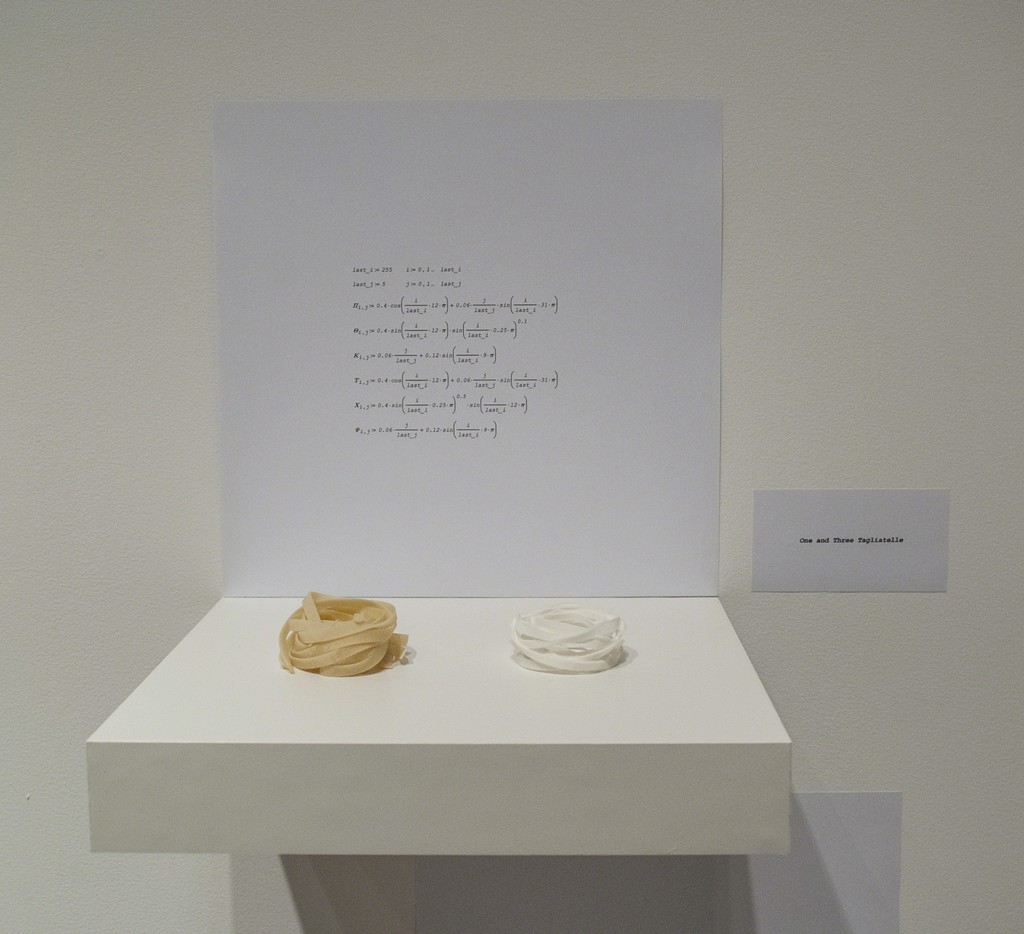 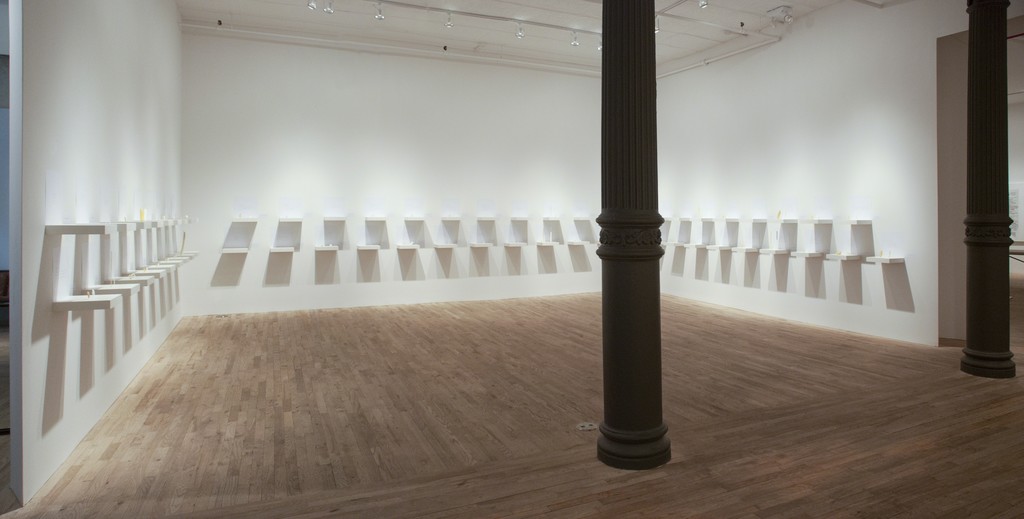 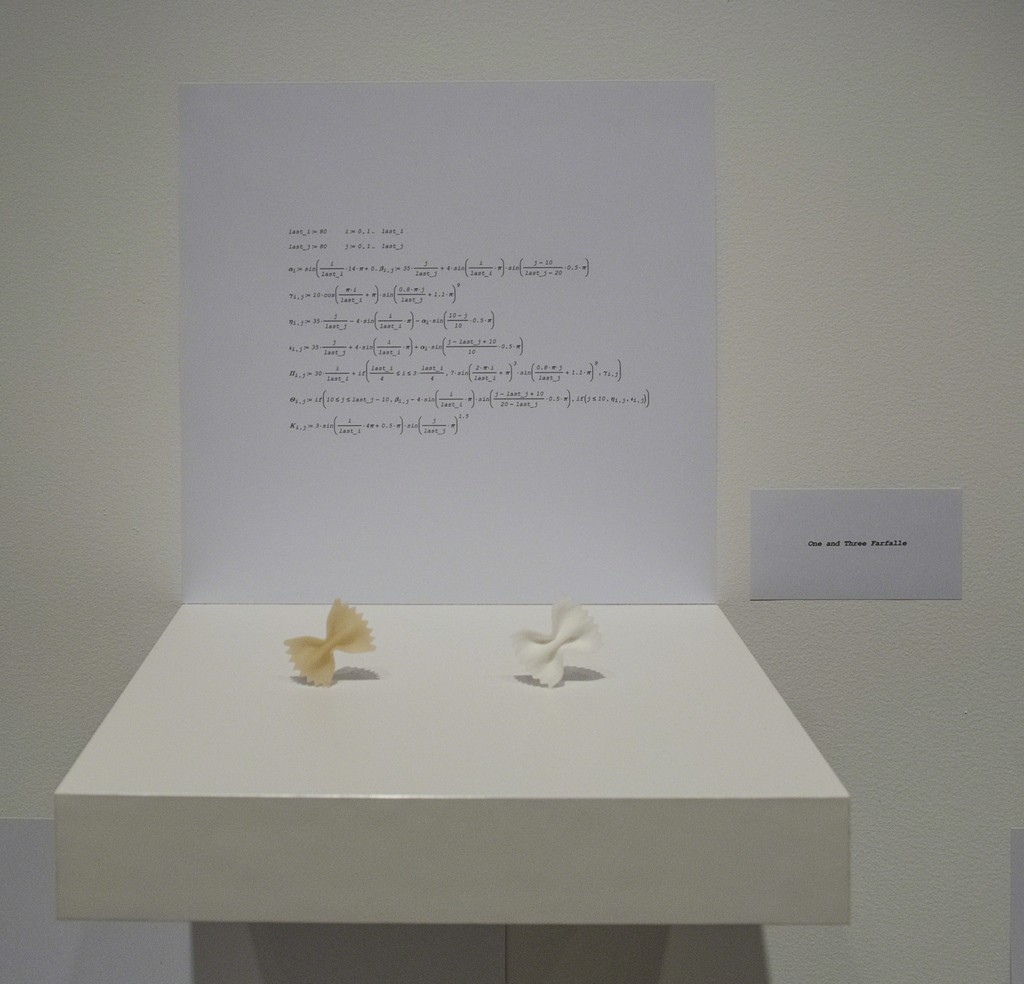 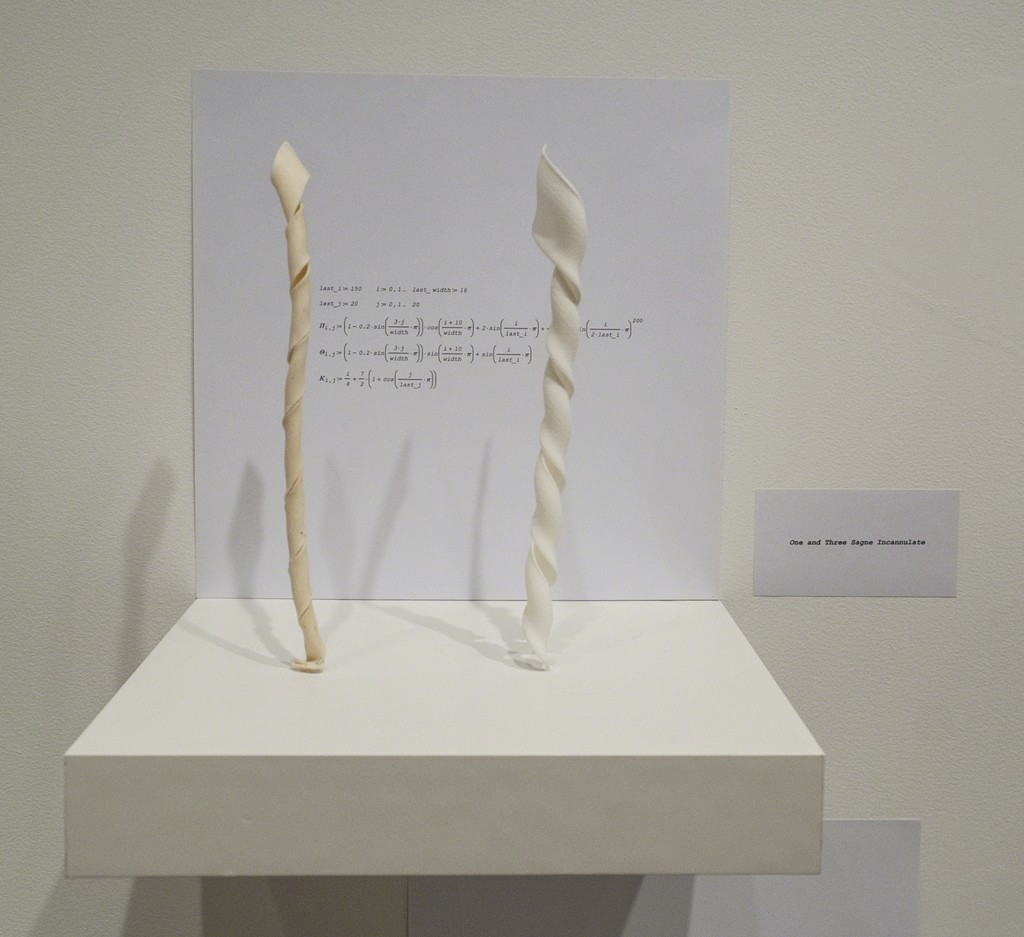 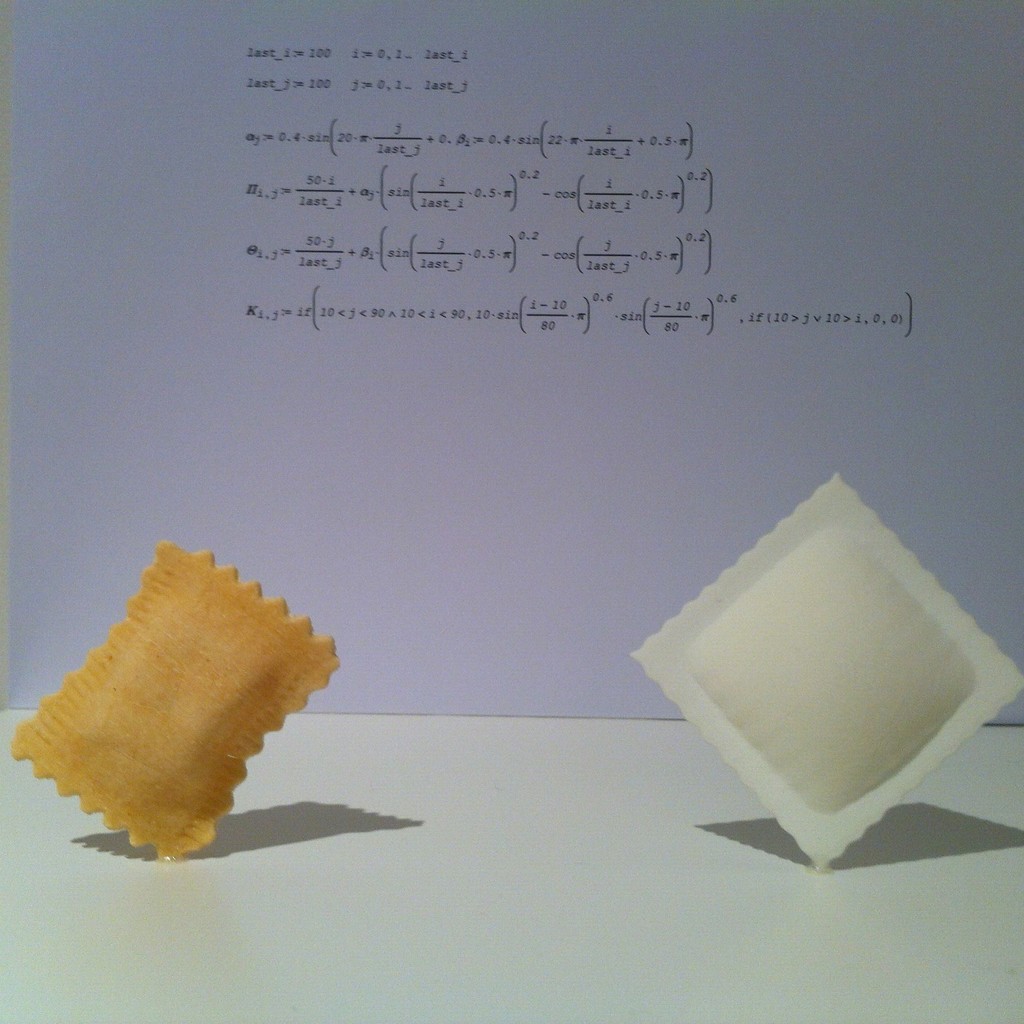 One and Three Pasta deals with two men's absurd passion for an almost worthless object.

Imagine different kinds of pasta as design objects: the distinct shapes of farfalle, fusilli, rigatoni, spaghetti, penne and 87 others.

Imagine each pasta shape converted into a mathematical formula.

Imagine each formula used to print a 3D replica of the original pasta.

Taking Joseph Kosuth's One and Three Chairs (1965) as a conceptual model, the exhibition at Postmasters will consist of 92 shelves, each with a single pasta unit, its mathematical formula, and its 3D printed incarnation.

Since 2011 Serkan Özkaya sought to curate an exhibition installing various types of pasta as art objects, their creators anonymous, their commercial value minuscule.

It never happened. Subsequently Özkaya came across the publication titled Pasta by Design by the designer George L. Legendre. The book's idea was eerily close to Özkaya's plan for the exhibition: Legendre had approached pasta varieties as design objects, analysing 92 different types in order to figure out the mathematical equations describing each seemingly organic shape with loving precision. He had effectively reversed the formula-to-form process. Özkaya contacted Legendre and they have collaborated to move the project to stage three: transforming the pasta equations into individual, 3-D printed objects.

To parallel Kosuth's thinking Legendre's equation can be considered the eidos, the Platonic ideal, the essence of the pasta itself. The exhibited pasta are organic and as such are each unique. These real pieces might be flawed and temporary but their computer generated models -- the incarnation of the eidos itself -- are perfect and permanent. Yet inedible. In One and Three Pasta the real, the ideal and the re-presented offer the decidedly unholy trio of options and differences.

Born in 1973 in Istanbul, Turkey, and presently based in New York, Serkan Özkaya is an artist whose work deals with topics of appropriation and reproduction, and which typically operates outside of traditional art spaces. David (inspired by Michelangelo), perhaps Özkaya's most notorious project, is a sculpture made from styrofoam and gold leaf, two-times the size of the original. Initially created for Istanbul Biennale 2005, it collapsed during installation.

Remade, David is now - after an inter-continental trip in 2012 - installed in front of 21c Museum in Louisville, KY. Özkaya's project Mirage initiated Postmasters Gallery's new space in Tribeca last June. Özkaya is the author of ten books, including Today Could Be a Day of Historical Importance (artwithoutwalls, 2010), and The Rise and Fall and Rise of David (21c Museum and Yapi Kredi, 2011). His new book with Storefront for Art and Architecture Double was published in September 2013 by Lars Muller.

Born in Paris in 1970 George L. Legendre is the principal of IJP Architects in London. His quirky fusion of design, mathematics and computation first took off in print, starting with IJP: The Book of Surfaces (AA Publications, London 2003). Part publisher's spread and part mathematical surface, this playful manifesto was followed by Henderson Waves in which his eponymous office deployed similar principles to design and build the tallest pedestrian bridge in Southeast Asia. Pasta by Design where Legendre has profiled different kinds of pasta, classifying them into types using 'phylogeny' (the study of relatedness among natural forms) was published by Thames and Hudson in 2011. An associate professor of architecture at Harvard, Legendre has been visiting professor at ETH Zurich (2000), Princeton University (2003-05), and the London AA School of Architecture (2002-08).