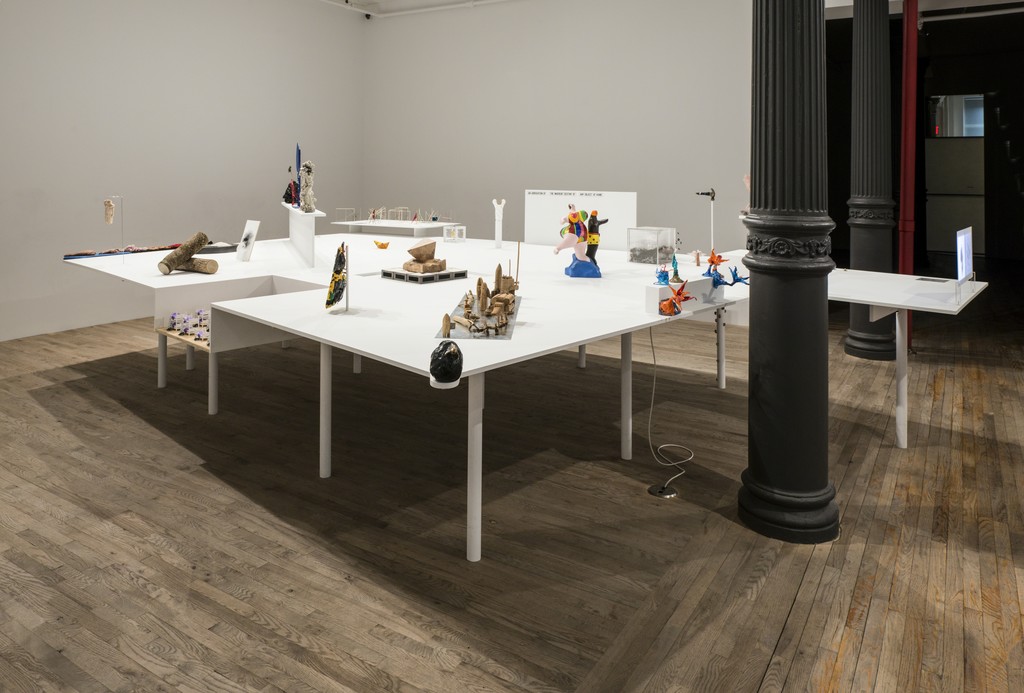 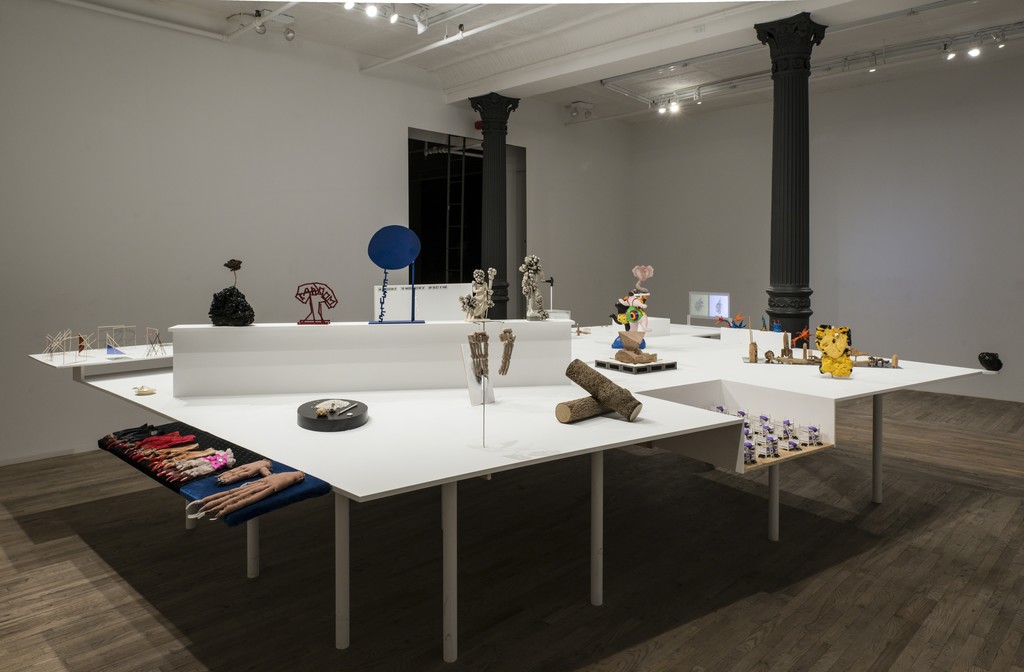 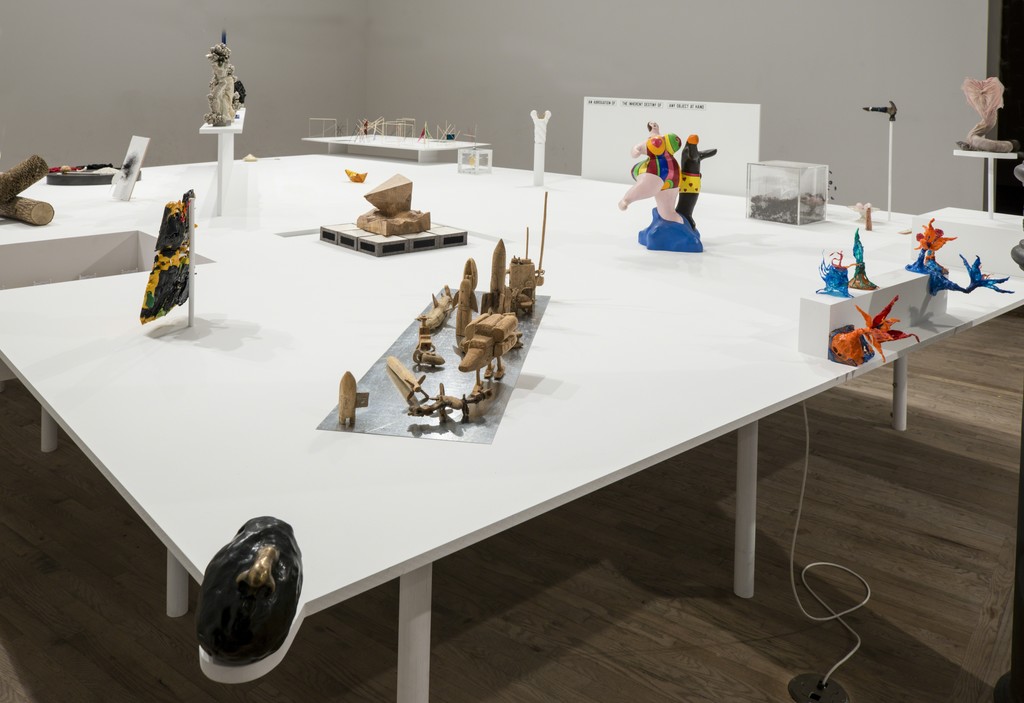 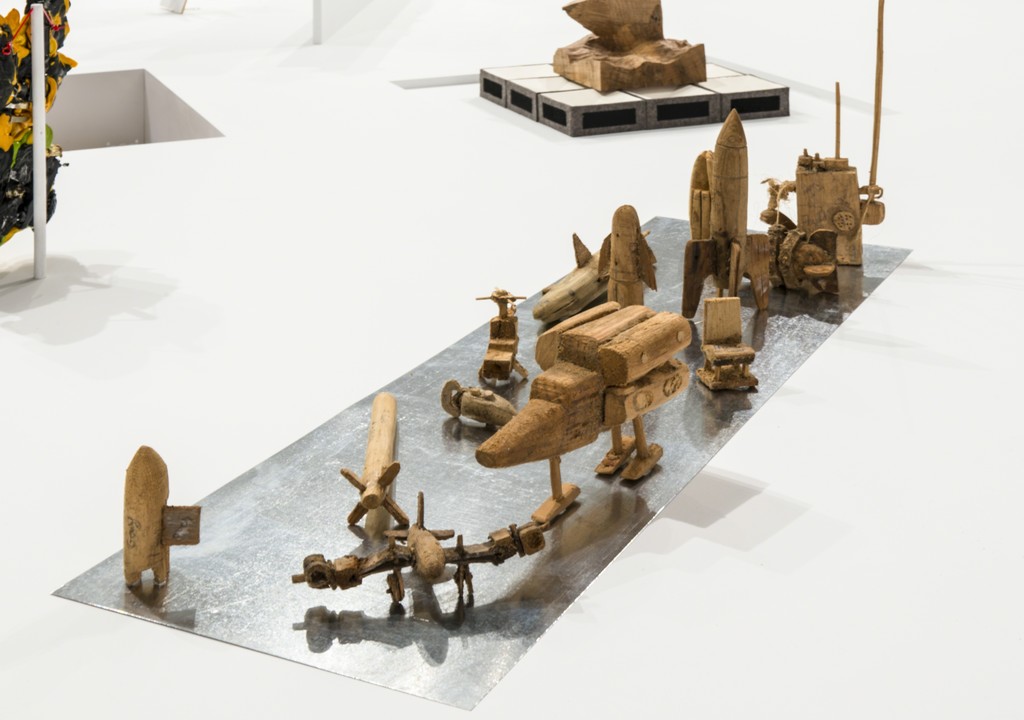 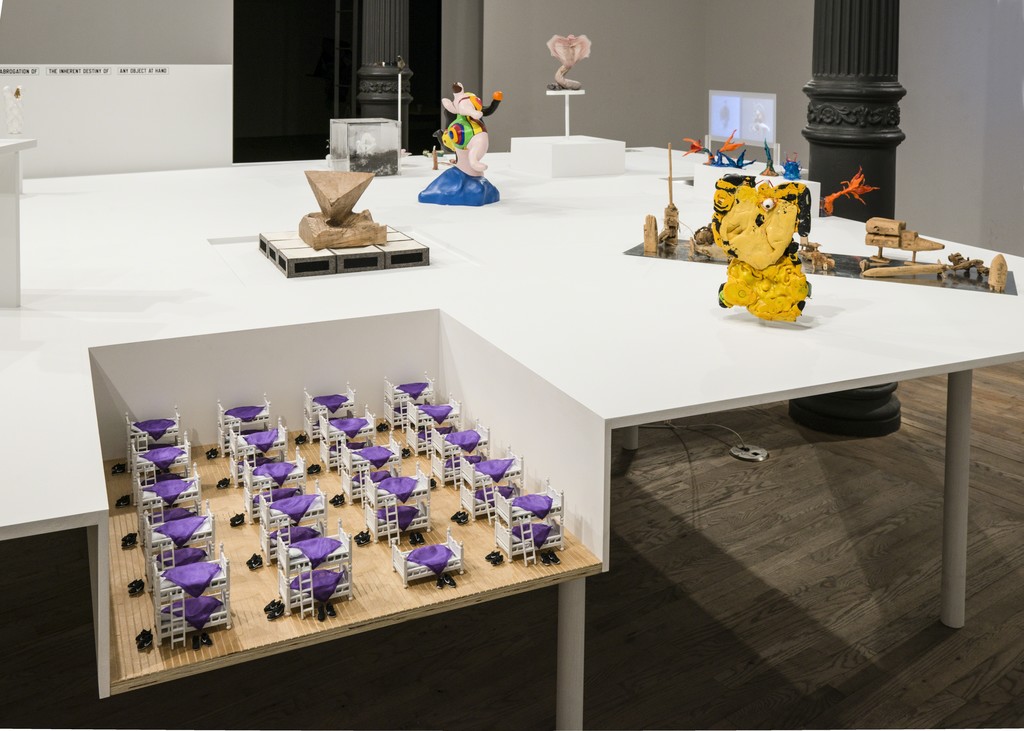 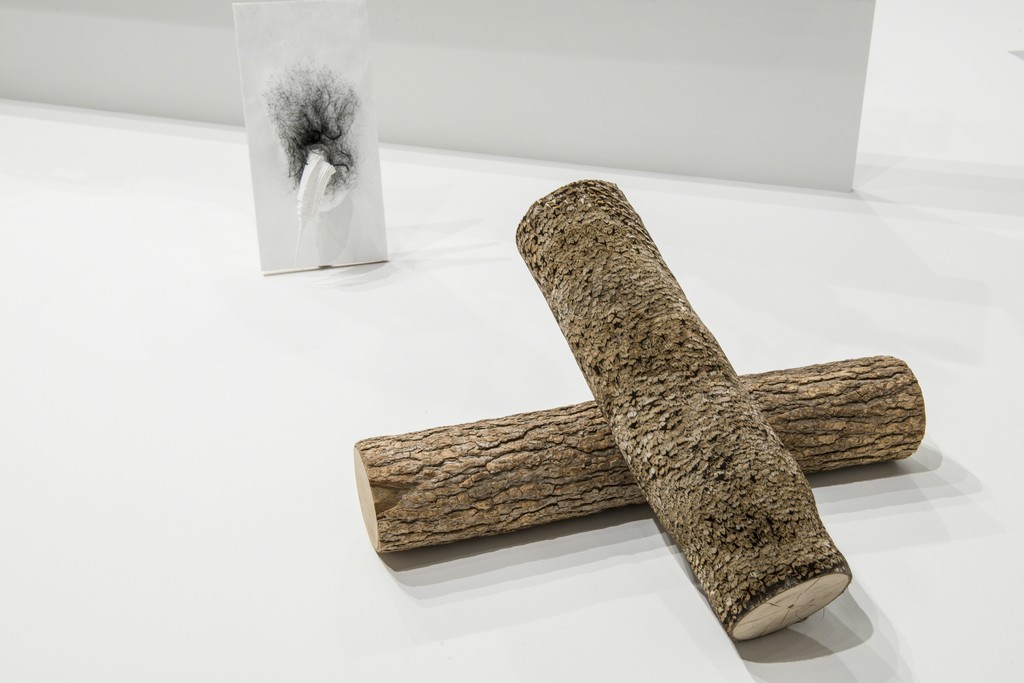 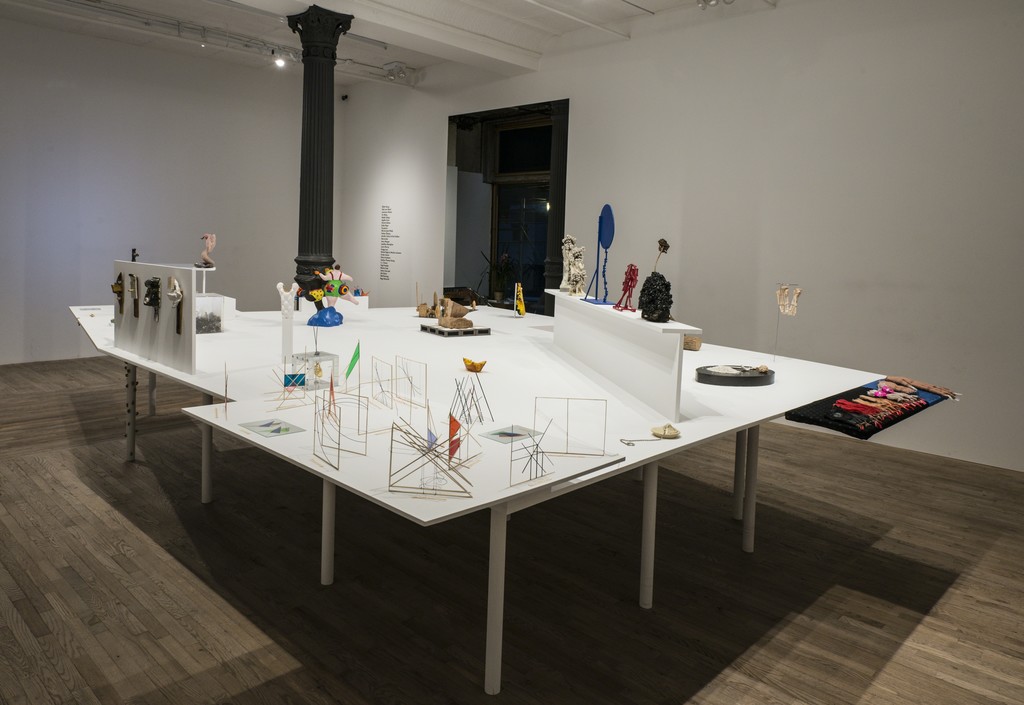 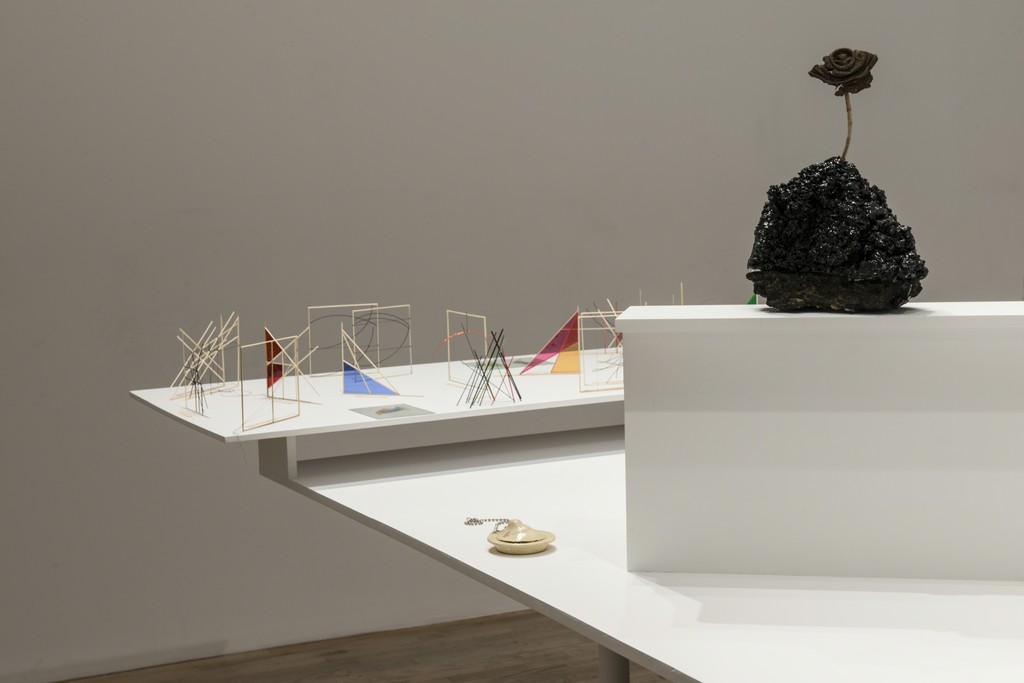 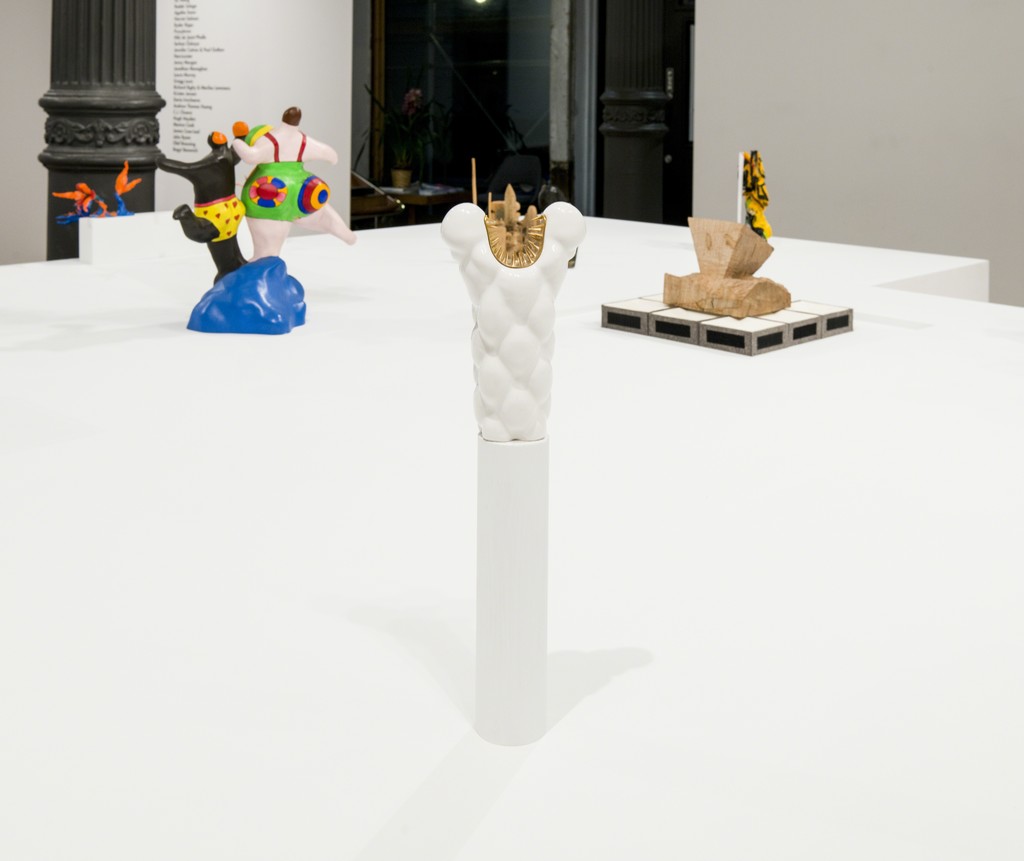 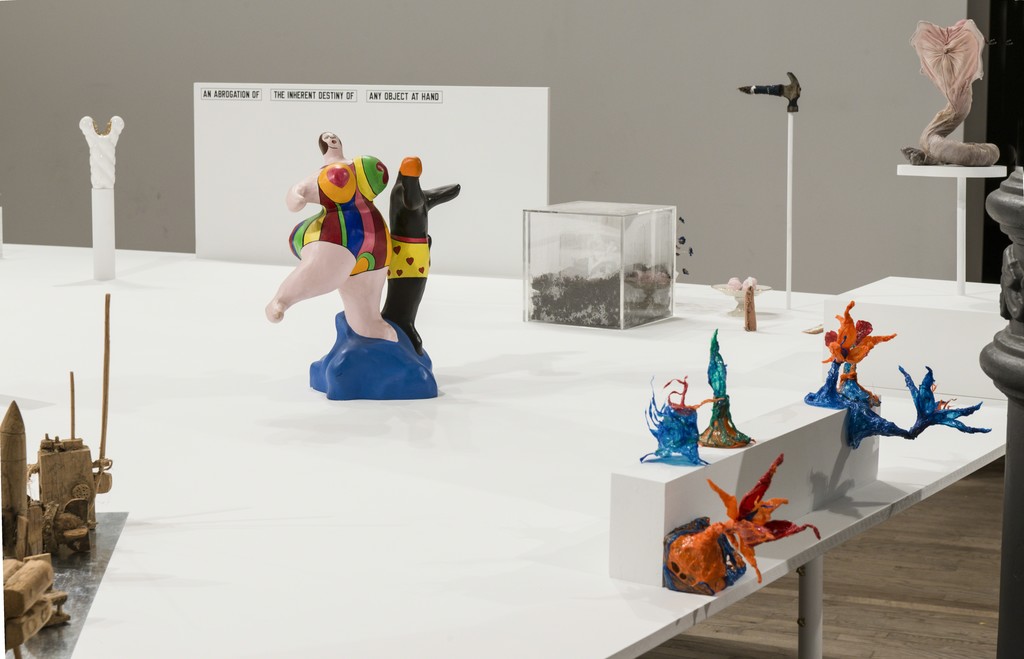 Postmasters is pleased to present an exhibition of small sculptures and big ideas. The works in the show - made from porcelain (both sculpted and 3D printed), ceramics or bronze, as well as less traditional materials such as horse manure, pixels, and words - were created by 28 artists between 1980 and now, measure one inch to two feet, and aim to address concepts of love, religious mass suicide, bio-tech spores, vagrancy, identity, alchemy, economic equilibrium and digital artifacts, among others.

This exhibition is my offering for you, the viewer, to rediscover small scale. If you are still at a loss of experience, rub the bronze nose for good luck on your way out.

Artists have an ability to move monumental ideas through their art into our minds and souls. Personally, some of my most meaningful experiences include conversations with artists enveloped by the totality of their preoccupations, obsessions, imagination, knowledge, and interpretations. The title of the exhibition this one is smaller than this one. manifested itself into existence through the mind of the poet Robert Fitterman, during one such memorable conversation around a dinner table.

Roberta Smith is rumored* to have flirted that the best works of art are those which one can take home in a taxi. It is not necessary for art to take gigantic form to convey its supposed meaning(s). The scale is irrelevant if not distinctly premeditated to support a set purpose. The physicality of sculpture has a visceral effect on the viewer's body and so, at the Istanbul Biennial, the small fragile graph sculptures of Richard Ibghy and Marilou Lemmens, made of sticks, string, foil, and paper, immediately seduce the eye as these simple materials is all it took to represent the complexity of economic theories and current statistical data. For this one is smaller than this one. Ibghy and Lemmens reimagined variations of the unattainable concept of the economic equilibrium. Starting off with the graph sculptures, the search began for other modestly scaled representations of grand themes in art.

C. J. Chueca, a Peruvian artist, based in NYC sculpts portraits of the homeless men and women she works with through the Coalition For The Homeless or encounters on streets. Chueca arranges mundane objects, such as dice, erasers, sticks and cardboard to form a portrait, which she then carefully molds by hand into a precious porcelain wall relief, a portion of the sales of which will directly support the efforts of the Coalition For The Homeless.

The mystical axis of evil manifests itself plenty fold throughout the exhibition beginning with the seemingly innocent and seductive ceramic mini cups coated with cancerogenic gunmetal paint by the British artist Elliott Young. Olaf Breuning’s humorous wooden work, Kaboom, is a representation of the not so funny atomic bomb mushroom cloud. Jen Catron and Paul Outlaw restaged the crime scene of Heaven’s Gate deliberate mass suicide. This work is complete with the distinct black-and-white Nike Decades standing beside each of the sect member's 39 miniscule bunk beds.

Global climate issues run with the golden cicada swarms by Laura Murray, plastic predatory botanicals of Bogyi Banovich and Pussykrew’s speculative future life forms - the one-inch, one-cell spores, which result from mutations of biological organisms with machines. The virtual sculptures of Andrew Thomas Huang, cycle in an infinite loop through multiple surfaces, textural incarnations inspired by the philosophy of "hyper objects" by Timothy Morton - the idea that today's objects lack a "discreteness" and instead are pervasive, multidimensional and ever-changing throughout phases of time, space and relative orientation to other objects independent of human consciousness.

Ryder Ripps comments on the question of how does one commodify the popularity of digital ephemera by rarifying one of the most popular internet memes, Pepe The Frog, rendering it in 18kt solid gold – effectively creating the rarest Pepe in the world. This ubiquitous meme started in 2005 and has been seen on everywhere from your mom’s feed to Miley Cyrus’. The meme’s irony is that one digital image can be “rarer” than another, which is also its punchline.

*Rumored because I can’t locate the written reference, but I have it on good authority that Roberta Smith has said this once. ¯_(ツ)_/¯