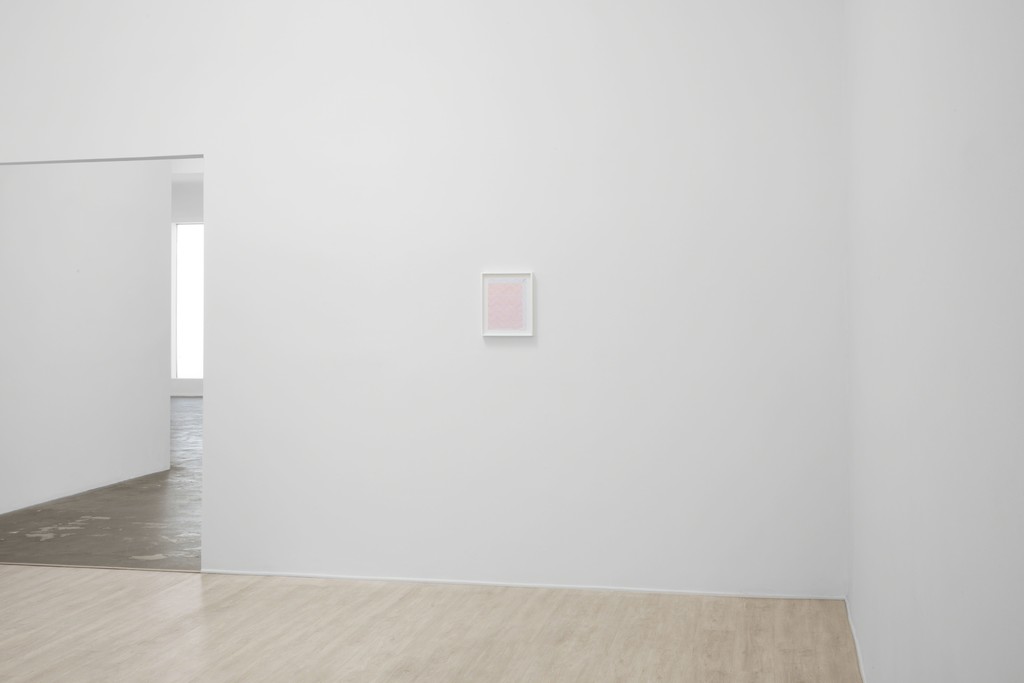 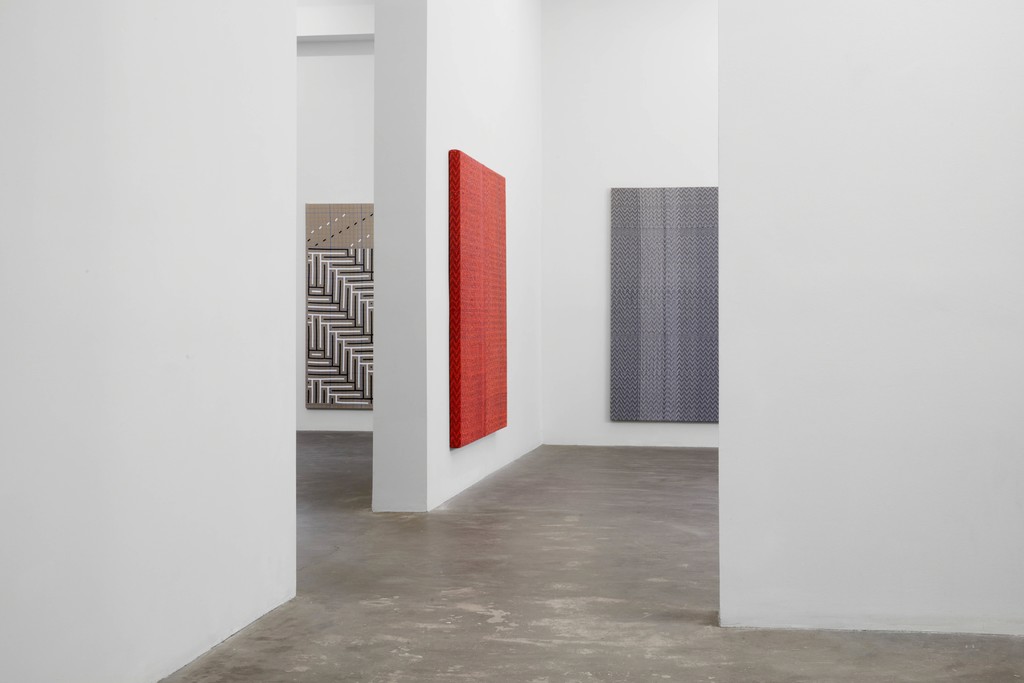 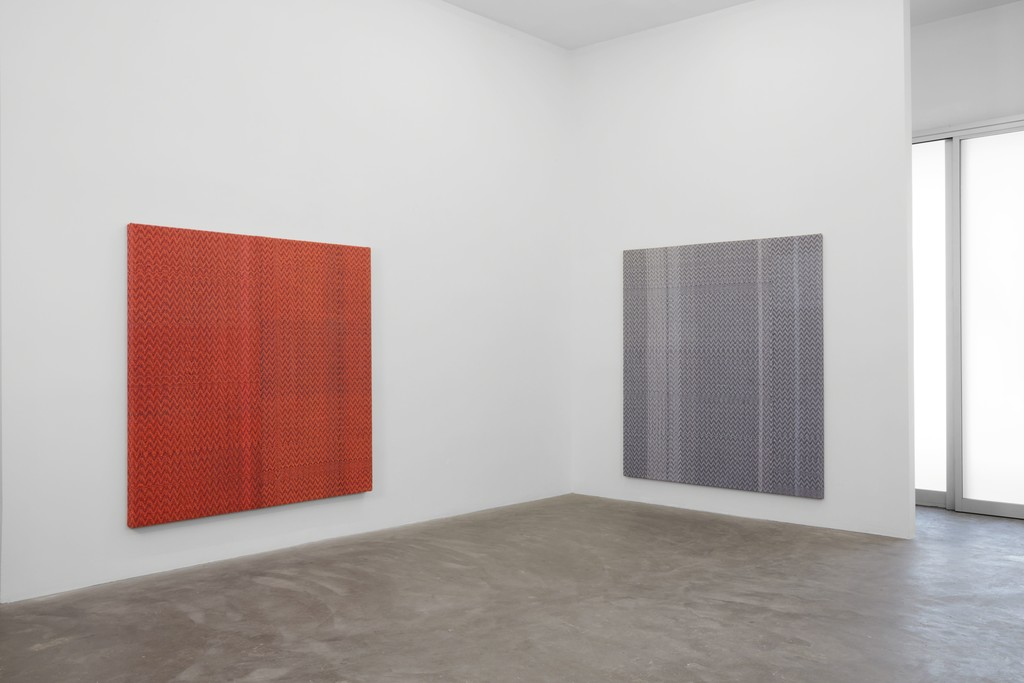 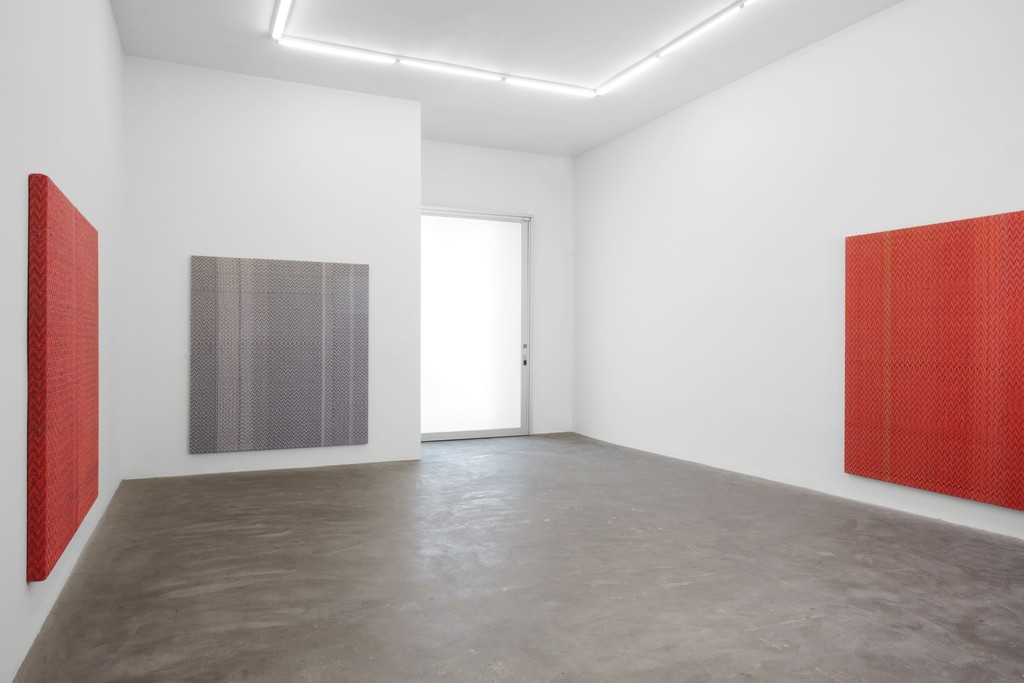 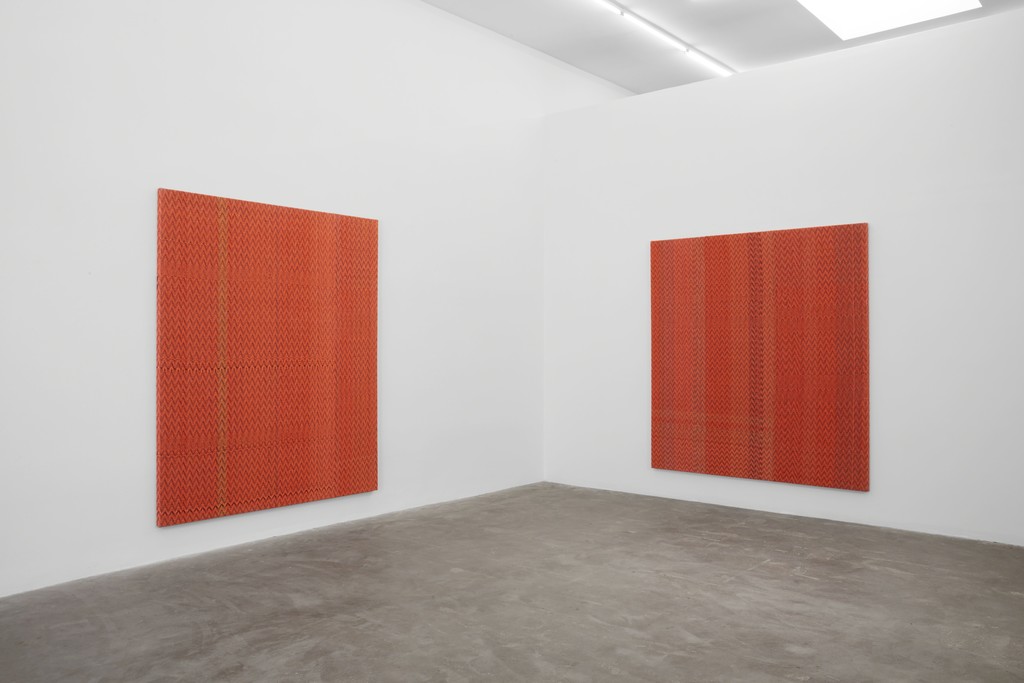 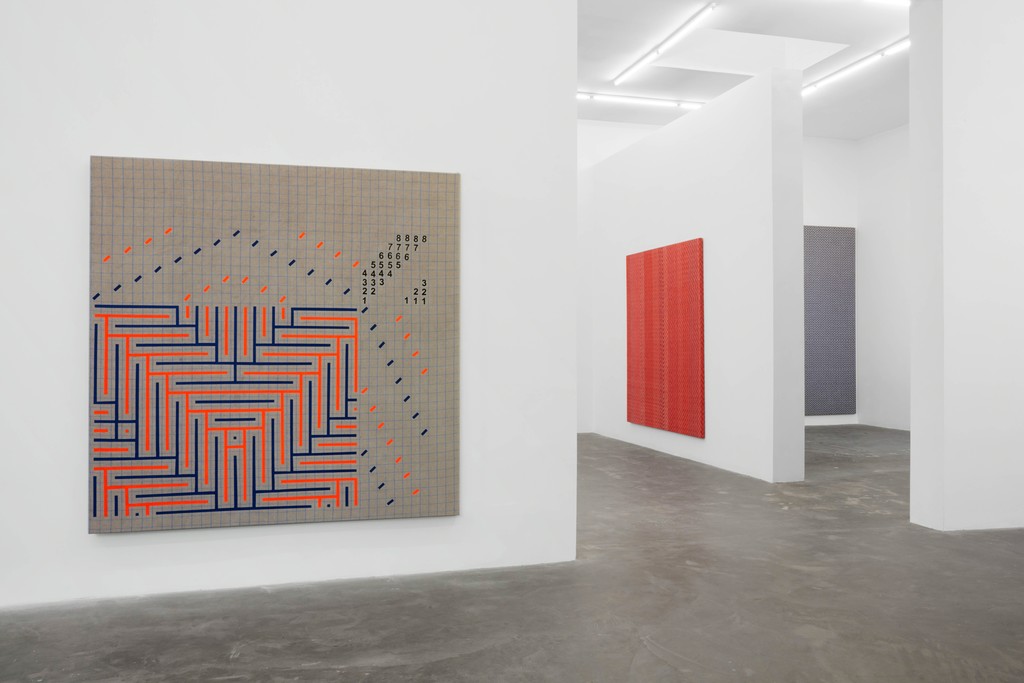 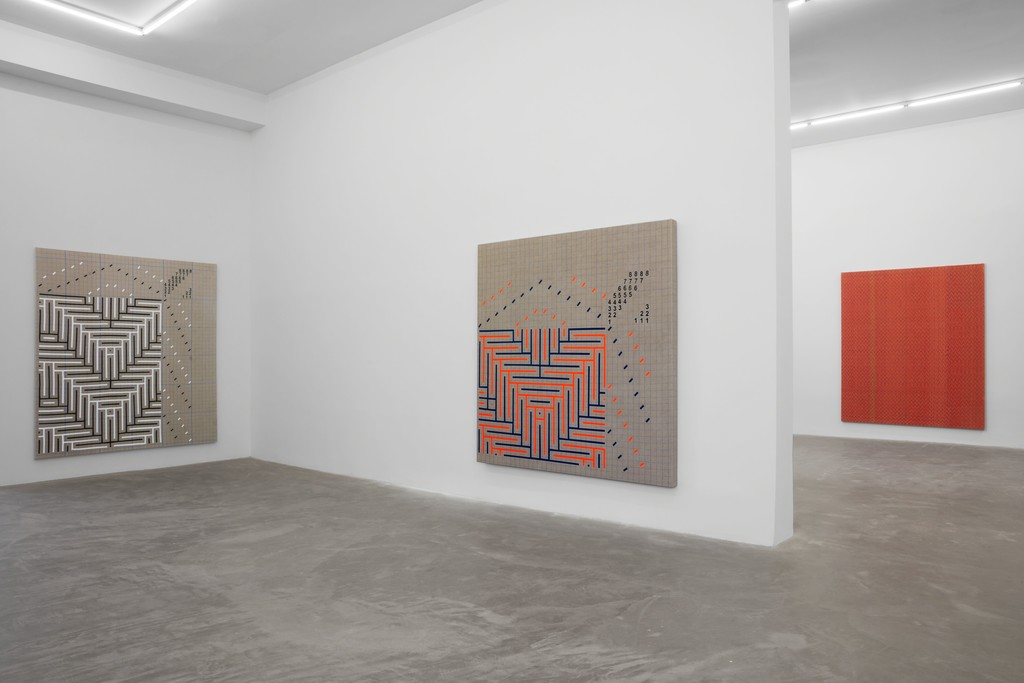 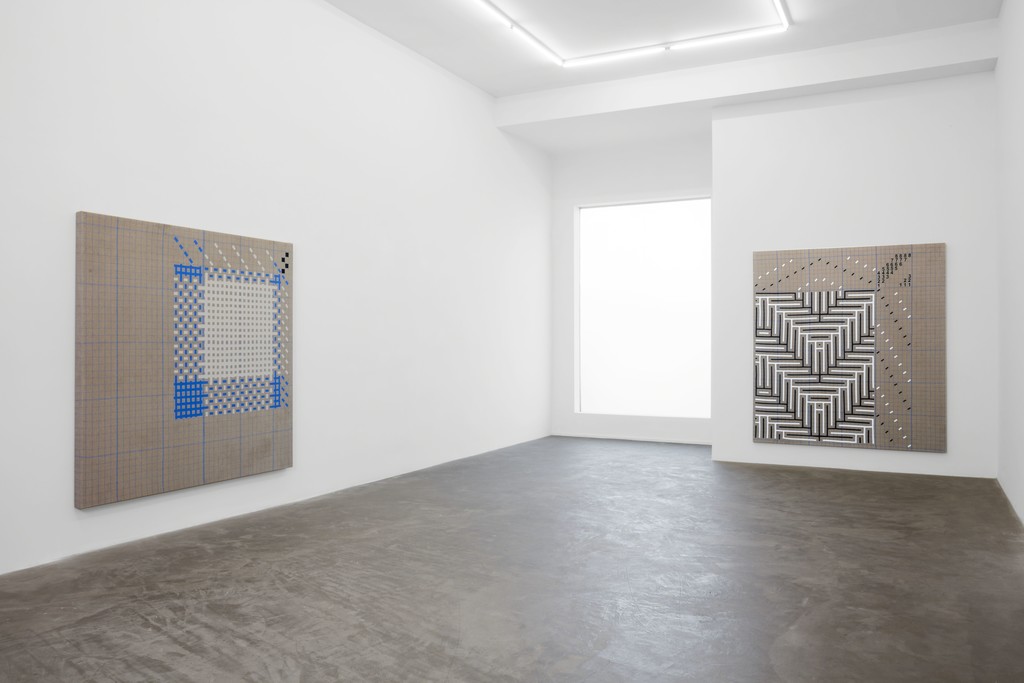 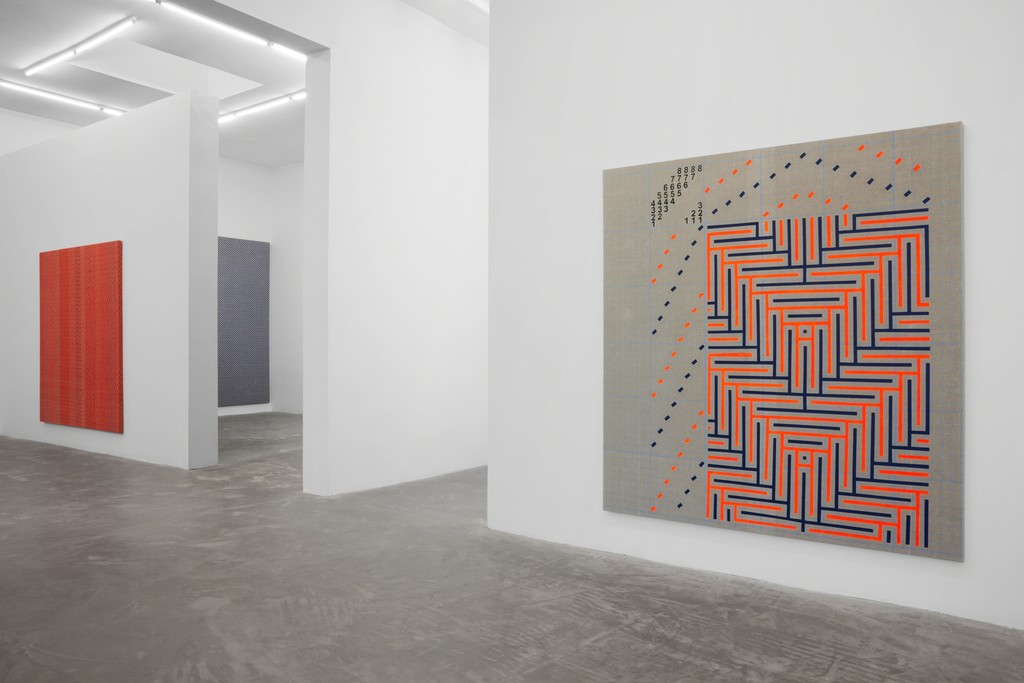 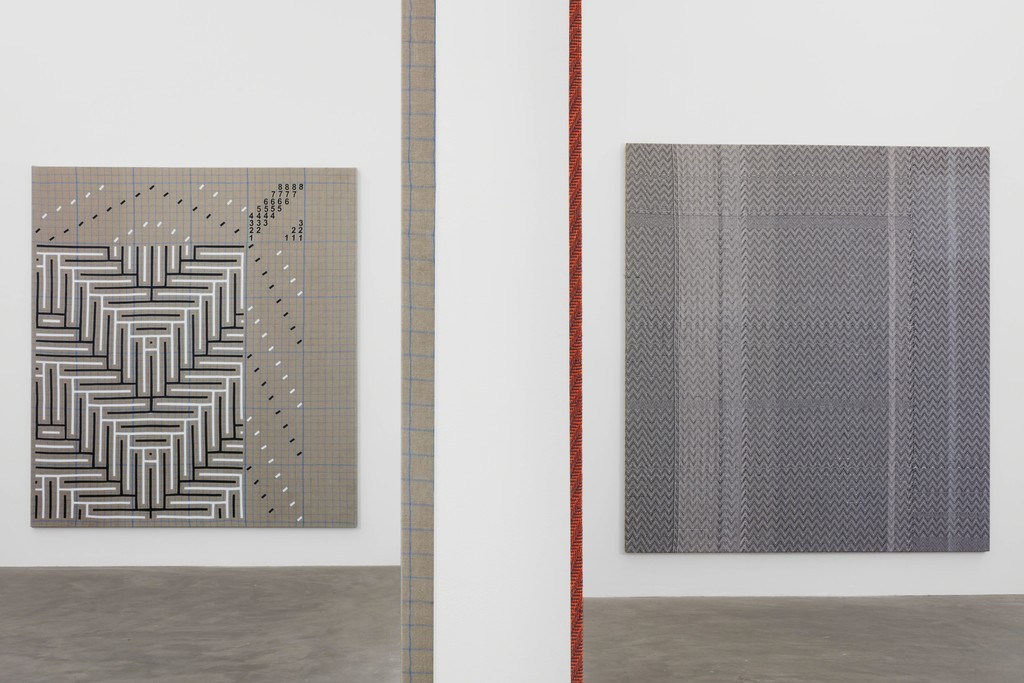 The title of the show 1D 5L 2D 6L 3D 7L 4D 8L 5D 1L 6D 2L 7D 3L 8D 4L, is a technical set of directions for foot pedal strokes on a jack loom used to make the series of works in the show known as Shadow Weaves. Cook has been investigating this traditional pattern since 2012. The name shadow weave has a double meaning in its historic usage: First, the word shadow is used to reflect a narrative account of the temporal aspect of the process, one thing after another, as the dark thread literally follows the lighter thread through the loom in the sequence of the pattern. Second, that the effect of the final result is a visual likeness of raised and recessed planes. So the singular name long used for a very traditional pattern has already within it a common space where the act of making the object and its optical effect come together as the same.

Thematically, shadows have always played a role in Cook’s works. The shadow is an indexical projection a physical body into space, a two-dimensional image of a three-dimensional object. Cook leads us to moments where the material and immaterial blur together.

Each yarn in the Shadow Weaves is painted with acrylic paint prior to being woven. This allows for the creation of a painting of sorts, but one that has been painted inside the woven fabric, rather than on it. Subtle vertical bands of difference in color are the result of variations in the density of paint applied to each thread.

There are also visual breaks in the consistency of the pattern itself, glitches that occur disrupting the repetition. These breaks in the pattern become notations of time within the studio. The disruptions are caused by either the artist becoming distracted by outside thoughts, a crying baby, a phone call or something else. When Cook returns to the weaving she doesn’t start off from where she left off, but rather starts from the beginning of the pattern. This causes these moments to become recorded into the timeline of the image. The monotony of the repetition is broken up with these moments and creates the subtle difference and specificity for each work.

The last room of the show consists of the Weaving Draft series. Weaving drafts are traditional graph paper plans that dictate the set up of a loom in order to make a weaving. The works shown here are enlarged versions of these drawings painted on a woven grid. These particular drafts depict the plans for how to weave the Shadow Weave works in the adjacent room. Each Weaving Draft work is the same size as its companion Shadow Weave piece. Painted on the grid is all the information needed to set up the loom and weave the shadow weave pattern. A final work in the room is a weaving draft of the grid pattern itself, its visual form a description of its own underlying structure.

Heather Cook (b. 1980 Dallas, TX) studied at the University of Texas in Austin and received her MFA from theArt Center in Pasadena. Cook’s work has been featured in exhibitions at the Rubell Family Collection, Miami; Rosenblum Collection, Paris; Marianne Boesky, New York; David Kordansky, Los Angeles and Galerie Art: Concept, Paris among others. Her work is held in many private and public collections such as the Hammer Museum, Los Angeles and the Rubell Family Colleciton, Miami. Cook lives and works in Los Angeles.