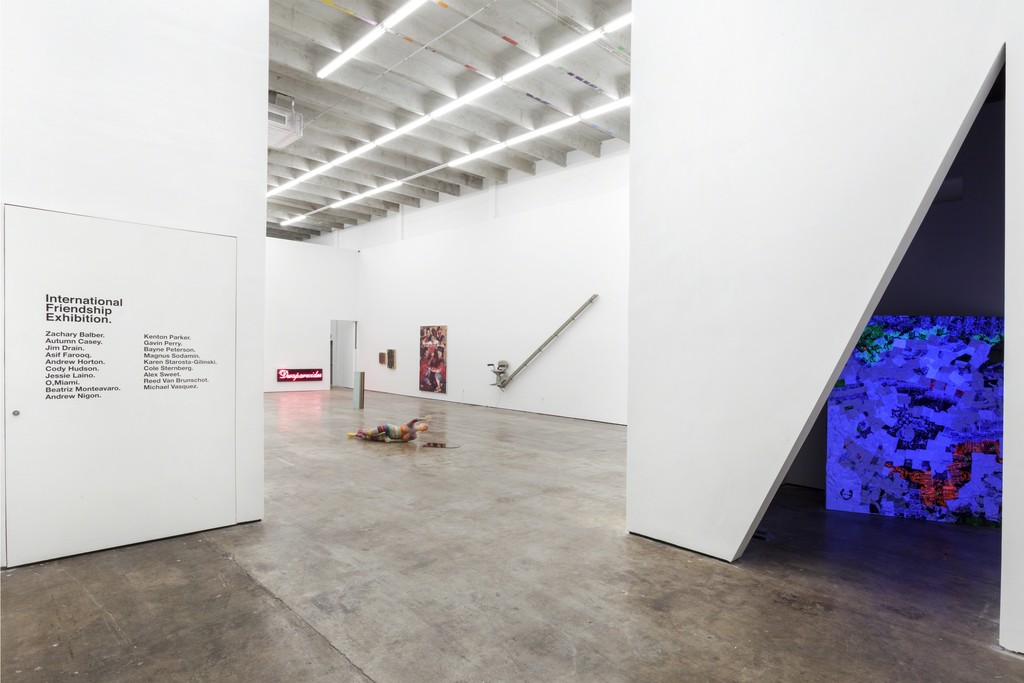 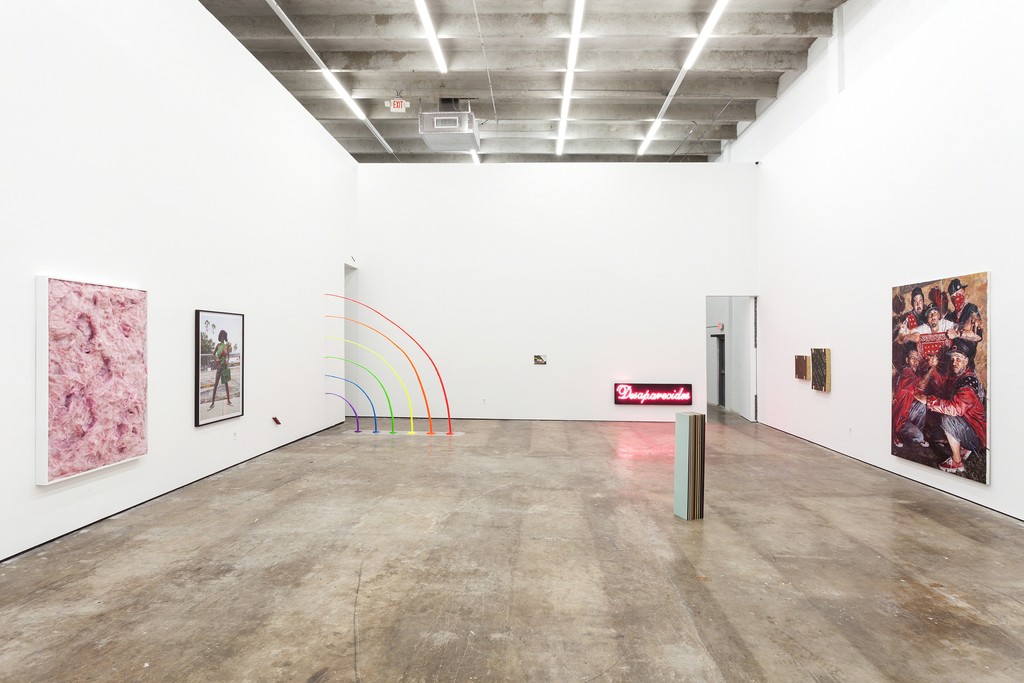 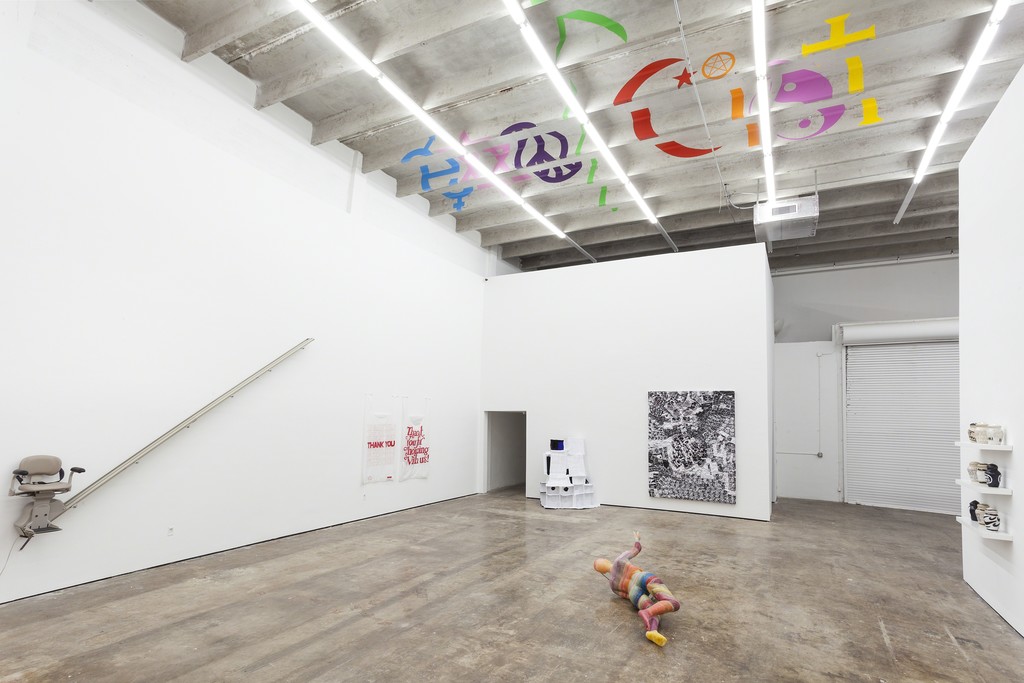 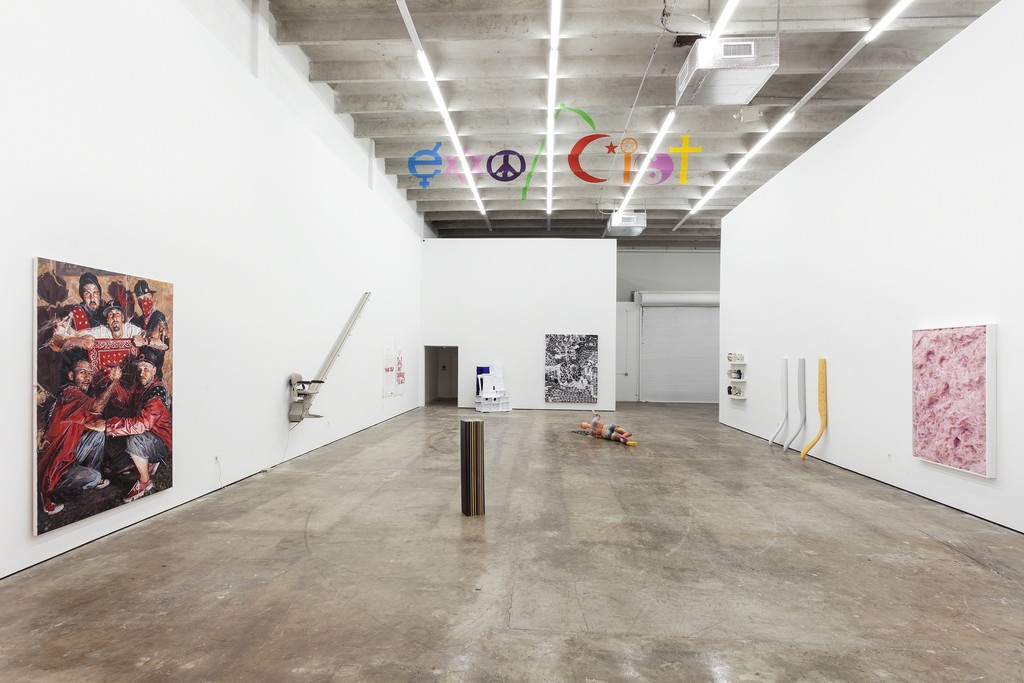 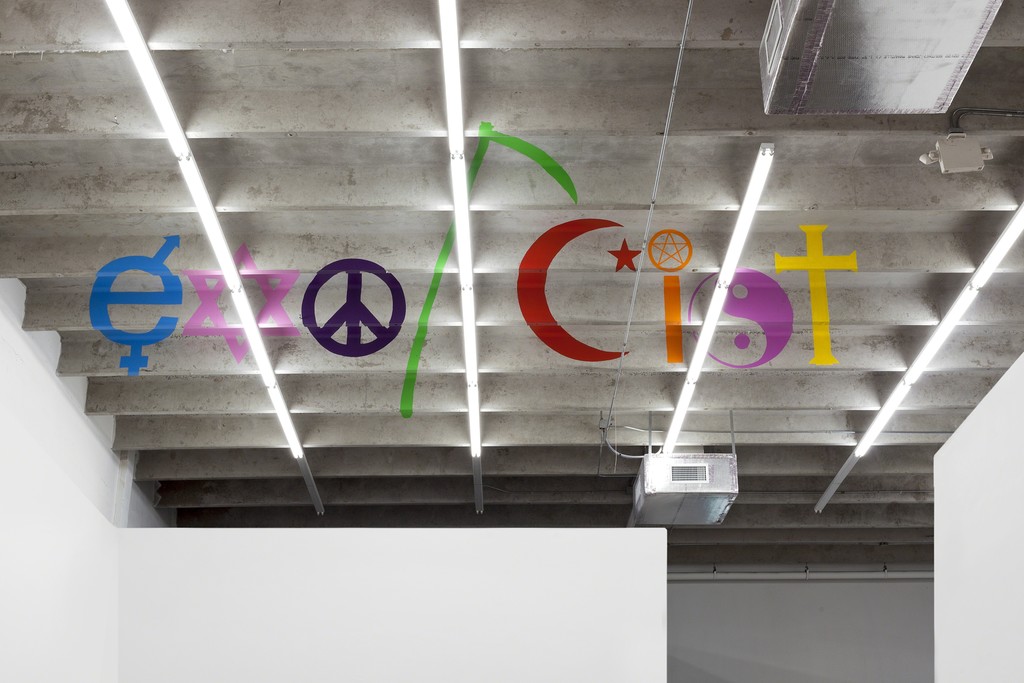 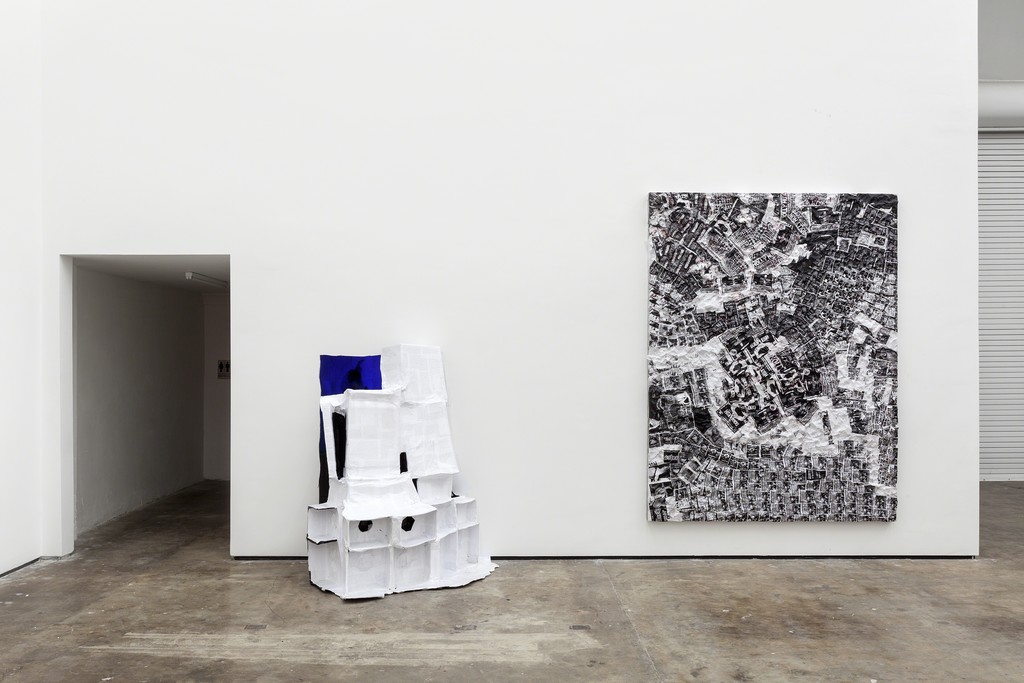 In this image, works by: Beatriz Monteavaro 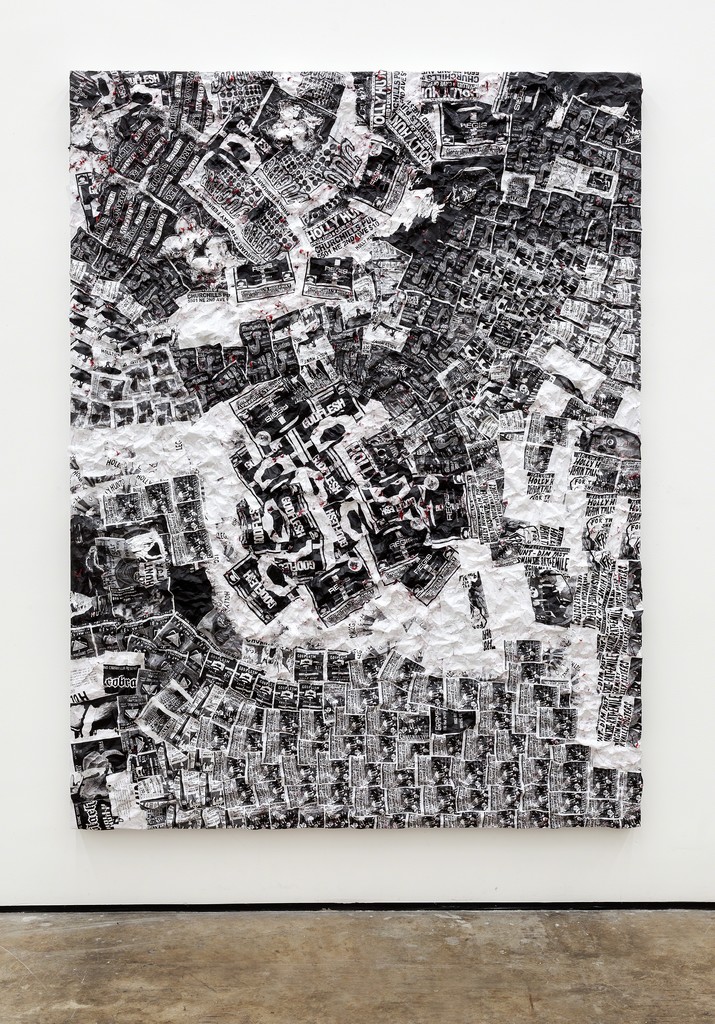 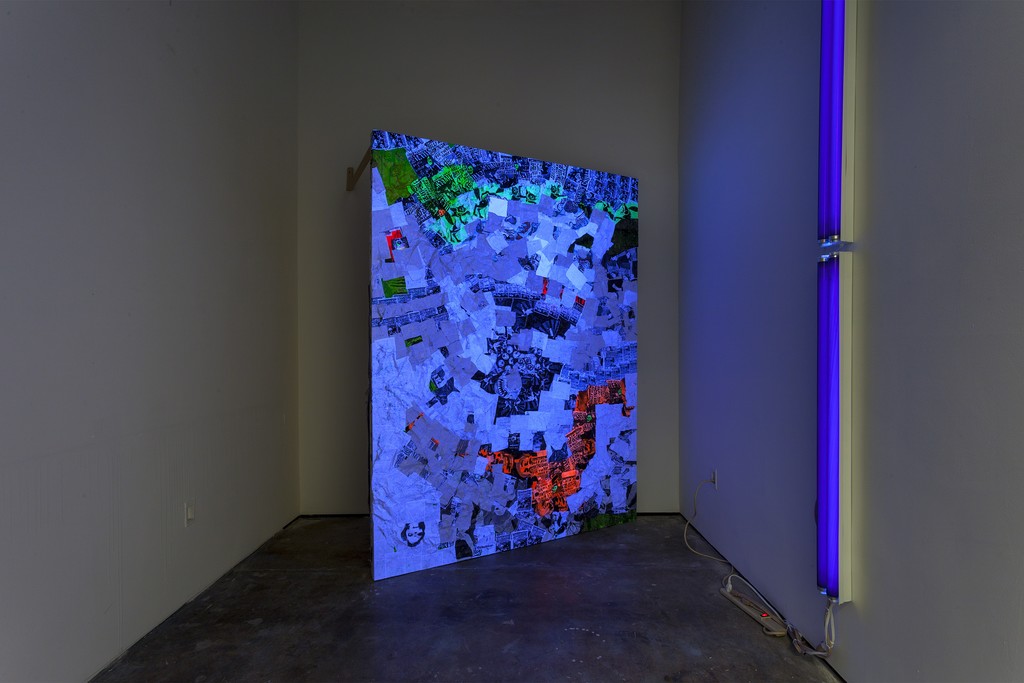 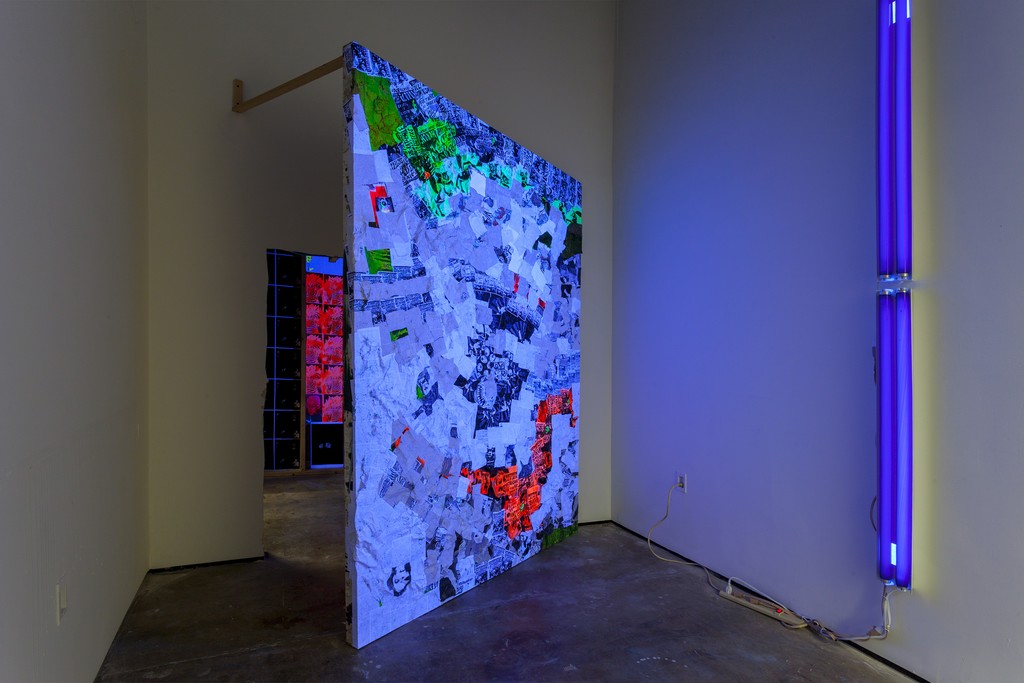 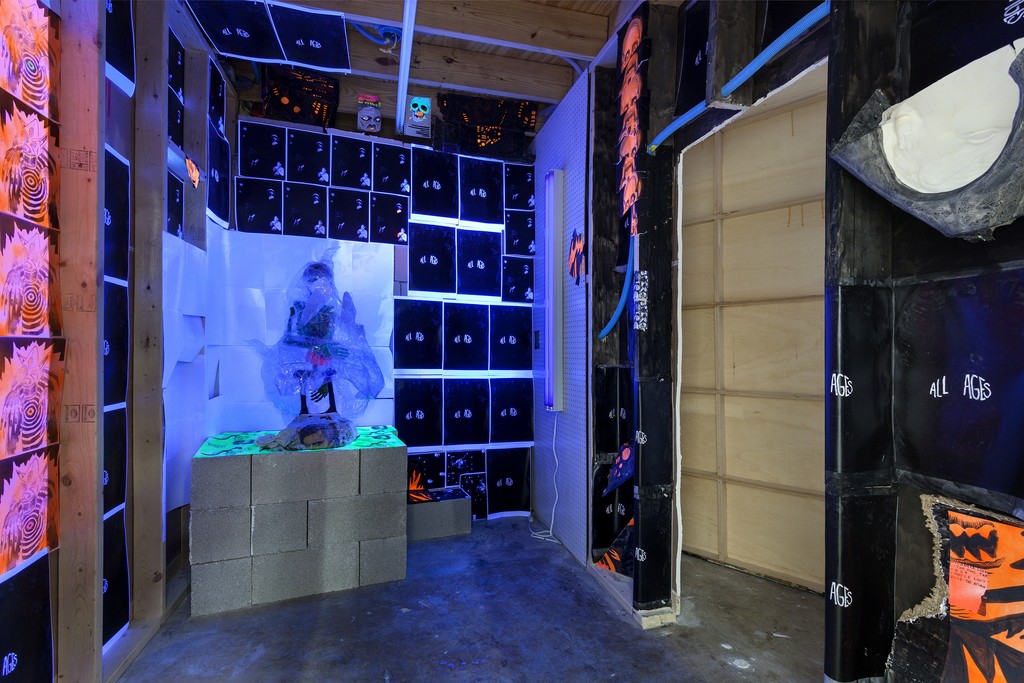 “For as opposed to it, identity is only the determination of the simple immediate, of dead Being; while contradiction is the root of all movement and life; only insofar as it has a contradiction in itself does anything move…” – Georg Wilhelm Friedrich Hegel

While gifts from the Communist party and Michael Jordan-signed basketballs are hardly fair guise for North Korea’s complex history, the interplay of tawdry and fear is a testament to the power of contradiction itself—its own history has informed the very fabric of the universe, from mathematical equations to politics and philosophy. Presenting the concept of contradiction microcosmically and sometimes self-referentially, the works at PRIMARY’s “International Friendship Exhibition” instigate an open conversation about contradiction: both in meaning and for society’s ongoing need for it.

Among the group is Cole Sternberg, whose piece features twelve 18×18” paintings of overlapping texts, accompanied by an installation containing 94 charred American flags—a simultaneously political and apolitical sentiment. Best known for his cardboard-sculpted guns, Asif Farooq steps outside this genre with neon installation Desaparecidos. Translated as “missing,” this work was created—along with a powder-coated, candied pink riot barricade—as an allusion to the persons who have disappeared in geopolitical conflicts throughout history and today. Perhaps due to their frequency, these happenings are almost accepted and normalized.

A multifaceted concept, contradiction is explored both playfully and thoughtfully in this exhibit: Autumn Casey’s centerpiece work, a metaphysical and metaphorical self portrait, features a turn-of-the-century Ferris wheel seat and invites viewers to get inside and interact. Gavin Perry’s giant rebar rainbow, Rainbows and Unicorns, examines what Perry refers to as “one of the most overused and quotidian artifices of man…Figuratively, they remain in view and yet are never reachable…[they are] fantasy and fact.” Zachary Balber’s Recomposing Sister features glamour shots of his sister, taken before her untimely death, and investigates the role of societal female objectification while reflecting on dichotomy and memory.

“While ‘International Friendship Exhibition’ is an examination of a complicated idea,” said Books Bischof, Primary Projects founder and curator, “it’s at its core a display of actual familial community, local artists and non-Miamians alike, learning from each other.”

“International Friendship Exhibition” is curated by Books Bischof, Typoe and Cristina Gonzalez of PRIMARY. Gallery hours during Art Basel are 10:00 a.m. to 6:00 p.m. daily, or by appointment with [email protected].